Josh Arieh has claimed victory in Event #66: $10,000 Pot-Limit Omaha Hi-Lo 8 or Better Championship after overcoming a field of 208 entries. Arieh grabbed hold of his fourth World Series of Poker bracelet and $484,791 after defeating Danny Chang heads-up.

After the last hand was dealt 10 hours into Day 3, Arieh was able to turn to his wife and poker friends on his rail with a huge grin on his face and his arms raised in the air.

“Having Rachel here was amazing,” Arieh told PokerNews. “She wasn’t able to be here for the first one and we really wanted to get a winner’s photo together.”

Arieh couldn’t have been any happier after falling just short of the $50,000 Poker Player’s Championship final table and coming back to win this just 48 hours later.

“It was really motivating having that play out right there. I really wanted that,” as he pointed to the Main Stage, “because of the year before when I came in second, but this is a hell of a consolation prize.”

“I’m at a better place, my personal life is as good as it’s ever been.”

In the past two weeks, Arieh has claimed three six-figure scores at the WSOP including two bracelet wins, and he credits a lot of that to his personal life. “I’m at a better place, my personal life is as good as it’s ever been. I’m willing to accept whatever happens and I just feel good.”

While Arieh is widely considered one of the best pot-limit Omaha players and his results can confirm that, the hi-lo 8 or better variant isn’t necessarily something that Arieh felt very comfortable with. “I noticed a lot of mistakes that I made, but I also noticed a lot of gameplay mistakes that they made. There was a point where they were letting me see flops when I shouldn’t see flops, they were gambling when they shouldn’t have been gambling. Just my experience in pot-limit really helped me figure out what I should be doing.”

The marathon final day began with 12 players, and was down to a final table in just over an hour.

Matt Woodward came into the day as a top-three stack, but found himself exiting in eighth before Aaron Knight and Adam Owen also hit the rail.

Jeff Gross, the king of short-stack grinding, was down to three big blinds at one point but hung in there with some timely double-ups and survived past the dinner break. However, with just a couple of big blinds left, Gross ran into Anatolii Zyrin‘s pocket aces which he could not overcome, bowing out in fifth place.

Also exiting after dinner was Dan Colpoys who ran into the red-hot Chang, who took a huge lead heading into three-handed play with over 75% of the chips sitting in front of him. However, multiple double-ups from Zyrin and Arieh brought the stacks back to even.

The two players would not back down from each other as they dealt heavy blow after heavy blow to each other but it would be Arieh who would have the last say. In the last hand of the night, the tables turned multiple times as the cards hit the felt. Arieh was in the lead on the flop, Chang found a chop on the turn, but Arieh made a wheel on the river to scoop the pot and claim the title.

Arieh talked a little bit about what it meant to him to have four WSOP bracelets to his name now. “I really want my kids to say that their dad is a Hall of Fame poker player and I knew that I had to do a lot more than I have already done. Hopefully, this run 25 years into my poker career will give me a chance.”

William Hill Wants To Give You £100 and Six Twister Tokens

Would YOU wear a balaclava this winter? 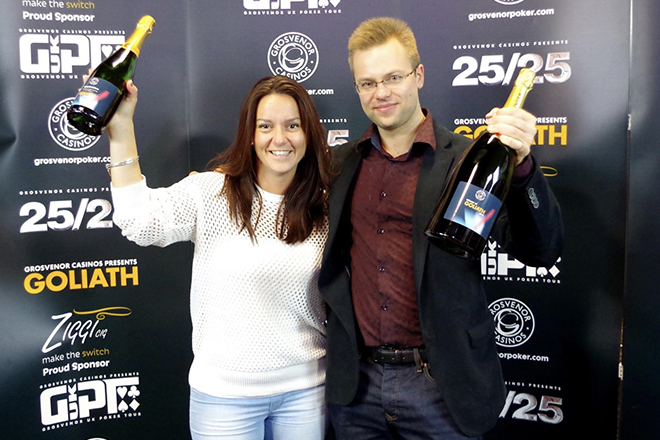