Nate Silver was thrust into the public eye when his U.S. Presidential election model correctly predicted the outcomes in all but one of the 50 states in 2008. The founder and editor-in-chief of data-driven politics and sports website FiveThirtyEight was named one of Time’s ’World’s 100 Most Influential People’ in 2009 and released a New York Times bestselling non-fiction book in 2012.

Before Silver built a media empire, however, there was a time when he was a professional poker player. His time grinding the game for a living came to an end a couple of years prior to his rise to prominence in the political sphere.

In recent years, the Michigan native has managed to take some time to revisit the poker world. He has played in a number of live poker tournaments, securing nine cashes between the summers of 2018 and 2021. Silver’s largest score had been a fifth-place finish in a $600 buy-in no-limit hold ’em event at the Venetian DeepStack Championship Poker Series for $22,737.

Card Player was able to catch up with Silver briefly on a break while he was at that final table to interview him about how he got into the game, playing $200-$400 limit hold’em online, his deep run at the series, and more.

Card Player: How did you first discover poker?

Nate Silver: I used to teach at a debate camp. I had been a high school debater. At the debate camp, all the counselors had a late night poker game. You drink beer, we actually played like stud high-low with a declare.

I kind of took it up then, shortly after college, and then I had a consulting job and my friend was like, ‘I wanna start a poker game.’ And I got kind of competitive about that, and was sort of practicing online on like Yahoo poker, which is a free site. And I was like, ‘This sucks!’ Poker isn’t very fun when there’s no money involved.’ So some online site, I think Pacific Poker, had sent me a promo for a $25 deposit bonus and whatever else. Then I just kind of ran it up from there. I ran really well in the early part of my career.

CP: What stakes and games were you playing in that period?

CP: How long was it that you were playing before you started focusing more on your media ventures?

NS: It was like from 2004 through ‘06 or ‘07. When the UIGEA passed and Party Poker shut down [their operations in the US], I started losing money playing limit hold’em. I think I was probably running bad, but the games dried up really fast. Instead of learning no-limit, I just kind of quit and started working on FiveThirtyEight.

CP: Have you been able to keep your finger on the pulse of the poker world a bit while focusing on your work as a journalist and author?

NS: The past three years or so, I’ve really made an effort to, [keep up with the poker world], in part, because I really enjoy poker. I enjoy the people I meet in poker. You know, you work really hard at your job and, and you’re trying to have some work-life balance. Playing in tournaments with my friends is part of that balance for me. It also keeps you sharp, right? It’s hard work playing a tournament like this. You come home pretty exhausted. But yeah, I’m kind of right on that fringe between like an amateur, but also a former-professional poker player.

CP: You have played more tournaments this year, with four cashes prior to locking up your career-high score in this event. Have you just been playing home games to stay sharp or do you watch training videos or read strategy books?

NS: During the pandemic we had a couple of zoom games that would go pretty regularly. I’ll play online occasionally. I mean, with the pandemic, there was a lot of time sitting at home, right? So, I was playing a fair bit of online poker. I much prefer live, though. I feel like I play a lot better live. I learn more live. It’s fun to start to pick up situational reads and stuff like that. I hope this is like a pretty big part of my life for the foreseeable future for sure.

CP: Can you tell me about your experience in this tournament, making a career-best score on a live-streamed final table under the bright lights?

NS: It’s definitely fun. I played recently on Poker After Dark, and the episodes have not aired yet. It was very good in terms of like… you know that when you’re on TV you’re kind of under a microscope.

I also played an Aria $10k event. I played those in part because the first time you actually do make a final table, then you’re kind of used to the mechanics of playing poker on TV. The thing about poker is like, if you start playing to look good on TV, then you’re probably not playing optimally, especially in limit hold’em where you have to make really thin call downs and really thin bluffs if you have the right odds, right? You have to defend your big blind pretty widely. And so you look kind of foolish, because you’re wrong like 80 percent of the time, but you might only have to be right 10 percent of time to turn a profit. So, I’m try to not let it phase me too much.

CP: I’ve heard that you’re working on a new book that’s related to the mindset of successful gamblers. Would you say that your recent play has anything to do with research, or has this just happened to coincide with the project?

NS: I’ve met people like Jason Somerville, who I talked to in my book, and now
I’ve played a bunch of tournaments with him in this last week. You get more ingrained in the community if you’re not just an outsider, but actually a participant.

But at the same time, I definitely enjoy [playing] for its own merits. I think I’m skilled enough where I’m at least not negative EV. We can debate how positive EV I am or not. So, it’s multiple things at once.

Also, there probably won’t be a lot of times when I can play five weeks of the World Series of Poker straight through. Election years are pretty much out of the question, and I sometimes have other major projects. It’s kind of been a lifelong dream to just play the whole series through.

For more from the 2021 WSOP, visit the Card Player World Series of Poker landing page. 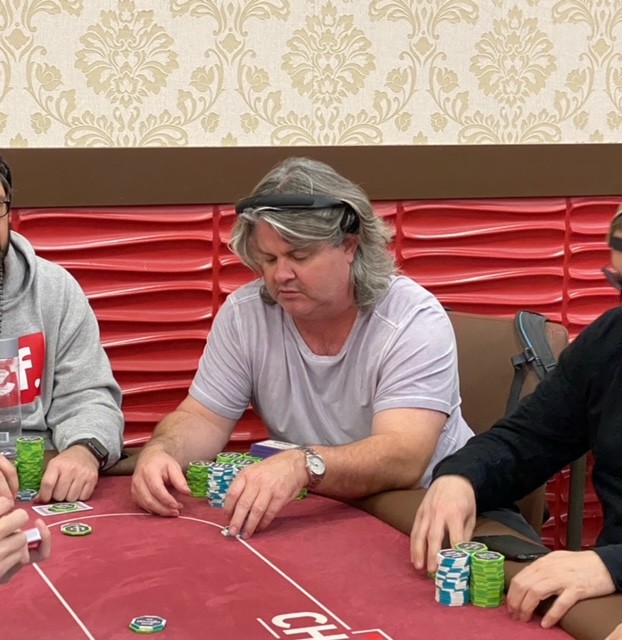