All eyes were on Michael Addamo when the latest GGPoker Super MILLION$ final table kicked off. The super-talented Australian sat down at the tournament’s chip leader and looked set to become the event’s champion for the fourth time.

Addamo fans were left disappointed, however, after two-time Brazilian WSOP champion Yuri Dzivielevski came from sixth-place to take down the tournament and deny Addamo yet another victory.

Connor Drinan finished ninth the last time he reached a Super MILLION$ final table, which is where he finished this time around. The action folded to Drinan on the button and he ripped it in for nine big blinds with ace-four. Thomas Muehloecker called in the big blind with king-queen, flopped a king, and sent Drinan to the showers.

Aliaksei Boika, who was also at the final table of the partypoker WPT50 Knockout, was the next player eliminated. Addamo min-raised to 170,000 from the cutoff, leading to boika inexplicably three-betting all-in for 1,910,920 with ace-four of clubs from the small blind. Addamo decided his pocket eights were worthy of a call. The eights held and Addamo’s stack swell to more than 8.2 million, 2.5-times more than any other player at the final table.

Seventh-place and the last five-figure prize of the evening went to Austria’s Chris Puetz. Thomas Muehloecker min-raised with king-eight of clubs before calling Puetz’s 6.5 big blind jam with ace-jack. Muehloecker flopped a flush draw, which came in on the river.

Muehloecker was the next player out of the door, busting in what was a cooler hand. The Austrian opened the betting with a min-raise to 160,000 with pocket queens. Addamo three-bet to 680,000 with aces from the small blind and Muehloecker called. A queen-high flop gifted Muehloecker a set. Addamo led for 376,000 and was called. The four of clubs turn saw Addamo bet again, this time 903,160. Muehloecker called once more. The ace of clubs river locked up the hand for Addamo, and he made a tiny bet of 408,000 into the 4,058,320 pot. Muehloecker responded with an all-in bet of 2,375,923, which Addamo called. Muehloecker called off his stack and crashed out in sixth, leaving Addamo with 13.5 million of the 20,030,000 chips in play.

“DrMikee” was on life support at this point, so it was no surprise to see him head to the rail in fifth place. Addamo min-raised to 160,000 with seven-four of diamonds before calling when DrMikee three-bet all-in with king-jack for 604,164. DrMikee flopped two pair, but the seemingly unstoppable Addamo hit runner-runner diamonds for a flush!

Joao Vieira busted in fourth shortly after DrMikee and it was Addamo, again, who did the damage. Vieira opened with a limp with pocket aces from under the gun, allowing Addamo to see a free flop from the big blind with his king-jack. The flop fell, you guessed it, with both a king and a jack. Addamo check-raised Vieira’s 100,000 continuation bet to 350,000, and Vieira called. The six of diamonds turn was greeted with a 500,000 bet from Addamo, and a call from Vieira. The nine of diamonds river put three diamonds out there, but it did not deter Addamo. He set Vieira in for his 1,303,571 stack, Vieira called and busted in fourth-place.

From Zero To Hero

Dzivielevski only had eight big blinds when play was three-handed, yet he made it to heads-up. A round of applause has to be directed at Isaac Haxton who started the final table eight in chips, but navigated his way to a third-place finish.

Haxton fell by the wayside at the hands of Addamo, who min-raised to 200,000 with king-jack, before calling the 1,128,808 shove from Haxton, which he made with the dominated jack-ten of spades. Haxton turned a plethora of outs, but they all missed on the river.

Addamo went into heads-up holding a massive 16,263,326 to 3,866,674 chip lead over Dzivelevski and that fourth Super MILLION$ title looked all but guaranteed. Dzivielevski had other ideas, however, and began mounting an epic comeback.

The Brazilian’s stack dwindled, but he doubled with aces versus pocket fives to see his stack return to the levels at the start of the one-on-one battle. He made an excellent call to catch Addamo with his hand in the cookie jar, which turned the fight on its head.

Addamo pulled ahead once again, yet could not quite shake off Dzivielevski. The turning point came when Dzivielevski shoved on the turn with the board reading

and Addamo called with

The final hand took place during the 80,000/160,000/20,000a level, and saw Addamo open to 336,000 with queen-ten. Dzivielevski looked down at pocket jacks and made it 1,040,000 to call. Addamo called. A nine-high flop with two clubs saw both players check. The turn was the ten of spades. Dzivielevski checked again, leading to Addamo betting 1,060,000, leaving 2,360,844 chips behind. Those chips went into the middle when Dzivielevski check-raised all-in. Addamo needed some help on the river, but the king of hearts did not provide it.

A superb victory for Dzivielevski, one worth $408,406, and a runner-up finish for Addamo. 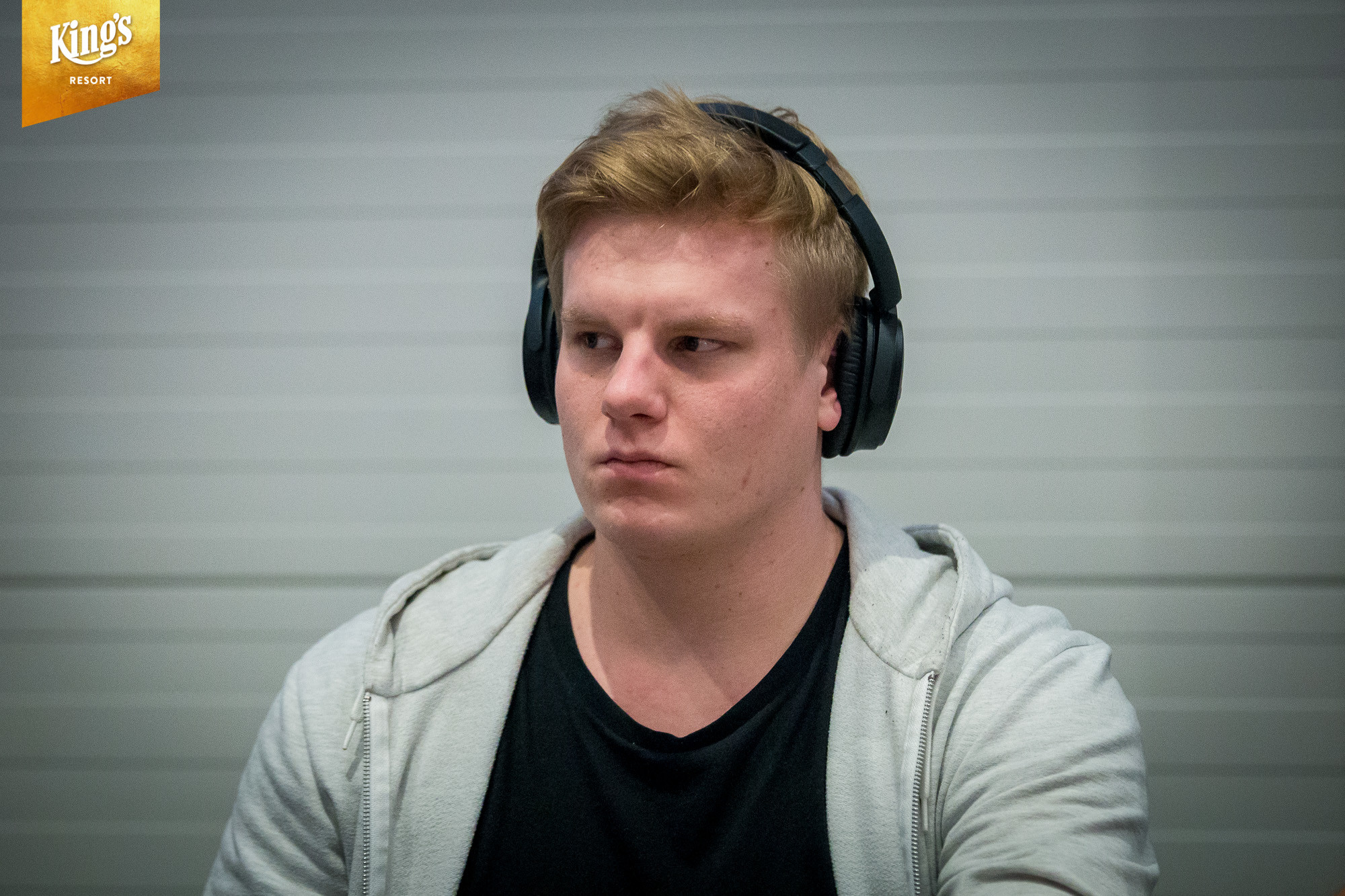