While “High Stakes Poker” may be no more for the moment with the conclusion of the latest season, that doesn’t mean the PokerGO Studio has closed up shop on high-stakes action.

“Poker After Dark” aired its latest episode on Monday, featuring $50/$100 no-limit hold’em with a $100 big blind ante and the title “Not About Nick,” a reference to sometime commentator Nick Schulman who moved from the booth to the felt. Tons of hands were crammed into the 45-minute episode, which you can watch in full at PokerGO.

In lieu of that, here are a few highlights from the show, which featured bluffing and straddling aplenty, and consequently didn’t lack for action.

With the straddle on, Matt Berkey opened for $600 in the cutoff with

and Terry Fleischer reraised to $2,100 holding

on his left. James Bord called with

in the big blind and everyone else cleared out.

but nonetheless check-called a small bet of $1,100. He found a backdoor draw on the

that left him drawing dead, but he bet out $3,000. Fleischer slid in three stacks of chips to call, and he had only about $3,500 left to play on the

Bord gave it up after missing and folded to Fleischer’s jam.

Schulman opened for $400 in the cutoff with

on the button. Jeremiah Williams woke up with

Only Bord continued with him to the

flop. Williams continued for $4,000 and the bet had barely been released before Bord said he was all in. He had about $17K in his stack with Williams covering.

“Come on, you didn’t even think about it,” Williams said with a smile.

“I don’t mind what you do,” came the response.

Williams pursed his lips and folded after a moment, and Bord showed.

“Argh, I’m the worst player ever,” Williams said with a shake of the head.

Schulman opened under the gun for $400 with

, Bord called on his left with

They went three ways to

for that price and Ball continued for $2,000. Only Schulman peeled, and the

checked through to a

Fleischer Runs into the Blades

Action folded to the button, where Williams opened for $300 with

flop. Fleischer liked it enough to open-jam for $7,025 and Williams quickly called, offering to run twice and saying he had aces.

“Once is fine,” Fleischer said with a defeated smile. “If I get lucky, I get lucky.”

He did not, as Williams ran out a wheel to boot and scooped a $22,800 pot, forcing Fleischer to reload.

The players agreed early on to run what’s known as the seven-deuce game, meaning anyone who won with poker’s acknowledged worst hand would earn an extra payoff from everyone else.

A relevant moment came up with Bord opened for $300 with

and Bord immediately announced all in. He had about $18K left and Ball quickly dumped his worthless hand.

“Pay me,” Bord said, flipping over his rags.

Everyone tossed over what looked to be $1,500, making for a handsome payout for the blasting Brit. 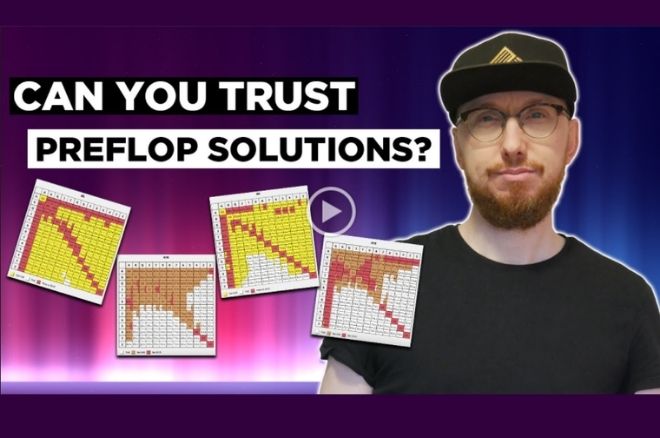 How Much Can You TRUST Your Preflop Solutions?