A Colorado woman with stage-5 renal failure says she will not get the Covid-19 vaccine because of her religious beliefs – despite her refusal meaning that she will be denied a life-saving kidney transplant.

Both Leilani Lutali, 56, and her friend and potential donor Jaimee Fougner, 45, have refused to get the vaccine, siting their religious beliefs.

The University of Colorado Health hospital informed  that would be placed on a waiting list for ‘non-compliant by not receiving the COVID-19 vaccine.’

They were given 30 days to begin the vaccination process or be removed from the kidney transplant list.

Born-again Christian Lutali has refused to get inoculated because of the use of stem cells in developing some vaccines.

‘As a Christian, I can’t support anything that has to do with abortion of babies, and the sanctity of life for me is precious,’ Lutali said.

Cells taken from elective abortions have been used to develop effective vaccines since the 1960s including current vaccines for rubella, chickenpox, hepatitis A, and shingles.

None of the COVID vaccines contain aborted fetal cells, like some social media users have been falsely claiming. But they did utilize fetal cell lines in their development.

Fetal cell lines are derived from fetal cells collected from abortions performed in the 1980s, which have been replicated for decades and are now thousands of times removed from the initial fetus cells.

Leilani Lutali, 56, who has stage-5 renal failure has been denied a life-saving kidney transplant because she and her prospective donor are unvaccinated due to religious beliefs 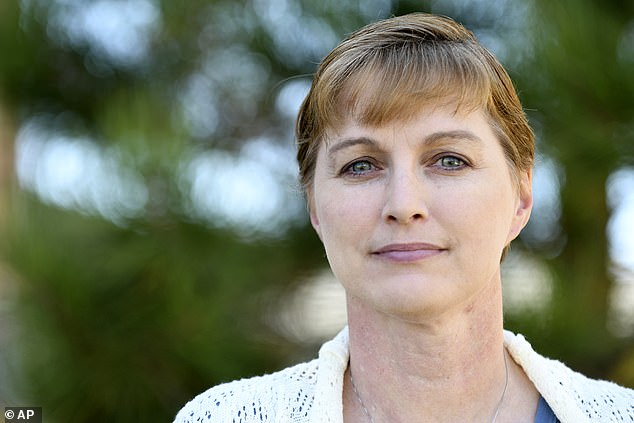 ‘It’s your choice on what treatment you have. In Leilani’s case, the choice has been taken from her. Her life has now been held hostage because of this mandate,’ said Jaimee Fougner, 45, who met Lutali in a bible study and decided to donate her kidney to her friend

While many people refusing the vaccine have cited religious and Christian beliefs, the Vatican said that it is ‘morally acceptable’ for Catholics to get vaccines that utilized research of fetal cells.

Pope Francis went so far as to say that not getting the vaccine is ‘suicide.’ He has been fully vaccinated with the Pfizer vaccine.

But Roman Catholic leaders in New Orleans and St. Louis went so far as to call Johnson & Johnson´s COVID-19 shot ‘morally compromised.’ J&J has stressed that there is no fetal tissue in its vaccine.

Lutali hit out at  UCHealth, claiming that they have altered their position on vaccine requirement in the last few months.

According to UCHealth, located in Aurora, the majority of transplant recipients and living donors are now required to be vaccinated to avoid organ rejection.

‘At the end of August, they confirmed that there was no COVID shot needed at that time,’ Lutali said. ‘Fast forward to September 28. That’s when I found out. Jamie learned they have this policy around the COVID shot for both for the donor and the recipient.’ 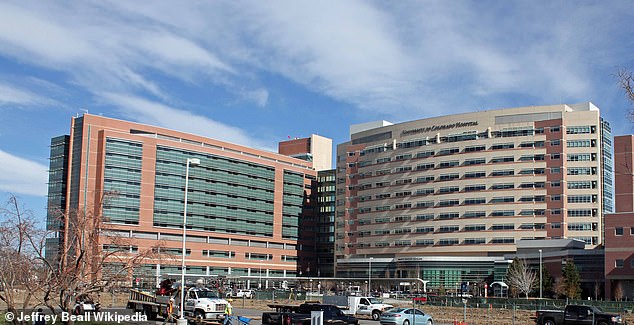 The University of Colorado Health hospital in Aurora is requiring all organ transplant patients to be vaccinated. Medical centers throughout Colorado, Washington, Vermont, Massachusetts and Alabama have set the same guidelines 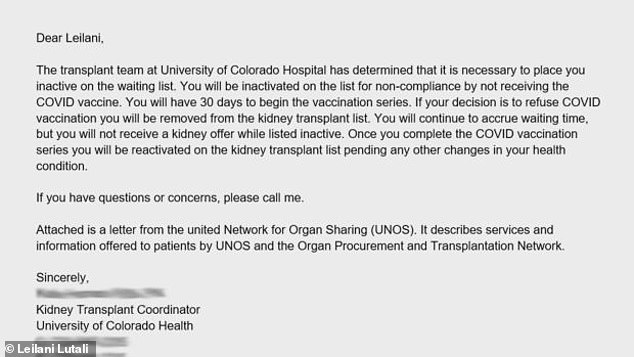 The UCHealth hospital denied Leilani Lutali the chance to get a new kidney because of her unvaccinated status. She is currently listed as inactive on the organ waitlist 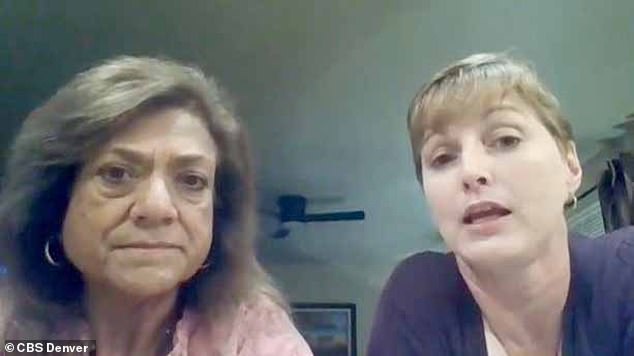 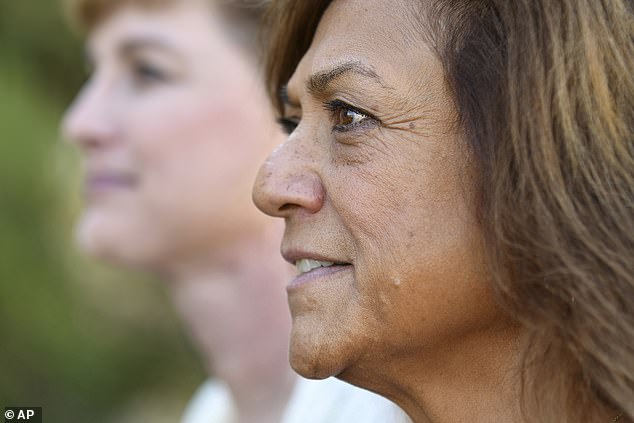 UCHealth Spokesperson Dan Weaver said the hospital would not comment on any specific case, but said it was common for transplant patients to be asked to meet specific conditions before, during and after surgery.

Weaver wrote in a statement: ‘For example, patients may be required to receive vaccinations including hepatitis B, MMR and others.

‘Patients may also be required to avoid alcohol, stop smoking, or prove they will be able to continue taking their anti-rejection medications long after their transplant surgery. These requirements increase the likelihood that a transplant will be successful and the patient will avoid rejection.’

Weaver added that transplant patients who are not vaccinated against COVID face a higher mortality rate of 20 to 30 per cent.

‘Should they become infected, they are at particularly high risk of severe illness, hospitalization and death,’ Weaver said.

‘A living donor could pass COVID-19 infection on to an organ recipient even if they initially test negative for the disease, putting the patient’s life at risk.’

The American Hospital Association, which represents nearly 5,000 hospitals, health care systems and networks in the United States, said that while it did not have data to share on the issue, many transplant programs insist that patients get vaccinated because of the weakened state of their immune system.

Any type of surgery is likely to weaken a patients immune system, but organ transplant surgeries are particularly tough due to the drugs they are required to take to suppress the immune system to keep the body from rejecting the new organ.

Lutali is now searching for another hospital, possibly in Texas or Florida, to perform the essential procedure as her kidney’s near failure.

The life expectancy for those with stage-5 kidney failure is about five to 10 years while on dialysis treatment, according to the National Kidney Foundation.

An estimated 17 people die every day waiting for an organ.

‘It’s your choice on what treatment you have. In Leilani’s case, the choice has been taken from her. Her life has now been held hostage because of this mandate,’ Fougner told CBS. 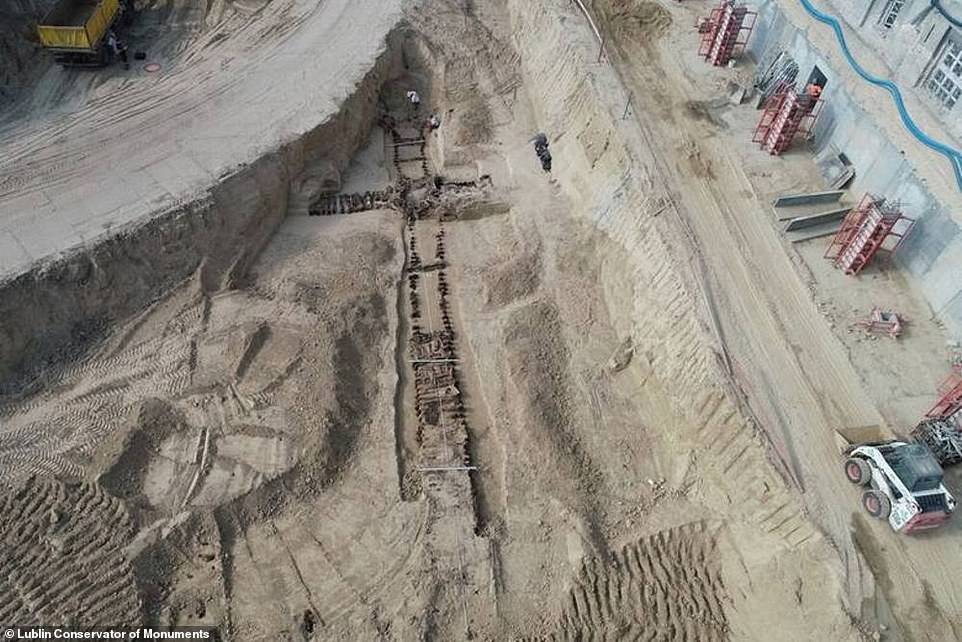 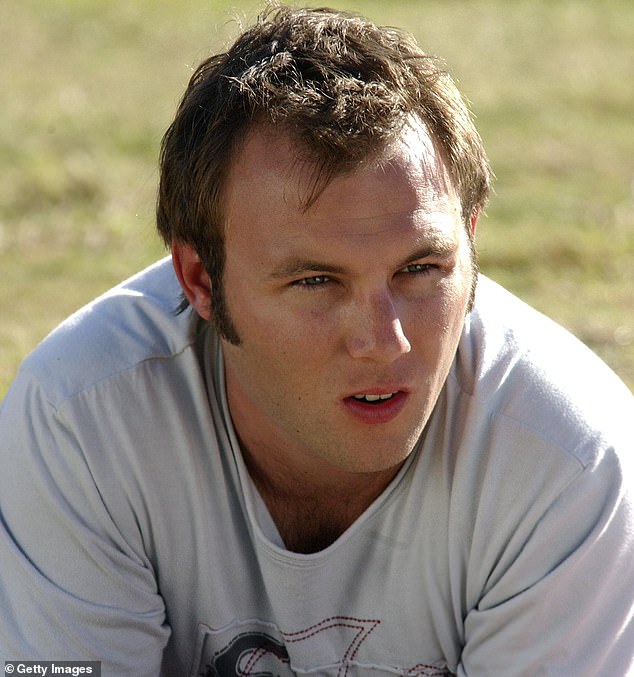 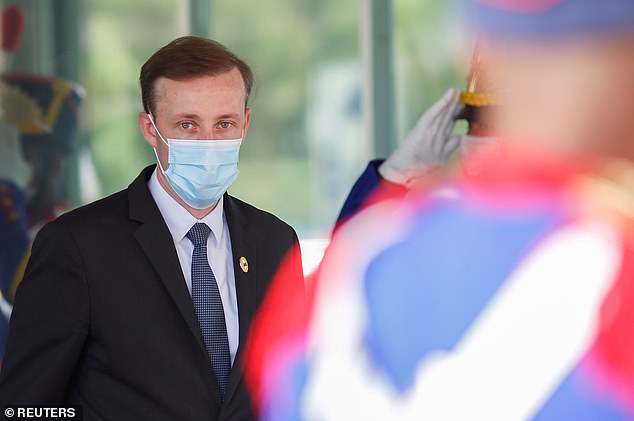 RFK Jr. hammered by Auschwitz Memorial for Holocaust analogy about vaccines
26 mins ago