Woke Hollywood sure has the most warped priorities.

For the first 147 minutes of the most effed up Oscars ceremony in history, the fast dwindling millions of viewers were treated to a smorgasbord of preaching about politically correct causes and take downs of everything the left so despise about America today.

The full uncensored Will Smith vs Chris Rock moment as broadcast outside the US.
Will Smith was laughing initially but then appeared to snap… pic.twitter.com/TitPw4EQTy

By contrast, trans rights, Hollywood’s gender pay gap and Texas voting rights were just a few of the typically far-left causes ‘joked’ about on what was once was the biggest night in entertainment, despite promises by organisers to avoid descending into the woke dogma that drove ratings to a record low last year.

But then Will Smith slapped Chris Rock in the face for making a joke about his wife Jada Pinkett Smith – beautifully bald at the ceremony after revealing her battle with alopecia ­– starring in GI Jane 2 and any sense of what’s right seemed to go out the window.

There was no moral outrage; no sense that a crime had just been committed on stage; no explanation to the children watching on TV sets live around the world that violence should never be the answer to even the most offensive of comments.

One could be forgiven for thinking you were watching an elaborately staged skit to begin with, given Rock’s casual reaction to Smith’s slap and his quick-witted retort: ‘Will Smith just smacked the s*** out of me.’

But when Smith returned to his seat and screamed twice, ‘Keep my wife’s name out of your f***ing mouth,’ it was clear that the La La Land/Moonlight winning envelope mix up was no longer the most controversial moment in Oscar history.

You would imagine the uber politically correct audience, so big on social justice issues, would have been up in arms about the crime they’d just witnessed?

Nope, quite the opposite. Smith, far from being dragged away by security, was about to become the toast of Woke Hollywood.

He was awarded the Best Actor Oscar just 43-minutes later and the on-stage physical assault of a fellow black man seemed not to have mattered one jot.

There were massive cheers; tears from many of the celebrities in attendance; even a standing ovation, despite the fact Smith made no direct apology to Rock for the slap seen around the world and seemed more concerned about whether he’d be invited back to the Oscars in the future.

Now, I understand why there is some sympathy for Will Smith in this situation.

Having met him, I can vouch for the fact he is one of the nicest blokes in Hollywood, resolutely down to earth, with time for everyone, unlike most of the A-list w***er actors I usually encounter.

Many will believe Smith showed old fashioned chivalry for standing up for his wife.

And Rock, a scathing comedian, has long had the Smith’s in his sights at the Oscars.

The feud dates back to his hosting gig in 2016 when Jada refused to attend the ceremony because of what she saw as a lack of diversity. Rock joked on stage: ‘Jada boycotting the Oscars is like me boycotting Rihanna’s panties. I wasn’t invited.’

Two years later, when Smith posted an Instagram birthday tribute to his ex-wife Sheree Zampino, Rock continued the feud by commenting: ‘Wow. You have a very understanding wife.’ 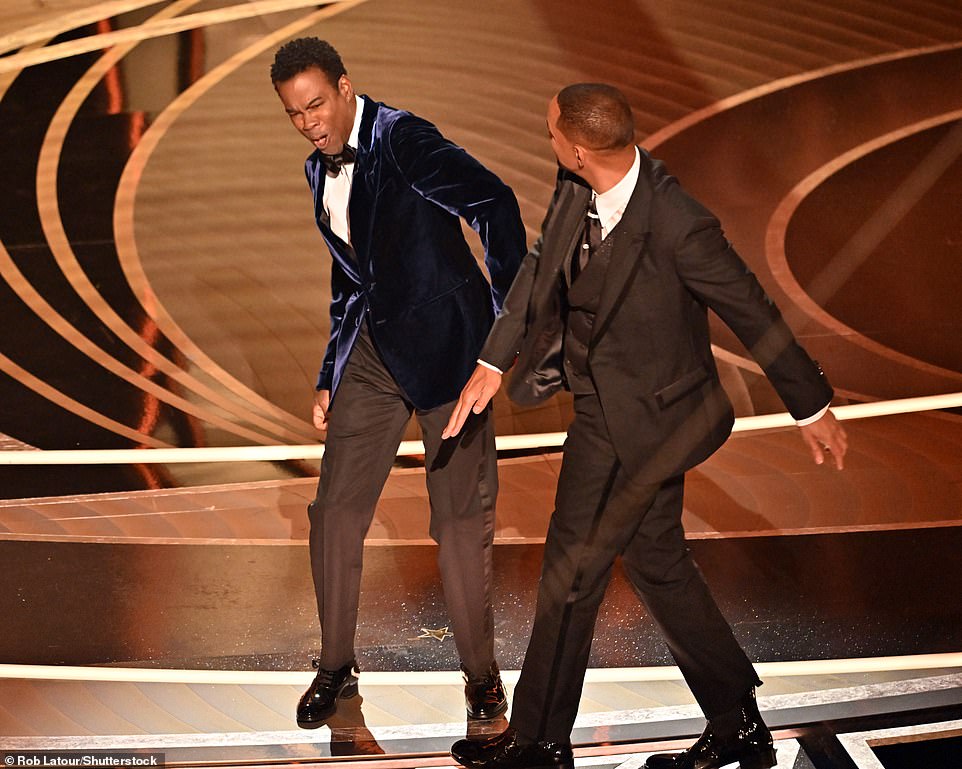 Smith, far from being dragged away by security, became the toast of Woke Hollywood for his attack on Rock at the Oscars

The joke tonight didn’t initially appear to upset Will who laughed along as Rock said: ‘Jada, I love ya. GI Jane 2, can’t wait to see it.’

As the couple became more agitated before Smith took to the stage, Rock tried to appease them by laughing: ‘That was a nice one, OK.’

In the ad break following the assault, there seemed to be no official attempt to intervene or reprimand Smith.

Instead, he was given a pep talk by Tyler Perry and Denzel Washington, who told him: ‘At your highest moment, be careful, that’s when the devil comes for you.’ He was then hugged by Bradley Cooper.

As he took to the stage after winning his Oscar to deliver a rambling and emotionally charged acceptance speech, Smith linked his behaviour to his time playing the part of Venus and Serena’s father Richard Williams, who he described as a ‘fierce defender of his family’. 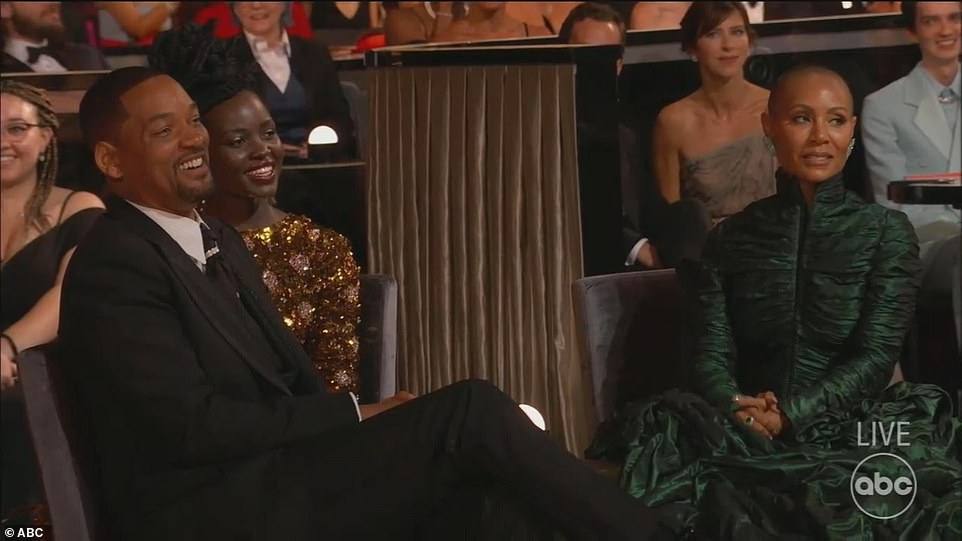 Smith then apologised to the Academy and his fellow nominees, but crucially not Rock, the man who he had hit.

And despite just assaulting a man on live TV, Smith farcically suggested he wants to become a ‘vessel for love’ and ‘ambassador for love and care and concern’.

In his final stand, he concluded: ‘Art imitates life – I look like the crazy father, just like they said about Richard Williams. But love will make you do crazy things.’

Sadly, that’s not good enough. Love can never justify an unprovoked physical assault on someone making a mildly inappropriate joke about your wife. 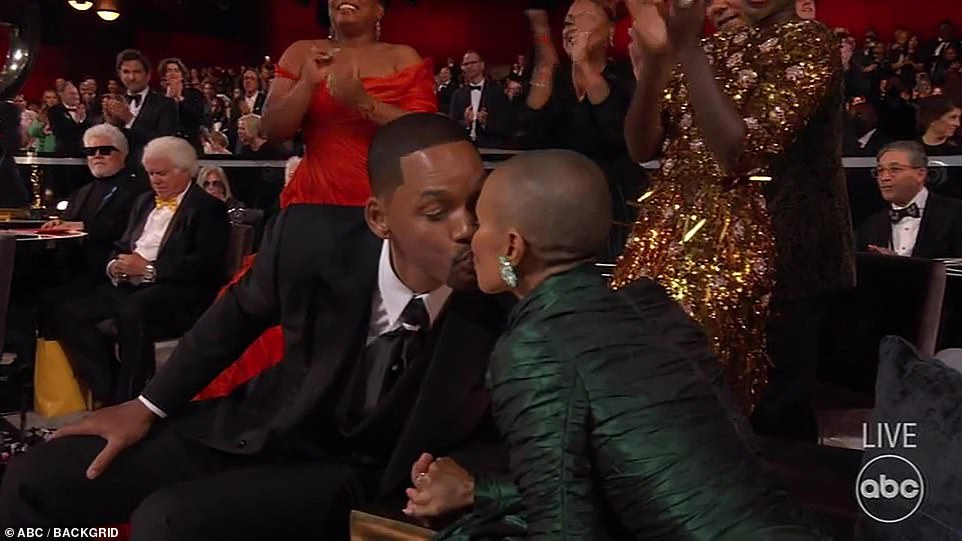 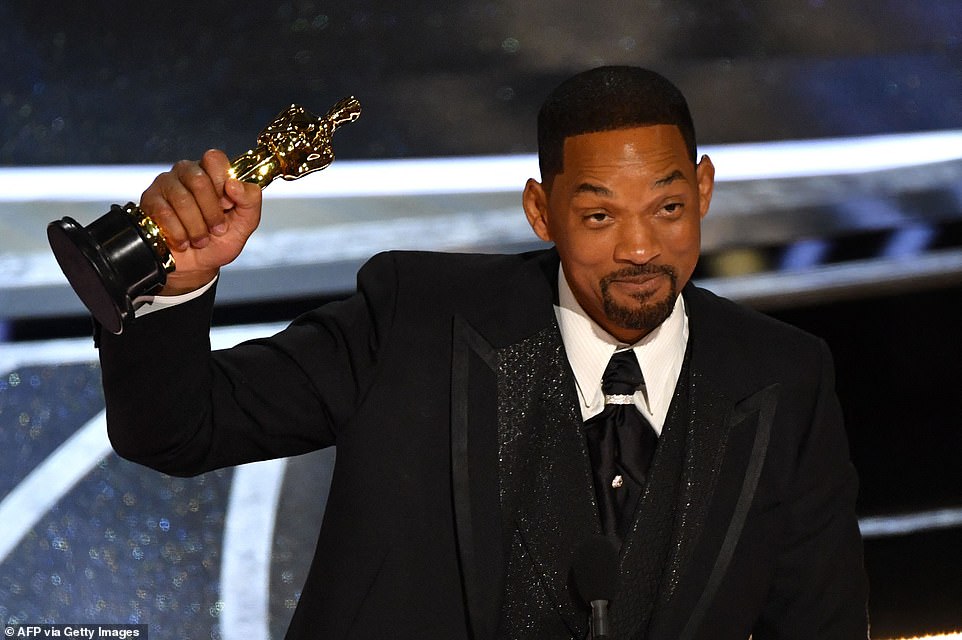 Remember, this is the same man who in 2015 returned to his hometown of Philadelphia to march against violence.

By the way, I want to stress that I am not calling for the cancellation of Will Smith. Unlike those on the left, I believe even the most famous folk have to be able to make very public mistakes and seek redemption.

But in order to do that Smith must first admit that his anger did not justify an assault on Rock and he should fully apologise to the comic, who has been incredibly graceful by refusing to make a complaint about the incident to the LAPD.

Just imagine the reaction if it had been a white actor who attacked Rock. I don’t believe Hollywood stars would be lining up to defend Smith on the red carpet at Oscar after parties, as they have been today.

Shame on the Oscars bosses which refused to directly condemn Smith, releasing a wimpish statement that read: ‘The Academy does not condone violence of any form. Tonight we are delighted to celebrate our 94th Academy Awards winners, who deserve this moment of recognition from their peers and movie lovers around the world.’

Believe it or not, that wasn’t the only stark example of rank Hollywood hypocrisy at the Oscars.

Pre-slapgate, co-host Regina Hall had dragged onto the stage four male celebrities who she fancied ­– Bradley Cooper, Tyler Perry, Timothee Chalamet and Simu Liu – to subject them to what would be considered obvious sexual harassment if the genders were reversed.

As they stood in a line next to her to widespread laughter from the audience, Hall told them: ‘You’re going to need a deep PCR test. It’s going to be a typical quick Covid test – you’ll come backstage, take your mask off if you have one – and your clothes ­– and I’m going to swab the back of your mouth with my tongue. And we’re just going to do some other freaky stuff, which I will record for Academy protocol.’

Then, going one step further, she did physically pat down the next two male presenters who walked on stage ­– Josh Brolin and Jason Mamoa – literally feeling up their upper thighs and bums as part of her ongoing gag about wanting to find a man.

Now I’m all for this sort of outrageous physical comedy, but it’s the hypocrisy of the wokest audience in the world thinking the crude sexual exploitation of men is fine, when such treatment of women by a man, even in the context of a joke, would be considered a cancellable offence.

Just imagine if an equally outrageous male comedian like Ricky Gervais had picked four young female actresses from the audience who he fancied and made them listen to a lengthy sexually provocative come on, before feeling up two female award presenters. 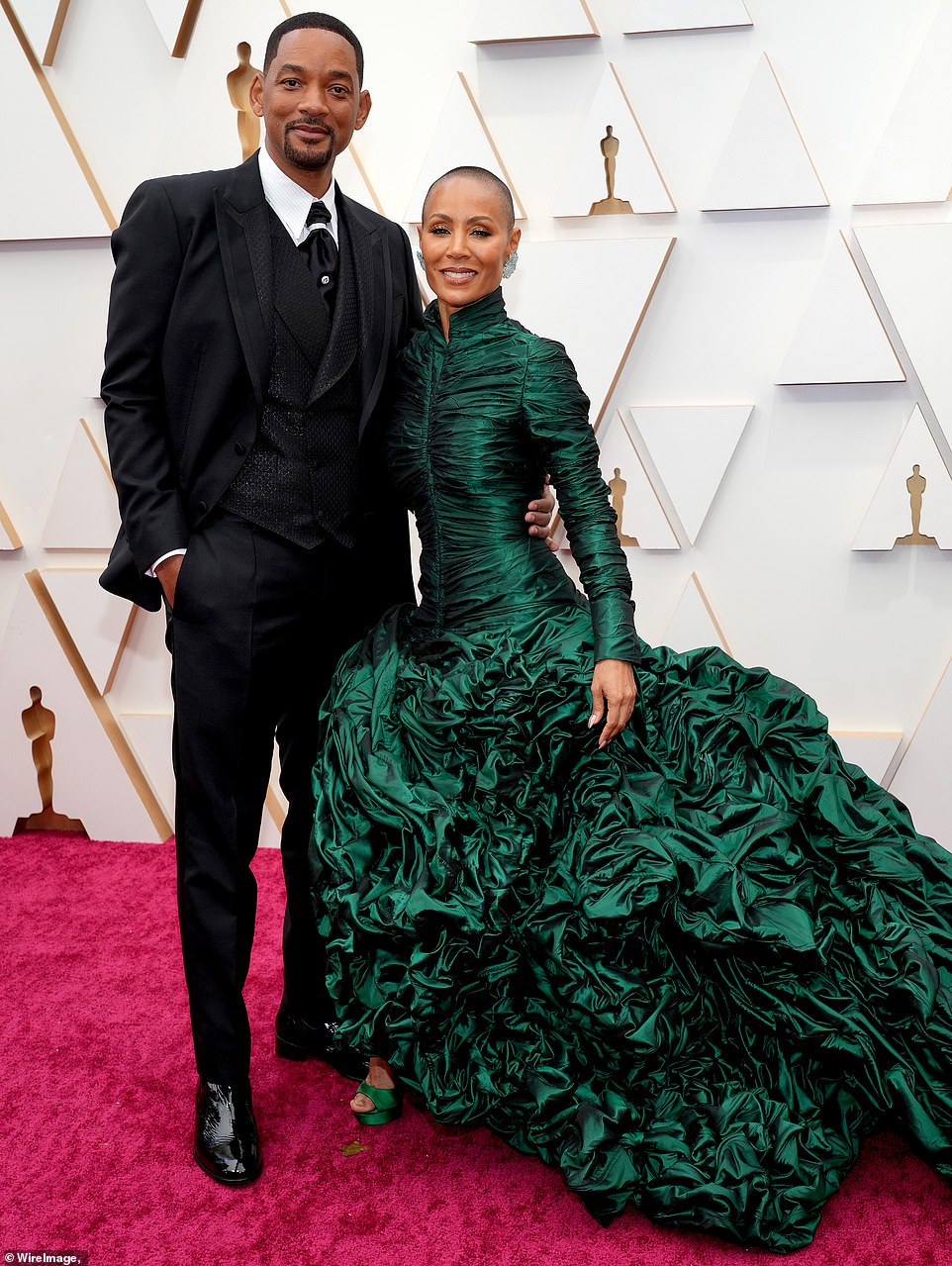 As the comedian, David Spade tweeted: ‘If this was a male host.’

Later in the show, Hall was given more hysteric applause for dressing up as Tammy Faye and saying: ‘I always wanted to play a crazy white lady.’

In the era of blackface, such a gag was again the height of hypocrisy, but shrugged off by the Hollywood elite.

Oh, and speaking of hypocrisy, it was yet another celebrity event where the A-listers were able to roam unmasked while the mere mortals sitting in the Dolby Arena were ordered to stay muzzled.

All in all, this really was the most unsavoury Oscars of all time, a cultural institution being metaphorically burnt to the ground, with woke hypocrisy, gutter behaviour, and film nominees that no one gives a damn about (but at least the charming Coda triumphed over the dire The Power of the Dog to Best Picture in a surprise win).

A freshly slapped Chris Rock was wrong when he declared: ‘That was the greatest night in the history of television.’

Will Smith’s impromptu meltdown may have rescued the Oscars from complete cultural irrelevance, but they are now in a woke spiral of terminal decline. 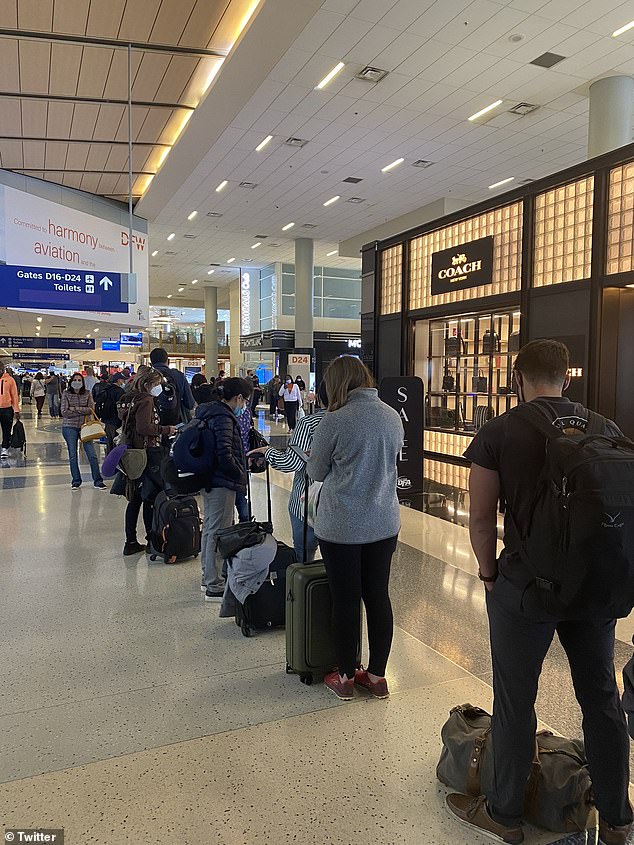 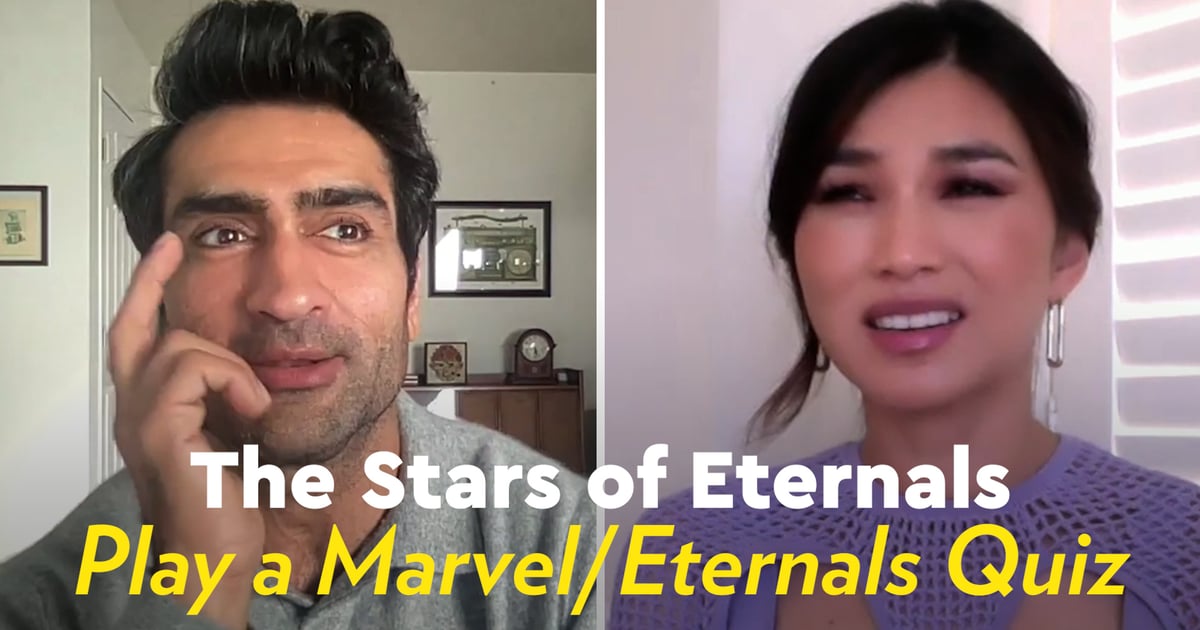 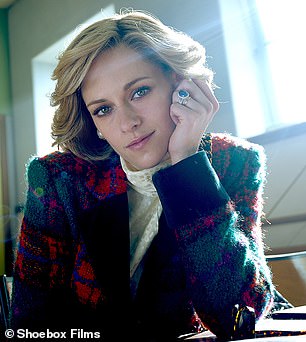 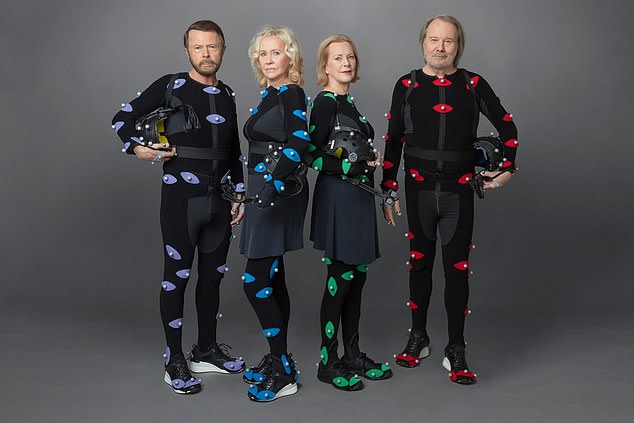