Stacie Dawn Fang, 54, was with her son Jonah Handler, a teenager, when the building collapsed. They lived on the tenth floor. The boy’s small hand waved through the wreckage as a man out walking his dog hurried to the site, climbed through a pile of glass and rebar and promised to get help right away.

Rescuers helped the boy out from under a pile of cement and carried him away on a stretcher to a hospital.

‘There are no words to describe the tragic loss of our beloved Stacie,’ members of her family said in a statement. ‘Many heartfelt words of encouragement and love have served as a much needed source of strength during this devastating time.’

Asked about the boy’s condition, a family friend, Lisa Mozloom told the AP ‘He will be fine. He’s a miracle.’ 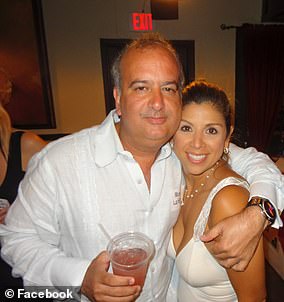 Manuel LaFont, 54, was a proud father, a baseball fan and a business consultant who lived on the building’s eighth floor.

He had a 10-year-old son and 13-year-old daughter with his ex-wife Adriana LaFont, the Miami Herald reported.

Adriana asked her friends on Facebook to pray the rosary for Manny before his body was found. ‘So many memories inside the walls that are no more today, forever engraved experiences in the heart,’ she wrote.

LaFont, a Houston native, coached his son’s baseball team, the Astros, at North Shore Park, just a mile away from the Champlain. He was a parishioner at St. Patrick Catholic Church in Miami Beach. The parish’s school parents gathered Saturday afternoon to pray for LaFont and his neighbors who were still missing.

An alumnus of Sharpstown High School in Houston, LaFont had worked across Latin America and the Caribbean for a manufacturing firm, leading a division focusing on roadway safety that built crash cushions and moveable barriers, the Herald reported.

‘I got into this industry specifically because I don’t want to sell widgets. I want to help people. I want to do something good in this world,’ he said at an industry conference in 2016. ‘When I die, I want to say that my life meant something.’ 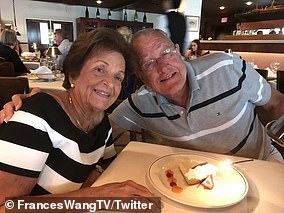 Antonio and Gladys Lozano lived on the ninth floor. The two had known each other over 60 years and would have celebrated their 59th wedding anniversary on July 21.

Authorities confirmed on Saturday that Antonio, 83, and Gladys, 79, were among the dead.

Sergio Lozano said he had dinner with his parents hours before the collapse. He lived in one of the towers of the complex and could see his parents’ apartment across the way from his. That night, he said the heard a loud noise they thought could be a storm.

‘The building is not there,’ he said he told his wife. ‘My parents’ apartment is not there. It’s gone.’

ANA ORTIZ, HER HUSBAND FRANK AND HER SON LUIZ 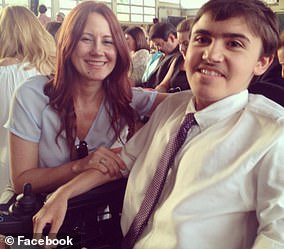 Ana Ortiz, left, and her son Luis Bermudez and Leon Oliwkowicz and his wife Christina (right)

Luis Bermudez, of San Juan, Puerto Rico, had battled with muscular dystrophy for years and used a wheelchair. The 26-year-old man lived with his mother Ana Ortiz on the seventh floor of the Champlain Towers South.

His father, also named Luis Bermudez, texted the AP saying ‘my son is a hero.’ He also wrote on Facebook that he could not believe he’s gone.

‘Now rest in peace and without any obstacles in heaven,’ he wrote. ‘I will see you soon my Luiyo.’

Ortiz, 46, had just gotten married with Frankie Kleiman. Alex Garcia, the couple’s close friend, told The Miami Herald he had set them up on a blind date. Kleiman lived with his wife and stepson on the same floor as his brother Jay Kleiman, who was in town for a funeral, and their mother Nancy Kress Levin. The Kleimans and their mother are still missing. 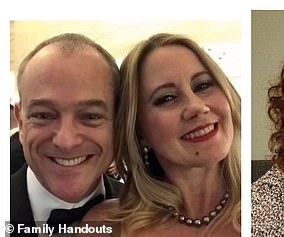 50-year-old Frank Kleiman, left, was found on Monday. He was Ana’s husband

Ortiz was described as a woman who was committed to giving her son the best possible life.

‘She´s a rock star. And gorgeous,” Garcia told the Herald. “And on top of that a super mom.

Kleiman, 50, was the husband of Ana Ortiz, whose body was found alongside that of her disabled son, Luiz, over the weekend. 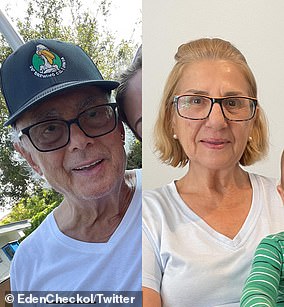 The couple lived on the 8th floor of the condo tower for several years, according to Venezuelan journalist Shirley Varnagy, a close friend of their family.

Varnagy said the Oliwkowicz’s daughter had been outside the building waiting for some information about their fate. Her husband answered their phone and asked to be left alone.

The couple’s daughter, Mrs. Leah Fouhal, works as a secretary at a Jewish school in the Rogers Park neighborhood of Chicago, where the couple donated a Torah in 2019 in a procession that included a vintage fire truck, music and a giant velvet and gold crown, according to COLlive.com, an Orthodox Jewish news outlet that covers Chabad-Lubavitch communities around the world.

Meanwhile, the parents of Rodán, Levine and Sadovnik live in Venezuela and traveled to the U.S. Friday. ‘Some did not have a visa, others had an expired passport, but with diplomatic collaboration they were able to arrive,’ Varnagy said. 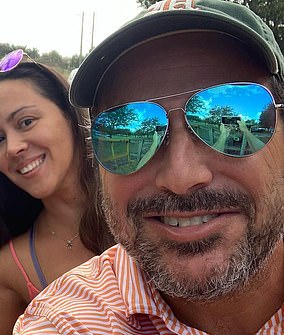 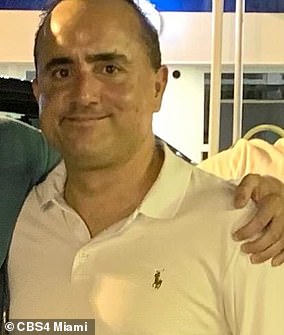 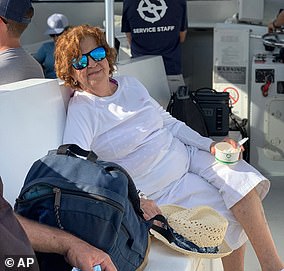 Hilda Noriega, who lived in Apt. 602 in the 12-story tower, was the mother of North Bay Village Police Chief Carlos Noriega.

She had only recently celebrated her 92nd birthday.

Her body was discovered among the remains of the condo tower Tuesday.

Her family paid tribute to the ‘matriarch of the family’ in a statement Wednesday.

Noriega’s son had traveled to the collapse site Thursday to look for his mother, who had only recently celebrated her 92nd birthday.

Among the rubble, the police chief found a birthday card a relative had given to Noriega at a brunch, reported Local10.

Love Island 2021: Contestants 'forced to reveal if they had STIs' on medical form 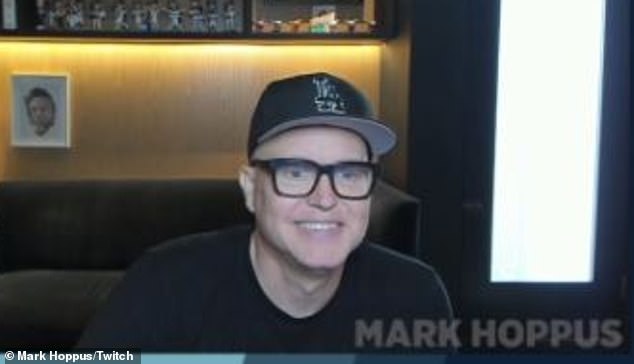 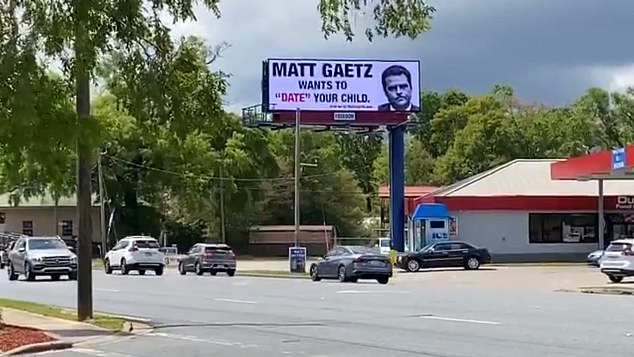 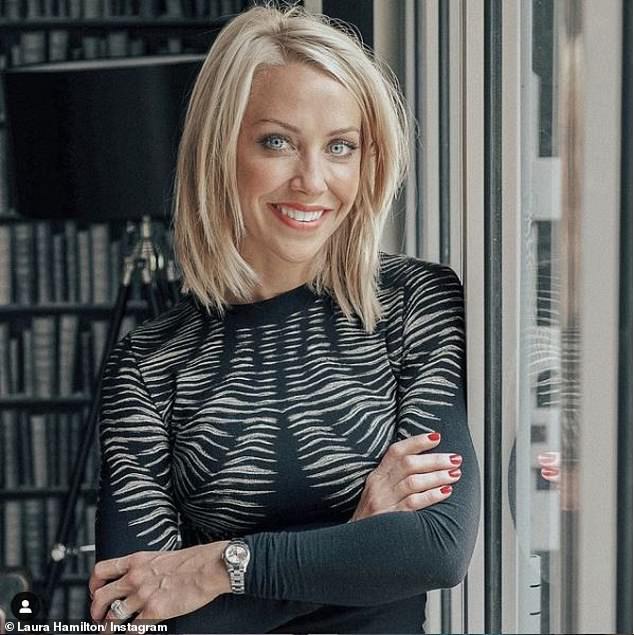 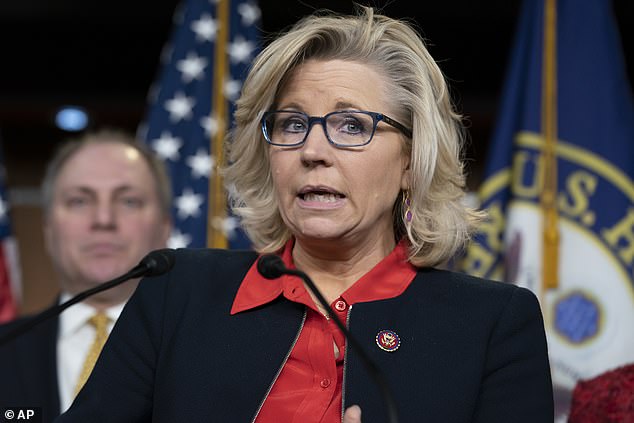