Screaming vegan activists have ambushed diners at a seafood restaurant and publicly chastised them as ‘animal abusers’ in a wild protest against the fishing industry.

At the helm of the crusade was notorious vegan activist Tash Peterson, who has appeared in court over similar stunts, and posted a video of the tirade on Instagram.

Donning activewear and a black face mask as staff desperately try to usher her out, the 26-year-old stormed the venue parroting a pre-written speech about the ‘fish holocaust’, as furious diners yelled ‘boo’ and told her to ‘shut up’.

Standing on a table in front of shocked diners, she launched into the tirade – calling everyone there ‘animal abusers’.

Pictured: Tash Peterson, who was at the helm of the protest on Sunday evening in Fremantle

Tash Peterson (pictured), who is a serial vegan protester, ambushed patrons at a seafood restaurant and later compared herself to women’s rights activists

‘Right now, in this moment, there are billions of fish, dolphins, whales and other marine animals being ripped from the ocean, in massive trawler nets and they are suffocating to death,’ she yelled.

‘This is the largest holocaust in history.’

Panicked staff told the group to leave, but Peterson continued to yell ‘animal abusers’ repeatedly at patrons before finishing her tirade outside in a bizarre attempt to force diners to reevaluate their choices and become vegan.

One man took issue to the protect and tried to intercept the glamorous blond as she strained her voice telling diners that ‘2.7 trillion fish are brutally murdered each year for human consumption’. 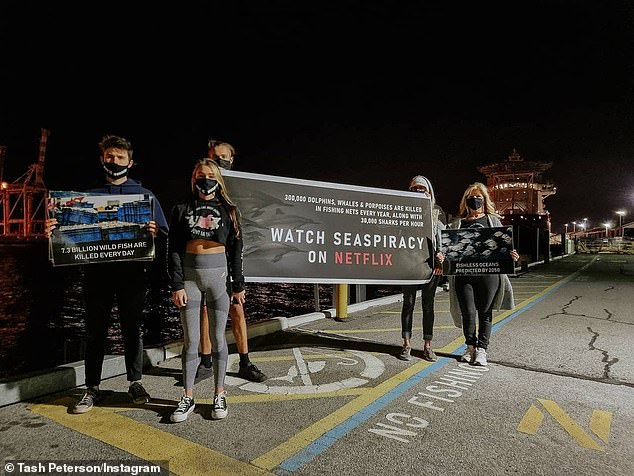 Outside the restaurant, a group held a banner (pictured) that encouraged patrons to watch the Netflix documentary Seaspiracy 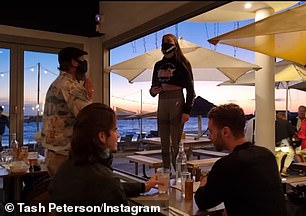 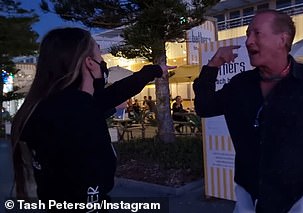 ‘These people are having dinner. Shut up,’ a man (pictured right) said, approaching Peterson after she stood on a table and yelled at diners (left)

‘These people are having dinner. Shut up,’ he said, approaching Peterson.

She flinched and replied: ‘Don’t touch me – you’re on the camera and I’m reporting you to the police.’

‘If you’re not a vegan you’re an animal abuser,’ she said.

Behind her, activists held a banner that encouraged people to watch the Netflix documentary Seaspiracy, which is about the global environmental impact of the fishing industry. 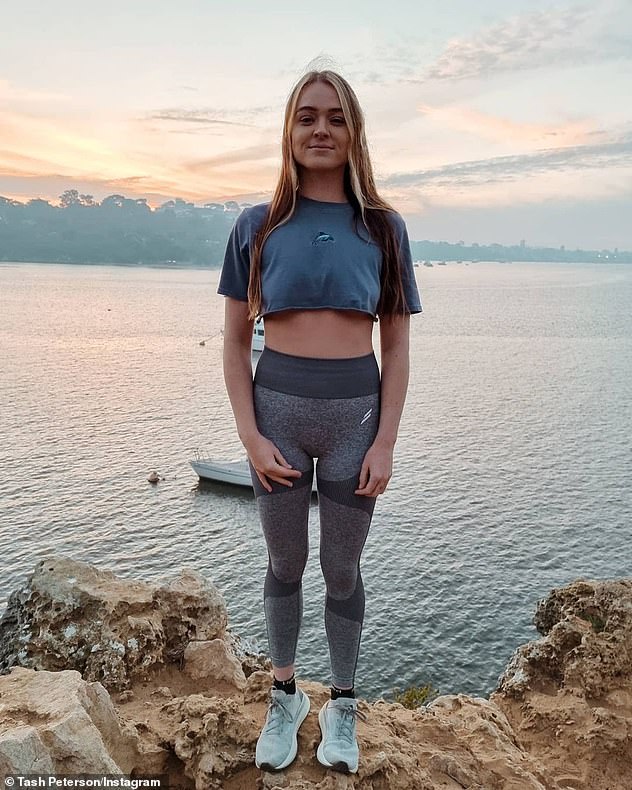 Social media users were divided by the stunt, with some of her diehard fans applauding her efforts but most others slamming her for ruining people’s evenings.

‘Amazing work! Where do you buy these posters from please I want to start doing protests,’ one woman wrote.

‘Thankyou for being there and trying to open people’s eyes to the truth,’ another wrote.

But someone else said, sarcastically: ‘You really made a difference Tash when you disturbed those people having their dinner for two minutes.’ 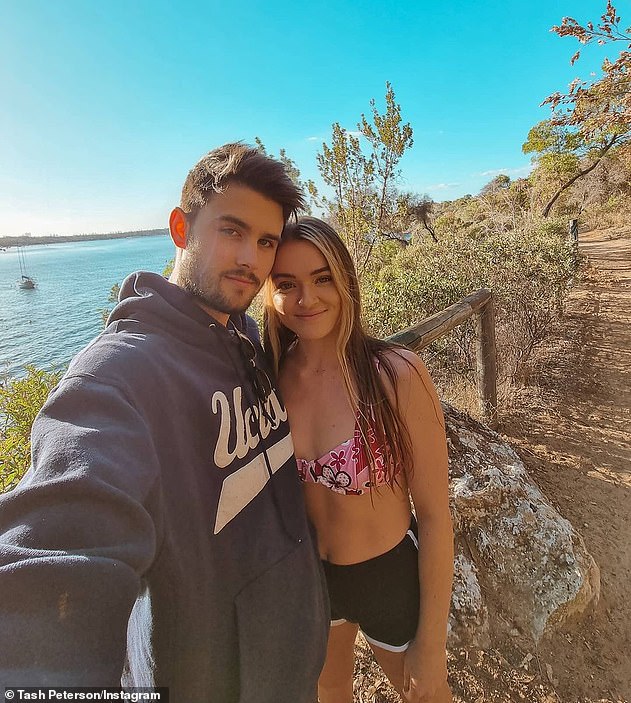 Tash Peterson with her boyfriend Jack Higgs. They were both at the protest on Sunday in Fremantle, Perth 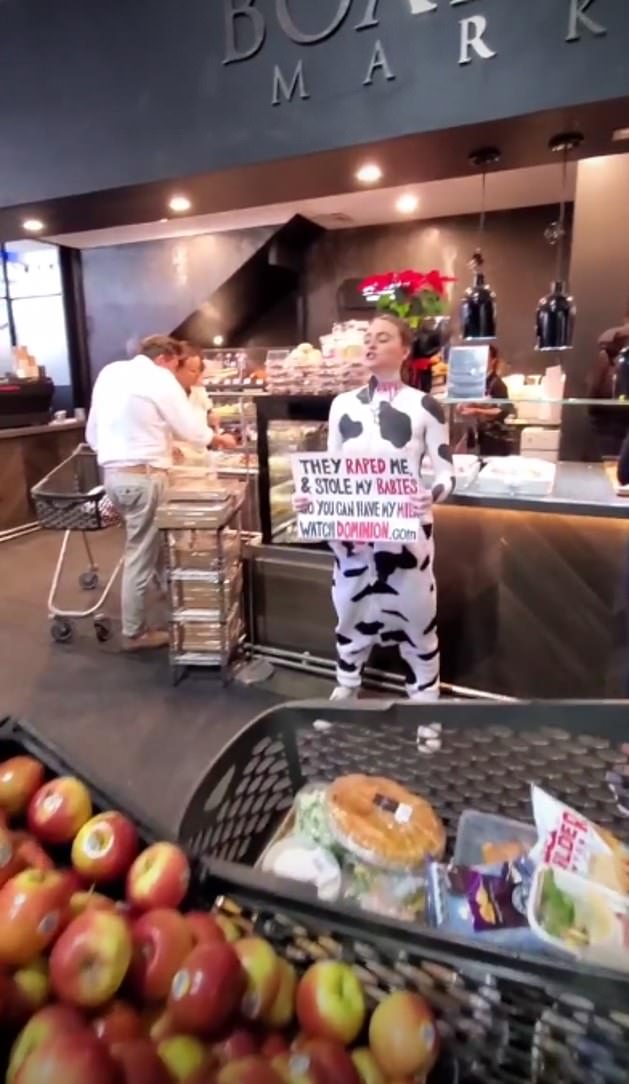 Tash Peterson, 26, became known for the public antics when she dressed as a cow outside a butcher at the Boatshed Markets at Cottesloe, in Perth

In a follow-up post, Peterson sensationally likened her ‘social change’ protest to a series of landmark decisions in Australia, including a ruling after 1902 that gave women the right to vote.

She also said identifying as an LGBT person was only decriminalized after 1975 as a result of protests like hers.

‘They were highly criticised and disliked by the majority. But within a short period of time – the majority supported their rights and unjust laws were changed,’ she wrote.

Her rant at the restaurant is the latest stunt Peterson has pulled over the course of her activism. 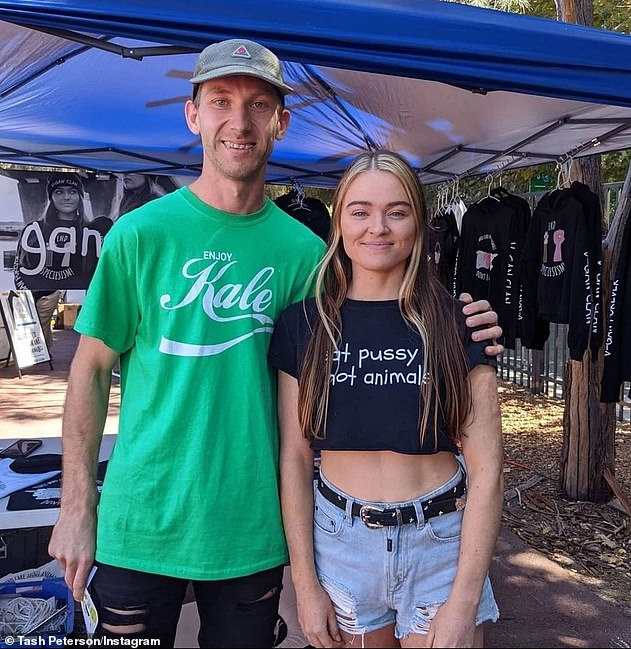 She has dressed in bloodied aprons and stormed into restaurants and supermarkets like McDonald’s and Coles.

She even interrupted an AFLW match by running onto the field at Perth Stadium.

The serial protester ran around for about a minute before she was tackled by Fremantle midfielder Kiara Bowers long enough for security to catch up.

Ms Peterson fronted court where she was fined $1,800 for trespassing. 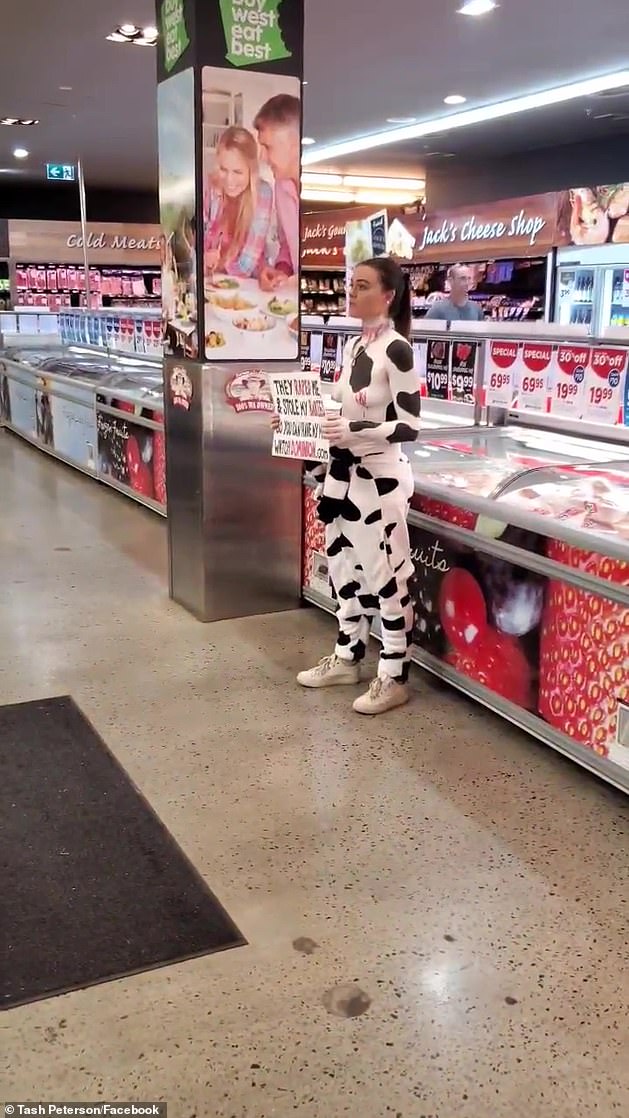 In December, she stormed a fish market and Woolworths store in Perth before launching into a heated rant to stop customers from buying meat.

She wore a onesie up to her waist and painted her body in black and white spots to represent a cow and waved a sign that personified a cow that had been abused and tortured.

‘They raped me and stole my babies so you can have my meat,’ it read.

Stunned shoppers stopped in their tracks as Ms Peterson urged them to ditch meat and completely overhaul their diets for the sake of animals. 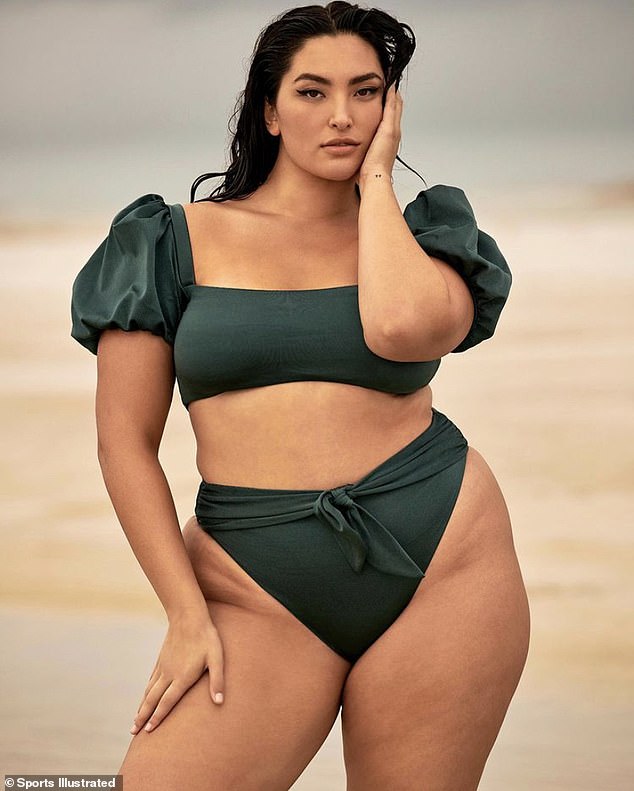 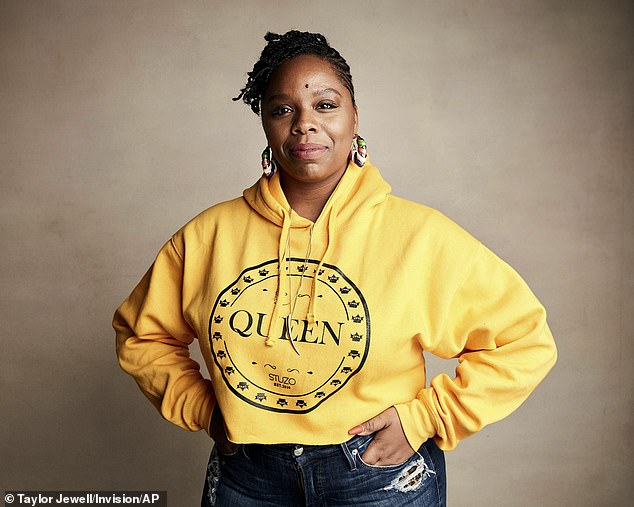 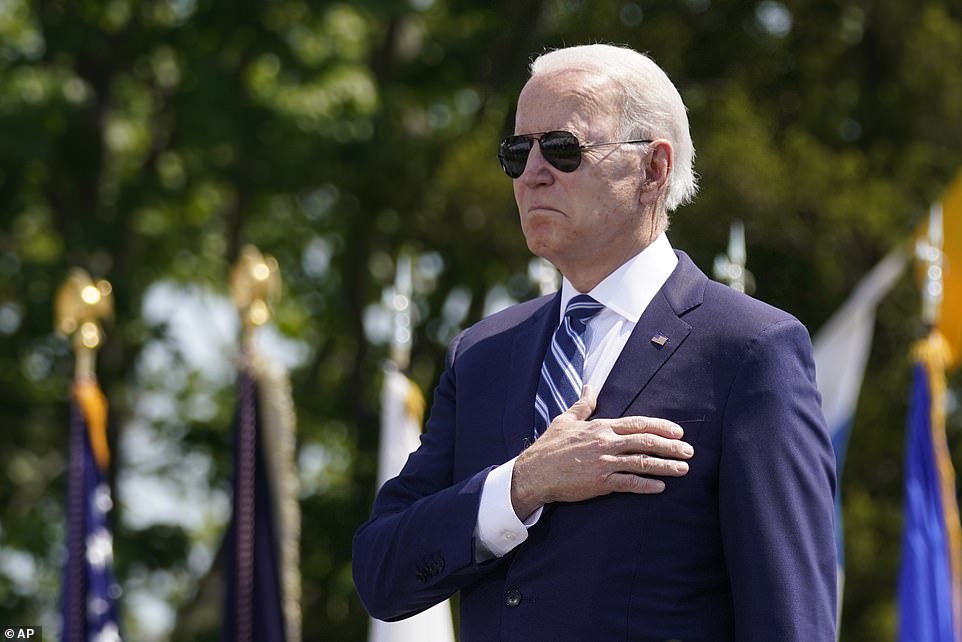 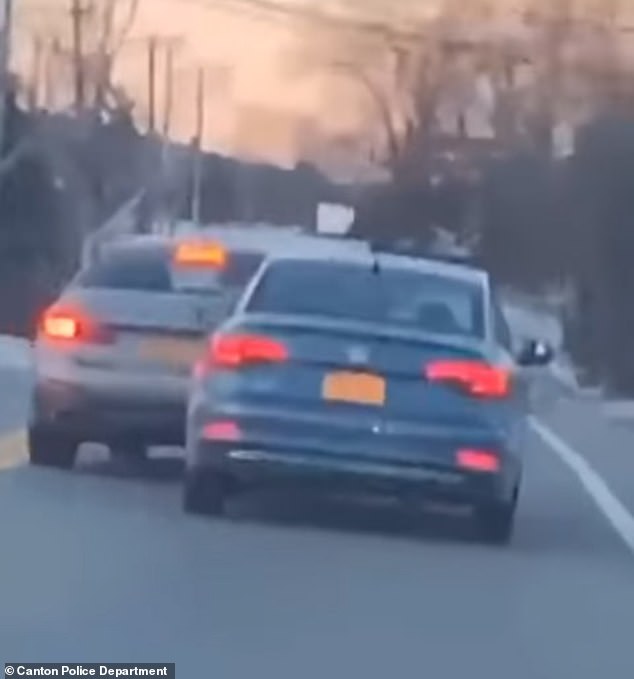