A set of previously unseen photos of murdered actress Sharon Tate taken before she was famous have been discovered.

The candid photos were taken by her roommate’s husband Donald Hagen on his front lawn in Manhattan Beach, California in May 1964.

The actress, then 21, can be seen posing for the camera in a variety of positions as she enjoys the sunshine in a bikini.

Tragically, she would be dead just five years later after being fatally stabbed in her home by members of the Manson Family, a killer cult led by Charles Manson.

On the fateful day in August 1969, Charles ‘Tex’ Watson, Susan Atkins and Patricia Krenwinkel killed Sharon Tate and her friends at her husband Roman Polanski’s home.

Archived photos of Sharon Tate (pictured) taken by her roommate’s husband on his front lawn in Manhattan Beach, California in May 1964, have been revealed 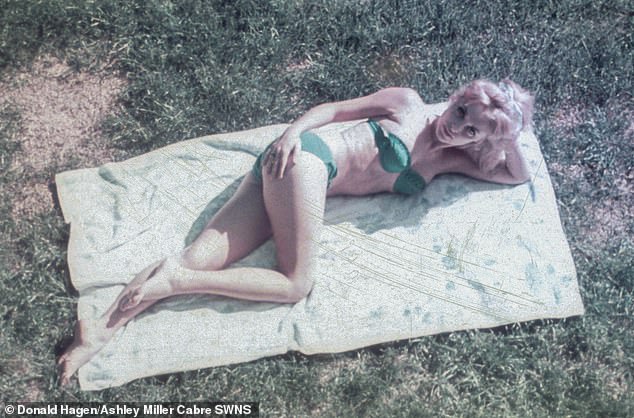 Sharon, who was tragically murdered in 1969, is seen enjoying the sunshine dressed in a bikini, in the snaps found by Ashley Miller Cabrejas

The photos were discovered in 2017 by Ashley Miller Cabrejas, the stepdaughter of Hagen, who was married to Tate’s roommate.

The substitute teacher, 46, who lives in West Los Angeles, was looking for camera equipment to photograph a solar eclipse when she stumbled across the snaps.

Ashley said: ‘They had been sitting in our garage for years until I came across them cleaning his stuff.

‘It was totally a casual thing, from before she was even famous. 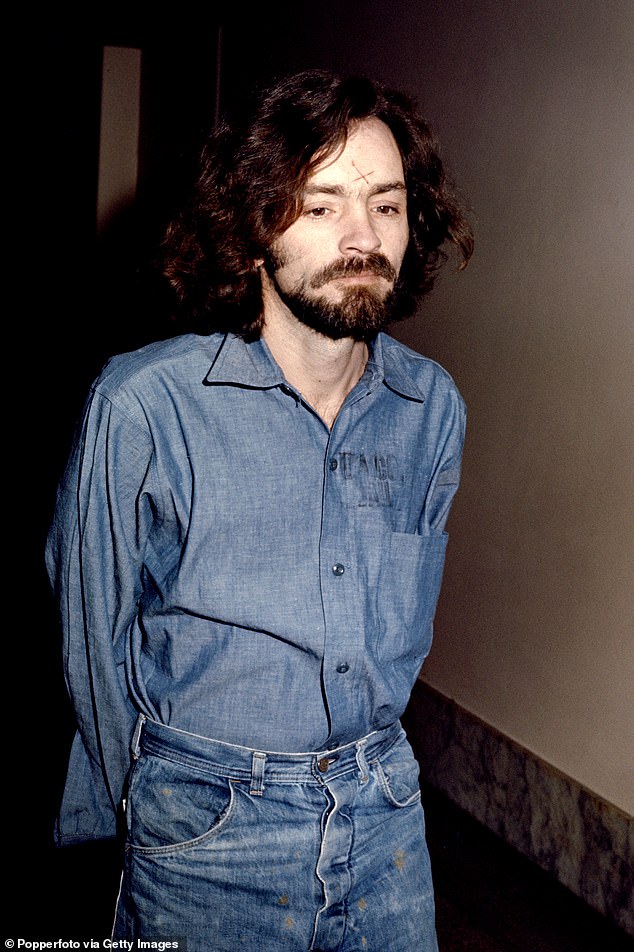 Charles Manson (pictured), who led the Manson Family cult, died in prison in November 2017 at the age of 83

‘Many a Christmas or Thanksgiving dinner I would hear about how he was friends with Sharon Tate – of which I gave it absolutely no attention because I was more consumed with whatever stupid teen thing was important at that time.

‘I really wish I would have asked more questions but it was difficult since that life he had was a life before my mum.

‘I know he went to check out the property she was killed at before she moved in, and I know that it really, really haunted him his whole life.’

Sharon was friends with Donald’s first wife Laurie K, whom he married in Washington in 1964. 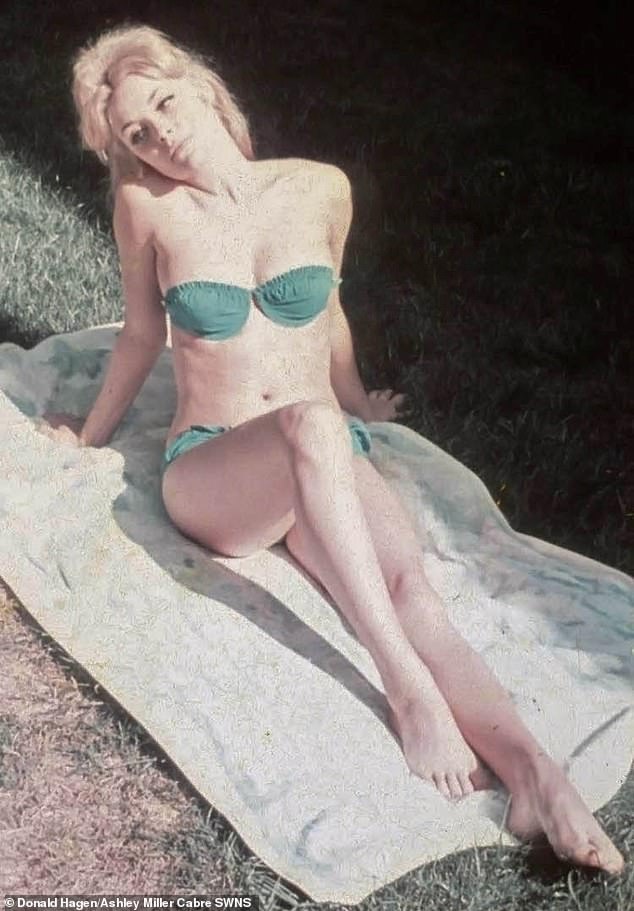 Ashley, the stepdaughter of Donald Hagen, said she found the photos of Sharon Tate, then 21, while searching in her garage 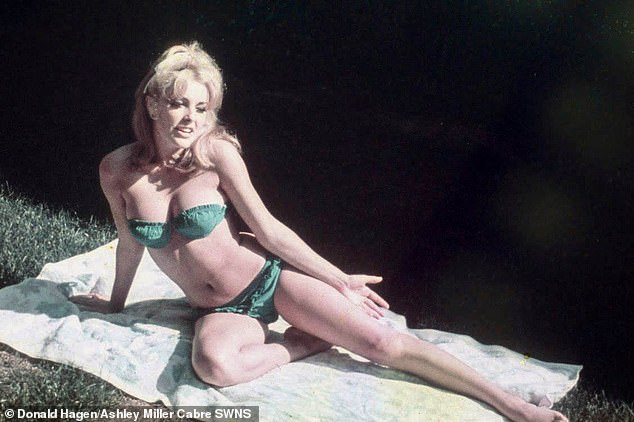 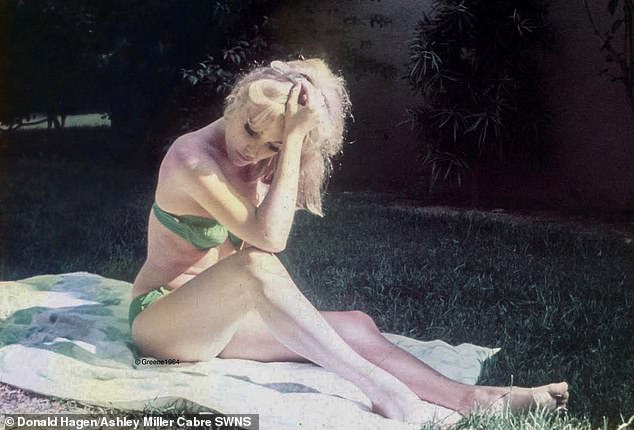 In the snaps, Laurie can be seen posing in her bikini while reclining on the front lawn of Donald’s home

Laurie was friends with Tate as they were both aspiring actresses and models and were all from Tacoma, in Washington.

Ashley said: ‘Don and Sharon were, I guess, what you would assume normal for the roommate of your girlfriend and future wife.

‘Not BFFs, but saw each other frequently and occasionally hung in same circles as well as when he was visiting Laurie at Laurie and Sharon’s apartment.

‘If I am not mistaken, Sharon was very busy, her career was starting to take off, so I assume she was on auditions etc., regularly. 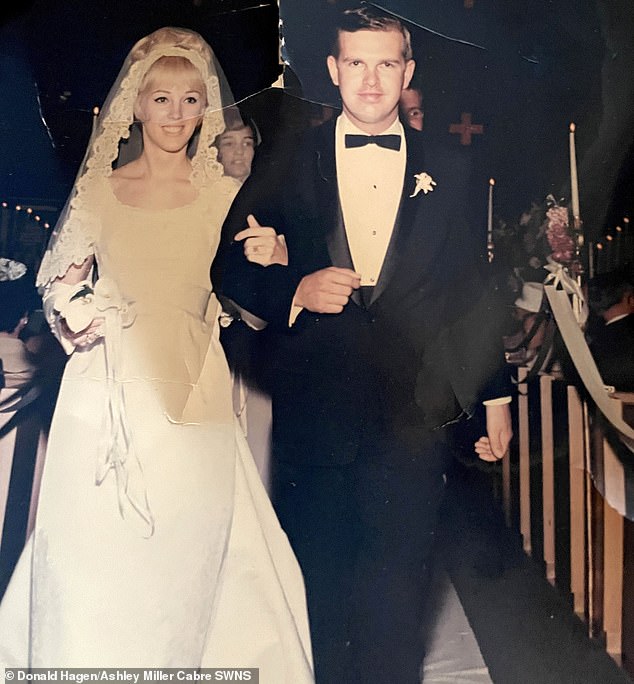 Sharon became friends with Donald’s first wife Laurie K as they were both aspiring actresses and models from Tacoma, in Washington Pictured: Laurie K and Donald Hagen on their wedding day

Donald passed away with dementia in 2017 after being with Ashley’s mother for 25 years, and with no biological children, left his entire estate to beloved stepdaughter.

She said: ‘He was a playboy and honestly I didn’t really know who he was until he passed.’

‘All I knew while he was alive is that he loved us and he had a past.’

In August 2017, there was a solar eclipse over Los Angeles and Ashley wanted to capture it on camera so dug around in her stepfather’s garage for his old camera gear. 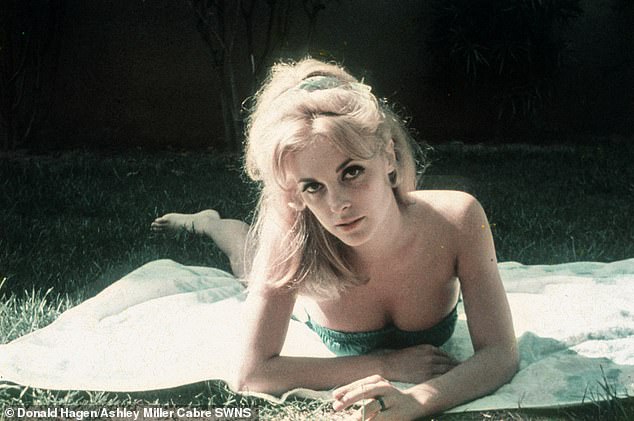 Ashley discovered that her stepfather had been a ‘ladies’ man’, when she found the photos of him with lots of women including Sharon Tate

She found pictures of real estate agent Donald with lots of women, including Sharon Tate.

Ashley said: ‘I went through all his pics, I found out that so was quite the ladies’ man to say the least.

‘That’s why his license plates say DON1, aka ‘Don Juan’. Then I started digging and, man oh man, was he a bad boy, but it was the 60s.

‘Then it all came in to focus, the stories I never listened to when I was I teen but he tried to tell me.

‘It’s just really cool part of LA history where I live, and pretty amazing that these were sitting in my garage and my family even at distance is part of iconic LA.’

Sharon Tate was eight-and-a-half month pregnant, when she was brutally murdered in her home in 1969 by the Manson Family. 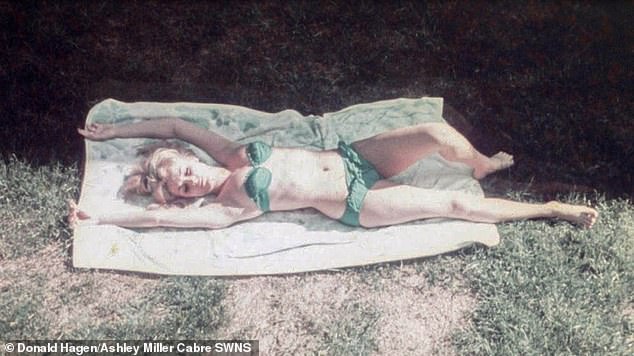 Sharon was at the peak of her career, when members of the Manson family were sent to her house by Charles Manson with orders to kill

The actress from Dallas, who was the eldest of three daughters, found fame although her parents had no entertainment industry ambitions for her.

He breakthrough role came in 1967 with cult classic Valley Of The Dolls, in which she played the character of Jennifer North and she went on to earn a Golden Globe nomination.

Sharon was then in The Fearless Vampire Killers and she married her co-star and the director of the film Roman Polanski in August 1968.

A year later on the night of her murder, she had three friends round her house for a dinner party: hairstylist Jay Sebring, Polanski’s friend Wojciech Frykowski and his partner, the coffee heiress Abigail Folger. Quincy Jones was meant to also attend, but the invite slipped his mind. 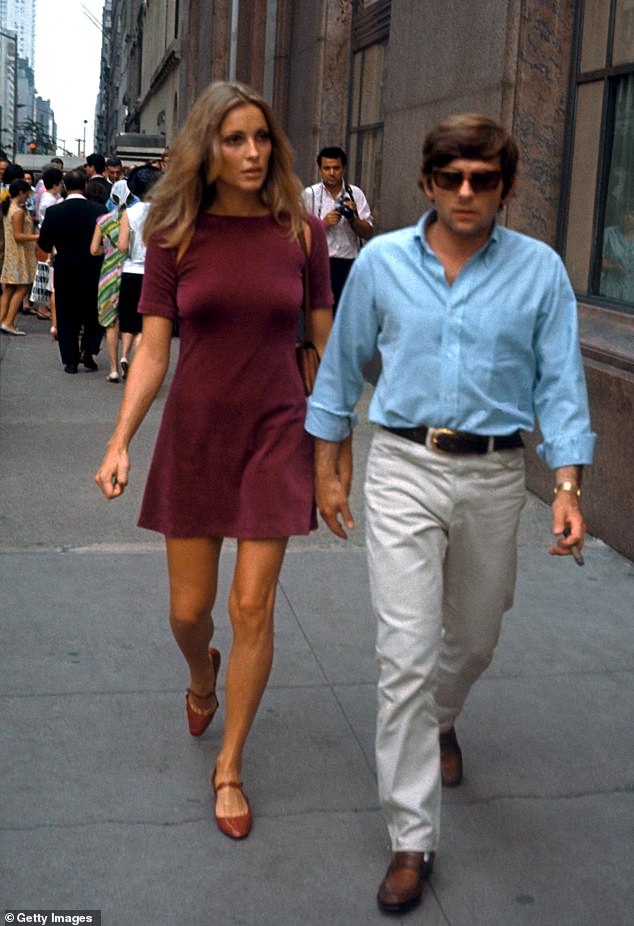 Sharon had been at the home she shared with husband Roman Polanski (pictured), when cult members arrived at the house previously accommodated by Terry Melcher

Manson Family cult members Tex Watson, Susan Atkins, Linda Kasabian and Patricia Krenwinkel were sent to the house by Charles Manson and told to ‘totally destroy everyone in it, as gruesome as you can’.

The motivation behind the murder was that Manson was rejected by a music producer who had lived in the house, but Terry Melcher had left the property long ago.

When the cult arrived at the house, caretaker Steven Parent was seen and subsequently shot to death.

Sharon Tate’s killers were sentenced to death, which was then changed to life in prison when California abolished the death penalty.

While Susan Atkins died in prison in 2009 of brain cancer, Patricia Krenwinkel and Leslie van Houten are both due for parole, but have been denied repeatedly in the past.

Charles Manson died in prison in November 2017 at the age of 83. 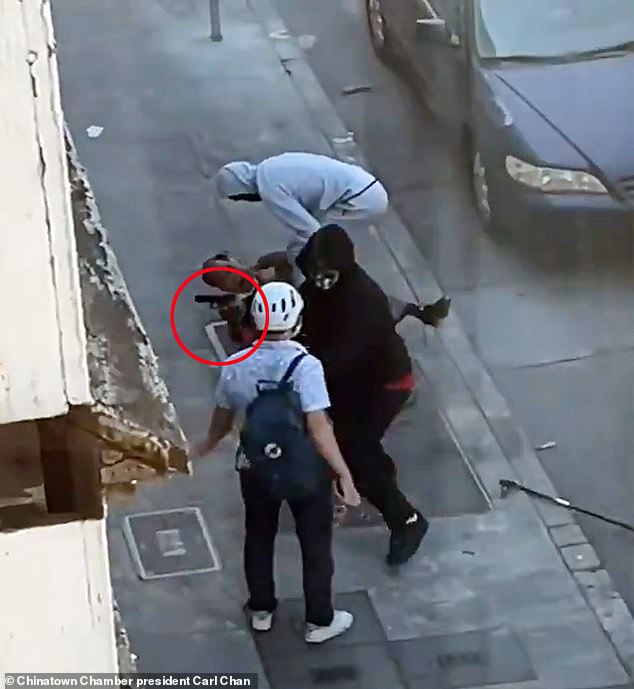 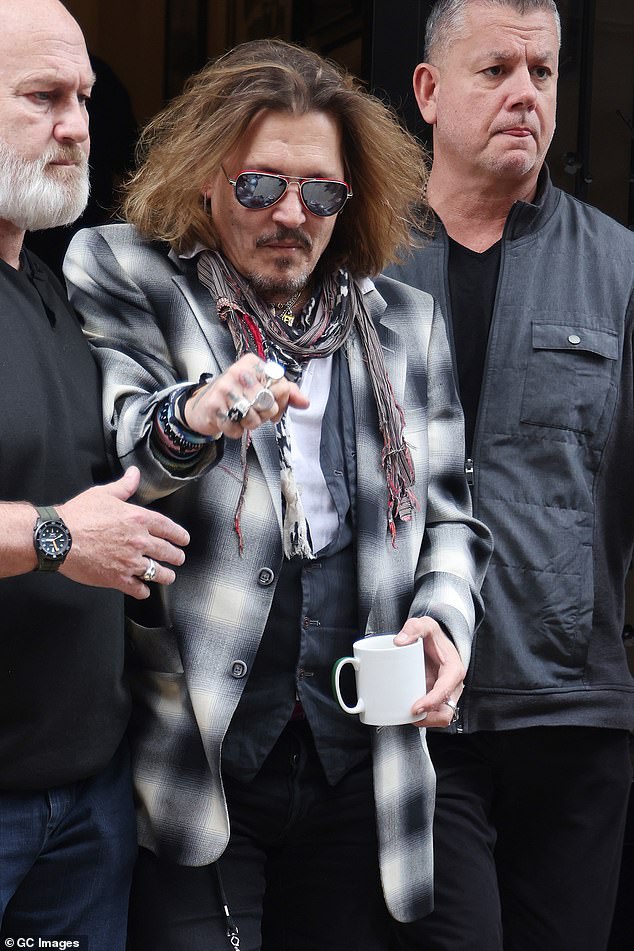