Trump Jr. slammed it as ‘craziness’ that Dr. Seuss Enterprises – the publisher of the bestselling children’s books – announced Tuesday that it is taking the six titles out of print.

He posted a picture to social media of him and his son Spencer doing some bedtime reading with another Seuss classic ‘Cat in the Hat’ as he claimed, ‘given the craziness of today it was definitely our first choice’.

Cruz also took to social media to voice his opposition to the decision as he wished the author a happy birthday and claimed that President Joe Biden was making attempts ‘to cancel Dr. Seuss’ that were ‘utterly asinine’.

It came after the president on Monday removed all mention of the writer in the customary annual presidential proclamation touting Read Across America Day – which takes place on Seuss’s birthday on March 2.

Amid the backlash, Universal Studios also revealed Tuesday it is ‘evaluating’ the future of a play area in Orlando theme park Islands of Adventure that is themed on the Dr. Seuss book ‘If I Ran the Zoo’.

Donald Trump Jr. posted a picture to social media of him and his son Spencer doing some bedtime reading with another Seuss classic ‘Cat in the Hat’ as he blasted the decision

Trump Jr. claimed, ‘given the craziness of today it was definitely our first choice’ 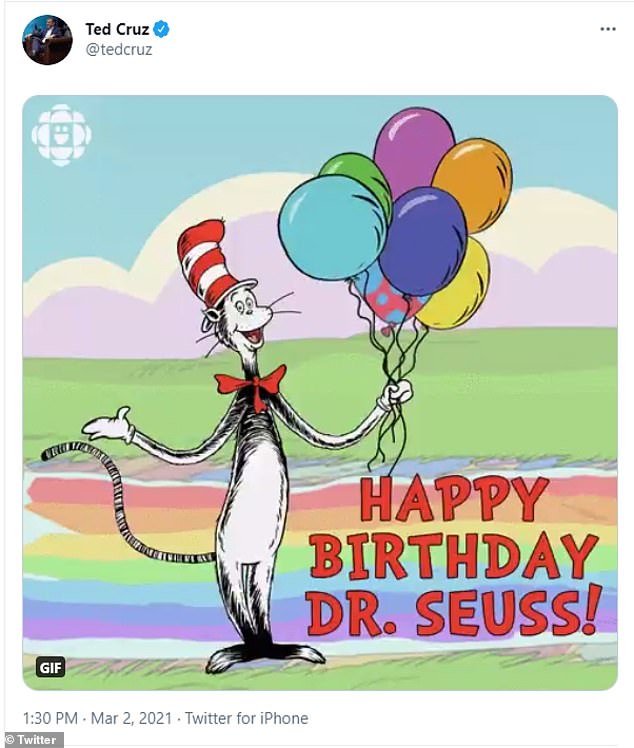 The children’s book was one of six from the bestselling author, born Theodor Seuss Geisel, that Dr. Seuss Enterprises announced on Tuesday be pulled from publication.

The move comes as criticism grows in the United States over the way minority communities have been portrayed in many of the author’s books.

Dr. Seuss Enterprises said it had made the decision after carrying out a review of its collection last year with the help of experts, including teachers.

‘These books portray people in ways that are hurtful and wrong,’ the company said in a statement. 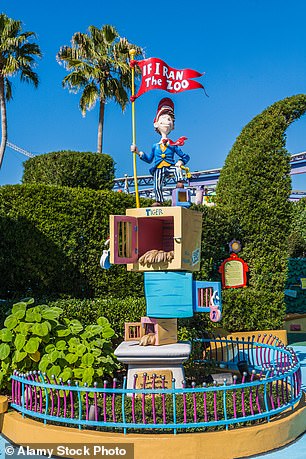 Universal Studios also revealed Tuesday it is ‘evaluating’ the future of a play area themed on the Dr. Seuss book ‘If I Ran the Zoo’ (as pictured above in Orlando)

The other titles being consigned to history are ‘And to Think That I Saw It on Mulberry Street,’ ‘McElligot’s Pool,’ ‘On Beyond Zebra!’ and ‘Scrambled Eggs Super!’

‘Ceasing sales of these books is only part of our commitment and our broader plan to ensure Dr. Seuss Enterprises’ catalog represents and supports all communities and families,’ the statement added.

On Tuesday, Universal Orlando confirmed that had taken the six books from the shelves of its gift shop in the area of the park known as Seuss Landing, which is based on characters and attractions from the books of the author.

Among the attractions in Seuss Landing is the play area themed after ‘If I Ran the Zoo’.

This book was named among those that will cease publication Tuesday because of its portrayal of Asian people.

It also includes a drawing of two bare-footed African men wearing what appear to be grass skirts with their hair tied above their heads.

None of that imagery is portrayed in the play area but Universal stated that it was ‘evaluating’ the name and the theme anyway.

In the book, an Asian person is portrayed wearing a conical hat, holding chopsticks, and eating from a bowl.

‘Seuss Landing continues to be very popular with our guests and we value our relationship with Seuss Enterprises,’ a Universal spokesperson told Spectrum News.

‘We’ve removed the books from our shelves as they have asked, and we’ll be evaluating our in-park experience too. But our guests can plan on continuing to be able to enjoy their favorite experiences at Seuss Landing.’

Dr. Seuss Enterprises made the announcement on what would have been the birthday of the famous children’s book author.

Seuss, born Theodor Seuss Geisel in Massachusetts in 1904, published more than 60 books during his lifetime, including some of the most popular children’s books of all time. 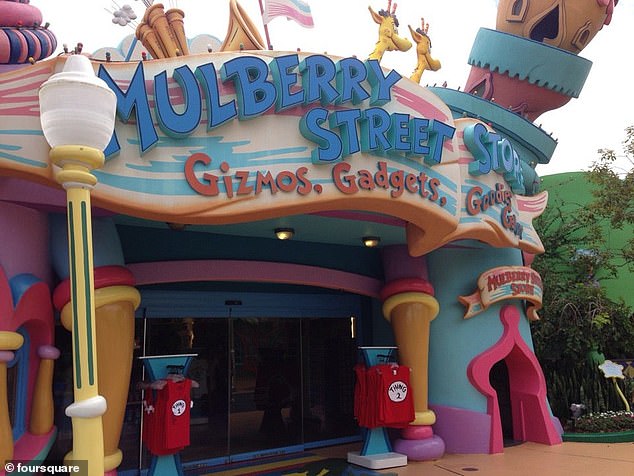 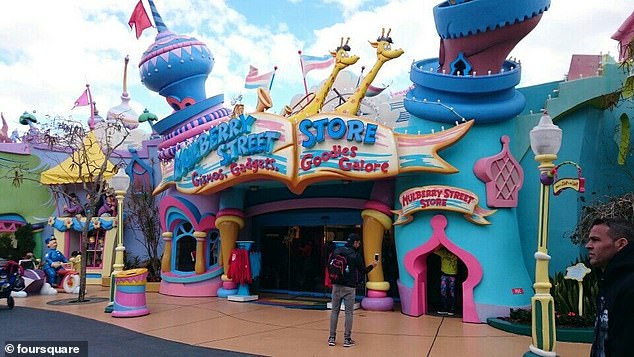 Universal has said it is ‘evaluating’ the future of the area of the park, as pictured 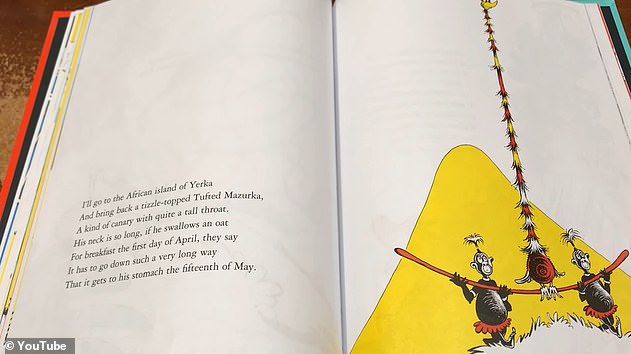 ‘If I Ran the Zoo’, which was published in 1950, includes a drawing of two bare-footed African men wearing what appear to be grass skirts with their hair tied above their heads 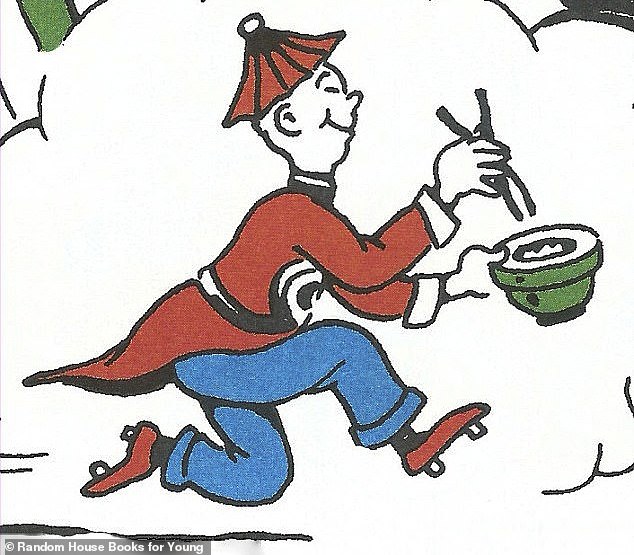 This image appears in the 1937 book ‘And To Think I Saw It On Mulberry Street’, shows an illustration of a ‘Chinaman who eats with sticks’ – a caricatured picture of an Asian man

His most famous works include ‘The Cat in the Hat,’ ‘Green Eggs and Ham’ and ‘How the Grinch Stole Christmas.’ He died in 1991.

Seuss’s books have sold more than 650 million copies and have been translated into dozens of languages.

They are being reevaluated, however, over their portrayal of Black and Asian people.

A 2019 study published in the ‘Research on Diversity in Youth Literature’ journal studied 50 of his books.

The report concluded that 43 of the 45 characters of color had ‘characteristics aligning with the definition of Orientalism.’ 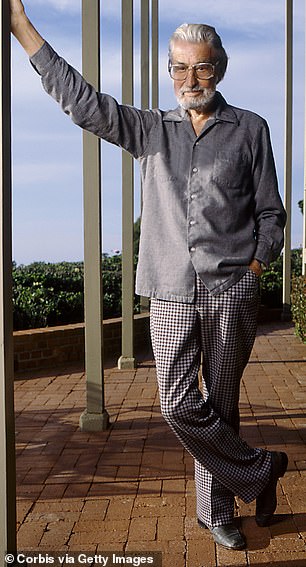 Seuss (pictured above), born Theodor Seuss Geisel in Massachusetts in 1904 , published more than 60 books during his lifetime, including some of the most popular children’s books of all time

The two black characters in the books were identified as ‘African’ and both ‘align with the theme of anti-blackness,’ the study said.

Stereotypical characters portrayed as ‘Arabian’ appear in ‘If I Ran the Zoo,’ ‘On Beyond Zebra!’ and ‘Scrambled Eggs Super!’

‘The Cat’s Quizzer’ also features ‘Arabian’ figures as well as a character portrayed as ‘a Japanese.’

The study also said Seuss published anti-black and anti-Semitic cartoons in a magazine in the 1920s as well as racist anti-Japanese propaganda during World War II.

However, his wartime cartoons for the liberal-leaning daily New York newspaper PM were also praised for railing against racism, anti-Semitism, and American isolationism.

On Tuesday, Seuss’s stepdaughter Lark Grey Dimond-Cates told the New York Post ‘there wasn’t a racist bone’ in the author’s body but described the withdrawal of the six books as ‘a wise decision’.

Dimond-Cates, whose mother Audrey Geisel was Dr. Seuss’ second wife, said she was informed a day earlier about the decision to pull the six books.

‘I think in this day and age it’s a wise decision,’ she said. ‘I think this is a world that right now is in pain, and we’ve all got to be very gentle and thoughtful and kind with each other.

‘We’re taking that into account and being thoughtful. We don’t want to upset anybody.’

She said she is hopeful the books can one day go back into print. 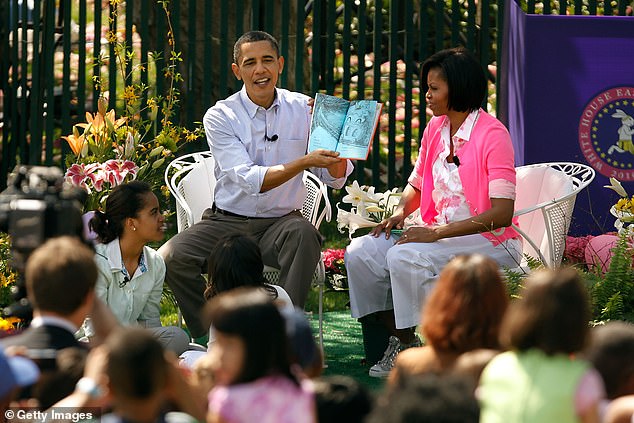 Presidents Clinton, Obama and Trump have all mentioned Dr. Seuss in conjunction with Read Across America Day, which is designed to encourage school children to read more. The Obamas are pictured in April 2010 as the former president read ‘Green Eggs and Ham’

The announcement sparked a bidding frenzy for the scrapped books on eBay. The leading bid for a first edition of ‘On Beyond Zebra!’ soared from $14.99 on Monday to $810 at 2.15 pm Tuesday.

The National Education Association, which founded Read Across America Day in 1998 and deliberately aligned it with Geisel’s birthday, has for several years de-emphasized Seuss and encouraged a more diverse reading list for children.

President Biden broke with tradition and left Dr. Seuss out of the 2021 Read Across America Day proclamation.

The White House has not explained why Dr. Seuss was left out of this year’s proclamation.

Read Across America Day had traditionally featured on Dr. Seuss books including classics like The Cat in The Hat and The Grinch.

Biden's aides were furious that Cuomo made a self-serving video for the 2020 DNC, new book says 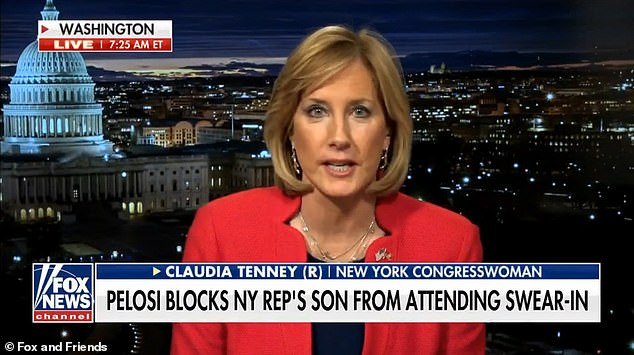 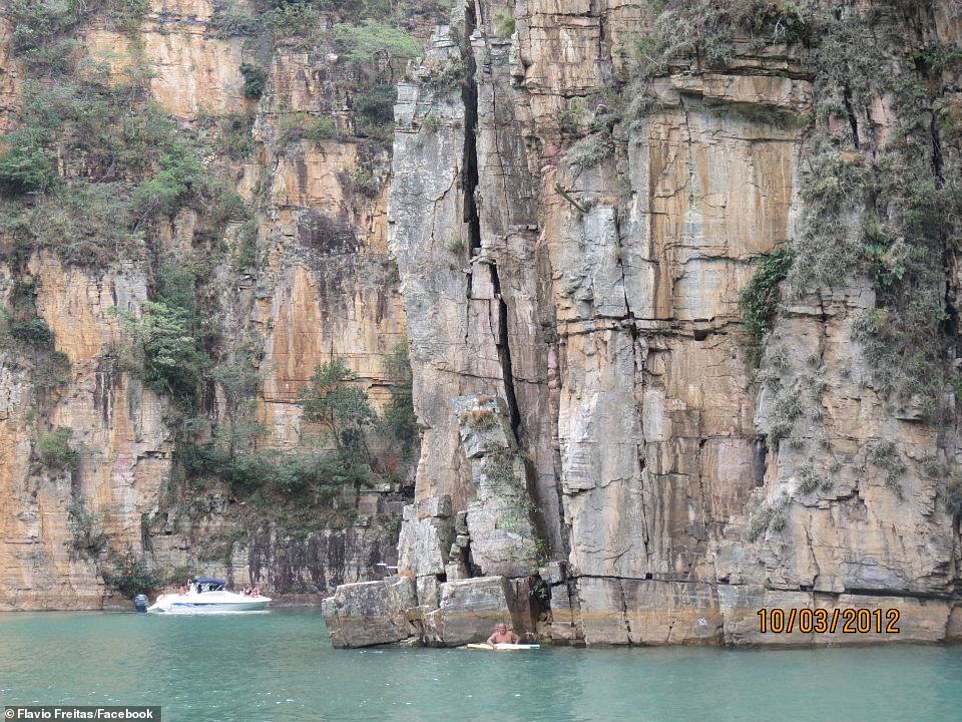