The Trump administration started planning to kill Iranian general Qassem Soleimani almost three years prior to his 2020 assassination and originally wanted to wipe out a ‘whole list of folks’ that day, it has been revealed.

Mike Pompeo is said to have first created a task force of CIA leaders to ‘take Qassem Soleimani off the board’ almost as soon as he was appointed to his role as CIA director in January 2017.

The plot reportedly escalated throughout 2018 and 2019 driven by the US’s withdrawal from the Iran Nuclear Deal and the killing of a US contractor in Iraq before Donald Trump ultimately gave it the go-ahead because he wanted to ‘take credit for it’ in his re-election campaign.

Former Acting Secretary of Defense Chris Miller also revealed Soleimani had not been the only target, with the US government planning to take out several senior Iranian military and intelligence operatives that day.

Other targets included Quds Force’s top commander in Yemen Abdulreza Shahlai and members of the Iran-backed militia Popular Mobilization Forces – but these failed to materialize.

Pompeo’s crucial involvement has now left him at risk of a revenge attack with insiders saying he and other senior US officials are ongoing targets of Iranian assassination attempts.

Trump was reportedly so worried about Pompeo and his top Iran envoy Brian Hook being assassinated after they left office that he set aside £15 million to protect them in his final White House days.

The Trump administration started planning to kill Iranian general Qassem Soleimani (pictured in 2016) almost three years prior to his 2020 assassination and originally wanted to wipe out a ‘whole list of folks’ that day, it has been revealed 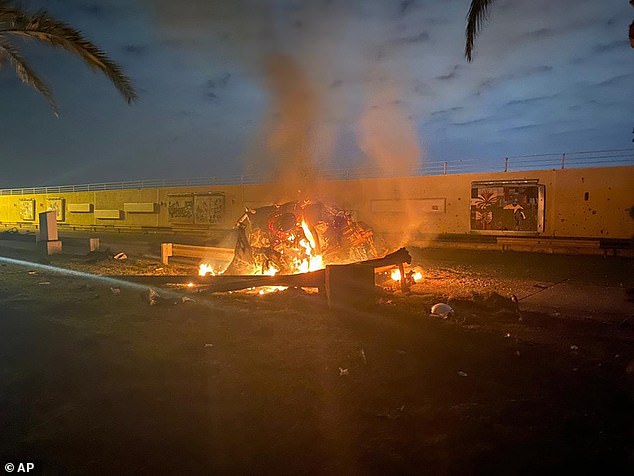 These revelations, from several current and former US officials, cast a new light on the US drone strike in Iraq on January 3 2020 which kicked off a major escalation in tensions between the two nations.

Several current and former US officials revealed new details to Yahoo News about the extensive planning that led up to the assassination.

They told how the event had been many years in the making, dating back to not long after Trump entered the White House.

One former senior CIA official told the outlet Pompeo first held a meeting to discuss plans to kill Soleimani back in 2017.

The meeting included members of the CIA’s Counterterrorism Mission Center and its paramilitary Special Activities Center, among others, and the group came up with various different plans to take the Iranian general out, they said.

Pompeo also put forward the plans at meetings with the National Security Council (NSC) that year.

The insider said the plot divided opinion with some officials raising legal concerns while others welcomed the CIA boss’s ‘blue sky’ approach after what was regarded as a softer approach from the Obama administration.

Pompeo reportedly pushed back at any legal woes telling people ‘don’t worry about if it’s legal; that’s a question for the lawyers,’ the official said.

The plans are said to have become increasingly serious in summer 2018 when Trump announced he was pulling the US out of the nuclear deal.

Around this time, the plan had also reportedly shifted from using the CIA to using the Pentagon’s special operations units. 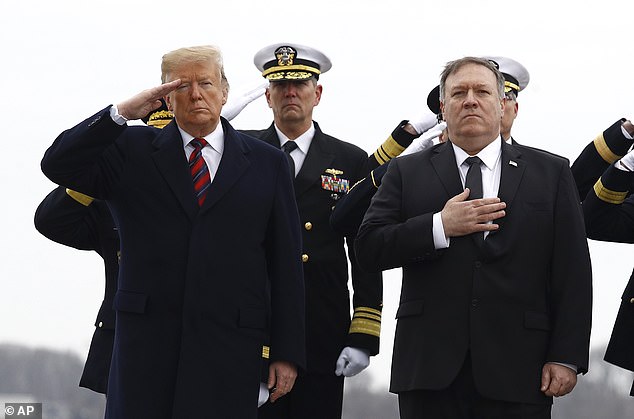 Mike Pompeo is said to have first created a task force of CIA leaders to ‘take Qassem Soleimani off the board’ almost as soon as he was appointed to his role as CIA director in January 2017. Pictured with Trump in 2019

Over the course of the nearly three years between Pompeo’s initial meeting and Soleimani’s death, the US tried to put Soleimani under increased surveillance.

One elaborate operation involved infiltrating the supply chain through which Soleimani got new cellphones and bugging the devices long before they reached the general.

This came about following a tip off from Israel about a courier working for Soleimani and tracing the phones back to the source, said one former CIA official.

Victoria Coates, the deputy national security adviser for the Middle East at the time, told Yahoo the plan really became a reality in November 2019 when ‘bad things’ seemed to be happening involving Soleimani and the US.

‘We were tracking Soleimani pretty closely, and there was a tendency for him to travel somewhere and some very bad things to happen to the US,’ she said.

NSC officials then received ‘the call from the top that they needed to make sure options were in order’ to assassinate Soleimani.

Planning heated up with regular meetings being held with US intelligence and military top brass. 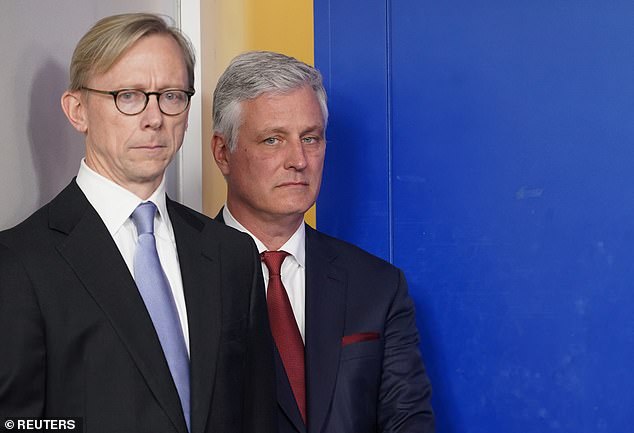 Brian Hook (left) with Robert O’Brien on January 10 2020, days after the strike. Hook and Pompeo are now said to be at the biggest risk of a revenge attack from Iran

Several senior officials said Trump then gave the plan the green light after the US citizen was killed by Iranian militia in Iraq that December 2019.

Miller told Yahoo the ‘threat was different’ from Soleimani at this time.

Robert Greenway, the senior director for the Middle East, said the general was ‘going deeper into their playbook.’

‘[He] was actively developing plans to conduct imminent attacks targeting American diplomats and service members in Iraq and throughout the region,’ he said.

One official, however, said Trump’s motivated was that he had his sights on re-election.

They said the operation could have remained undercover but that Trump wanted ‘to take credit for it’ so decided on an overt strike.

Trump repeatedly boasted about the general’s killing in the run-up to the election. 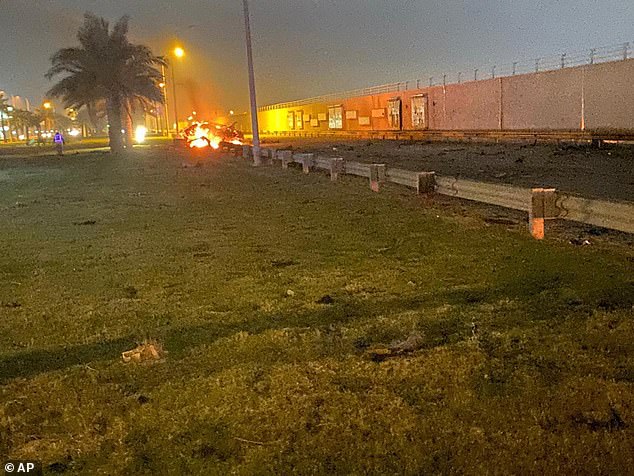 The aftermath of the strike. Trump was reportedly so worried about Pompeo and Hook being assassinated after they left office that he set aside £15 million to protect them in his final White House days 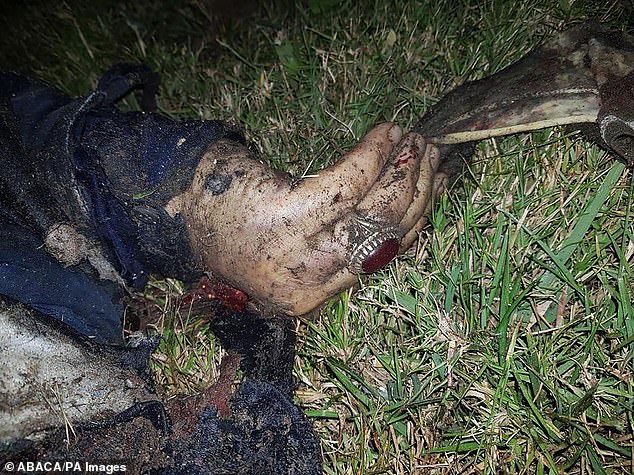 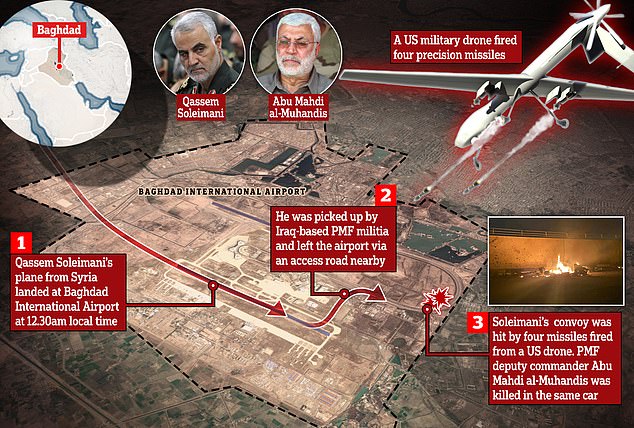 At a GOP fundraising dinner at his Mar-a-Lago estate in Florida days after the strike, he regaled in great detail how military officials counted down the seconds to the deadly strike.

The planning also involved a more extensive hit list than just Soleimani, according to Miller.

Miller said there was a ‘whole list of folks’ they planned to take out that day for what he described as ‘a decapitation approach to take down as much as they could.’

He did not give exact numbers of how many the US hoped to target.

Several officials said Shahlai was one target, while there two separate capture or kill operations planned against the Popular Mobilization Forces and other targets were also said to be in Syria.

It is not clear why these plans failed to materialize on the night.

The years-long planning culminated in the airstrike in the early hours of January 3.

Officials revealed new details about the logistics of the operation on the ground, with US Delta Force operatives posing as maintenance workers while Kurdish operatives dressed as baggage handlers at Baghdad Airport to welcome – and positively ID – the general when he landed. 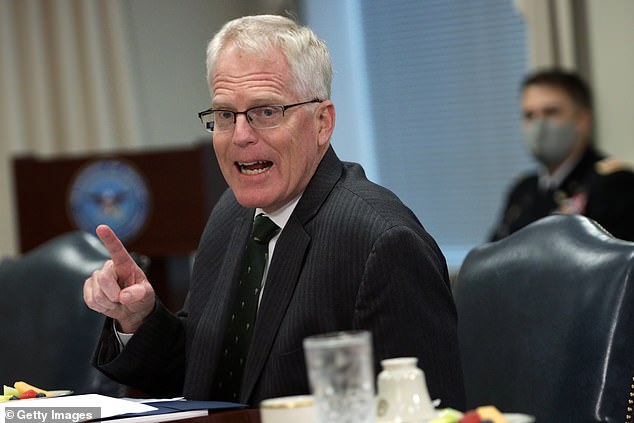 Former Acting Secretary of Defense Chris Miller (pictured) also revealed Soleimani had not been the only target, with the US government planning to take out several senior Iranian military and intelligence operatives that day

The Delta Force operatives started taking their positions in Baghdad in late December.

In the hours leading up to the strike, they positioned themselves around the ‘kill zone’ near the airport dressed as maintenance staff.

Kurdish allies posed as airport staff to confirm his identity ahead of the strike.

One US sniper had a camera that livestreamed back to the Delta Ground Force commander at the US Embassy.

Top officials including Hook were poised in the Situation Room in DC while Pompeo watched from the Pentagon with others. Trump was at Mar-a-Lago so as not to arouse suspicions.

The general switched phones three hours in the six hours before he boarded the flight from Damascus to Baghdad but Israeli officials helped trace his current phone and passed the intel to the US. 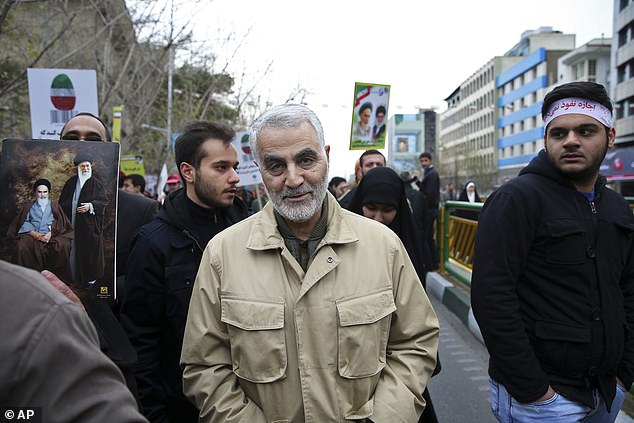 Officials revealed new details about the logistics of the operation on the ground, with US Delta Force operatives posing as maintenance workers while Kurdish operatives dressed as baggage handlers at Baghdad Airport to positively ID the general (pictured February 2016) 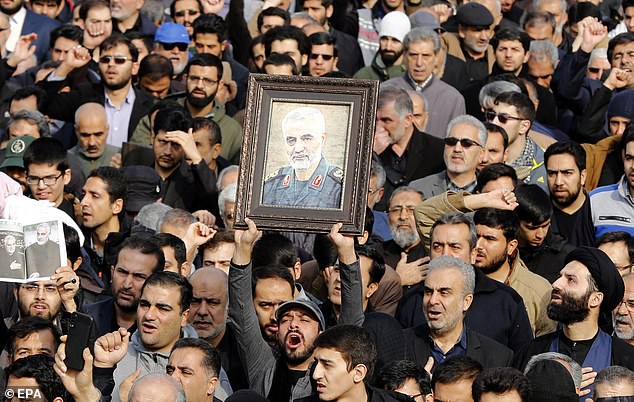 Iran retaliated five days later by launching ballistic missiles at US targets in Iraq but no US forces were killed.

While the Trump administration hailed the attack a victory for the US and the nation avoided a more damaging retaliation at the time, several officials said the event put an ongoing target on the head of those involved.

Miller told Yahoo the administration was aware of several ‘no-bulls**t threats’ of revenge attacks from Iran on high-profile US officials.

Milley, the chairman of the Joint Chiefs, Kenneth McKenzie, the CENTCOM commander, Pompeo and Hook faced the biggest risk of attack, he said.

Three other former officials echoed this, saying US intelligence learned of an Iranian hit list containing the names of specific officials targeted out of revenge for Soleimani’s death.

Miller said the threats to life are so serious that, in Trump’s final days in office, the White House and the Pentagon made last-minute plans over how they could ensure the protection of these targets after they left office.

This led to Trump allocating a new fund of $15 million to pay for protection of ‘former or retired senior Department of State officials’ who ‘face a serious and credible threat from a foreign power or the agent of a foreign power’.

One former White House aide said that money was specifically set aside for Hook and Pompeo saying the ‘Iranians are a serious risk to those two.’ 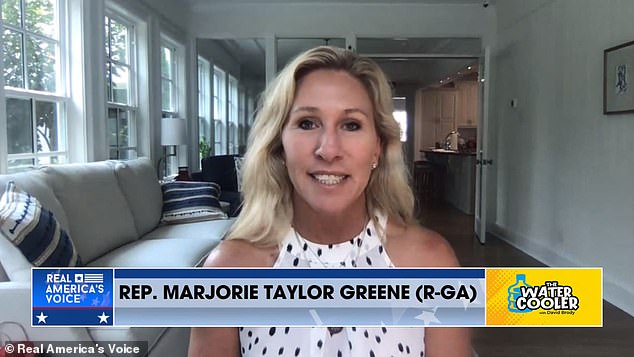 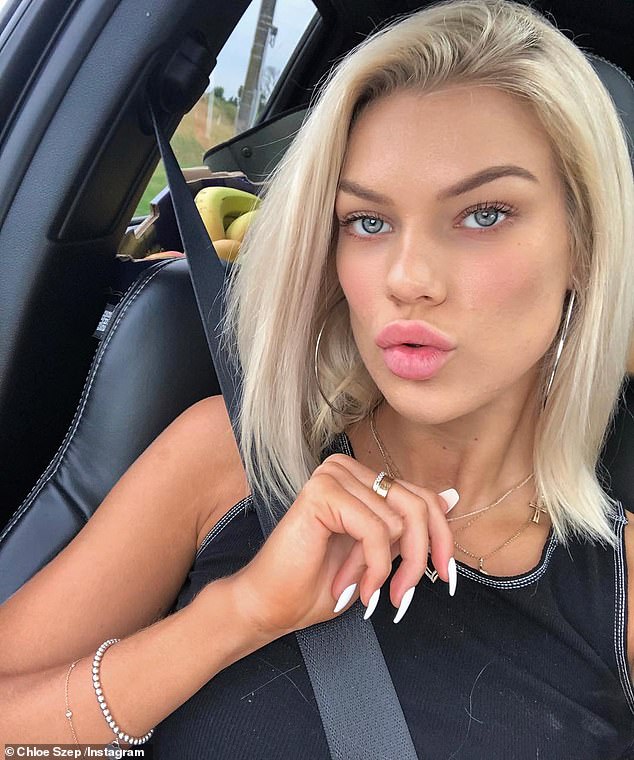 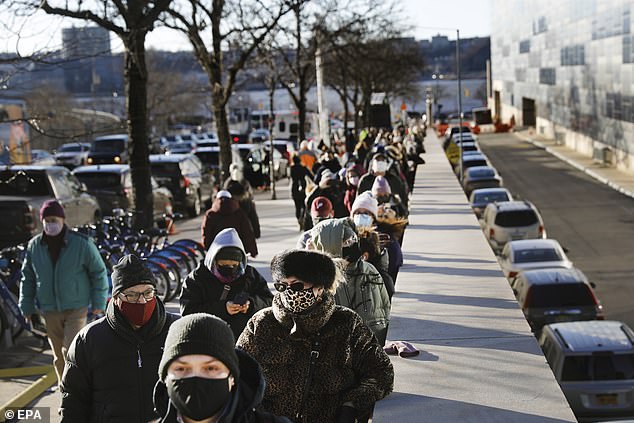