The Trump Organization has put the lease of its Pennsylvania Avenue hotel in Washington D.C. up for sale in a second attempt to dump the property, it has been reported.

Former President Donald Trump‘s company does not own the building – the Old Post Office Pavilion – but leases it from the General Services Administration, a federal agency.

The company has hired the Newmark Group to sell the lease, sources told the Washington Post. No price was revealed, but a previous attempt by the Trumps to sell the hotel in 2019 had a $500million asking price.

Trump, whose business was hammered by the COVID-19 pandemic, has $1.1 billion mountain of debt wrapped up in his skyscrapers and golf courses – with $900 million of it due within the next four years, Financial Times revealed in October.

The revelation also comes on the heels of an announcement that a grand jury has been formed for the investigations into Trump’s finances and whether he inflated and deflated the values of his assets to secure financing and avoid tax liabilities.

The Trump Organization has put the lease of its Pennsylvania Avenue hotel in Washington D.C. up for sale in a second attempt to dump the property 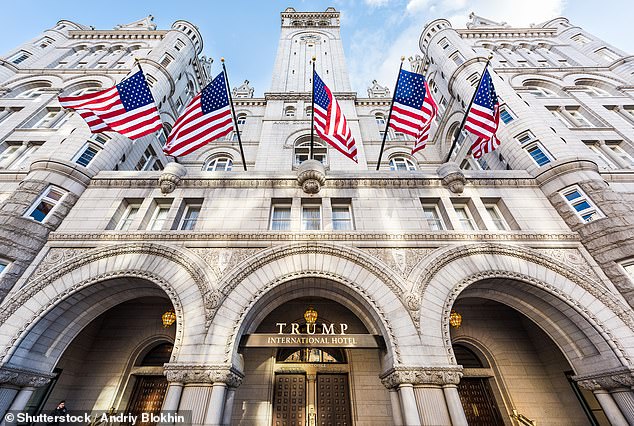 Trump, whose business was hammered by the COVID-19 pandemic, faces a $1.1 billion mountain of debt wrapped up in his skyscrapers and golf courses. PICTURED: Trump International Hotel in Washington D.C.

Manhattan District Attorney Cyrus Vance Jr., who is conducting one of the investigations into Trump’s business dealings, has been investigating the D.C. hotel among other properties, the Wall Street Journal reported last week.

It remains unknown what role the hotel may play in Vance’s investigation or a concurrent one by New York Attorney General Letitia James.

Trump’s company had previously tried to sell its lease for the Pennsylvania Avenue hotel in the fall of 2019 when rooms were half-empty, the Washington Post reported.

The hotel further suffered during the pandemic with revenues dropping 62 percent when luxury travel took a hit, in-part because of government shutdowns, and the listing was pulled, the outlet reported.

The 263-room hotel’s business also suffered because of Trump’s political stances and backlash from the Capitol riots on January 6, after which some experts told the Hollywood Reporter his company may never regain its standing.

If Trump is able to sell the lease, industry experts told the Washington Post that Trump’s name would likely be stripped from the building. However, the Hollywood Reporter noted that when the Trump Organization was looking to sell the lease in 2019 ‘any deal would stipulate the new owners keep the Trump name.’

Eric Trump, the executive vice president of his father’s business, said in 2019 that the company was looking to sell the lease for around $500 million after the company spent around $200 million to renovate the Old Post Office.

Deutsche Bank, who Trump reportedly owes as much as $340 million, lent the former president $170 million just for the failing Pennsylvania Avenue hotel.

DailyMail.com has reached out to the Trump Organization for more information and additional comment. 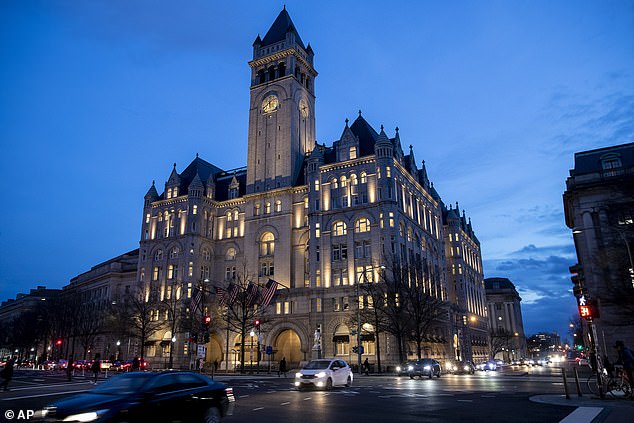 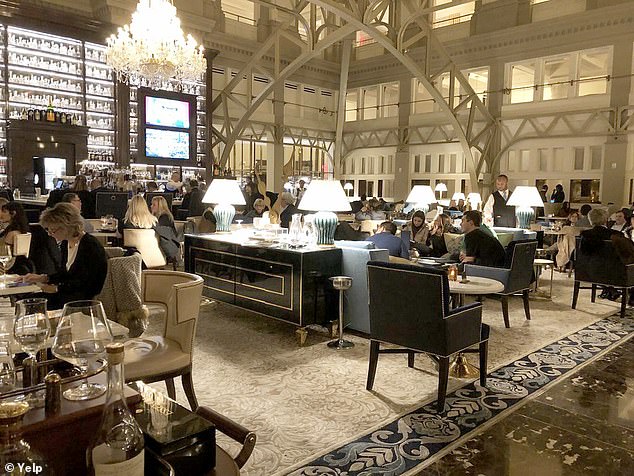 The hotel, frequented by his allies and supporters during his presidency, has suffered throughout the coronavirus pandemic and as a result of some of his political stances 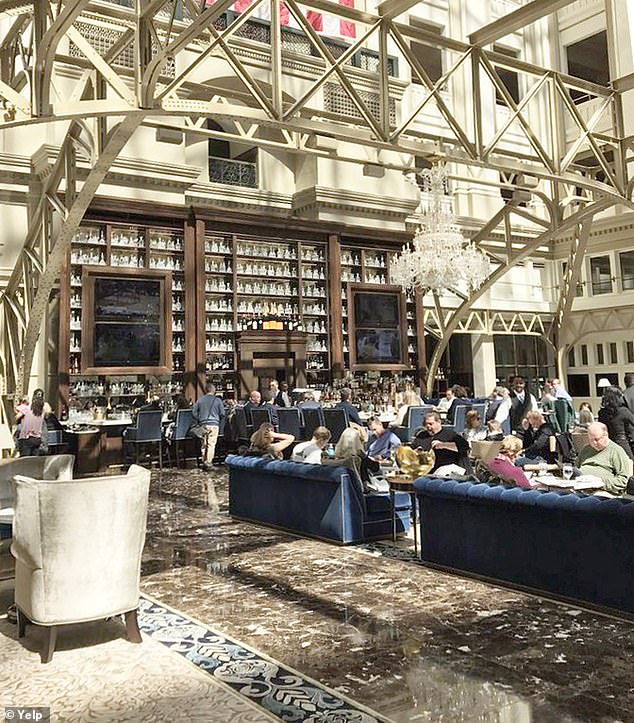 Deutsche Bank, who Trump reportedly owes as much as $340 million, lent the former president $170 million just for the failing Pennsylvania Avenue hotel

Throughout Trump’s presidency, Democrats criticized the General Services Administration and Trump after it was revealed that Saudi Arabian lobbyists booked 500 rooms at the hotel in just three months after the 2016 election.

The former president recently revealed that he has taken a $1.2 billion loan against his Bank of America skyscraper in San Francisco – his most valuable asset.

‘A loan of $1.2 billion has closed on the asset known as the Bank of America Building (555 California Street) in San Francisco, CA. The interest rate is approximately 2%. Thank you!’ Trump said in the statement.

Bloomberg reported that investors had bought the $1.2 billion of bonds in a deal that was described as ‘in line with other recent office-tower deals.’ 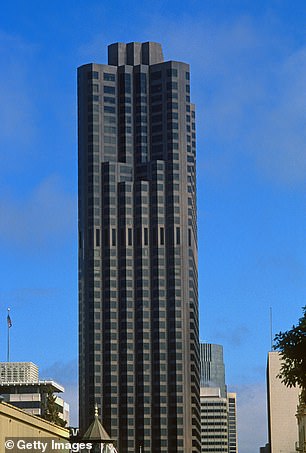 The Bank of America building, which is minority-owned by Donald Trump, is pictured in downtown San Francisco

The bonds were used to refinance a previous loan on the property. It gives Trump and the Vornado Realty Trust a payout of $617 million, the outlet reported.

The refinancing and payout came after multiple banks, previously used by Trump, severed ties with him in the wake of the Capitol riot.

Trump owns 30 percent of the San Francisco building which is majority owned by Vornado. The building, among the tallest in the city, is ‘the most valuable part of his portfolio’ and is worth about one-third of his $2.3 billion fortune, Bloomberg reported.

The Vornado Realty Trust issued a press release on May 10 announcing that the refinancing of the three-building campus had been completed and that it has the ‘sole decision-making authority.’

The loan replaces a previous $533 million loan that bore interest at a fixed rate of 5.10%, according to the company. That loan was scheduled to mature in September 2021 – when full payment was to become due.

According to the company, the new deal has a benchmark variable interest rate used by major global banks to lend to one another plus additional interest for different years throughout the term of the loan – rather than the previous fixed rate.

However, Vornado said that – in the first three years of the loan – the company said it swapped its share to pay a fixed rate of 2.26%.

Vornado said that its share of the net proceeds from the refinancing was about $454 million – meaning that the most the Trump could have seen was about $194 million, as noted by the Twitter account @southpaw. 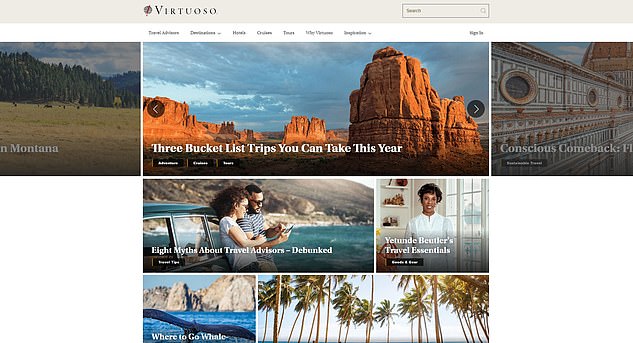 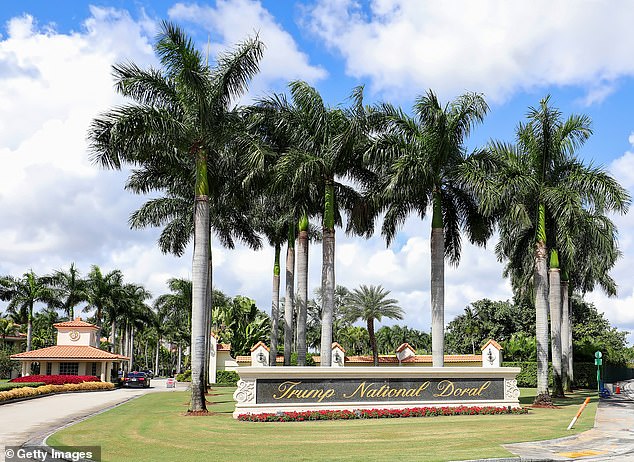 A sign for Trump National Doral Resort in Miami, Florida is seen t the entrance to the golf resort

A filing with the Securities and Exchange Commission in February shows that the company is currently redeveloping 555 California and 345 Montgomery Street for $66 million, Business Insider reported.

The outlet reported that, before Trump became president, he had also tried to sell his stake in the San Francisco properties.

Vornado later considered buying out Trump’s share of the building complex when banks and businesses cut their ties to him.

Trump’s largest liability is his 30 percent stake of 1290 Avenue of the Americas in New York City, for which he owes a debt of $285 million.

The debt is owed by the partnership, Trump and Vornado Realty Trust, but fluctuations in the value of the debt would directly impact his equity value in the properties.

The loan on the New York building was originally granted by Deutsche Bank, UBS, Goldman Sachs and the state-owned Bank of China but they sold it a long time ago and it is not clear who now owns the debt.

The Miami golf resort hemorrhaged $162 million between 2012, the FT reported.

In March, a luxury travel booking agency quietly dropped all Trump Hotels and resorts listings from its elite ‘invitation only’ services.

The agency had considered six of Trump’s 10 hotels partners in its Virtuoso network, which provides travelers with perks VIP treatment and special access, Washington Post reported. It was not immediately clear which six hotels were previously listed by the company, which has since removed them from the website.

Virtuoso previously promoted its ties with the Trump International Hotel in Washington, D.C. ahead of its opening in 2016, according to a press release at the time, saying it would join the ‘esteemed landmarks of our nation’.

Trump also has the Macleod House & Lodge in Scotland; the Trump Turnberry, also in Scotland; and Trump International Golf Links & Hotel in Ireland. 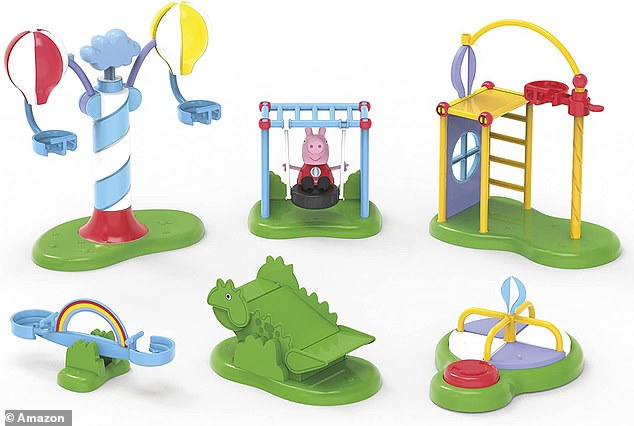 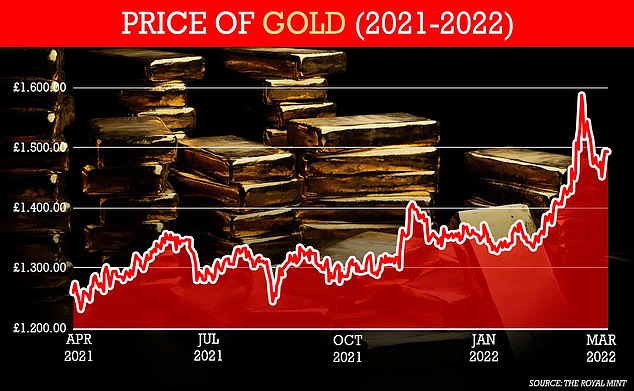 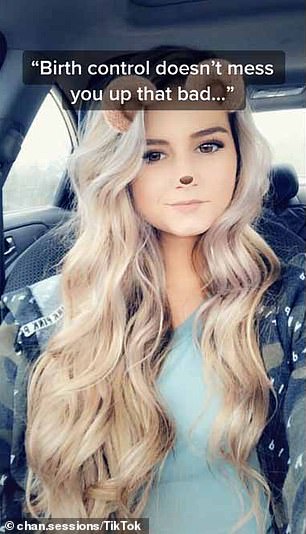