Former White House adviser Stephen Miller has slammed a plan from President Joe Biden as the ‘most radical’ bill ever written.

Miller, who served as Trump’s immigration architect, spoke for nearly five minutes lambasting the bill while appearing in an interview with Fox News‘ Laura Ingraham.

‘It is the most radical immigration bill ever written, ever drafted, ever submitted in the history of this country. It is breathtaking,’ Miller said.

‘As just a few examples, Laura, under this bill every single illegal alien in the country who merely submits an application to the US government, if they want to work, they are work authorized. Immediately.’ 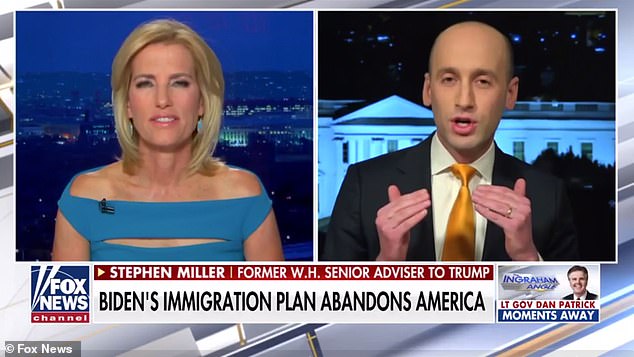 Miller, right, said that ‘the most insane thing’ in the bill is that it would allow illegal aliens deported by the Trump administration to reapply for citizenship 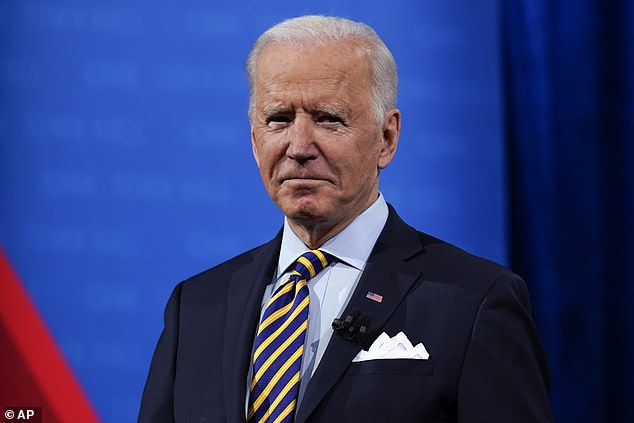 President Joe Biden unveiled his immigration plan on Thursday, a proposal that offers one of the fastest pathways to citizenship of any measure in recent years

Miller said that, under the text of the bill, employers are ‘immediately allowed to hire illegal aliens even if they haven’t submitted their application.’

‘When you have 20 million Americans who want full-time jobs right now, but because of the pandemic they can’t find them, illegal hiring is amnestied and illegal work is amnestied,’ he said.

Miller said that ‘the most insane thing’ in the bill is that it would order Secretary of State Antony Blinken to develop an application process to allow illegal aliens deported by the Trump administration to reapply for citizenship.

‘In the bill, it says anyone who has lived in the country for at least three years and was deported by Donald Trump can reapply,’ he said.

‘And, it orders the Secretary of State to develop a process to mail those applications out to the 200 countries in the world to where illegal aliens are deported.’

Miller called the bill a ‘full-scale attack on the very idea of nationhood.’

‘If you were trying to write a bill to eliminate the concept of having a nation, this is the bill you would write,’ he said. 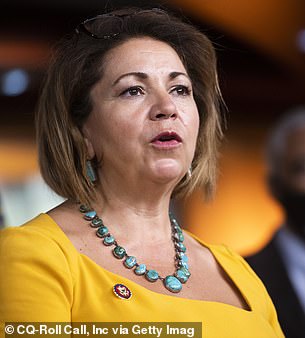 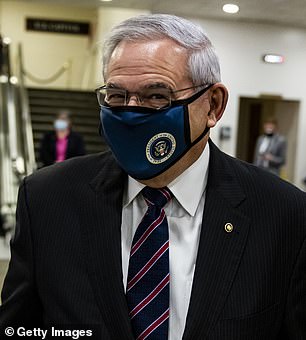 Biden tapped the children of immigrants take the lead in Congress: the legislation’s sponsors are Democratic Rep. Linda Sánchez of California, the sixth of seven children raised by Mexican immigrants, and Democratic Sen. Robert Menendez of New Jersey, the son of Cuban immigrants. 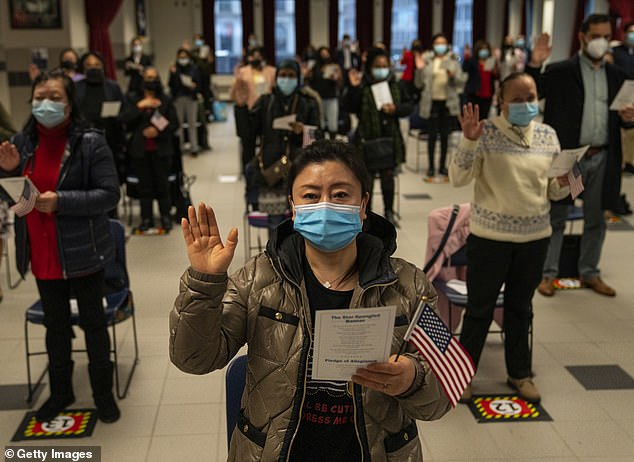 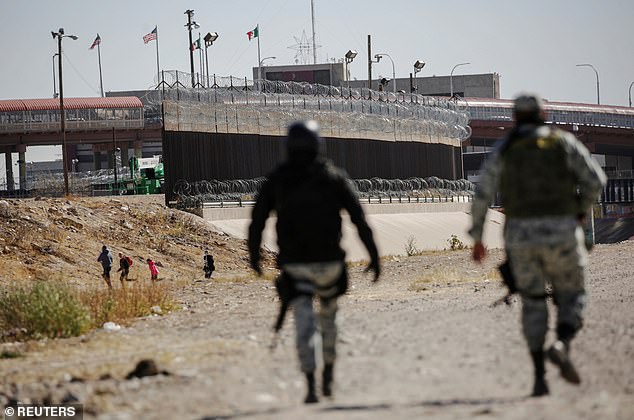 The bill contains no provisions on enhanced border security, which will make it a tough sell to Republicans on Capitol Hill – above migrants at the U.S. Mexico border flee agents 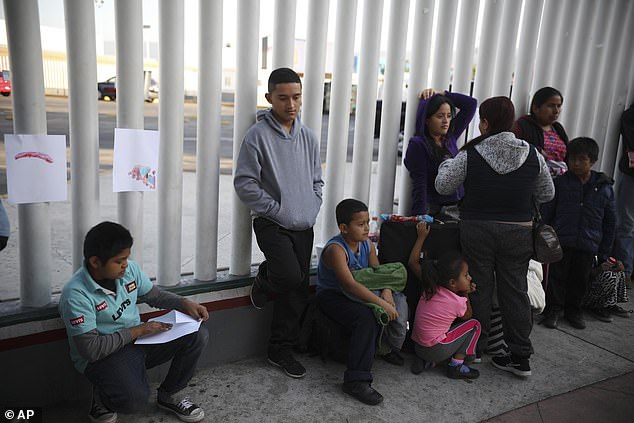 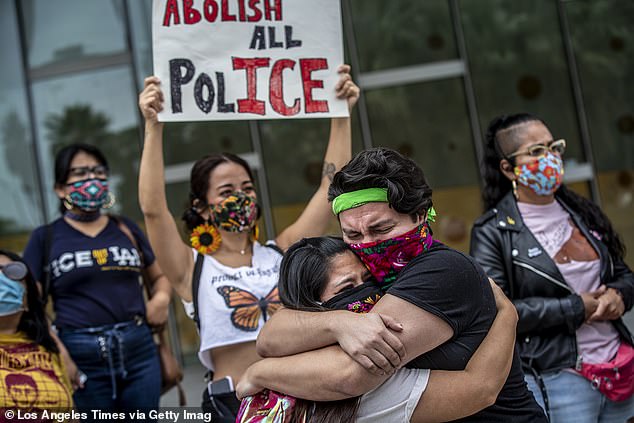 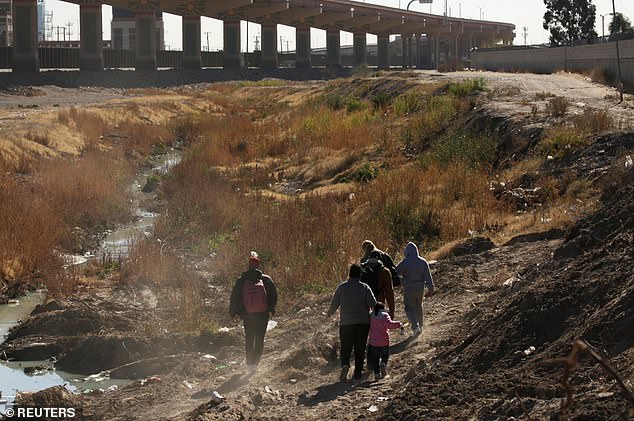 Migrants are seen on February 9 before crossing the Rio Bravo river to turn themselves in to U.S Border Patrol agents to request for asylum in El Paso, Texas

He added: ‘This bill is so crazy, Laura, that under its own terms if you came her on a student visa say six months ago, you dropped out of school, you failed to show up to class, you violated the terms of your arrival and you were supposed to go home and you didn’t go home and you were living here for just a few weeks even you can get full citizenship in this country.’

Miller noted that the bill would ‘eliminate’ a law passed by President Bill Clinton that establishes a waiting period to get free federal health care for people who get green cards.

‘It just deletes it right in the bill, it just says that portion of the law is gone,’ Miller said.

Miller said the bill also establishes a $50,000 fine if a federal worker refers an application to law enforcement because they are concerned what they see on it.

President Joe Biden unveiled his immigration plan on Thursday, a proposal that offers one of the fastest pathways to citizenship of any measure in recent years.

Congressional Democrats released the legislation Thursday on Capitol Hill. And, although their party controls Congress, with a 50-50 tie in the Senate it will be a tough slog for Biden’s plan, which will provide a pathway to citizenship for 11 million undocumented immigrants living in the United States.

Immediately provide green cards to farm workers, immigrants with temporary protected status and young people who arrived in the U.S. illegally as children, the so-called Dreamers

A five-year path to temporary legal status for others. If they pass background checks, pay taxes and fulfill other basic requirements, then, after three years, they can pursue citizenship

Eliminate the penalty barring those immigrants who live in the U.S. without authorization

Replace the word ‘alien’ with ‘noncitizen’ in law

Enhance technology at the border

The legislation’s main sponsors are Democratic Rep. Linda Sánchez of California, the sixth of seven children raised by Mexican immigrants, and Democratic Sen. Robert Menendez of New Jersey, the son of Cuban immigrants.

‘We have an economic and moral imperative to pass big, bold and inclusive immigration reform,’ said Menendez said in unveiling the 353-page legislation.

Menendez said Democrats have failed in the past because they have too quickly given in ‘to fringe voices who have refused to accept the humanity and contributions of immigrants to our country and dismiss everything, no matter how significant it is in terms of the national security, as amnesty.’

He noted he’s been speaking to Republican colleagues in an effort toward ‘putting the pieces of a puzzle together’ on a bill that would receive enough votes to pass.

He acknowledged the final product is likely to change significantly. But he also suggested that elements of the proposal could be included through a parliamentary maneuver in a budget bill that would only require 51 votes.

Sanchez pointed out the bill also addresses the ‘root causes’ of immigration.

‘Our border policy is broken, period,’ Sanchez said. ‘But this bill employs a multipronged approach that will manage the border, address the root causes of migration crack down on bad actors and create safe and legal channels for those who are seeking protection.’

Biden said in a statement Thursday that immigration reform is ‘long overdue.’

‘The legislation I sent to Congress will bring about much needed change to an immigration system where reform is long overdue,’ he said.

‘These are not Democratic or Republican priorities – but American ones.’ 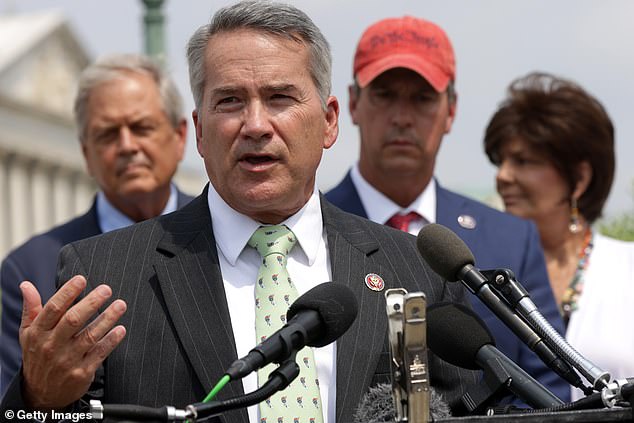 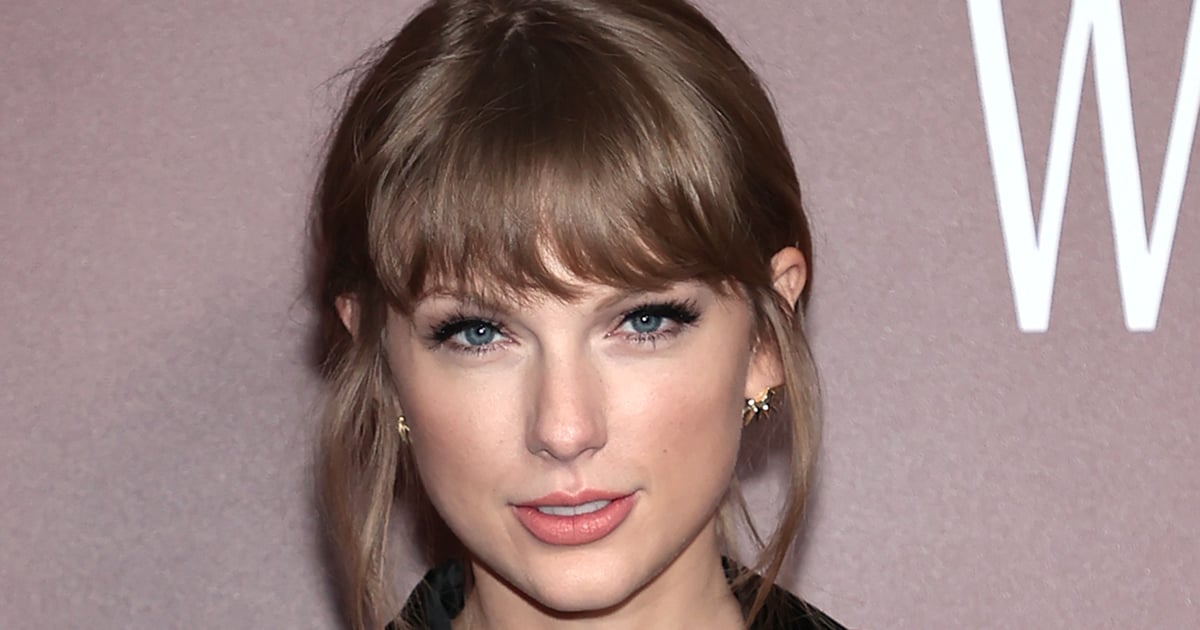 Merck’s antiviral COVID-19 pill can reduce risk of death from the virus by 30%, study finds 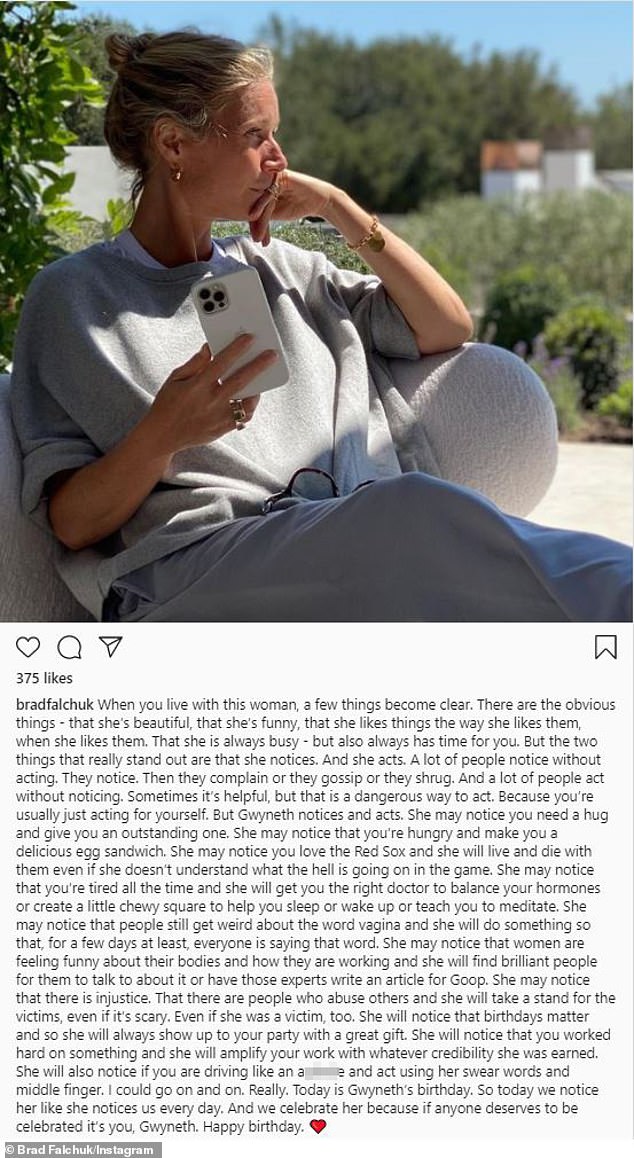