Miya Marcano, 19, was found dead on October 2 in Orlando, Florida

More than two thousand have packed into a Florida church to honor the life of Miya Marcano – the 19-year-old college student who was found murdered near her apartment complex in an attack believed to have been carried out by her coworker.

A crown was placed on Marcano’s coffin at Cooper City Church of God in Florida for the service, where the family asked for Marcano not to be forgotten.

Family, friends, and other mourners came from Trinidad, the Virgin Islands, and across the US.

‘We ask respectfully and expect that the media keep Miya’s name and story out there,’ her uncle Marc Marcano said before drawing the comparison to Gabby Petito, the van lifer who has swept the nation’s attention after she died by strangulation in Wyoming. 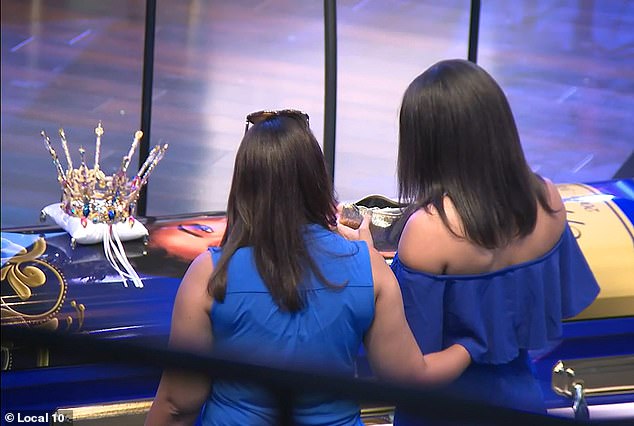 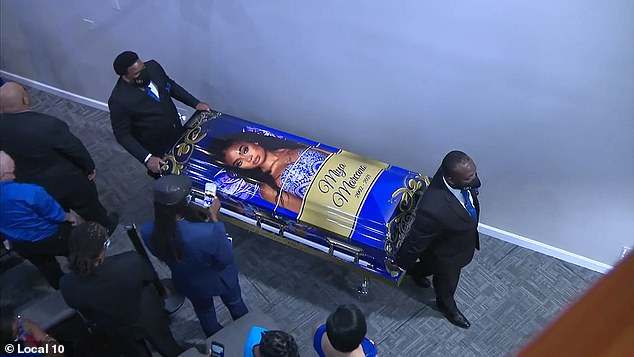 Hundreds of family and friends gathered in Cooper City Church of God on Thursday to mourn the loss of Miya Marcano, 19, who was tragically bound and murdered by a coworker. She had family and friends from Trinidad, the Virgin Islands, and the US in attendance 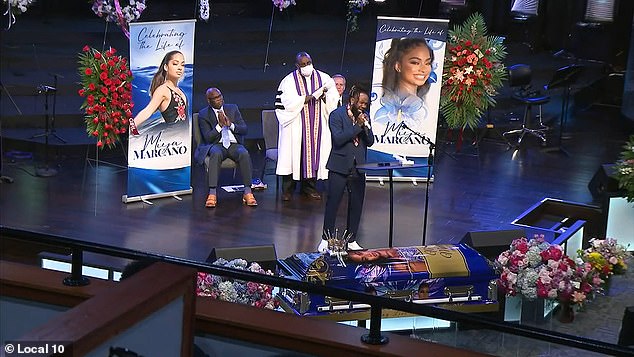 Her royal blue casket was adorned with a glittering crown and painting with a picture of her with her name written across it. Her family dressed in royal blue – her favorite color – and recalled memories of her at her funeral. There were also performances from some of her favorite singers, including Caribbean singer Skinny Fabulous, who wrote a song for her

‘Although we sympathize with the Petito family, Miya’s story is no different and deserves the same attention.

‘My niece did not deserve this, nor does any woman for that matter,’ Marc said.

Marcano’s royal blue casket had a painting of her with her name written across it. The church was decorated in royal blue, as well as family members, who wore the color, the 19-year-old’s favorite color.

At the service, family members remembered the ‘magnetic’ ‘vibrant butterfly’ Marcano was as they shared stories of her life.

‘Every since we were children, our bond was always unbreakable. it was always you and I,’ Miya cousin D’Mani Scarbriel said as he recalled cutting of her pigtails when they were small.

‘I remember the time when we were small and we were playing barbershop and I cut off your two pigtails.’

‘Baby girl, princess, uncle loves you and I know you’re here with me. And I know one day I’ll get to hear you say it back to me too,’ her uncle Marvin Marcano said at the service.

The lively service was filled with performances from Marcano’s favorite artists, including Caribbean singer Skinny Fabulous, who wrote a song for her, and Nigerian singer Lyrikal, according to the New York Post. 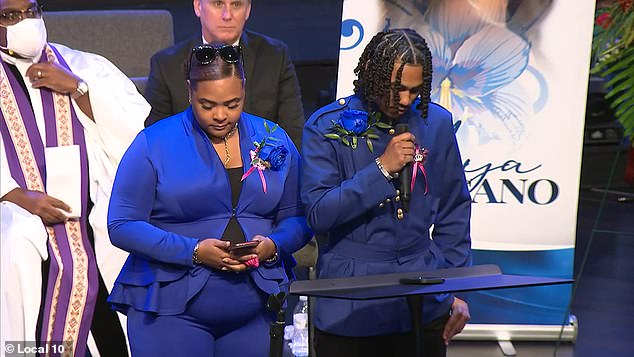 Family members spoke at her service, recalling memories of her ‘magnetic energy.’ Her cousin D’Mani Scarbriel (pictured) recalled their ‘unbreakable’ bond and cutting off her two pigtails. ‘I remember the time when we were small and we were playing barbershop and I cut off your tow pigtails,’ he said at her funeral 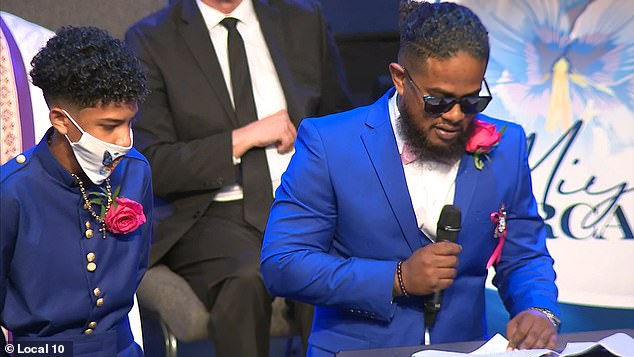 Her uncle Marvin (pictured) spoke directly to Miya, stating ‘I know you’re here with me’ and that he loved her. Her other uncle Marc asked the media to keep Miya’s story alive and that her ‘story is no different’ than van lifer Gabby Petito, whose death has received national attention

Marcano’s body was found on October 2 in Orlando, Florida, more than a week after she was reported missing and days after the man who is believed to have attacked her was found dead in his apartment on September 27.

Armando Caballero, 27, had allegedly made sexual advances toward Marcano, who did not return them.

Marcano, lived and works at the Arden Villas apartment complex in Orlando, Florida and was last seen finishing her shift there at around 5pm on Friday before she vanished and left behind signs of a violent struggle, including bloodstains on a pillow, police said. 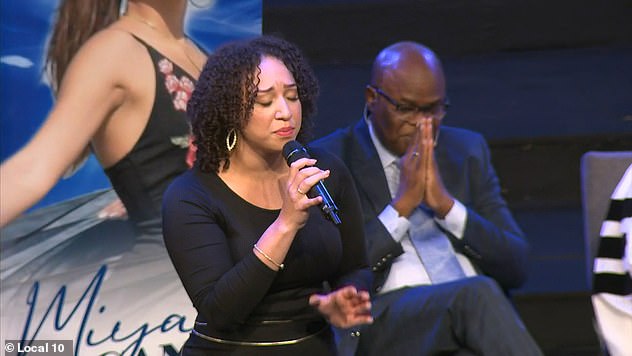 There were several performances throughout the service, including from some of her favorite artists Caribbean singer Skinny Fabulous, who wrote a song for her, and Nigerian singer Lyrikal attended

About a half-hour earlier, Armando Manuel Caballero, 27, a maintenance worker at the building, allegedly broke into her room and police were set to arrest him on suspected burglary charges when they found his body. He was also ‘infatuated’ with Marcano but she had repeatedly let him know she wasn’t interested in him, family members said.

He was found dead by apparent suicide in his apartment on September 27.

After a body was found, her family held a candlelit vigil outside her apartment, as they have for eight days since she went missing – this one, they said, will be the last.

Although it’s not the outcome they prayed for, Miya’s grandmother Violet Delville said that the discovery gives the family closure.

‘Miya, we found you. It’s not what we really wanted but I want you to know that we will always love you and we will continue to keep you in our hearts and we’ll never forget what you meant to us,’ she said this evening surrounded by candles, flowers and photos of her granddaughter.

‘Wherever you are, remember that we always love you and we will never, ever forget you,’ she said of the Valencia College sophomore.

‘We are devastated. We are angry and we know our lives have now been changed forever,’ Miya’s cousin, Caili Sue, told The Sun. ‘Everyone has been very somber since the announcement.’

Miya’s devastated parents did not attend the final vigil, according to NBC Miami. 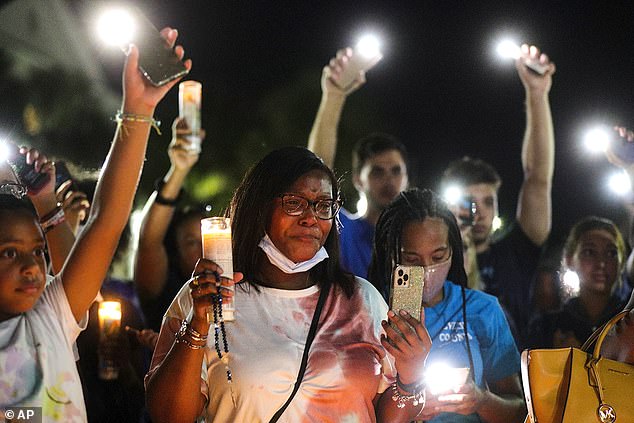 While Marcano was missing, her family held a candlelight vigil for her every night until her body was found on October 2 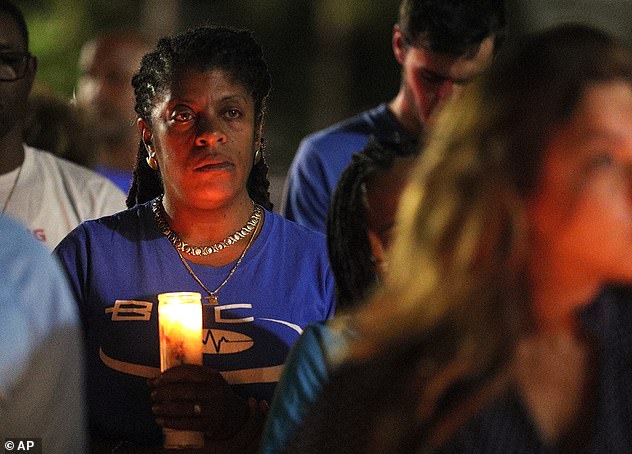 The last vigil was held on October 3, eight days after she went missing 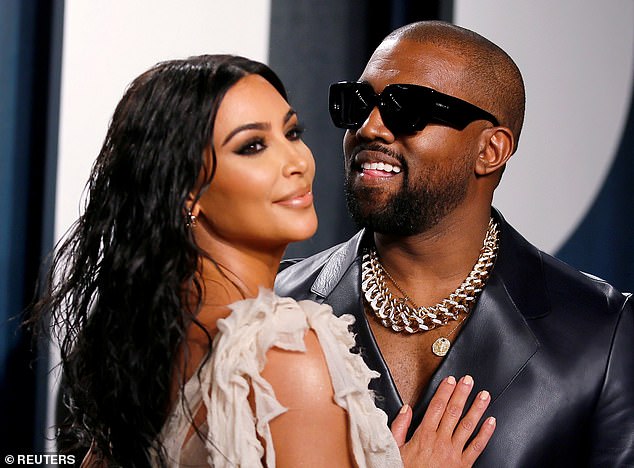 Trial in the killing of Ahmaud Arbery opening in Georgia 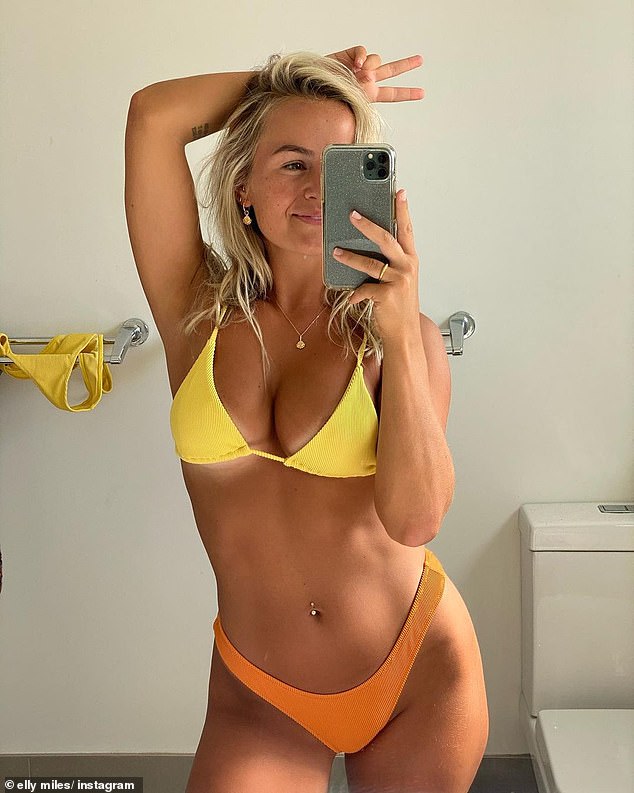 July 29, 2021
Check Also
Close
Recent Stories
Featured Posts
Biden says it would be a ‘disaster’ for Russia if Putin invades Ukraine
15 mins ago