A crooked collector is believed to have ordered the £1million raid on Arundel Castle to steal Mary Queen of Scots’ rosary beads, which she held as she was beheaded.

Experts think it likely a curator – possibly from overseas – commissioned the smash and grab on the historic West Sussex castle, which took place at 10.30pm on Friday.

Police attended the castle within minutes of the alarms being tripped and shortly after discovered an abandoned 4×4 vehicle on fire nearby in Barlavington – which forensic teams are examining to establish if it was part of the robbery.

Thieves took ‘many’ precious items after smashing their way into display cabinets, most notably the rosary beads Queen Mary carried to her death in 1587 when she was beheaded at Fotheringhay Castle for her complicity in a plot to murder Queen Elizabeth I.

A spokesman for Sussex Police said the rosary is of little value as metal. The force said: ‘As a piece of the Howard family history and the nation’s heritage it is irreplaceable.’

While Sussex Police said they could not comment further for ‘operational reasons’ experts said they believe the items will end up in an illegal private collection.

Treasures worth more than £1milion have been stolen from Arundel Castle, West Sussex, including gold rosary beads Mary Queen of Scots carried to her execution in 1587 (pictured with her bible) 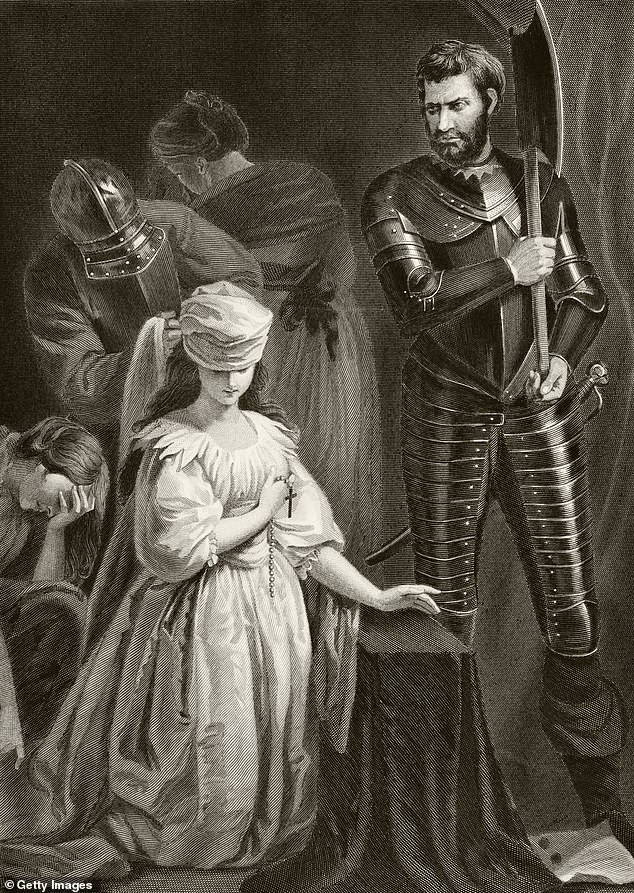 The execution of Mary Queen of Scots 8 February, 1587. She is seen holding the rosary beads as she was beheaded at Fotheringhay Castle for a plot to murder Queen Elizabeth I

Professor Kate Williams, a British History Professor at the University of Reading told ITV: ‘My personal hope is that the beads have been stolen for a collector because at least then they’ll be treasured and maybe resurface.

‘What the worry is is that they’ve been stolen like the other items in the cabinet because they’re gold and that would mean they’d be melted down to metal and we don’t see them again and that is really heartbreaking. ‘

Coronation cups given by the Sovereign to the Earl Marshal of the day and other gold and silver treasures were also taken from a smashed display case in the castle.

The case was on the public route around the castle and was ripped open just days after the castle reopened to visitors.

The theft is now being investigated internationally and has become the centre of a number of theories, including that the thieves could have been targeting the artefacts for the precious metal they contain – which could be sold on the dark web or melted down. 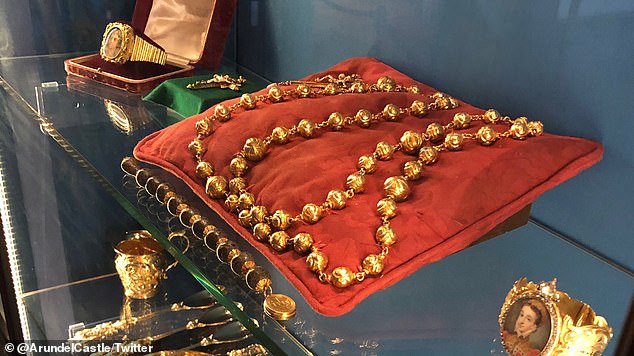 A Sussex Police spokesman said the rosary is of little value as metal, but of huge significance 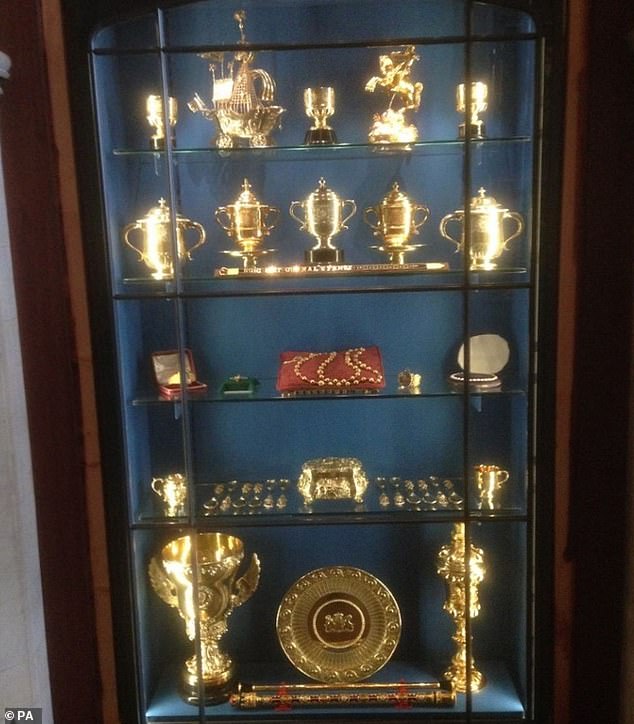 Alarms at the castle were tripped at 10.30pm and a display case (pictured above) was smashed so the thieves could get their hands on the treasures inside

Historian Marcus Cribb said: ‘Thinking of their team, who must have done everything they could to prevent such a crime, but sometimes, the criminals persist.

‘Sadly many items have been stolen but there are national and international teams that work to recover them.

‘Usually because big gangs are involved who use violence and traffic other items too, so if you can get them, it is good for all.

‘It is often for foreign collectors, who don’t care about the legality – I just hope they’re found.’

On King Francis II’s death in 1560, Mary left France, where she had spent much of her life until that point, and returned to Scotland. 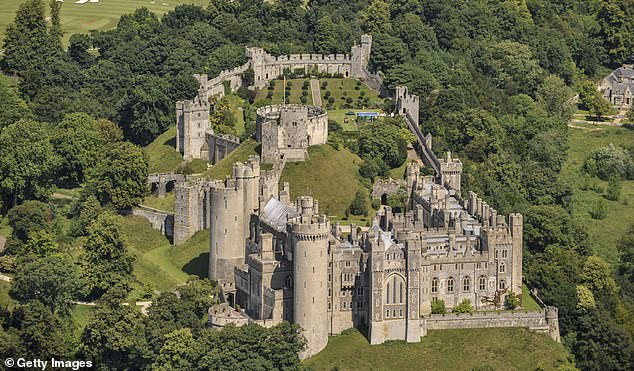 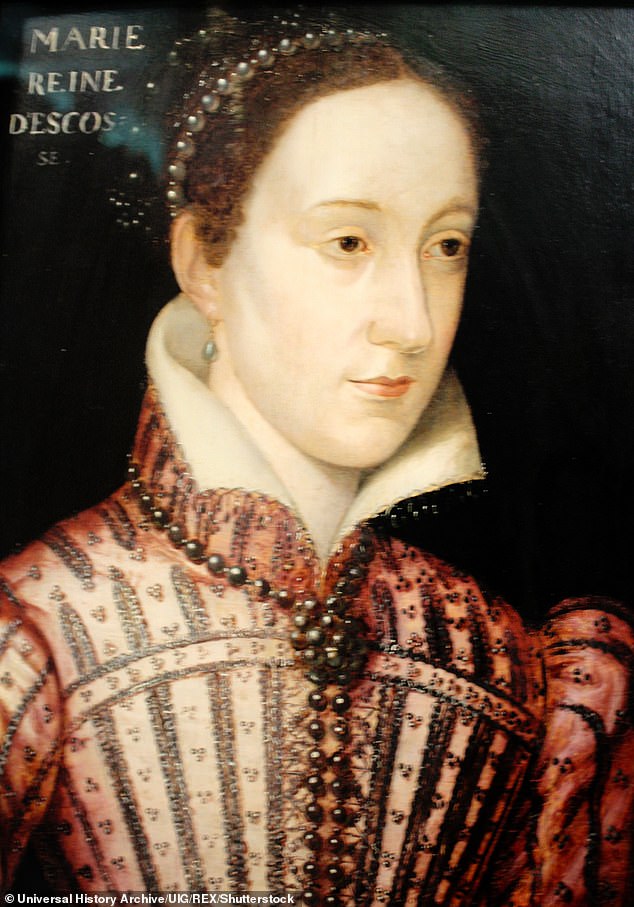 She eventually fled to England in 1568, where she became a political pawn in the hands of Queen Elizabeth I and was imprisoned for 19 years in various castles in England.

Mary was found to be plotting against Elizabeth I when letters written in code, from her to others, were discovered and she was deemed guilty of treason. She was taken to Fotheringhay Castle and executed in 1587.

A spokesman for Arundel Castle Trustees said: ‘The stolen items have significant monetary value, but as unique artefacts of the Duke of Norfolk’s collection have immeasurably greater and priceless historical importance.

‘We therefore urge anyone with information to come forward to the police to assist them in returning these treasures back where they belong.’

Detective Constable Molly O’Malley of Chichester CID said: ‘If you were in Arundel on Friday evening and saw any suspicious activity around the area of the Castle, please contact us either online or by calling 101, quoting Operation Deuce.

‘In addition, the castle only re-opened to visitors on Tuesday 18 May so if you were visiting during the past few days do you on reflection recall anyone behaving at all suspiciously?

‘If you are offered or hear of anyone offering for sale any of the items stolen, we would also like to hear from you.’

An ill-fated monarch: The life and times of Mary Queen of Scots up until her execution in 1587

Born on December 8, 1542, at Linlithgow Palace, Mary became Queen of Scots when she was just six days old.

As Hendy VII of England’s great-granddaughter she was next in line to the English throne, after Henry VIII’s children.

She was due to marry Henry VIII’s son, the future Edward VI, after Scottish nobility decided to make peace with England. But it was opposed by the Catholics and she was taken to Stirling Castle. 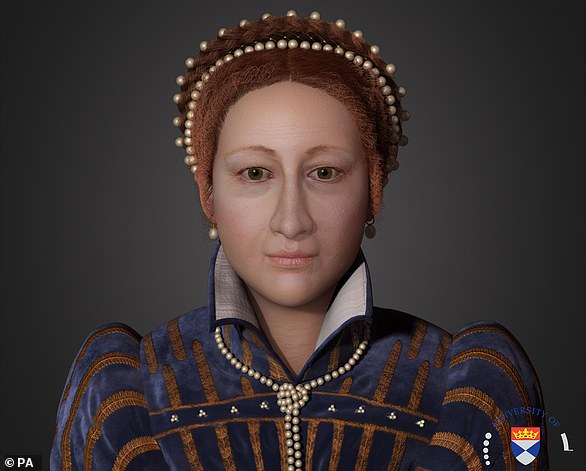 He succeeded to his father’s throne in 1559, making Mary Queen of France as well as Scotland. However, King Francis II’s reign was brief and he died in 1560 as a result of an ear infection.

The following year Mary decided to return to Scotland, which was now a Protestant country, after religious reforms led by John Knox.

She was a Roman Catholic and was assured by her half-brother Lord James Stewart that she would be allowed to worship as she wished when she returned in August 1561.

At first she ruled successfully and was advised by James and William Maitland of Lethington. But her marriage in 1565 to her second cousin Henry, Lord Darnley (who was the great-grandson of Henry VII), triggered a series of tragic events.

Darnley, who was spoilt and petulant, had became the focus of her enemies and their relationship became difficult. The birth of their son, James, did little to improve it and when Darnley was murdered in 1567, people began to suspect she was involved.

Her marriage three months later to the Earl of Bothwell – who was generally believed to be the murderer – brought her ruin with Protestant Lords rising against her in a battle at Carberry Hill, near Edinburgh, on June 15, 1567.

She later surrendered and was imprisoned in Lochleven Castle, Kinross-shire, and forced to abdicate in favour of her son. Bothwell had fled but was arrested and held prisoner until his death.

Mary escaped from Lochleven in 1568 and after another failed battle went to England where she hoped Queen Elizabeth I would support her cause, but she was kept in captivity in the country for 19 years.

A number of Roman Catholic plots against Queen Elizabeth led her ministers to demand Mary’s execution.

She was executed at Fotheringhay Castle in Northamptonshire on Feburary 8, 1587, aged 44.

Mary Queen of Scots was buried in Peterborough Cathedral but in 1612 her son James VI had her body exhumed and placed in the vault of King Henry VII’s Chapel in Westminster Abbey. 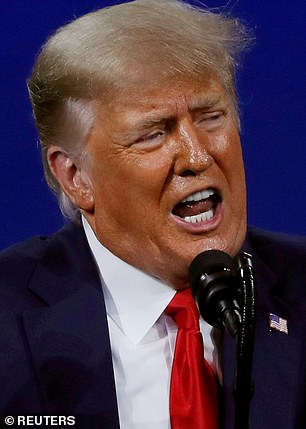 Trump lashes out at Dr. Fauci AGAIN, mocks him for weak first pitch at Nationals game 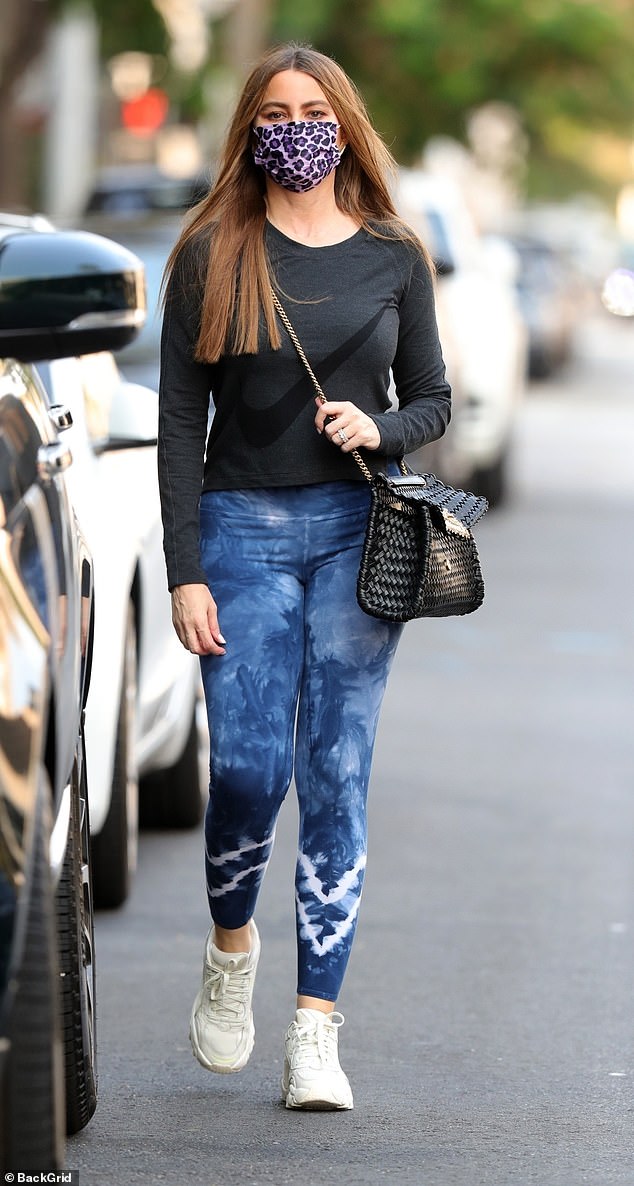 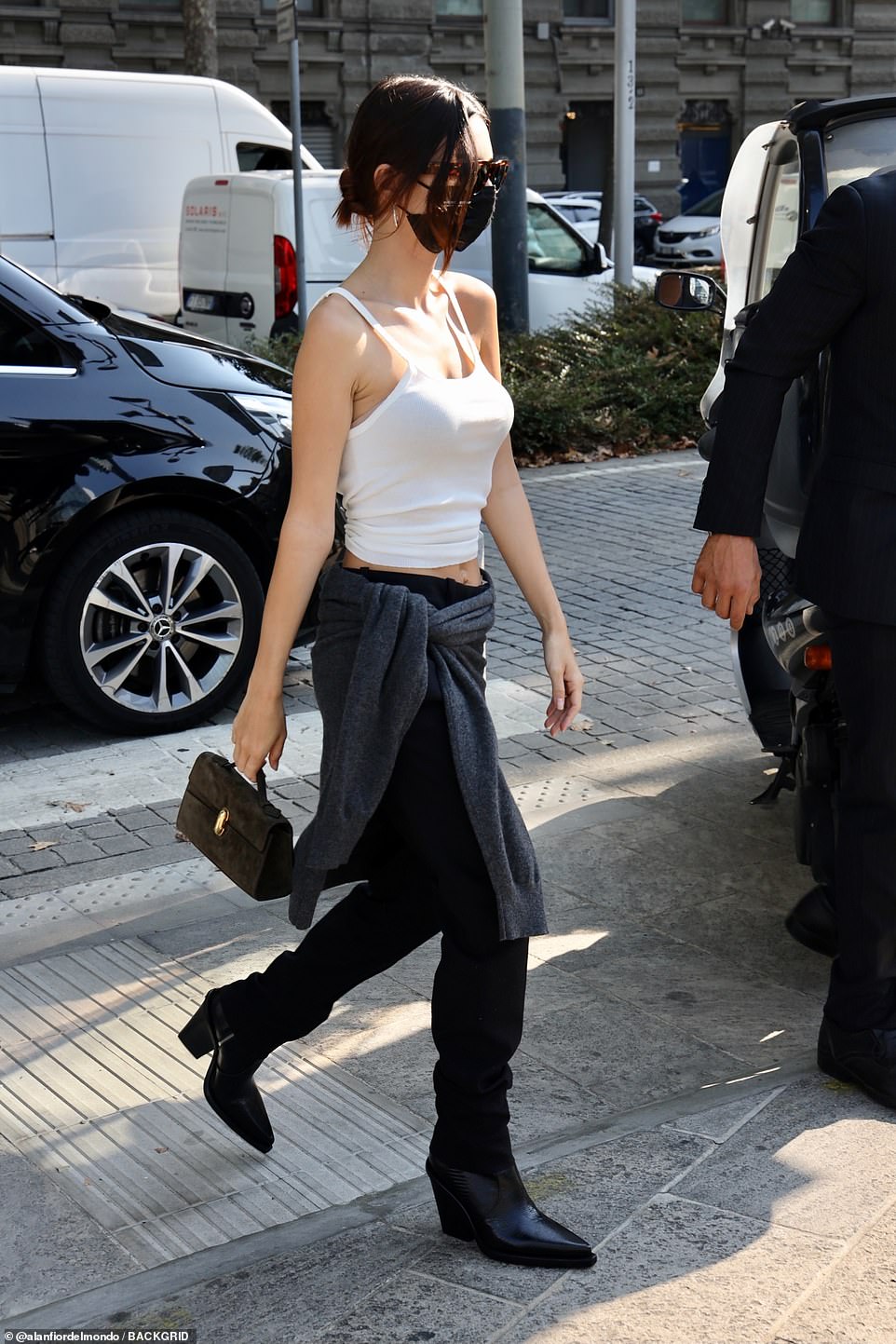 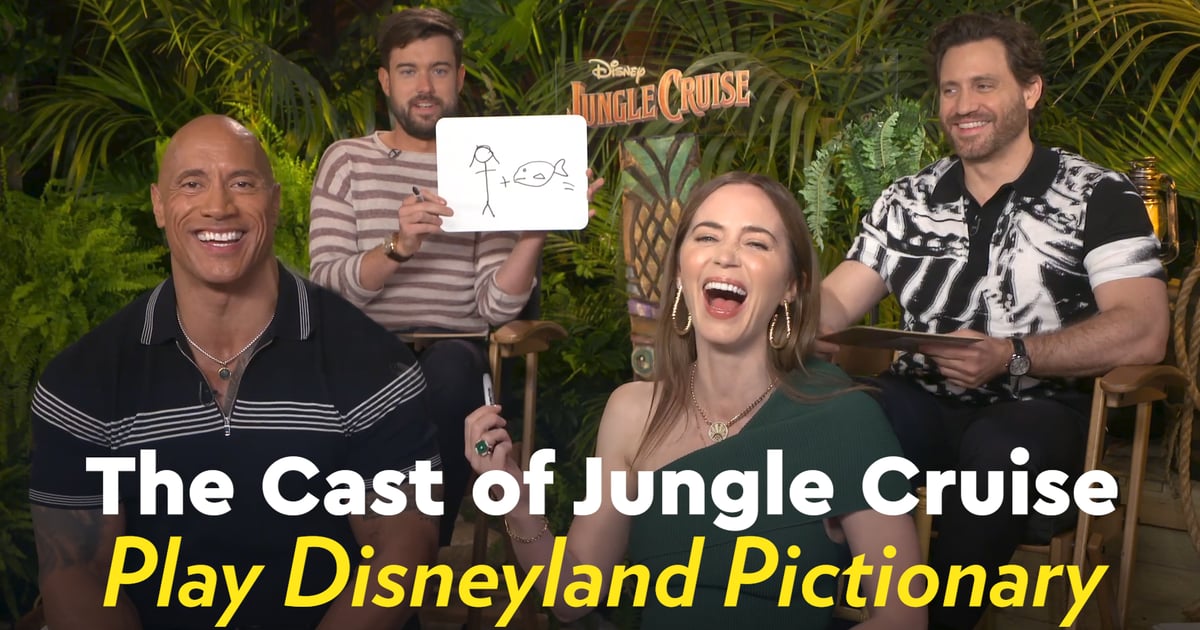