Ted Cruz led a group of Republican senators on a late night march along the Rio Grande River on the U.S.-Mexico border to hunt for migrants in a trip Democrats are blasting as a ‘political stunt.’

The Texas senator is leading one a dueling group of lawmakers to the border on Friday to visit facilities holding migrant teens.  Democratic Rep. Joaquin Castro of Texas is leading a group of House Democrats on their own trek.

The Republican senators are in the Rio Grande Valley to draw attention to what they call President Joe Biden‘s ‘border crisis.’ The Biden administration repeatedly has refused to describe the situation as a ‘crisis’ amid record high surges of migrants. The Rio Grande Valley is seeing some of the largest numbers of migrants crossing into the U.S.

Cruz posted videos on his Twitter feed showing him on the bank of the Rio Grande in the dark, surrounded by tall grass or weeds, watching what he claims were smugglers trying to get migrants across the water and into the U.S.

According to the latest data available from U.S. Customs and Border Protection (CBP), Border Patrol agents captured 100,441 migrants in February along the U.S.-Mexico border. That’s a 28% increase from January, when 78,442 were reported. 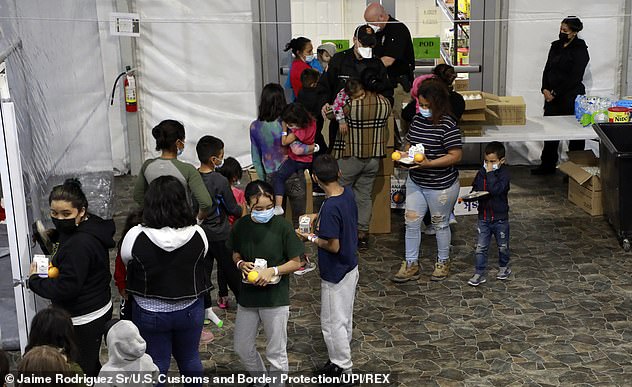 Senator Cruz and Democratic Rep. Joaquin Castro of Texas are leading dueling groups of lawmakers on tours of border facilities on Friday, including this one in Donna, Texas 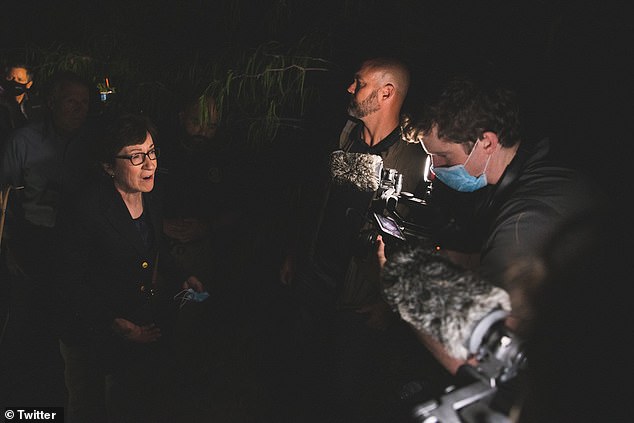 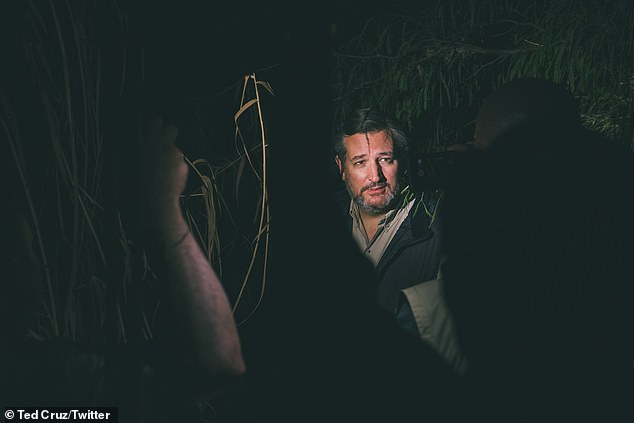 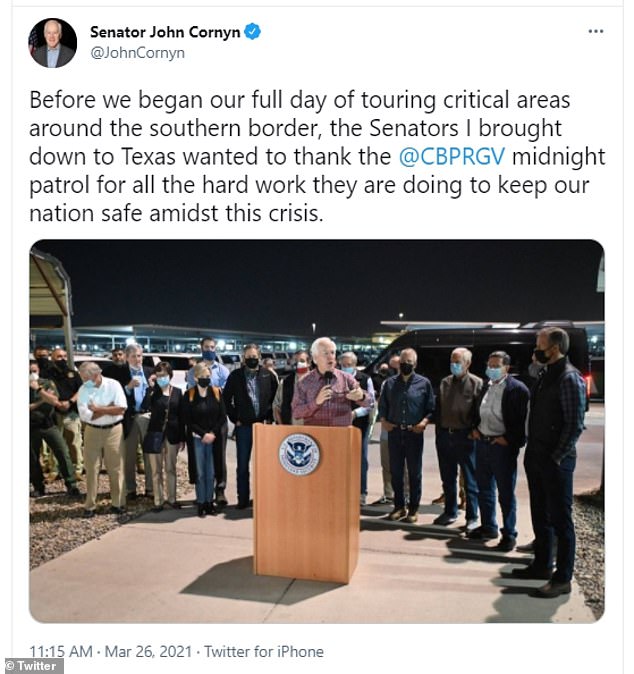 Republicans have hammered Biden about the surging numbers, which was the theme of the lawmakers’ trip.

Cruz blasted Biden’s policies for the increase in migration. Republicans claim it was Biden’s executive orders that rolled back stricter border control policies put in place by Donald Trump that led to the surge.

‘This is a humanitarian crisis,’ the Texas senator said. ‘It’s a public health crisis. The illegal immigrants who are being released, they’re testing positive for COVID-19 at a seven times higher rate than the American population. And it’s a national security crisis. And it’s time for the Biden administration to put an end to it. And stop sanctioning lawless chaos on our southern border.’

And the Senate Republicans official twitter account posted photos and an update from the expedition: ‘1:00AM on our southern border. 18 Senators are here with Border Patrol on their night shift. We saw the massive influx of migrant crossings. Countless women + children. We were heckled by cartels. This is a humanitarian crisis. And Joe Biden needs to address it immediately.’

Cruz and the 18 Republican senators also will tour a US Customs and Border Protection facility in Donna, Texas, that is reportedly overwhelmed with the number of unaccompanied minors, many of whom are sleeping on the floor or don’t have enough food.

Photos released by CBP showed children sleeping on mats on the floor, with foil blankets. Members of the media have not ben allowed in that shelter although lawmakers and lawyers have been and they reported back on the crowded conditions. 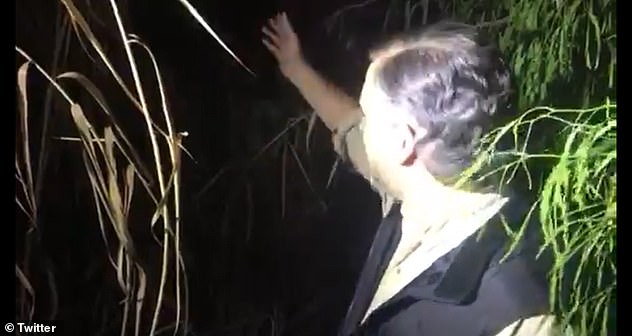 In the videos posted to his social media account, Senator Ted Cruz claimed he could see smugglers across the Rio Grande river taunting the senators and border agents 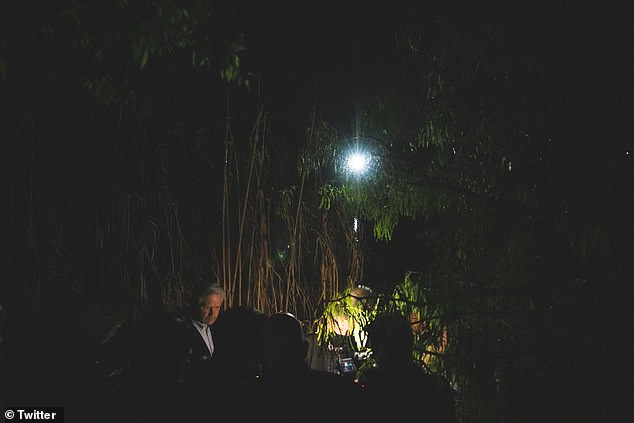 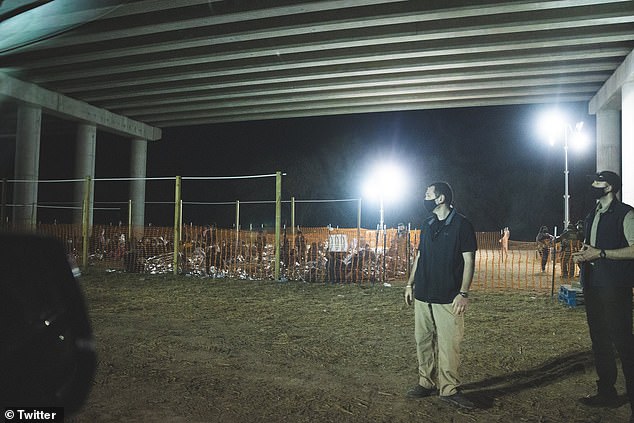 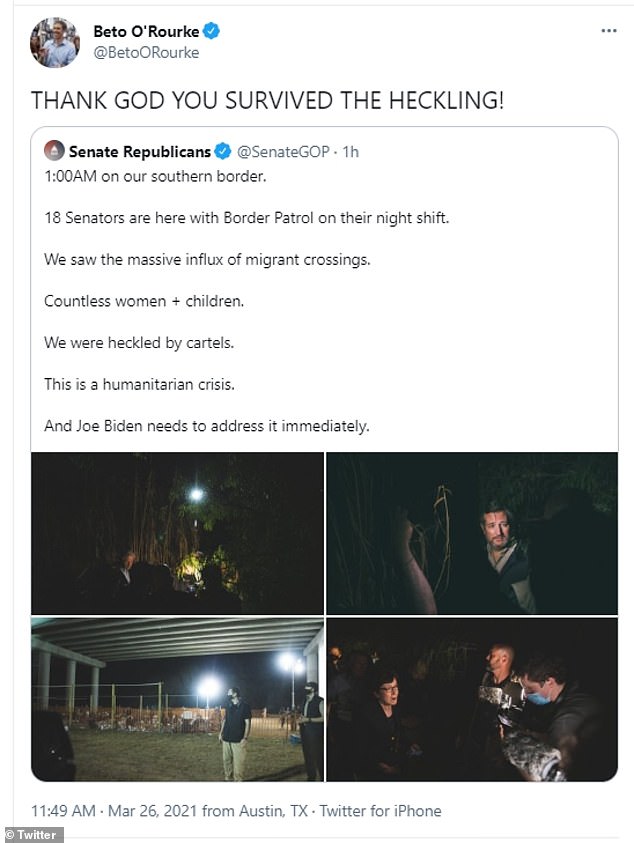 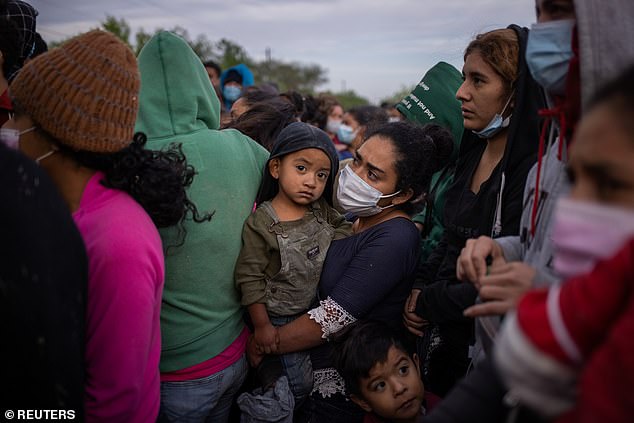 The Biden administration is dealing with a surge in migrants at the border – above Keylin, an asylum seeking migrant from Honduras, holds her three year old son Olban amid dozens of others as they await to board a U.S. border patrol bus to a processing facility after they crossed the Rio Grande river 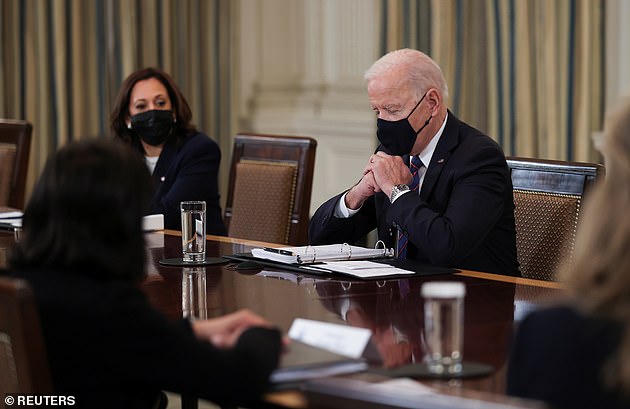 The HHS facilities – in contrast to the ones run by CBP – are equipped to provide medical services, sleeping quarters and other support while case managers work with children to unite them with family members or sponsors in the United States.

More than 16,500 unaccompanied migrant children were in federal custody as of early Wednesday, according to CBS News. More than 11,500 of those children were being housed in shelters and emergency housing sites, while another 5,000 were stranded in overcrowded Border Patrol facilities.

The children are supposed to be held from three days by border patrol and then transferred to more permanent facilities run by HHS. But the overcrowded conditions have delayed transfers with children being held for 10 days or more.

Biden on Thursday said he would be ‘flattered’ if migrants were coming to the United States because of him as he was grilled about his border policy during the first formal press conference of his presidency.

He also ridiculed the idea the surge in migrants at the border is because he’s a ‘nice guy.’

Biden was referring to Republican arguments that the migration surge is because of his more ‘humane’ policies. The president claimed he was dealing with the fallout from his predecessor, saying Trump dismantled the immigration system.

‘He dismantled all the elements that exist to deal with what has been a problem and has continued to be a problem for a long time,’ Biden said of Trump. ‘In fact, he shut down the number of beds available.’

Biden also repeated his argument that Trump is to blame for the thousand of migrants trying to cross into the United States as his administration struggles with what to do in the surge of migrant crossings.

He also committed to letting the press into the shelters on the border holding migrant children, including the shelters where there is overcrowding and not enough bed.

And he said he hasn’t visited the border yet because of the large amount of people that travel with him as president. He has sent administration officials to the border to observe the situation and report back.

‘One of the reasons I haven’t gone down, my chief folks have gone down, is I don’t want to become the issue. I don’t want to be bringing all the Secret Service and everybody with me to get in the way. So this is being set up and you will have full access to everything once we get this thing moving,’ he said. 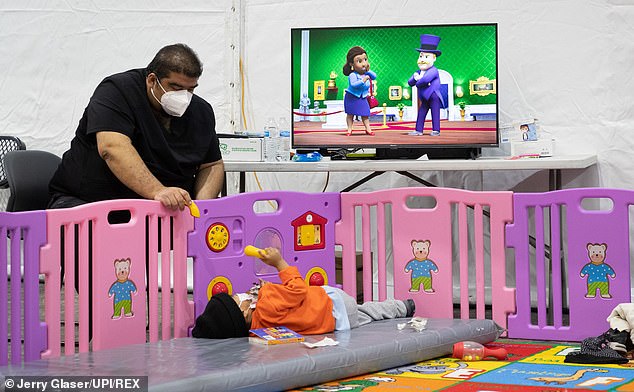 View of the U.S. Customs and Border Protection’s temporary processing facilities in Donna, Texas, where migrant children are being held 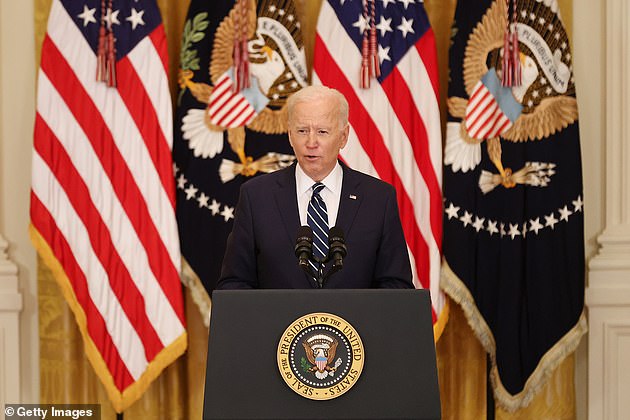 Biden has put Vice President Kamala Harris in charge of his border policy.

He announced Wednesday he has asked Harris ‘to lead our efforts’ with Mexico and other nations that need help in ‘stemming’ immigration.

He described her as the most qualified person for the job, pointing to her work as state attorney general of California. It is the first time Biden has put his vice president in charge of a specific issue and, in choosing the person he calls the last in the room, Biden indicated how important an issue the border has become.

‘I’ve asked her, the VP today because she’s most qualified person to do it to lead our efforts with Mexico and the northern triangle and the countries that need help in stemming the movement of so many folks stemming migration to our southern border,’ he said.

‘She’s most qualified person to do it to lead our efforts,’ he said.

On Thursday, Customs and Border Protection revealed that a nine-year-old child from Mexico drowned while attempting to cross the Rio Grande river to reach the United States.

According to CBP officials, the nine-year-old died last Saturday and was in the company of two other people while trying to cross the Rio Grande.

All three reportedly lost consciousness while wading through the water. 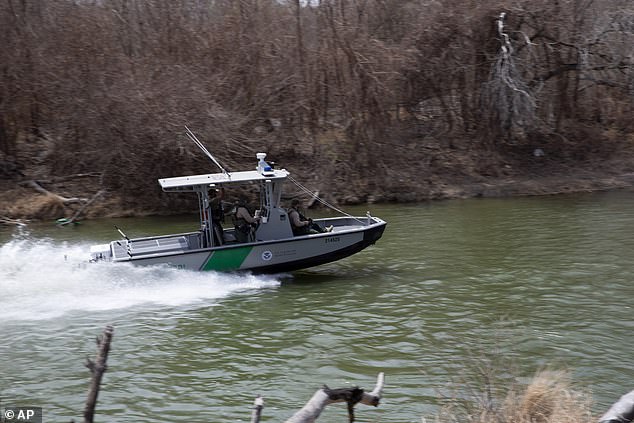 A nine-year-old child from Mexico has died while attempting to cross the Rio Grande river to reach the United States last Saturday. Thousands of migrants have made the treacherous journey across the river that divides the United States and Mexico. CBP officials patrol the water on Wednesday

The two others – a grown woman from Guatamala and a three-year-old child from Mexico – were able to be revived. The nine-year-old, whose gender has not been disclosed, was pronounced dead.

The tragedy came just four days after two other migrants drowned in the Rio Grande.

Shocking video from that incident showed three individuals, believed to be from Honduras, struggling to stay afloat in the rushing waters.

One of the migrants could be heard saying ‘help’ in Spanish as U.S. Border Patrol agents were seen standing on the shore.

Witness Jesús Vargas told Telemundo that he used a fishing rod to help one of the migrants – a 13-year-old – out of the water.

He claimed the other two drowned due to the strong current. CBP officials confirmed their deaths. 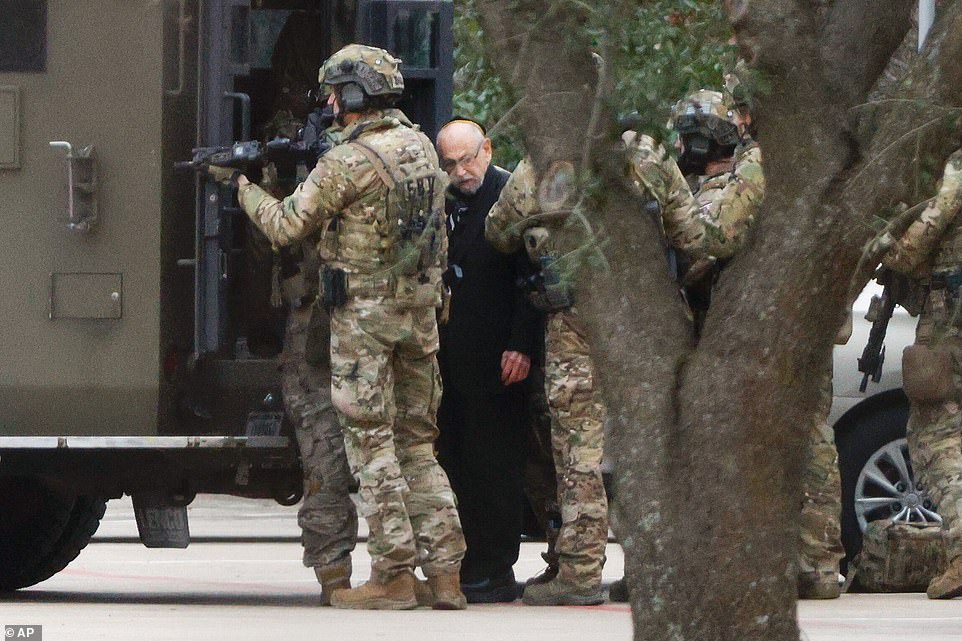 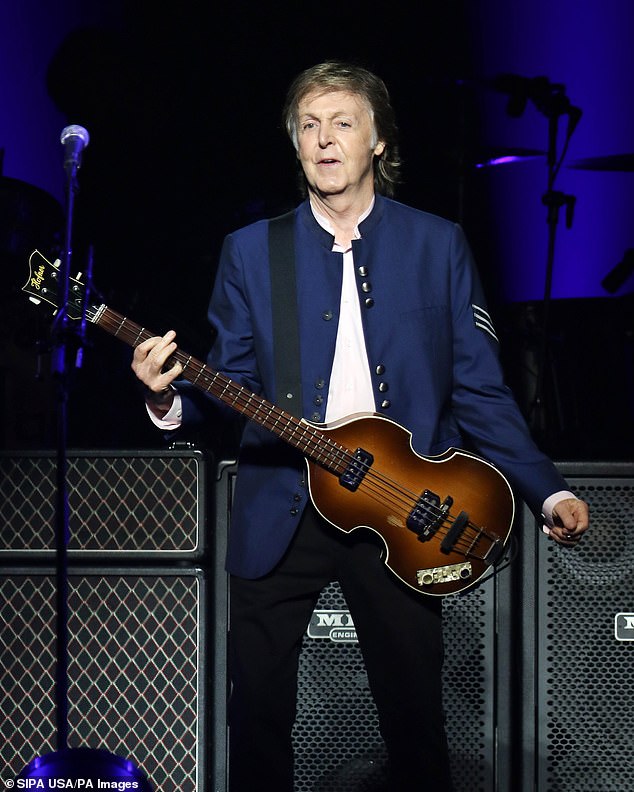 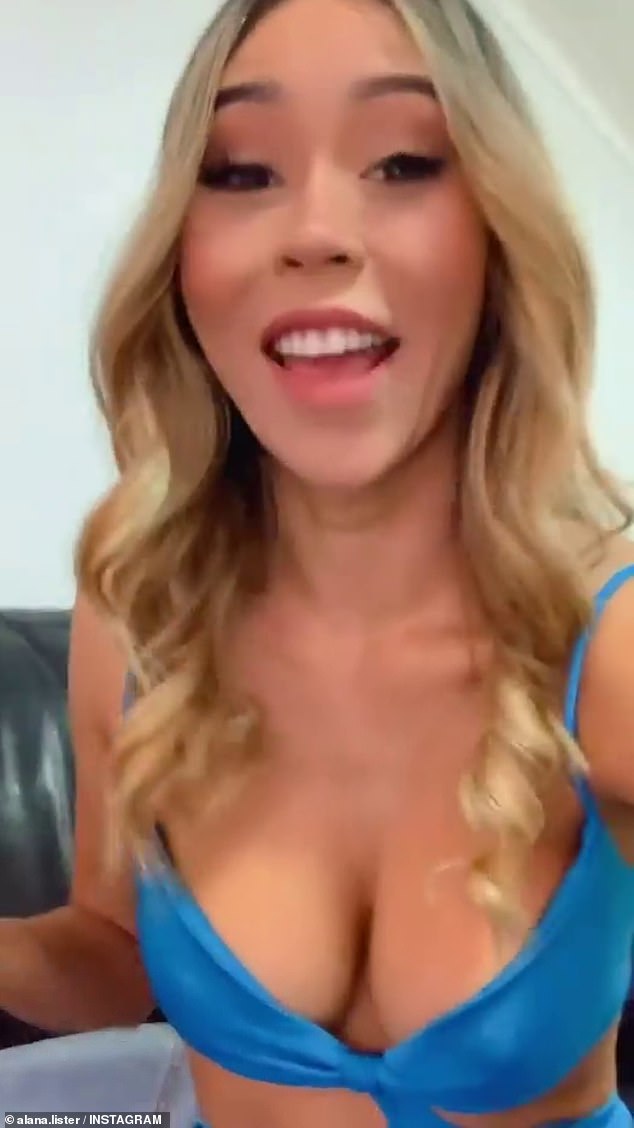 MAFS: Alana Lister flaunts her curves in a plunging dress on her 31st birthday 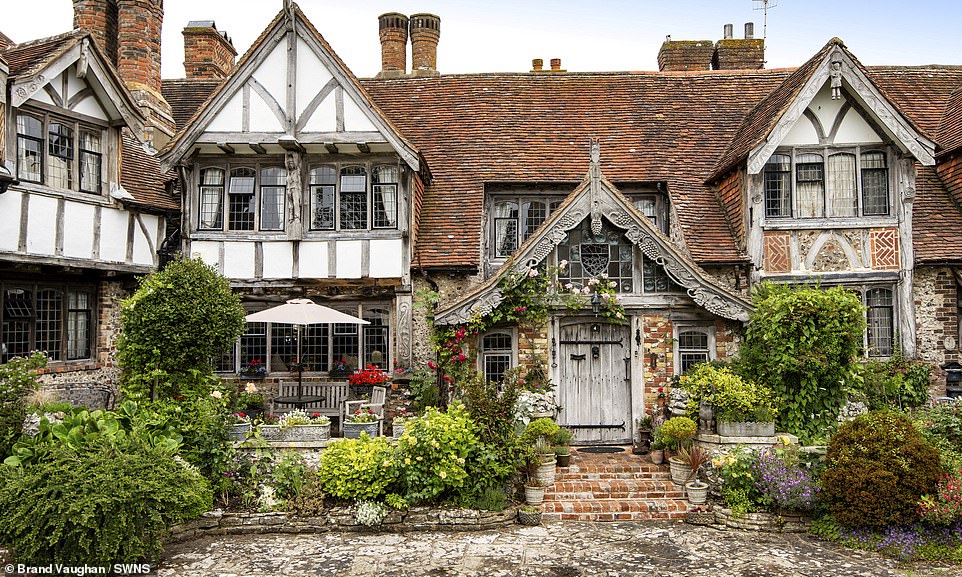