More than 50 million people across eight states in the western U.S. were under Excessive Heat Warnings and Heat Advisories on Tuesday, as a heatwave spreads from California to Montana.

About 200 million people are expected to experience temperatures above 90-degrees over the next few days, and some 40 million will have to suffer in heat above 100-degrees.

Highs could reach up to 30 degrees above average, NBC reported, and nearly 200 daily record highs are possible by the end of the week. Those could include monthly and all-time record highs, especially in parts of the desert southwest, where temperatures could get up to 127-degrees. 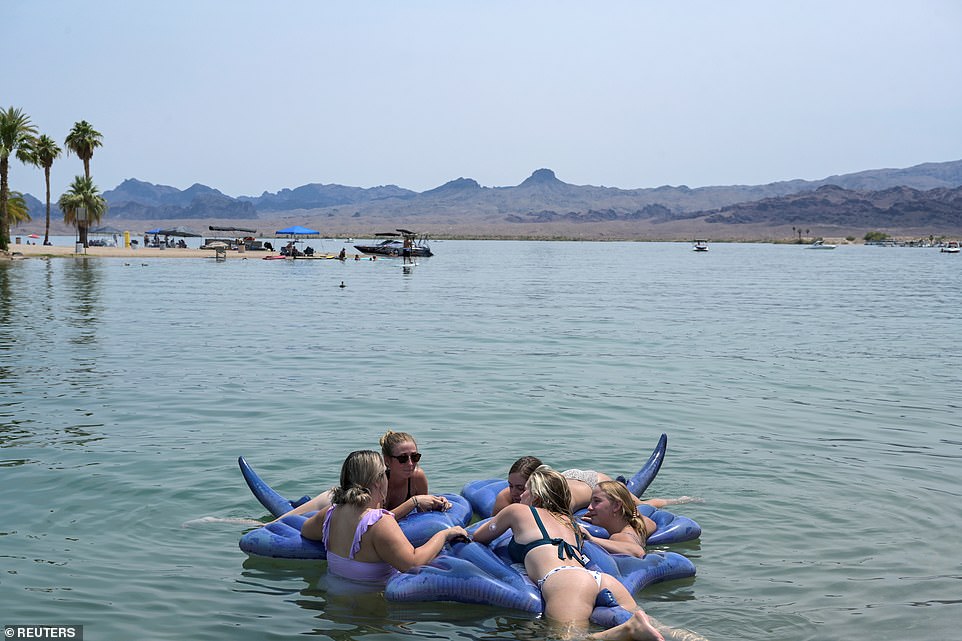 Lake Havasu, Arizona: A group of women met up in the middle of the lake to chat as they escaped the heat 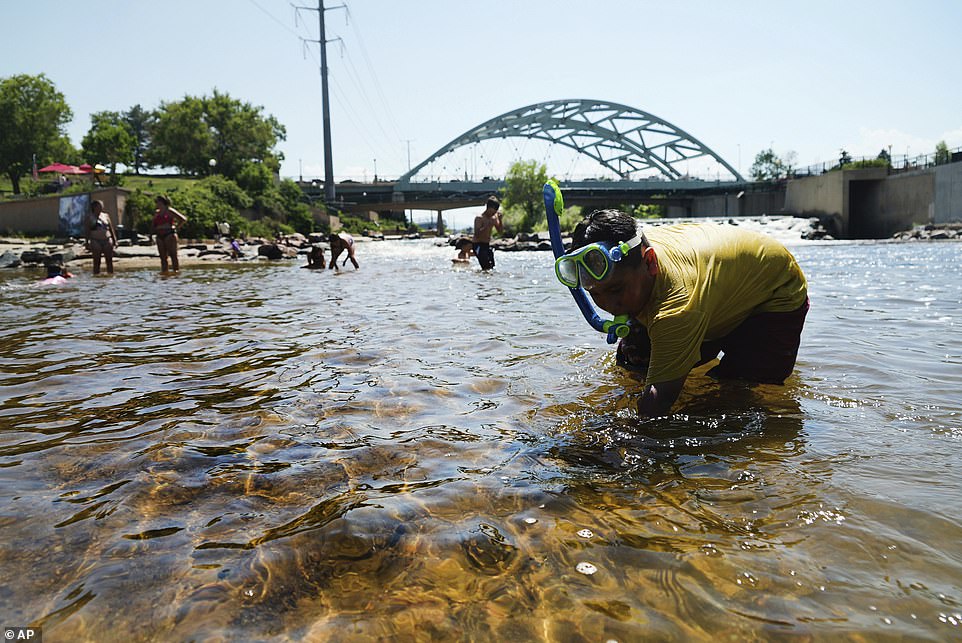 Denver, Colorado: A child cooled off in the water at the confluence of the South Platte River and Cherry Creek on Monday, as temperatures reached 101-degrees Fahrenheit 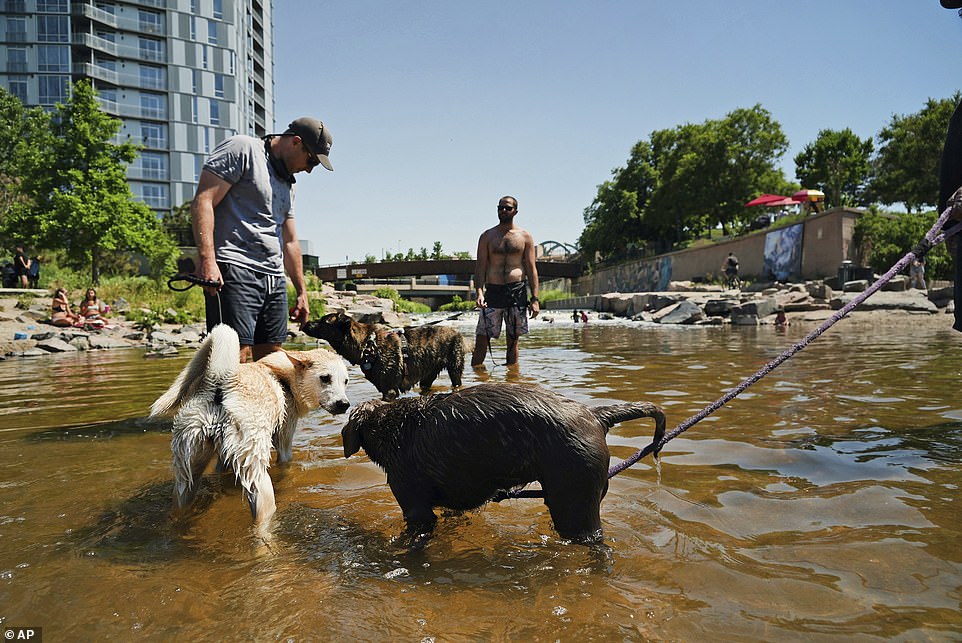 Denver, Colorado: Dogs played in the water, cooling themselves off from the record-high heat on Monday 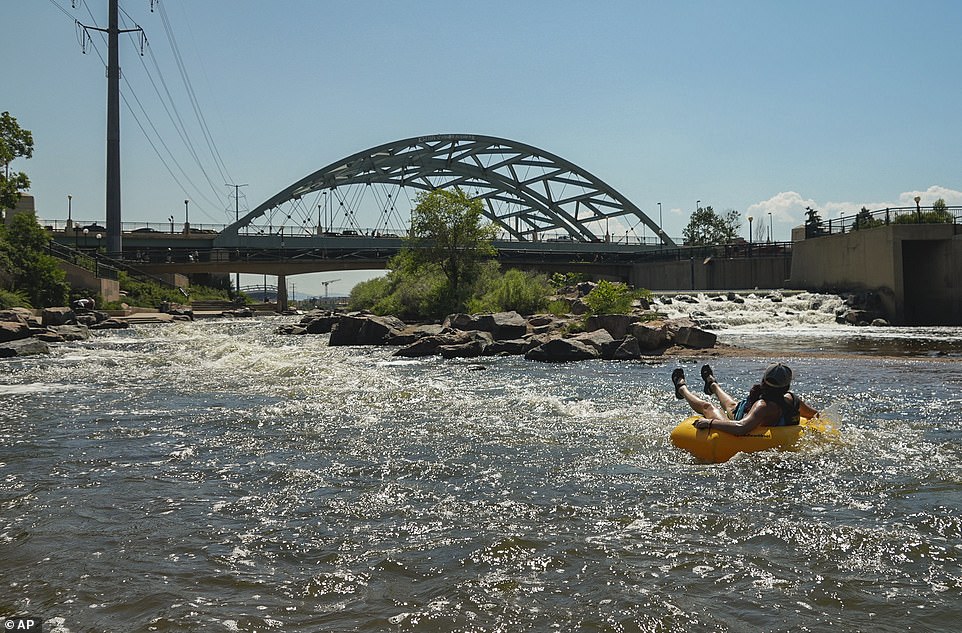 Denver, Colorado: Some people enjoyed water tubing along the South Platte River on Monday as the heat rose to record levels 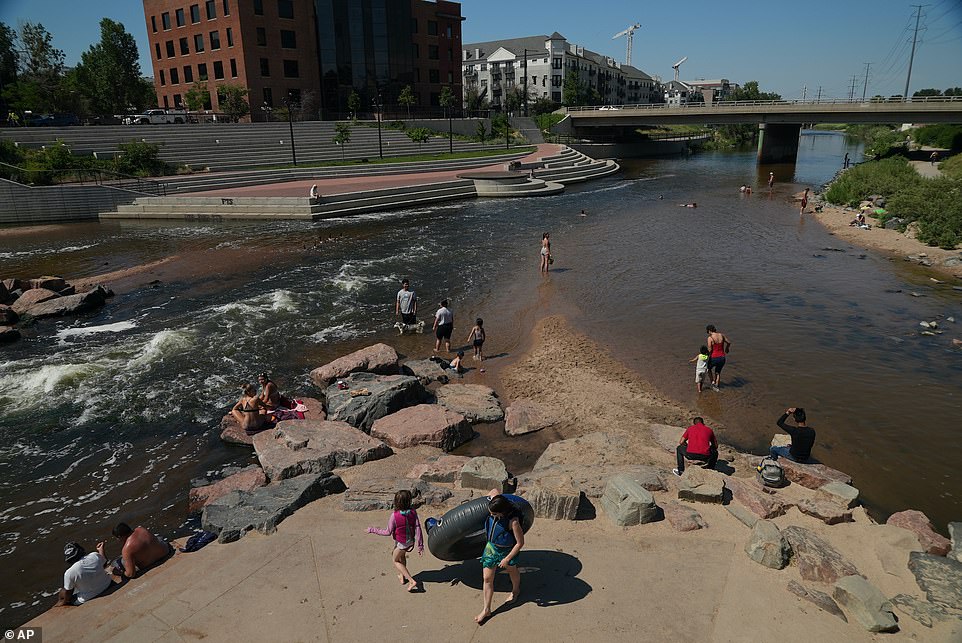 Denver, Colorado: People were seen cooling off in the water at the confluence of the South Platte River and Cherry Creek 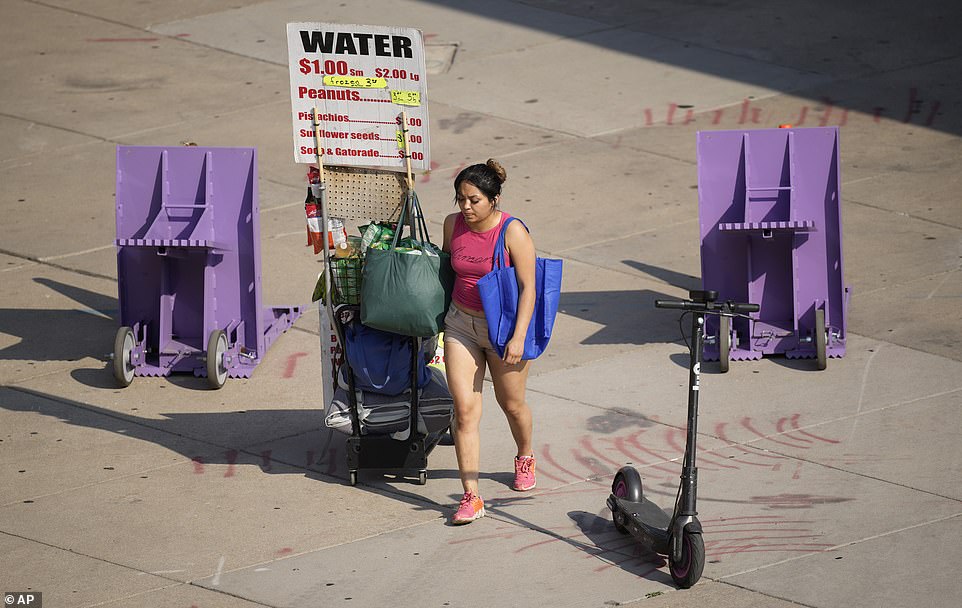 Denver, Colorado: As temperatures reached above the triple digits,  vendor decided to sell water outside Coors Field during the afternoon rush hour on Tuesday

Dozens of daily records had already been set on Monday, NBC reports, as highs soared into the 90s and 100s.

Thousands are facing warnings for wildfires and officials in California and Texas are urging residents to conserve power to prevent rolling blackouts.

Denver, Colorado hit 101-degrees Fahrenheit and Helena, Montana hit 104-degrees. Records in Salt Lake City and Billings, Montana were broken by at least five degrees, and temperatures in the southwest skyrocketed above 110 degrees.

Safford, Arizona saw a record-high of 113-degrees on Monday, while Tucson saw 112-degrees and temperatures in Las Vegas, Nevada soared to 111, according to Praedictix Weather.

And Salt Lake City saw another record-high on Tuesday, at 106-degrees, Jamie McGriff, an anchor at KUTV tweeted. The previous record for June was 105-degrees.

Many senior centers, libraries and community spaces around Los Angeles were acting as cooling stations on Tuesday, the LA Times reported, and stations where people can get water and cool off in the shade opened across the Phoenix metro area at Salvation Army posts, city swimming pools, libraries and community centers. They will continue to operate during the day amid the excessive heat warning. 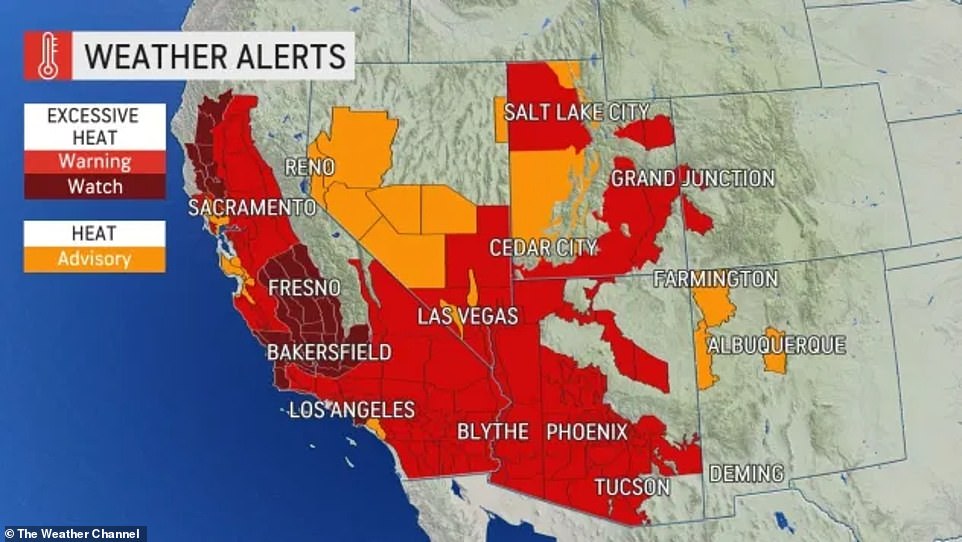 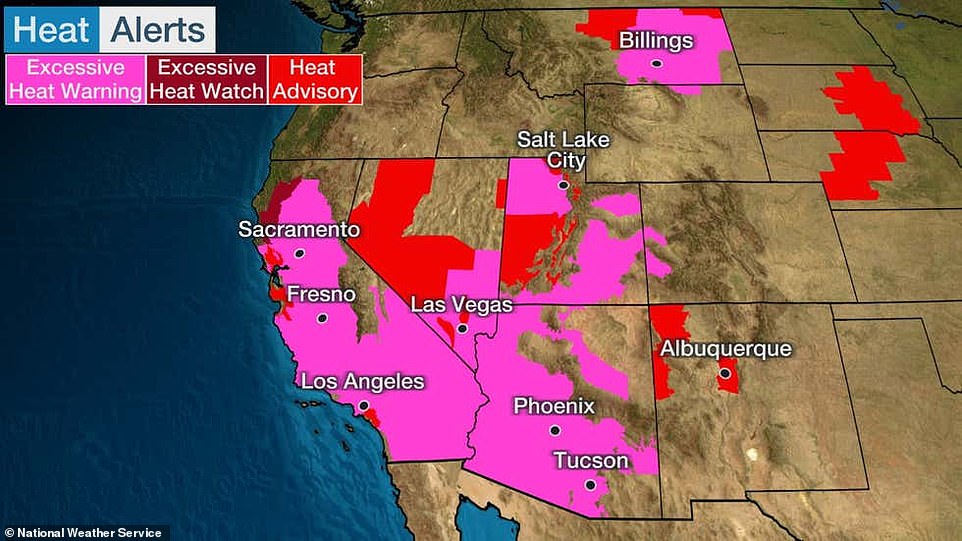 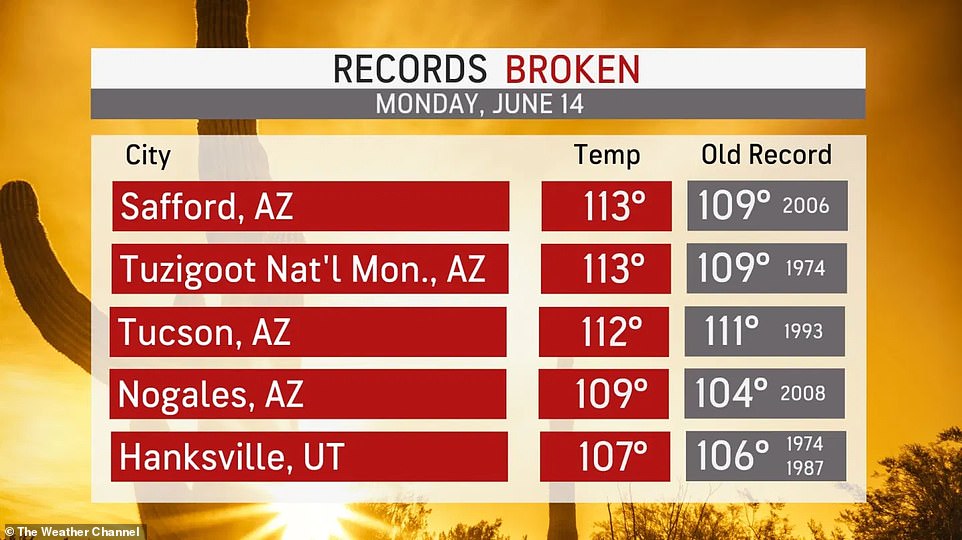 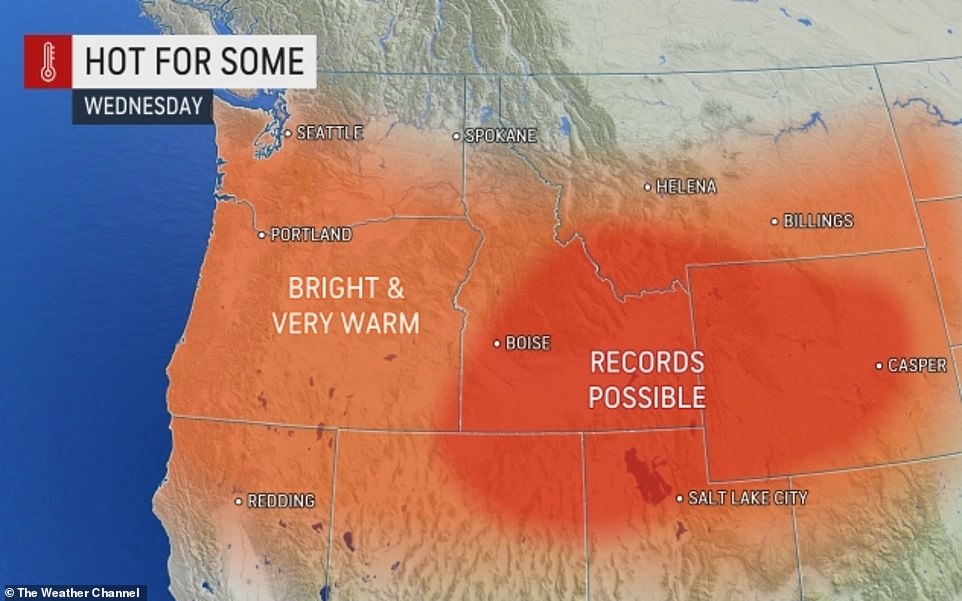 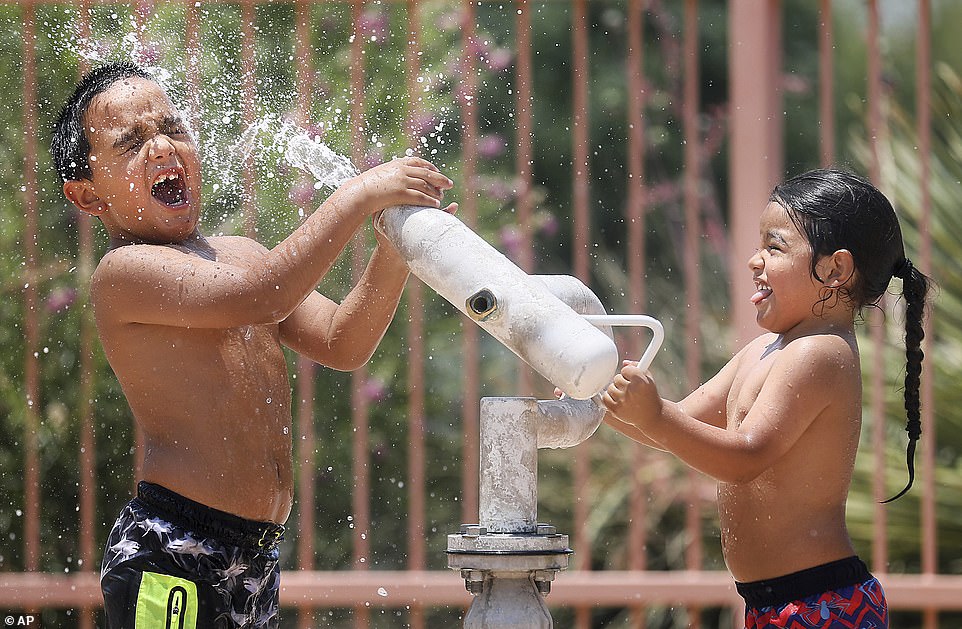 Tucson, Arizona: Angel Roman, 4, right, suffered from a direct hit by his brother, Junior, 6, at a splash pad at Catalina Park on Monday, where temperatures reached 112-degrees 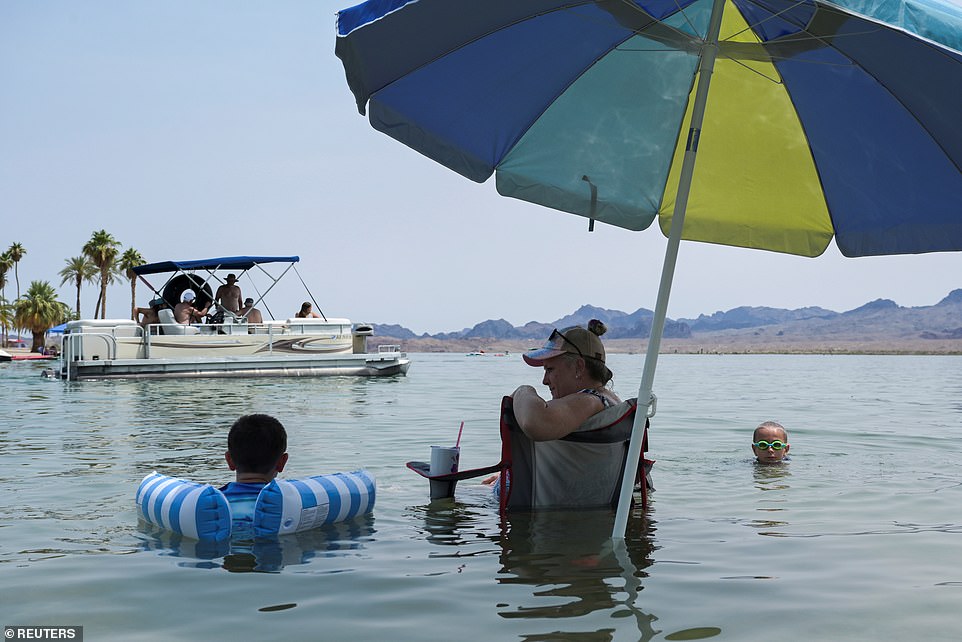 Lake Havasu, Arizona: Mary Ann Brown, center, brought her beach chair into the lake to cool off with her grandchildren 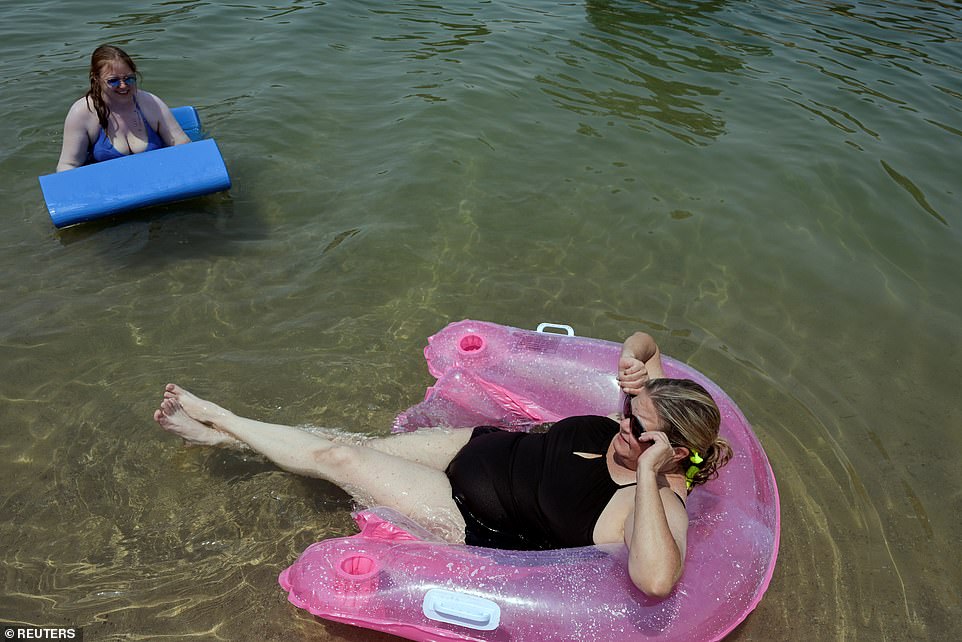 Lake Havasu, Arizona: Sarah Bulat and Tricia Watts relaxed in the water in their floaties on Tuesday 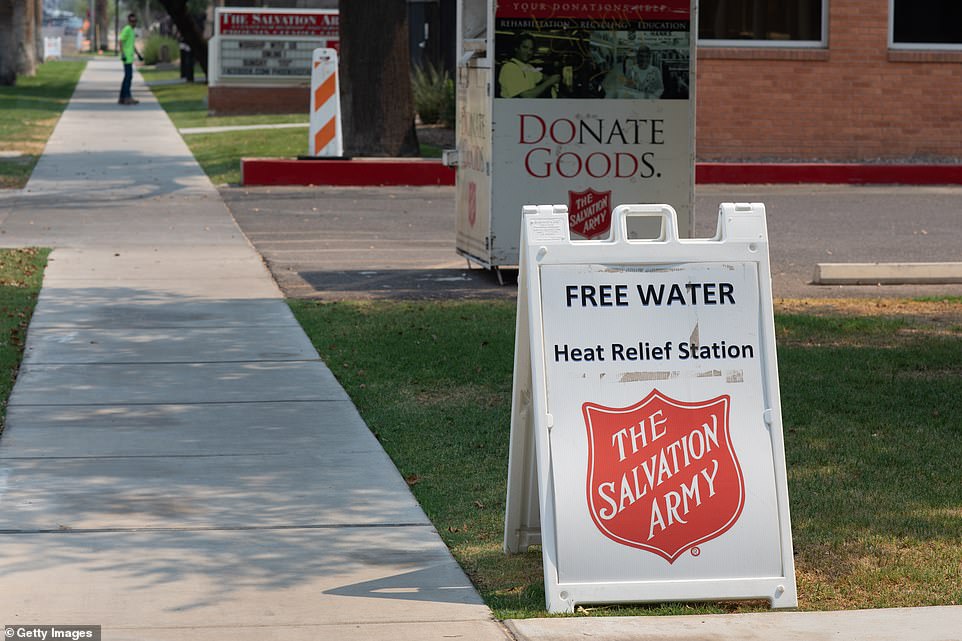 Phoenix, Arizona: A heat-relief station was set up at the Salvation Army Phoenix Citadel on Tuesday with free water

Percha said the high pressure dome combined with the land’s lack of moisture caused by extreme drought has combined to create blistering heat expected throughout the entire week.

‘What is unusual is the strength and the duration’ of the high pressure system, he said.

By Tuesday, #HEATWAVE was trending on Twitter, with people throughout the country sharing their thoughts on the excessive heat, but, the National Weather Service warns, it’s only supposed to get hotter and could be the hottest spell ever for people in Las Vegas. 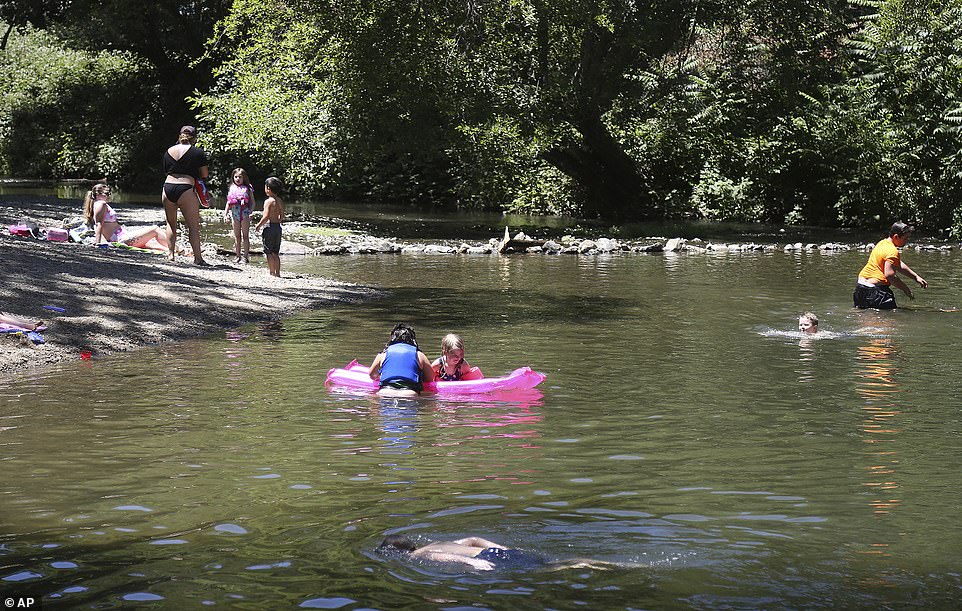 Penn Valley, California: Some parents took their kids to Squirrel Creek on Tuesday afternoon in an attempt to beat the heat 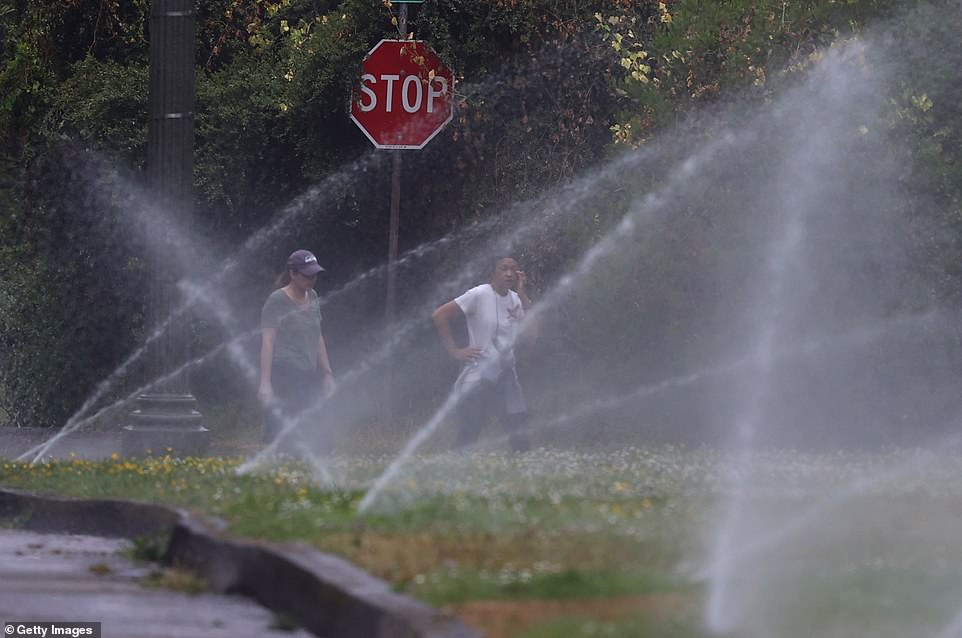 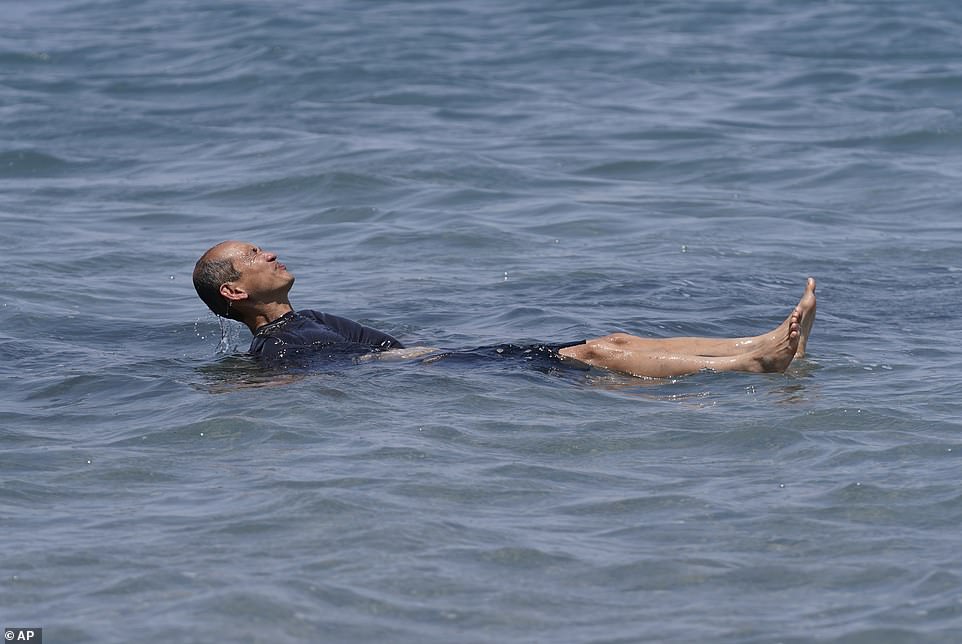 Salt Lake City, Utah: A man floated in the Great Salt Lake on Tuesday as the city broke its record high temperatures 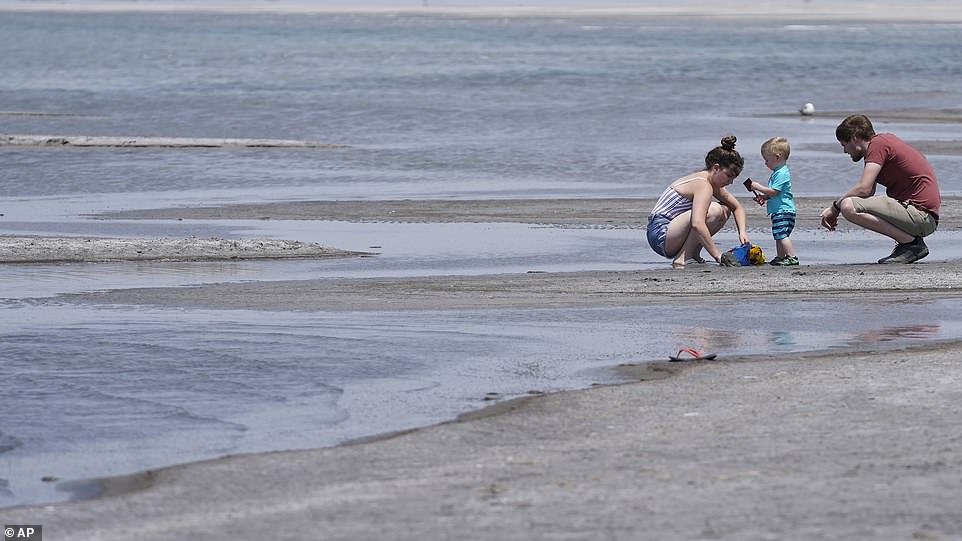 Salt Lake City, Utah: William and Kayla Darling played with their son, King, along the Great Salt Lake on Tuesday

And with the combination of dry conditions and gusty winds, the National Weather Service said, much of the west could see some fires over the next few days, but some have already broken out.

Over the weekend, a fire started in the Santa Rosa Mountains and had destroyed two homes burned 400 acres of land by Monday morning, according to KTLA.

Then on Monday, a fire engulfed an area near Yellowstone National Park in Montana and grew quickly overnight.  By Tuesday morning it had encompassed more than 3 square miles of the area, according to the Custer Gallatin National Forest. Some people in the rural area were told to flee their homes, while other fires in the state also forced some evacuations.

Critical Risks of fire were also in place across Nevada and Colorado on Tuesday.

‘This is happening in the middle of June. This is unprecedented,’ said Bill Murrell, a weather service meteorologist in Riverton, Wyoming. 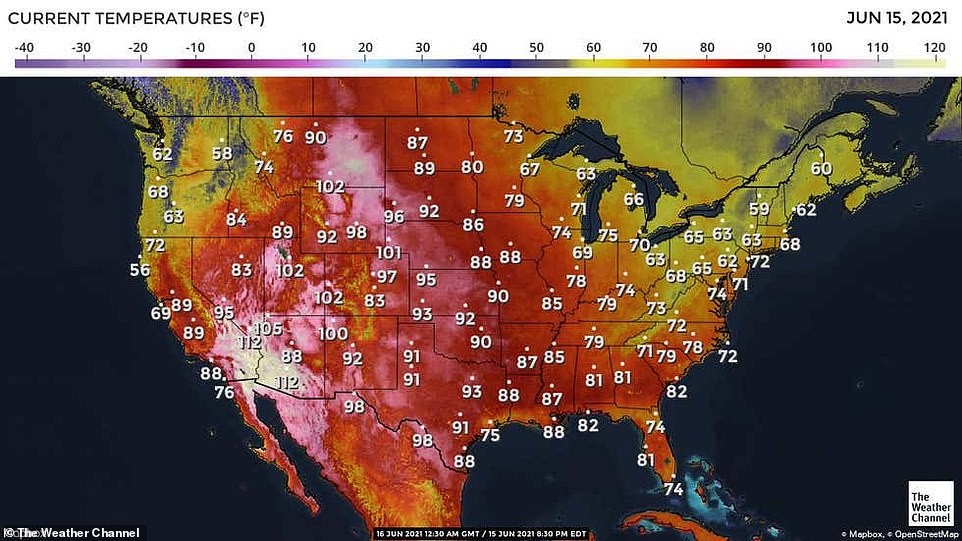 The record-high temperatures were expected to continue through the night and would not be much better in mountainous regions, according to the National Weather Service 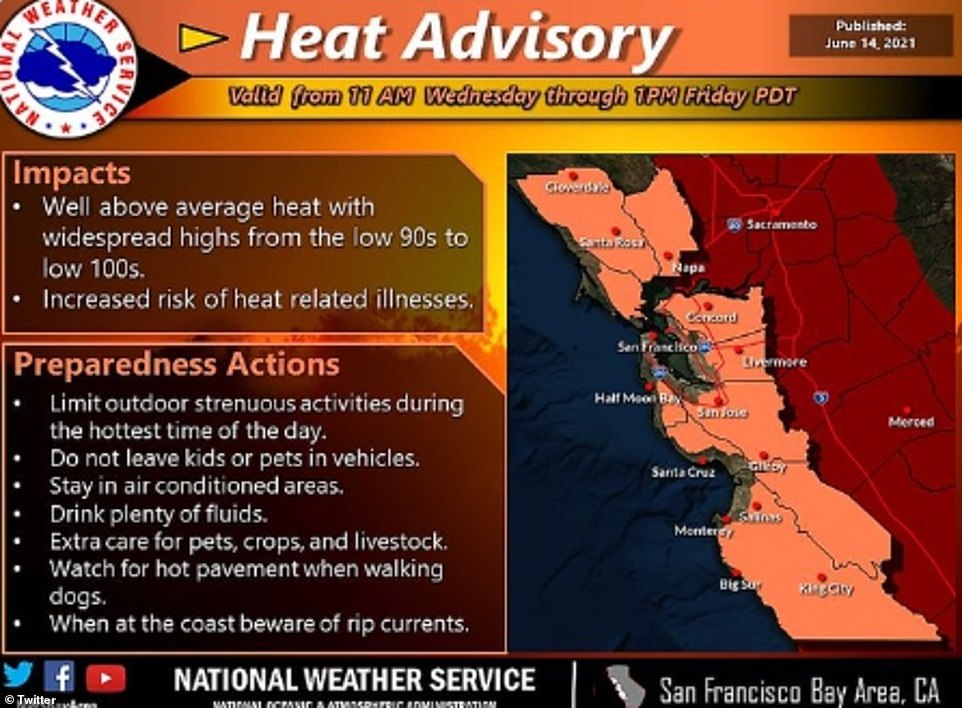 The situation has become so dire, NBC said, that power grid operators in California and Texas are urging residents to conserve power to avoid rolling blackouts.

But the National Weather Service is also urging people to stay inside ‘and seek air-conditioned buildings.’

Additionally, it said, people should try to stay hydrated and take frequent breaks if participating in outdoor activities.

People with dogs should also check the temperature of the asphalt before taking them for a walk, and the Fairfield, California Police Department warned people not to keep their children and pets in the car without the air-conditioning on for long periods of time.

The heat wave struck at the start of the Southwest’s annual monsoon season, which runs through September 30 and is supposed to be the region’s rainy period, often contributing as much as 60 percent of annual precipitation.

But last year´s monsoon was the driest in recorded history, with an average of just 1.5 inches of rain in Arizona.

Percha, the forecaster in Phoenix, said June is Arizona’s driest month and that the state doesn’t usually start seeing some rain until early July. 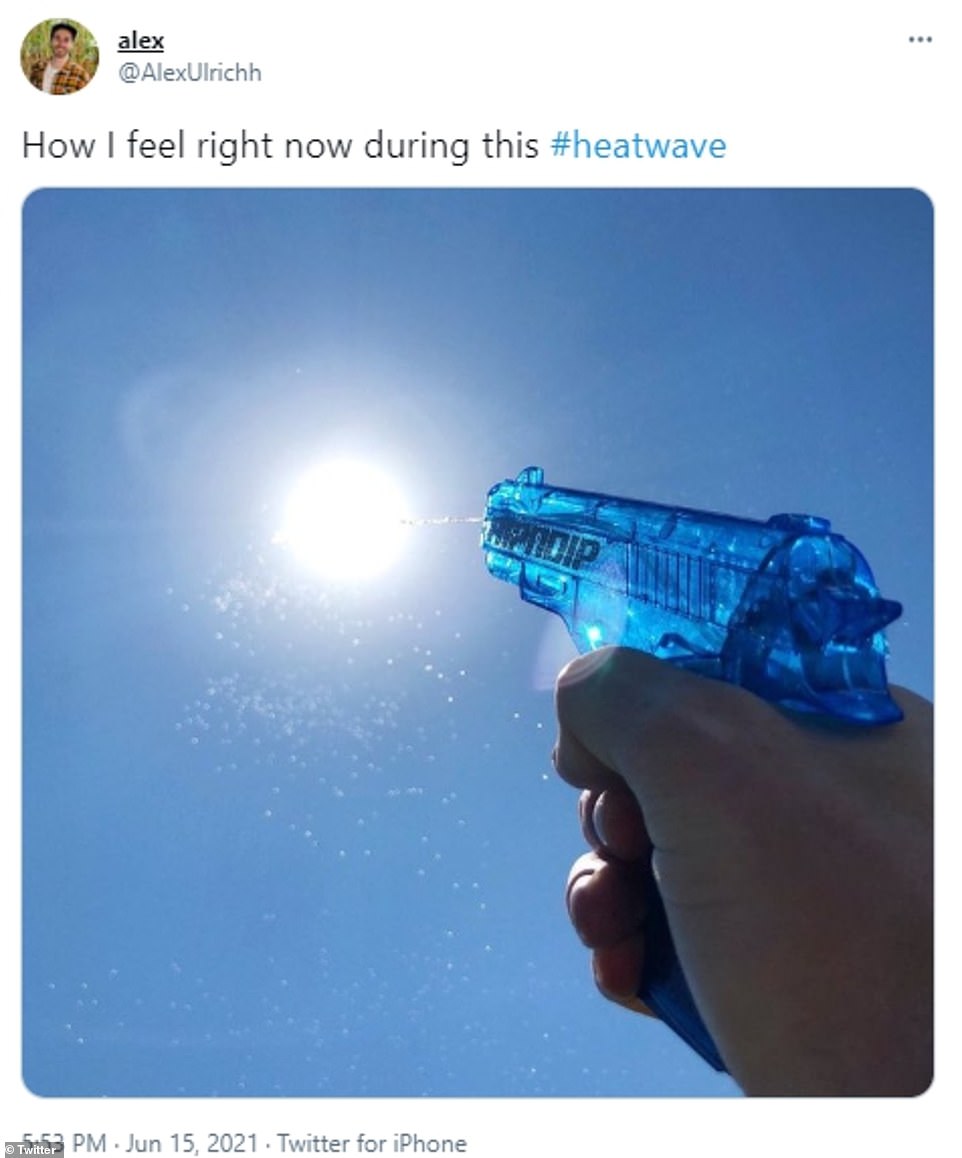 As the heatwave spread, some like Alex Ulrich took to Twitter to express their feelings about the heat

Pink splashes out $13.7M as she pays over asking price for Malibu villa once owned by Barry Manilow 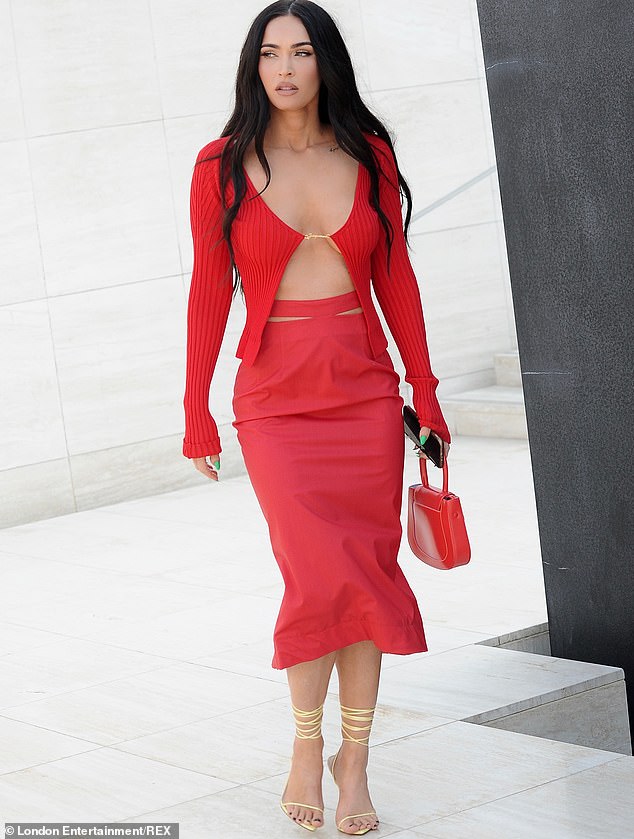 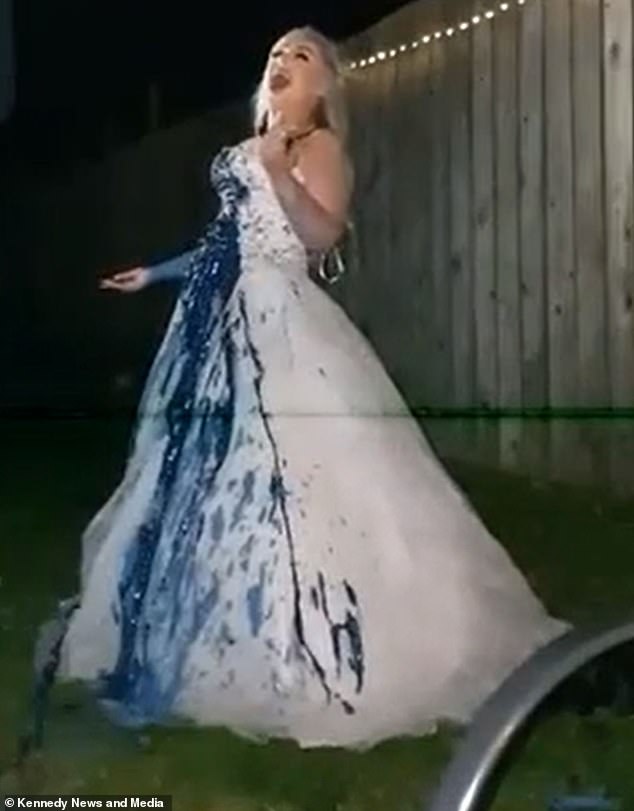 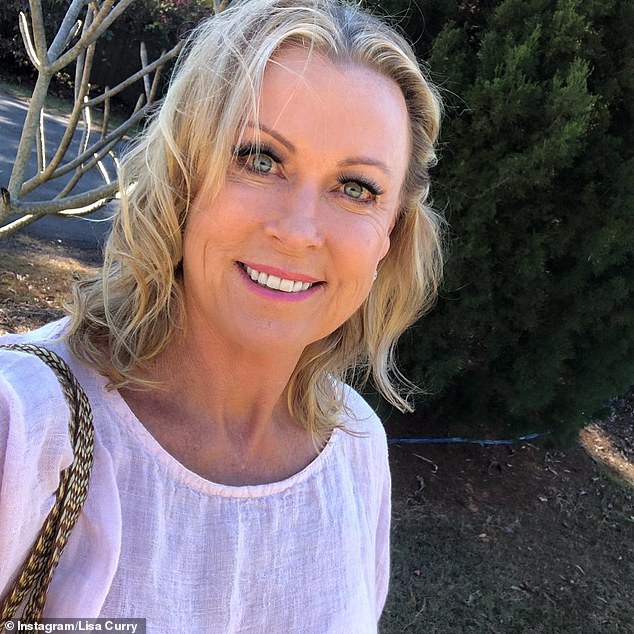 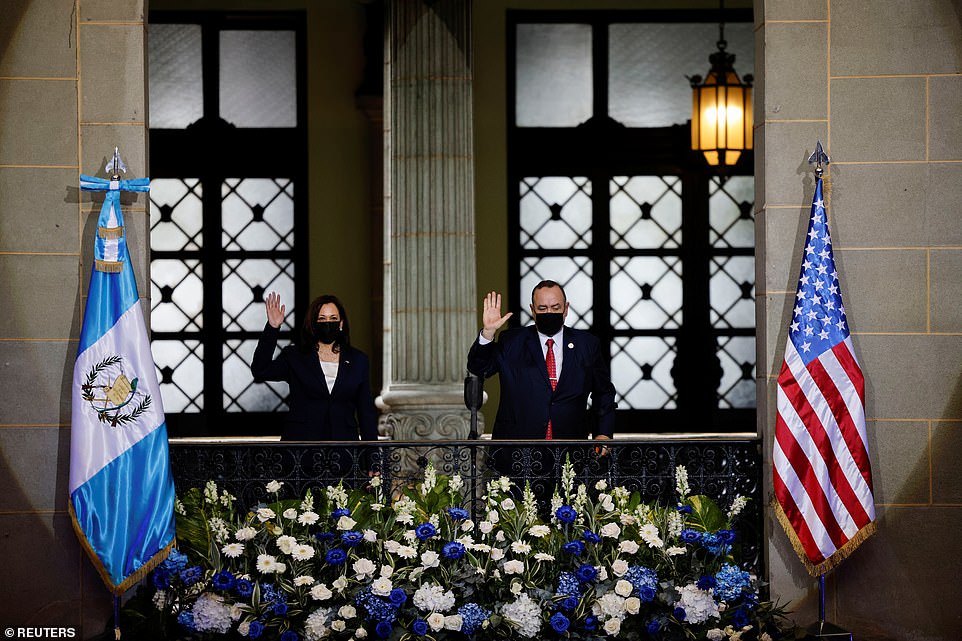 ‘Do not come!’ Kamala warns migrants against coming because she ‘believes’ they’ll be turned back