By Rachael Bunyan For Mailonline and Ariel Zilber For Dailymail.com


Before he gained fame photographing New York City’s legendary punk rock scene, David Godlis trained his camera on a secluded Miami Beach enclave of elderly immigrants who came to the United States from Eastern Europe and built a life for themselves in a ‘Jewish Disneyland’ that has since faded from memory.

Godlis was there to capture photos of retirees playing cards under the sunshine and palm trees or getting a tan on lounges and lawn chairs as they stared out beyond the horizon of the Atlantic Ocean.

His new book, a 159-page project called Godlis: Miami, chronicles his trip to South Florida as a 22-year-old in 1974. He spent ten days in Miami Beach visiting his grandparents – Russian emigres who found a new life in America.

During his 10-day trip, he shot 50 rolls of black-and-white film. In hindsight, he discovered that it was where he honed his craft and perfected the ‘street photography’ style that he became known for while capturing images of the Bowery, CBGB, and the hectic nightlife of Greenwich Village and Lower Manhattan in the mid-1970s.

Godlis found a thriving, bustling environment that seems like a distant memory – one where a carton of cigarettes cost just $3.99 and arrivals from the old country saw Yiddish-language vaudeville shows at one of the historic art deco theatres.

At the time, Godlis had no clue that he was witness to the end of an era. The second-generation immigrants would abandon Yiddish in favor of their native tongue, English.

His grandparents, like other immigrants in the community, were snowbirds who retired to South Florida after back-breaking work in the hustle-and-bustle atmosphere of New York City.

A far cry from New York’s harsh winters, these retirees were savoring the respite from the frost of the Northeast. 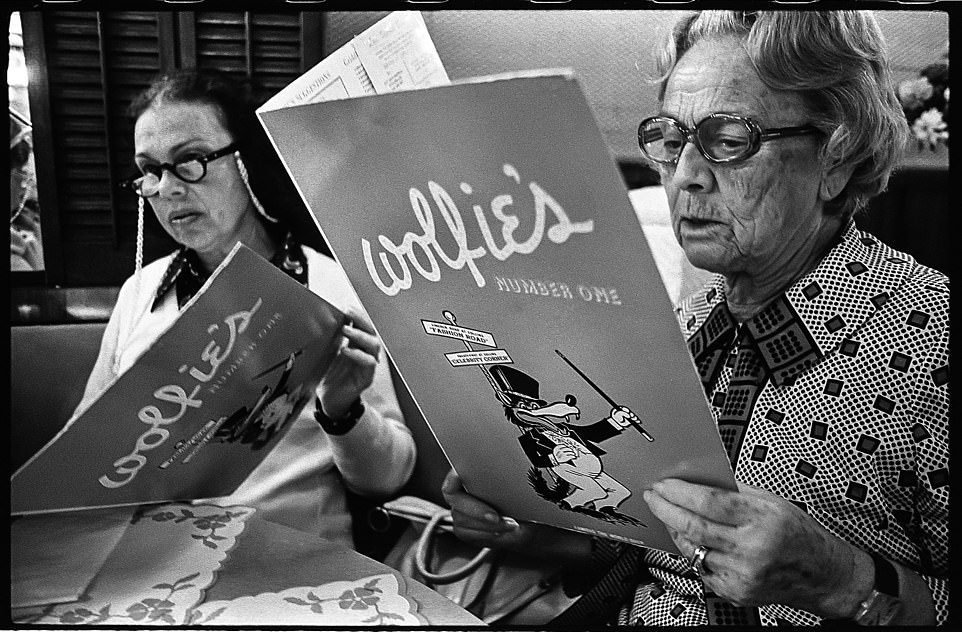 This black-and-white photograph shows two women ordering at the diner Wolfie’s on Collins Avenue. During his 10-day trip to South Florida, he shot 50 rolls of black-and-white film. In hindsight, he discovered that it was where he honed his craft and perfected the ‘street photography’ style that he became known for 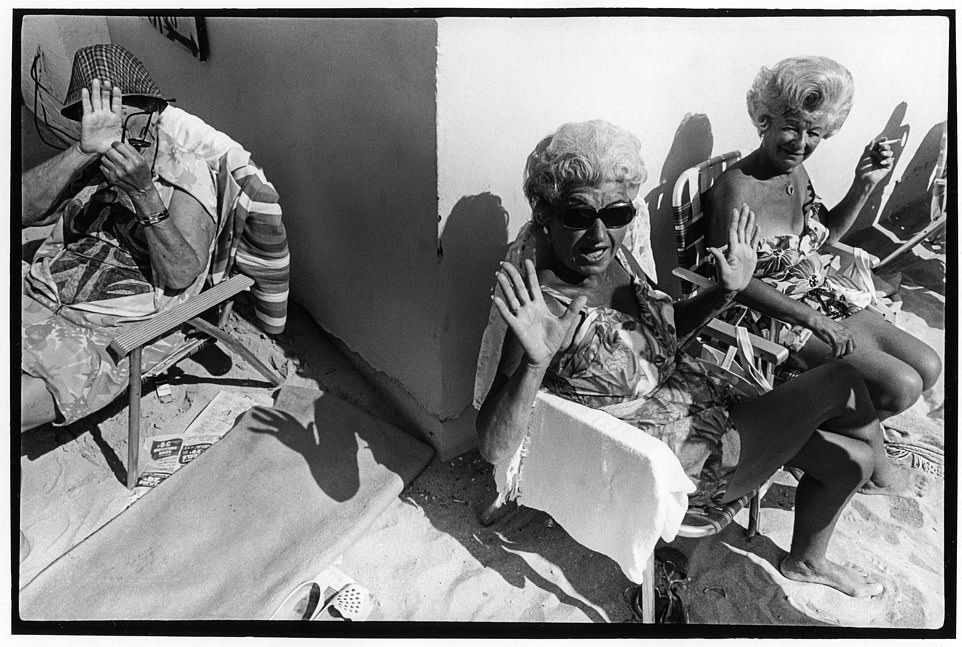 Two ladies and a gentleman are pictured enjoying the sun and tanning in Lummus Park. Godlis visited an enclave of emigres from Eastern Europe, including his own grandparents who came to the United States from Russia 20 years earlier 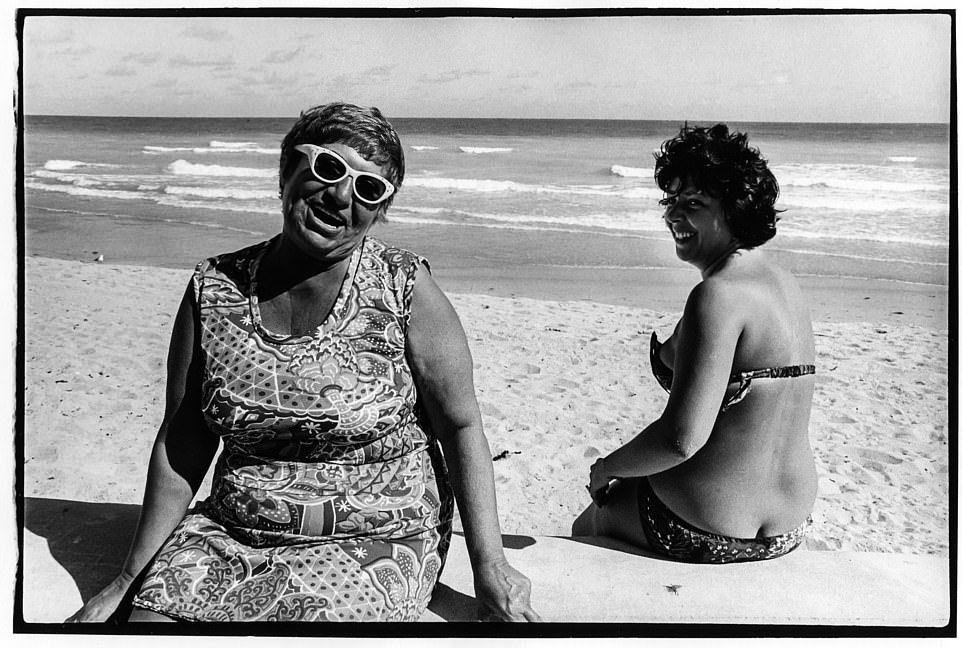 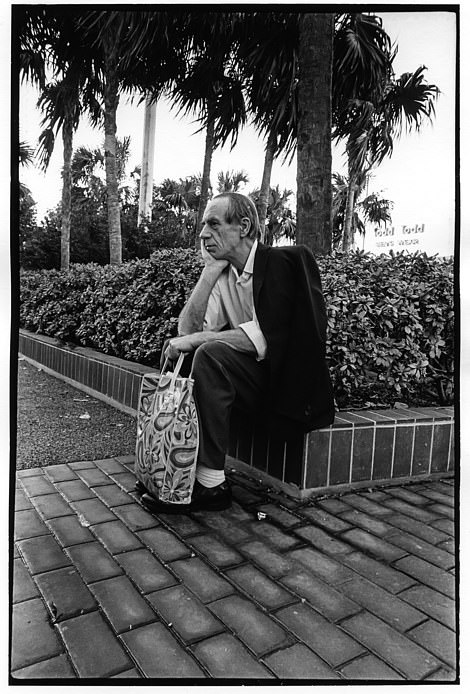 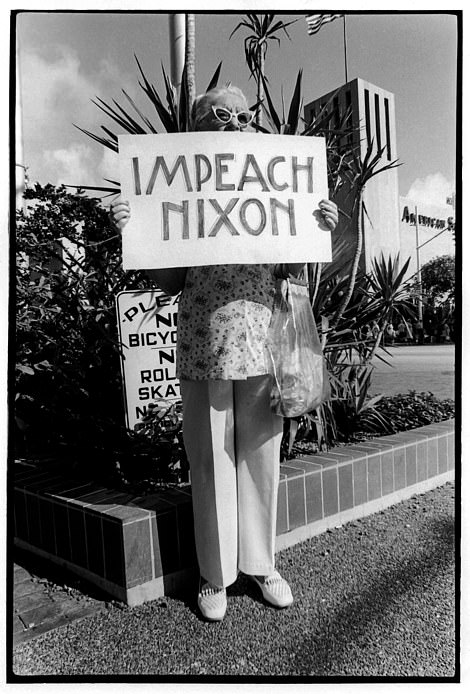 Godlis pictured a man waiting by the beach with a shopping bag (left). The image on the right shows a pensioner holding up an ‘Impeach Nixon’ poster at Lincoln Road Mall 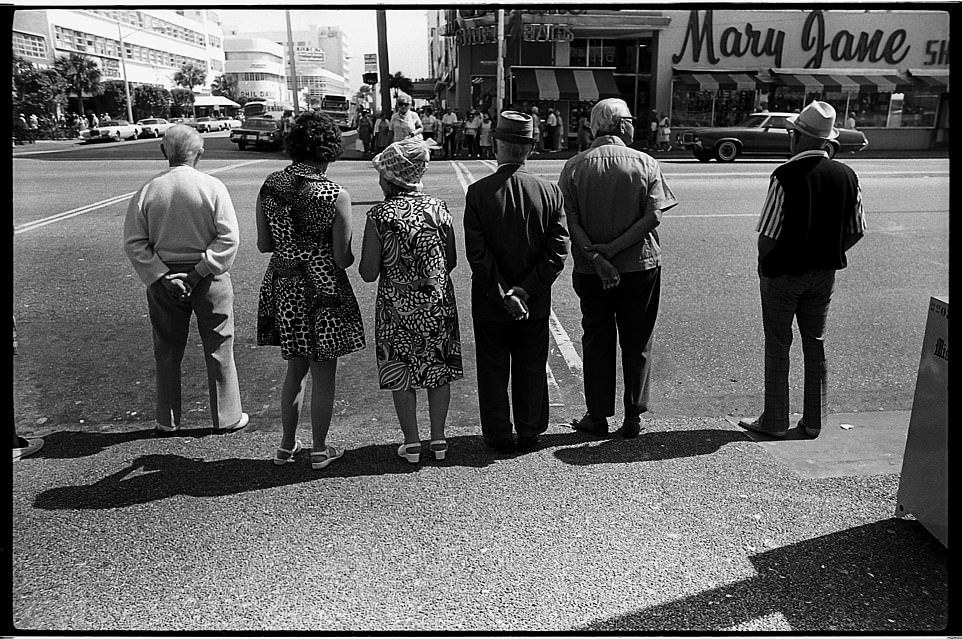 A group of pensioners line up to cross the road by Miami Beach, a bustling area that included theatres, kosher bakeries, restaurants, and diners 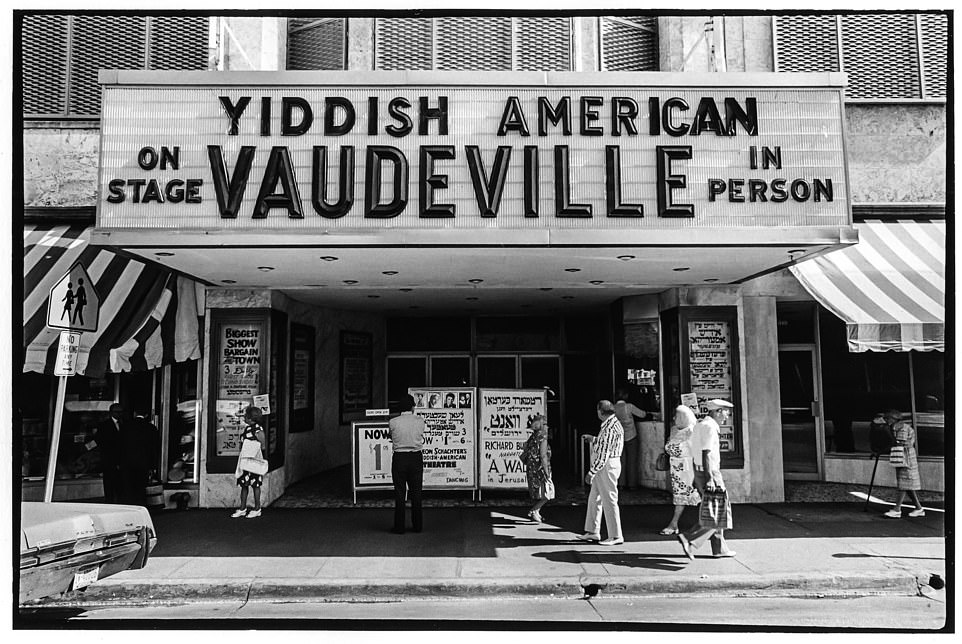 Pensioners stand outside the Cinema Theatre, the oldest and largest art deco theatres on Miami beach. This theatre production featured vaudeville which became one of the most popular forms of entertainment both in Western Europe and America. 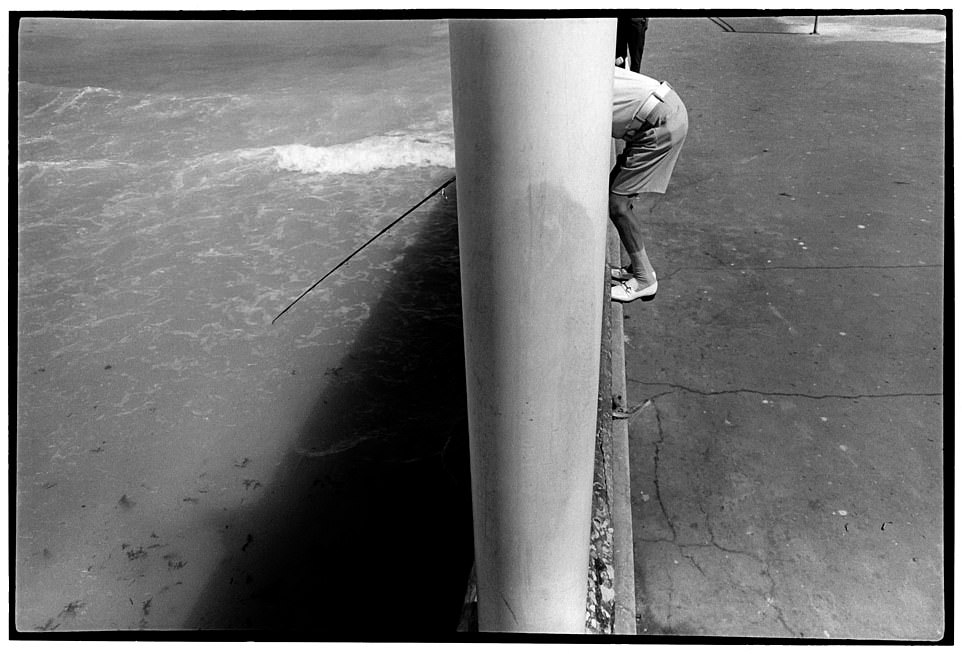 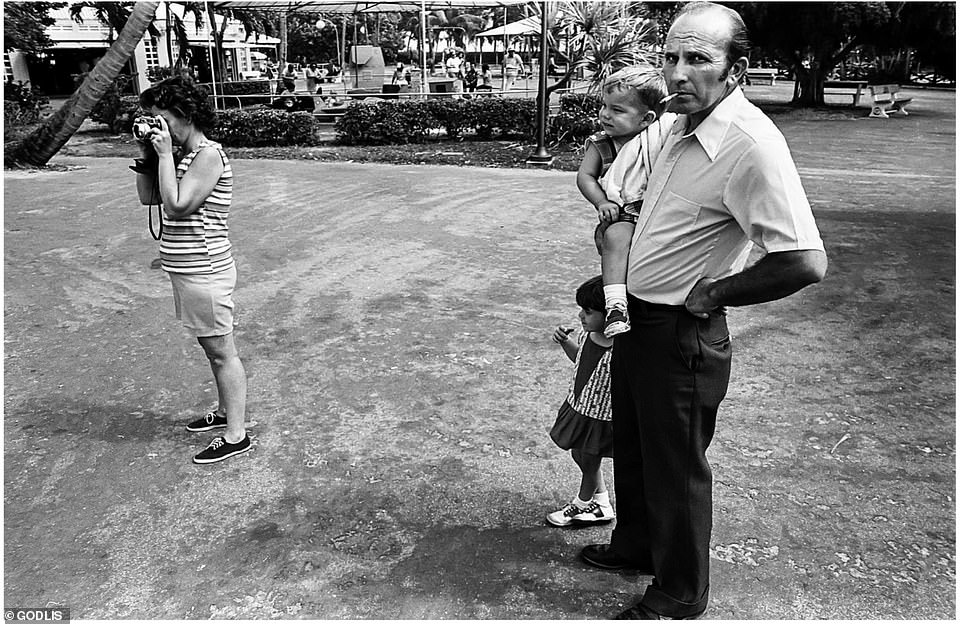 A man stands with a hand on his hip and a lit cigarette in his mouth as he holds a little boy. Meanwhile, a woman is seen taking a picture on her camera as a girl watches on 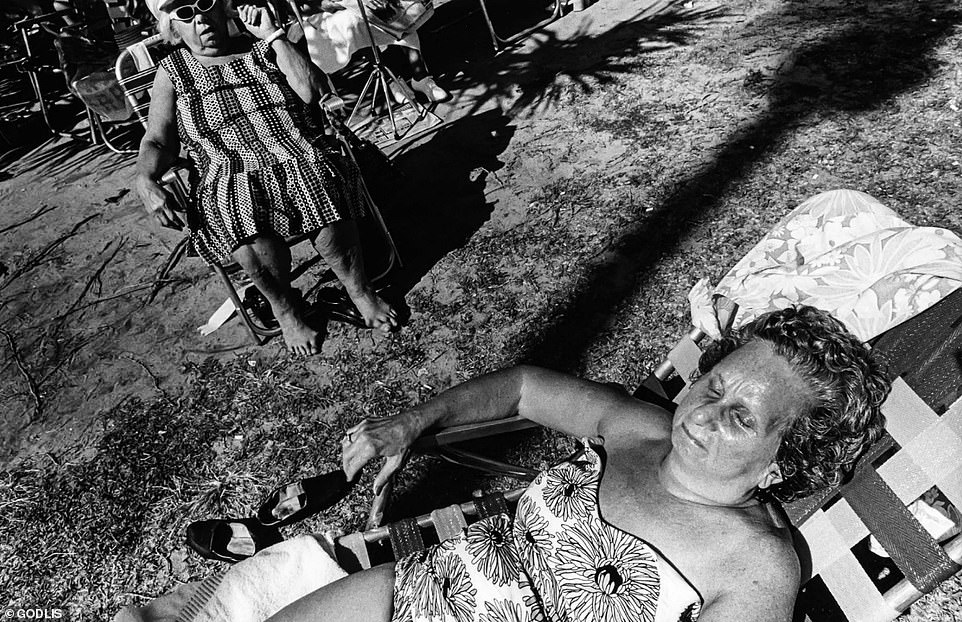 Two women are pictured enjoying the sun. One is laying back with her eyes shut on a sun lounger, wearing what appears to be a swimming costume, whilst the other is wearing a below-the-knee dress and white-framed sunglasses 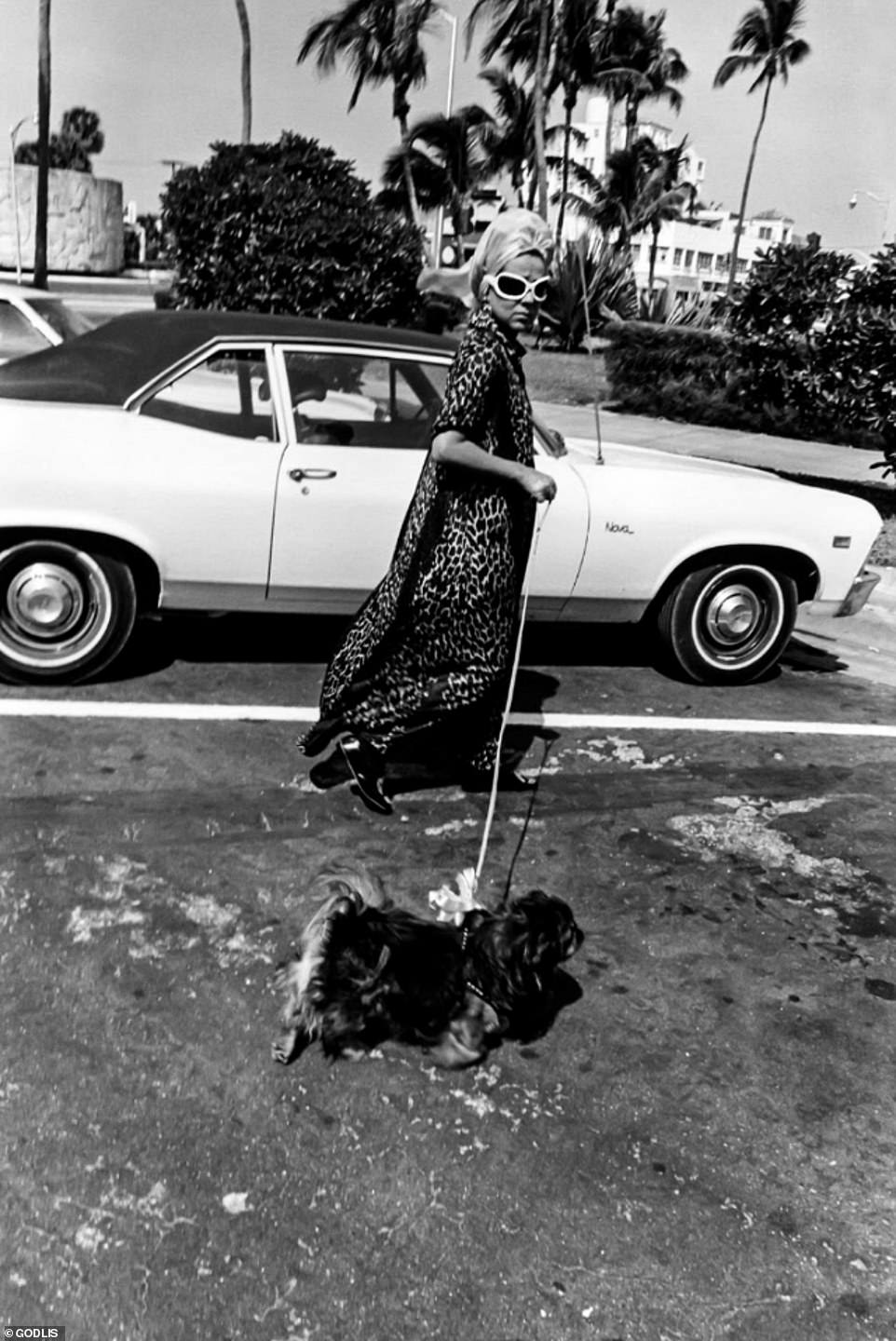 A woman is pictured sanding next to a Chevrolet Chevy II Nova convertible whilst walking her dog. She is pictured wearing a leopard print ensemble with large white sunglasses 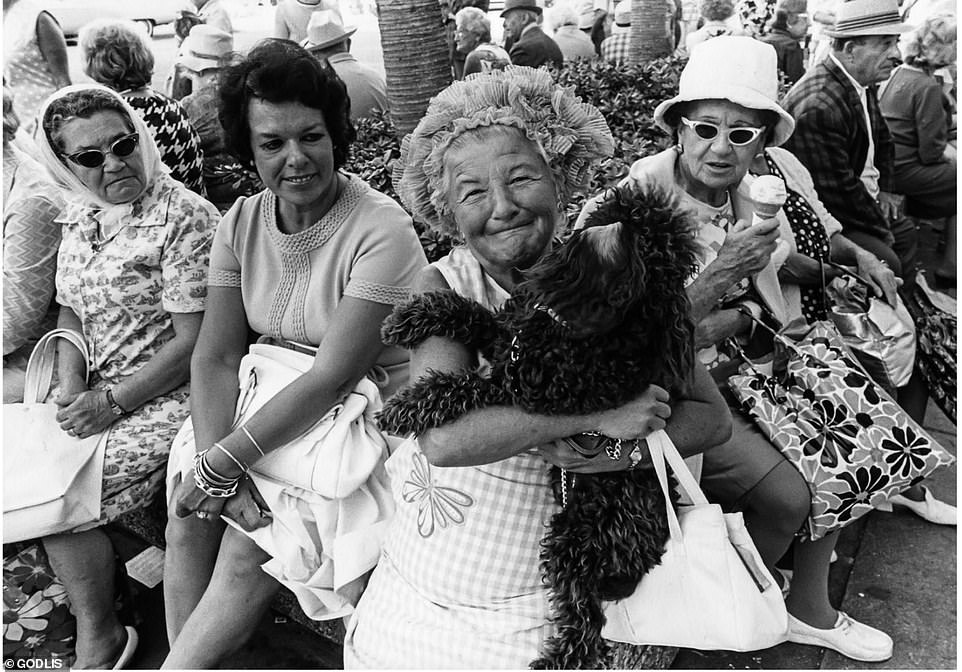 A group of women pose in front of the camera, with one holding her dog. The ladies are pictures sitting in the sun, with one enjoying an ice cream cone (pictured far right) 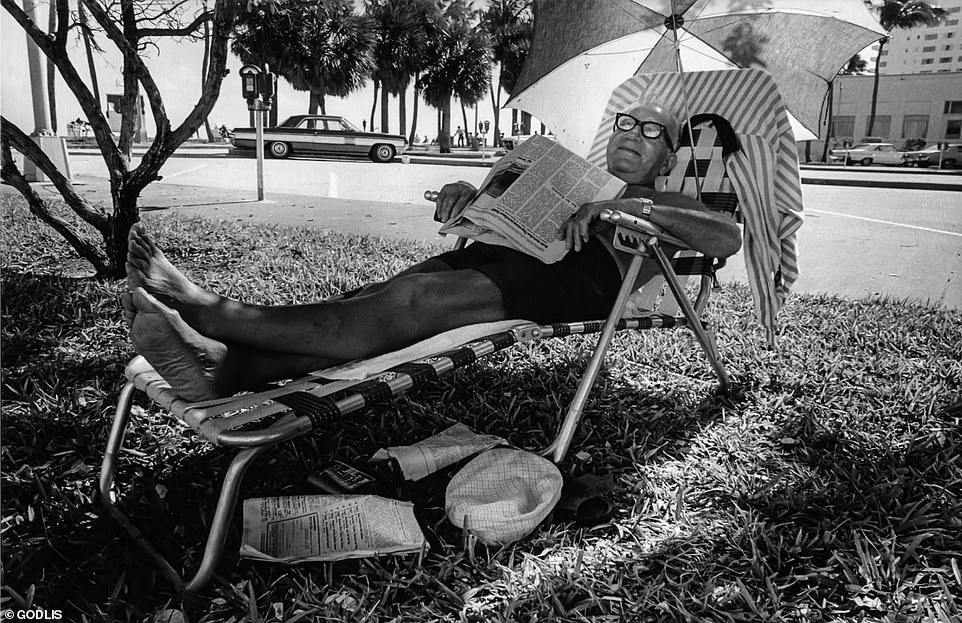 A man lies back on a sun lounger with an attached umbrella to give him some shade. He is pictured holding a newspaper wearing thick black-framed glasses 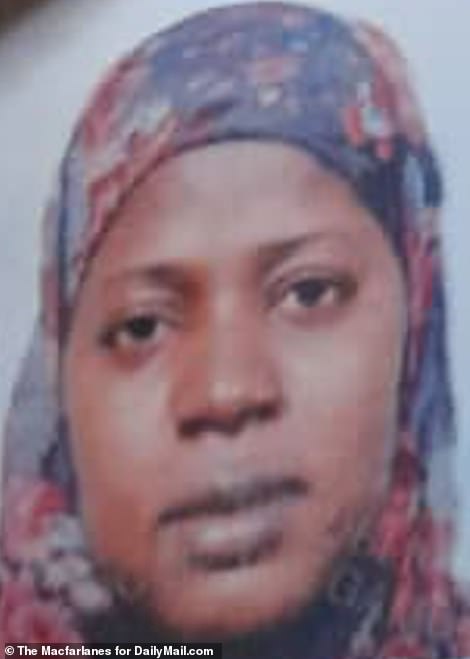 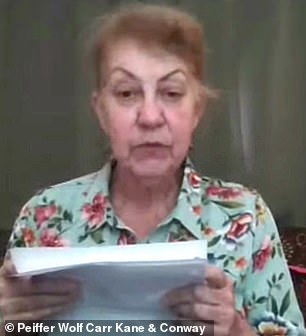 Woman, 75, files lawsuit against gynecologist who ‘secretly used his own sperm to impregnate her’ 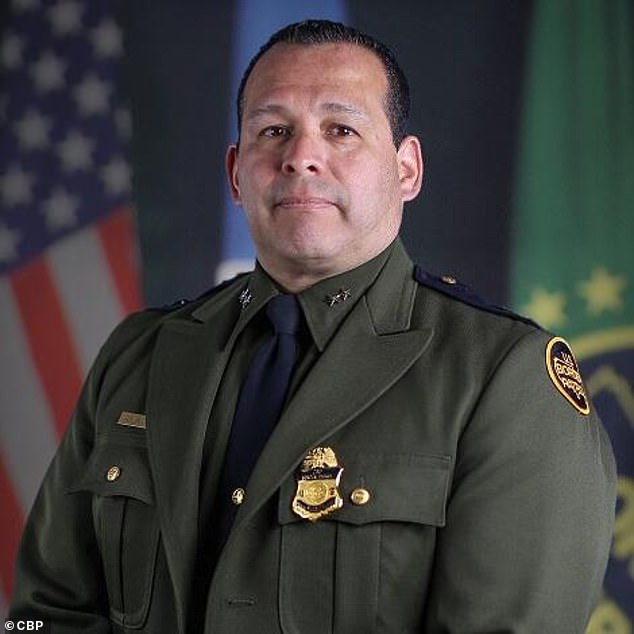 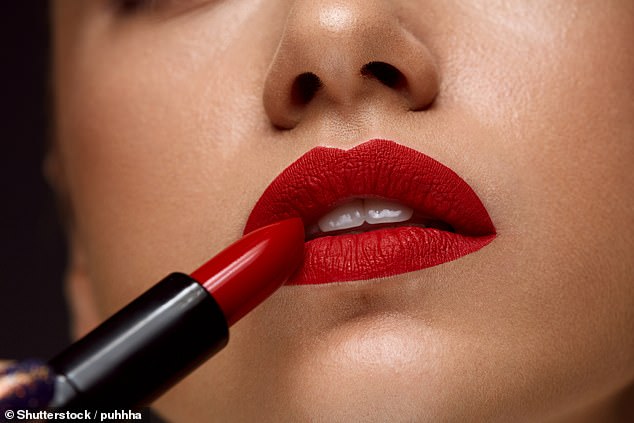 Senator Mitt Romney, 74, tests positive for COVID-19 but is asymptomatic and will work from home
19 mins ago