Ever since we were ejected from Afghanistan on Thursday I have been unable to get the faces of those we left behind out of my mind.

As our convoy for the airport swung out of the iron gates of the hotel compound that had been taken over as the British evacuation base, we drove past thousands of people still begging for a chance to leave.

We passed the sewage canal where hundreds stood knee deep in stinking water, pleading to have their cases heard by the soldiers on the other side of the canal.

A short distance away we were taken through the fortified Abbey Gate entrance to the airport where thousands more people were still waiting to join the queue, hands in the air holding passports and paperwork.

We had been reporting in this small and crowded area constantly. It was just hours after we drove through for the last time that we learned of the two suicide bombs detonated by Isis-K fanatics, one outside the hotel and one at Abbey Gate.

Scores lay dead and it’s agonising to think that among the bloodied and mutilated corpses were perhaps people we had interviewed only hours before. 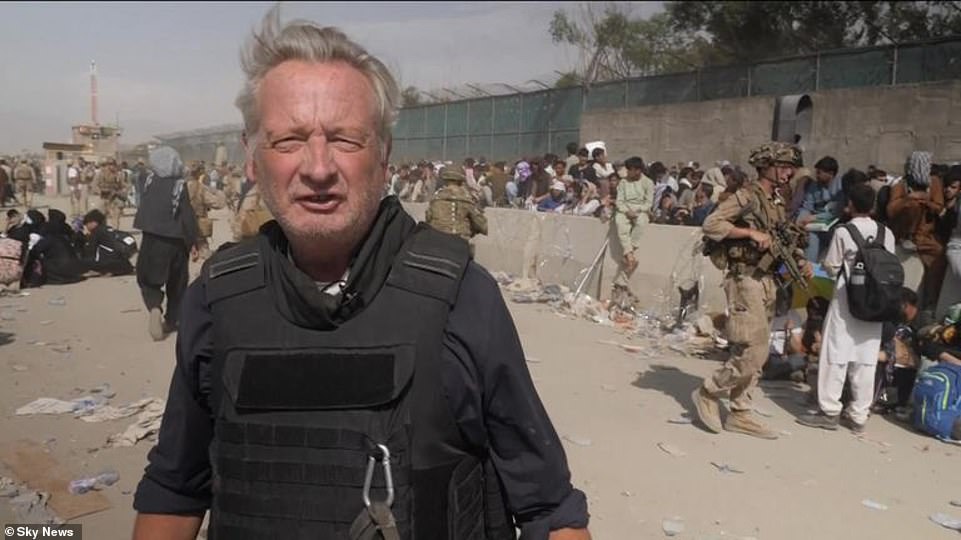 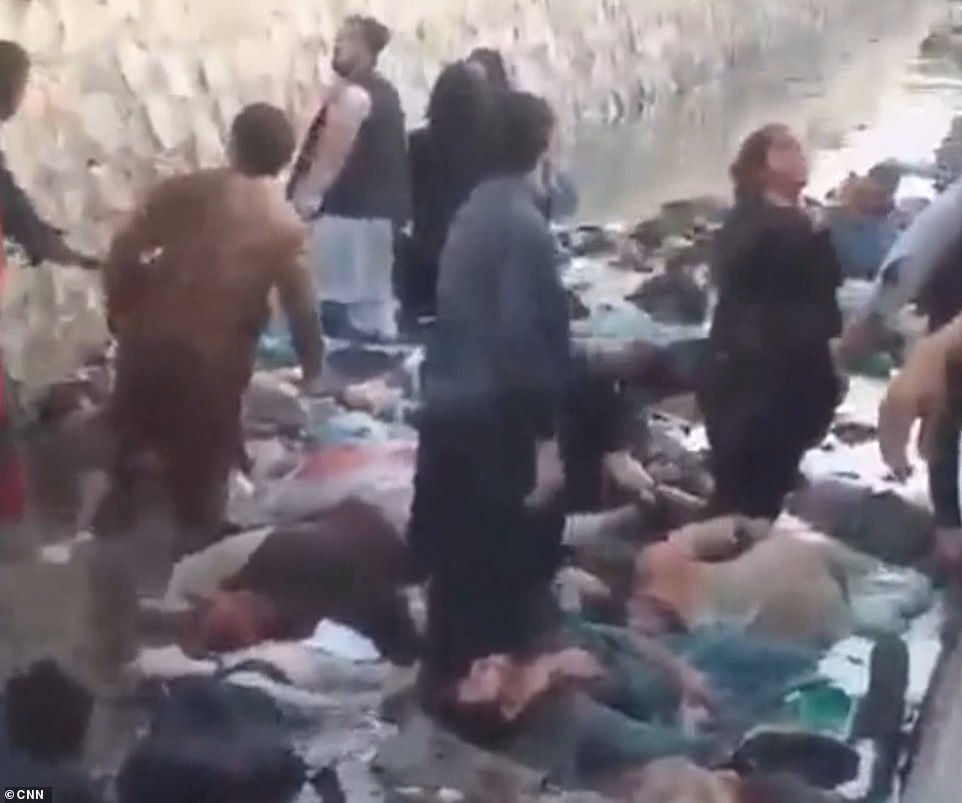 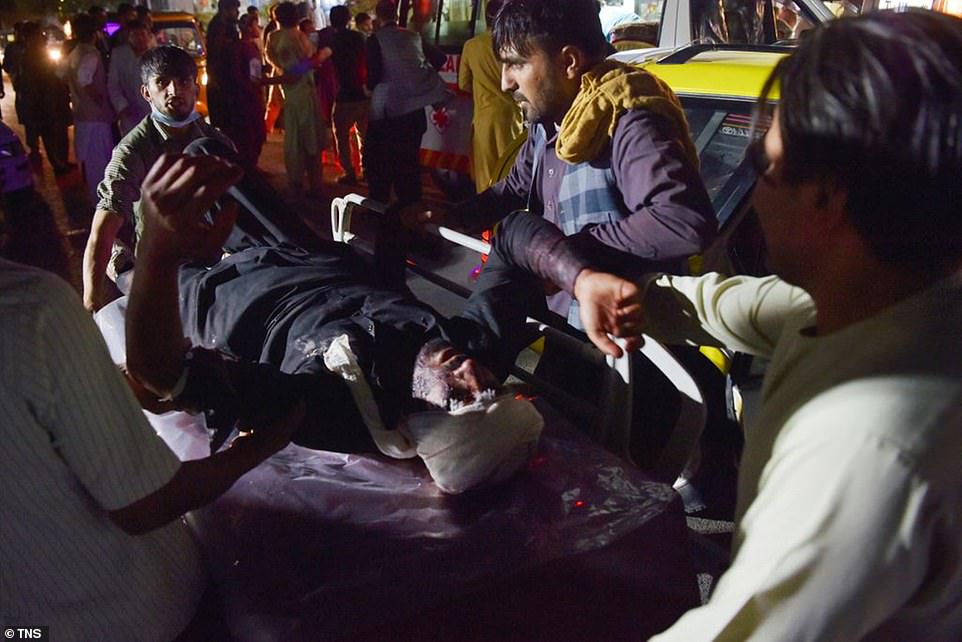 Medical and hospital staff bring an injured man on a stretcher for treatment after two blasts, which killed at least five and wounded a dozen, outside the airport in Kabul yesterday 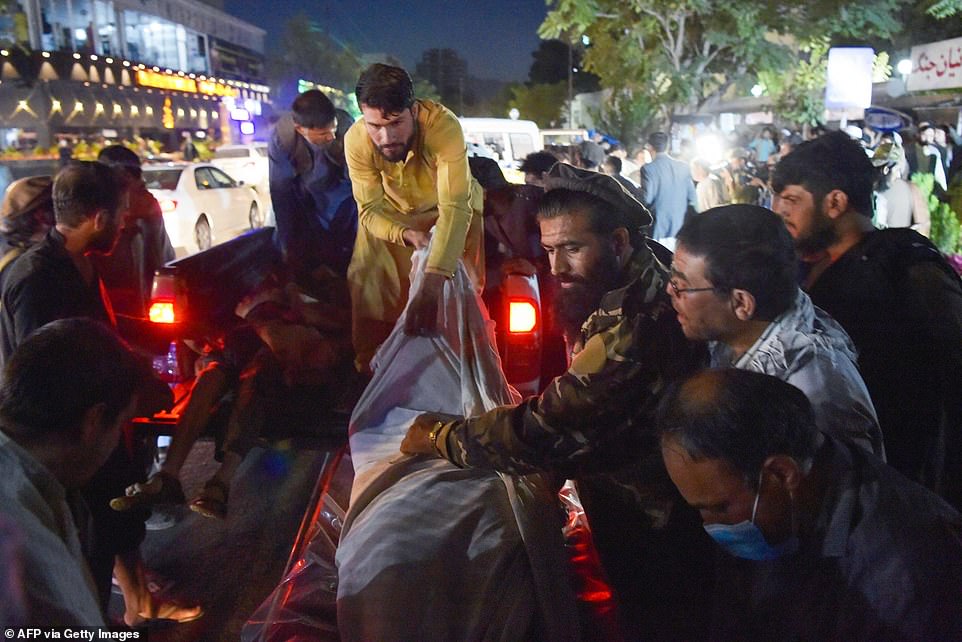 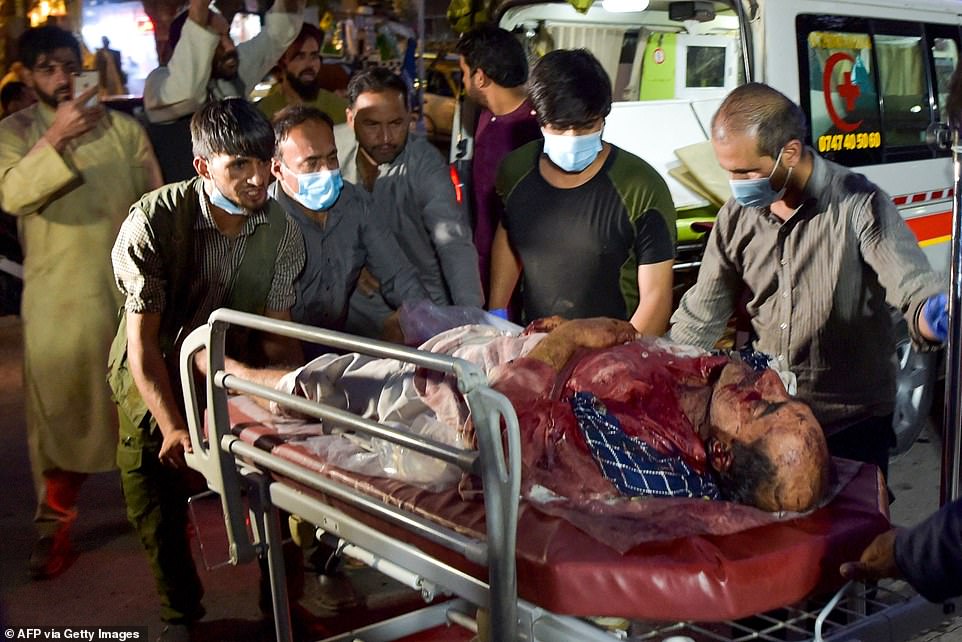 We had fought to stay on in Kabul but ultimately were kicked out on the orders of the MoD or Whitehall, or both. I suspect the prospect of the withdrawal being filmed in excruciating detail was a risk the Government wasn’t prepared to take.

Finally we joined a queue of people boarding through the enormous jaws of a C17 transporter plane. I watched as an elderly couple, holding hands, looked back at the Afghan mountains looming over the airport. Mountains that are the very essence of Afghanistan.

It seemed to me they were saying goodbye, one last look at their country. They clutched each other for a moment and turned. They will never come back.

On landing in Doha, we left our fellow travellers on the runway. Split from them by our passports and privilege. The evacuees were told to sit and wait on the tarmac. They are, of course, the fortunate ones because they got out of Afghanistan. But their lives have been altered immeasurably in just over a week.

A bag each is all they have. They will go to countries, communities and cultures that are utterly alien. At least they will survive.

We still feel guilty about departing – me, my producer Dominique, Sky colleague Martin, and our cameraman Toby. An easy exit for a group of journalists guaranteed safety by our soldiers.

I’ll bear that guilt for some time and I’ll accept the jibes and scorn for leaving. But I will say this: if we hadn’t been there, nobody would have seen any of the scenes of horror and desperation that have engulfed this entire operation. I’ve reported on the pain and grief of the war in Afghanistan for two decades. But I can’t think of anything worse than the horrors I’ve seen in the past two weeks. 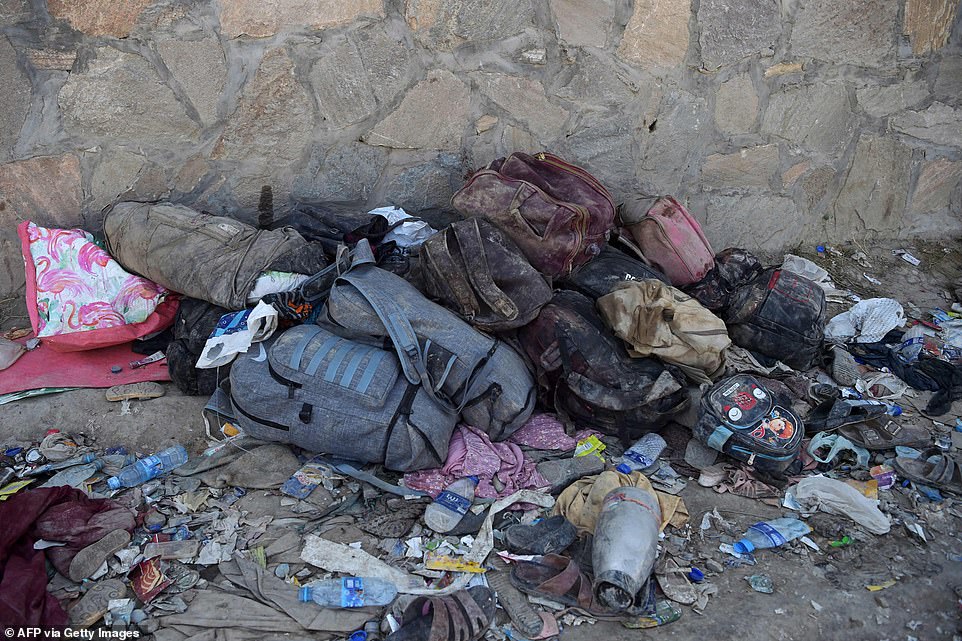 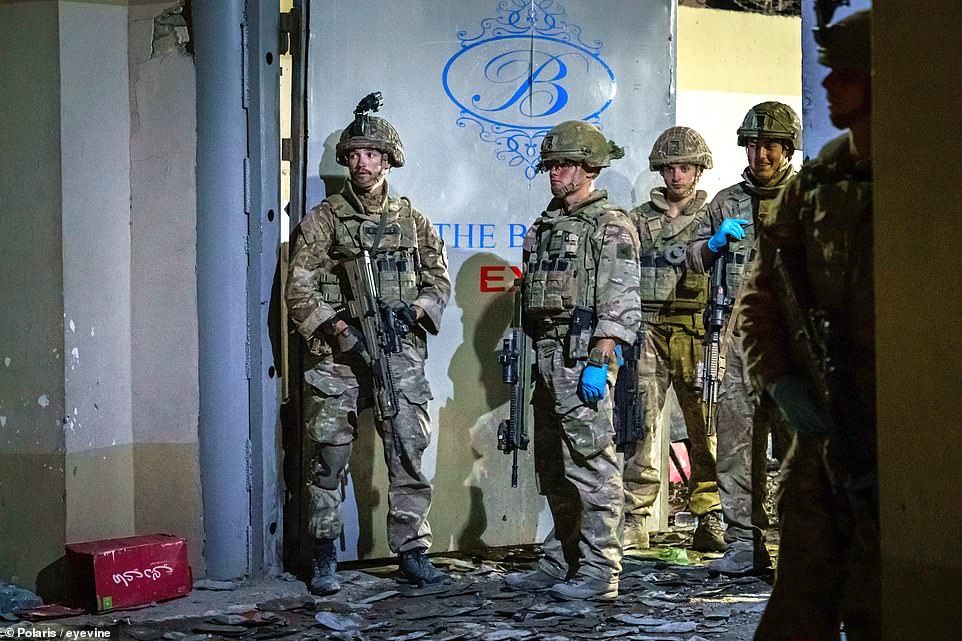 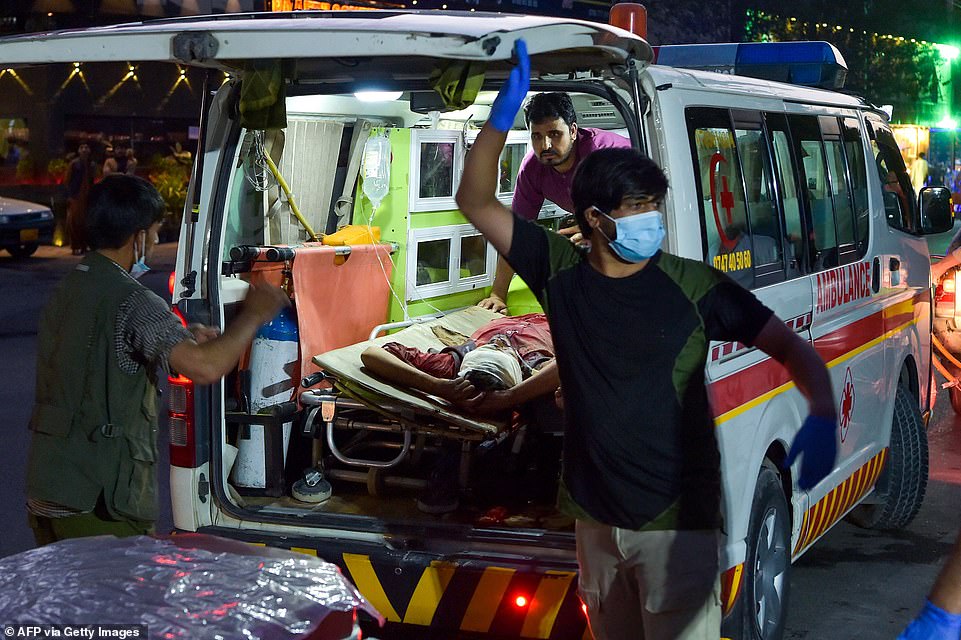 Medical staff bring an injured man to a hospital in an ambulance after two powerful explosions, which killed at least six people, outside the airport in Kabul on August 26, 2021 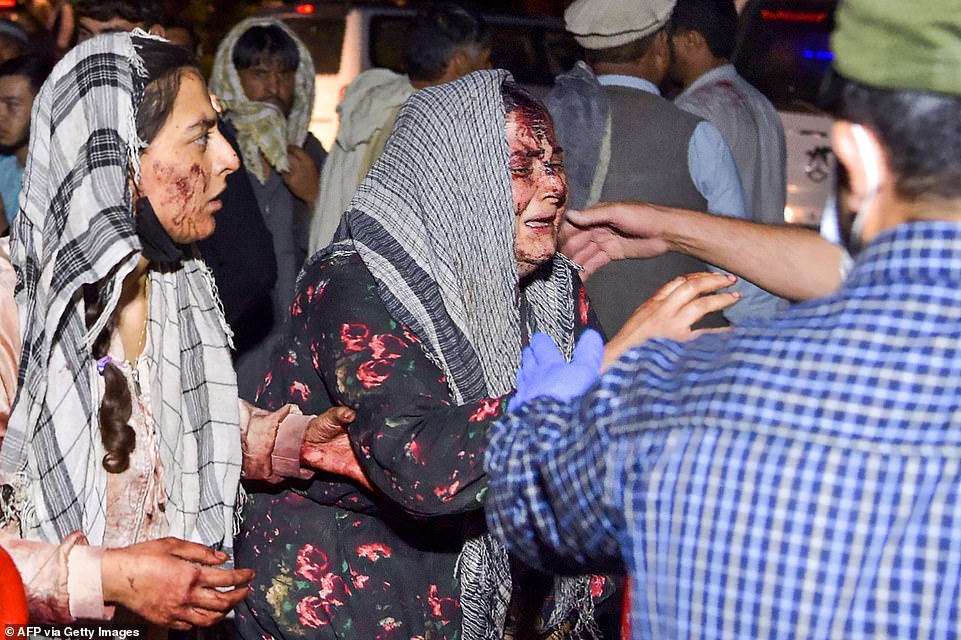 Wounded women arrive at a hospital for treatment after two blasts outside the airport in Kabul on August 26, 2021

My last visit, about seven years ago, was to cover the election of the current president, Ashraf Ghani, who promised his people a new era of governance and a move towards lasting peace and prosperity.

Those dreams are now shattered – as became clear when I returned to Kabul on August 12.

I am still scratching my head as to how a superpower was brought to its knees by a bunch of blokes driving around in pick-up trucks with Kalashnikovs in the back. The biggest mistake came in 2002.

Just as the war against the Taliban had effectively been won, the decision was made to switch resources to the war in Iraq.

The focus changed, the Taliban grew and grew in strength, and we have been playing catch-up ever since.

The most surprising thing about the suicide bomb attacks was the West’s confident warnings that they might happen.

If their intelligence is that good, how did we reach a point where we didn’t know that all these cities were going to fall so quickly? And why was the evacuation planned on the basis of Kabul being held for a considerable period of time, only for it to capitulate in a day and a half?

In general, the Taliban’s battle plans seem to be drawn up on the back of a cigarette packet. But over the last few weeks they cleverly exploited the Kabul government’s failure to get vital supplies to forces out in the field.

Hemmed in very quickly with little resupply, those forces gave up fighting.

The Taliban’s masterstroke lay in offering to let them go if they gave up without resistance.

In some cases, it was left to local police forces to defend their neighbourhoods.

One of my most distressing interviews was with Farida Khurasani whose husband and brother, both police officers, were killed by the Taliban in the northern city of Kunduz after they were attacked in their police station. She told me they were burnt to death.

She escaped with her two children and I found them sleeping rough in Kabul’s Shahr-e Naw park, along with some 1,800 other families fleeing the fighting once again raging across Afghanistan.

Like so many of the people we met, Farida was angry at the government and felt abandoned.

Throwing dirt in the air, she yelled: ‘Look what we are living in!’

There are many such impromptu camps spread across the country, full of equally enraged and frightened people.

Initially we were based in the centre of Kabul and it was from the roof of our hotel that we saw the first Taliban fighters enter the city.

At a news conference they said they recognised the rights of women ‘that Islam gave them’ and they would be able to go to school and teach and work in hospitals.

This stance should set alarm bells ringing: a sharia interpretation of women’s rights, which by all western standards and much of the rest of the world, isn’t at all a respect for women’s rights, as we know them.

I immediately noticed a difference driving around Kabul compared with the days before.

People on the streets were no longer wearing jeans and T-shirts, they had changed into traditional shalwar kameez clothing, and virtually no women were to be seen.

At the airport, we watched the horrific scenes that unfolded as tens of thousands of people camped on the approach road tried to rush their way through, with people at the front of the queue crushed to death.

So terrible were the images that, as we sent the footage featuring dead bodies back to the UK, we had to warn our editors to steel themselves for the distressing content. 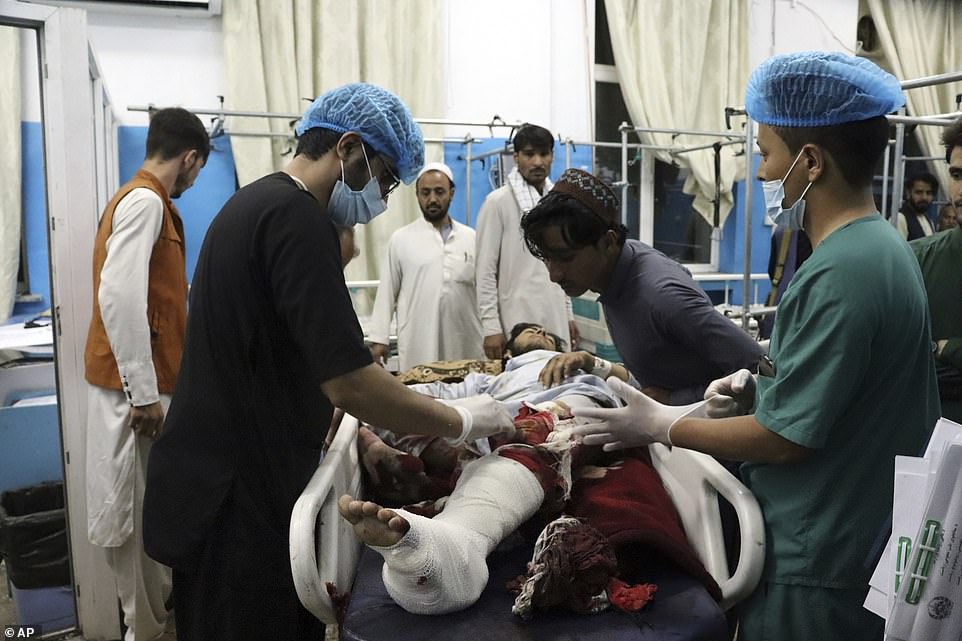 Medics treat a victim of the attack at a hospital in Kabul. Hospitals in the city are struggling to cope with the number of people injured in the blast 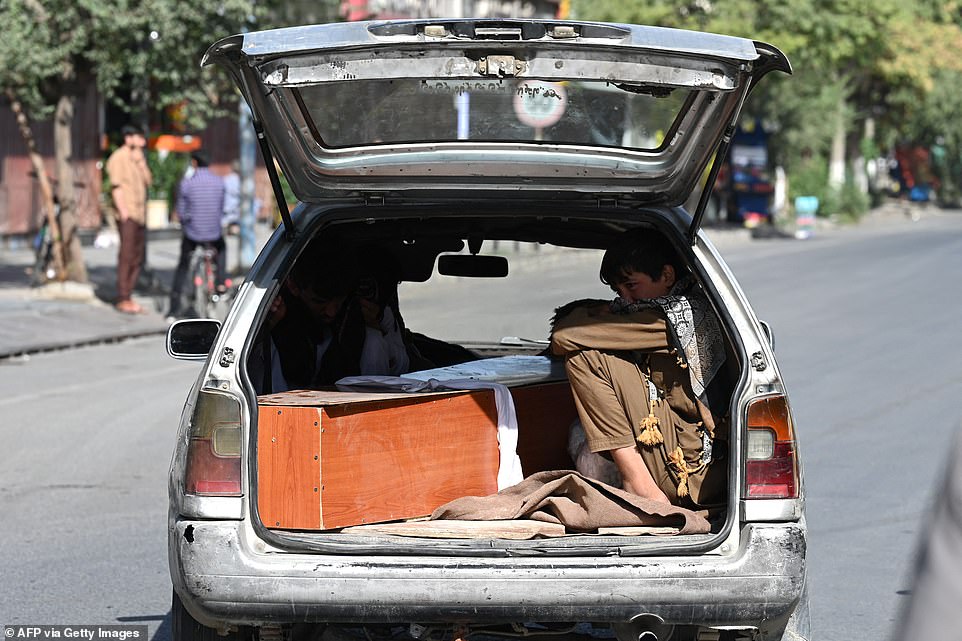 ‘Is this a stabilised withdrawal from Afghanistan?’ I thought. It looked like death to me, death trying to reach freedom.

What hit me every time I went outside the hotel compound was the number of very young children enduring all of this.

It must be so, so terrifying for them. It’s noisy, and there are constant gunshots and shouting – it is heartbreaking.

In the coming days the crowds were brought under control by armed Taliban fighters acting as security guards and administering vicious beatings with canes.

There was nothing the Paras could do but hold the line and every day leading up to our departure seemed worse.

Among the thousands still queuing in burning temperatures there was growing panic.

The hours were counting down towards the August 31 deadline for withdrawal, and they knew it.

The only chance now for those who served as translators for the British forces, along with others deemed to have worked against the Taliban, is to return to the villages where their kin may protect them.

But the Taliban are in those villages too and they may be informed on by neighbours willing to sell them down the river.

One hope lies in a possible uprising. I wouldn’t discount it because young people born in the past 20 years (nearly two thirds of Afghans are under 25 years of age) are used to Western ways, the internet and smartphones and won’t want to go back to some sort of medieval nonsense run by a bunch of criminals.

And they are, by and large, just that, the most influential security people within the Taliban organisation belonging to the Haqqani Network, a cartel that sells opium around the world.

Further down the chain are the vicious thugs who take over villages and towns and act like gangsters rather than spiritual leaders.

We know that because people we are close to are already getting messages saying things like: ‘You owe me $4,000 and if you don’t pay me I’m going to kill you.’

There’s a huge brain drain going on and, as other countries are prepared to take them in, Afghanistan will be left with a rump of bearded men who go to the mosque but are not capable or experienced or educated enough to run a country.

Right now, it looks as if that’s what the country will end up with – the trillions of dollars spent, the thousands of lives lost, the sheer scale of the international presence in this poor landlocked country all coming to nought.

The upset, the pain, and the deaths – including 457 British troops and 2,352 Americans – almost defy comprehension.

Shortly before writing this I phoned a British Army officer back at the Baron Hotel and asked him how things had been in the hours since our departure.

‘Grim,’ he said, explaining that between 15 and 30 hardcore Taliban had taken over the entrance and were beating people.

Iggy Azalea boasts that her haters have made her a millionaire 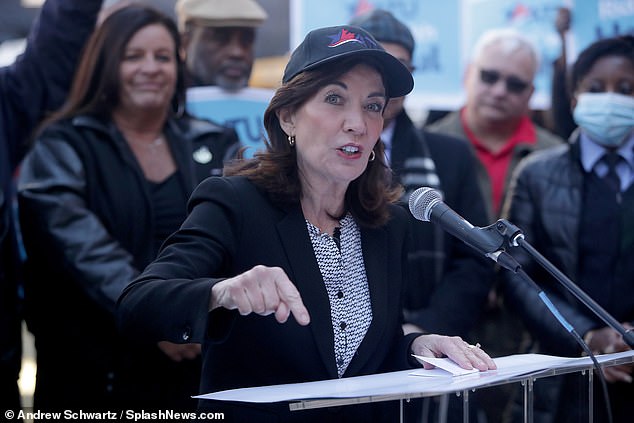 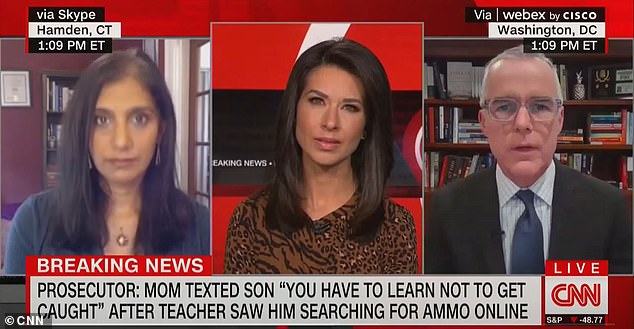 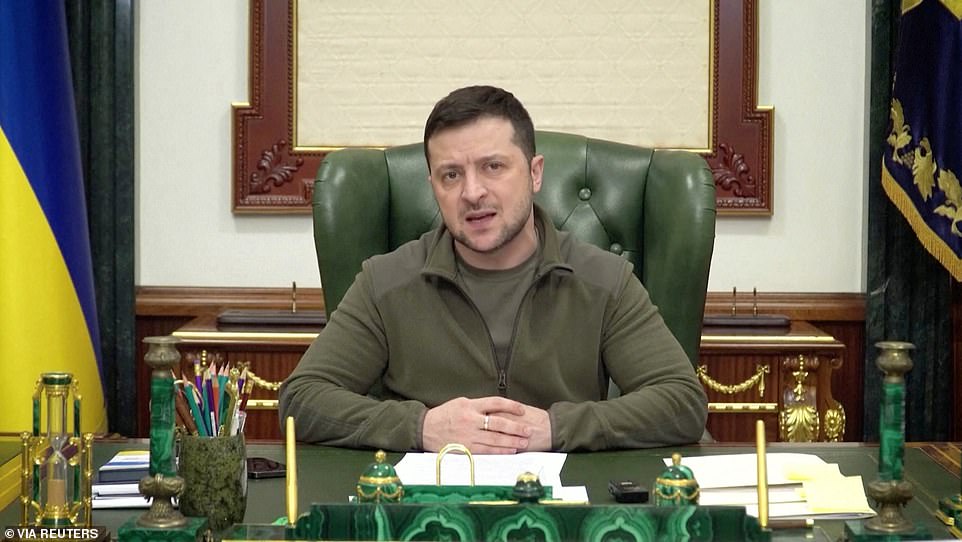