If you wondered why New Orleans is predicted to be without power for so long after Hurricane Ida swept through, wonder no more.

DailyMail.com has obtained striking images that show, from just one toppled transmission tower, the extent of the work needed to bring electricity back to the Big Easy.

The 400-foot Entergy transmission tower collapsed Sunday in Bridge City as Hurricane Ida ripped through Louisiana. The tower is part of the system that carries power to New Orleans and the east bank of Jefferson Parish, with its power lines spanning 3,800 feet to another tower across the Mississippi River.

Exclusive DailyMail.com photos show the tower completely toppled on its side and laying in a muddy field, with the bottom part crumbled.  The tower is tangled in its own wires that are now soaked in the river.

As of Friday, electricity was still not restored to many parts of New Orleans. 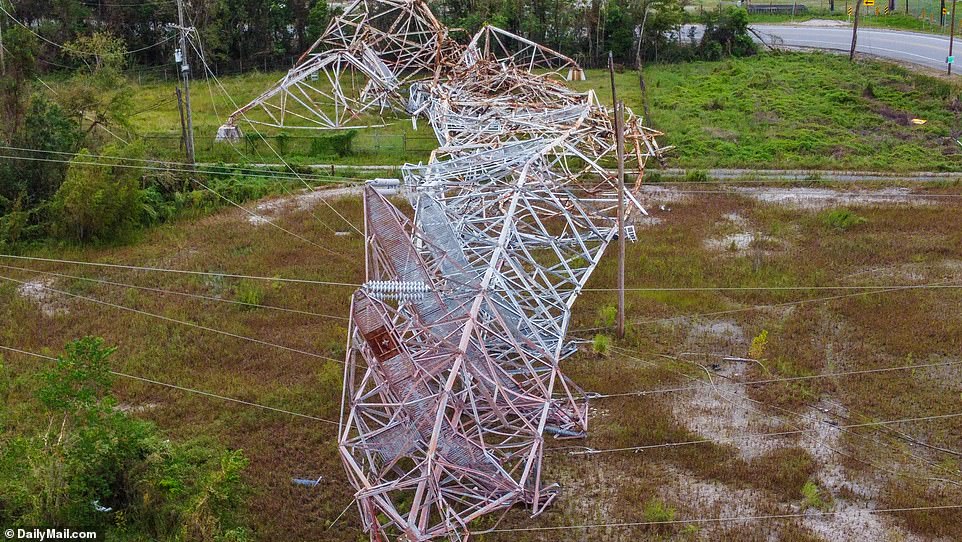 Exclusive DailyMail.com photos show the tower completely toppled on its side and laying in a muddy field, with the bottom part appearing to have crumbled 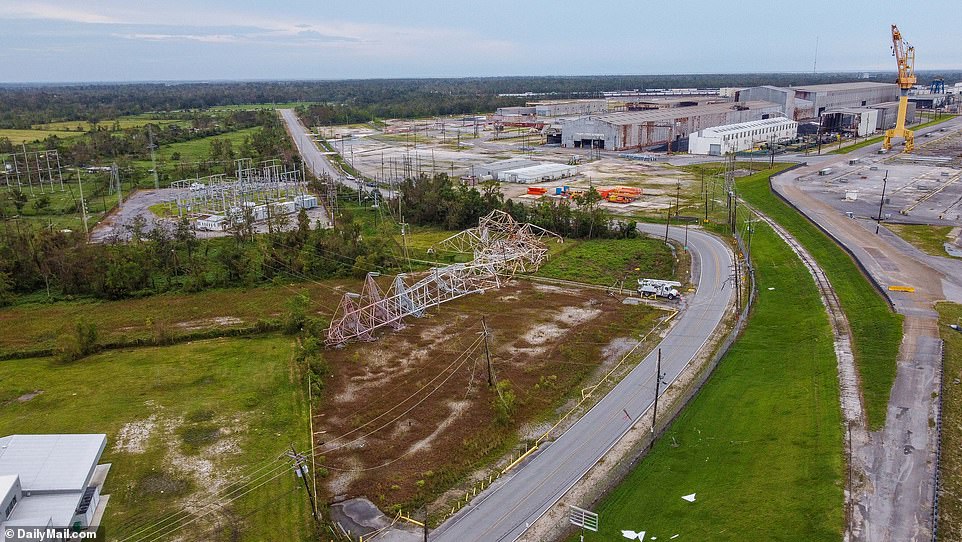 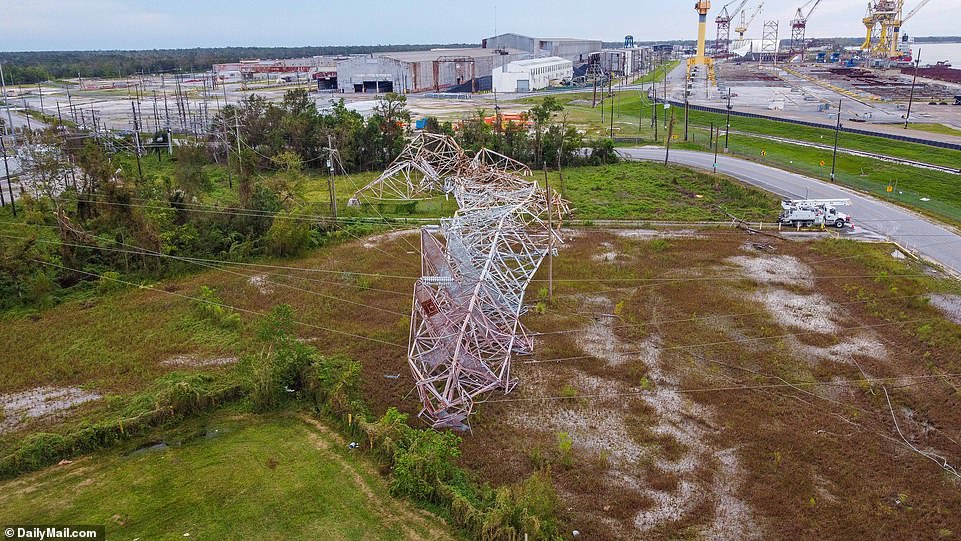 Officials say a plan to get the power back on is in the works.

Helena Moreno, President of NOLA City Council, said Friday that power will be fully restored by September 8 for many New Orleans neighborhoods.

Entergy Louisiana CEO Phillip May said, ‘All of those towers went through Hurricane Katrina without wavering.

But, he said, Ida brought ‘much higher wind fields,’ damaging them way more than in the 2005 tragedy.

Entergy Restoration Prioritization Branch Director Aaron Hill told WLBT earlier this week: ‘Hurricane Ida was very powerful, and it impacted a lot more than one tower or one transmission line.’

Hill added that the tower is just one of many factors in the city-wide outage and they are still investigating the cause. He said that residents could still receive power if one tower is damaged. 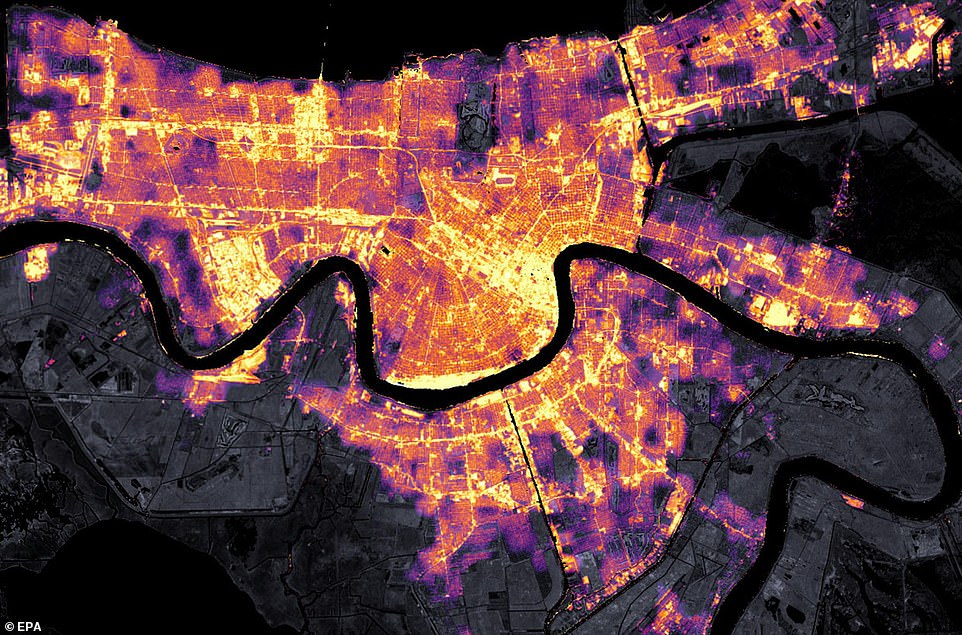 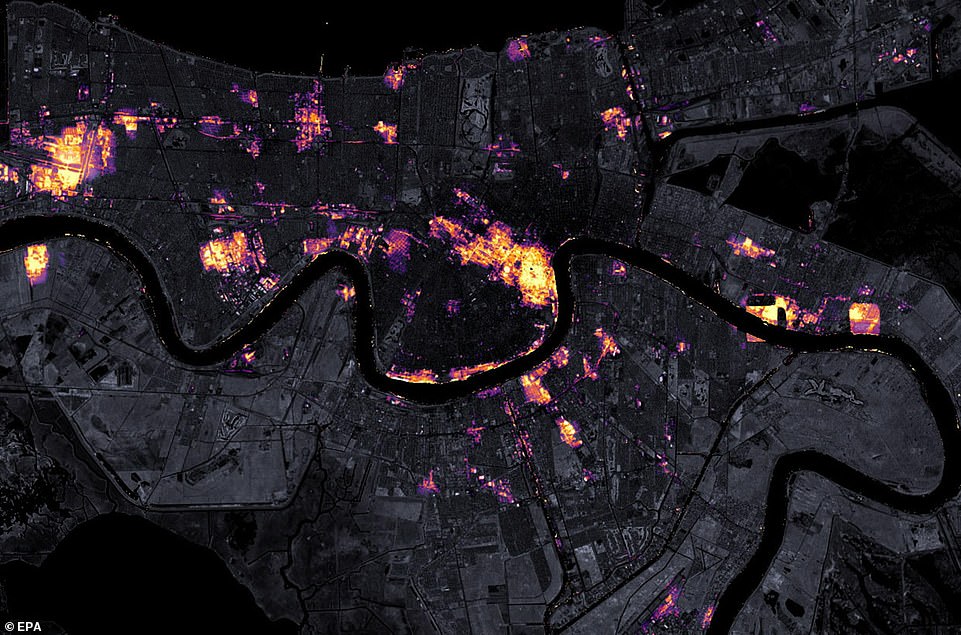 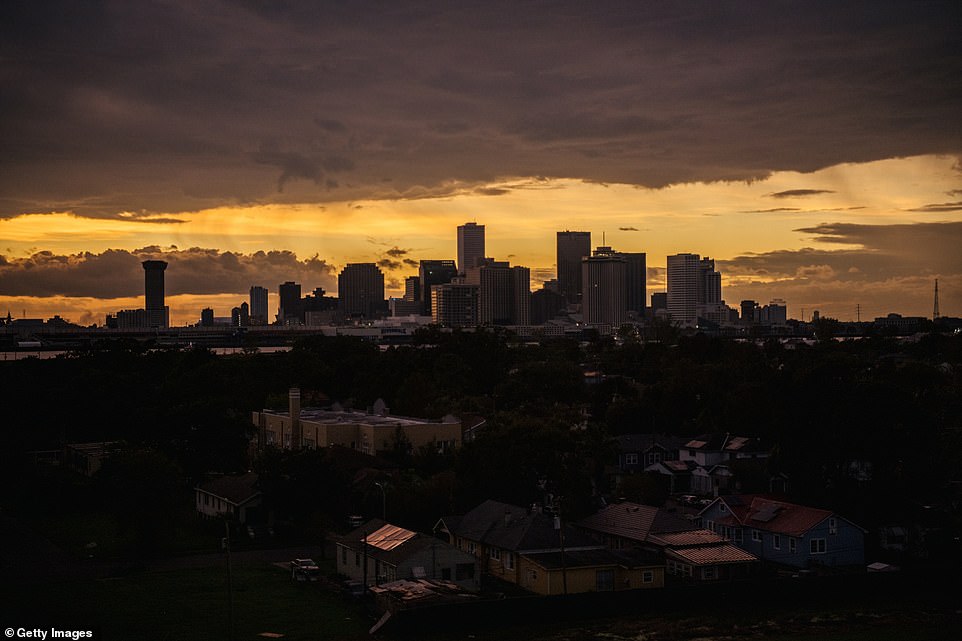 Hurricane Ida slammed into the Bayou State on Sunday as a Category Four hurricane with 150 mph winds and torrential downpours. It was the fifth strongest hurricane to make landfall in American history

All of New Orleans was left without electricity in the aftermath, with officials relying on generators to power the local hospitals, as more than one million reported power outages.

On Thursday, some electricity returned to parts of the city, but more than 900,000 people in the state are still in the dark, and do not know when their suffering will end.

Even as the power was slowly coming back on before dawn on Thursday along Bourbon Street and other parts of New Orleans, the widespread loss of electricity could be seen from space.

In Mississippi, the Associated Press reports, more than 300,000 people remained without electricity on Thursday.

And with water treatment plants overwhelmed by floodwaters or crippled by power outages, some places were also facing shortages of drinking water. About 441,000 people in 17 parishes had no water, and an additional 319,000 were under boil-water advisories on Wednesday, federal officials said.

Roughly 582,000 people were able to evacuate from New Orleans and the surrounding parishes in the three days before the storm, according to a tweet from Shawn Wilson, secretary of the Louisiana Department of Transportation, citing an analysis of cellphone and other technology ping data.

Many others who decided to ride out the storm left following official announcements that it may take weeks for electricity to be restored. 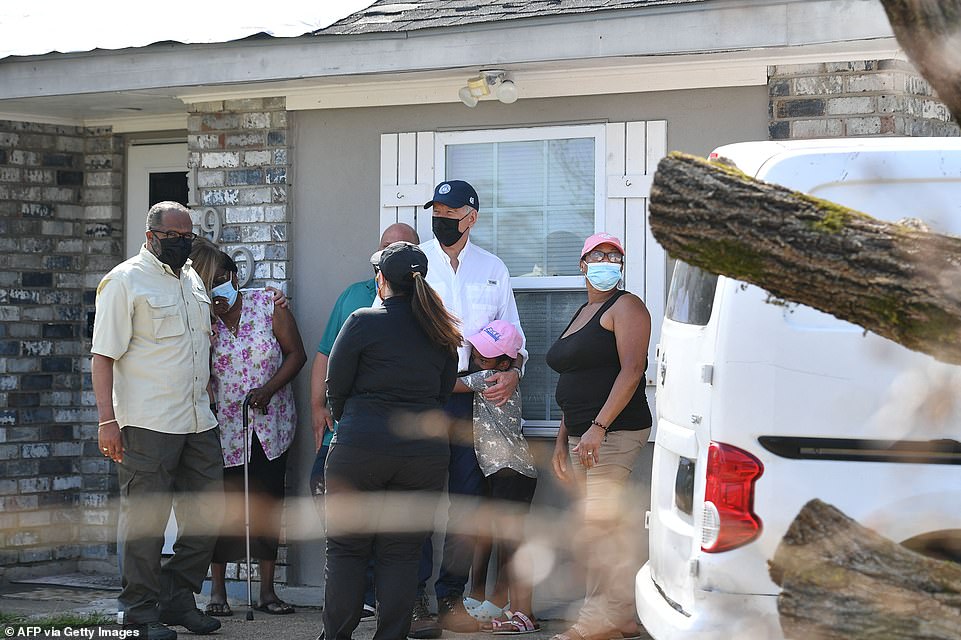 President Joe Biden tours a neighbourhood affected by Hurricane Ida in LaPlace, La., giving a hug to a child 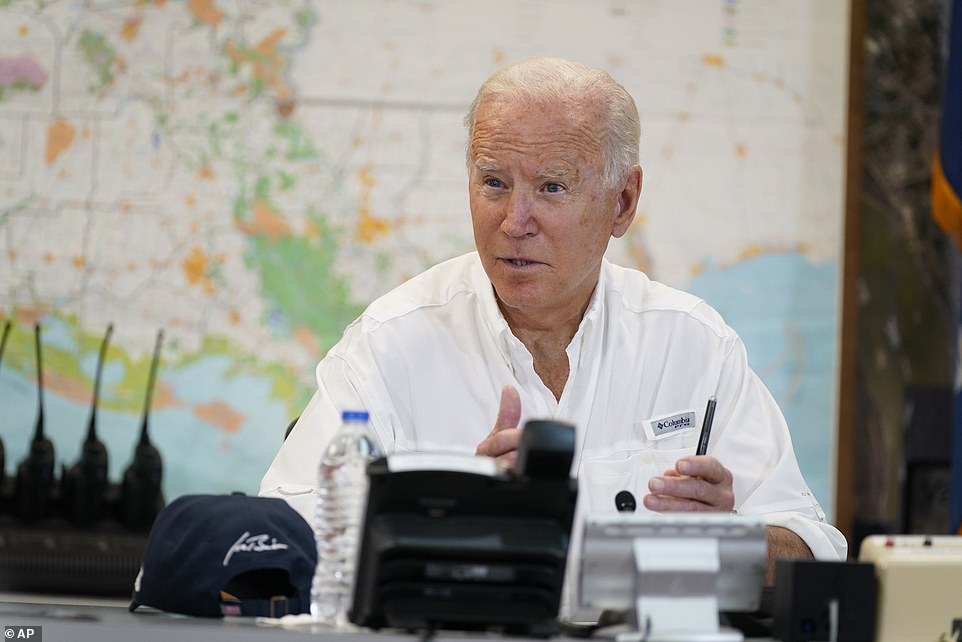 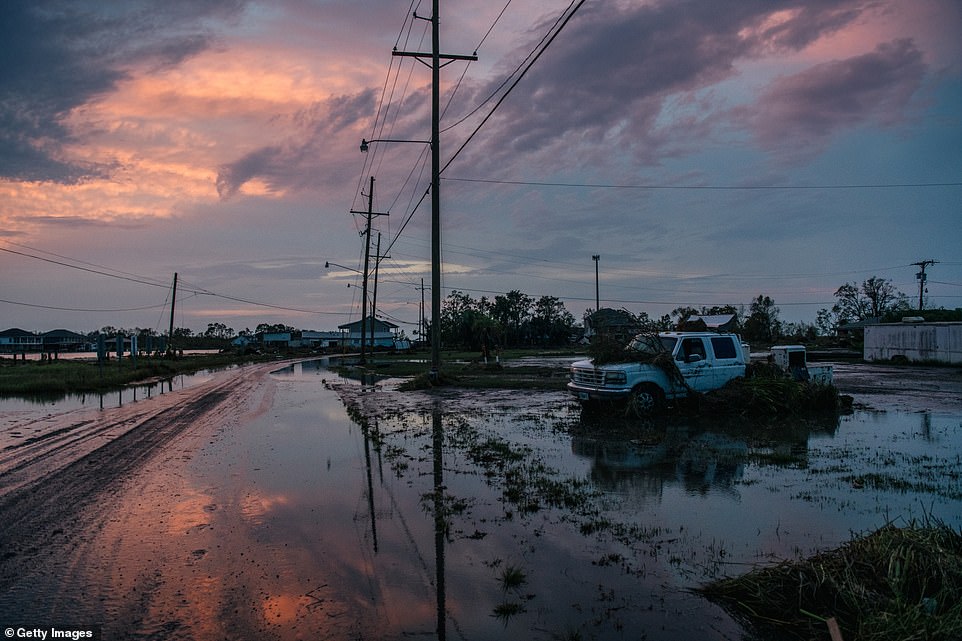 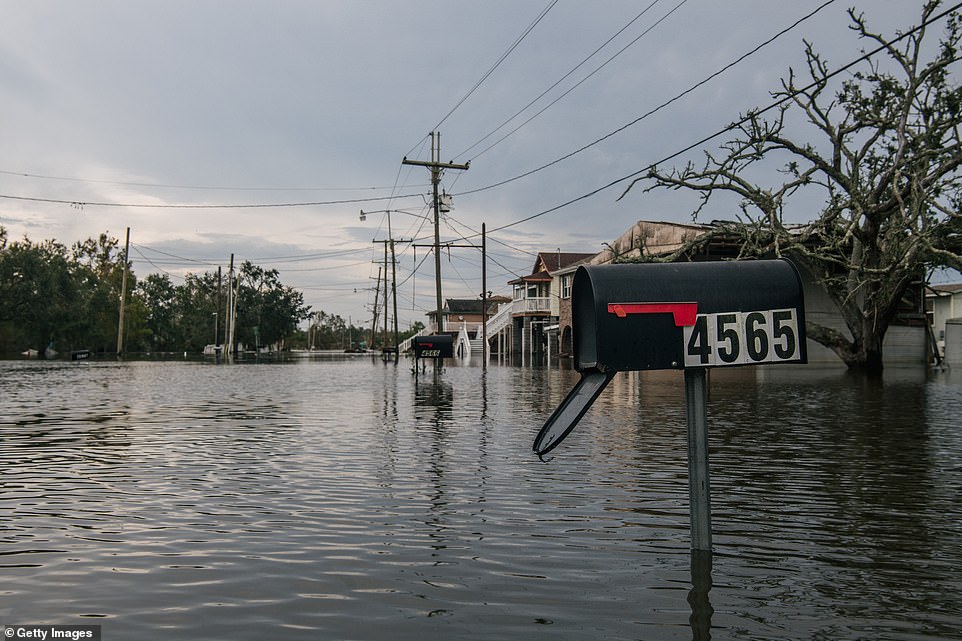 Jean Lafitte was still flooded on Wednesday, preventing trucks with food and supplies from getting through 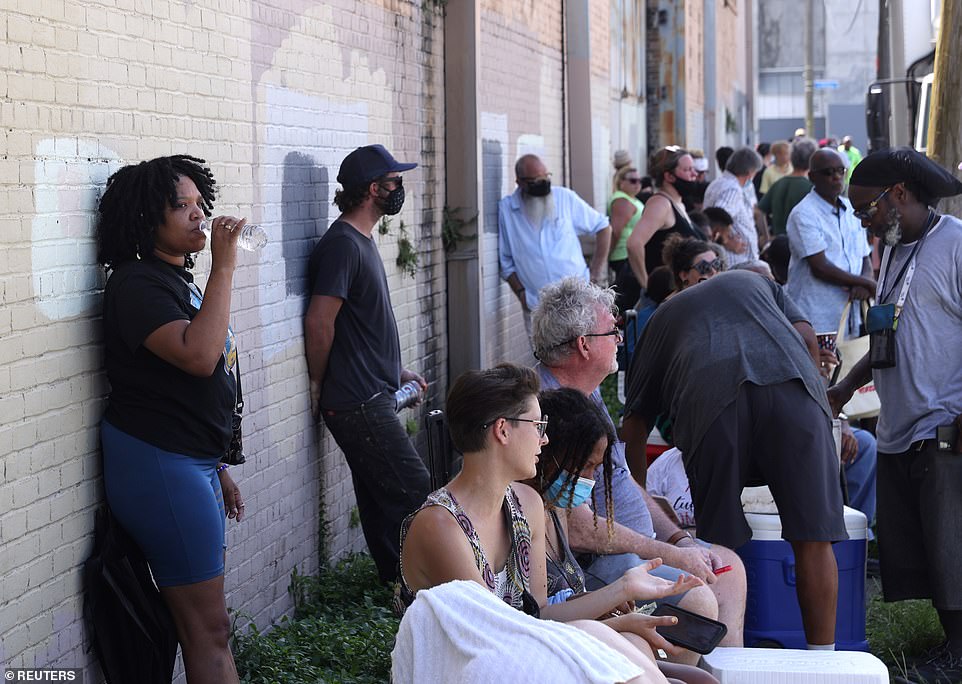 President Joe Biden flew to New Orleans Friday to view the power-less city amid a frantic recovery effort to clear debris and get the power on.

The president visited some of the hardest hit areas south of LaFourche, Louisiana where the Category 4 Hurricane made landfall and ripped through structures and devastated entire communities.

He took an aerial tour of some of the hardest hit communities, including Laffite, Grand Isle, Port Fourchon and Lafourche Parish, while touring a neighborhood in LaPlace and giving a speech.

Biden told the nation Thursday he had been closely monitoring the devastation caused by Hurricane Ida after the Category 4 Hurricane slammed into the Louisiana coast, bringing death and destruction on the way as it made its way up through Pennsylvania and New York.

‘While the catastrophic flooding wasn’t as severe as it was during Hurricane Katrina 16 years ago, Ida was so powerful that it caused the Mississippi River literally to change direction – the flow – change the flow temporarily,’ Biden noted.

He said the ‘good news’ is that the $15 billion levee system put in place around New Orleans after catastrophic failures during Hurricane Katrina appears to have held.

‘It held. It was strong. It worked,’ he said. ‘But too many people and too many areas are still unprotected and saw a storm surge and flooding that was devastating,’ Biden said. 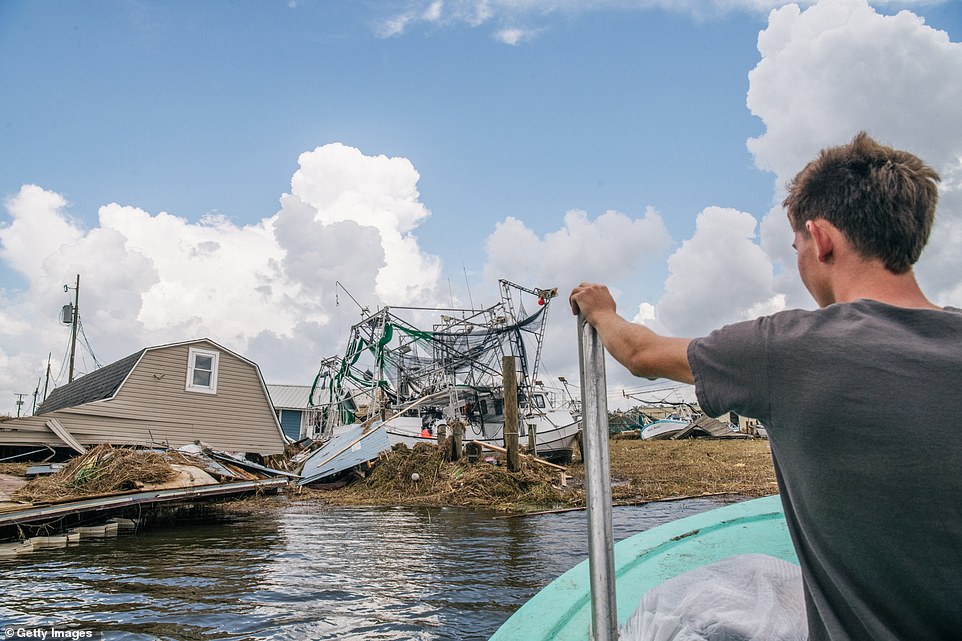 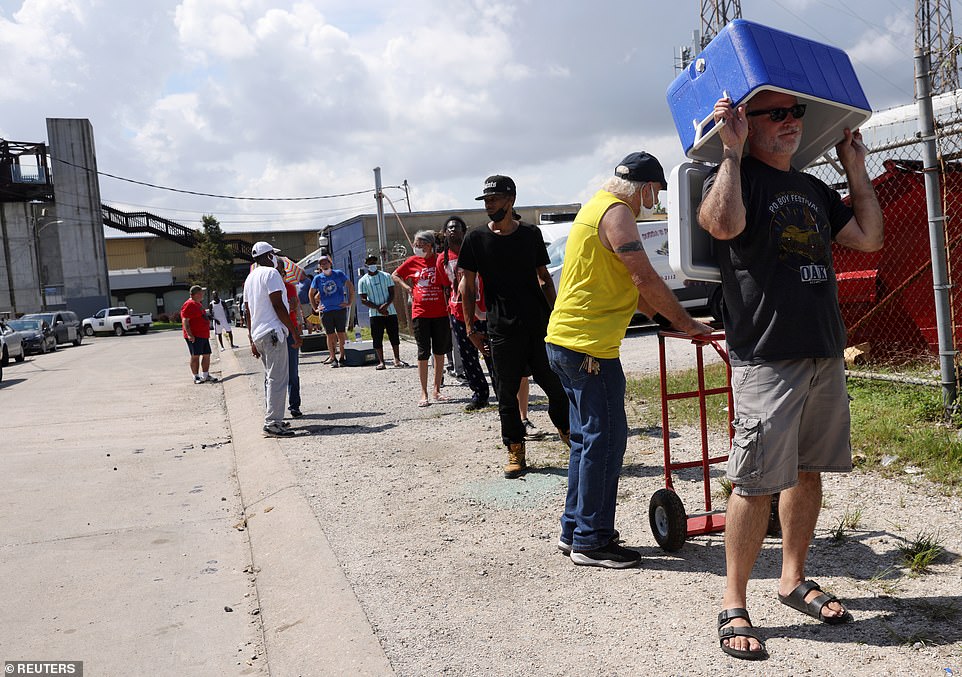 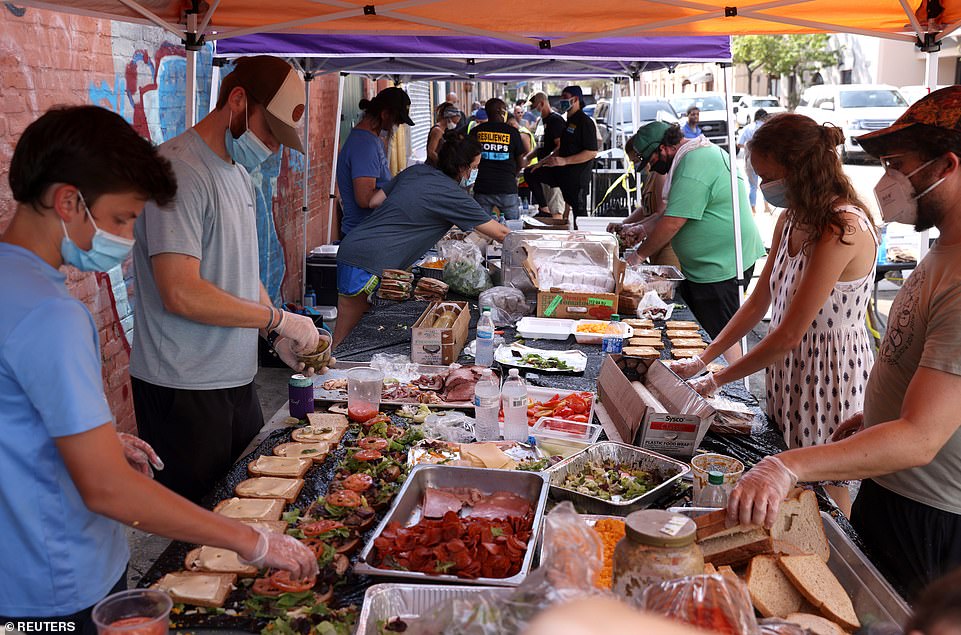 Oliver Morse, 13, (left) helps Conner McCoy put together sandwiches to be given to people for free as New Orleans residents continue to struggle in the aftermath of the storm

The first confirmed victim of the storm was a 60-year-old man who died in Louisiana on Monday after a tree fell on him in Prairieville, about 15 miles from Baton Rouge. Another victim died while attempting to drive his vehicle through the flooded streets of New Orleans.

Additionally, a Louisiana man was eaten by an alligator while wading through waist-deep floodwater in a shed outside their home, before he fell beneath the water. Authorities have not yet been able to locate him.

On Tuesday, two 19-year-olds working for a local electricity company in Alabama were electrocuted when trying to repair power lines.

And two others were killed Monday night when seven vehicles plunged into a 20-foot-deep hole near Lucedale, Mississippi, where a highway had collapsed after torrential rains. 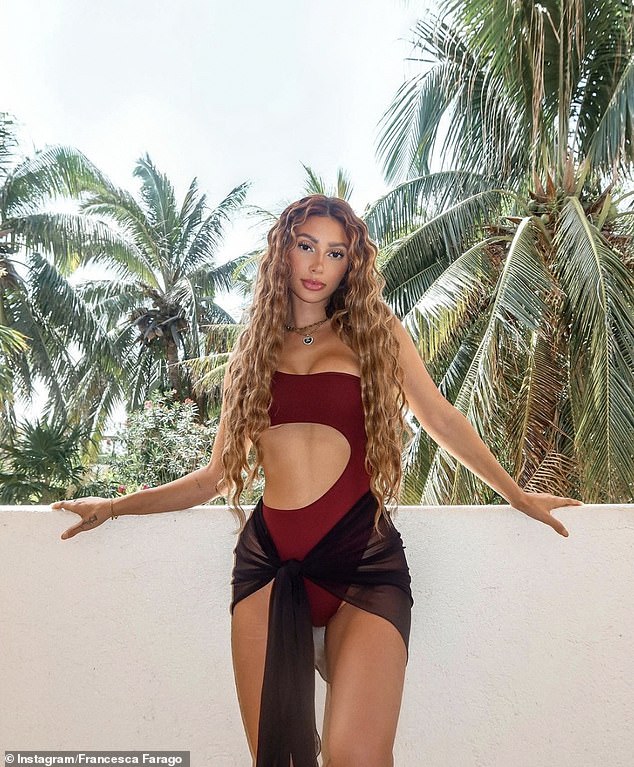 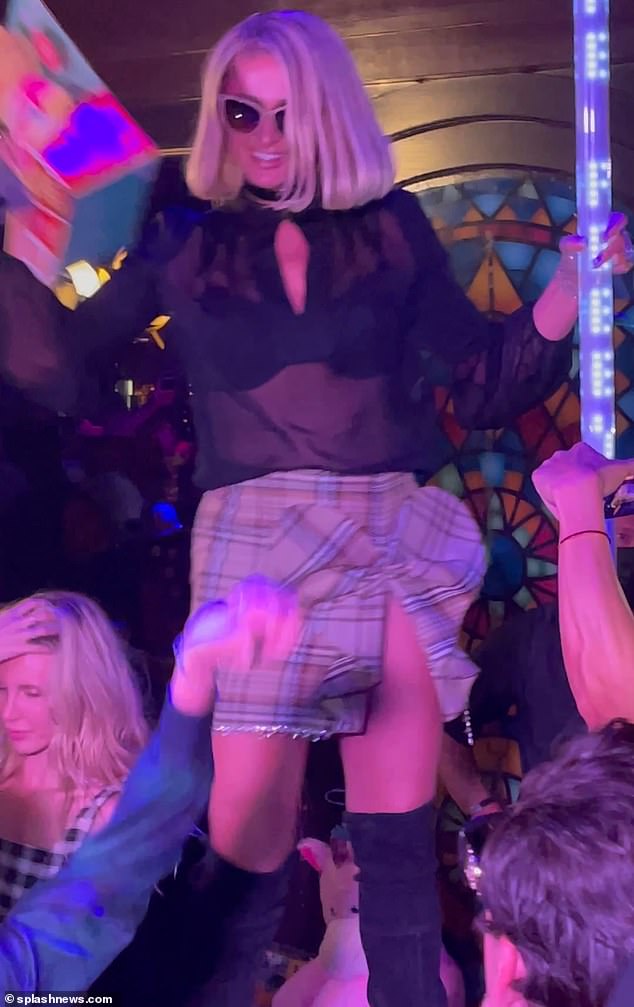 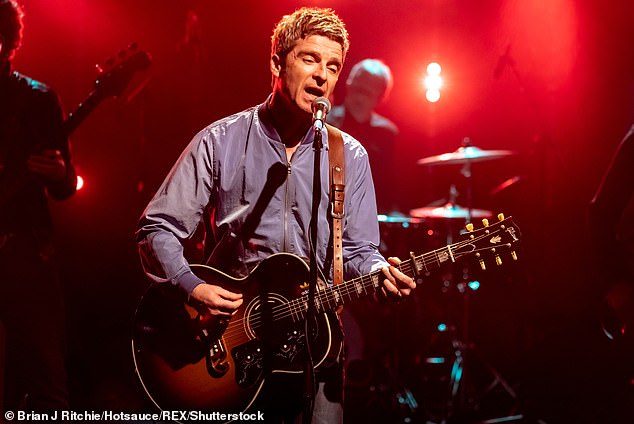 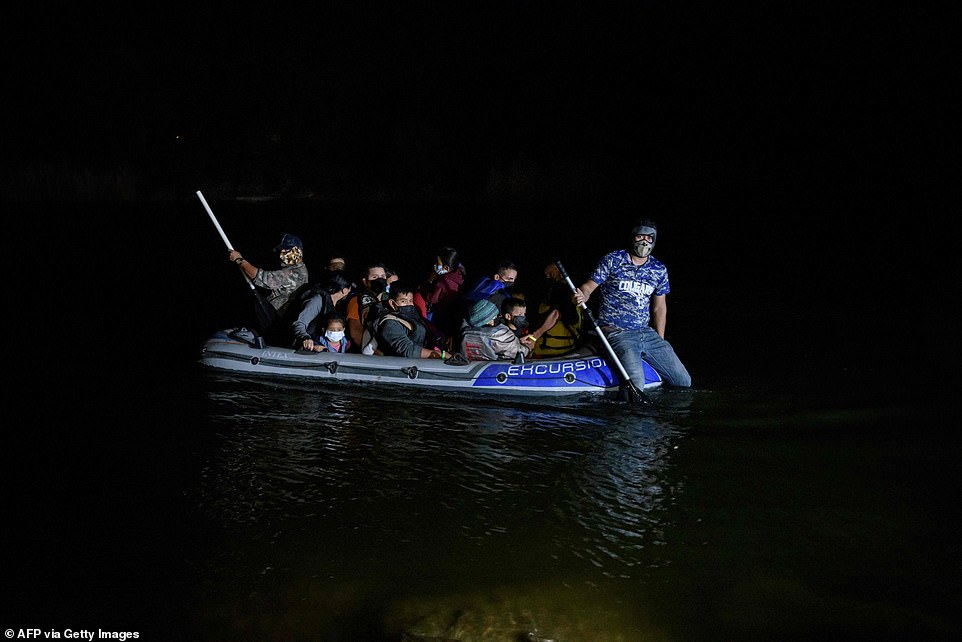 Bitcoin Price Prediction: BTC/USD Gets Ready for a Spike Above $37,000
34 mins ago