Saturday Night Live comedian Michael Che has been accused of anti-Semitism after cracking a joke about Israel’s vaccination efforts.

Che made the offending quip during last night’s Weekend Update, saying: ‘Israel is reporting that they’ve vaccinated half of their population.

‘I’m going to guess it’s the Jewish half.’

The joke elicited a small laugh from the studio audience before outraged viewers flocked to Twitter to accuse Che of perpetrating anti-Semitic and anti-Israeli tropes.

Many critics demanded an apology from the host for his suggestion that Israel is unfairly giving vaccine priority to Jewish residents – despite statistics showing that is not the case.

Saturday Night Live comedian Michael Che has been accused of anti-Semitism after cracking a joke about Israel’s vaccination efforts during a Weekend Update segment. ‘Israel is reporting that they’ve vaccinated half of their population. I’m going to guess it’s the Jewish half,’ he said

‘So are we not going to talk about Michael Che’s antisemitic joke on weekend update?? @nbcsnl maybe be better than antisemitism,’ one viewer tweeted.

‘#MichaelChe of @nbcsnl engaging in more antisemitic humor. Stoking hatred against Jews by perpetuating libels is no laughing matter,’ another wrote.

‘Why make such a tasteless, humorless joke that does nothing but spread an ugly antisemitic lie, Michael Che? Why do this? Yuck,’ a third viewer added.

A recent article in the Christian Science Monitor detailed how 43 percent of Israel’s Arab residents over the age of 60 have been vaccinated, compared with 75 percent of Jewish residents in that age group.

But after a recent government push to improve numbers, vaccinations of Arab Israelis now were rising.

On social media, SNL critics said the vaccine was no laughing matter.

‘43% of Israel’s Arab citizens have been vaccinated – and that already large # would be even higher if the kind of hateful propaganda spread by Michael Che weren’t around,’ one man wrote. 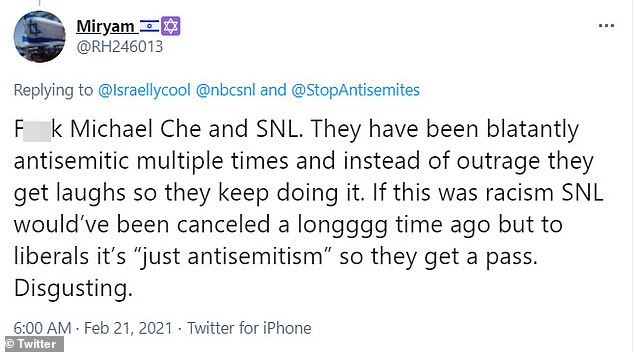 Several critics pointed to a recent article in the Christian Science Monitor detailing how 43 percent of Israel’s Arab residents over the age of 60 have been vaccinated, compared with 75 percent of Jewish residents in that age group, though the disparity has been pegged to Arab mistrust of Israel and the vaccine as a whole – something that education efforts are turning around 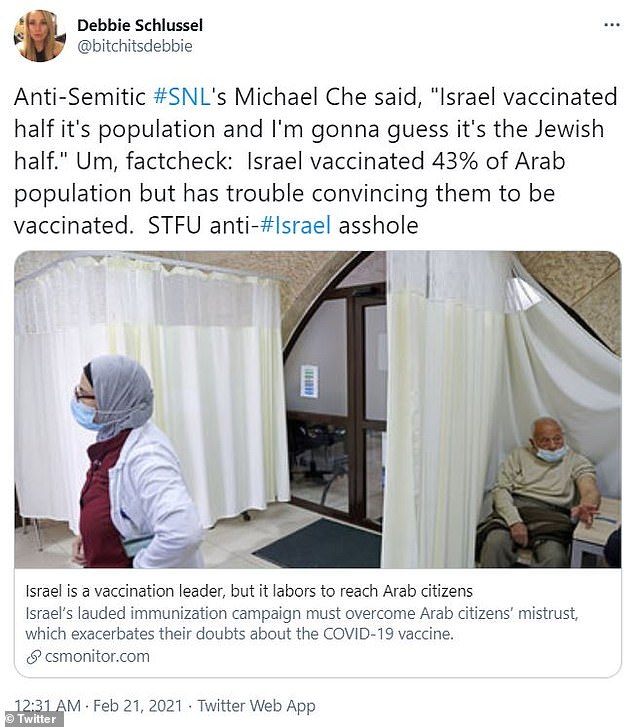 The backlash against Che came as SNL received renewed criticism for once again declining to skewer President Joe Biden – a far cry from the frequent barbs that were dished out at his predecessor, Donald Trump, during his four years in the Oval Office.

The latest show opened with a skit  mocking Senator Ted Cruz for jetting off to Cancun while his home state was in the throes of a humanitarian crisis and eviscerating Governor Andrew Cuomo for his role in New York’s nursing home deaths scandal.

In the skit, Cruz, played by Aidy Bryant, and Cuomo, played by Pete Davidson, were invited onto a talk show hosted by pop star Britney Spears (Chloe Fineman), who gave the two beleaguered politicians a chance to apologize for their recent actions.

Joining Cruz and Cuomo was Gina Carano, the actress who was fired by Disney and Lucasfilm from her role in the Disney+-streamed Star Wars hit series The Mandalorian.

Carano, played by SNL cast member Cecily Strong, was offered a chance to apologize for an Instagram post in which she compares conservatives in the United States to Jews who were massacred during the Nazi era. 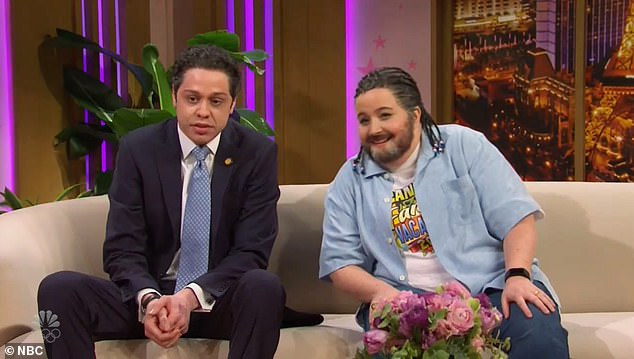 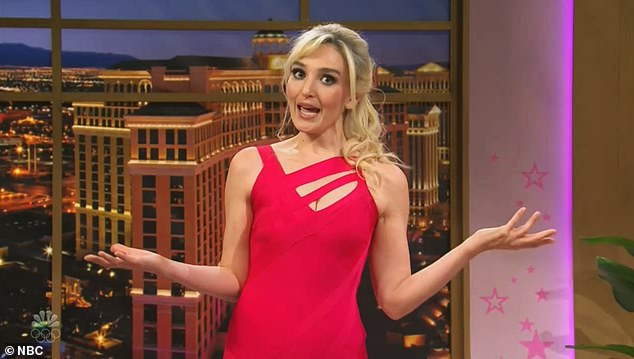 Cruz and Cuomo were invited onto a talk show hosted by pop star Britney Spears, who gave the two beleaguered politicians a chance to apologize for their recent actions. Spears is played above by Chloe Fineman 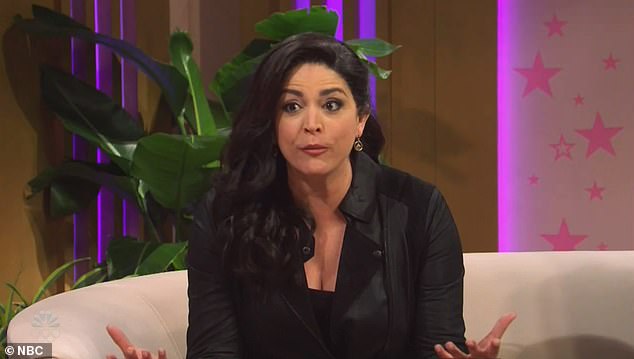 Joining Cruz and Cuomo was Gina Carano, the actress who was fired by Disney and Lucasfilm from her role in the Disney+-streamed Star Wars hit series The Mandalorian. Carano is portrayed above by SNL cast member Cecily Strong

Spears says she started her fictitious talk show, Oops, You Did it Again, so that ‘people can come on and apologize for things they’ve done wrong.’

‘After the ‘Free Britney’ documentary came out, I’m receiving hundreds of apologies a day,’ she says.

Last week, Spears was in the news in real life after a documentary, Framing Britney Spears, streamed on Hulu.

The documentary, which was produced by The New York Times, chronicles Spears’ rise to stardom and her subsequent fall triggered by a decline in her mental health, which led to her finances being placed in the hands of her father.

Spears has gone to court in an attempt to dissolve her conservatorship, which is controlled by Jamie Spears.

The documentary, which inspired the social media hashtag #FreeBritney, painted the pop star in a sympathetic light, prompting her ex-boyfriend, Justin Timberlake, to apologize to her.

Fans of Spears have also demanded apologies from media figures and comedians, including David Letterman, Diane Sawyer, Sarah Silverman, and Perez Hilton, for either making jokes about her mental health more than a decade ago or for casting her in a harsh light.

In the SNL skit, Spears says that the episode of her talk show is sponsored by the Notes app, which people can use for ‘posting a lame apology 20 years too late.’

To the tune of her hit song Toxic, Spears then welcomes Cruz to the show.

Cruz, played by Bryant, is seen carrying a pina colada drink in one hand and wheeling a suitcase in the other. His hair is braided while he is sporting a t-shirt that reads ‘Cancun family vacation.’

‘Hola, everyone!’ Cruz says upon sitting down.

When Spears comments that Cruz looks tan, he replies: ‘I’m not tan. I just cried myself red over my fellow Texans.’

He then takes a sip of his cocktail, remarking: ‘That’s why I drink in their honor.’

Spears reminds Cruz that Texas is in the midst of a crisis due to a massive, statewide power outage and disruptions in water service caused by two snowstorms and sub-freezing temperatures.

Acknowledging the backlash sparked by his trip to Cancun, Cruz said: ‘I’m in a little bit of hot water, which I’m told is a thing no one in Texas has.’ 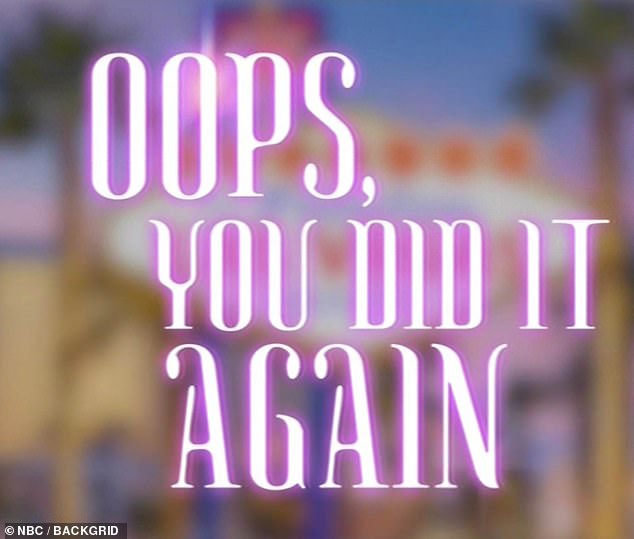 The SNL cold open featured an episode of a fictitious talk show hosted by pop star Britney Spears, Oops, You Did It Again, a play-on-words of the title of her hit song from the late 1990s 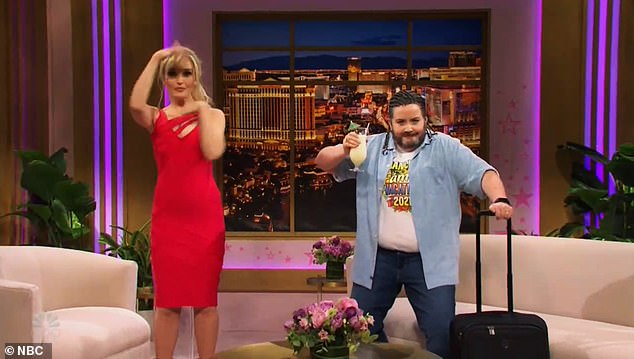 Cruz, played by Aidy Bryant, is seen carrying a pina colada drink in one hand and wheeling a suitcase in the other. His hair is braided Caribbean style while he is sporting a t-shirt that reads ‘Cancun family vacation.’ 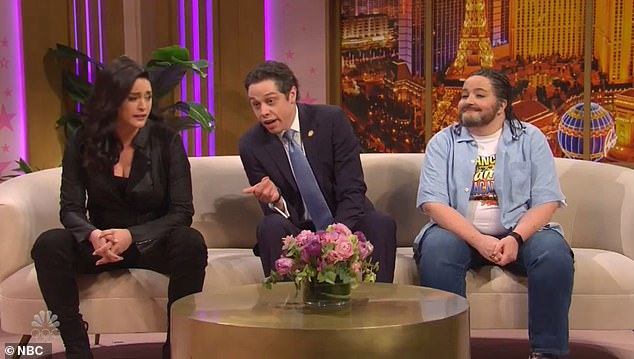 Spears gives Cruz a chance to apologize, and the senator does, in a way.

‘I deeply regret my actions over the last couple of days – mostly flying United,’ Cruz says.

When Spears asks Cruz if he understands why people are calling him a coward, the senator responds: ‘Coward is actually the nicest word I heard.’

He then shocks Spears by asking: ‘Would a coward have the cajones to blame his actions on his young daughters?’

Cruz then jokes that there’s ‘so much for the girls to do in Cancun’ including ‘going to the topless beach’ and ‘taking shots at Senor Frogs’ as well as ‘swimming with sick dolphins.’

In an implicit reference to her legal battles with her own dad, Spears then admonishes Cruz, telling him: ‘As someone who is often blamed for other people’s problems at a young age, maybe leave your daughters out of it because it could really mess up with their heads.’

Spears then invites Cuomo onto the show because he, too, ‘has some splainin’ to do.’

‘Hey, hello, alright, let’s get this over with,’ a gruff Cuomo tells Spears.

When Spears asks Cuomo why he is here, the governor tries to change the topic, touting the fact that ‘indoor dining is back in New York.’ 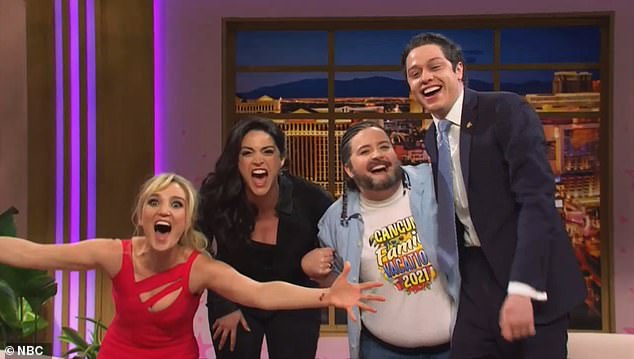 Spears then scolds him, prompting Cuomo to say: ‘I know, it’s because of the nursing home stuff.’

In explaining the scandal, he says that ‘some of the people who died in the nursing homes were not counted as nursing home deaths.’

Cuomo said what his administration did is no different than what they do at Disney theme parks.

‘People die and they move the bodies,’ the governor says. ‘They say, ‘Oh, I guess Brenda died in the parking lot, not on the tea cups’.’

The governor added: ‘We just did the Disney thing.’

Spears finally coaxes Cuomo into apologizing, but the mention of New York Mayor Bill de Blasio prompts him to lose his cool and call him names.

‘What did that bird b**** say about me?’ the governor says as he works himself into a rage.

In real life, Cuomo has been accused of bullying lawmakers who criticize him on his policies.

‘I’m sorry, I get a little angry now and then – and always,’ the governor says on SNL.

Spears then invites Carano, who was victimized by ‘cancel culture.’

When Spears asks her if she wants to apologize for her Instagram post mentioning the Holocaust, she says: ‘I’m actually here for the opposite of that.’

‘On Instagram you said conservatives have it as bad as people living in Nazi Germany,’ Spears says.

‘I never would have made that Nazi comparison if I had known everyone was going to be a Nazi about it,’ Carano replies.

Cruz then tries to sympathize with Carano, but the actress wasn’t having any of it, not wanting to be associated with the senator.

‘If you compare yourself to me, I will blast you to the farthest desert of Tatooine,’ Carano tells Cruz, referencing the fictitious planet from Star Wars.

‘Anything to get out of Texas,’ Cruz replies. 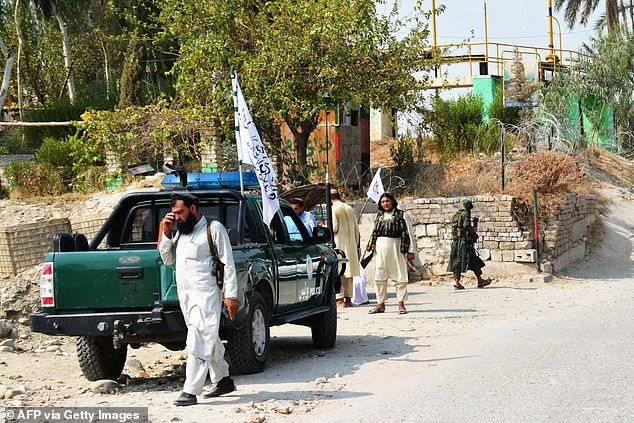 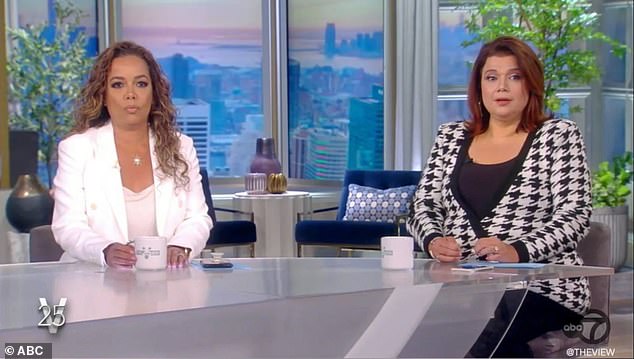 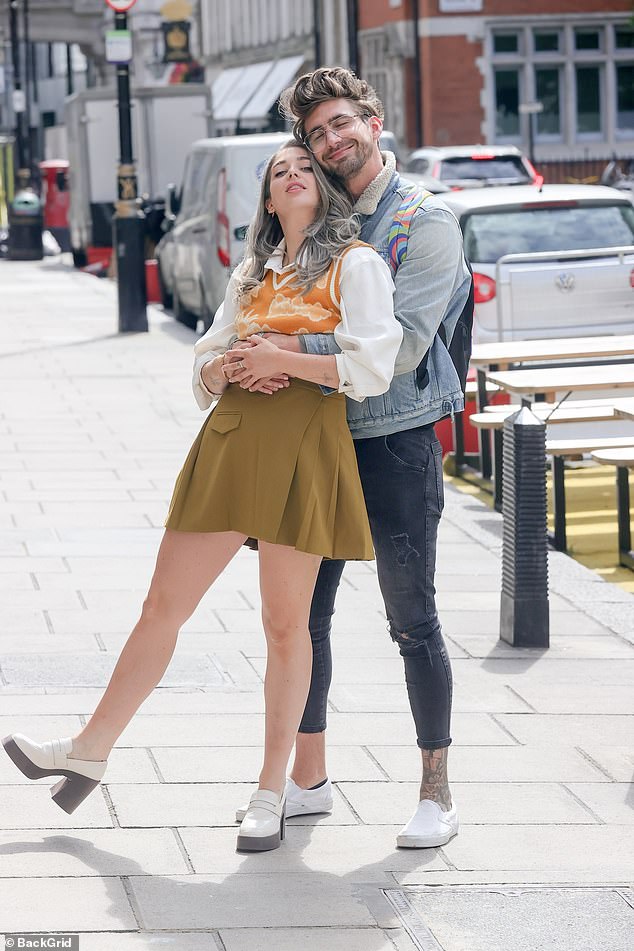