During the show’s cold open, Kate McKinnon resumed her role as America’s top infectious disease expert, Dr Anthony Fauci, as the comedy show went on to examine a series of scenarios in which people may still be required to wear face masks.

‘It’s your boy, Fauci, the patron saint of Purell. As you probably heard, we got some very good news this week. The CDC announced that people that are vaccinated no longer need to wear masks, outdoors or indoors. Pretty great, right?,’ McKinnon’s Fauci began. 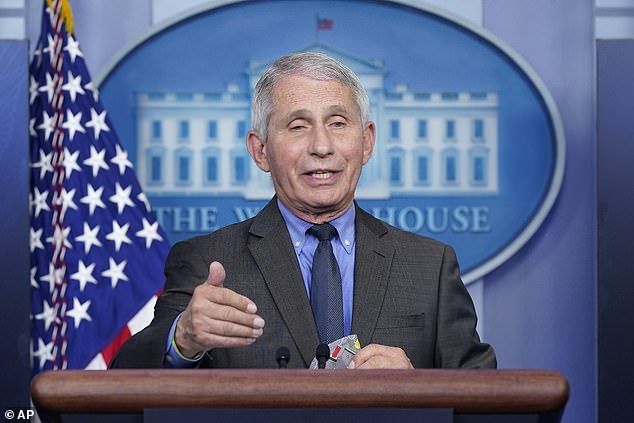 McKinnon has played Dr. Anthony Fauci, director of the National Institute of Allergy and Infectious Diseases, pictured above, throughout the coronavirus pandemic

‘A lot of people had questions, such as, what does that mean? What the hell are you talking about? Is this a trap?’

The questions seem fair enough after Americans were given the all clear to strip off their masks following the CDC easing guidance for fully vaccinated people.

While some say they’re excited to finally ditch the face coverings for good, others admit the new found freedom may take time to get used given that it has become the ‘norm’.

In a pandemic milestone that President Joe Biden hailed as ‘a great day’, the CDC revealed on Thursday vaccinated Americans no longer need to wear masks outdoors in crowds and in most indoor settings.

Despite it being a major step towards returning to pre-pandemic life, a handful of Democratic Governors, including New York’s Andrew Cuomo, said they would ignore the CDC guidance until fully reviewing it.

Some big businesses, including Starbucks and Home Depot, have already said they’ll keep mask policies in place for now. Others – like CVS, Walgreens and Macy’s – are now reviewing their requirements in light of the new guidance.

But businesses who choose to lift the rule ordering customers to wear masks can only do so in states which have also lifted the mandates, sparking further confusion among Americans. 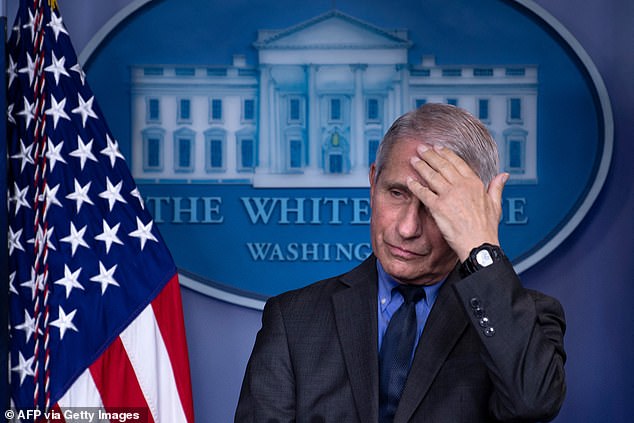 In 13 other states such as Colorado, Connecticut, Illinois, Kansas, Kentucky, Michigan, Minnesota, Nevada, Oregon, Pennsylvania, Vermont, Washington and West Virginia, governors said that in accordance with the new CDC guidelines, they will be dropping mask-wearing orders.

The remaining states either had either already lifted mask orders, or never had them to begin with. 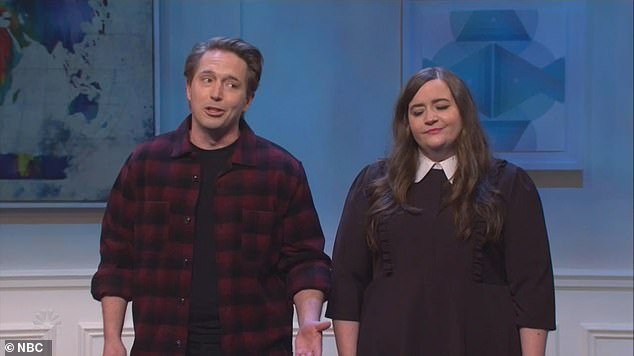 The first scenario saw Beck Bennett and Aidy Bryant examining the instance of a man walking into a bar. Does he need to wear a mask?

The complexity of the rules saw McKinnon’s Dr. Fauci parade a series of CDC doctors played by the entire SNL cast with them all acting out ‘correct mask behavior’ in various scenarios.

The first scene saw Beck Bennett and Aidy Bryant examining the scenario of a man walking into a bar.

‘Do I still have to wear a mask indoors?’ he asked.

‘You actually do not,’ she replied. Bennett removed his mask before Bryant added, ‘as long as you’re vaccinated.’

‘Well, I’m entering a bar at 11am, did you really think I was vaxxed? Because that’s on you,’ Bennett followed up.

McKinnon’s Dr. Fauci stated that although it wasn’t the key message, ‘the real point is, we have to trust each other.’

In the following scene entitled, ‘The Friendly Skies,’ Bowen Yang played an airline passenger while Ego Nwodim was his flight attendant.

Yang had his mask stuck around his chin. While ordering a drink Nwodim pointed out that when not drinking, he needed to keep his mask on.

Yang said that he had been stuck inside for more than a year and asked her if she wanted ‘to bang’. ‘You know I do, king,’ came the response. 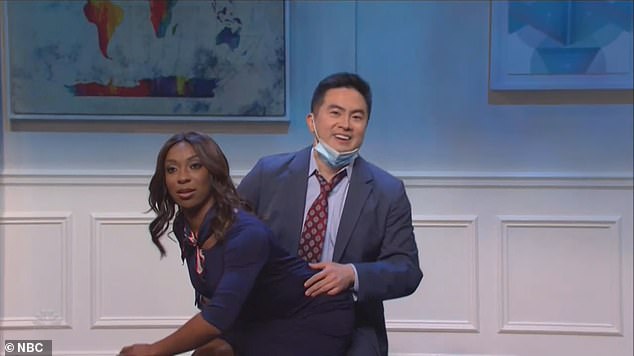 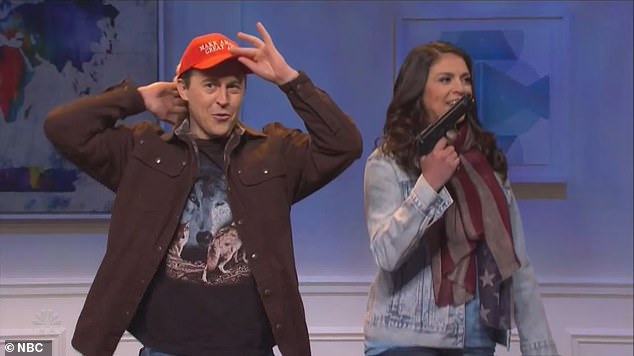 The next scene featuring Alex Moffat and Cecily Strong saw the two at a ‘pretty large gathering’ with neither wearing a mask. Moffat asked if he should be wearing a face covering.

‘We don’t have to because we’re outside — the Capitol Building,’ Strong said before pulling out a gun and Moffat with a MAGA hat in a nod to January’s US Capitol protests. ‘Now let’s get ’em!’, she said.

Fauci was lost for words, despite their advice on not needing a mask being accurate.

Lauren Holt and Punkie Johnson were next up as they acted out an essential worker scenario in which Johnson wanted to enter Holt’s store. 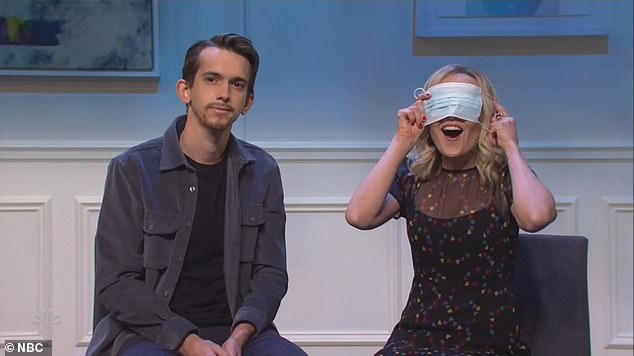 ‘Two young folks who started dating during the pandemic’ were portrayed by Andrew Dismukes and Chloe Fineman. Fineman placed her mask over her head after taking a dislike to Dismukes goatee

McKinnon’s Dr. Fauci was left confused once again. ‘Being an ally is great but it’s got nothing to do with mask safety.’

‘Two young folks who started dating during the pandemic’ were portrayed by Andrew Dismukes and Chloe Fineman.

The pair were depicted eating outdoors at a restaurant and noted they were allowed to remove their masks.

When Dismukes took off his mask, he was seen to have a goatee. Fineman joked she did ‘not like the bottom of his face’, having never seen it during the pandemic.

He suggested that she put the mask over her eyes.

The issue of public transit was then addressed with Melissa Villaseñor noting masks would still be required on buses, subways and ferries. 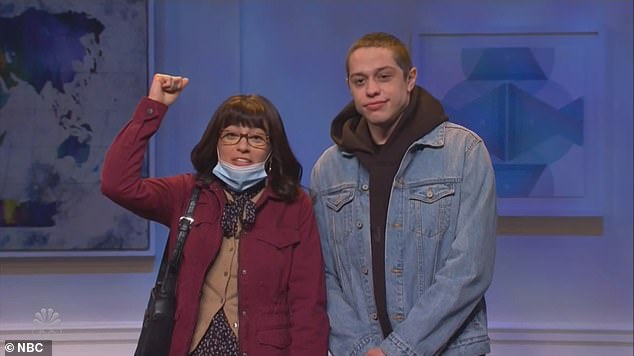 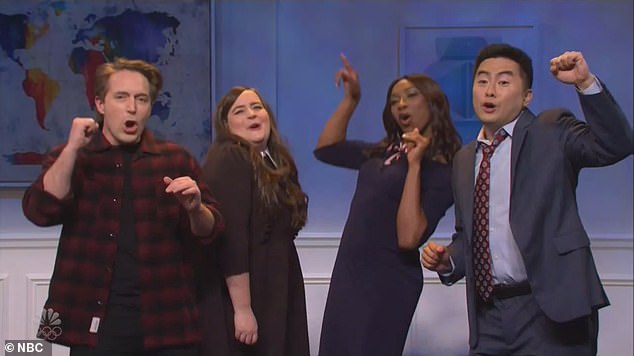 The final section of the show’s cold open saw cast members dancing, discussing how ‘everybody got the vaccine so we never need masks again’

In a mask riddle, cast members Kyle Mooney, Kenan Thompson, Heidi Gardner and Mikey Day played four friends who were only half-vaccinated ‘traveling by train from Florida to the UK with one of them old and another a baby.’

‘How many masks should we wear and in what order?’ came the question. Dr. Fauci described it as a riddle.

The final section of the sketch saw cast members dancing, discussing how ‘everybody got the vaccine so we never need masks again’ with the question as to what could be done with all the masks purchased over the last year.

The conversation was about to shift to the situation in Israel before McKinnon’s Dr. Fauci stepped in once more and simply told everyone to get the vaccine and ‘enjoy life with no masks.’ 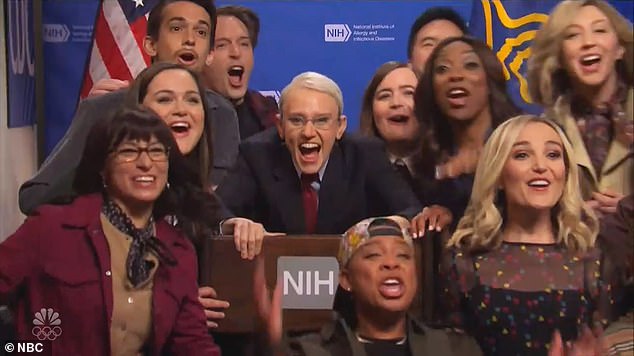 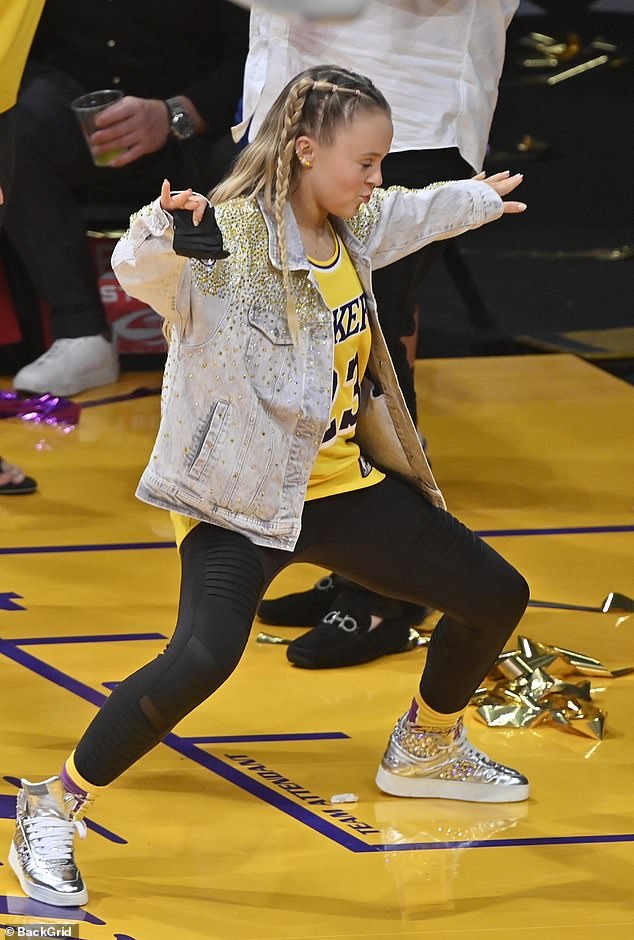 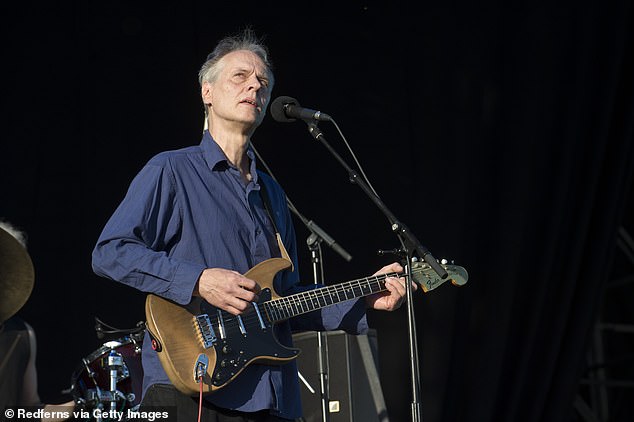 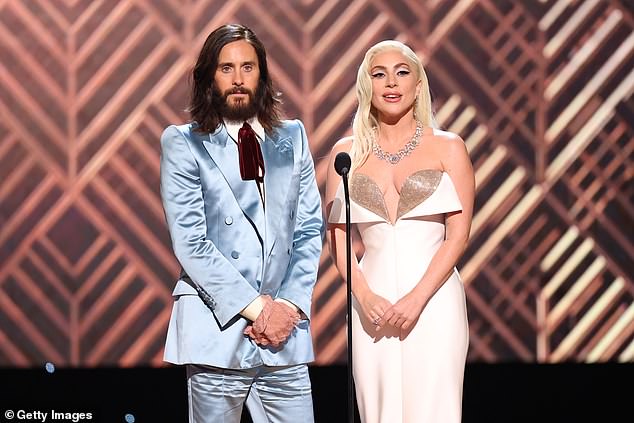