A woman claiming to be a reporter stood up at a press conference to tell Kamala Harris she voted for her – with the simpering journalist’s supposed boss since labeling her an impostor.

The woman was one of only five people who Symone Sanders, Harris’ press secretary, called on for questions.

Sanders told DailyMail.com on Tuesday night that they were looking into the incident.

Sanders, earlier on Tuesday, told Harris that the next question would come from ‘Maria Fernanda, from Univision.’

The woman stood up and said: ‘Thank you Madame Vice President.

‘For me it’s an honor because I actually got to vote for the first time as a naturalized citizen. And I voted for you.’

Kamala Harris was in Mexico City on Tuesday, where she was questioned by a woman who was introduced as a Univision reporter. Univision said they have no idea who she was

She then asked a question about women on both sides of the border.

‘What will you do for them in the coming years?’

The question was criticized for its fawning tone – but Univision then issued a statement confirming that the woman ‘Maria Fernanda’ was nothing to do with them.

‘In Mexico an individual which has no association with @Univision claimed to be a reporter for @UniNoticias in order to ask the @VP a question and to compliment,’ said Daniel Coronell, Univision’s president of news.

‘Let it be clear to everyone that Ms. Maria Fernanda Reyes is not part of this media organization.’

Univision does employ a Maria Fernanda Lopez, but she is based in Miami, and her social media showed her to be in Florida, not Mexico, on Tuesday. There did not seem to be a Maria Fernanda Reyes working at the company.

Jose Zamora, Senior Vice President for Univision News, told DailyMail.com that Univision’s real correspondent in Mexico City, Jesica Zermeño, was in the room at the time.

‘The person has no relationship with Univision,’ Zamora told DailyMail.com.

‘No idea who she is. And correct, our Mexico correspondent Jesica Zermeño was there.’ 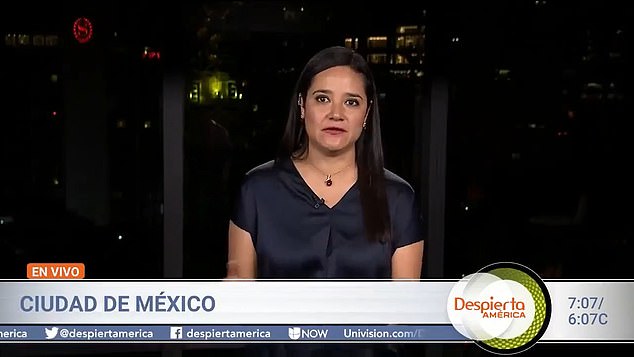 Jesica Zermeño, the real correspondent for Univision in Mexico City, was in the room at the time that ‘Maria Fernanda for Univision’ was called on to ask a question

Zermeño did not reply when asked whether she confronted the imposter.

Sanders tweeted, in response to Coronell’s clarification: ‘Thank you for bringing this to our attention. We are looking into this.’

Security at press conferences involving the president and vice president is usually high, with multiple layers of accreditation required.

Serious questions will be asked as to how the woman managed to get in.

Some said the incident drew parallels with a December 2008 press conference in Baghdad, when an Iraqi journalist, Muntadhar al-Zaidi threw his shoes at then-U.S. President George W. Bush.

Al-Zaidi shouted at the outgoing president: ‘This is a farewell kiss from the Iraqi people, you dog.’

He served nine months in prison, and now works for a Lebanese television station.

Harris was in Mexico City on Tuesday to meet with Andres Manuel Lopez Obrador, Mexico’s president.

She hit back at questions about when she would visit the southern border on Tuesday, saying it was ‘short-sighted’ to focus on the symptoms and not the root causes of the migrant crisis as she wrapped up her visit to Guatemala and Mexico.

She was dogged throughout her trip about with questions about when she would go to the border with Mexico to see for herself the scale of the problem. And she let her frustrations show.

At a news conference in Mexico City she shrugged off the idea. 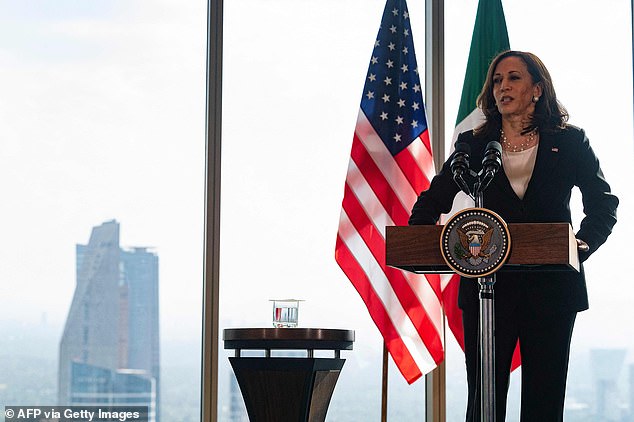 Vice President wrapped up her two-day trip to Guatemala and Mexico with a news conference at a Mexico City hotel. Questions about when she would visit the southern border dogged her during the trip but she responded by saying it was ‘short-sighted’ to focus on the ‘reaction’ and not the ’cause’ of a problem 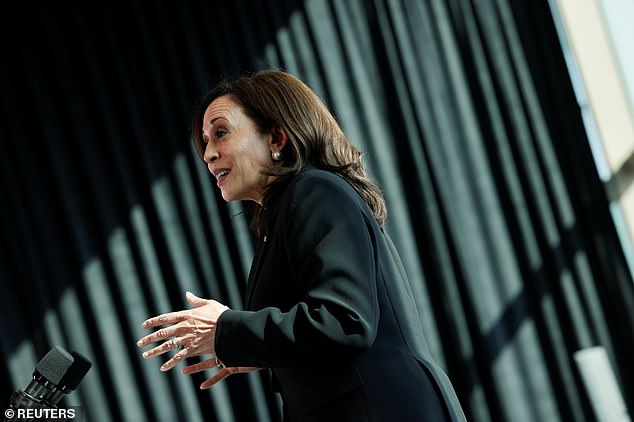 Speaking to reporters in Mexico City, Harris said: ‘I also believe that if you want to fix a problem. You have to go to where the problem exists. She was due to return to Washington D.C. on Tuesday evening 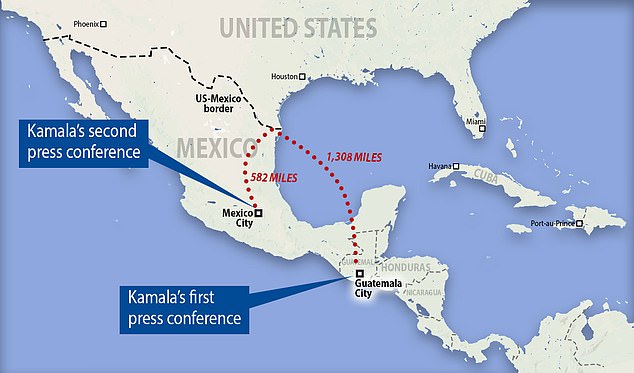 Harris’ first international trip included stops in Guatemala and Mexico, 1,308 and 582 miles away respectively from the Rio Grande, where families risk their lives ever day trying to cross into the U.S.

Conservatives have sought to saddle Harris with problems at the border ever since President Joe Biden asked her to take the lead in diplomatic efforts to stem the flow of migrants.

They have dubbed her the ‘border czar,’ criticized her for not holding a press conference on the issue and demanding that she visit the Mexico-U.S. frontier.

For weeks she has sought to portray her job as one that was focused on addressing the root causes of migration – from violence to corruption and poverty.

She stuck to the themes during her two-day trip as she spelled out her approach.

‘I also believe that if you want to fix a problem. You have to go to where the problem exists,’ she said in Mexico City, some 500 miles from the border.

‘If you want to address the needs of a people, you must meet those people. You must spend time with those people.’

And she said, as a politician from California, she was well aware of the issues at the border.

Earlier she snapped at reporters for allowing the border crisis to overshadow her first international trip.

‘Why not go to the border, as well, so you do see the full complexity?’ a reporter asked Harris as she took some questions following a bilateral meeting with Lopez Obrador.

‘Listen, I’ve been to the border before and I’ll go again,’ she said with an awkward laugh.

‘But when I’m in Guatemala, dealing with root causes, I think we should have a conversation about what’s going on in Guatemala,’ she said – even though she is in Mexico.

Harris held bilateral talks with Lopez Obrador during her trip to Mexico on Tuesday. The duo discussed stopping mass immigration from Central America by way of migrating through Mexico.

The vice president said the ‘bottom line’ was that the administration had to apply ‘equal weight’ to what’s going on at the border and ‘root causes’ in Northern Triangle nations.

Republicans argue, however, that there is not equal attention since she nor President Joe Biden have gone to the southern border to see the humanitarian crisis first hand. 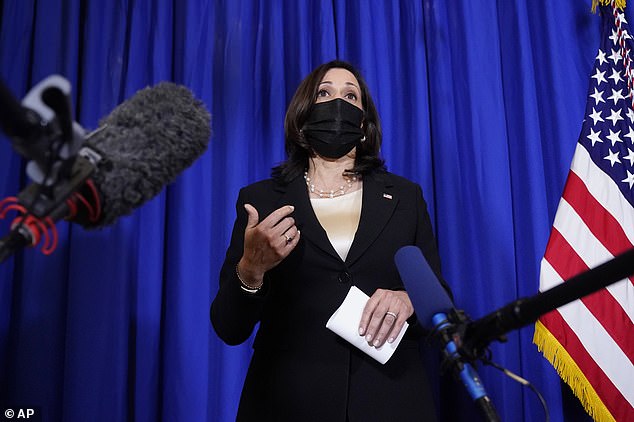 Vice President Kamala Harris lashed out when reporters again brought up the southern border during her trip to Mexico on Tuesday. ‘Listen, I’ve been to the border before and I’ll go again. But when I’m in Guatemala, dealing with root causes, I think we should have a conversation about what’s going on in Guatemala,’ she said with a laugh– even though she is in Mexico 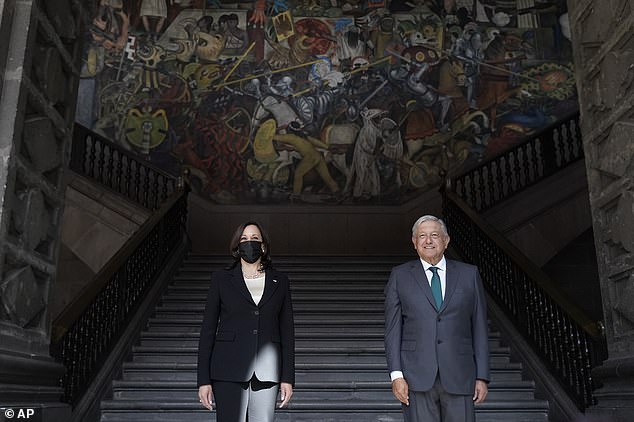 Kamala Harris and Mexican President Andres Manuel Lopez Obrador had a bilateral meeting in Mexico City on Tuesday as the vice president still refuses to visit the southern border but says the U.S. is ’embarking on a new era’ of relations

Harris, however, is visiting Guatemala and Mexico to see for herself what sort of ‘root causes’ the U.S. can help address there.

Ahead of her bilateral meeting with Lopez Obrador, Harris said the U.S. and Mexico are ’embarking on a new era’.

When asked if Lopez Obrador would commit to increasing border security in Mexico, he said: ‘We are very pleased to have her here and we will touch on that subject but always addressing the fundamental root causes.’ 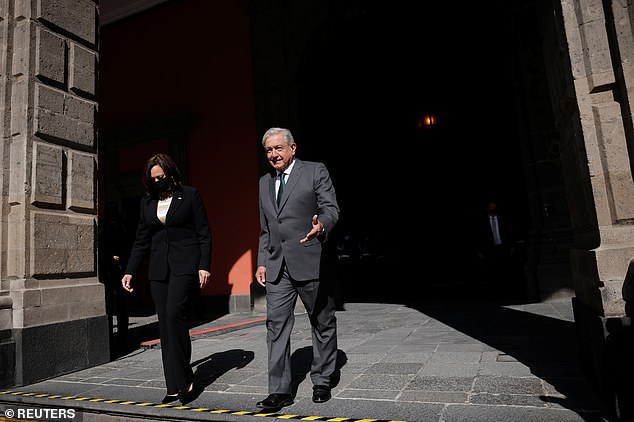 Although both Harris and Lopez Obrador are vaccinated, the vice president masked up for the meeting 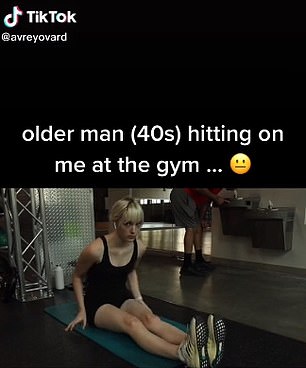 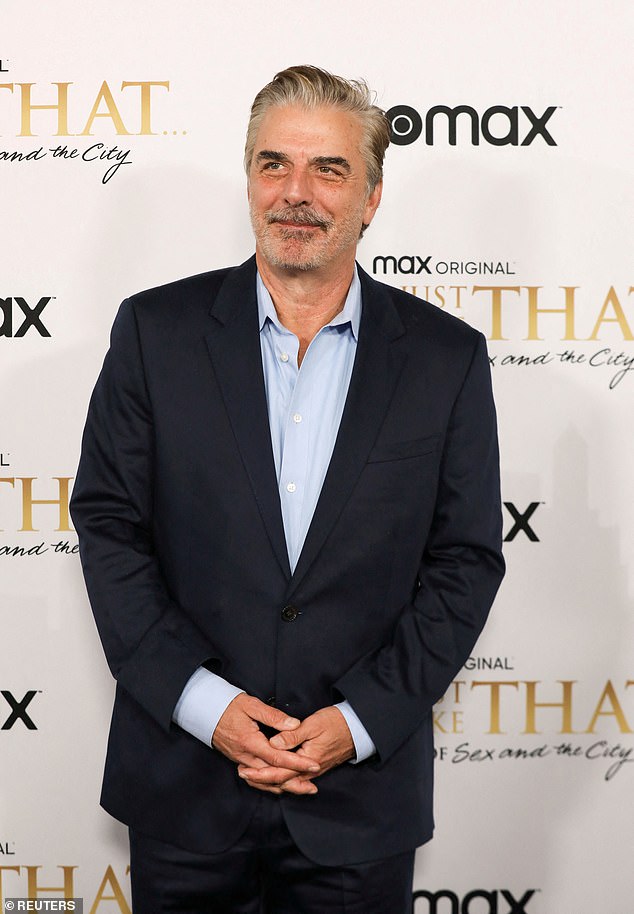 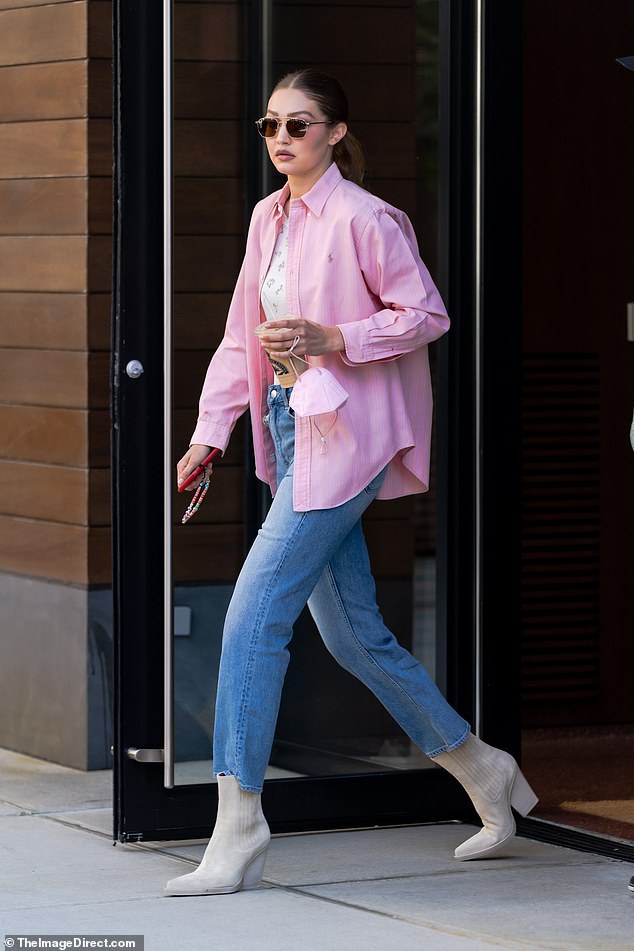 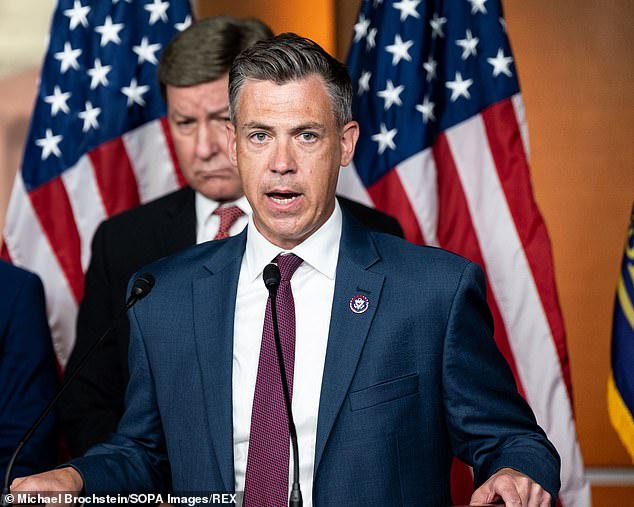 New Mexico woman, 18, is arrested in connection to the killing of former corrections officer
57 mins ago