Two men brazenly walked out of a Lowe’s store pushing a shopping cart filled with electrical goods before loading it into a waiting getaway car and helpless store workers looked on in the latest incident of ‘legalized stealing’ in Democratic states.

The pair picked products like spools of wire valued at $2,000 – presumably to strip it for the valuable copper inside – from a Lowe’s in Keizer, a suburb of Salem, on August 25.

Keizer Police confirmed to DailyMail.com that they were investigating the incident, but no arrests have been made and the men have not been publicly identified.

‘Second thing is, these people know they can’t go to jail.’

Store employees are generally instructed not to confront shoplifters, who have grown more brazen as videos from cities like San Francisco and Los Angeles show shoplifters stripping stores of hundreds, sometimes thousands, of dollars.

Two men walked out with thousands of dollars of merchandise from a Lowe’s in Keizer, Oregon 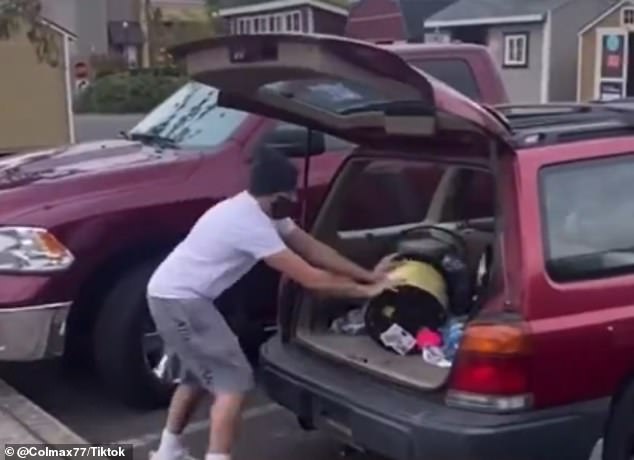 The men loaded up a red Subaru on August 25 with spools of wire, which they will likely sell for the valuable copper inside, according to police and the electrician who filmed the video 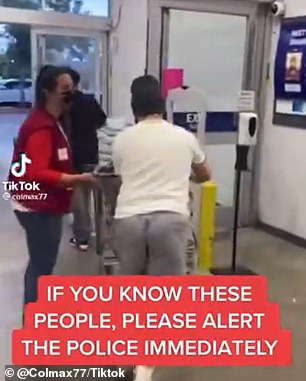 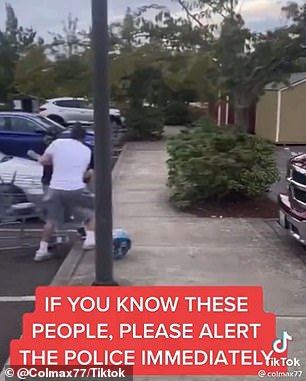 In the video from Oregon, an employee asks the men for a receipt as they walk out of the store. One of the men points to the side in an attempt to distract her and says, ‘Right there,’ as he walks past her.

The employee then stops a colleague from chasing after them and says, ‘Not worth it,’ as the men walk past the vestibule and into the store parking lot.

Jails in Portland, about 43 miles north of Keizer, stopped taking in new inmates in March 2020 due to fears from the coronavirus.

‘We have reduced the folks we are taking to jail,’ Police Chief Jami Resch told Willamette Week. ‘We are taking felonies and mandatory arrests to jail.’

The city has had its own surge in crime after violent protests broke out last year in the aftermath of the police murders of George Floyd and Breonna Taylor.

In San Francisco, an Instagram video from July shows at least 10 people taking armfuls of designer goods from a Neiman Marcus and fleeing without anyone trying to stop them. 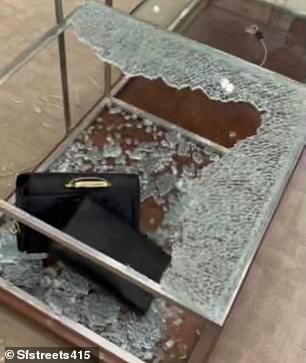 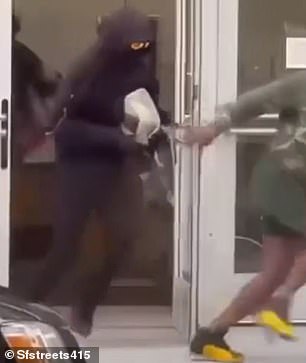 One person watching says, ‘They can’t do anything,’ perhaps referring to security at Neiman Marcus.

That same month, San Francisco District Attorney Chesa Boudin appeared to defend a man who was filmed stealing a garbage bag full of items from Walgreens in June.

‘When I watch that video, I think about five questions that people are not asking that I think they should,’ Boudin told The New Yorker.

‘Is he drug addicted, mentally ill, desperate? Is he part of a major retail fencing operation?

‘What’s driving this behavior and is it in any way representative, because it was presented as something symptomatic?’

Larceny, which includes various forms of theft, is considerably high in Oregon compared to the national average, according to the the latest data available from the FBI 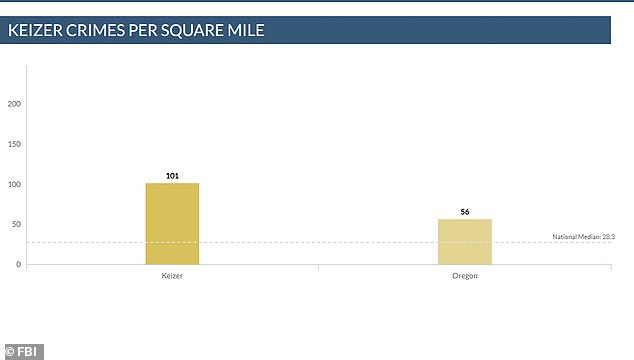 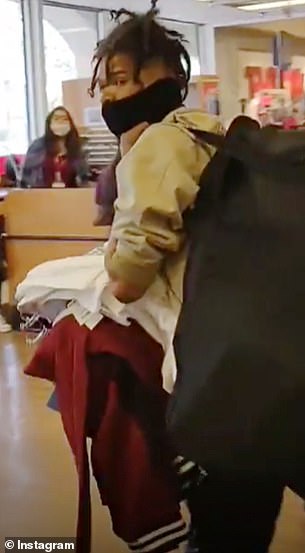 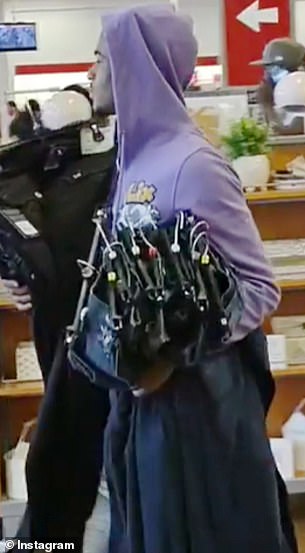 A viral video from July showed two men carrying armfuls of jeans, jackets and other apparel as they casually saunter out of a TJ Maxx in the Granada Hills section of the San Fernando Valley north of Los Angeles.

‘And so, that’s sending a message that…the criminals, are winning.’

The man filming the Oregon incident called it, ‘Funny and disturbing at the same time,’ as he records them loading up a red Subaru with the stolen goods with the help of a third man.

‘It was so blatant, that’s what riled me up,’ said Andrew Sullivan, an electrician who lives in Keizer and filmed who filmed the incident, in an interview with the Keizer Times.

‘They were just strolling through the parking lot, just riding the carts. 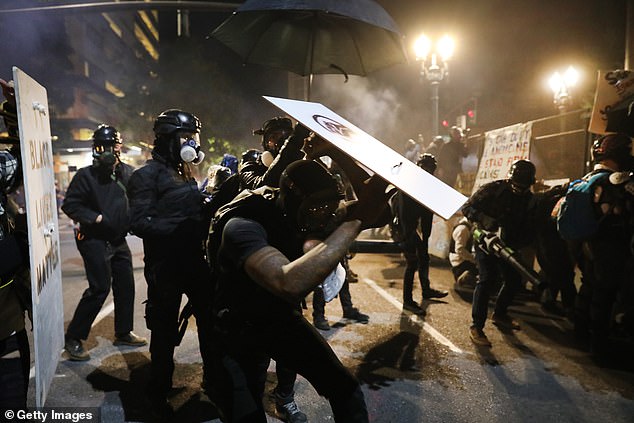 ‘I think these guys have done it before because they seemed to have a good system. One guy with the car and two guys with the carts. They knew no one was going to touch them,’ he added.

Oregon’s rate of larceny, which covers various forms of theft, is more than 2,000 per 100,000 people – a third higher than the national average of slightly above 1,500, according to the latest available data from the Federal Bureau of Investigation.

The city of Keizer, which covers an area of less than eight square miles, had a crime rate of 101 incidents per square mile in 2019, almost double that of Oregon’s and more than three times the national average, according to FBI data compiled by Neighborhood Scout.

Theft of more than $1,000 is a Class C Felony in Oregon punishable by up to 5 years in prison, according to Oregon’s statute.

‘Organized retail theft,’ in which two or more people take over $5,000 worth of products from a store in a 90-day period, is a Class B Felony punishable by up to 10 years.

A recent study by safehome.org found that Oregon is the eighth worst in the nation for property crime, which includes burglary, vehicle theft and arson, according to KATU. 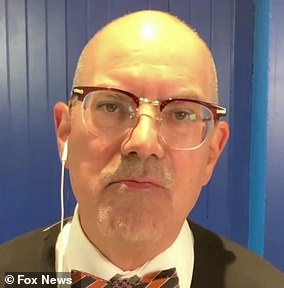 Richie Greenberg, a former Republican candidate for mayor of San Francisco, says the city is run by ‘left-wing ideologues’ whose calls to defund the police are responsible for low morale among cops and whose policies are to blame for the rise in crime

A former Republican candidate for mayor of San Francisco says the city is run by ‘left-wing ideologues’ whose calls to defund the police are responsible for low morale among cops and whose policies are to blame for the rise in crime.

Richie Greenberg made the comments just a day after video emerged on social media showing shoplifters brazenly making off with stolen goods after ransacking a local Neiman Marcus store.

Crime statistics indicate an increase in burglaries this year compared to 2020, with critics blasting the progressive district attorney, Chesa Boudin, for being too lax in meting out punishments to offenders.

‘I called this years ago and we see this is now coming to fruition,’ Greenberg told Fox News on Wednesday. 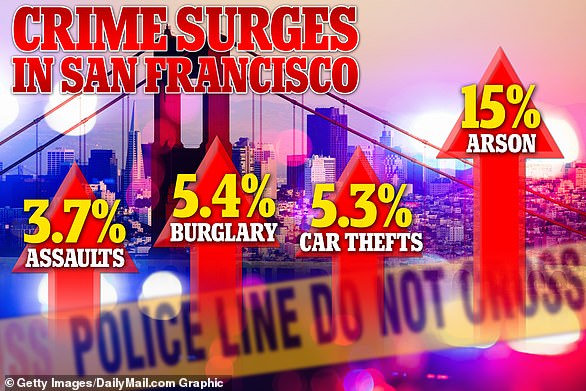 Greenberg says there is a ‘drop in morale’ among the police officers, which he attributes to a November ballot measure that ended a requirement that there be a specified number of cops assigned to patrol certain neighborhoods.

Before Proposition E was adopted, San Francisco law required that at least 1,971 full-duty officers be staffed at the police department.

Prop E now requires the police to submit a staffing report and recommendation every two years to the Police Commission, a body whose members are appointed by the mayor and the city Board of Supervisors.

Greenberg says that the problem is the city does not have enough ideological diversity.

‘This is a far left-wing governed city,’ he said.

‘There’s virtually no conservative, even centrist candidates that really win, especially on the city council and our board of Supervisors.

‘This city is controlled completely by left-wing ideologues.’

He added: ‘There’s not enough police – part of the whole defunding police movement.’

In July, video was posted to Instagram capturing yet another brazen act of shoplifting in San Francisco.

At least 10 people are seen in the video with armfuls of designer goods and then fleeing the luxury department store Neiman Marcus – without anyone trying to stop them.

The footage reveals the shoplifters leaving the Union Square store, each carrying bags of stolen items with the security tags still dangling off of them.

The perpetrators then ran in different directions, with a few speeding away from the scene in a white sedan.

One person watching says, ‘They can’t do anything,’ perhaps referring to security at Neiman Marcus.

Shoplifting cases are all too common in San Francisco, where charges of property theft less than $950 in value was downgraded from a felony to a misdemeanor in 2014 – meaning that store staff and security do not pursue or stop thieves who have taken anything worth less than $1,000. 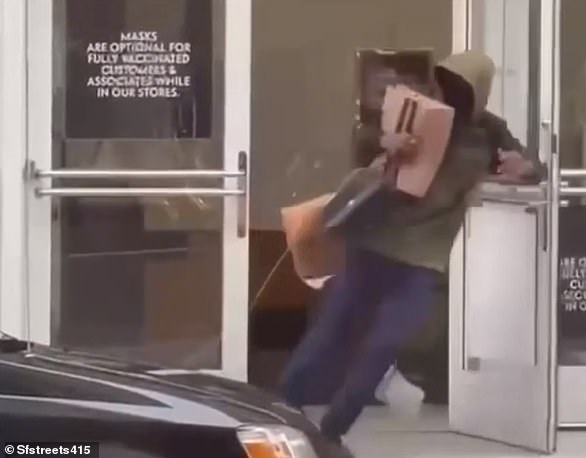 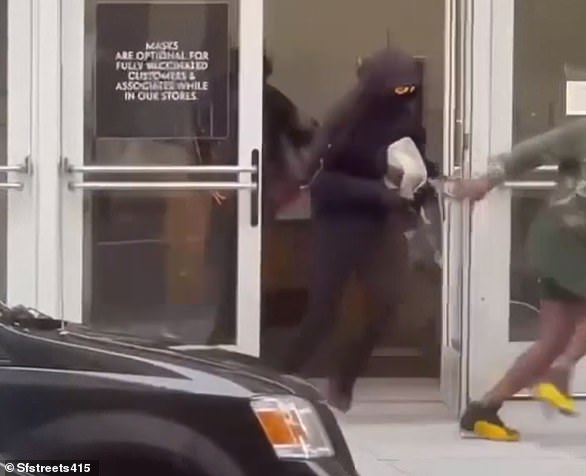 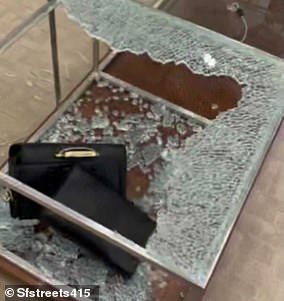 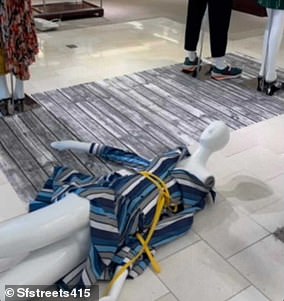 The person who posted the video wrote a message demanding San Francisco crackdown on shoplifters and called for District Attorney of San Francisco Chesa Boudin to be removed from office.

‘Everyone in the city is tired of this so please sign the recall petition to oust Chesa Boudin now! Crime is legal basically and allowed and tolerated due to policies put in place and supported by all our supervisors and mayor and DA,’ Instagram user sfstreets415, whose bio reads, ‘Asian photographer and crime reporter,’ wrote.

The petition was first launched in March to recall Boudin, who has come under fire in recent years, along with the city’s leadership, for allegedly not doing enough to combat San Francisco’s shoplifting problem.

The city’s surge in such incidents arose almost immediately after the passage of Proposition 47, a ballot referendum known as the Safe Neighborhoods and Schools Act that downgraded the theft of property less than $950 in value from a felony charge to a misdemeanor. 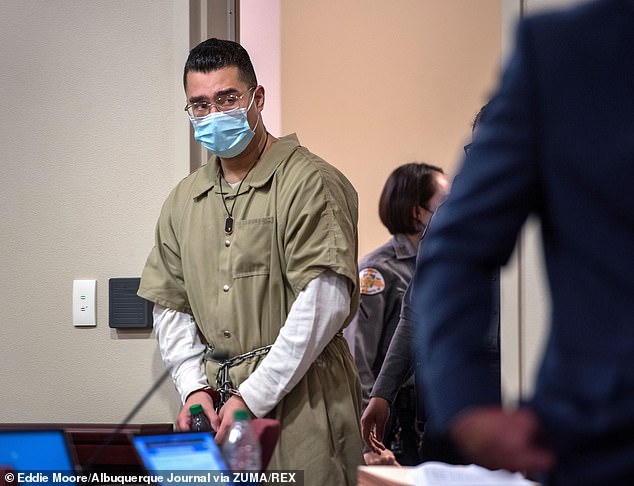 PICTURED:Dog crate and hammer used by family to torture 13-year-old boy to death 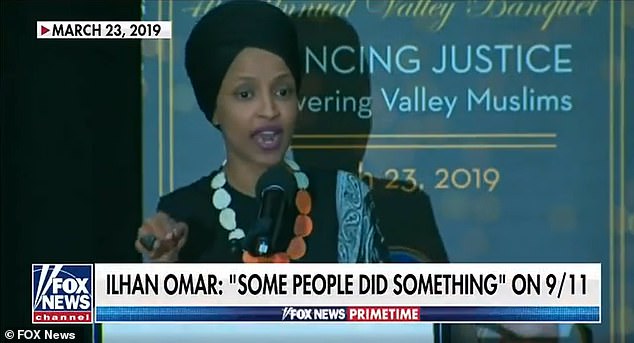 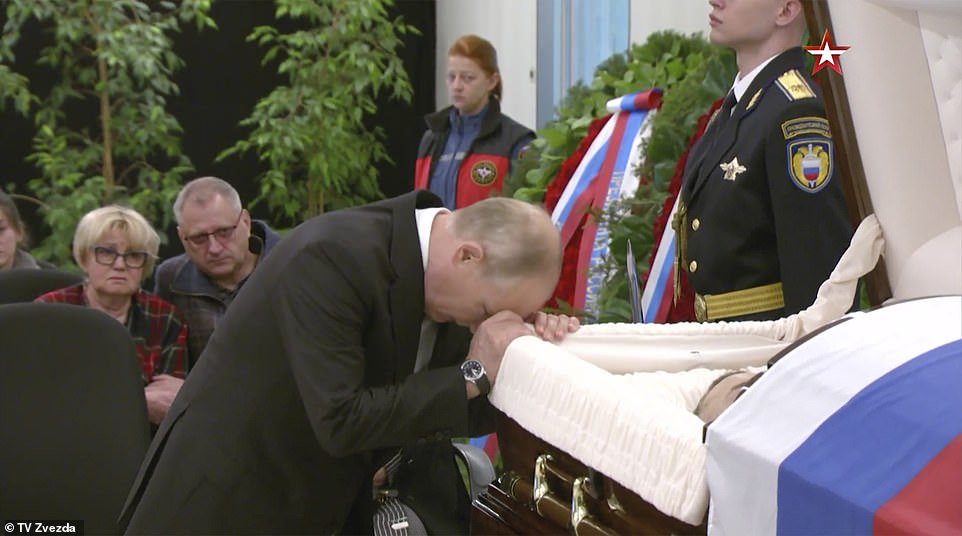