Russia claimed one of its warships on Friday forced a U.S. Navy destroyer to abandon what it said was an attempt to intrude into its territorial waters in the Sea of Japan.

Video released by the Russian ministry of defense appears to show the moment its anti-submarine vessel Admiral Tributs closed to within 60 yards of the U.S. destroyer USS Chafee in Peter the Great Gulf, to the south of Vladivostok.

But the account was disputed by U.S. officials who said the interaction was ‘safe and professional,’ according to Fox News.

The incident came while Russia and China conducted joint naval drills in the area, and is the latest in a series of close encounters between Russian and Western warships.

Relations between Russia and the U.S. are at their lowest point since the Cold War.

The Russian defence ministry said the Admiral Tributs radioed a warning to the USS Chafee to say she was ‘in an area closed to navigation due to exercises with artillery fire.’

Pictured in this video screen grab is the guided missile destroyer USS Chafee (DDG 90), which has been deployed in the Sea of Japan, near Russia’s territorial waters, for a few days 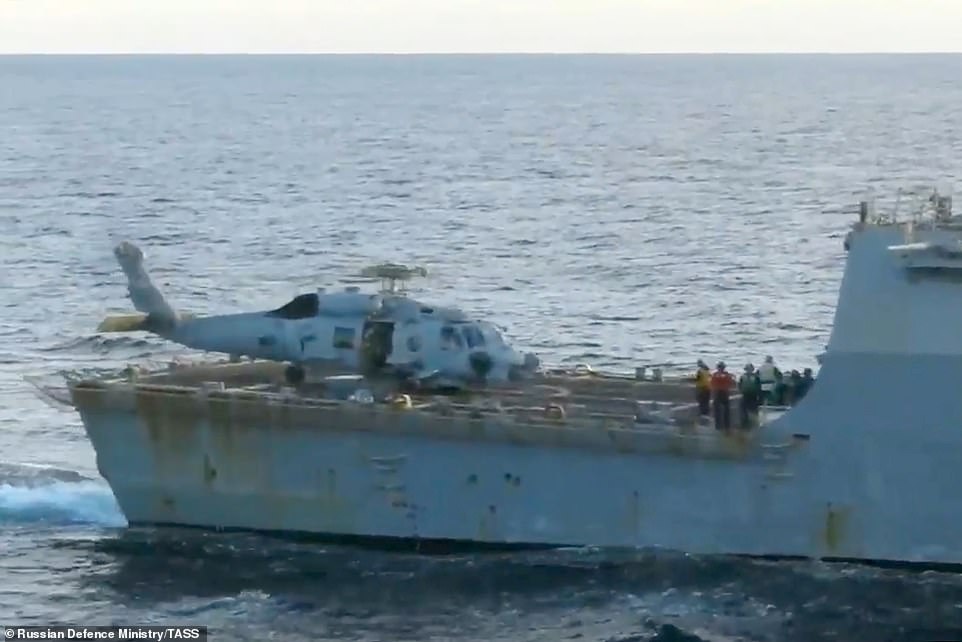 The USS Chafee responded to requests to change course by raising flags indicating it was about to launch a helicopter, according to the Russian defense ministry 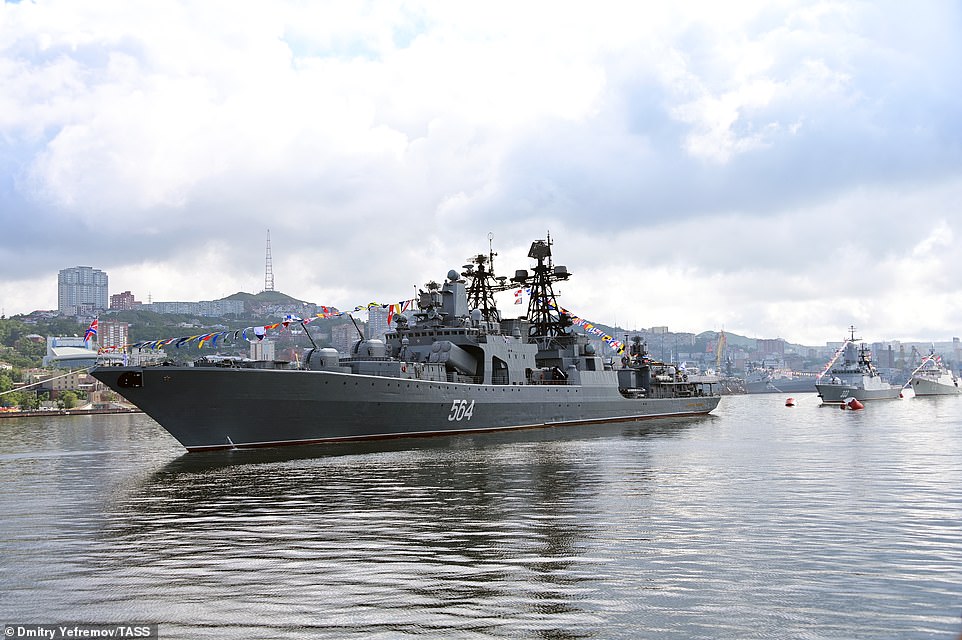 The Russian destroyer Admiral Tributs pictured in Zolotoy Rog, or the Golden Horn Bay, during a parade in the Sea of Japan 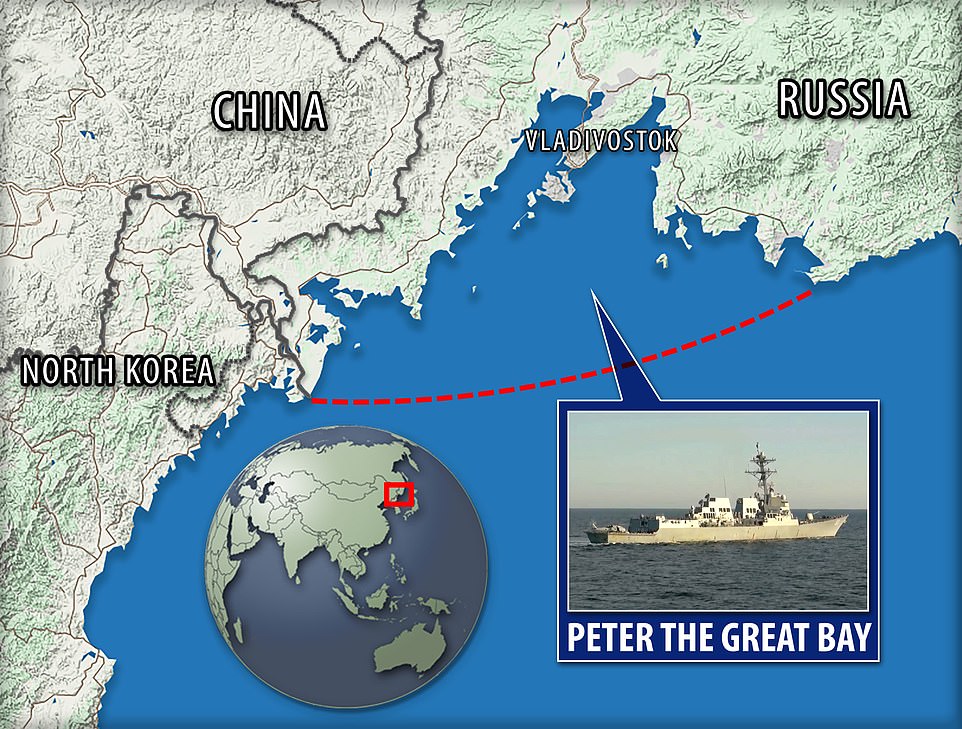 ‘Acting within the framework of the international rules of navigation, the Admiral Tributs set a course for ousting the intruder from Russian territorial waters,’ it said.

USS Chafee changed course when the two ships were less than 65 yards apart.

It said the episode lasted less than 50 minutes and denounced what it said was U.S. ‘crude violation’ of rules on averting ships collisions.

The Pentagon referred a request for comment to the U.S. Navy which did not immediately respond.

The attache was told about ‘unprofessional actions’ of the crew of the destroyer Chafee, said the report.

It was the second time in four months Russia has said it chased a NATO-member warship from its waters.

In June, Russia accused a British destroyer, the Defender, of breaching its territorial waters in the Black Sea, and said it had forced the ship away with warning shots and dropped bombs in its path.

Britain rejected Moscow’s account of the incident, which took place off Crimea, part of Ukraine which Russia annexed in 2014 in a move not recognised internationally. London said at the time its ship was operating lawfully in Ukrainian waters. 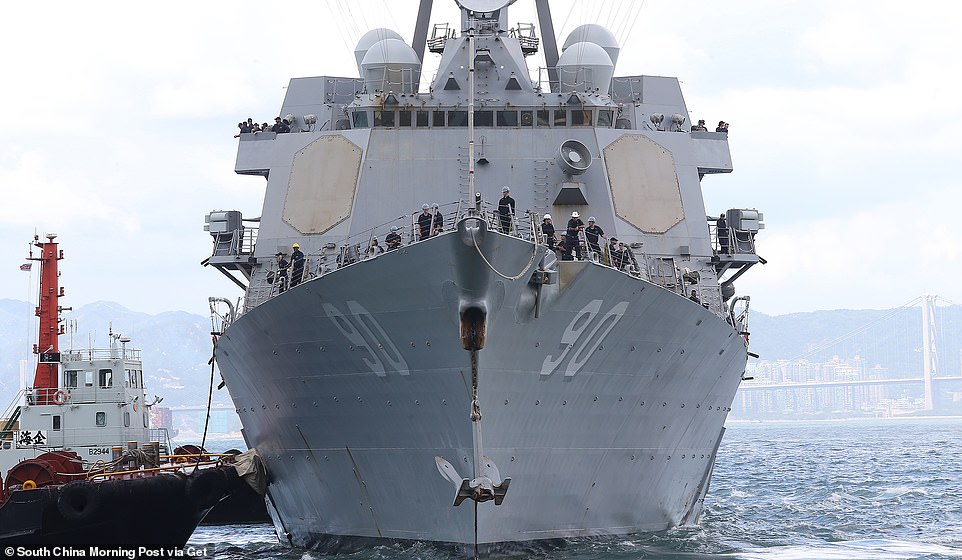 The USS Chafee pictured arriving in Hong Kong. She is an Arleigh Burke’class guided missile destroyer and is part of the Nimitz Carrier Strike Group

That triggered a warning from a senior Moscow security official that Britain should avoid any repeat.

Mikhail Popov, deputy secretary of Russia’s Security Council, said: ‘Similar actions will be thwarted with the harshest methods in future by Russia regardless of the violator’s state allegiance.

‘We suggest our opponents think hard about whether it’s worth organizing such provocations given the capabilities of Russia’s armed forces.

Earlier on Friday, Russia said it had held joint naval drills with China in the Sea of Japan and practised how to operate together and destroy floating enemy mines with artillery fire.

Relations between Russia and the U.S. are at their lowest point since the Cold War, although President Vladimir Putin said this week he had established a solid relationship with his U.S. counterpart Joe Biden and saw potential for ties to improve.

Made for Amazon, featuring The Mandalorian: The Child, Stand for Amazon Echo Dot (3rd Gen) 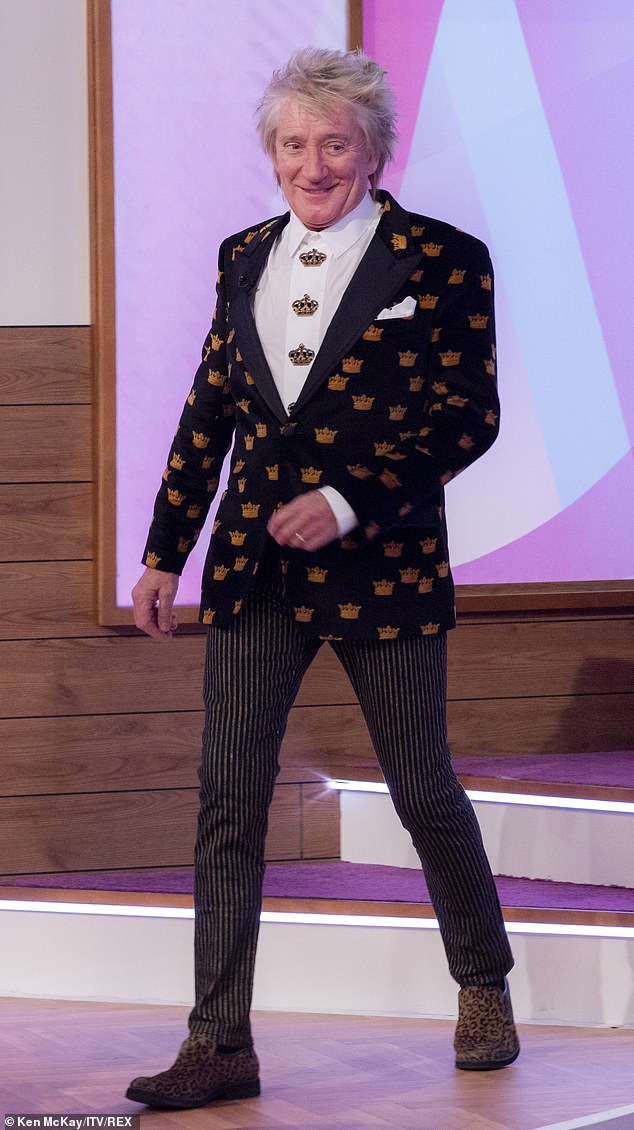 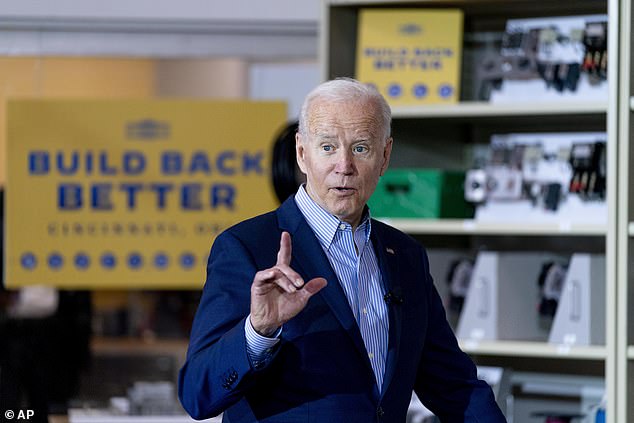 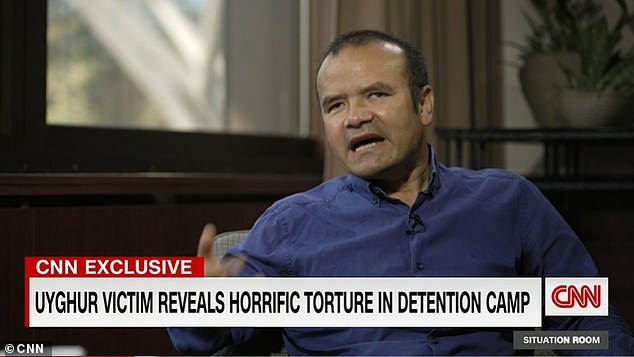 ‘They told me to bend over. I begged them to stop’: Uighur reveals guards ordered gang-rape

White House has ‘blood on their hands’, say friends of young Marine killed in Kabul bombing

August 29, 2021
Check Also
Close
Recent Stories
Featured Posts
CDC orders all airlines to turn over names of passengers who have been in 8 African countries
9 mins ago

Echo: What to Know About Marvel’s Groundbreaking Hero Before She Gets Her Own Spinoff
24 mins ago

WHO: Most Omicron cases are ‘mild’ or symptomless and existing vaccines should provide protection
39 mins ago