Republican Wisconsin Senator Ron Johnson has claimed that he did not feel at all  threatened by the mob of Trump supporters who stormed the Capitol in Washington D.C. in January but said that had it been Black Lives Matter or Antifa, he would have been ‘a little concerned’.

Johnson was speaking on conservative Joe Pags show, a portion of which is also simulcast on Newsmax TV.

During the interview he stated that he did not believe what was happening to be an armed insurrection.

Senator Ron Johnson, R-Wisconsin, has described the pro-Trump rioters who stormed the Capitol on January 6 as people who ‘truly respect law enforcement’ 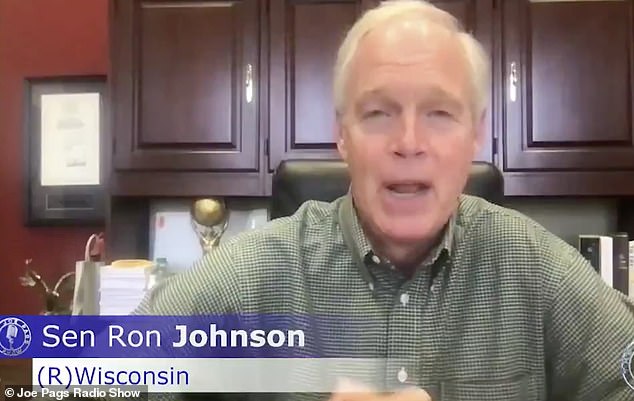 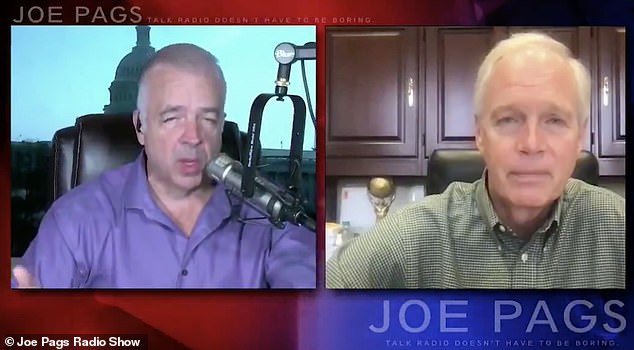 Johnson was speaking on conservative Joe Pags radio show, a portion of which is also simulcast on Newsmax TV 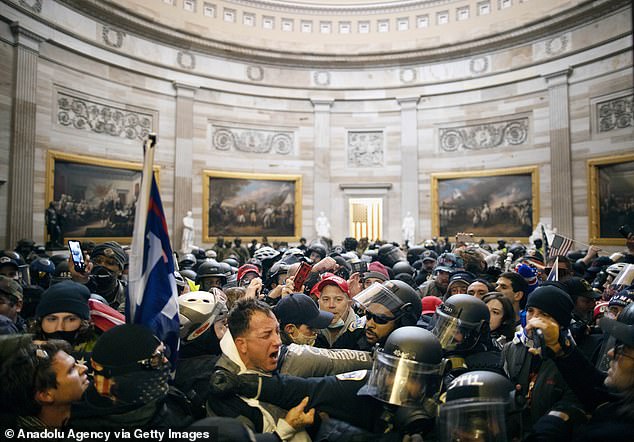 WATCH: Ron Johnson says he never “felt threatened” on 1/6 because “I knew those were people that love this country” but if “those were tens of thousands of Black Lives Matter and antifa protesters, I might have been a little concerned.” pic.twitter.com/PZcs89bl1T

Johnson has been criticized for saying he didn’t feel threatened during the time of the storming of the Capitol and Congress but during the radio interview, he doubled down on his comments.

‘Because I didn’t. Mainly because I knew, even though those thousands of people that were marching to the Capitol were trying to pressure people like me to vote the way they wanted me to vote, I knew those were people that love this country, that truly respect law enforcement, would never do anything to break a law, and so I wasn’t concerned,’ Johnson claimed.

‘Now, had the tables been turned and President Trump won the election, and those were tens of thousands of Black Lives Matter and Antifa protesters, I might have been a little concerned.’

His comments were met with fury by CNN host Don Lemon who accused the senator of ‘spewing blatant racism.’ 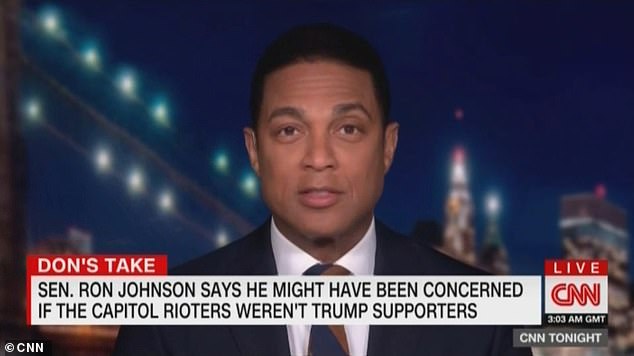 GOP Sen. Ron Johnson invoked race in explaining his sense of safety during the January 6 Capitol riot, saying that he might have been concerned for his well-being had the protesters been affiliated with Black Lives Matter instead of being a largely White pro-Trump crowd. pic.twitter.com/CeKnZX1GM4

‘Did you hear him? He wasn’t afraid of those people. Maybe ’cause they’re white? Not maybe. That’s the reason. Because if they were black, he would be afraid of them. He said they support law enforcement. Even though they beat up officers, one officer died, one suffered a heart attack, and they were beating them with blue lives matter flags,’ Lemon countered.

Lemon said that Johnson ‘knows exactly what he’s doing’ and thought it ‘too exciting to keep to himself.’

Lemon then went on to play an audio clip of protesters chanting ‘Hang Mike Pence!’ and repeated his thoughts on the senators comments.

‘He wasn’t concerned about them. But he would have been if they had been Black Lives Matter or antifa. Just keep digging deeper, senator,’ Lemon said.

The Wisconsin Republican was criticized in February after he read a statement at a hearing on Capitol security that suggested ‘agents provocateur’ kick-started the MAGA riot. 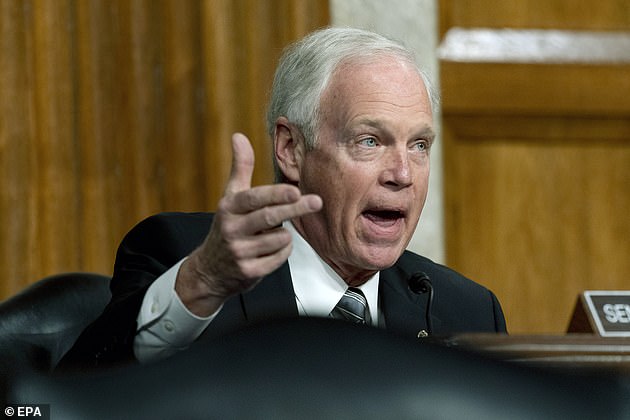 In February Johnson, a Trump loyalist, read an article that claimed Trump supporters were not to blame for the violence that left five dead, but instead ‘groups of agitators’ 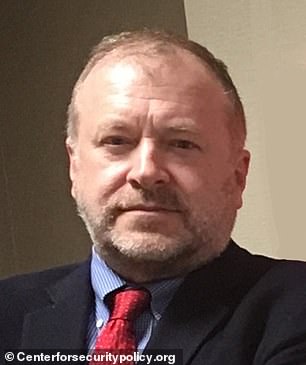 Johnson read from a piece by J. Michael Waller, an analyst for the Center for Security Policy who produced his own eyewitness account of the event claiming there were ‘agents provocateur’ behind the January 6 riot

Johnson read directly from a Federalist article. The account concluded that a small group of armed attackers ‘probably’ planned the event and led other rioters to take part.

It claimed there were ‘fake Trump protesters,’ described as ‘a few young men wearing Trump or MAGA hats backwards and who did not fit in with the rest of the crowd in terms of their actions and demeanor, whom I presumed to be Antifa or other leftist agitators.’

‘As our hearing concludes, I want to make one thing clear: ‘provocateurs’ did not storm the Capitol. They were not ‘fake Trump protestors.’ The mood on January 6th was not ‘festive.’ That is disinformation.’ 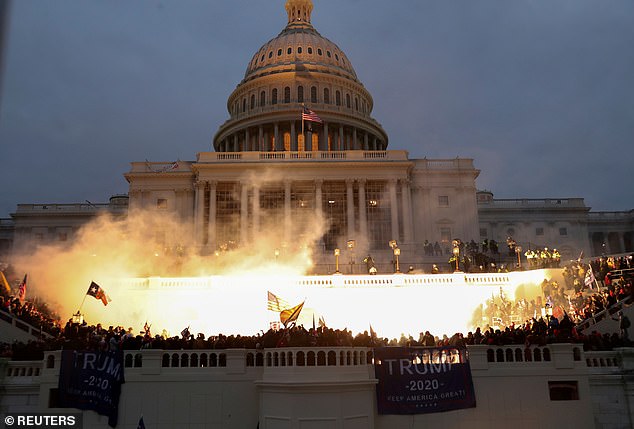 Thousands of rioters broke through barricades and forced Congress to evacuate

Law enforcement officials said in court filings last month that guns, bombs and other weapons were found on people and in the vehicles of those who stormed the Capitol.

Among the five who died during the chaos was Capitol Police Officer Brian Sicknick, who lost his life a day after the storming due to injuries sustained during the siege.

Investigators for the District of Columbia says they have identified over 540 suspects and arrested 316 to date in connection with the Capitol siege according to Insider. 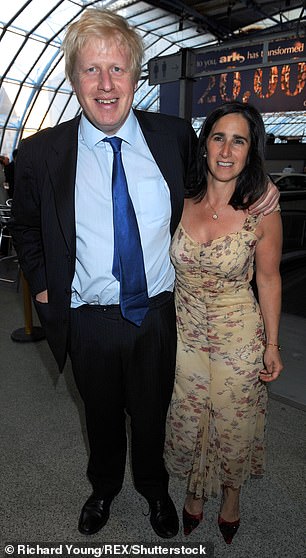 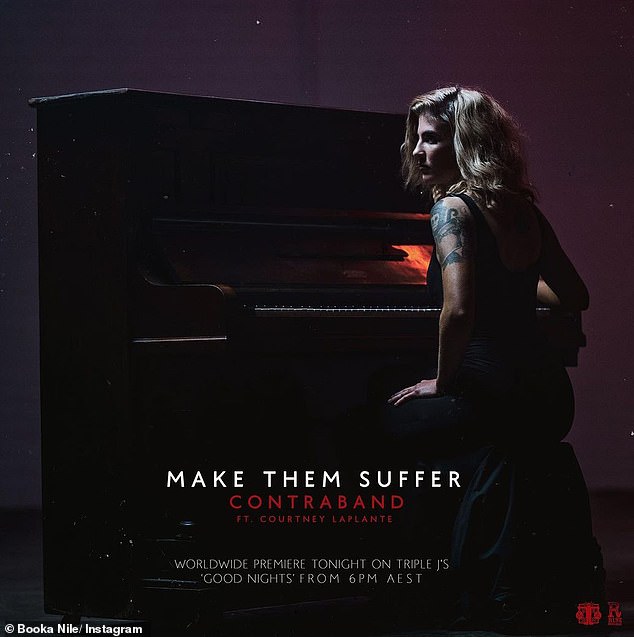 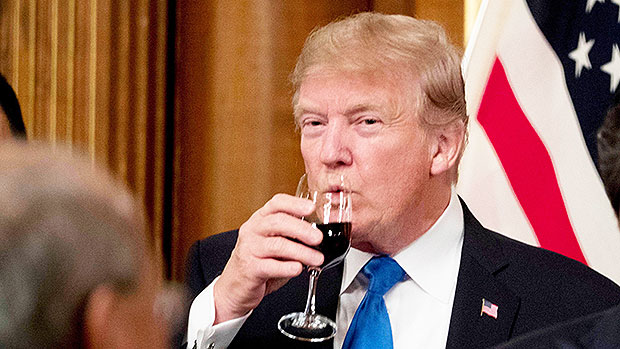 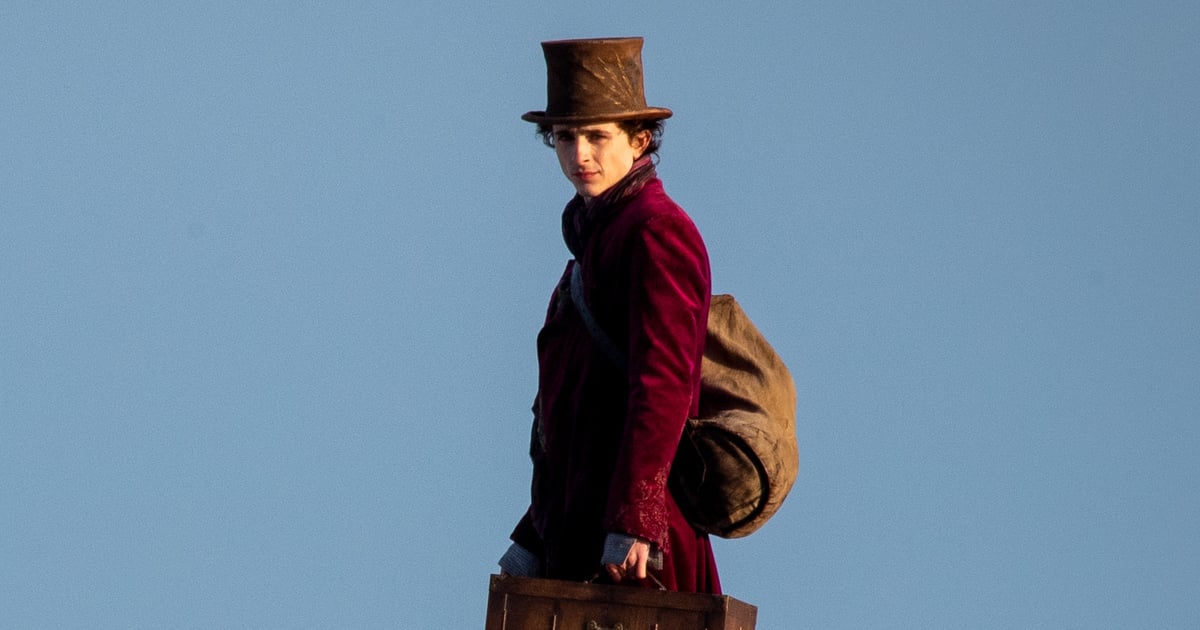