Residents of Venice Beach in Los Angeles say soaring crime rates and the exploding homeless population have made life in the elite beachside community unbearable.

A ‘catastrophic’ increase in homelessness in Los Angeles has seen hundreds of tents line the beach’s famous boardwalk.

Business owners say they are being forced to close their doors and longterm residents are afraid to leave their homes after dark after being subjected to violent attacks and intimidation.

Recent incidents – including a shooting on April 28 and an explosion at a homeless encampment – have left residents and business owners shaken.

Fed-up locals have written to city and county officials pleading for them to intervene.

Police patrol the Venice Beach Boardwalk on April 20, which has seen an explosion in homeless numbers during COVID lockdowns 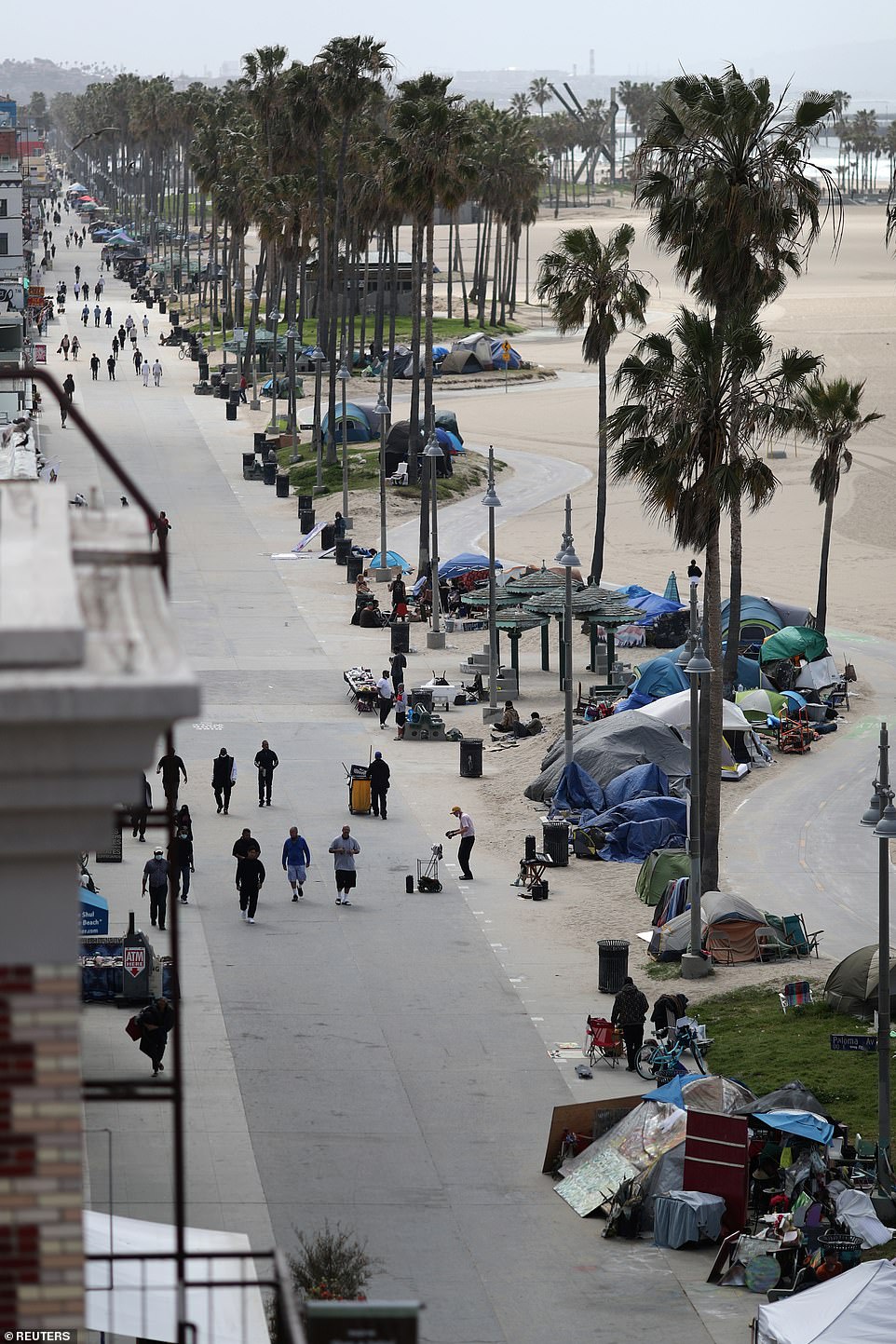 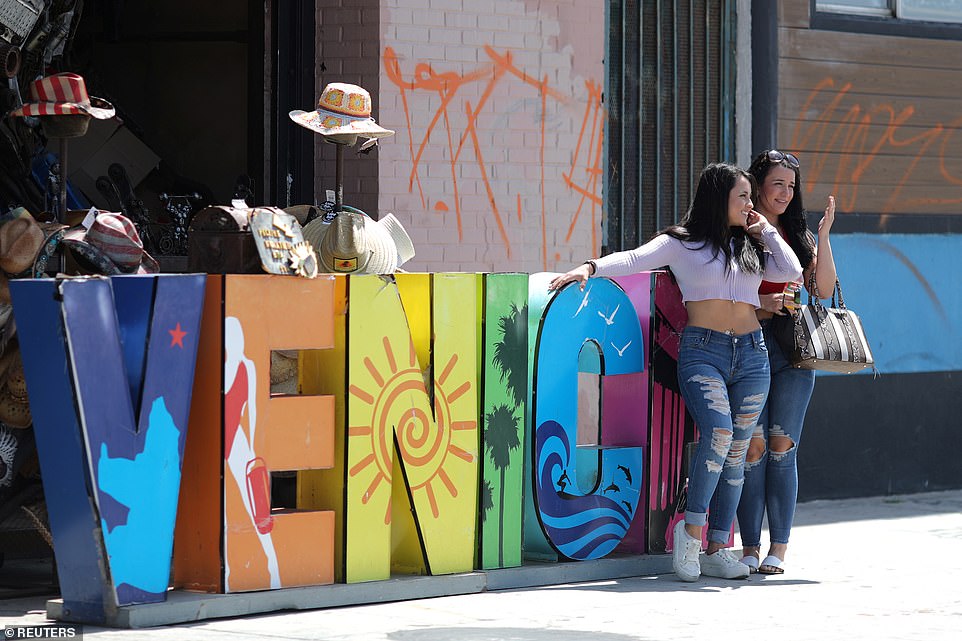 Venice Beach has traditionally been a major drawcard for tourists, such as the ones above posing for a picture with the Venice sign, but residents say they are afraid to go out after dark now (file photo April 20)

The world-famous alternative beach community, 16 miles from downtown Los Angeles, has traditionally been a major tourism drawcard for the Californian city.

However, now the palm trees and promenade are blighted by hundreds of tents. The accompanying anti-social behavior has unsettled longterm business owners.

Hairdresser Kevin Buttress, 32, who has owner the Xquisite Barber Lounge for five years, said he had suffered two violent attacks in recent months.

He told Fox News he was attacked in November by a pit bull owned by a homeless person and was knocked unconscious with a skateboard.

‘I’ve given a lot of myself to the community of Venice Beach,’ Buttress said. ‘And to see everything just fall to pieces, it’s messed up,’ he told Fox.

Buttress said the suspect in his attack was arrested and released days later amid efforts by Los Angeles County to cut the number of jail inmates over concerns about the spread of COVID-19.

Hundreds of residents have put their signatures to a letter pleading for help from city and county officials.

‘Venice’s world famous beach and boardwalk are crippled,’ it says.

‘Local children are refusing to come to the beach because they’re frightened by what they’ve witnessed. Seniors who live on or near the boardwalk are terrified of walking in their own neighborhoods.’

She said residents were afraid to be out after dark, and there were fights several times a day and shootings and stabbings on a weekly basis.

‘It’s just a very dangerous time to be a Venice resident right now,’ she said.

Earlier this year,  Klaus Moeller, the co-owner of Ben & Jerry’s at Venice Beach, said he was closing his ice cream store after a huge increase in crime and homeless camps during the pandemic.

A report released earlier this year by the University of California in Los Angeles found homeless rates had increased by 50% in five years.

It found the economic fallout of the pandemic has left many more low-income residents on the brink of housing insecurity.

Official figures suggest there are about 15,000 chronically homeless people in L.A. County.

When ‘couch surfers’ and others who bounce in and out of homelessness, are included, that figure balloons to 66,000.

Dan Flaming, president of the Economic Roundtable, has projected that figure will nearly double in the next four years.

‘That would be catastrophic for us,’ Flaming told ABC7 in January. 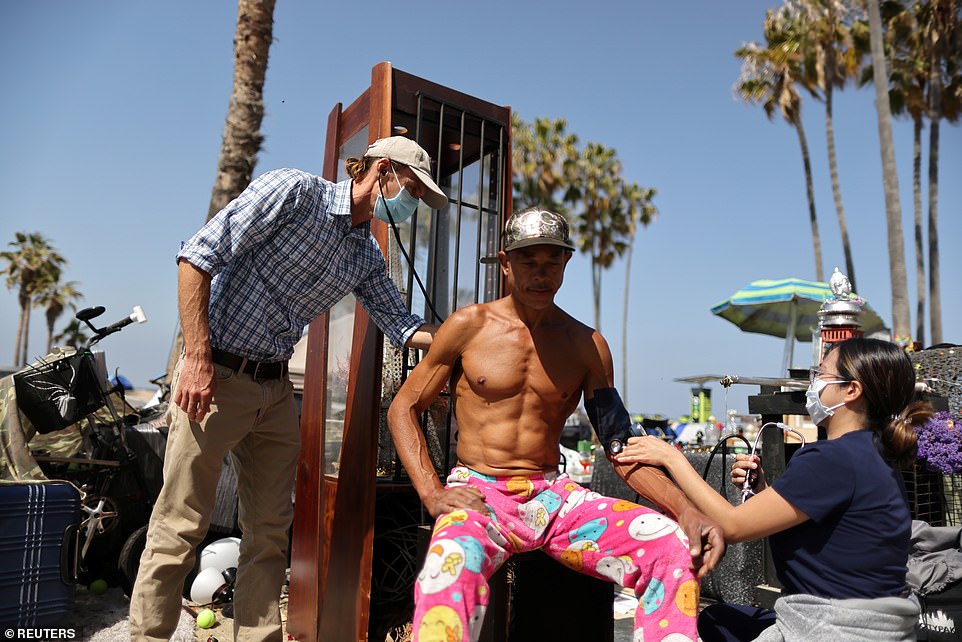 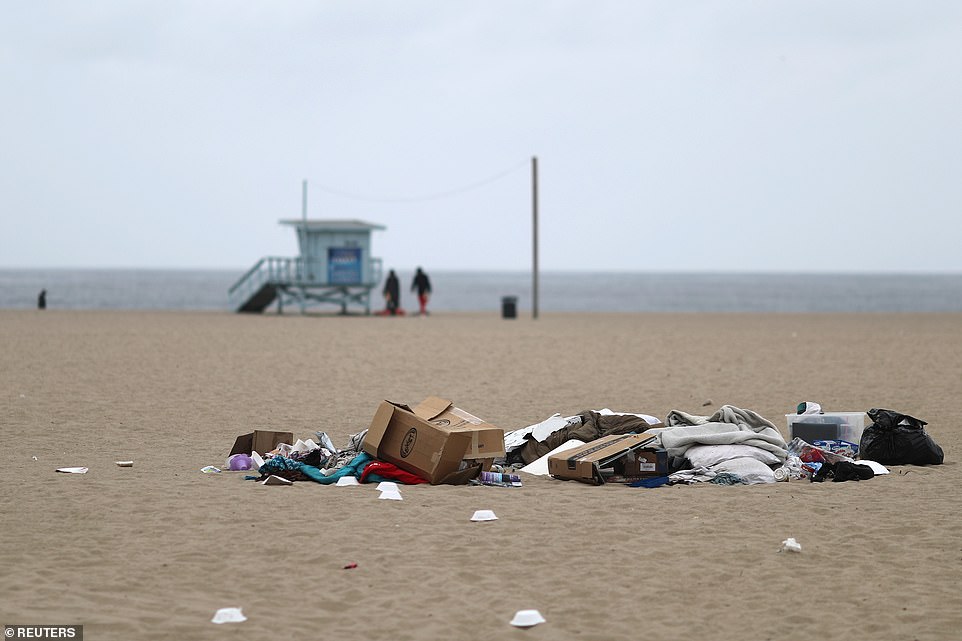 Rubbish and waste litter the golden sands of Venice Beach. Anti-social elements have made it dangerous to go out after dark, residents say 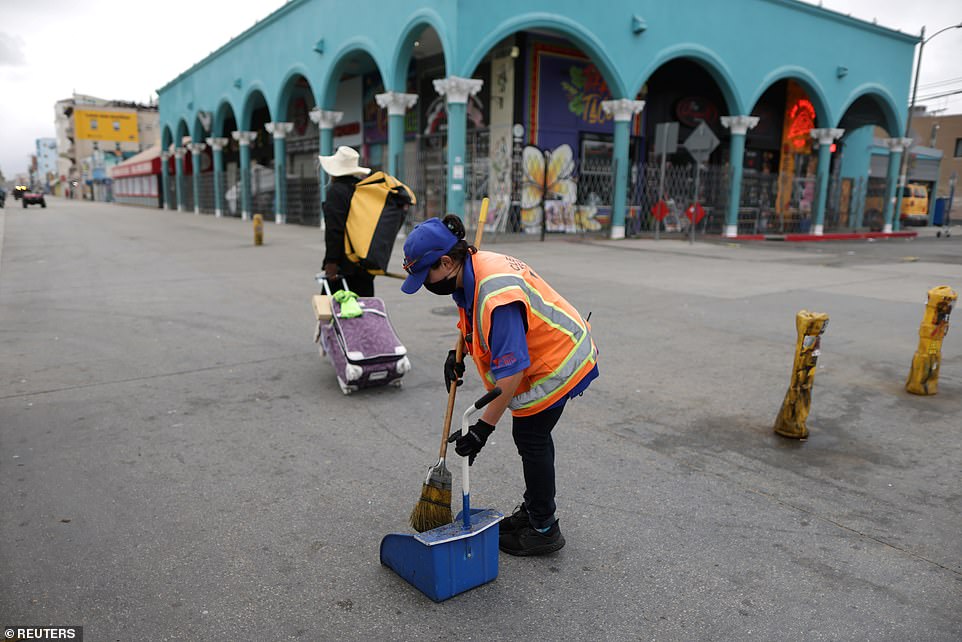 A street cleaner sweeps the boardwalk at Venice Beach on April 13. Hundreds of residents have signed a letter asking for help from city and county officials to counter the recent crimewave 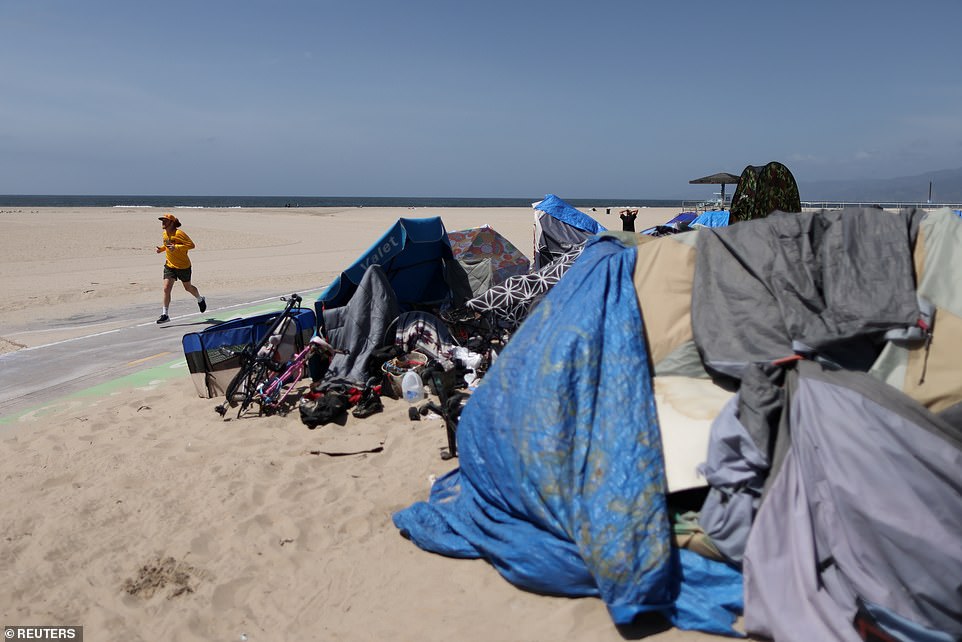 Fights occur several times a day, while shootings and stabbings are common, say residents of Venice Beach, who are fearful of increased crime rates since the homeless encampments became permanent 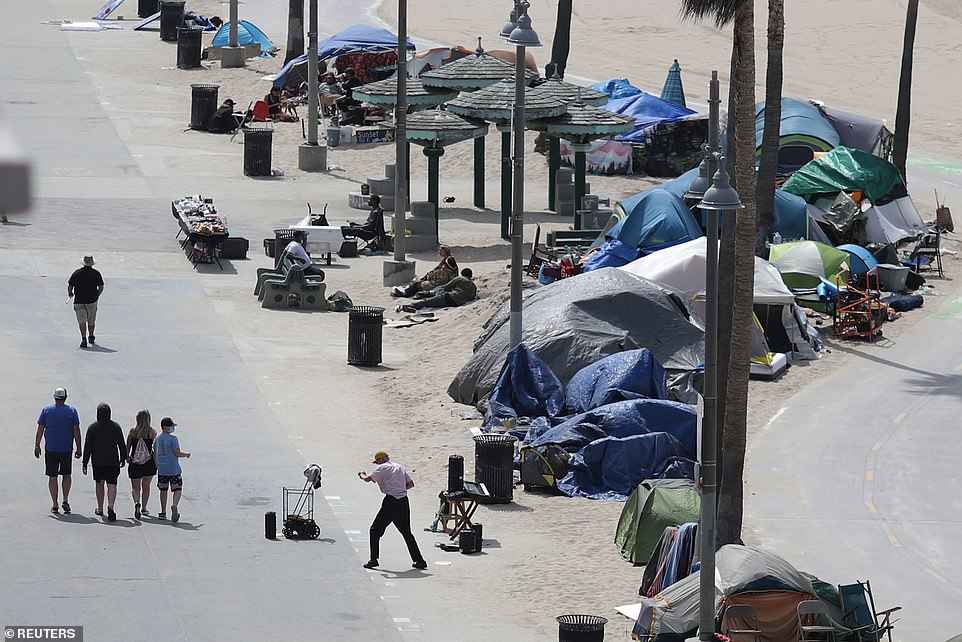 ‘Venice’s world famous beach and boardwalk are crippled,’ a letter to city and county officials from residents says. They are asking for help 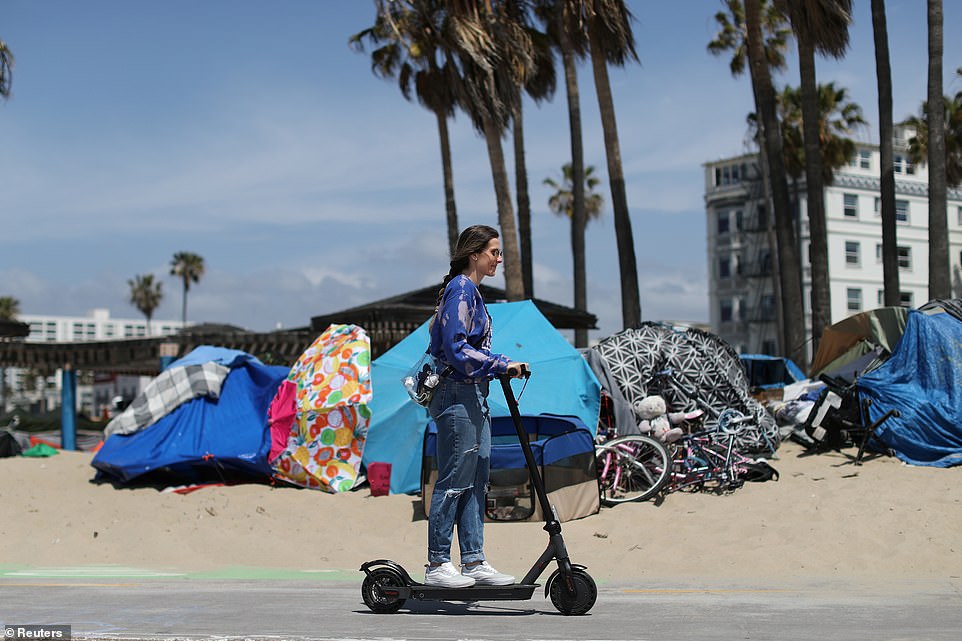 Official figures suggest there are about 15,000 chronically homeless people in L.A. County, but that figure rises to around 66,000 when it figures in the occasional homeless

According to figures from the Los Angeles Police Department provided to the Venice Neighborhood Council, the violent robberies in the neighborhood are up 177% from last year.

The same period has also seen a 162% increase in cases of assault with a deadly weapon involving a homeless person.

Videos depicting fires, fights, and harassment are a common sight on social media.

One such video shows a person showing an unidentified person hurling a homemade Molotov cocktail into a tent shortly before it bursts into flames.

And the death of a pet dog named Togo who was killed in a house fire has also been blamed on homeless people in the area.

The pet had become ‘the latest victim of Venice’s continued degeneration when a transient threw an accelerant into his home, burning him alive,’ according to a tribute. 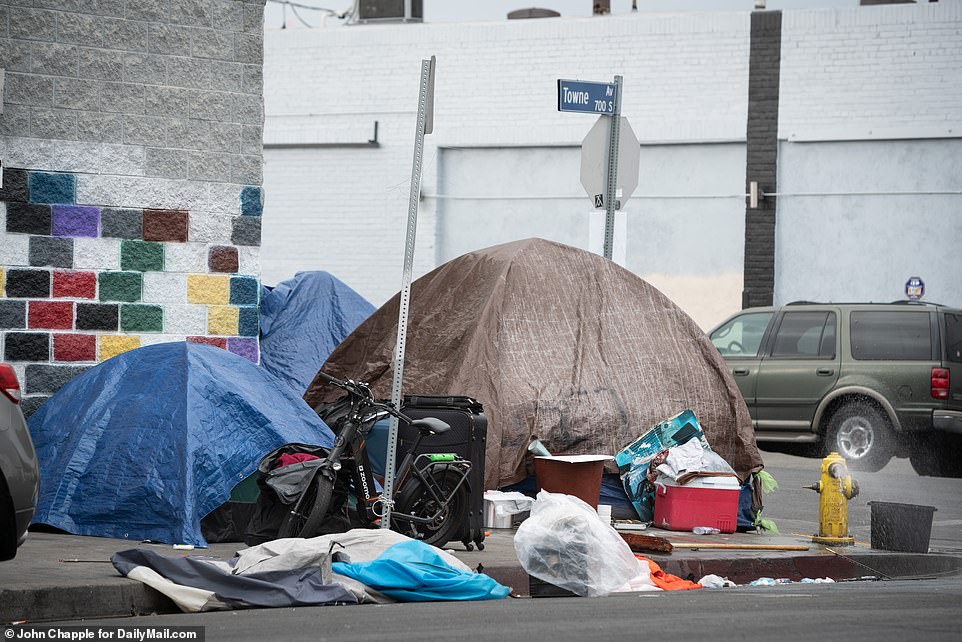 An estimated 5,000 people live in Los Angeles’s ‘Skid Row’, a permanent series of tent-lined streets in the downtown area 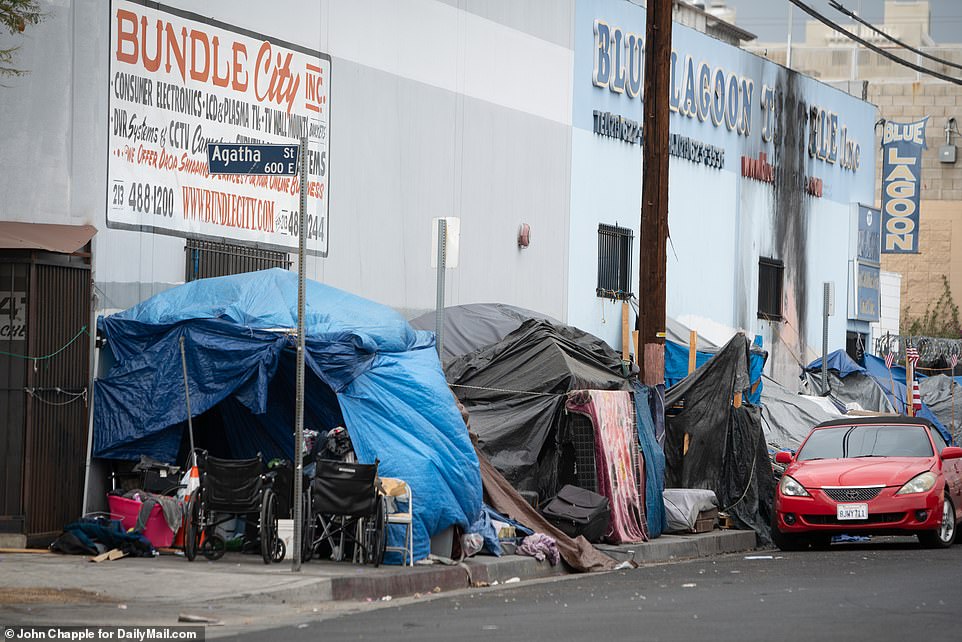 The squalid and filthy conditions of Skid Row have only been exacerbated by the COVID-19, with the economic impact of the pandemic forcing many into living on the streets 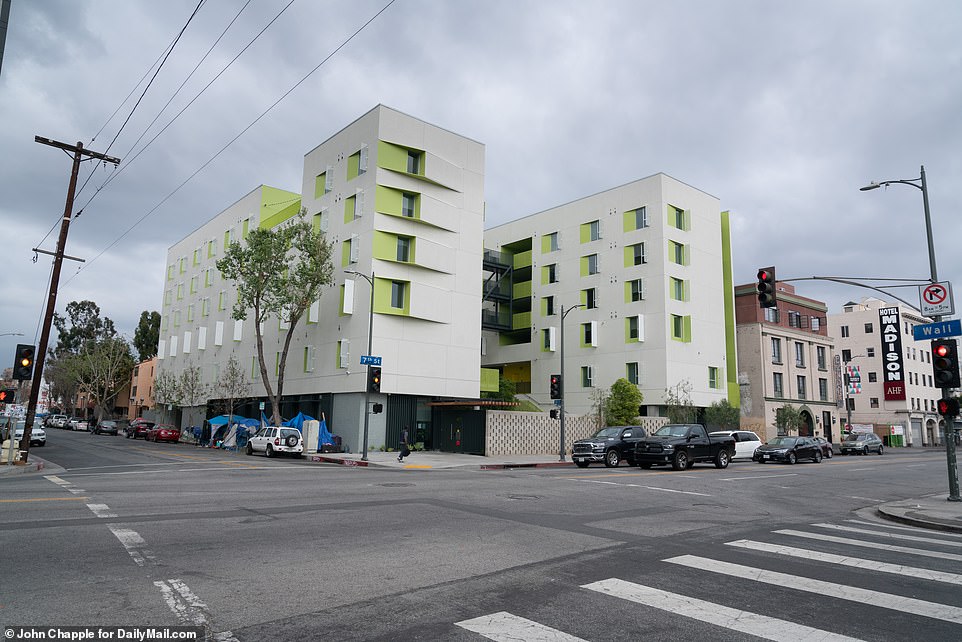 In downtown Los Angeles, efforts are continuing to rehouse some 5000 homeless people who live in a permanent encampment known as Skid Row.

In April, federal Judge David Carter told LA officials they must offer shelter to the more than 4,600 people living on the streets in Skid Row, by October 18.

The order comes in response to an ongoing lawsuit LA Alliance for Human Rights – a group of downtown business owners and residents – who have accused the city of years of negligence which has allowed homelessness to soar in Los Angeles and tent encampments to spread.

‘This ever-worsening public health and safety emergency demands immediate, life-saving action. The City and County of Los Angeles have shown themselves to be unable or unwilling to devise effective solutions to L.A.’s homelessness crisis,’ Judge Carter wrote in a 110-page brief.

If the city fails to follow the order, it appears that it could lose police enforcement to remove the unauthorized encampments. It is not clear if the The City and County of Los Angeles will appeal the order.

Around 100 Skid Row residents are being given keys to a new studio apartments.

The apartments are small – just 380 square feet – but they’ll be a marked improvement from the tent encampments that have mushroomed near LA’s downtown. A federal judge earlier this week ordered the city to finally to something to house the 4,600 people who are estimated to be living in the area without homes.

The first 98 people to soon be formerly homeless are moving into the studio apartments.

The city has said $1 billion will be placed in an escrow account to tackle the crisis. The order states that LA county and officials must find land or properties for 455,000 new units of housing, including 185,000 units for lower-income tenants, to be able to home the 4,600 homeless in Skid Row.

One step towards that is the new studio apartment building which opened in the heart of Skid Row last week aimed at housing the homeless.

The project is the first of three HHH-funded permanent supportive housing communities opening this year to provide homeless housing.

The judge’s order states that the city must also provide ‘appropriate emergency, interim or permanent housing and treatment services,’ according to the Los Angeles Times.

The costs for those services would be split between the city and county.

Shelters must also offer single women and unaccompanied children a place to stay within 90 days of them asking help, rather than the typical 120 days.

Once shelter is offered to everyone on Skid Row, the city can enforce laws aimed at keeping streets and sidewalks in the area clear of tents, which are ever-present on Skid Row. 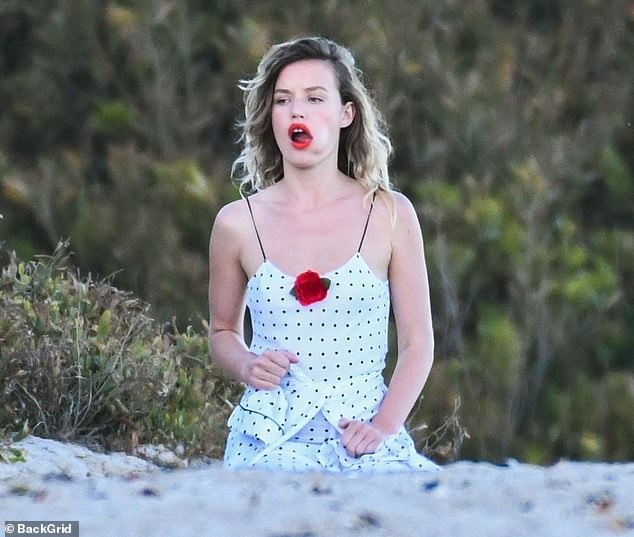 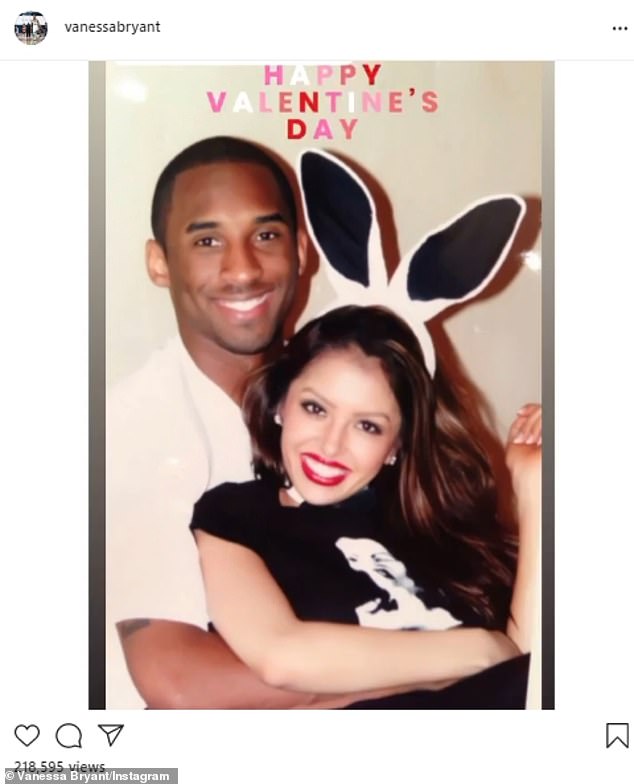 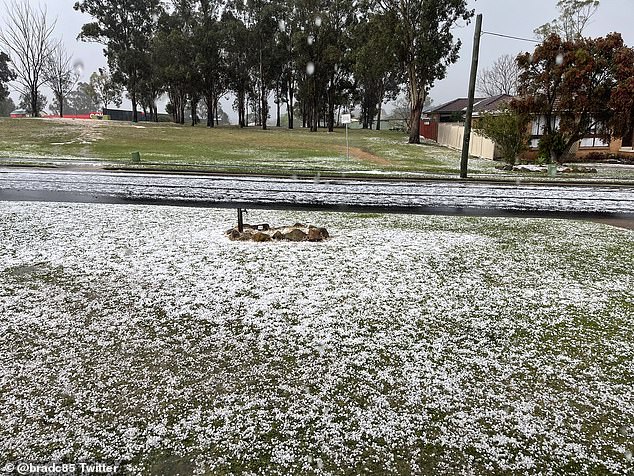 NYC gang member, 25, arraigned over murder of Columbia student as it emerged he was on PAROLE
1 hour ago

A black couple ‘erased themselves’ from their home value went up by nearly $500,000
2 hours ago