A 31-year-old woman testified against R. Kelly on Thursday speaking on their relationship which began when she was 15-years-old.

Kelly’s sex abuse trial, which is currently being held at a federal courthouse in Brooklyn, continued on Thursday and ran late as a result of Hurricane Ida which left parts of New York City flooded.

Three witnesses took the stand, including the 31-year-old woman who recounted how the singer struck up a relationship with her in 2006 when she was 15.

The woman testified to Kelly’s inappropriate behavior but was reluctant to elaborate. The accuser dodged the prosecutor’s questions about when she and Kelly first had sex.

‘I don’t recall how old I was,’ the woman testified at Kelly’s New York City sex-trafficking trial. When pressed further on the timing, she demurred, saying, ‘It’s hard. It was 16 years ago.’

The witness stood apart from other women who have testified for the government against the R&B superstar in Brooklyn federal court by not accusing him of sexually abusing her when she was underage.

R. Kelly, 54, listens during his trial in Brooklyn federal court, (shown in a court sketch from Aug. 26) as witnesses testify to years of sexual abuse 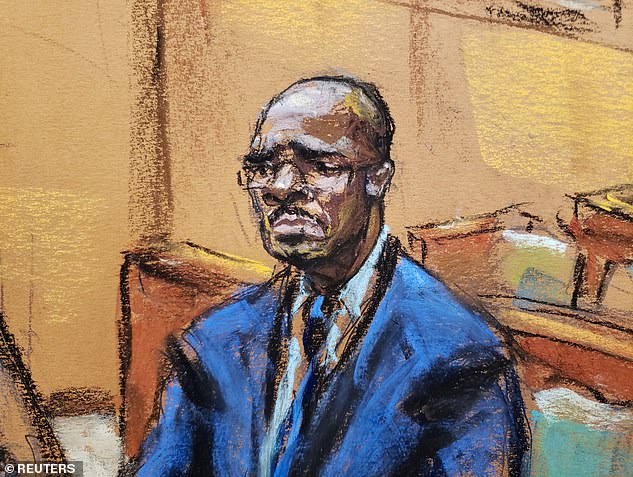 The R&B star (shown in a court sketch from Aug. 9) is facing years of allegations he sexually abused women, girls, and boys while pursing fame and fortune

‘Do you want to be here today?’ the prosecutor asked at one point, to which she blatantly responded, ‘No.’

Despite her reluctance, the woman gave testimony mirroring that of Kelly’s key accusers — how he groomed her by inviting her backstage at one of her shows, getting her to sign a non-disclosure agreement and eventually paying for flights to join him at hotels in cities where he had concerts and for visits to his Chicago-area mansion.

It appeared that some of her early contact with him occurred around the time he was being prosecuted for child pornography that ended in his acquittal at a 2008 trial.

She testified about agreeing to have threesomes with another woman and described how the defendant had her put on lingerie and interact with a girlfriend who was wearing a leash and collar.

‘She was on her hands and knees and I was walking her,’ she said.

Kelly’s defense team declined to cross-examine the witness, a signal it believed she didn’t do much damage.

Yongfei Wu, a forensic expert from Chicago, also testified on Thursday. He took a cheek swab and linked it to the semen found on the t-shirt of one of Kelly’s accusers, Jerhonda Johnson Pace.

The semen stains were found on a T-shirt of an underage accuser who claimed she used the item to clean herself after being forced to perform oral sex.

Wu testified that the odds of the semen belonging to anyone else besides Kelly are 1 in 11 decillion (32 zeroes).  The DNA ‘are exactly the same,’ Wu told the court.

Pace, now 28 and heavily pregnant when she took the stand last month, said when she was a 16-years-old Kelly lured her to his Illinois mansion and was happy to learn she was a virgin because he wanted to ‘train’ her to please him sexually.

She told the court how he soon started controlling her with his so-called ‘Rob’s rules’, denying her from eating or using the bathroom without his permission, making her call him ‘daddy’ and taking away her phone.

Pace testified that on the final day she spent in Kelly’s house in 2010 she was distracted and didn’t immediately acknowledge Kelly’s presence when he entered and Kelly slapped her and choked her out until she passed out. ‘

After that he spat in her face and told her to put her head down in shame before making her perform oral sex on him. 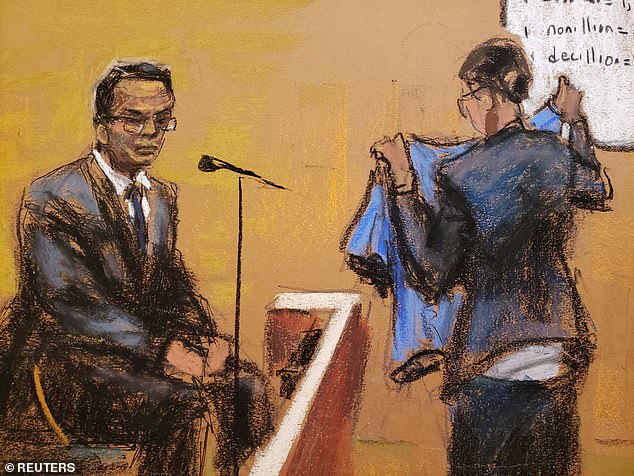 Forensic expert Yongfei Wu (shown in a court sketch from Sept. 2) said the odds the semen stains found on a T-shirt presented by an underage accuser belonging to anyone else besides Kelly are 1 in 11 decillion 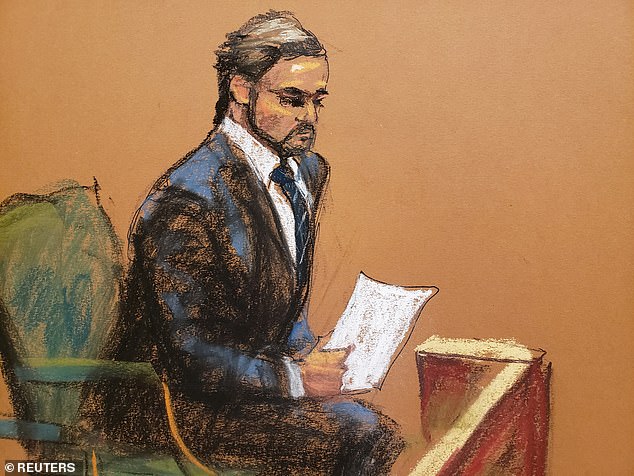 Chris Wilson, the agent who analyzed R. Kelly’s computer data, (shown in a court sketch from Sept. 2) testified during Kelly’s sex abuse trial revealing incriminating evidence on from two iPhones and a laptop

Pace said Kelly ejaculated on her face and she wiped Kelly’s spit and semen on a blue T-shirt that was presented in court last month as evidence.

Pace said after that incident she made up an excuse to leave the mansion and never returned.

While Kelly’s lawyer Deveraux Cannick did not argue that was the singer’s DNA on the T-shirt she asked Wu where he could confirm know the origin of the shirt, Yahoo.com reported.

‘You don’t know where that shirt came from?’ she asked Wu, to which he responded ‘No.’

Chris Wilson, a computer forensic agent for the Department of Homeland Security, also took the stand on Thursday.

He said he examined and retrieved information from two iPhones and a laptop and found a text message from an unnamed sender sent on on Christmas Eve 2017 that read: ‘You’re young and there’s a lot of things you don’t know. … I want to groom you and be bonded with you.’

This comes one day after the bombshell testimony from Pastor Nathan Edmond, who married the  R&B singer to Aaliyah when she was just 15 in a 10-minute ceremony held inside a Chicago hotel room.

Edmond alleged that he was recruited to marry Kelly, who was aged 27 at the time, after he was shown a falsified document that stated Aaliyah was 18.

The marriage was annulled in 1995 by Aaliyah’s parents, who did not know about the wedding before it occurred. She tragically died in a plane crash six years later at the age of 22.

Meanwhile on, Wednesday, the court also heard testimony from another alleged victim of Kelly’s who claimed that the singer kept a gun by his side while he berated her before forcing her to give him oral sex.

‘He had a weapon, so I wasn´t going to step out of line,’ the woman said while recounting the 2018 episode. 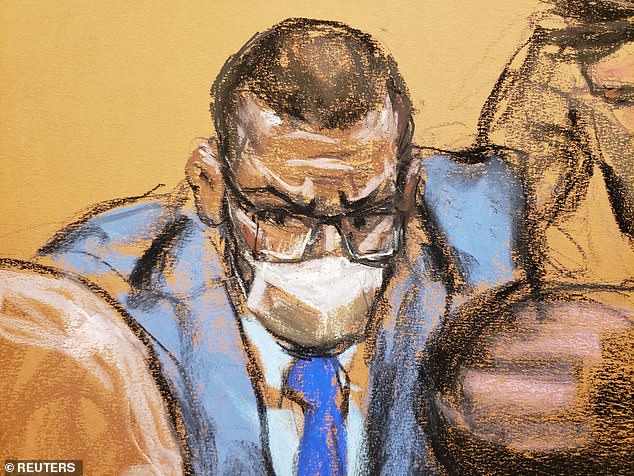 Kelly confered with his lawyers during his sex abuse trial (shown in a court sketch from Sept. 2) 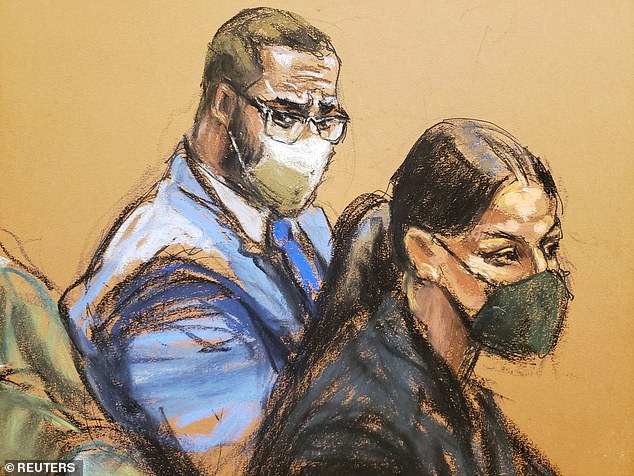 Kelly’s lawyer Nicole Blank Becker (shown in a court sketch from Sept. 2) did not argue that the singer’s DNA was that on the T-shirt but asked whether it was possible ‘someone jumped across someone’s fence’ and stole it

She said that at the time she spotted Kelly with a gun, he demanded to know, ‘How many men have you seen naked?’ He also instructed her to act ‘excited like a puppy’ and added: ‘I still have a lot to teach you.’

She testified that she saw Kelly on multiple occasions.

Their last encounter came inside a New York City hotel suite, where she resisted having sex with him. She said he responded by warning her not to defy him, saying, ‘I’m a f–ing legend.’

Kelly has repeatedly denied accusations that he preyed on victims during a 30-year career. His lawyers have portrayed his accusers as groupies who are lying about their relationships with him.

Jurors so far have heard from a steady stream of accusers claiming Kelly began sexually degrading them when they were still in their teens. They said he used his stardom to lure them into an insular world where he watched their every move and doled out perverse punishments, spanking them and isolating them in hotel rooms if they broke a vow to never speak about him to anyone else.

Kelly´s personal physician has also testified, saying he treated him for herpes for several years.

The trial is unfolding under coronavirus precautions restricting the press and the public to overflow courtrooms with video feeds. That´s made it difficult to discern the reactions of Kelly, who has been jailed since his federal indictment was announced in 2019.

Kelly faces between 10 years and life in prison if convicted on all counts.

The Block couple make a HUGE mistake in their walk-in wardrobe… so can you spot the problem? 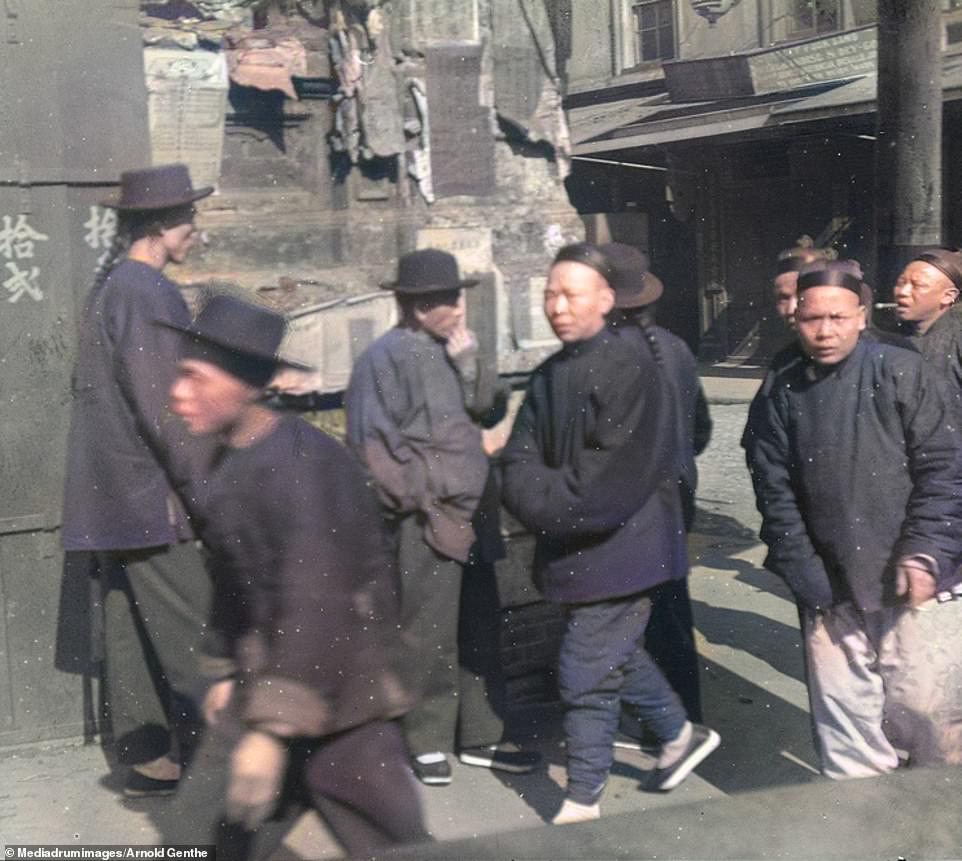 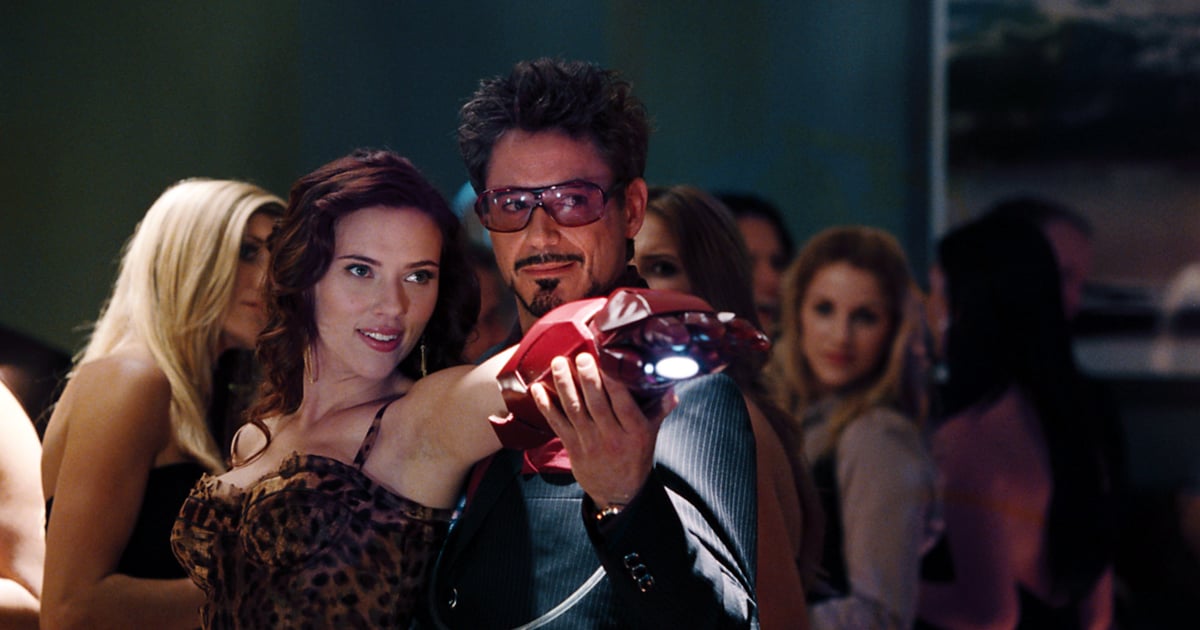 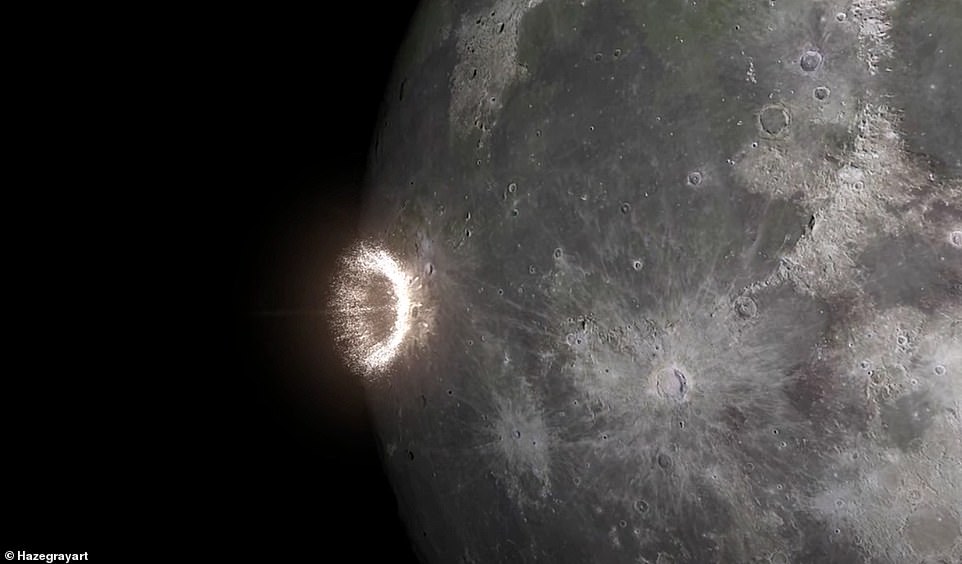