A leader of the Portland Proud Boys was shot in the foot during a Medical Freedom protest in Olympia, Washington on Saturday.

Tusitala ‘Tiny’ Toese was shot in the foot while protesting COVID mandate in the state.

Footage of the Medical Freedom protest, which was live-streamed online by fellow Proud Boy Robert Zerfing, shows Toese bleeding from the foot.

Tusitala ‘Tiny’ Toese, a leader of the Portland Proud Boys, was shot in the foot during a protest on Saturday September 4.(Pictured: Toese laid on the sidewalk as his wound was treated) 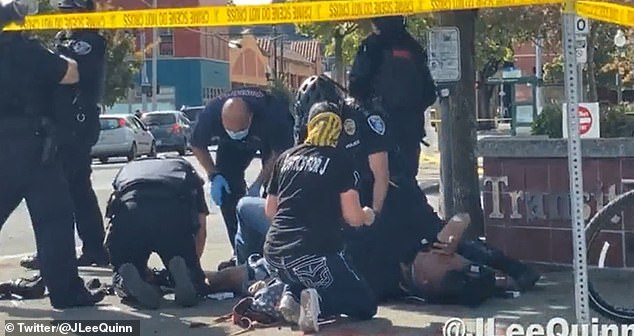 The Proud Boys gathered in Olympia, Washington to protest the state’s COVID mandate. (Pictured: Toese lays on the sidewalk after being shot in the foot September 4) 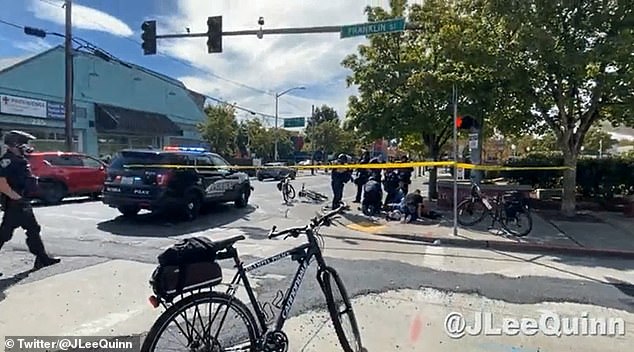 The Proud Boys claim that Toese was shot by a member of Antifa who clashed with them at the protest and then boarded a public bus. A suspect has not been named. (Pictured: Olympia police arrived at the scene and taped off the area September 4) 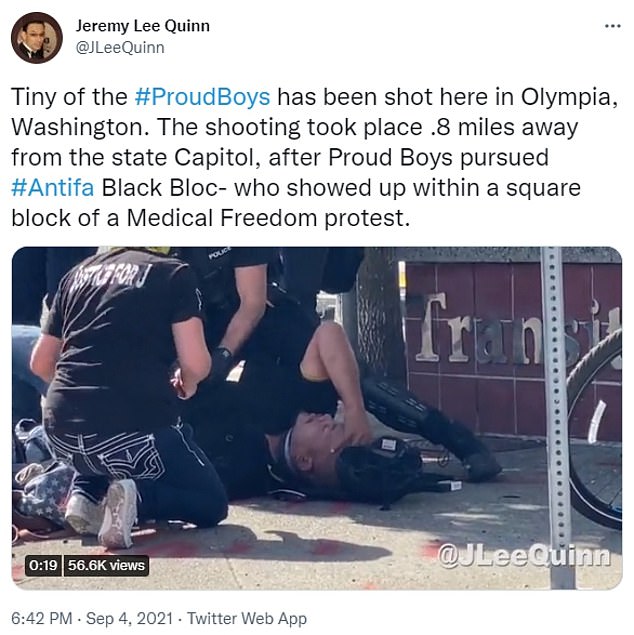 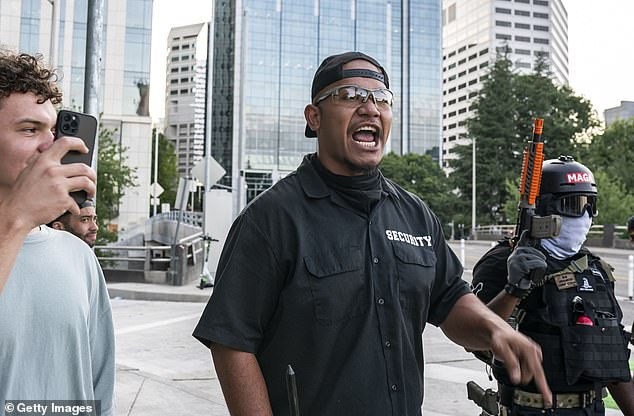 Toese is a well-known leader of the Portland Proud Boys. He was arrested in August 2020 after he became violent during a protest (Pictured: Toese argues with anti-fascists on August 8, 2021 in Portland, Oregon)

His fellow protestors rushed to him and took off his shoe to attend to the wound as Toese lay on the sidewalk wincing in pain.

The Proud Boys then began inspecting the scene for shell casings at the bus stop next to where Toese was shot.

Paramedics s arrived to the scene as local police taped off the area at the Intercity Transit mall on State Avenue Northeast near Franklin Street.

Zerfing said in a follow up video that doctors believe Toese may have nicked an artery but do not know if the bullet hit the bone. He also said that detectives might have a suspect in custody but the suspect has not been named.

It’s unclear who fired the shots but the Proud Boys had been squaring off with black-clad figures called Antifa in the minutes before the shooting, according to several videos and tweets about the event.

More than 50 Proud Boys gathered for the Medical Freedom protest. Footage of the event shows them marching down the streets of Olympia chanting ‘F**k Antifa’ and yelling slurs. 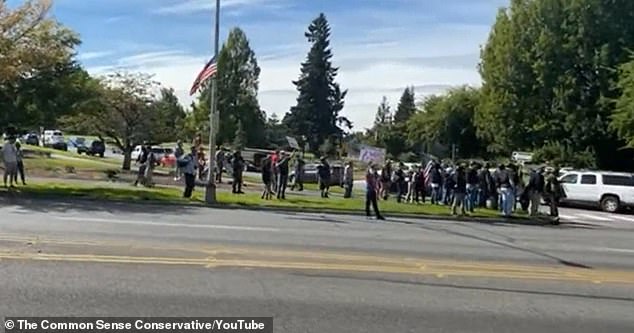 The Proud Boys clashed with Antifa as they chanted ‘F**k Antifa’ while marching down the streets of downtown Olympia (Pictured: Proud Boys gathered in Olympia to protest COVID mandates September 4) 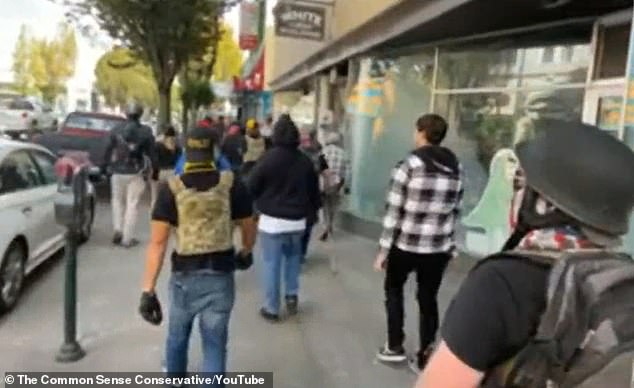 The herd of Proud Boys chased down several people they believed to be Antifa on Saturday (Pictured: Proud Boys marching down the street in Olympia to protest COVID mandates September 4) 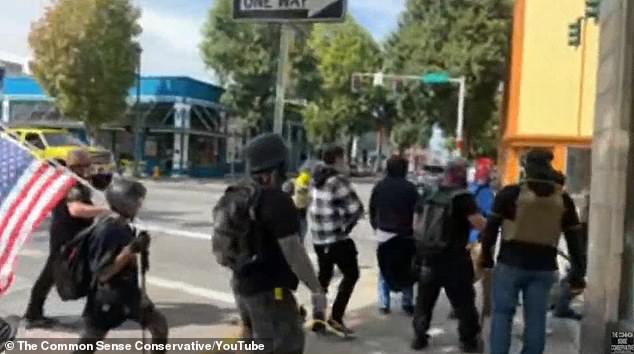 A freelance journalist was attacked by the Proud Boys during their COVID protest in Olympia.

In the live-stream, Zerfing said ‘Antifa shot at them while they were running’ and then jumped on a bus.

A local transit employee said that the bus stop has video surveillance and that one of the buses which heard the shots may have footage of the gunfire.

The Olympia Police Department did not respond to DailyMail.com.

Toese is a  well-known member of the Portland Proud boys. He attends protest often and was arrested in August 2020 after he became violent during a protest when the Proud Boys clashed with Antifa and Black Lives Matter groups.

The Medical Freedom protest was held to object to Washington’s COVID mandates which requires mask to be worn in indoor public spaces.

During Saturday’s protest, the Proud Boys chased down several people who they believed were Antifa, beat up and maced a female reporter, and chased three minors who were unassociated with the protest, according to Seattle Youth Liberation Front.

Freelance journalist Alissa Azar was tracked down and beaten by the Proud Boys during the protest. Footage of the protest does not show her beating but recorded the men yelling at her. Azar can be heard screaming for the men to get off her and tweeted about the attack.

In the clip, the Proud Boys are heard spotting her shouting ‘Yo Alissa’ just before she can be heard screaming.

She explained that she began running when a group of about 50 men began chasing her and eventually pushed her to the ground, pulled her hair, and sprayed her with bear mace. Azar eventually got away and hid inside a local bar.

Thurston County, where the protest was held, has recorded 111 recent COVID cases adding to the 15,149 cases that have been reported since the pandemic began.

Nuzzo said protesters have gathered outside the schools on Thursday and Friday to voice their anger with the state’s mask requirements for staff and students.

Pictures of groups of protesters with large banners that read, ‘Stop the mandate’ – seemingly a call back to ‘Stop the steal’ rally cries during the January 6 Capitol riot – outside the school. 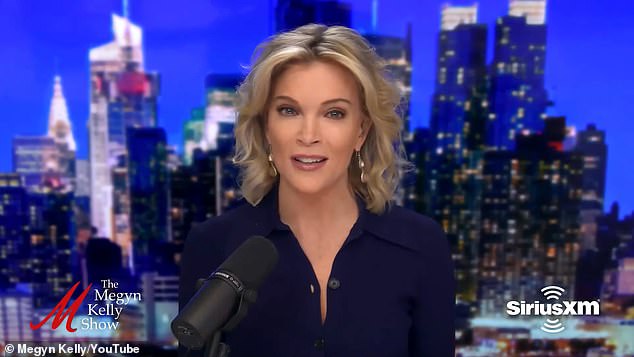 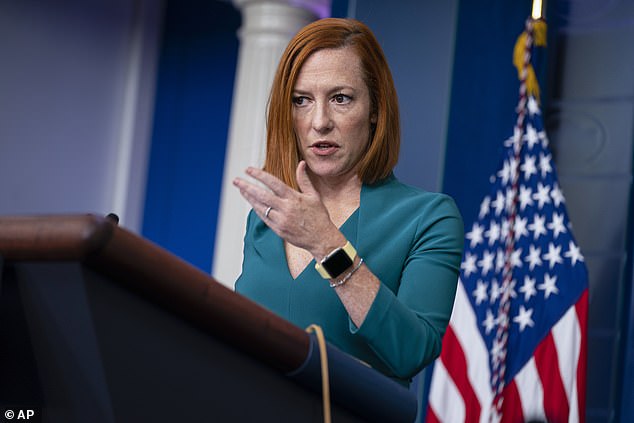 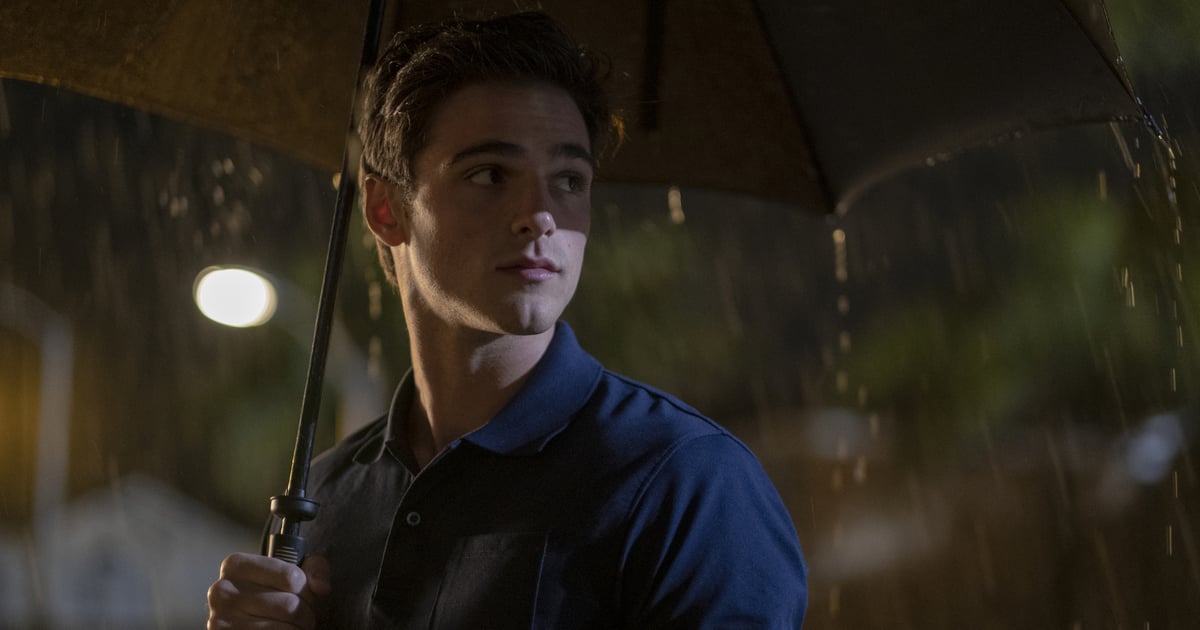 Is Nate Secretly in Love With Jules on Euphoria? The Clue You Missed