A former Playboy model says she is afraid for her safety after receiving a slew of vile abuse and even death threats on Instagram from users who she says have been ‘scammed’ by fake catfish accounts set up in her name.

Jenna Bentley, 32, from Los Angeles, has spent years fielding DMs from her adoring fans on social media – having racked up more than 800,000 followers on Instagram alone thanks to her modeling work for risque magazines like Playboy and Maxim, as well as her popular account on OnlyFans.

However in the past seven months, Jenna says the messages being sent to her have taken a twisted turn for the abusive – claiming that she now regularly receives DMs from Instagram users threatening her life or urging her to ‘kill herself’.

According to Jenna, the abusive messages began in February 2021, after her ‘verified’ account and her popular backup account on Instagram were suddenly deleted – leaving her without a blue-check-approved presence to indicate her official account on the social media app.

Upset: Former Playboy model Jenna Bentley claims that she is being sent vicious death threats on Instagram by users who have been ‘scammed’ by fake accounts set up in her name 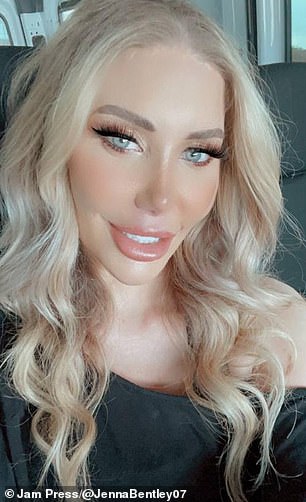 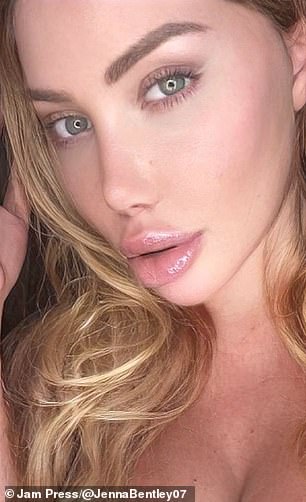 This, she claims, prompted several fake accounts to spring up on the social media app – some of which were used in order to elicit money from her unwitting fans in return for what the accounts claimed would be saucy images and videos.

When they sent their many to the fake accounts, but failed to receive anything back, they grew angry – and, Jenna claims, began sending her vitriolic messages of abuse that have left her terrified for her safety and struggling with her mental health.

‘Being told by strangers on the internet that they want me to die, that they’re going to come and kill me or telling me to kill myself – it’s really scary,’ Jenna said. ‘I don’t feel safe.’

According to Jenna, she had no idea that the catfish accounts existed until earlier this year, three months after her verified account was deleted, when she began receiving a slew of violent DMs, which prompted her to investigate the issue further.

‘Normally I never even look at DMs, I block and ignore but when my verified Instagram account was deleted in December 2020, the abuse really went up,’ she said. ‘I had 809,000 followers and when that [was removed], I used my backup account, which had 15,000 fans.

‘After that was shut down too in February 2021, the death threats began and I discovered there were dozens of fake accounts pretending to be me.’

Jenna claims these profiles are scamming people out of money and realized this when a man got in touch via her Twitter account and began harassing her.

‘This one guy kept going and going and I just thought he was a fan trying to get my attention so I ignored him, but then he contacted me on my OnlyFans page and said he had sent me money,’ she said.

‘I was really confused, so he sent me screenshots of a conversation he’d had with a fake Instagram account pretending to be me. 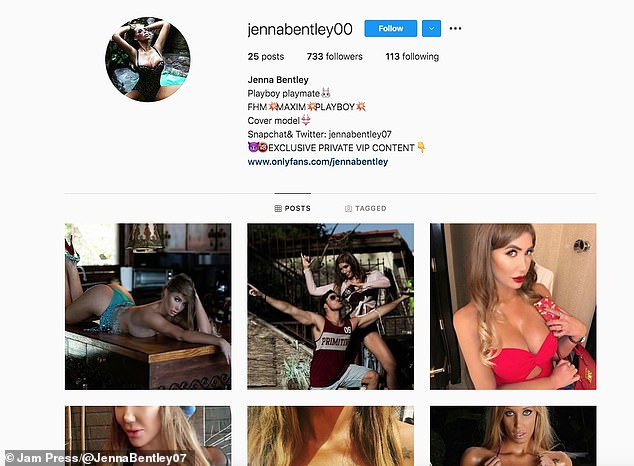 Watch out: The removal of her official Instagram pages led to several catfish accounts being set up in her name – which she claims were used to ‘scam’ her followers 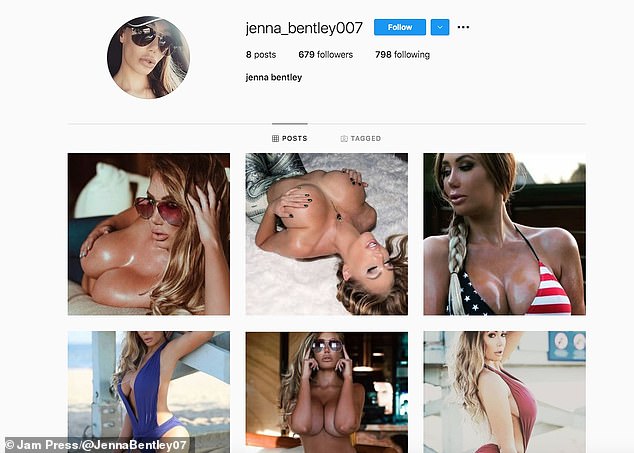 Shocking: One man messaged her on Twitter to demand money from her after he paid one of the fake accounts, which promised to send him risque content in return 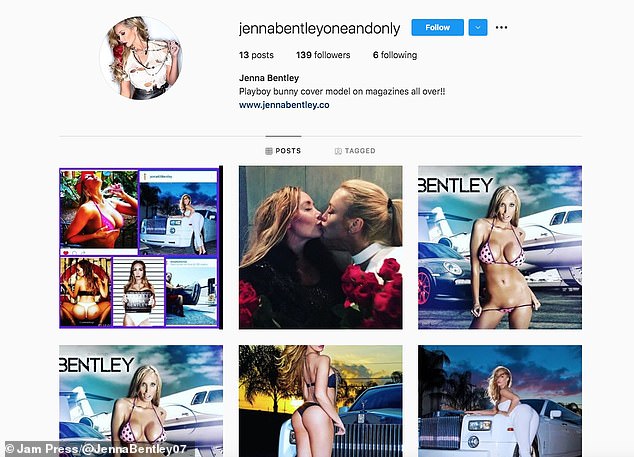 ‘Sneaky’: Jenna claims that one of the catfish accounts even messaged a photographer she had worked with in the past in order to try and get hold of more images of her

‘He said that he had sent me money for photographs through PayPal but he hadn’t received them and called me all these horrible names saying I’d scammed him.

‘I replied telling him that it wasn’t me and that I didn’t have PayPal, like I don’t use it for my work. I’m running a business, all my payments go through OnlyFans. Obviously he was really angry that he’d been duped but then said that I should pay him back.

‘It’s just relentless, I get so many messages a day from guys telling me they’ve sent me money for photos or videos that I haven’t delivered on.

‘And the scammers are so sneaky. One even messaged a photographer I work with a lot and asked for the links to the photos we’d done together.

‘Luckily the photographer was suspicious because we never speak on Instagram, so he texted me and asked if it was actually me.’

Jenna claims this issue isn’t an isolated incident that only happens to her – in fact, she says she knows a number of women who are losing money to scammers and getting abuse from fans because their Instagram accounts have been deleted.

She is now calling out the social media app for deleting her account, while insisting that she never shared the kind of provocative content that would give its administrators cause to remove it.

‘I don’t know why my accounts were deleted, I’ve always been very careful with what I post,’ she explained. ‘I see celebrities showing off their bums in thongs or covering their boobs with their hands but they aren’t removed.

‘This level of abuse and the worry that I’m losing money is having a profound effect on my mental health.’ 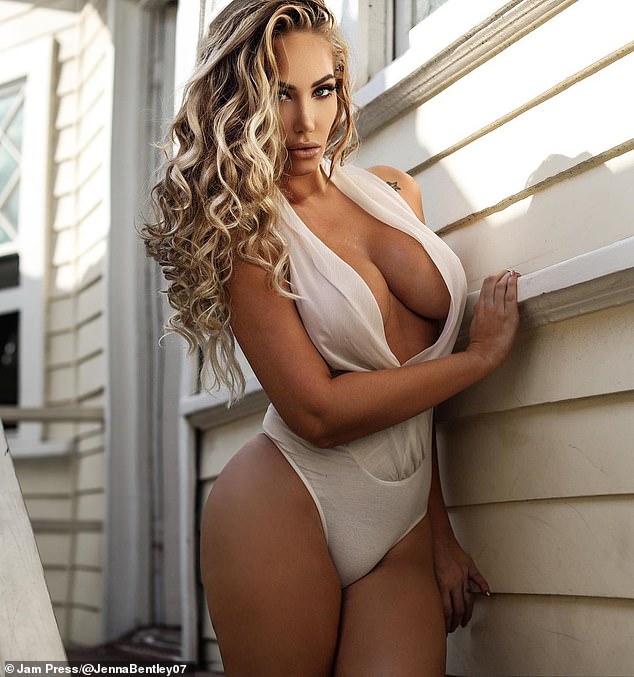 Distressing: ‘Being told by strangers on the internet that they want me to die, that they’re going to come and kill me or telling me to kill myself – it’s really scary,’ Jenna said 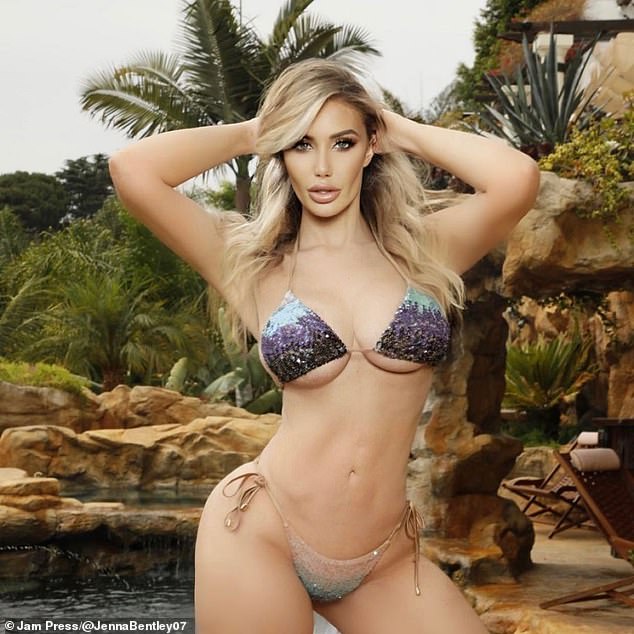 Concern: She says she is now afraid for her safety, but doesn’t want to report the death threats to the police because she doesn’t think she will be taken seriously 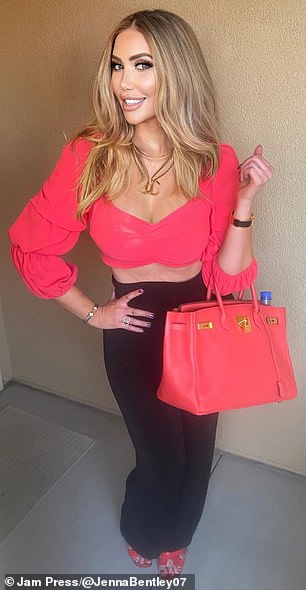 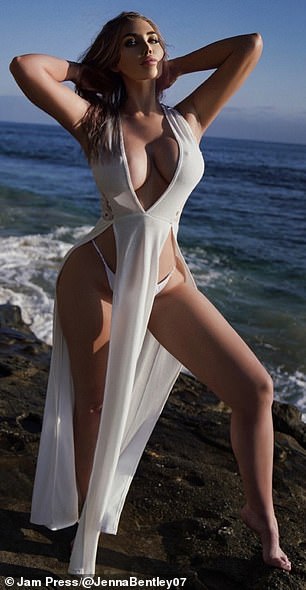 Clapback: Jenna is also hitting out at Instagram for deleting her accounts and failing to offer her any information about why they have been removed, or whether they will be reinstated

The OnlyFans model hasn’t reported the death threats to police because she is afraid that she wouldn’t be taken seriously – particularly when there are so many other crimes for them to deal with in LA.

‘I live in LA you know, there are gangs shooting at each other, murders and stuff,’ she said. ‘They wouldn’t come out and hear me talk about stealing my identity and getting death threats on the internet.’

However, Jenna is now calling out Instagram for failing to reinstate her verified account, claiming that she has ‘begged them for help’ on a number of occasions, but has yet to receive any information.

‘It’s getting to the point where I don’t know what to do anymore, I’m so tired of it,’ the former Playboy model said. ‘I’ve begged them to help me and sent emails explaining what’s happening but I never hear back. It’s like they don’t care.

‘I’ve tried my absolute hardest to follow their guidelines and in my opinion, have not broken them.’

When contacted about Jenna’s claims, a spokesperson for Instagram provided general guidelines and background on the app’s approach on imposter accounts and inauthentic activity, and how to appeal content removal.

‘The account in question has been taken down for breaking our rules,’ the statement said. ‘Instagram is a global platform for people of all ages and we have rules around nudity and sexual solicitation to ensure content is appropriate for everyone.

‘We allow sex positive content and discussion but we do not allow content that facilitates or coordinates sexual encounters between adults.

Instagram was also presented with images of existing fake profiles on August 18, which the site claims to now have removed, however Jam Press has since discovered new fake accounts, which also seem to break Instagram guidelines.

‘We have removed the suspicious impersonation accounts brought to our attention but not the fan pages,’ the statement continued. ‘Accounts that impersonate a person or entity are against our Community Guidelines and will be removed when we are made aware.

‘If someone believes they have spotted content or an account they believe to be fake, they can report it using our in-app tools. We have a trained team of reviewers who check these reports 24/7 and move quickly to remove content or accounts which violate our guidelines.

‘Regardless of the outcome, we will send them a notification to let them know the decision we made.’ 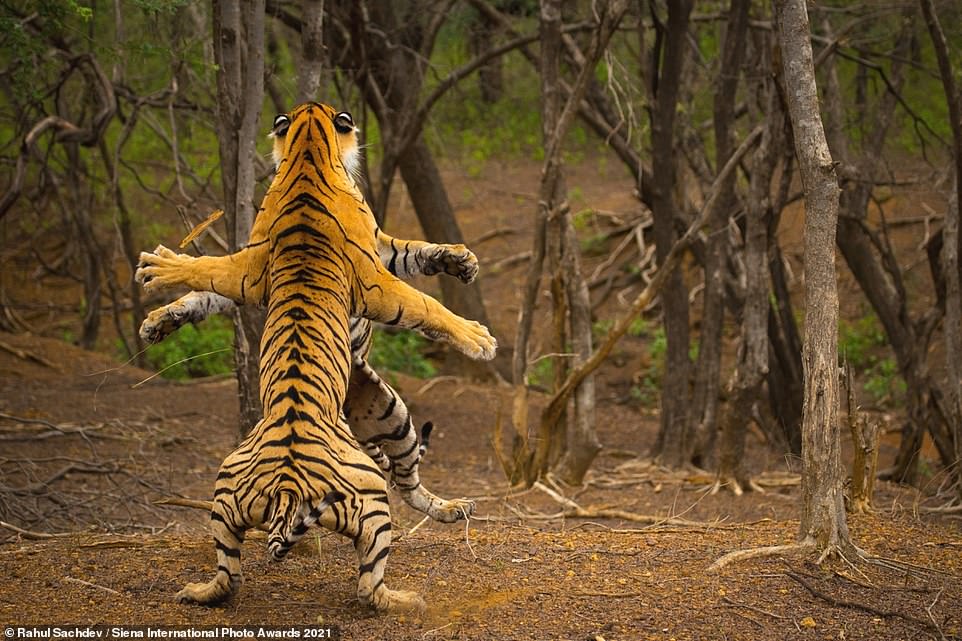 The incredible winning images of the Siena International Photo Awards 2021 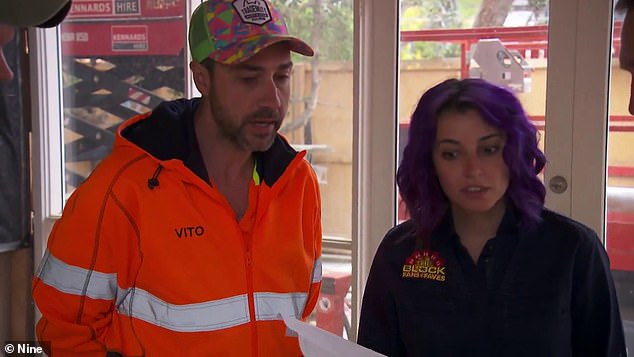 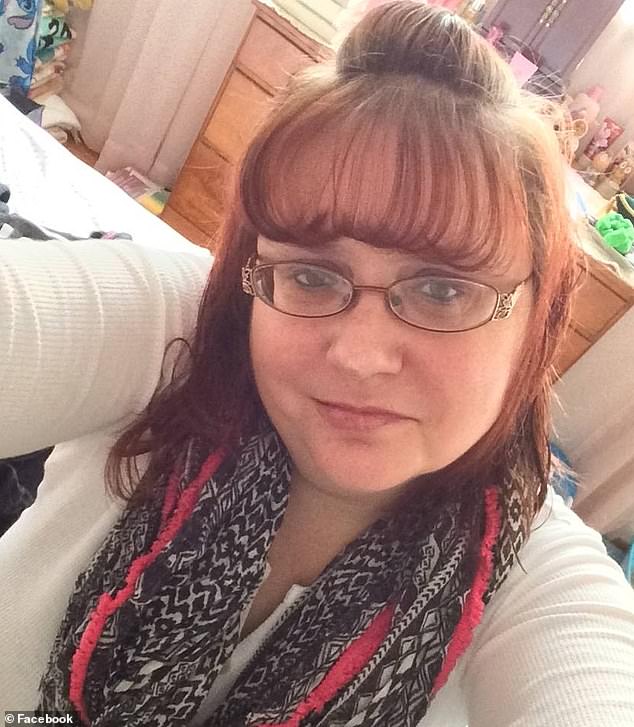