‘Dumb and Dumber’ is one of my favorite movies.

I don’t usually like slapstick comedy films but it’s so relentlessly stupid that it’s laugh-out-loud hilarious.

What passes for a plot involves two imbecilic best friends – played by Jeff Daniels and Jim Carrey – who crisscross America to return a suitcase full of cash to a woman they both fall in love with.

But really, it’s just an excuse for endless gags about how cerebrally challenged they are.

The longer the movie goes on, the more absurdly half-witted they reveal themselves to be.

I regret to say that President Joe Biden and his Vice-President, Kamala Harris are fast becoming the political equivalent of Lloyd Christmas and Harry Dunne.

Barely a day goes by when one of them isn’t doing something worthy of abject mockery – from Biden falling asleep at the COP26 climate change summit, to Harris appearing in a World Space Day video with hired child actors who she pretended were wide-eyed real kids enthralled by her exultation of space exploration.

(The video was made by a firm named ‘Sinking Ship Entertainment’ – a metaphor for the Biden administration if ever there was one.)

And it’s not just me that thinks this.

Barely a day goes by when either Biden or Harris are doing something worthy of abject mockery (Above: Biden falling asleep at the COP26 climate change summit) 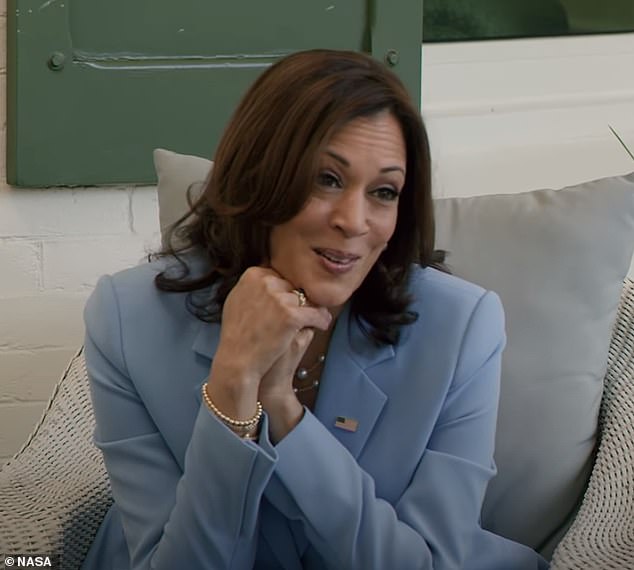 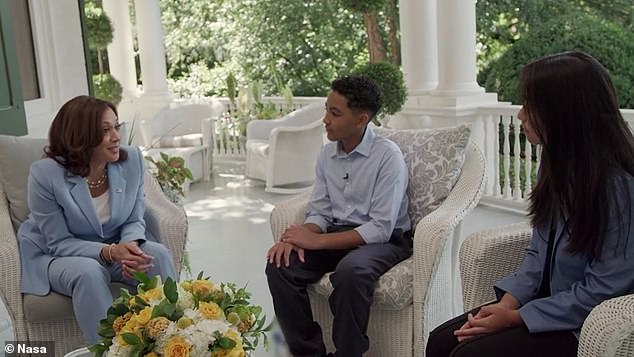 But the President is basking in approval sunshine compared to his deputy.

This makes her the least popular vice-president at this stage of an administration for half a century.

Her predecessor Mike Pence was above 40% approval after the same period in office, despite the tsunami of anti-Trump rage that followed his election.

Even Dick Cheney, the most loathed VP in history, polled better (30%) despite driving the US into two bitterly controversial wars and accidentally shooting a friend while quail-hunting. 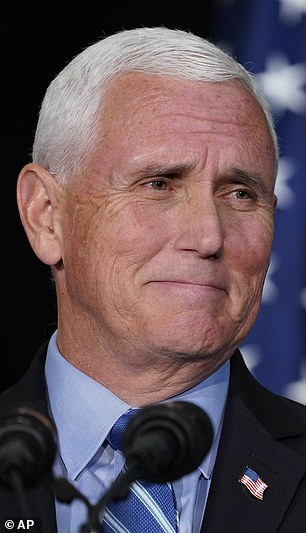 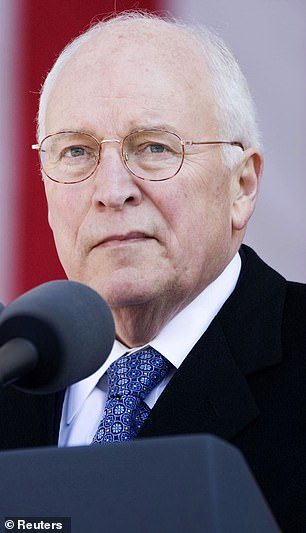 Harris is the least popular vice-president at this stage of an administration for half a century. (Left: Mike Pence was above 40% approval after the same period in office) (Right: Cheney, the most loathed VP in history, polled better than Harris at this point in the Bush administration

Yet it was never supposed to be like this.

Biden chose Harris as his No. 2 because she was a historic candidate (the first female to be VP, and first African American and Asian to hold the position) that would thrill and energize the progressive arm of his party.

And the unspoken plan was that he would serve a first time, sort out all the mess after the chaos of Trump, and then, in his 80s, hand the torch to this far younger, legal eagle deputy so she could become America’s first woman president.

Right now, that seems about as likely as me becoming the first British president.

But the only real surprise is that anyone’s really surprised.

Harris’s own presidential campaign in 2019 was so bad that it didn’t even last into election year.

She blamed lack of finances, and subliminal voter racism and sexism, but it was lack of charisma, good policies and political acumen that turned off voters.

(If her skin colour was a problem, why did Barack Obama win two terms as president?).

Her performance as VP has been equally lackluster and unimpressive.

Harris was put in charge of combatting America’s immigration issues but has been M.I.A. as the Southern border descended into a dangerous new crisis.

She boasted of being the last one in the room when Biden made his decision to leave Afghanistan but wasn’t quite so keen to co-own the decision when America’s sudden withdrawal turned into a deadly fiasco.

She’s also been dubbed the ‘Invisible Woman’ – declining to hold a single press conference as VP and not doing a major interview for over 150 days since her disastrous encounter with NBC’s Lester Holt in which she said she’d been down to the border, only for Holt to remind her that she hadn’t.

‘And I haven’t been to Europe!’ she replied, excruciatingly.

Little wonder that only 23% of Americans approve of the way the border situation’s being handled.

The most damning of many awful numbers in this new poll is that when asked to name the one thing Americans most want President Biden to do in the next year, the biggest answer by far (20%) was ‘resign/retire/quit.’ 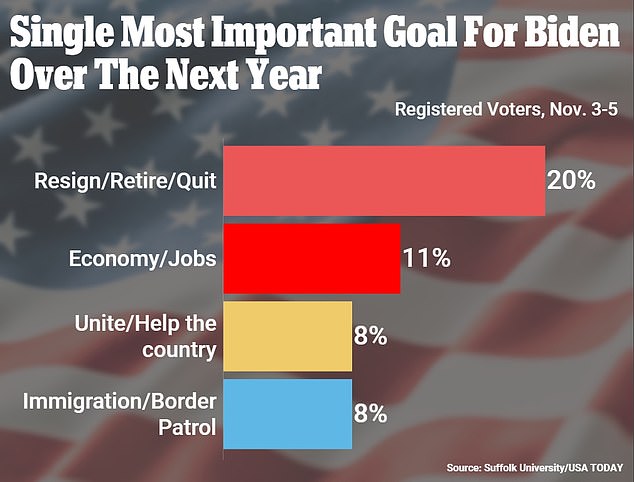 The most damning of many awful numbers in this new poll is that when asked to name the one thing Americans most want President Biden to do in the next year, the biggest answer by far was ‘resign/retire/quit’

That got twice as big a response as fixing the economy.

President Biden’s presidency is not yet a year old but is already in deep trouble thanks to surging inflation, chaotic supply chains, the botched Afghanistan withdrawal, the ongoing COVID crisis, and an insanely woke agenda that’s led to parents who dare to complain about their kids being taught critical race theory being dubbed domestic terrorists.

The US public showed their disgust in last week’s election results like the Virginia governor race where an established Democrat was unceremoniously unseated by a new-boy Republican who seized on the PC education nonsense to win a shock victory.

Since Biden and his party show no sign of having learned lessons from Virginia or the polls, there will be plenty more where that came from in next year’s midterms, when I strongly suspect the Democrats will get a shellacking and lose the House.

But the Democrats have got an even bigger nightmare to worry about and that’s the 2024 Election. 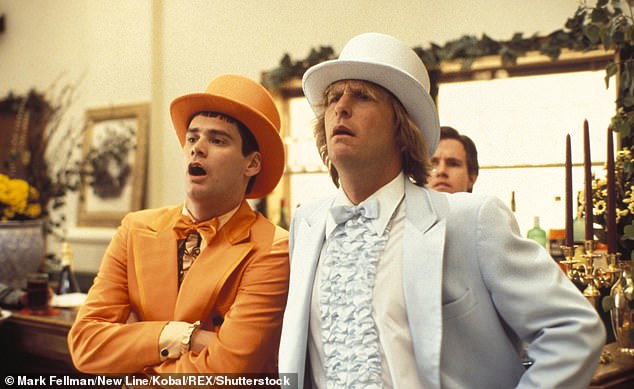 I regret to say that President Joe Biden and his Vice-President, Kamala Harris are fast becoming the political equivalent of Lloyd Christmas and Harry Dunne.

As things stand, Biden hasn’t got a prayer of re-election unless he starts to show the kind of dynamic leadership that’s so far proved woefully beyond him.

All the upbeat rhetoric he spewed so confidently about healing the nation from the turbulent Trump years has turned out to be a load of hot air.

On top of that, how credible will the already-doddery president with clear cognitive issues, who will be almost 82 years old on election day, be as a candidate?

No wonder the USA Today/Suffolk University poll, two thirds of Americans say they don’t want him running again including 28% of Democrats and many of the independents who helped elect him in 2020.

On the other hand, any succession plan that involves Kamala Harris is now a total non-starter.

As Joe Concha put it on Fox News: ‘If you’re the Democratic Party how could you possibly put her up as the nominee right now when not even three in 10 Americans approve of the job she’s doing and it’s impossible to find her?’

So, if the Democrats want to retain the White House in 2024, they need to find someone who can win it for them. And they need to start looking now.

That doesn’t look like being Joe Biden, and it definitely won’t be Kamala Harris.

Theoretically they could both stay in office until 2024 while a new field of Democrat candidates fought it out for the nomination. But what would stop Kamala running too?

The Constitution doesn’t allow Biden to fire Harris personally, but he and the Democrat leadership can engineer the removal of a vice-president who has proven to be completely out of her depth and a perilous threat to the Party’s electoral chances.

He could then appoint a new voter-friendly moderate VP who could use the platform to not only have a better chance of beating the GOP candidate next time round but lend some excitement and luster to this already-exhausted looking administration as well.

Whether the current woke-crazed Democratic party is capable of navigating its internal sexual and racial politics to land on such a happy candidate is, to be honest, a pretty big question.

But if Biden doesn’t, and the pair of them stubbornly insist on either fighting the 2024 presidential race together, or having Harris as the presidential nominee, then we may see a repeat of the scene from Dumb and Dumber where Lloyd Christmas opens a champagne bottle at a fundraising event to save endangered Snowy Owls, only for the flying cork to kill one of two Snowy Owls in a display cage – horrifying guests, and further endangering the species.

Keke Palmer Asked Whoopi Goldberg For a Role in Sister Act 3, and I'm Pretty Sure She Got the Job! 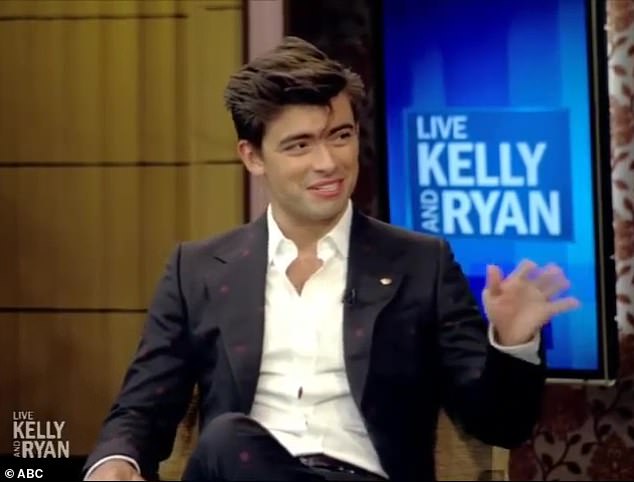 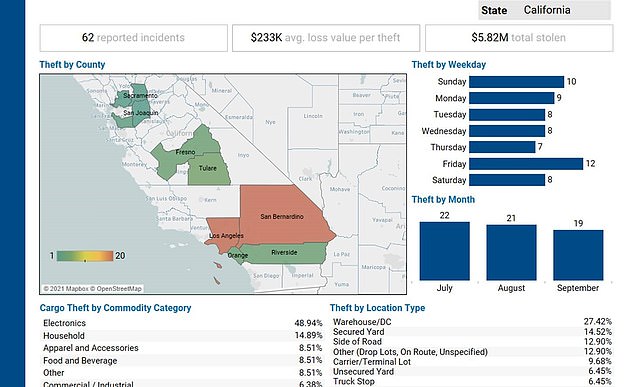 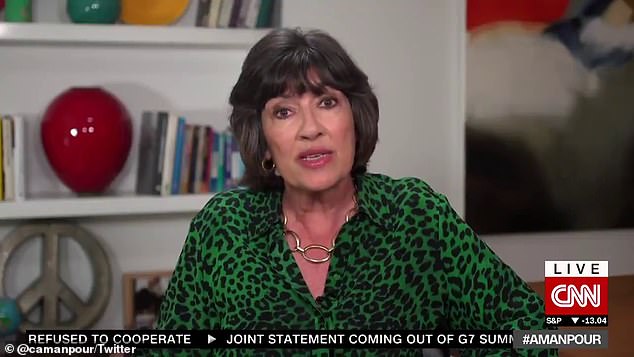