Armando Manuel Caballero, 27, was found dead by apparent suicide on Monday morning. He was a ‘person of interest’ in the disappearance of Miya Marcano and allegedly broke into her apartment just before she vanished

A maintenance worker who was a ‘person of interest’ in the disappearance of 19-year old Florida college student Miya Marcano has been found dead in his apartment of an apparent suicide.

Armando Manuel Caballero, 27, allegedly broke into Marcano’s apartment just before she vanished and left behind signs of a violent struggle, including bloodstains on a pillow.

Caballero also had a ‘romantic interest’ in Marcano, which she ‘repeatedly rebuffed,’ Orange County Sheriff John mina said at a press conference on Monday.

‘He had been dead for quite some time to my understanding,’ Mina said. Caballero’s car, a silver Ford Fusion, was found outside his apartment in Seminole County and has been taken by police as part of their investigation.

Meanwhile, Marcano remains missing and her family is pleading for any help the public could offer in finding her. ‘Her disappearance is suspicious and our detectives and the family members suspect foul play,’ Mina said.

Marcano, who attends Valencia College, lives and works at the Arden Villas apartment complex in Orlando Florida and was last seen finishing her shift there at around 5pm on Friday, police said. Her family said she was scheduled to catch a flight to Fort Lauderdale that night, but she never made it to the airport.

Detectives first interviewed Cabellero for tips as he worked in the same apartment complex as Marcano. He told police that he last saw Marcano at 3pm on Friday. However, Mina said that he had a ‘maintenance-issued master key fob,’ which was used to enter Marcano’s apartment at 4.30pm – a half hour before her shift ended and she disappeared. 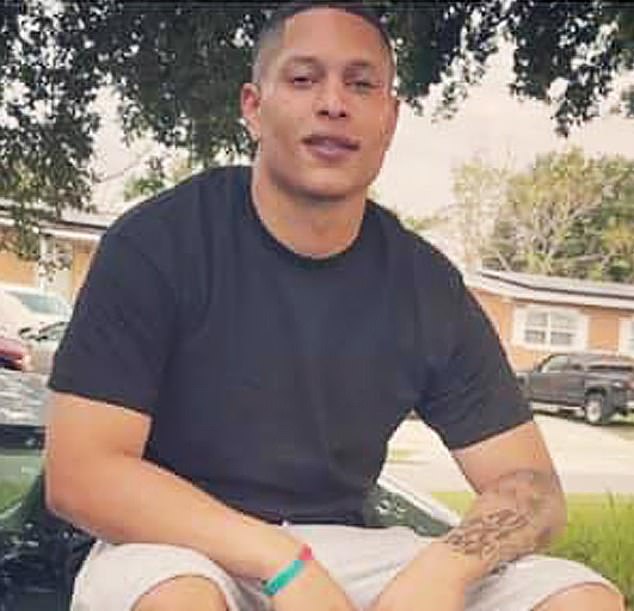 Caballero also had a ‘romantic interest’ in Marcano, which she ‘repeatedly rebuffed,’ police said 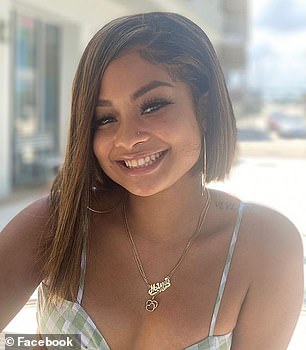 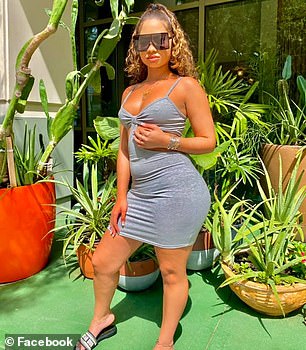 Where is Miya? Authorities in Florida are searching for 19-year-old Florida college student Miya Marcano. She was last seen at her apartment complex in Orlando on Friday 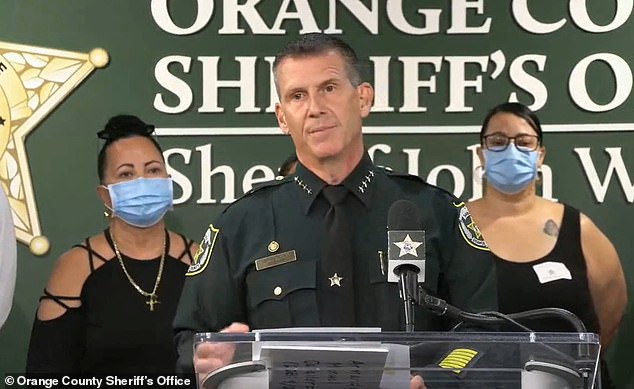 On making that discovery, police issued a warrant for Caballero’s arrest on suspected burglary as he was believed to have gone into her apartment without permission or reason. Mina added that police found a ‘few items’ that were ‘considered to be suspicious,’ but would not elaborate on what they were or if they included the blood-stained pillow.

Police were going to Caballero’s apartment to arrest him on Monday morning when they found his body inside the Camden Club Apartments in unincorporated Longwood, a suburb of Orlando.

‘Our detectives and deputies have been working around the clock on this case and pouring a lot of resources into finding Miya,’ Mina said. ‘We have at least 30 detectives who are working just this case to try and track down every single lead.’

Marcano’s family said it is unlike her to go a long period of time without texting or calling any of them. Nevertheless, they still have hopes that she is still alive. 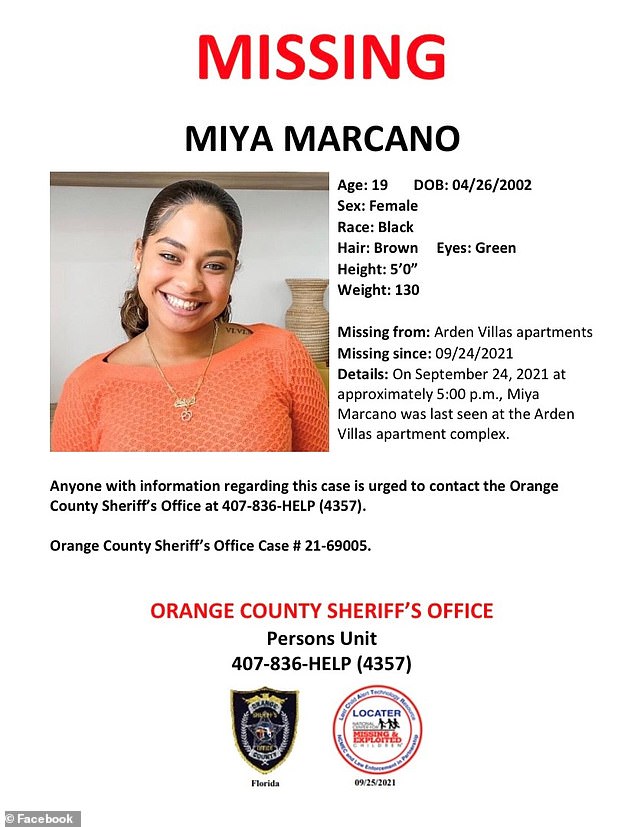 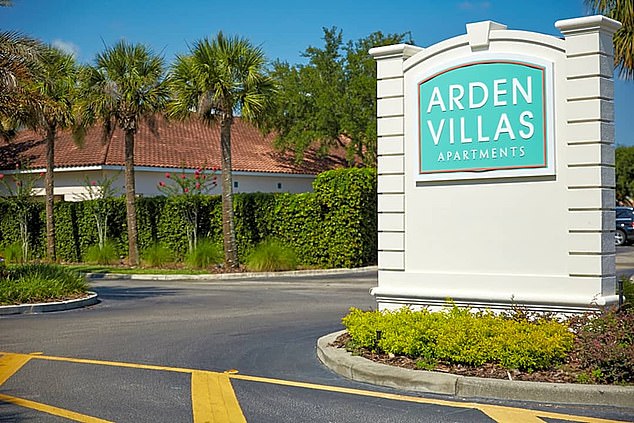 The Arden Villas apartments posted a message about Marcano’s disappearance on its Facebook page Monday morning, writing that she had last been seen in jeans, a black hoodie and a red T-shirt with a logo for Preiss Co., a company that manages student housing, including at the Arden Villas.

‘We also ask that you continue to keep Miya’s friends and [family] in your thoughts and prayers as they continue to navigate this difficult situation,” the Facebook post read.’

When deputies searched Miya’s apartment, they found that someone had blocked the door to her bedroom, reported Fox 35.

The window in the bedroom was unlocked, and the room was disarray. A bloodstain was discovered on the missing woman’s pillow, raising concerns for Marcano’s safety.

Miya’s father, local DJ Marlon Marcano, posted on social media: ‘there were signs of struggle in her apartment — and she may be in danger.’

The sheriff’s office has not said whether Marcano’s disappearance is being treated as a criminal matter. 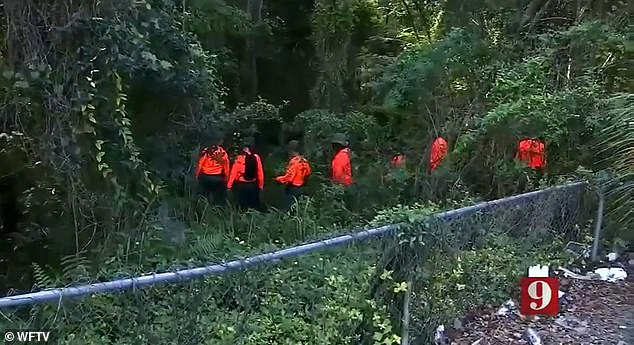 On Sunday, deputies scoured a wooded area near the apartment building in search for the missing woman 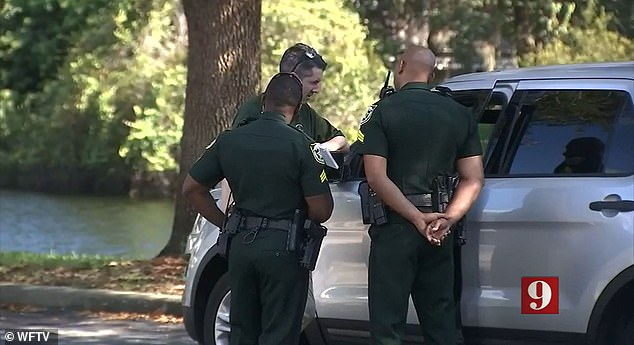 Deputies were said to have found signs of struggle inside Marcano’s unit, including blood on her pillow 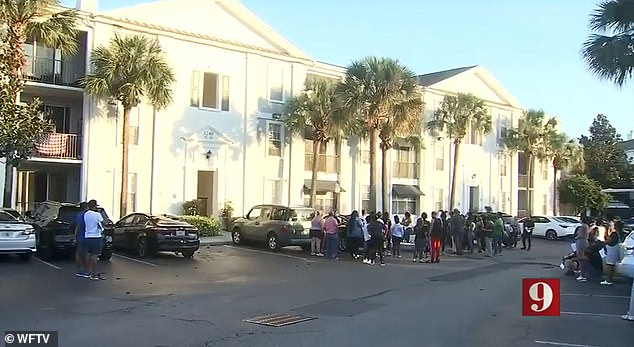 Neighbor Anastasia Holland described Miya to News4Jax as shy and friendly, but ‘on the quiet side.’

On Sunday, Miya’s family and friends held a prayer vigil outside her apartment building and begged for her safe return.

‘All we ask you is help us bring Miya home,’ said Joysue Thompson, Marcano’s grandmother. ‘Bring her home safe. Drop her off. Let us know where she is. We will pick her up. Just bring her home.’

Deputies on Sunday searched a wooded area near the apartment complex and also used a helicopter to look for clues from the air. 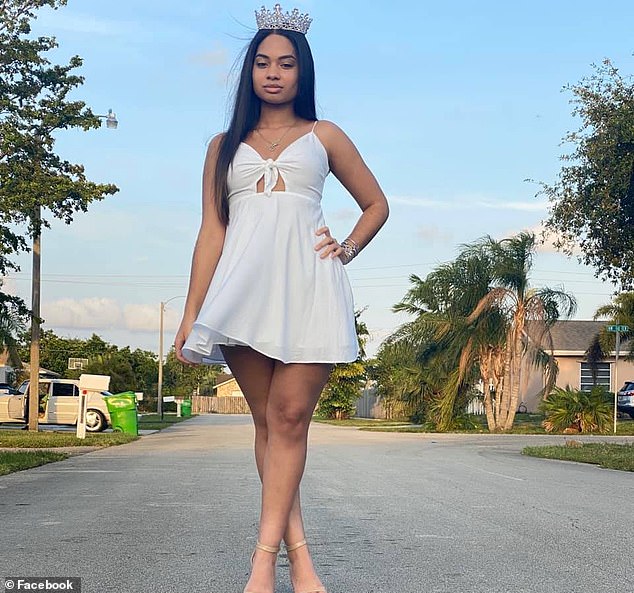 Marcano is a student at Valencia College in Orlando. She is pictured above on her 18th birthday 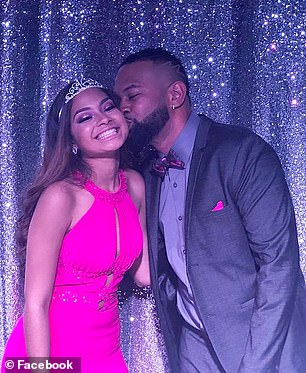 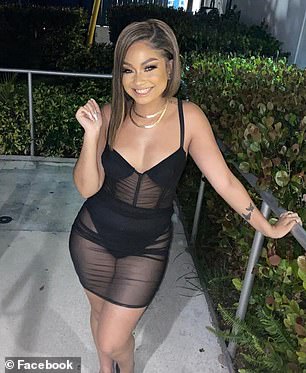 Marcano, pictured left with her father, Marlon, was set to fly out to Fort Lauderdale on Friday, but she never made it. Her dad wrote online ‘she may be in danger’ 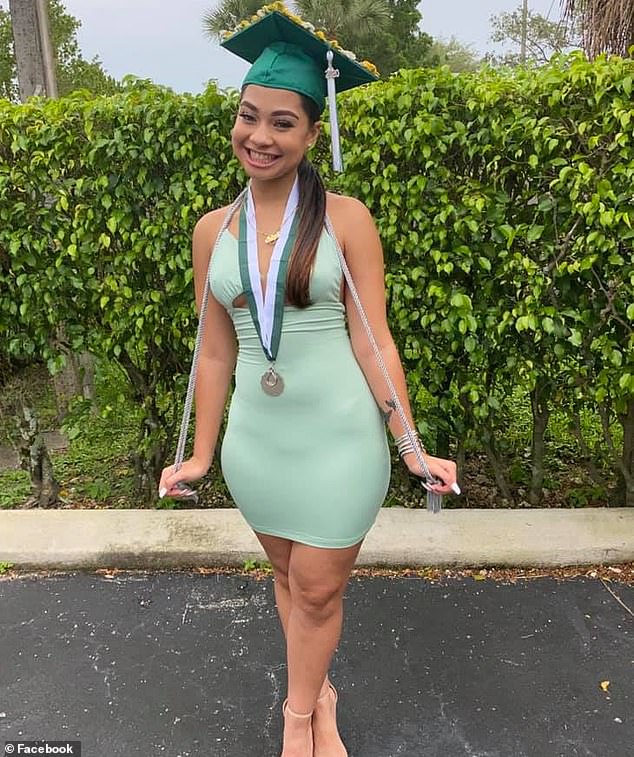 Marcano, pictured on the day of her high school graduation last year,  is 5 feet tall and weighing 130lbs, with brown hair and green eyes

Marcano’s father on Sunday posted on his Instagram page an impassioned plea addressed directly to his daughter: ‘Mimi, my heart is aching. I haven’t slept or eaten in days. Where are you baby??? Your whole family is here looking for you. We will not stop until you’re back home. I’m slowly losing my mind over here. Never have we ever gone so long without even a text message to each other. If your able to read this message, please know that your Daddy and the entire world loves you. Please don’t lose faith. We will find you…. I love you always and forever!’

Marcano is described as 5 feet tall and weighing 130lbs, with brown hair and green eyes. Anyone with information on her whereabouts is being asked to call at 407-836-4357.

Casino Online - where to play online? 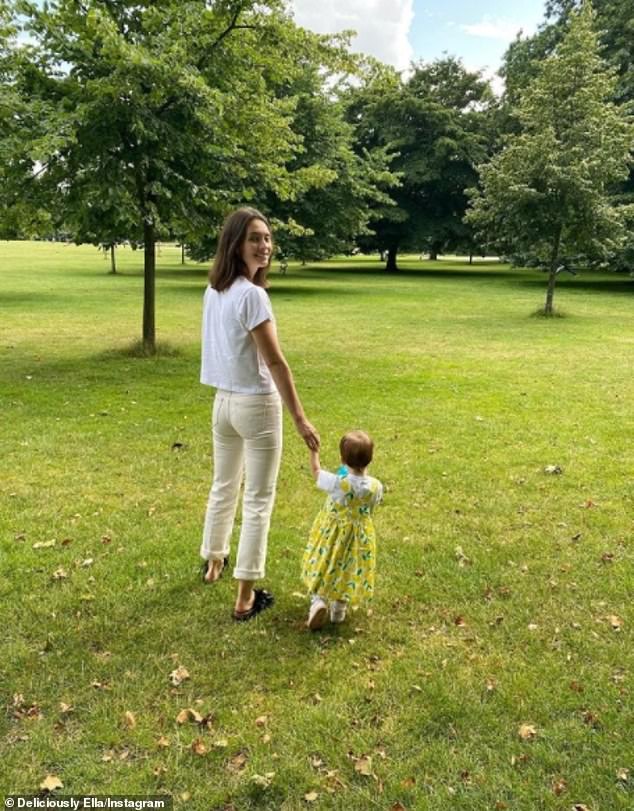 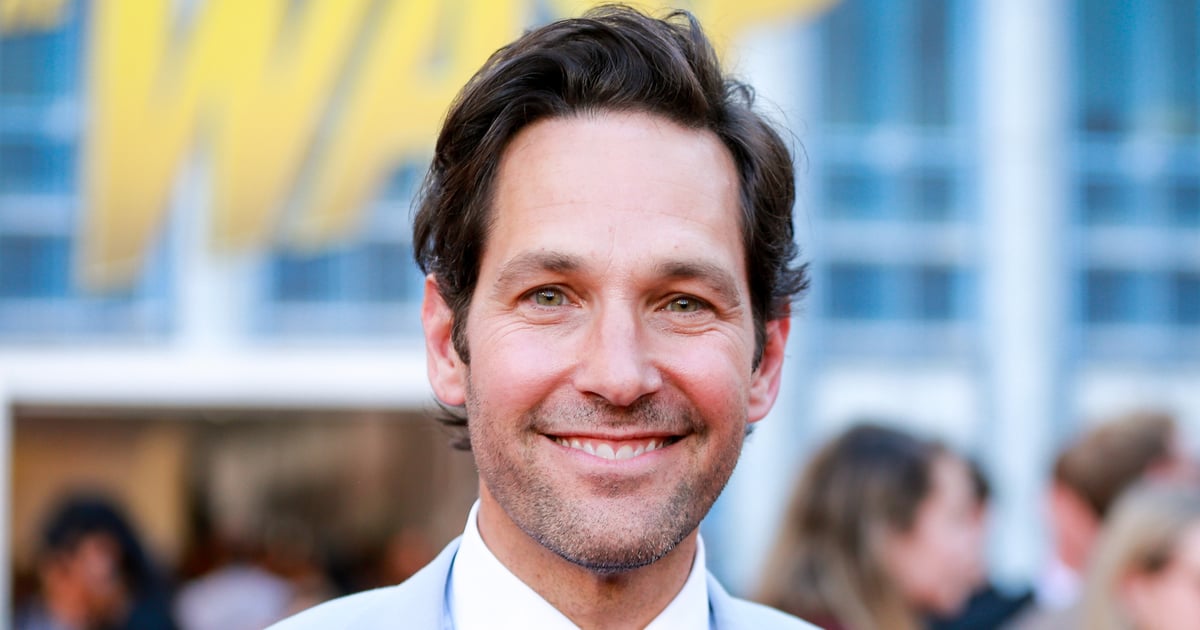 Enjoy Over 2 Decades’ Worth of Charming Paul Rudd Smirks 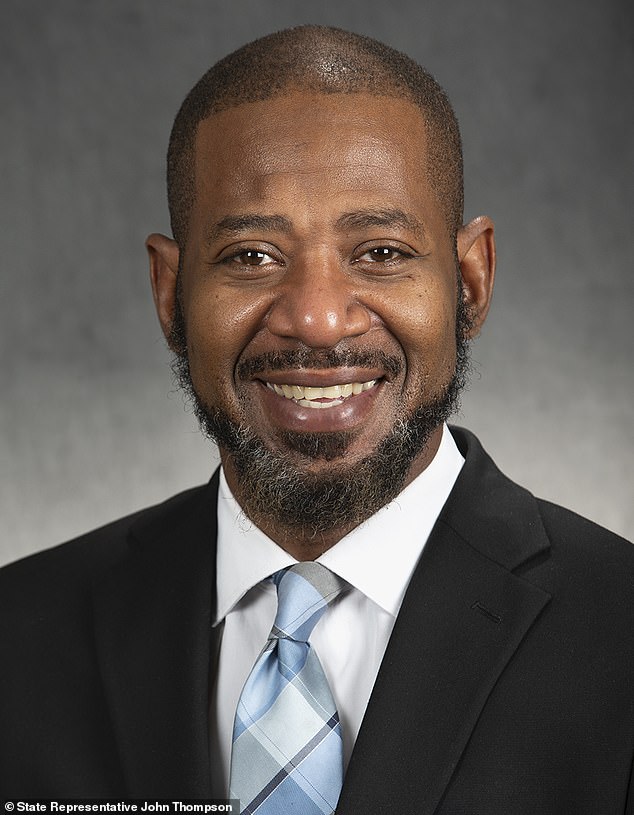 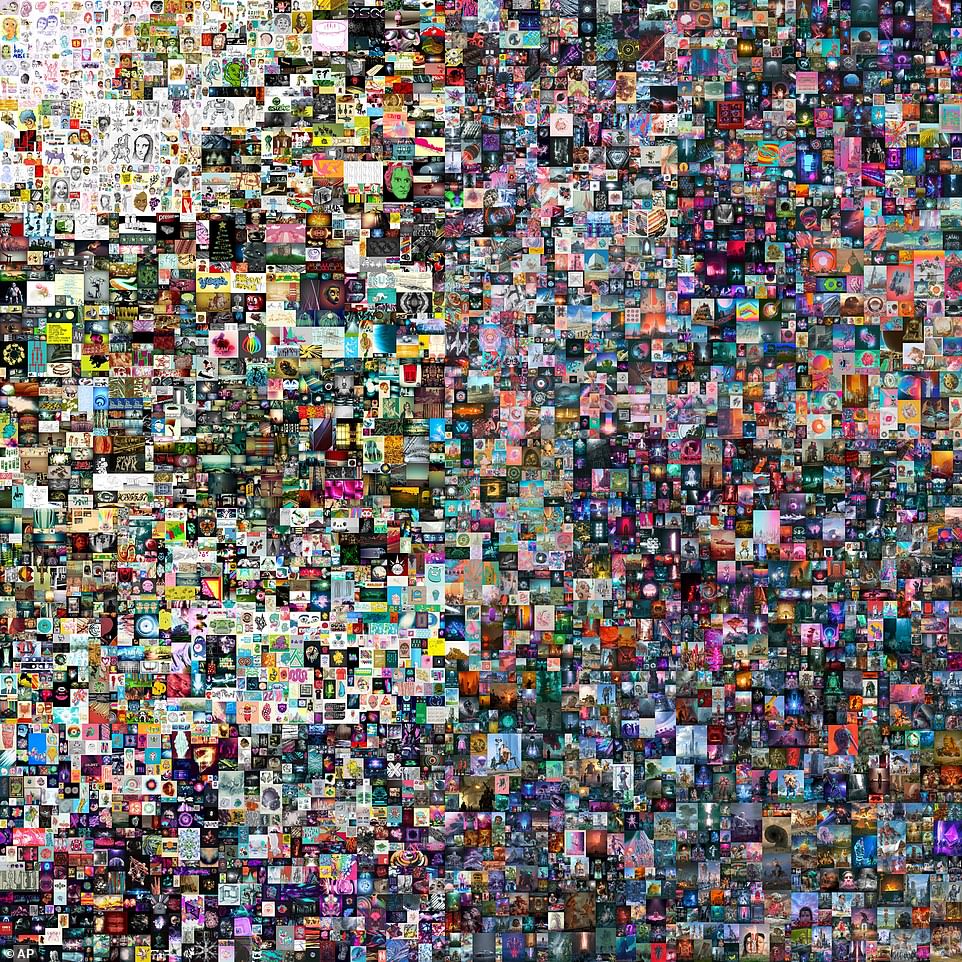