Dubbed the ‘People’s Convoy,’ a small group of truckers that rolled through Oakland to protest a lawmaker’s sponsorship of a pro-abortion bill and a Covid vaccine mandate bill, were pelted with eggs by upset residents.

California assemblywoman Buffy Wicks, 44, represents the state’s 15th District, which encompasses some well-known suburbs including Berkeley and Oakland. On Friday, her home was surrounded by police after it was targeted by a convoy of 20 drivers in 18-wheelers pressuring her to resign.

Earlier in April, Wicks, who’s held office since December 2018, sponsored a bill that would require all workers in California to receive the Covid-19 vaccine. The bill was ‘postponed’ after it faced stiff opposition from labor unions as the omicron variant crested in the heavily vaccinated state.

The Democrat stirred the pot even more after introducing another bill that would end the requirement for coroner investigations into stillbirths. It was characterized by anti-abortion commentators as ‘the most extreme anti-life bill California has ever seen, essentially legalizing infanticide.’

The convoy, which started in Adelanto, California in February, drove across the country to D.C. and is now back in California. On Tuesday it was staying near Sacramento – 81 miles away from Oakland – and planned to be there for at least a week while deciding its next move.

A ‘People’s Convoy’ of about 20 drivers protested through the streets of Oakland, California, on Friday due to two state bills providing access to abortion procedures for women and also requiring all employees working within the private sector to be vaccinated against COVID 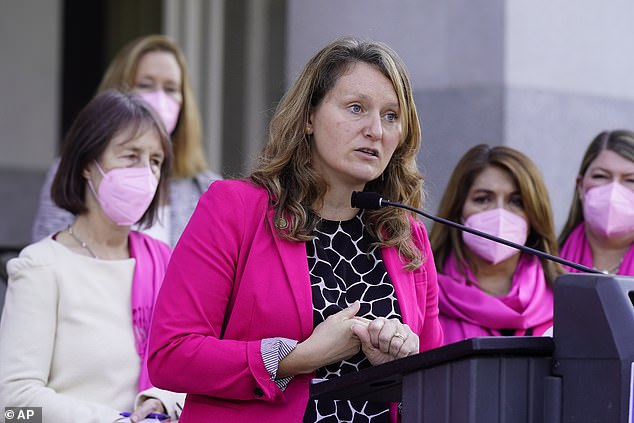 Assemblywoman Buffy Wicks, D-Oakland, introduced a bill that would protect people from prosecutions and criminalization of abortion or pregnancy loss in April. Her other bill on vaccination mandates for privately-owned COVID businesses was postponed by the state’s legislature 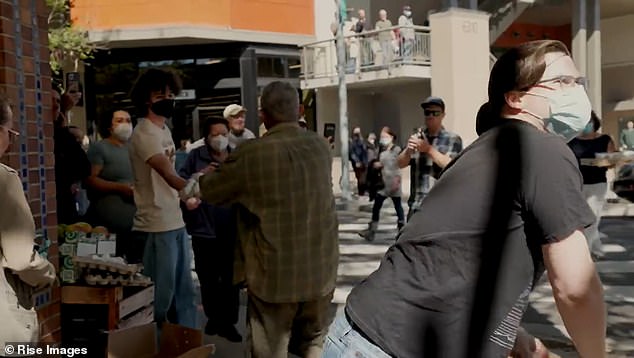 On Friday, many residents in the suburb of Oakland (pictured) threw eggshells against the convoy drivers as they attempted to make their way to Wicks’ home 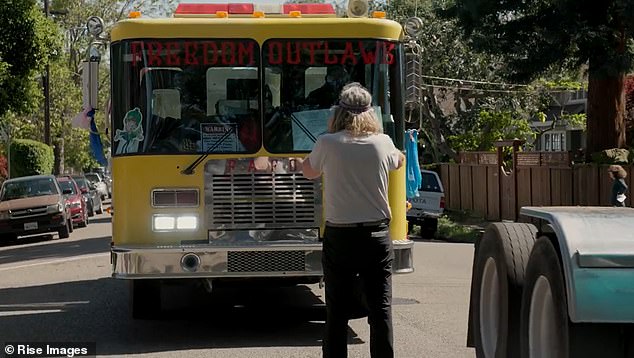 Some onlookers stood in front of the trucks. Honking noises were heard throughout the day 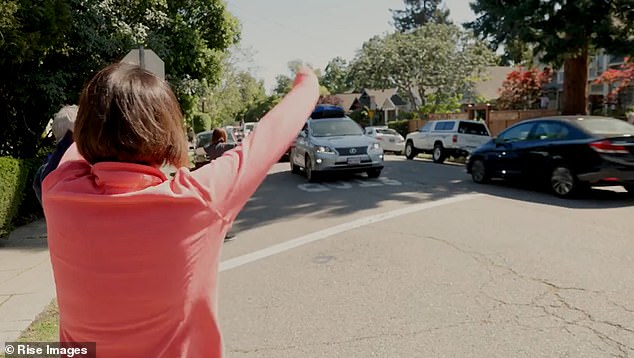 A woman gestures the middle finger to a protestor in Wicks’ neighborhood, which was protected by police

Last week’s demonstration was similar to one carried out by the People’s Convoy movement in Canada for a month between January and February. Motives for the protest were similar too, as Canadian truckers were opposing COVID-19 vaccine mandates.

Footage from Friday shared online by Rise Images shows residents and truck drivers clashing in the San Francisco suburb while the sounds of horns never ceases to erupt from every street.

‘People have come from all over the United States to fight for your freedom,’ a man told one of Wicks’ neighbors while filming the protest on the streaming platform Twitch. He then pointed out a truck on the street with a Minnesota license plate, which had attended the demonstration, emphasizing his claim that drivers nationwide reassembled for the occasion.

The convoy stayed around Wicks’ neighborhood for a little more than an hour before going to other parts of the area. None of the participants was arrested or cited, according to California Highway Patrol and the Oakland Police Department.

A spokesperson for Wicks told news outlets that the assemblywoman would be ‘off the grid as far as communication goes’ for the foreseeable future.

‘Bullhorns and loud trucks lend no legitimacy to baseless conspiracy theories from out of state protestors, and Asm. Wicks will not indulge any attempts to influence her legislative work through harassment and intimidation tactics — especially when it’s directed at her home and her family,’ Erin Ivie, a spokeswoman for Wicks’ office, wrote in an email sent out over the weekend.

Truck drivers participating in the Oakland convoy incessantly blasted their horns while making their way past the city’s Safeway on College Avenue near Wicks’ home.

They were denied access from certain streets, though, where they were greeted by irritated onlookers. Some of them threw eggs at the trucks from local supermarkets and repeatedly yelled: ‘Get out of our town!,’ at the drivers, who got out of their trucks to confront them. 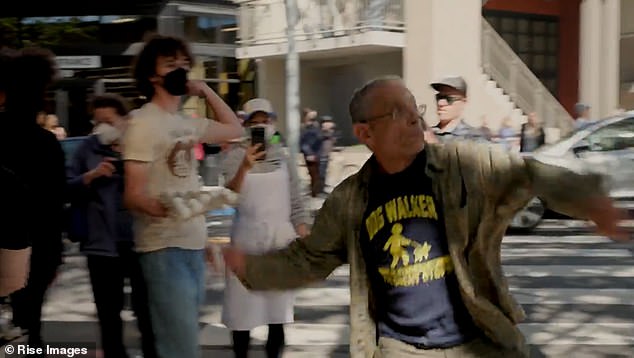 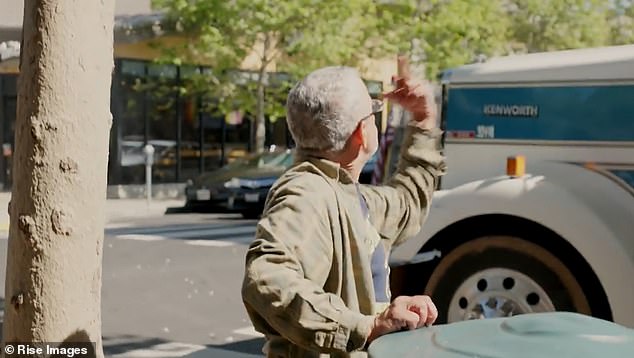 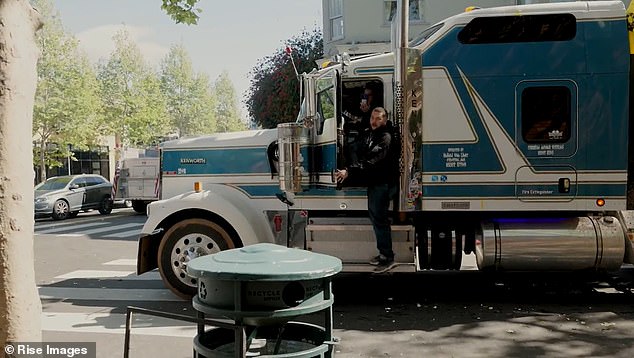 ENOUGH IS ENOUGH: A driver was caught on tape exiting his truck after he said that his 18-wheeler was ‘vandalized’ by counter protestors 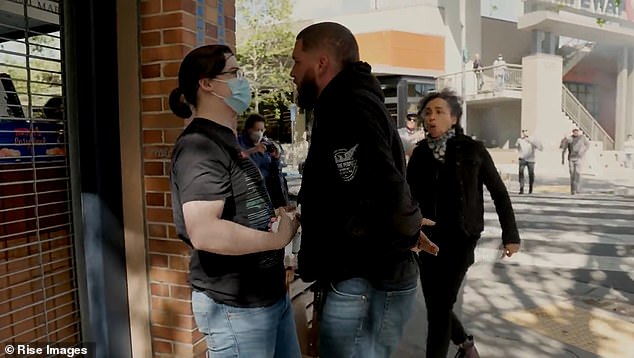 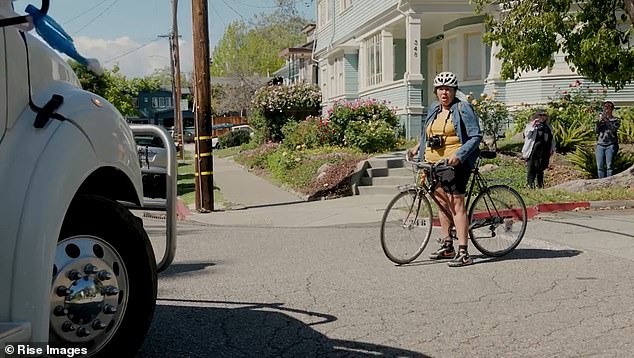 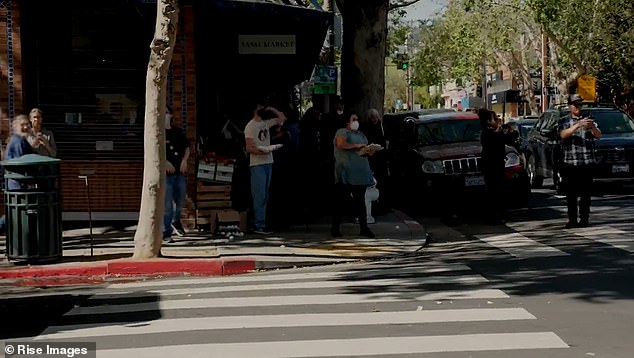 People gathered around a local market on a street in Oakland to throw eggshells at truck drivers, some of whom came from different parts of the country on Friday to be part of the demonstration

Later, some residents stood in front of several trucks while gesturing at them, as loud honking noise continued to prevail around the sunny neighborhood.

‘This is not freedom — you are a disturber,’ one woman said while clashing with a Twitch streamer, whose YouTube channel, WYSIWYGTV, shares ‘unedited conversations with real people for you to make up your own mind,’ according to its description.

In other videos circulating online, some protesters refer to Wicks’ bill as assisting with ‘infanticide.’

In fact, the bill, which has not yet been approved by the state Legislature, protects women from being criminally charged when carrying out abortions, or when they experience a miscarriage or stillbirth. Rather, the bill seeks to protect parents from legal prosecution if that perinatal death is the result of accidental causes, she said.

Farah Diaz-Tello, J.D., Senior Counsel & Legal Director at If/When/How: Lawyering for Reproductive Justice, told Reuters, ‘The bill as written reinforces existing California law that protects people from being criminalized based on an accusation that something they did or did not do during pregnancy caused a certain pregnancy outcome.’

She said that as written the bill ‘acknowledges, as do many other statutes across the country prohibiting criminalization of pregnancy outcomes, that sometimes an incident that occurs during pregnancy leads to the loss of the baby after it is born.’

Wicks’ representative reiterated the ‘overall intention of the bill is to ensure that no one in the State of California is investigated, persecuted or incarcerated for ending a pregnancy or experiencing pregnancy loss’. 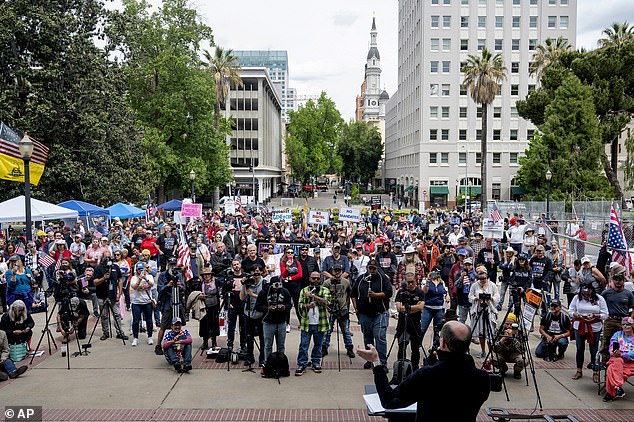 Meanwhile, Wicks’ other bill on establishing a COVID-19 vaccination mandate for all businesses in the private sector in the surrounding area was postponed.

However, drivers on Friday put several phrases and slogans on their trucks with the phrase, ‘We the People’ and shouted ‘Freedom!’ as they surrounded Hicks’ home,  building up traffic.

‘We are U.S. citizens, we believe in the Constitution and your legislations are a direct assault on the freedoms of this country!’ one protester yelled out of a megaphone to local residents, who reacted with a chorus of boos.

The protest comes as average daily COVID-19 cases and hospitalizations are continuing to fall in the U.S., an indicator that the omicron variant’s hold is weakening across the country, and mandates are being loosened or lifted.

Public health experts said they feel hopeful that more declines are ahead, but many worry U.S. vaccinations remain below expectations, concerns that are exacerbated by the lifting of COVID-19 restrictions. 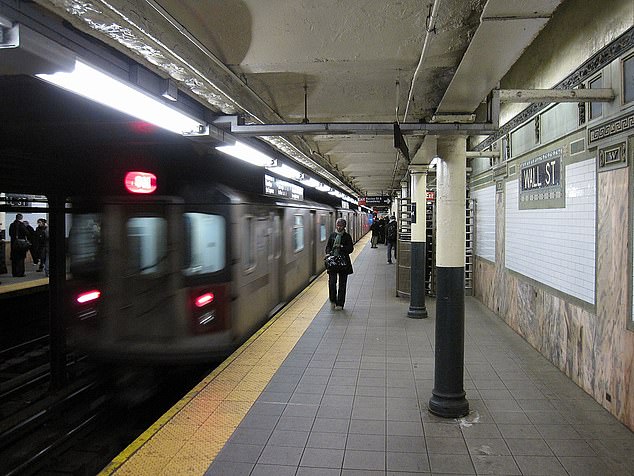 Commuter, 40, is slashed in the neck with a boxcutter on NYC subway 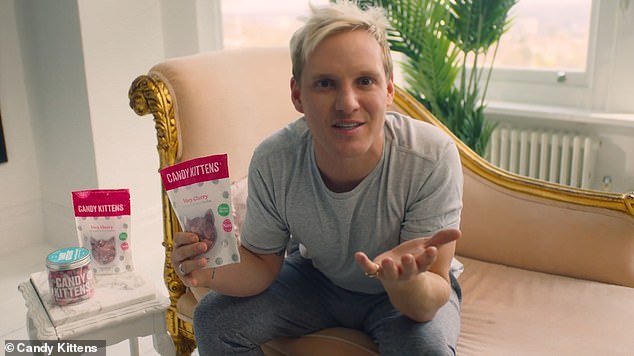 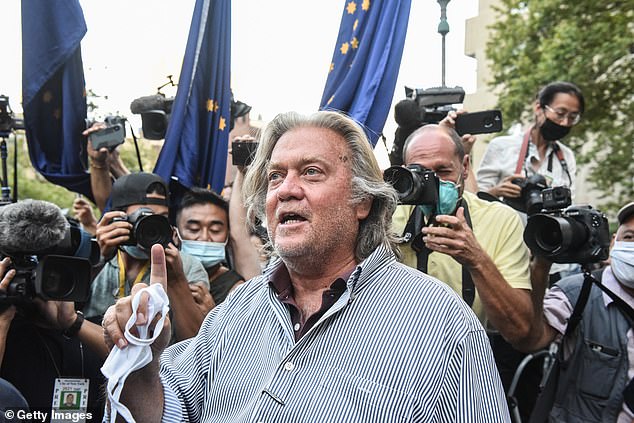 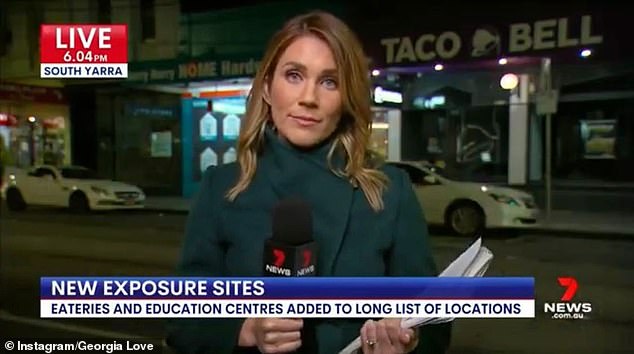