The US military is making rapid progress in COVID-19 vaccinations after Secretary of Defense Lloyd Austin mandated the shots last month.

As of Friday, 93 percent of the country’s 1.4 million active-duty service members had at least one shot, meaning about 97,000 were still unvaccinated, Pentagon spokesman John Kirby said on Friday.

‘We are seeing, as we expected to see, our troops do what is expected of them,’ Kirby said at a press briefing.

It compares to 82 percent of active-duty service members who had at least one shot in early September, according to a Stars and Stripes interview with Lt. Gen. Ron Place, head of the Defense Health Agency.

The Pentagon directed an inquiry on Tuesday from DailyMail.com to a Defense Department dashboard which does not break out vaccine rates among active-duty troops from reservists and National Guard.

Secretary of Defense Lloyd Austin announced the vaccine mandate in an August 24 memo, but different service branches have their own deadlines 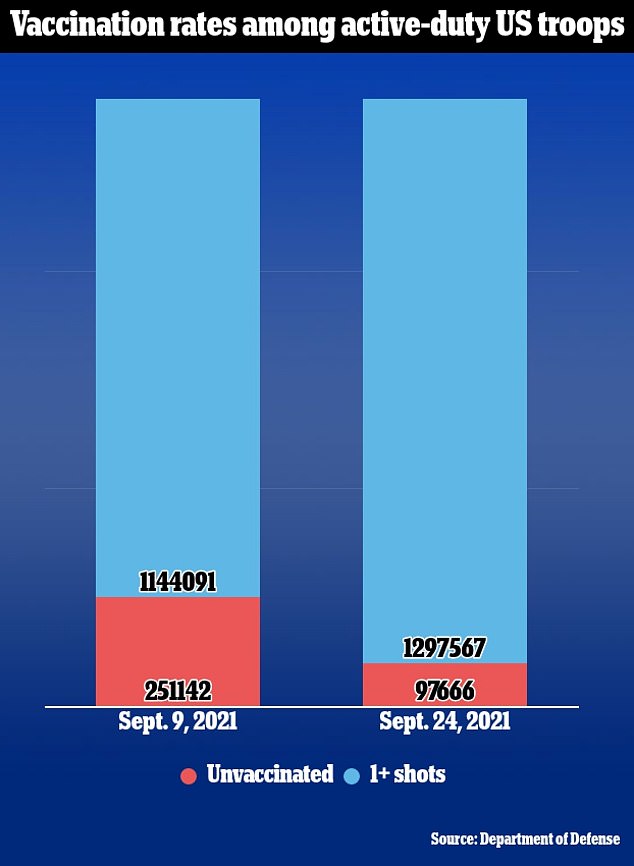 According to the dashboard, which will be updated on Wednesday, 73 percent of all troops have received at least one shot, when reservists and guardsmen are included in the total force strength of 2.2 million.

The various service branches began requiring unvaccinated service members to get the FDA-approved Pfizer vaccine following Secretary Austin’s August 24 memo, which mandates shots even for those who have recovered from a prior infection.

Each service branch has set its own deadline for troops to get the required vaccine, and all are allowing some exemptions for medical, religious, or administrative reasons.

The Air Force and Space Force have set a November 2 deadline for active-duty airmen and guardians to be fully vaccinated, while sailors and Marines have until November 28.

Kirby said at Friday’s briefing that Austin wanted to see the mandate implemented ‘in a compassionate way, in a thoughtful way.’ 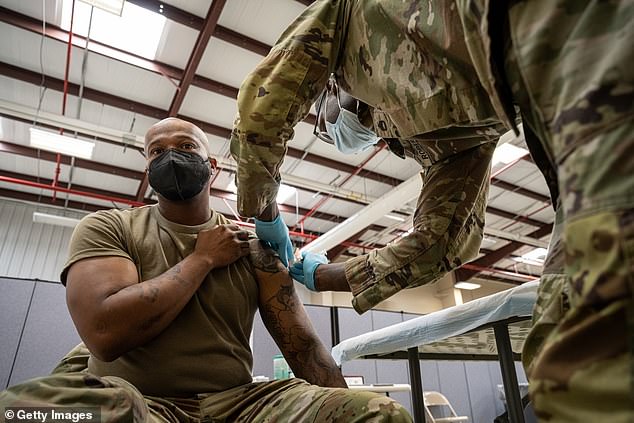 A soldier receives a COVID vaccine on September 9 at Fort Knox, Kentucky. The Army will require all active-duty soldiers to be vaccinated by December 15

‘Violating a lawful order doesn’t automatically jump you to a dishonorable discharge — I mean, it depends on the order,’ he said when asked about potential disciplinary measures for those who refuse vaccines.

‘Commanders have a range of tools available to them, short of using the Uniform Code of Military Justice, short of disciplinary action, to help individuals make the best decision, the right decision for themselves, for their families, and for their teammates,’ said Kirby.

The Army has said that officers who refuse to be vaccinated against coronavirus could be suspended from their duties and possibly discharged.

Commanders, command sergeants major, first sergeants and officers in Command Select List positions who refuse to be vaccinated and are not pending an exemption request would face suspension and relief if they refuse to comply, the Army said.

‘While soldiers who refuse the vaccine will first be counseled by their chain of command and medical providers, continued failure to comply could result in administrative or non-judicial punishment – to include relief of duties or discharge,’ the Army said in a statement earlier this month.

‘This is quite literally a matter of life and death for our soldiers, their families and the communities in which we live,’ U.S. Army Surgeon General Raymond Scott Dingle said, citing concern over the spread of the highly contagious Delta variant.

However, the mandates have drawn backlash from some, including a flurry of calls on social media for service members to seek exemptions, particularly if they have already recovered from COVID-19. 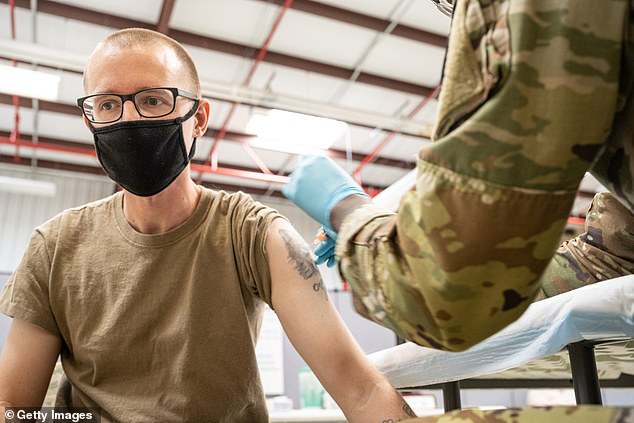 An Army soldier gets vaccinated earlier this month. The Army has said that officers who refuse to be vaccinated against coronavirus could be suspended and possibly discharged

During his diatribe, Carlson condemned the requirement as ‘dishonest’ and a ‘political purity test’ – and accused military officials of ‘brainwashing’ soldiers hesitant to the get the jab.

Carlson then asserted: ‘The point of mandatory vaccination is to identify the sincere Christians in the ranks, the freethinkers, the men with high testosterone levels, and anyone else who doesn’t love Joe Biden, and make them leave immediately.’

‘It’s horrifying,’ Carlson added of the military mandate. ‘If you loved the country, you would not do this.’

According to the DoD dashboard, 52 service members have died from COVID-19, and 2,197 have been hospitalized, out of the 2.2 million active duty, reserve and Nation Guard troops. 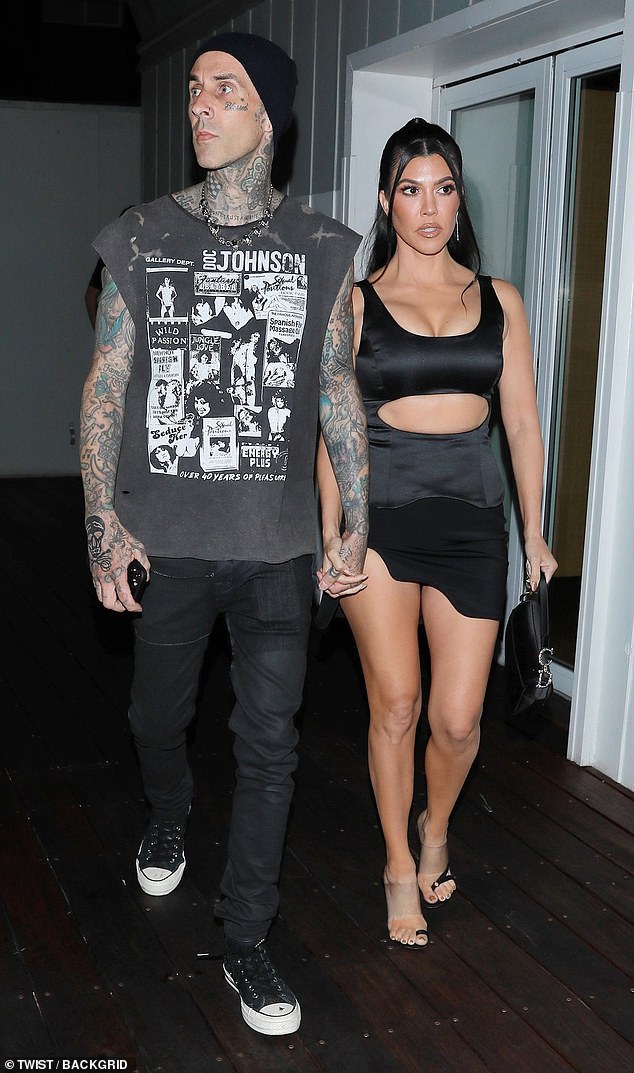 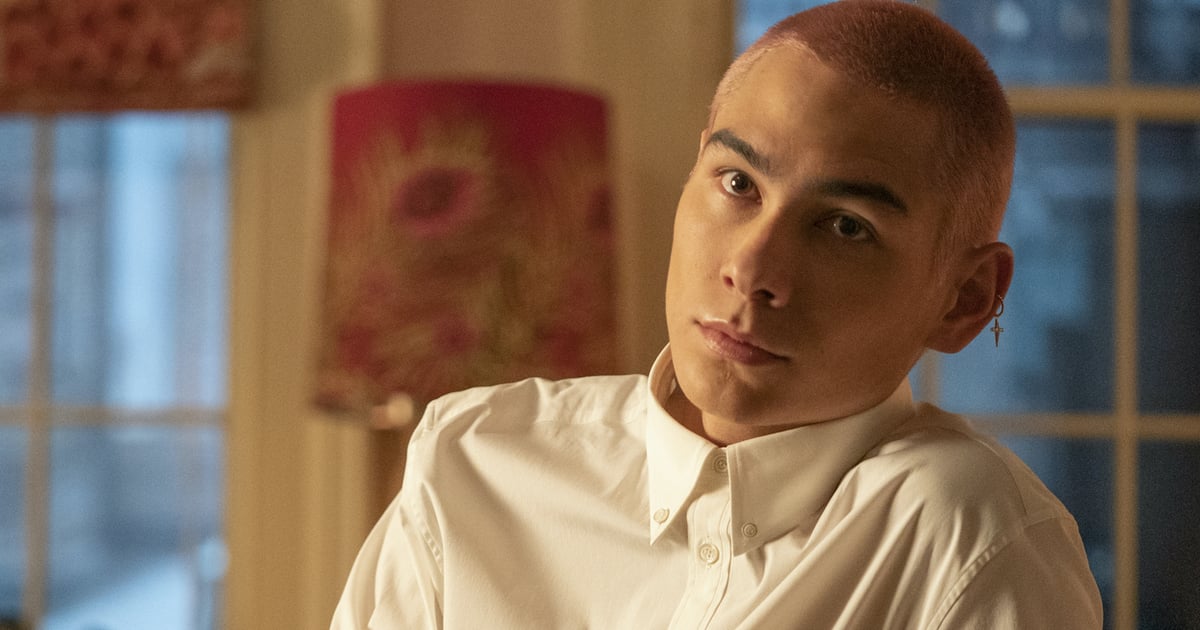 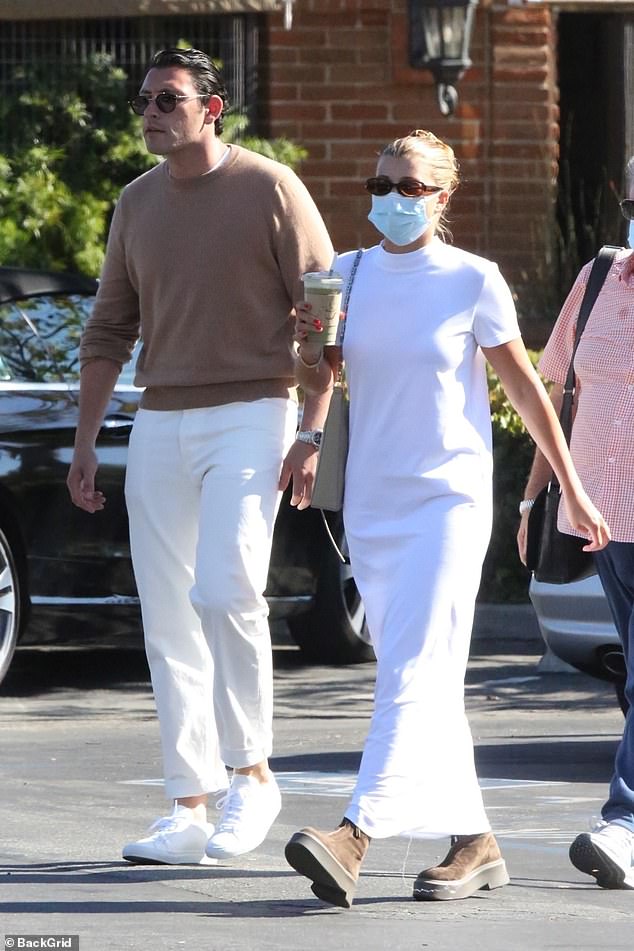 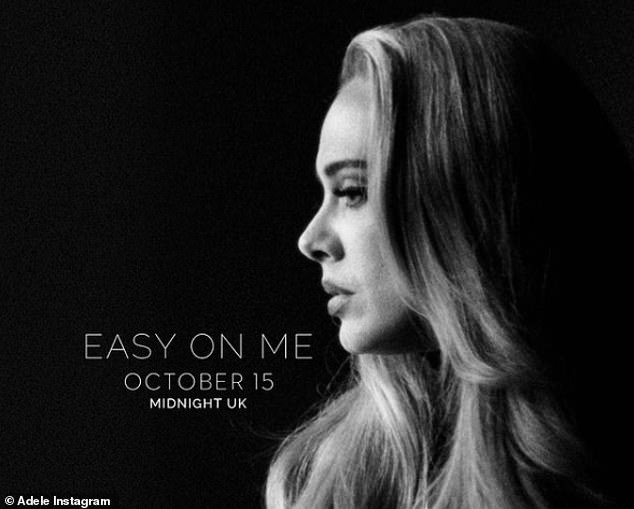 Critics rave over Adele’s ‘sublime’ comeback single Easy On Me

October 15, 2021
Check Also
Close
Recent Stories
Featured Posts
How Much Could You Win Betting on Big Sports Blowouts?
1 hour ago