A recovery operation to identify the remains of war heroes who died at Pearl Harbor has come to an end ahead of the 80th anniversary of the attack.

Brothers Leo and Rudolph Blitz, just 16 when they signed up, were so young their father had to go to the recruiting office in Omaha to give his permission.

They enlisted in May, 1938 and were killed just three years later when their ship, the USS Oklahoma, was sunk by Japanese torpedoes during the surprise attack on Pearl Harbor that left 2,335 American troops dead.

For 78 years, they were buried with other unidentified sailors from the Oklahoma at a cemetery in Hawaii.

But in 2019, forensic investigators from the Pentagon were able to identify the twins as part of a project to name all of the warship’s unknown casualties.

The Defense POW/MIA Accounting Agency (DPAA) is finally closing down the project after identifying the Blitz twins and almost 400 more Oklahoma sailors over the last four years.

On Tuesday, marking the 80th anniversary of the surprise attack that brought the US into WWII, the last of the remains that could not be identified will be reburied in Honolulu’s National Memorial Cemetery of the Pacific known as the ‘Punchbowl.’

Among those returning to Hawaii to mark the anniversary is 101-year-old David Russell who – unlike the Blitz twins – managed to escape the Oklahoma.

Brothers Leo and Rudolph Blitz were just 16 when they signed up that their father had to go to the recruiting office in Omaha to give his permission. They enlisted in May, 1938 and were killed just three years later when their ship, the USS Oklahoma, was sunk by Japanese torpedoes during the surprise attack on Pearl Harbor that left 2,335 American troops dead. 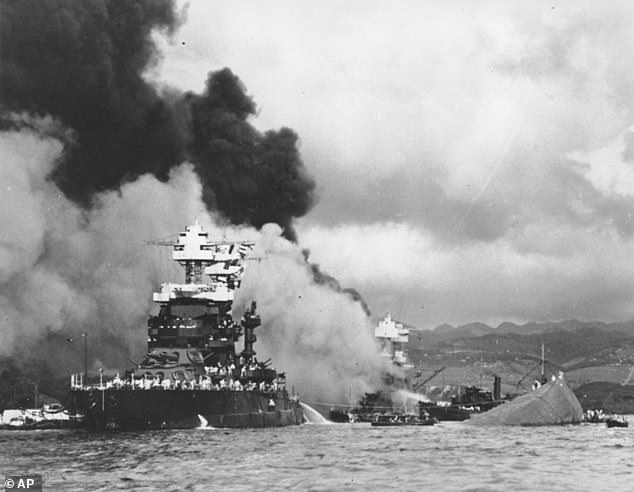 The Defense POW/MIA Accounting Agency (DPAA) is finally closing down the project after identifying the Blitz twins and almost 400 more Oklahoma sailors over the last four years (pictured: the hull of the capsized Oklahoma is seen on the right as the battleship USS West Virginia, center, begins to sink after suffering heavy damage on December 7, 1941) 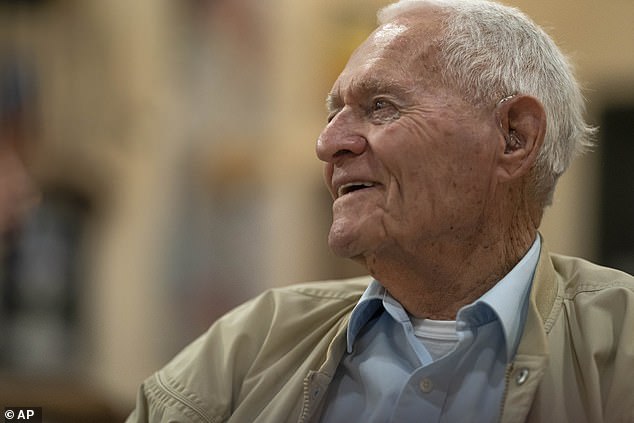 But a split-second decision on that morning changed his mind, and likely saved his life.

‘They started closing that hatch. And I decided to get out of there,’ Russell said in an interview with the AP.

Within 12 minutes his battleship would capsize under a barrage of torpedoes.

Altogether 429 sailors and Marines from the Oklahoma would perish – the greatest death toll from any ship that day other than the USS Arizona, which lost 1,177.

Russell is returning to Pearl Harbor on Tuesday for a ceremony in remembrance.

About 30 survivors and 100 other veterans from the war are expected to observe a moment of silence at 7:55 a.m., the minute the attack began.

Survivors, now in their late 90s or older, stayed home last year due to the coronavirus pandemic and watched a livestream of the event instead.

He recalls heading topside when the attack started because he was trained to load anti-aircraft guns and figured he could help if any other loader got hurt.

But Japanese torpedo planes dropped a series of underwater missiles that pummeled the Oklahoma before he could get there. Within 12 minutes, the hulking battleship capsized.

Russell clambered over and around toppled lockers while the battleship slowly rolled over.

‘You had to walk sort of sideways,’ he said.

Once he got to the main deck, he crawled over the ship’s side and eyed the USS Maryland moored next door.

He didn’t want to swim because leaked oil was burning in the water below.

Jumping, he caught a rope hanging from the Maryland and escaped to that battleship without injury. 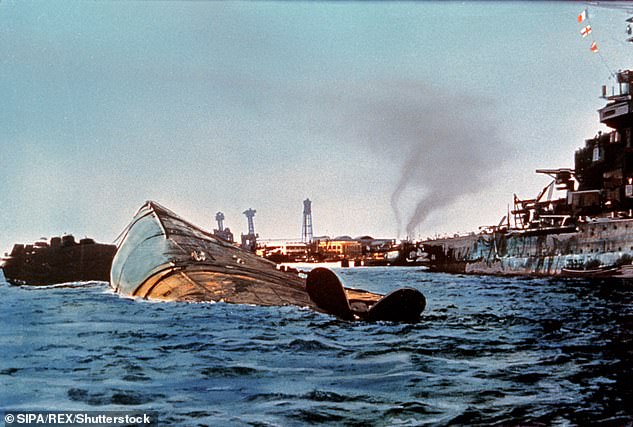 The attack on Pearl Harbor, which led to the Pacific portion of WWII with Japan, was called ‘a day which will live in infamy’ by then-US President Franklin D. Roosevelt (pictured: the Oklahoma sinks) 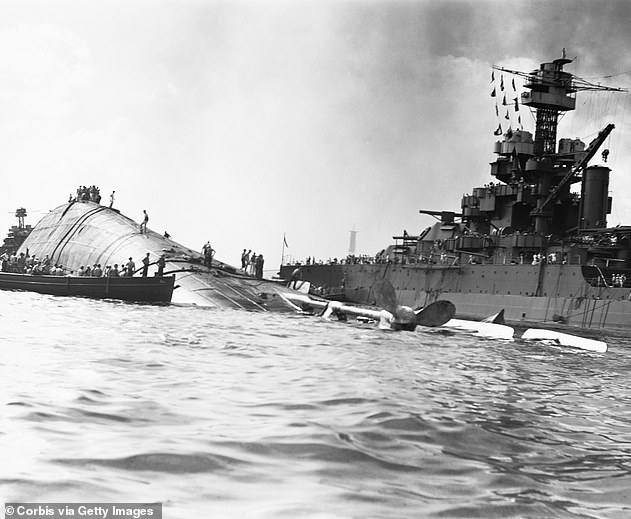 The USS Oklahoma floats capsized near the USS Maryland 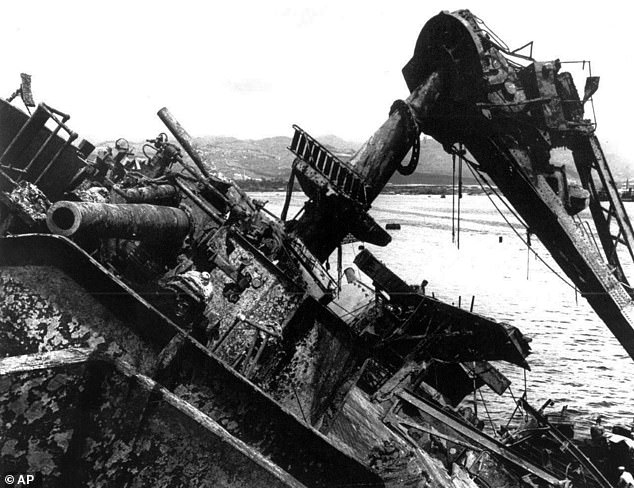 The capsized battleship USS Oklahoma is lifted out of the water at Pearl Harbor in Honolulu, Hawaii, on May 24, 1943 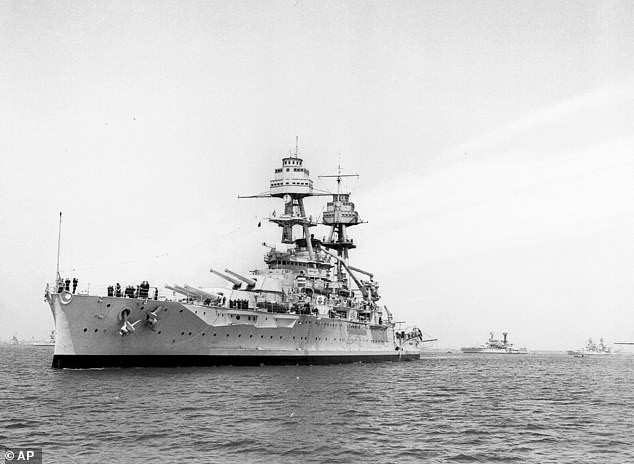 This April 1938 file photo shows the USS Oklahoma. The ship sank during the Dec. 7, 1941 attack on Pearl Harbor

He then helped pass ammunition to the Maryland’s anti-aircraft guns.

After the battle, Russell and two others went to Ford Island, next to where the battleships were moored, in search of a bathroom.

A dispensary and enlisted quarters there had turned into a triage center and place of refuge for hundreds of wounded, and they found horribly burned sailors lining the walls. Many would die in the hours and days ahead.

‘Most of them wanted a cigarette, and I didn’t smoke at that time but I, uh, I got a pack of cigarettes and some matches, and I lit their cigarettes for them,’ Russell said.

‘You feel for those guys, but I couldn’t do anything. Just light a cigarette for ’em and let ’em puff the cigarettes.’

Russell still thinks about how lucky he was. He ponders why he decided to go topside on the Oklahoma, knowing most of the men who stayed behind likely were unable to get out after the hatch closed.

In the first two days after the bombing, a civilian crew from the Pearl Harbor Naval Shipyard rescued 32 men trapped inside the Oklahoma by cutting holes in its hull. But many others perished.

Most of those who died were buried in anonymous Honolulu graves marked as ‘unknowns’ because their remains were too degraded to be identified by the time they were removed from the ship between 1942 and 1944. 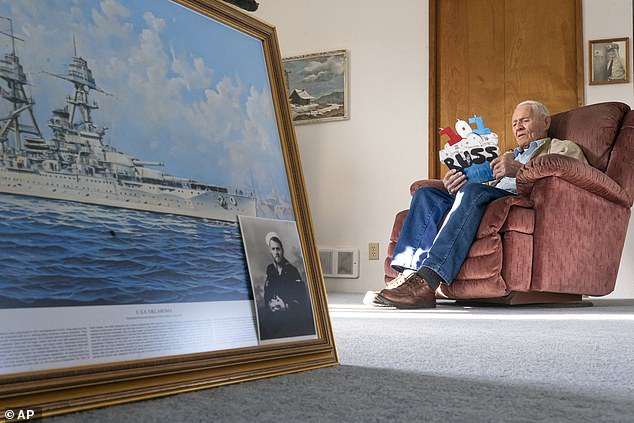 Pearl Harbor survivor and World War II Navy veteran David Russell, 101, reads a birthday card while talking about his time aboard the USS Oklahoma and his life after the war on Monday, November 22, 2021, in Albany, Oregon

In 2015, the Defense POW/MIA Accounting Agency exhumed 388 sets of these remains in hopes of identifying them with the help of DNA technology and dental records. They succeeded with 361.

Russell’s brother-in-law was among them. Fireman 1st Class Walter ‘Boone’ Rogers was in the fireroom, which got hit by torpedoes, Russell said. The military identified his remains in 2017, and he’s since been reburied at Arlington National Cemetery.

Russell remained in the Navy until retiring in 1960. He worked at Air Force bases for the next two decades and retired for good in 1980.

His wife, Violet, passed away 22 years ago, and he now lives alone in Albany, Oregon. He drives himself to the grocery store and the local American Legion post in a black Ford Explorer while listening to polka music at top volume.

When he’s not hanging out with other veterans at the legion, he reads military history and watches TV. He keeps a stack of 500-piece puzzles to keep his mind sharp.

For decades, Russell didn’t share much about his experiences in World War II because no one seemed to care. But the images from Pearl Harbor still haunt him, especially at night. 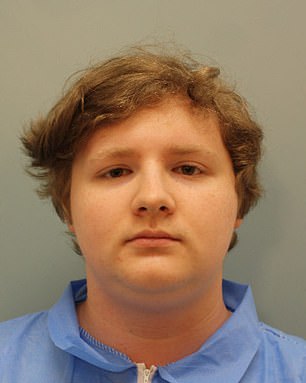 Texas boy, 17, ‘told police he was SLEEPING when he stabbed his twin sister to death’ 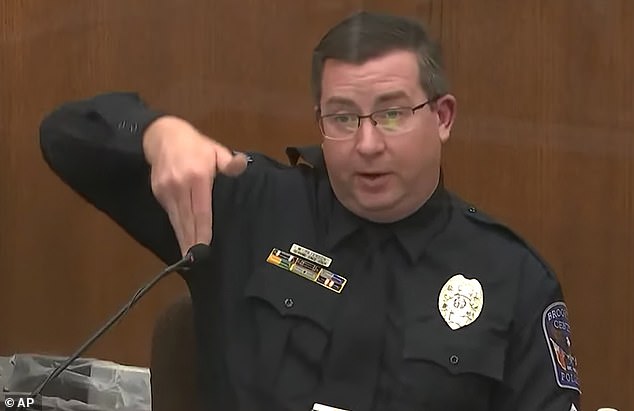 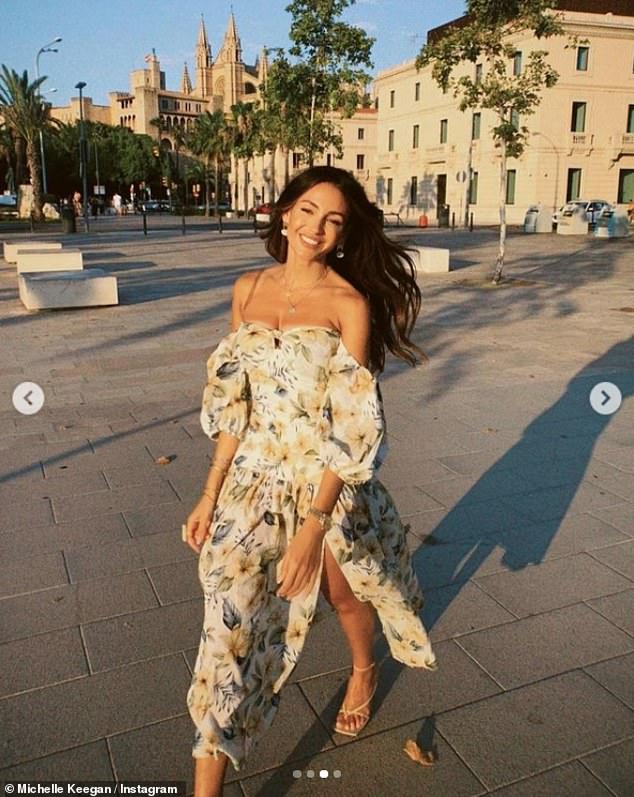 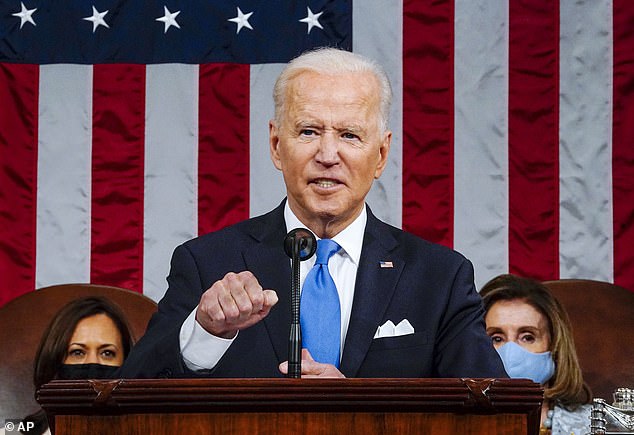 5 Best Cryptocurrency to Buy for the Weekend Rally February 2022 Week 1 – InsideBitcoins.com
49 mins ago