For many it was the show that defined a golden generation of British comedy, with classic lines still remembered, iconic scenes still discussed on TV countdowns and seemingly endless repeats aired across a variety of channels.

It is of course Only Fools And Horses, the show that immortalized David Jason as loveable South London “fly” trader Derek ‘Del Boy’ Trotter and helped launch the career of relative unknown Nicholas Lyndhurst as his hapless brother, Rodney.

While the show signed off some 18-years ago, hundreds of never-before-seen photos have been unearthed and made available for public viewing by the BBC.

There they are: of course Only Fools And Horses immortalized David Jason as South London “fly” trader Derek ‘Del Boy’ Trotter and helped launch the career of relative unknown Nicholas Lyndhurst as his hapless brother, Rodney

To celebrate the 40th anniversary of its fist ever episode on September 8th 1981, the long-forgotten negatives – all of them featuring the principal cast on set – have been brought to life with the aid of digital technology.

The black and white images include an assortment of much loved cast-members, among them Patrick Murray as Mickey Pearce, John Challis as wheeler-dealer car salesman Boycie, the late Buster Merryfield as Uncle Albert and the late Roger Lloyd-Pack as dimwitted Trigger.

While the show was ostensibly set in Peckham, the images include scenes at Butser Hill, near Petersfield in Hampshire, Studland Beach in Dorset and Margate in Kent.

Harlech Tower in Acton, west London was originally used for the show’s opening credits, before producers selected Whitemead House in Bristol from 1988 onwards. 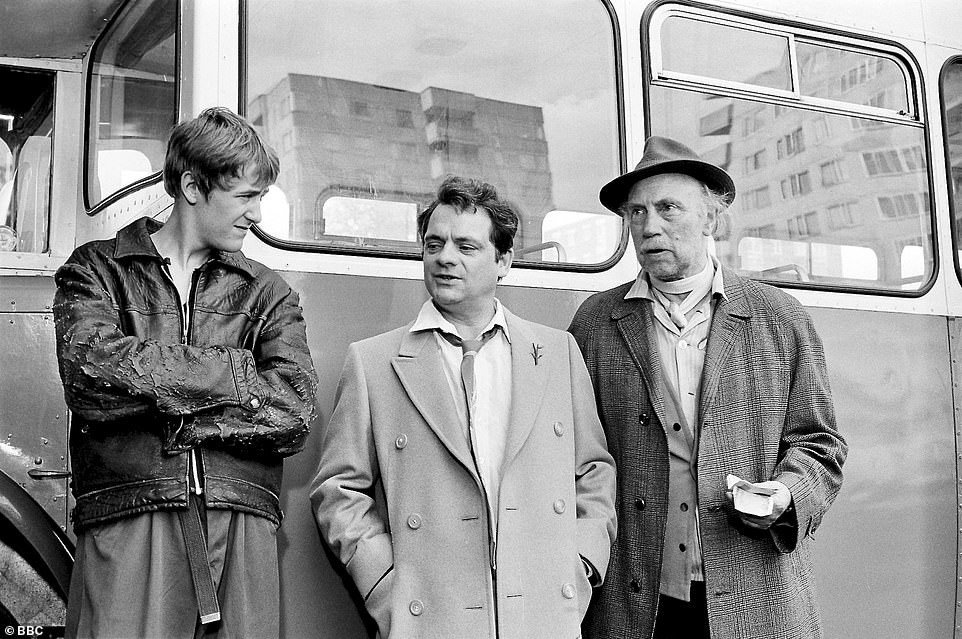 For many it was the show that defined a golden generation of British comedy, with classic lines still remembered, iconic scenes still discussed on TV countdowns and seemingly endless repeats aired across a variety of channels 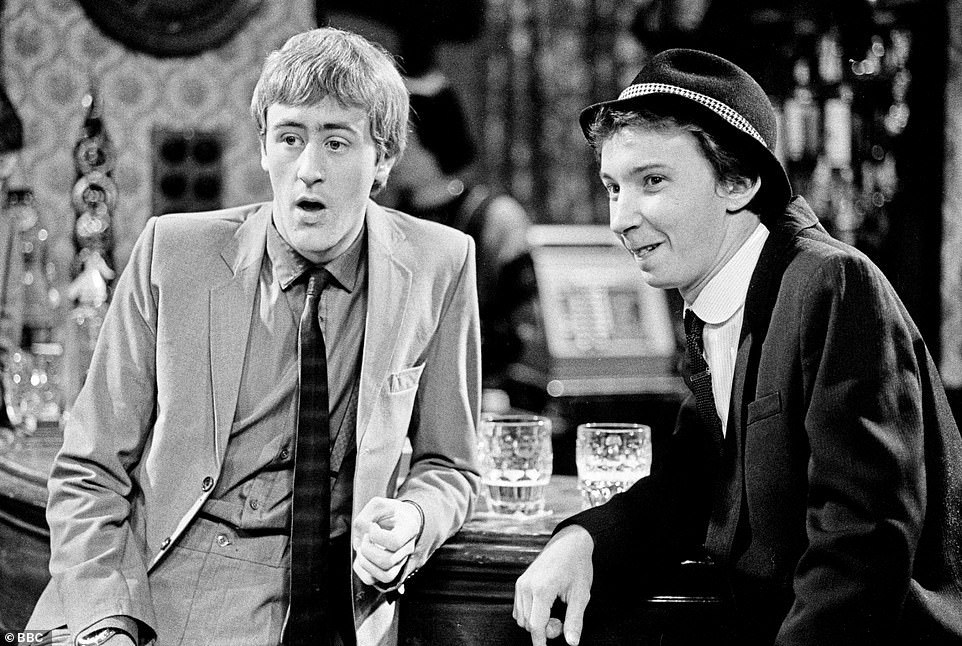 Newly released: While the show signed off some 18-years ago, hundreds of never-before-seen photos have been unearthed and made available for public viewing by the BBC (pictured Nicholas Lyndhurst and co-star Patrick Murray as Mickey Pearce) 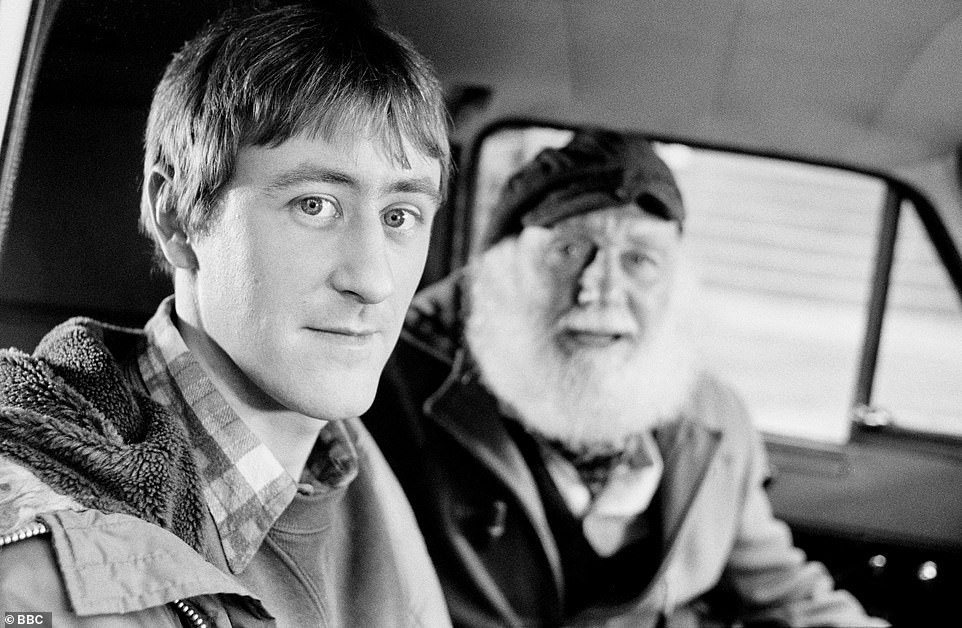 What a plonker! Nicholas Lyndhurst poses for a never before seen photo with co-star Buster Merryfield as Uncle Albert

Of the new collection, Robert Seatter, Head of BBC History, said: ‘This cache of new photos reveals the genuine joyful camaraderie at the heart of one of the nation’s best loved sitcoms.

‘Fans will love seeing the on set antics of the leading actors, as well as the paraphernalia of broadcasting on location of ever popular episodes.’

Luke O’Shea, Archive Collections Manager, added: ‘These unique photographs show filming on location, set design and the cast and crew from the first episode to the last. It is brilliant to share these fantastic memories with the audience.

‘To the best of our knowledge, these images have not been released or viewed previously and have now been fully restored for the enjoyment of fans of the show and of photography. It is an honour to be the custodian of these images and to curate a collection that brings joy to the viewers.’ 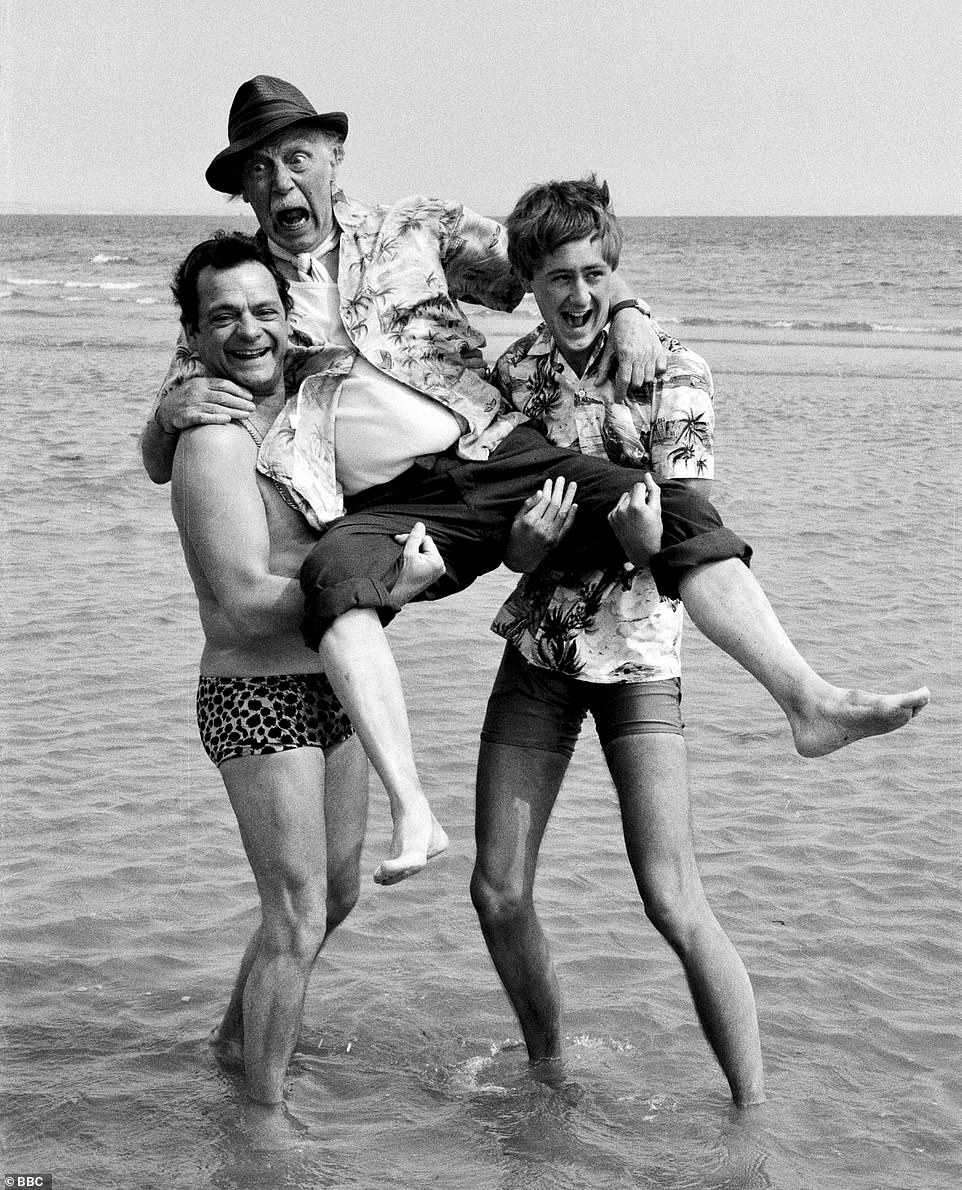 Good times: David Jason as Del Boy Trotter, Lennard Pearce as Grandad and Nicholas Lyndhurst as Rodney Trotter lark about in the sea while filming the episode It Never Rains 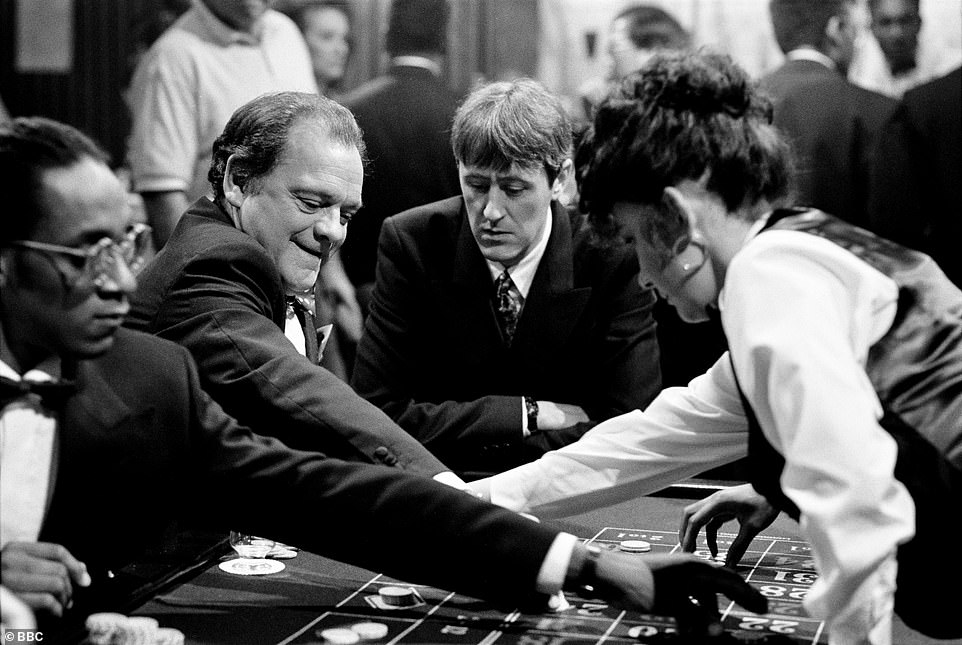 Here we go: Wheeler dealer Del Boy is seen at the blackjack table with Rodney in another unseen still from the iconic show 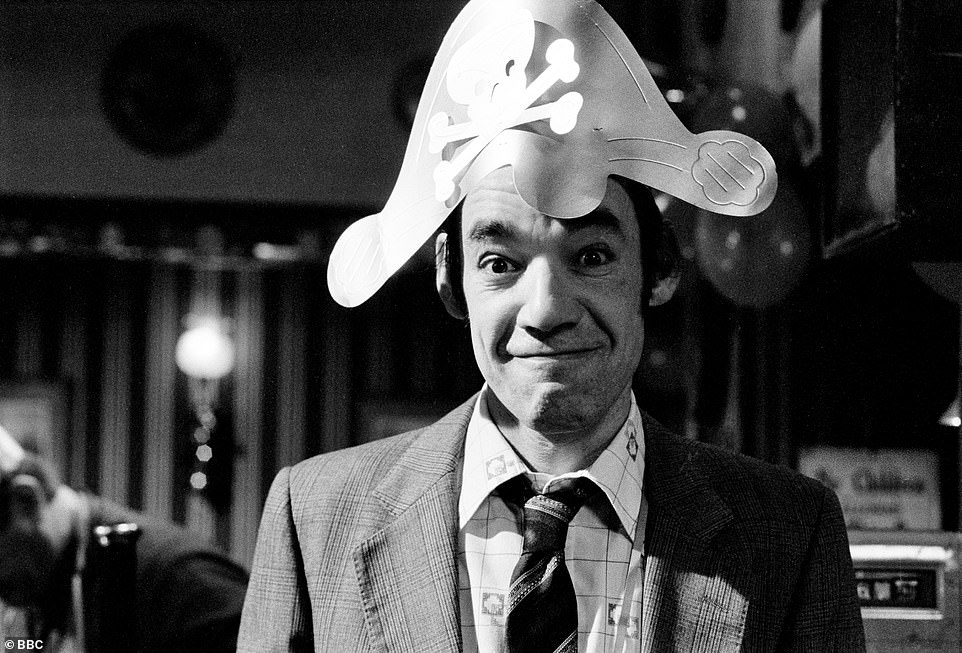 Slow off the mark: The late great Roger Lloyd-Pack, who tragically passed away in 2014, has some fun between takes 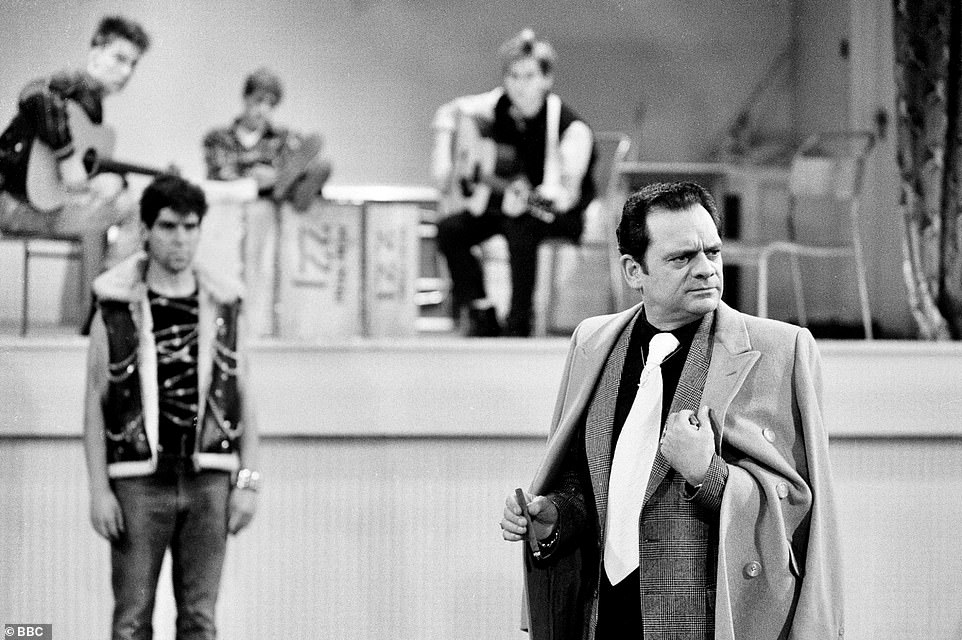 Hugely popular: It’s been two decades since Only Fools and Horses stopped regularly appearing on British TV screens – though fans were treated to one-off specials between 2001 and 2003

Set in South East London, Only Fools and Horses first broadcast on BBC One on 8th September 1981 with the episode Big Brother.

The series received numerous awards, including recognition from BAFTA, the National Television Awards and the Royal Television Society, as well as individual accolades for both David and Nicholas.

The programme ran for seven series and 16 Christmas specials until 2003, with the final episode of series seven attracting a record audience for a British sitcom of 24.3m viewers that still stands today. 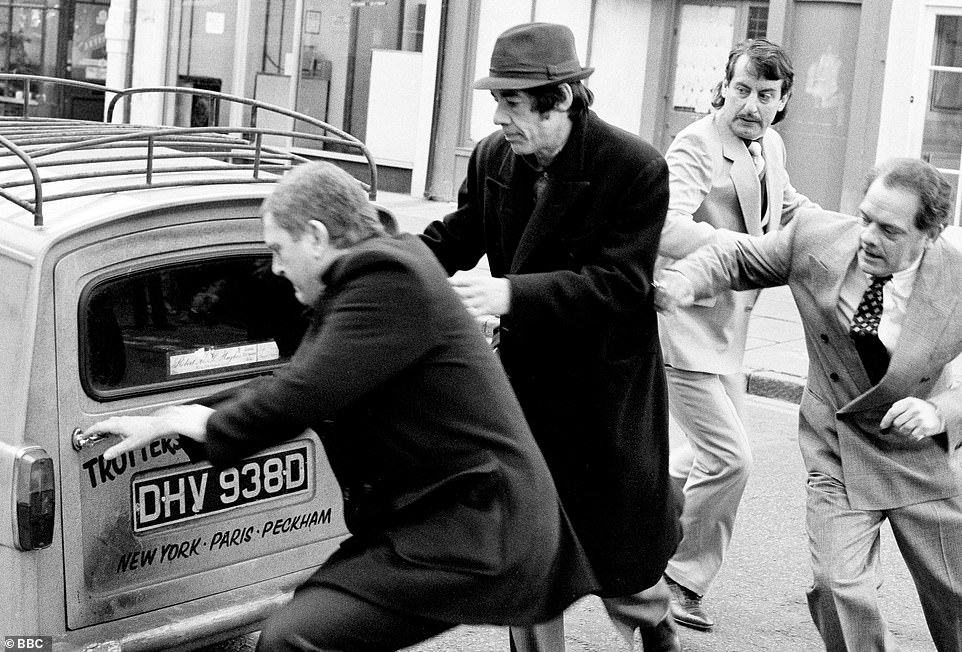 Steady on: (L-R) Kenneth MacDonald as Mike the barman, Roger Lloyd-Pack as Trigger, John Challis as Boycie and David Jason as Del Boy Trotter film a raucous scene for series six of Only Fools And Horses 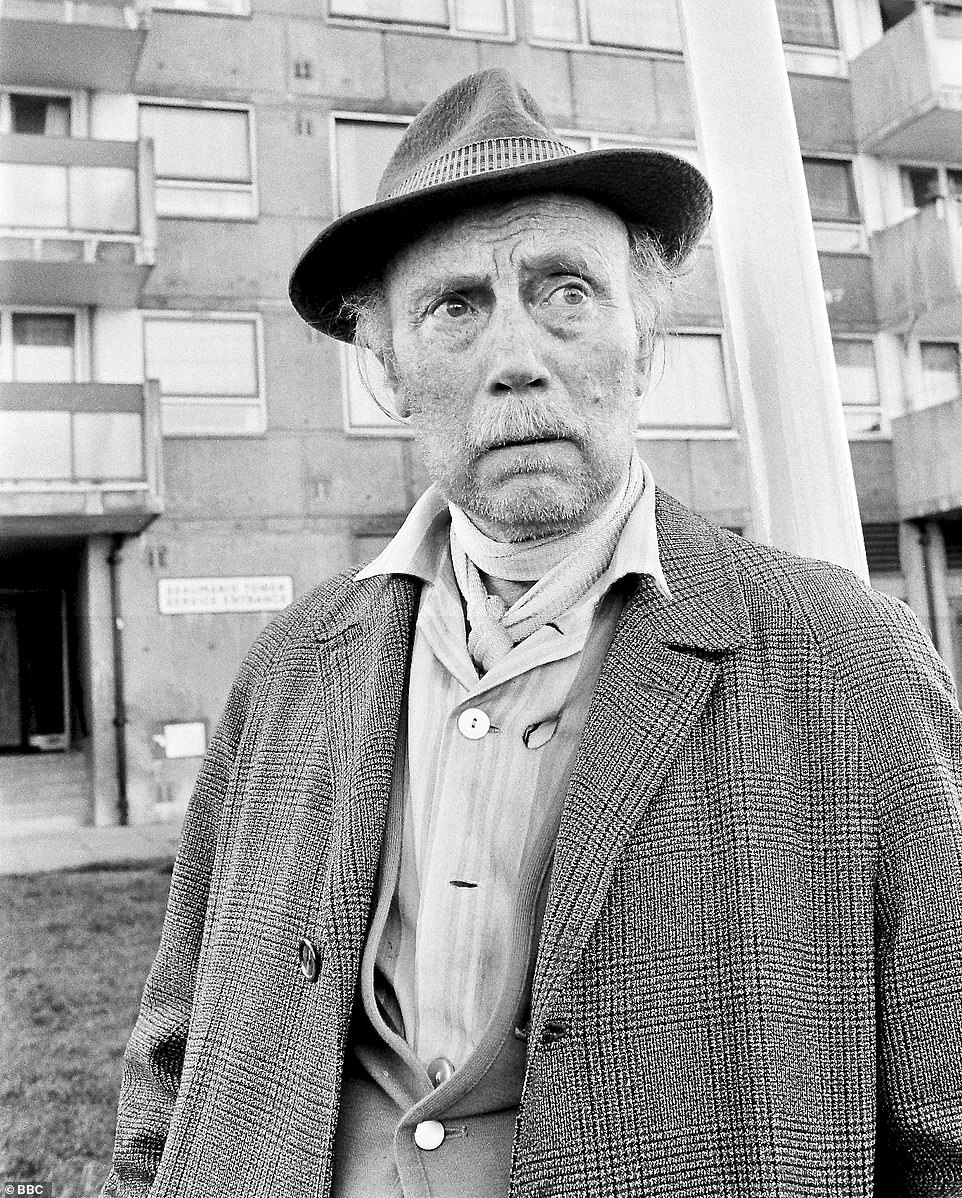 Old times: Lennard Pearce played Grandad before his death in 1984. He would be replaced by Buster Merryfield as Uncle Arthur for the remainder of the show’s run 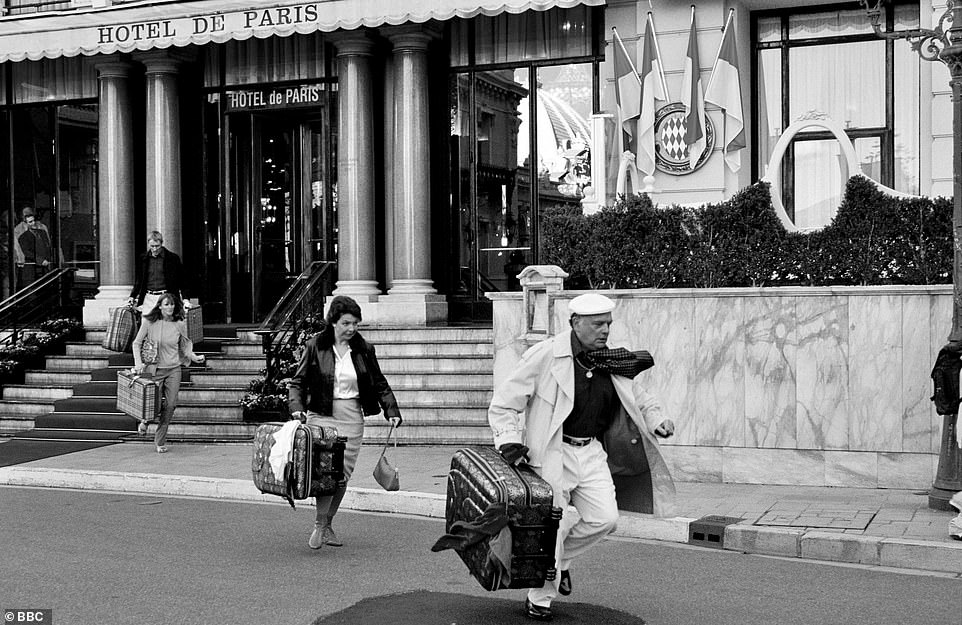 Leggit! Del Boy leads the way as the Trotters do a runner in an unseen still from the Christmas 2001 special If They Could See Us Now 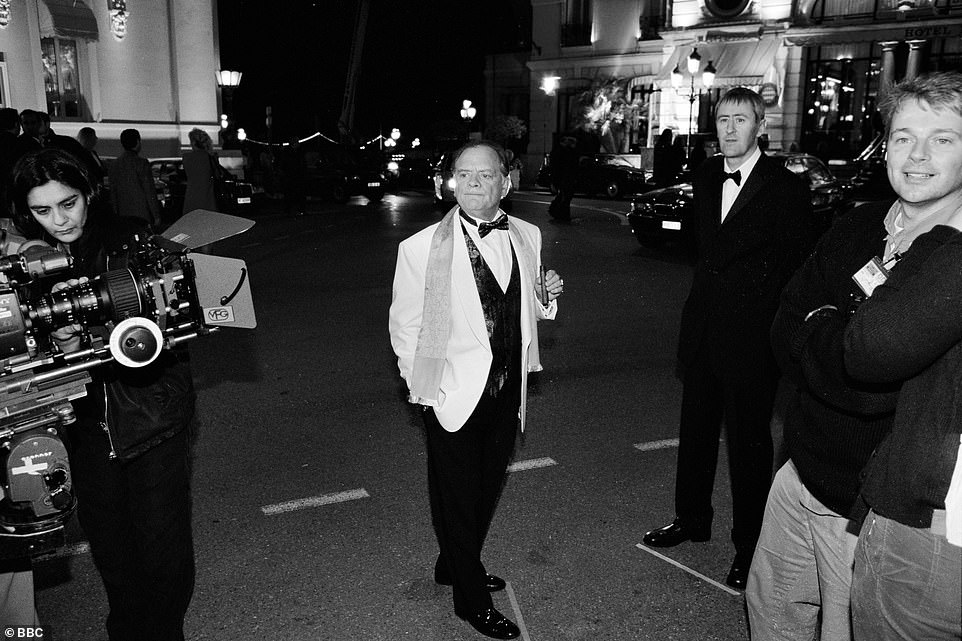 Quiet on set: David Jason and Nicholas Lyndhurst look off camera as they film a scene for the 2001 special 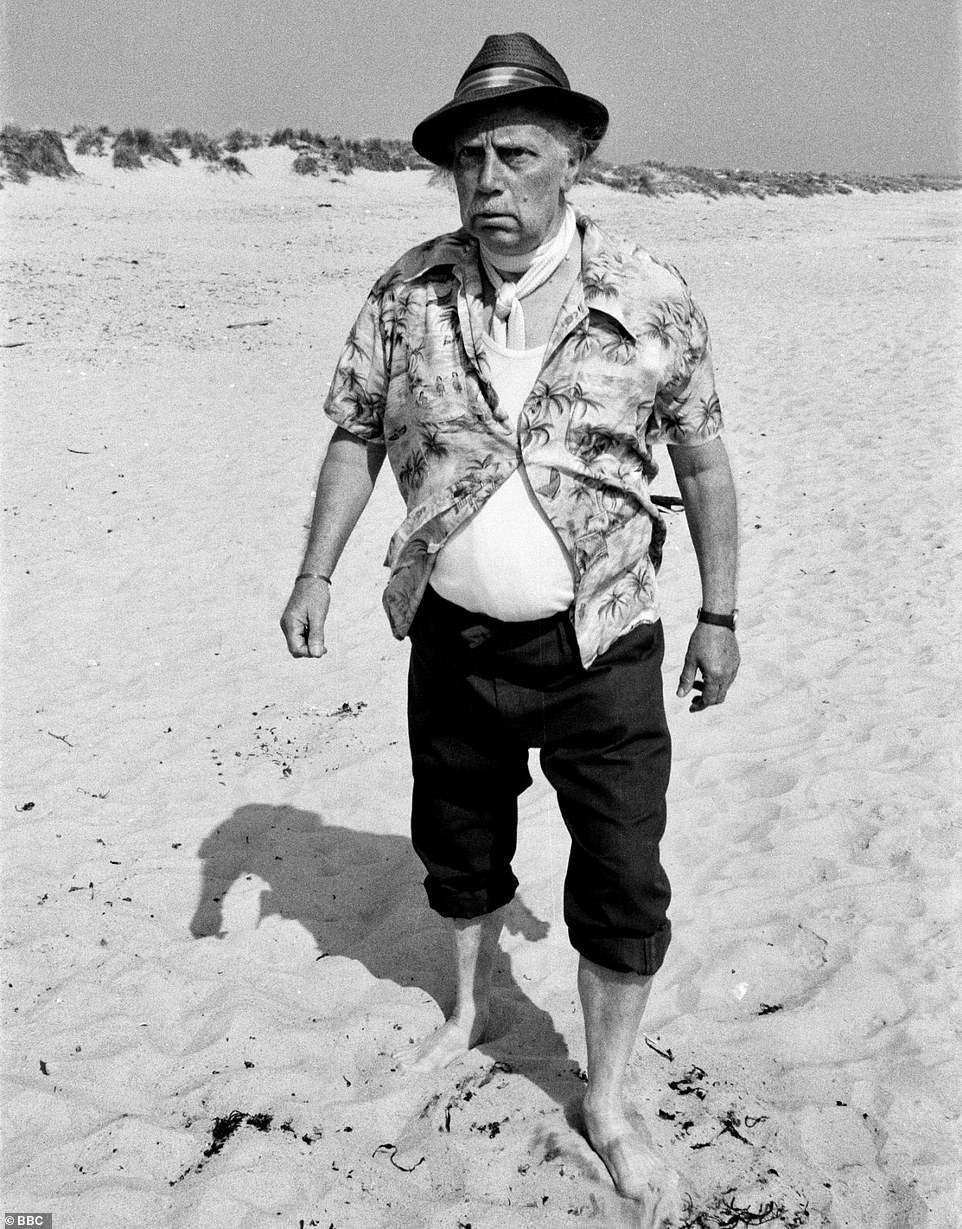 All at sea: Lennard Pearce, as Granddad, doesn’t look happy while filming a coastal scene for the BBC show

Del Boy’s hilarious ‘Play it cool’ scene, which ends with him falling through an open bar, has previously been voted the greatest Only Fools and Horses moment of all time.

The scene was named a fan favourite ahead by Radio Times readers, beating other legendary moments from the show – including Del and Rodney inadvertently deterring would be robbers as they race to a Christmas party on foot, dressed as Batman and Robin.

David Jason, who played wheeler dealer Derek Trotter, told how he was delighted by the findings of the RadioTimes.com poll.

He said: ‘I am thrilled the falling through the bar scene has given so much pleasure over the years. I feel very fortunate to have been involved with such an iconic show.

‘It started with the great John Sullivan for the fantastic scripts and the chemistry of the cast which brought it all to life. So many laughs over so many years.’ 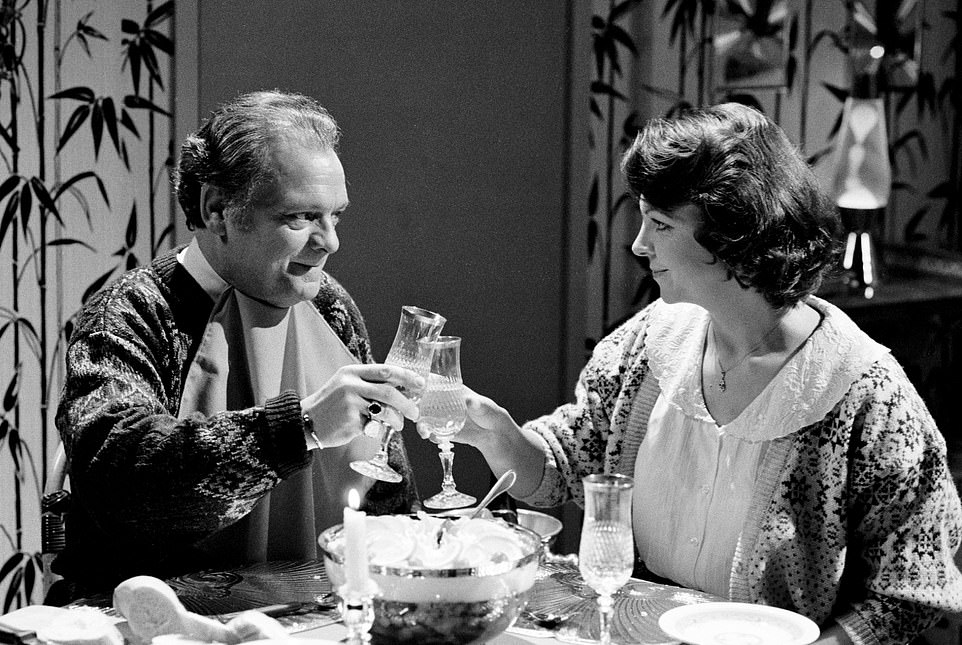 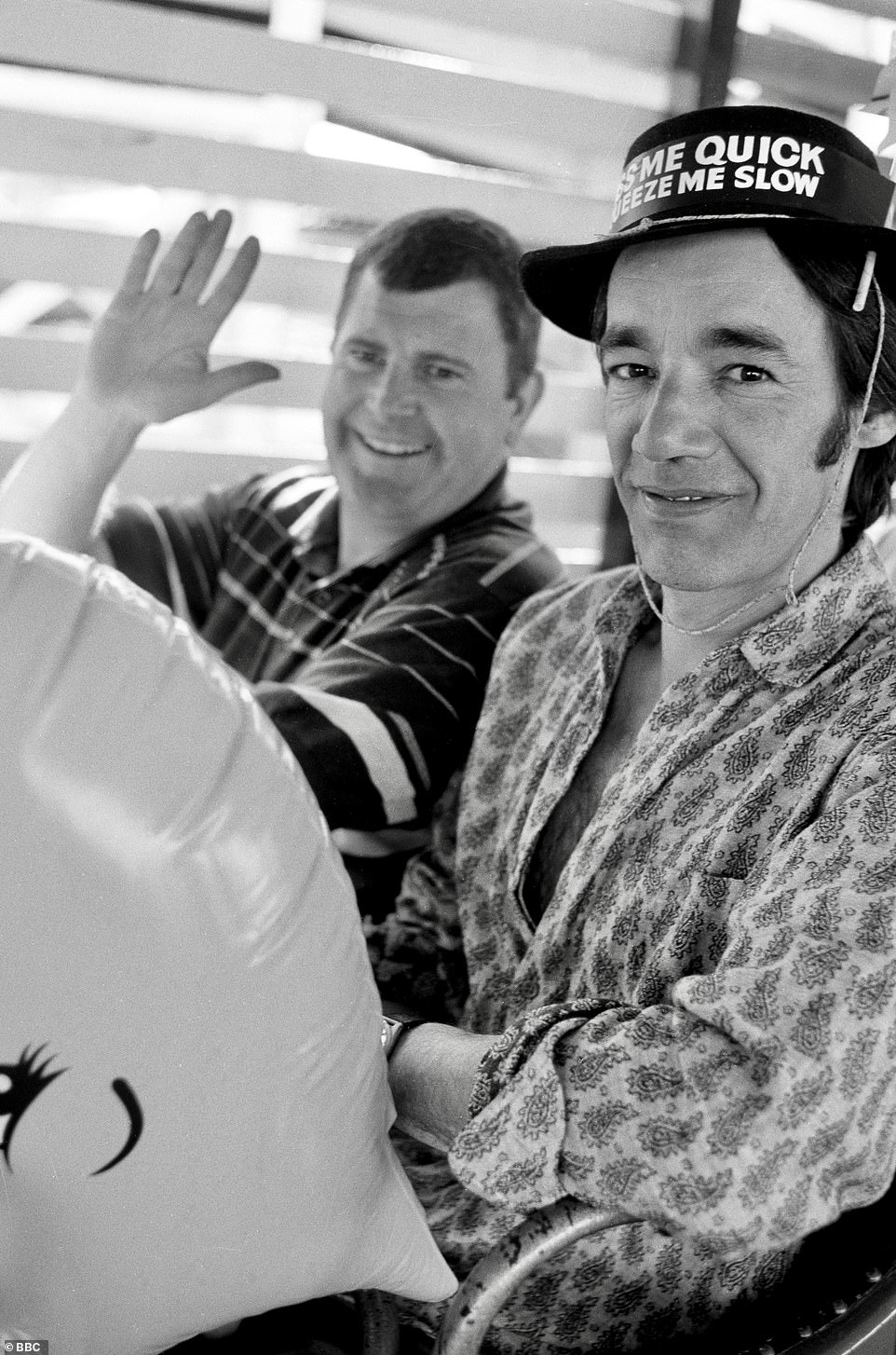 Side by side: Kenneth Macdonald as Mike and Roger Lloyd-Pack as Trigger take a break while filming the episode Jolly Boys Outing in Margate 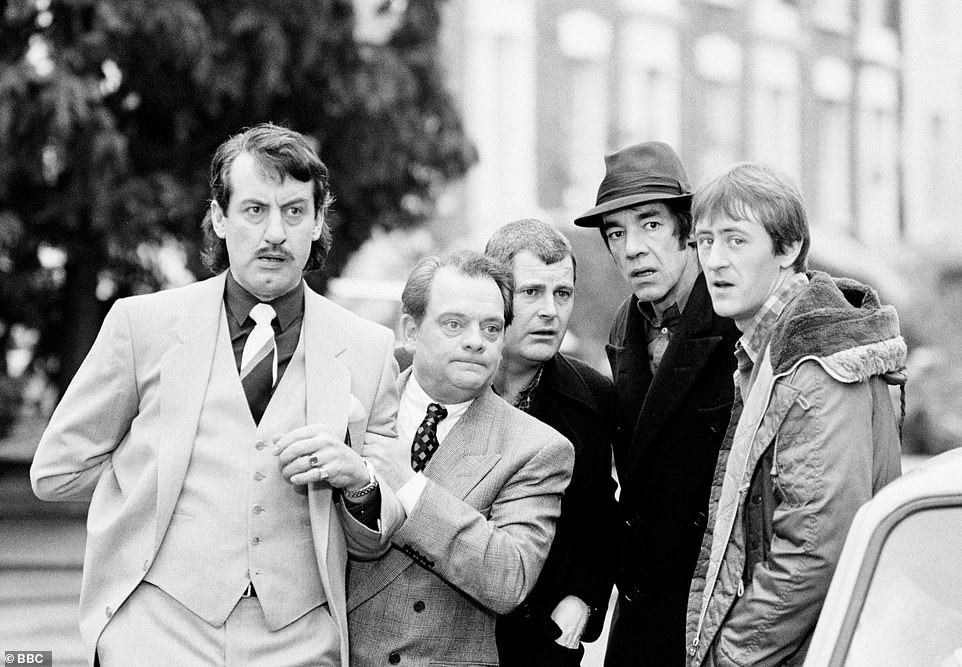 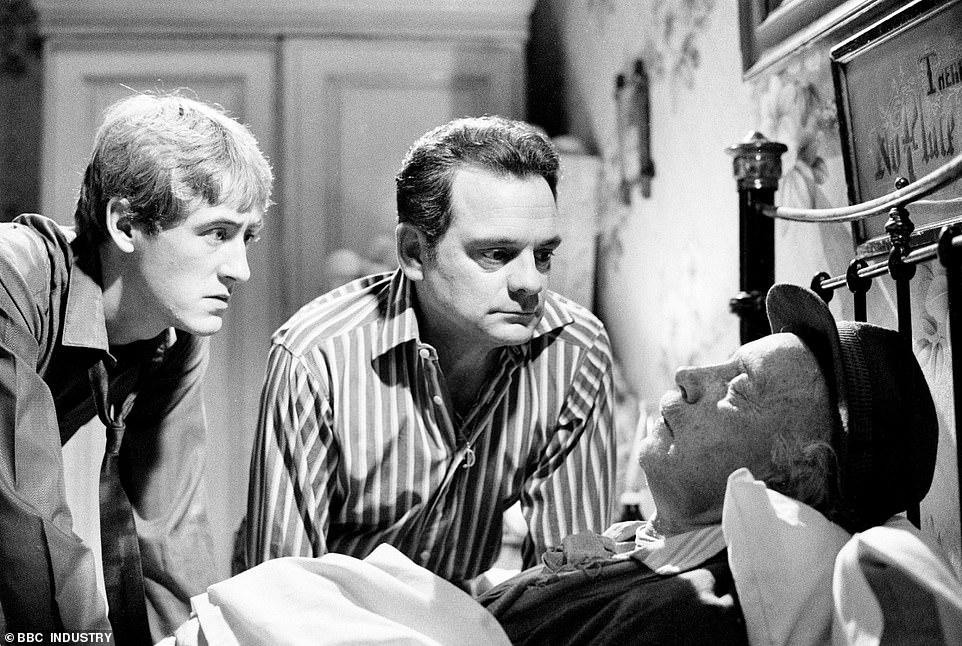 Farewell Granddad: Nicholas Lyndhurst, David Jason and Lennard Pearce film a poignant scene for a 1983 episode of the show A Closer Look At Online Poker In Portugal 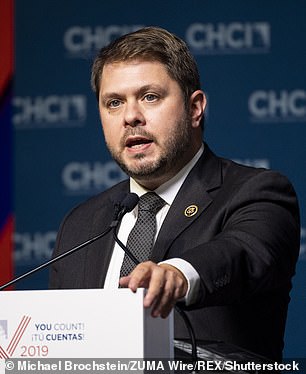 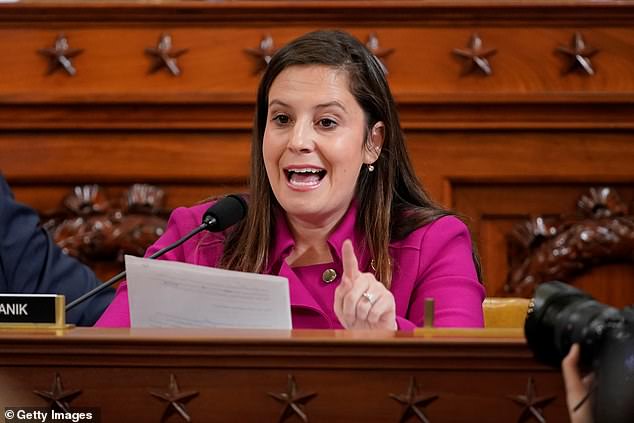 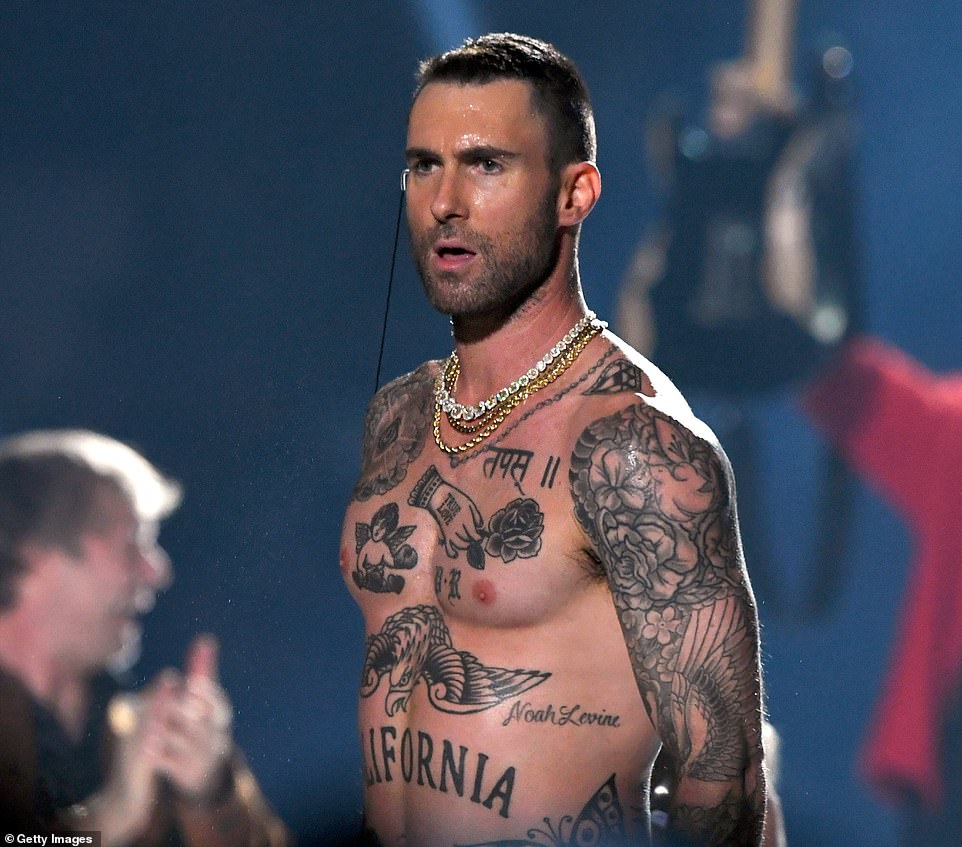