New York Police Department detectives found a loaded AR-15 tucked under the mattress of the man who allegedly shot and killed Officer Jason Rivera and critically wounded Officer Wilbert Mora in an ambush in Harlem on Friday night.

Lashawn McNeil, 47, is accused of opening fire at the officers with a .45-caliber Glock pistol, which was illegally equipped with a high-capacity drum magazine capable of holding up to 40 extra rounds.

The recent discovery by the NYPD means that McNeil’s illegal pistol wasn’t the only weapon he had in his bedroom when his mother called police after an argument between the two, though she has claimed she didn’t know he had any guns with him.

After opening fire at Rivera and Mora, McNeil was shot in the head and arm by a third officer responding to the call, Sumit Sulan. He succumbed to his injuries and died on Monday.

NYPD detectives found a loaded AR-15 tucked under the mattress of Lashawn McNeil, 47, who allegedly shot and killed one officer and injured another in Harlem 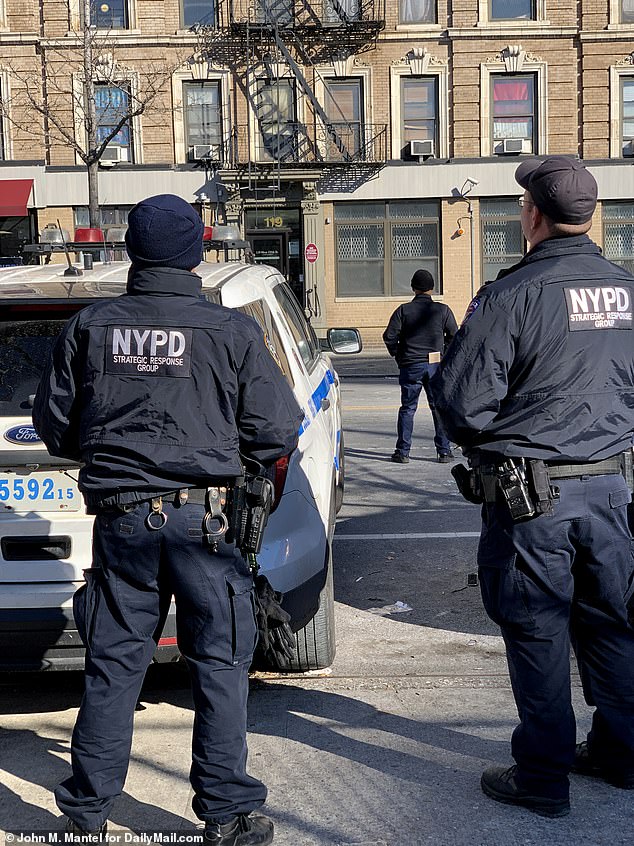 Lashawn McNeil, 47, is accused of opening fire at the officers with a pistol illegally equipped with a magazine capable of holding up to 40 extra rounds. Above, cops were investigating and interviewing residents outside the home of the shooting on Saturday 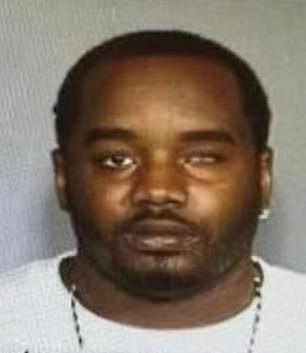 McNeil, who was shot by a third officer, Sumit Sulan, has since succumbed to his injuries and died on Monday

The NYPD posted a photo of the AR-15 found under McNeil’s mattress on Twitter. ‘A day after Officers Rivera and Mora were shot in Harlem, your NYPD detectives were still on the scene executing a court-authorized search which lead to the discovery of this loaded AR-15 assault weapon under the suspect’s mattress,’ the post read.

The post came just days after New York Police posted a photo of the blood-covered illegal Glock 45 equipped with a high capacity 40 round magazine that was used to kill rookie officer Rivera and critically injure Mora.

The gun was outfitted with a drum magazine, a fire arm accessory that has been the subject of controversy and are illegal in New York, California, Colorado, Connecticut, Maryland, Massachusetts, New Jersey, Vermont and the District of Columbia, which all have a limit on magazine capacity.

Drum magazines and semi-automatic firearms were prohibited between 1994 and 2004 when the government passed the Federal Assault Weapons Ban, a legislative effort kicked off by the 1989 Stockton, California elementary school shooting.

After the ban ended in 2004, each state was free to make its own regulations on assault weapons and ammo capacity, with New York choosing to the set the capacity at 10 rounds.

Following the NYPD’s discovery on Monday, New York City Mayor Eric Adams announced a plan to combat gun violence by increasing the number of officers on the streets, working with state and city law enforcement partners and introducing measures aimed at stemming the flow of guns into NYC.

“New Yorkers feel as if a sea of violence is engulfing our city, but as your mayor, I promise you I will not let this happen. We will not surrender our city to the violent few,” Adams said at City Hall.

Patrick J. Lynch, the president of the NYC Police Benevolent Association, said the mayor’s plan is a good starting point. 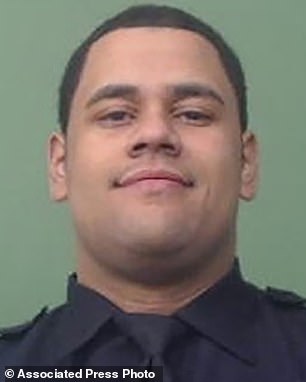 Officer Jason Rivera was killed in the shooting, while Wilbert Mora, 27,  is still ‘fighting for his life’ in NYU Langone Medical Center 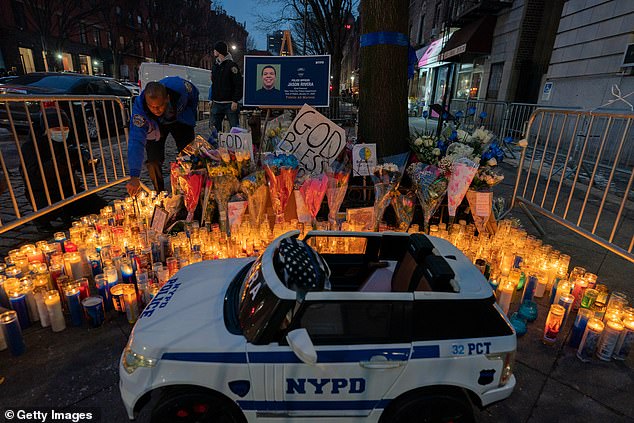 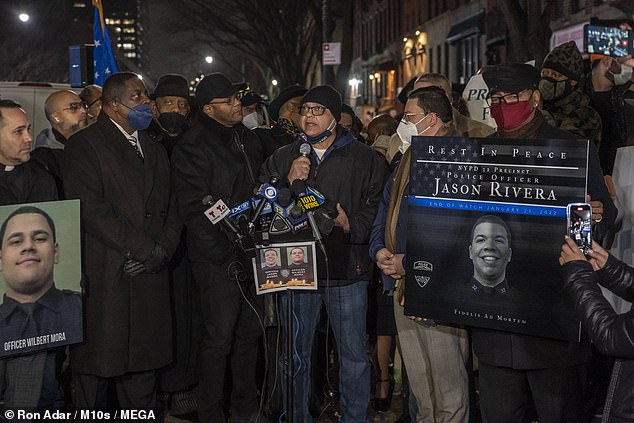 “We need stiffer penalties, consistently imposed, for gun crimes. And we need more resources to relieve the overstretched cops on the front lines,” Lynch said in a statement. “Mayor Adams is absolutely right that the message on the streets is that there are no consequences for carrying and using illegal guns.”

McNeil had a history of law enforcement trouble before the shooting on Friday, including a 2003 drug conviction in New York City. He also had several out-of-state arrests. In 1998, he was arrested in South Carolina on suspicion of unlawfully carrying a pistol, but records show the matter was later dismissed.

In 2002, he was arrested in Pennsylvania on suspicion of assaulting a police officer, Essig said.

McNeil had been married but the couple separated nearly two decades ago, according to Theresa Noa, who is married to his ex-wife’s brother. She said McNeil had four children from that marriage.

Details about what led to the deadly confrontation were still emerging.

Officials said a woman who made an emergency call Friday said she was ill and that her son who had come up to take care of her had become ‘problematic.’

Authorities said three officers went to the apartment after the call came in. The officers spoke with the woman and another son, but there was no mention of a weapon, police said. 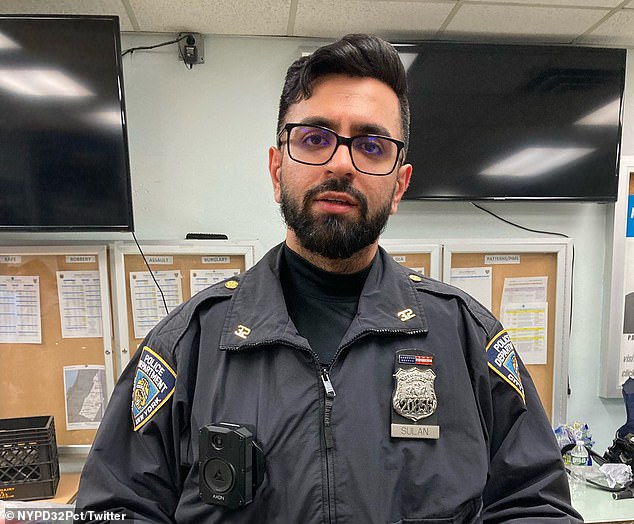 Officer Sulan, the ‘super rookie’ who shot McNeil, cannot get what happened out of his head, his mother told the New York Post on Sunday. 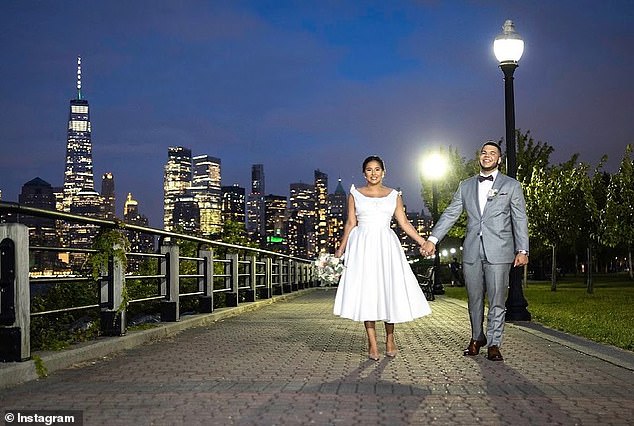 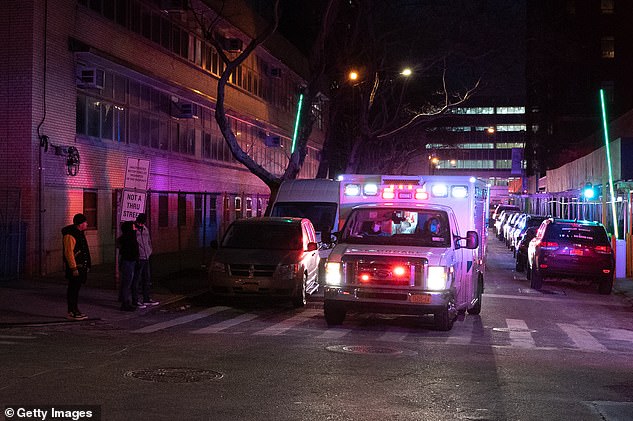 NYPD Officer Wilbert Mora is transported by ambulance. Fellow Officer Jason Rivera was killed in the attack while responding to a domestic violence call between a woman and her adult son

Sources told the Post that she had told McNeil not to come home with firearms while helping out his disabled brother, and that she did not believe he was carrying a weapon when she called police on Friday night.

The incident had started out as ‘a normal verbal family dispute with no injuries or anything out of the ordinary’, police sources added.

Sources told the New York Daily News that McNeil argued with his mother, Shirley Sourzes, about his veganism just before the shooting and had shared a controversial music video in 2014 depicting officers getting gunned down.

The video shows footage of police brutality against black men as two rappers appear holding guns to the head of a stoic white officer as they sing, ‘Time to start kill these coppers.’

The music video, ‘Hands Up’ by Uncle Murda & Maino, was posted as a tribute to Eric Garner, a black man who was choked to death by a white NYPD officer and whose cry, ‘I can’t breathe,’ became a rallying cry for the Black Lives Matter Movement.

Along with the video, McNeil shared a slew of conspiracy theory posts and videos on his Facebook page, which warned of a coming race war, that McDonalds conducted blood sacrifices, that black people were aliens, and that the UN had established a global army to bring about a new world order. He stopped sharing the conspiracy posts by early 2015.

Meanwhile, Officer Sulan, the ‘super rookie’ who shot McNeil, cannot get what happened out of his head, his mother told the New York Post on Sunday.

‘His brain is stuck on the situation,’ Dalvir Sulan, 60, said of her son, who emigrated from the family’s home in India about 15 years ago.

‘I’m proud. Everyone say he did good,’ she added. ‘I feel bad for the other [officer]. He died. We really feel bad. We’re sorry. We’re hurt. The other guy is critical, and we’re hurt.’

Sulan is a ‘super rookie’ who has only been on the job since April and at Harlem’s 32nd Precinct for two months, a law enforcement source told the Post. 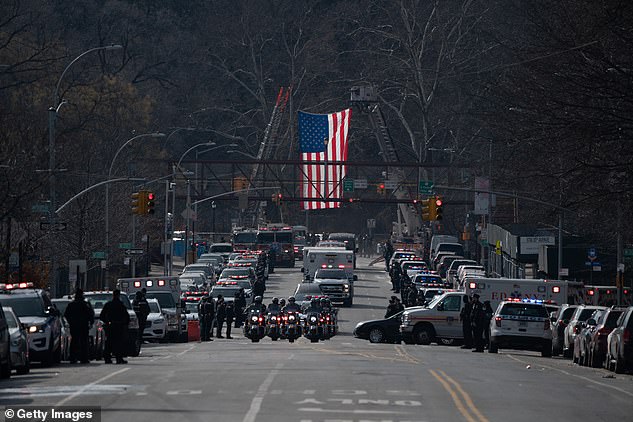 Above, traffic stood still as the remains of Rivera were brought to a funeral home on Sunday 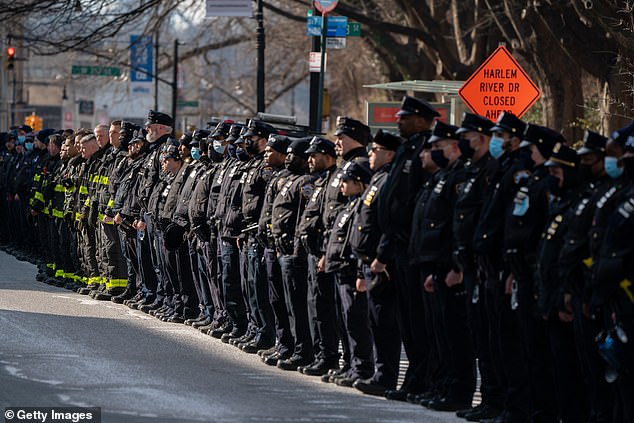 Above, New York City police officers and firemen stood at attention as they awaited the procession

‘He did a great job. We’re proud of him, but we’re sorry for both of [the other officers],’ she said. Asked by the Post about McNeil, Dalvir Sulan shook her head. ‘That person, he’s not really good,’ she said.

Mora was transferred on Sunday night from Harlem Hospital to NYU Langone Medical Center, where he continues to fight for his life in life-threatening condition, reported ABC 7.

He had already undergone two surgeries to remove a bullet that had become stuck in his brain.

Earlier Sunday, hundreds of uniformed officers in Manhattan stood silent as Rivera’s body was transferred from the Medical Examiner’s Office to a funeral home. Burial rites are scheduled for Friday with a service scheduled for Thursday at St. Patrick’s Cathedral.

Police officers, firefighters and EMS members lined the streets from the office on 30th Street in Manhattan and up along First Avenue just after 12:30pm. Hundreds stood in silence before saluting while a hearse transported his body uptown.

The moving sight came as his grieving widow posted a moving tribute to her husband on Instagram on Sunday.

‘Fly high my beautiful angel,’ she wrote, together with a picture of Rivera’s locker that she took at the NYPD’s 32nd Precinct in central Harlem. The pair had been married for just over three months.

‘Yesterday I visited the locker room where you used to FaceTime me at during your meal time or right before you had to go downstairs to the muster room for roll call at 15:00.

‘Last night was suppose to be your day 5 & you were RDO [off] for the next three days. We both waited for your RDO’s to spend them together. But now your soul will spend the rest of my days with me, through me, right beside me.

‘I love you till the end of time,’ Rivera’s grieving widow wrote.

Her Instagram profile also includes photos of the newly married couple out in Liberty State Park in Jersey City.

In one posting, she describes her husband as ‘my soulmate, best friend and lover from now until the end of time.’

Relatives, together with hundreds of NYPD officers and Mayor Eric Adams paid tribute to Rivera as his body was moved to a Manhattan funeral home. 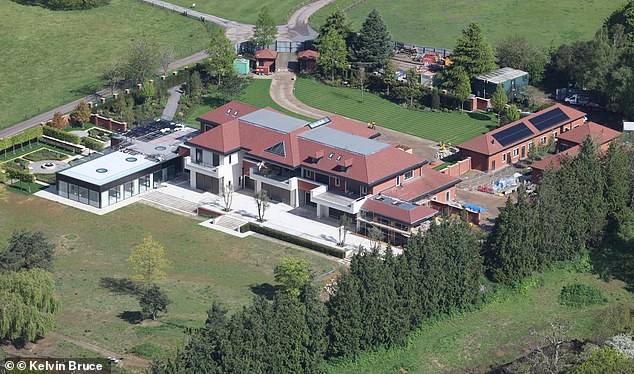 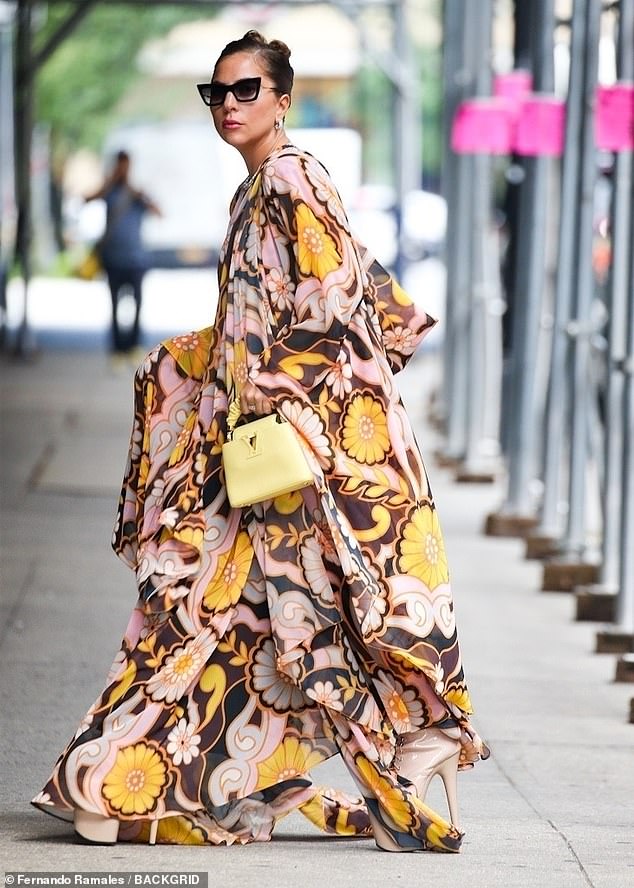 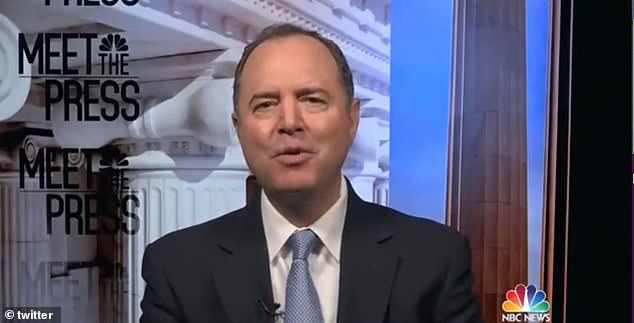 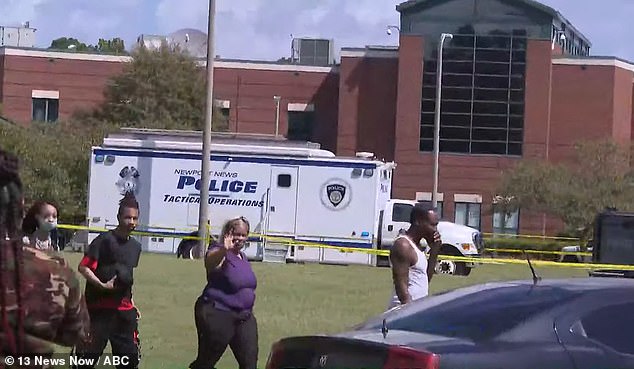 Another One! Villarreal Snags Main Event Seat on ClubGG in Back-to-Back Years
37 mins ago

YouTuber says he lost $2.8M after buying LUNA during the crash
49 mins ago