NYPD officers have been told they will be sent home without pay unless they get vaccinated against Covid or provide a weekly negative COVID-19 test which they have taken on their own time.

The new guidelines follow an executive order by Mayor Bill de Blasio about coronavirus protocols for city workers, in response to the surge of the highly contagious Delta variant.

The rules will go into effect on Monday, September 13.

Civilians and paid members of the NYPD who choose to remain unvaccinated will have to get a PCR or a rapid PCR test every seven days on their own time and upload results to an internal contact-tracing system.

Tests have to be done on a weekly basis while officers are off-duty, but the NYPD announced it will soon allow its workforce to get tested at 15 sites across the city at no charge, according to a memo.

At-home antigen tests will not be accepted by the department, under the new police policy.

‘Members of the Service who fail to comply with this directive will not be permitted to work and will be ineligible to receive pay for each day of noncompliance,’ the memo reads.

That is far lower than the wider New York City population, which has a 61 percent vaccination rate.

The NYPD has one of the worst vaccination rates among police departments in big cities across the country.

Other cities, including Los Angeles and Washington D.C., have more than half of their workforce vaccinated, while Honolulu remains the only city in the U.S. with three-quarters of its police department vaccinated. 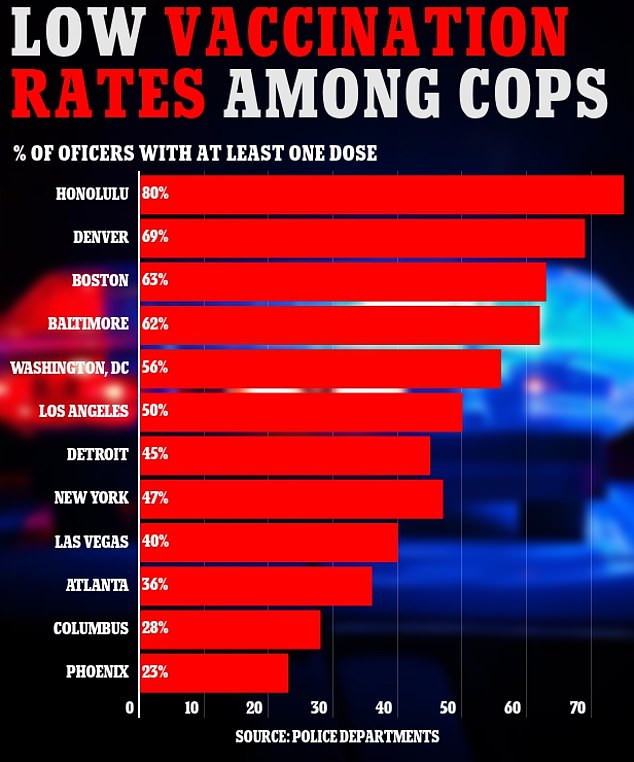 The NYPD has one of the lowest vaccination rates – 47 percent – among other cities’ police departments, falling behind Honolulu, Boston, Baltimore, D.C., Los Angeles and Detroit

Unvaccinated NYPD officers will also have to wear face masks.

As part of the new rules, a daily masking roll call will be held by supervisors to see which officers have to wear face coverings, according to a separate police memo sent out to supervisors.

The Police Benevolent Association, which represents 24,000 of the NYPD’s 36,000 officers, told its members the new policies are ‘contrary to our previous conversations with the Department.’

‘In the PBA’s view, any testing mandated by the Department must be conducted on job time and at the city’s expense, and any test received outside of the MOS’s regular working hours should be subject to overtime compensation,’ PBA President Pat Lynch wrote Wednesday evening to cops in an email obtained by The Post.

The PBA will coordinate with the Board of Collective Bargaining to ensure unvaccinated officers don’t pay out-of-pocket for tests, as it will ask them to take detailed notes of their testing time. 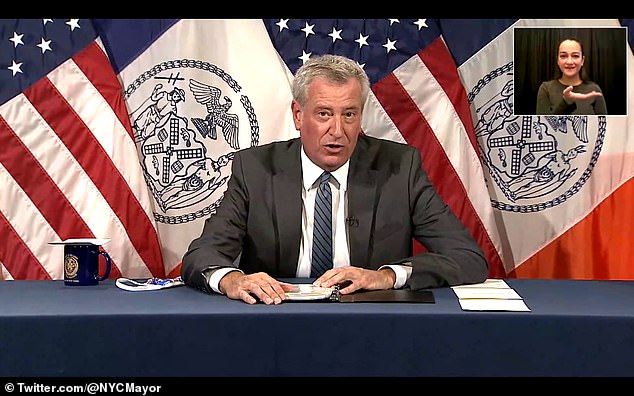 Mayor Bill de Blasio’s (pictured) new order has caused outrage among several police union’s, who are asking the city to pay for the tests of officers who choose to remain unvaccinated

Some police supervisors said they understand the move to try to increase the number of double-jabbed officers, but they also feel frustrated over the lack of clarity on whether first responders should get the vaccine in the first place.

‘I don’t want to have to ask a guy about their vaccination status because if I pull them off a detail and they lose overtime, they are going to accuse me of discrimination,’ one police source, who is fully vaccinated, told the Post.

‘These guys aren’t going to sue (Police Commissioner Dermot) Shea, they are going to sue me and he’s going to be out of here with a cushy City Hall gig or something,’ the source added.

The NYPD put a stricter masking policy for unvaccinated cops into place in August,  ordering officers without proof of vaccination on file to mask up at all times.

It came after an email was sent out by Commissioner Shea on August 20, mentioning that three members of the NYPD lost their lives to COVID ‘bringing to 60 the total number of our uniformed and civilian coworkers and friends taken by the pandemic,’ according to the Post.

The policy also requires officers to wear a mask when ‘interacting with members of the public’ — regardless of their vaccination status. 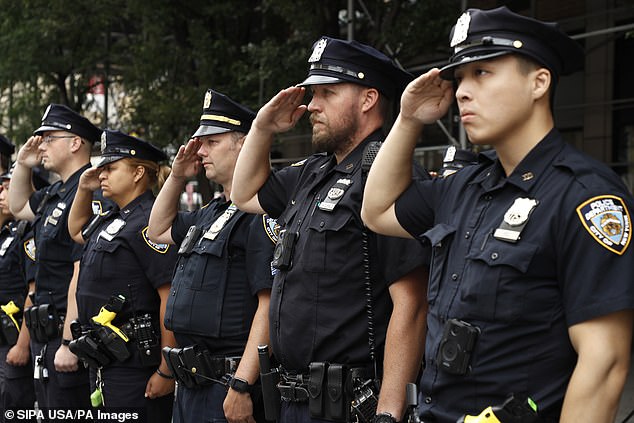 NYPD officers (pictured) will also have to wear masks, regardless of their vaccination status

But days later, Shea and other highly ranked policemen were seen disobeying the new rules in the latest example of the NYPD ignoring their own COVID-19 guidelines since the start of the pandemic.

Head of NYPD’s Captains Endowment Association Chris Monahan, said, ‘Any mandates from the City of New York requiring testing must be on job time.’

The CEA intends to file an improper practice if the policy does not change.’ Louis Turco, president of the LBA, told the Post this ‘is a mandatory subject of bargaining.’

‘Neither the NYPD nor the City negotiated with us,’ he said, adding that ‘we are exploring all our option.’

New York City has reported 2103 cases of Covid within the last seven days on Thursday, amid a nationwide case surge fueled by the highly contagious delta variant.

The local death rate appears to be stabilizing at least a bit at less than ten deaths per day on September 9, according to the Center for Disease Control and Prevention.

At least 79 percent of New York state’s population received one dose of the COVID-19 vaccine and nearly 69 percent received both doses. That’s about 11,900,00 people out of a total population of nearly 19.5million, the CDC reported. 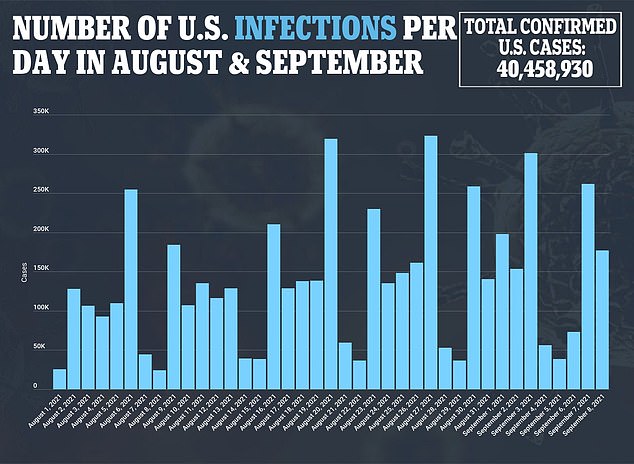 The number of U.S. infections per day in August and September have fluctuated with a recent spike as of September 9 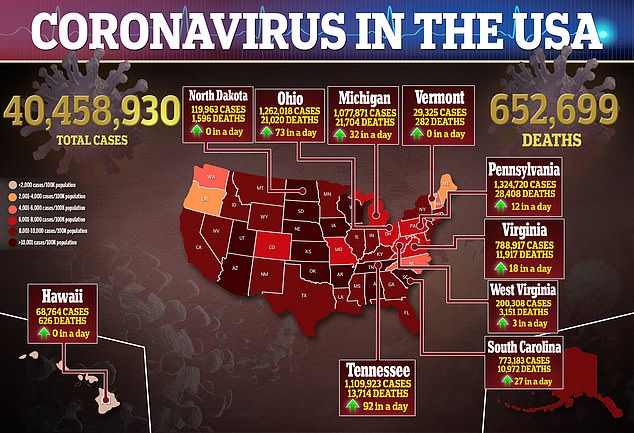 National Television Awards 2021: The stars give an insight into their NTA prep 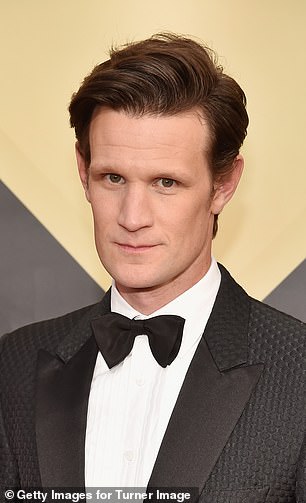 TALK OF THE TOWN: Looks like Matt Smith is back in the dating pool 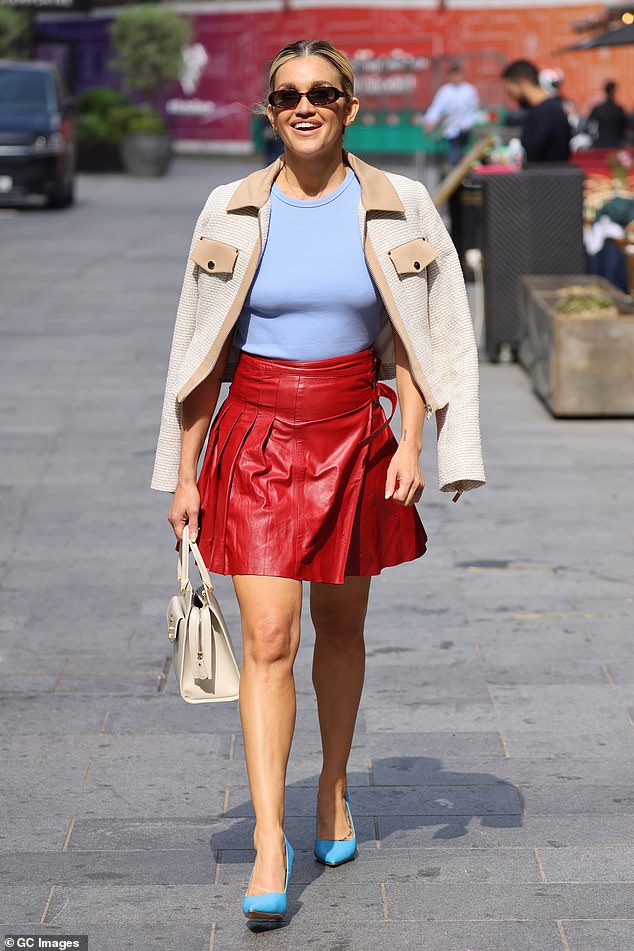 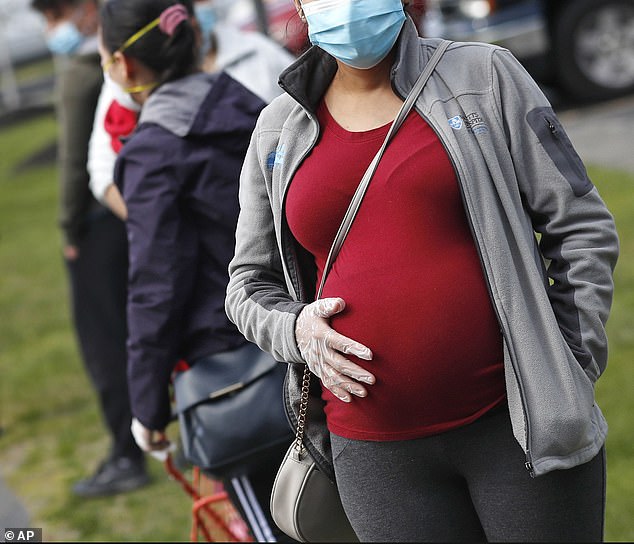