Robert Burck, 50, was arrested on charges of aggressive panhandling and resisting an officer without violence on Saturday

Robert Burck, 50, was booked into the Volusia County Jail on Saturday and charged with aggressive panhandling and resisting an officer without violence.

A video posted to social media showed the scantily-clad performer – who wears only white briefs, boots and a cowboy hat during appearances – sitting on the hood of a police car, with his hands cuffed behind his back and his signature guitar strewn across his lap.

A female officer attempts to pin Burck to the side of the vehicle but he can be seen seizing up and spinning around in an apparent bid to evade her.

A second officer then emerges from the car, and a small crowd gathered nearby can be heard booing the police, with one person calling out, ‘Free the cowboy!’ as Burck is taken into custody. 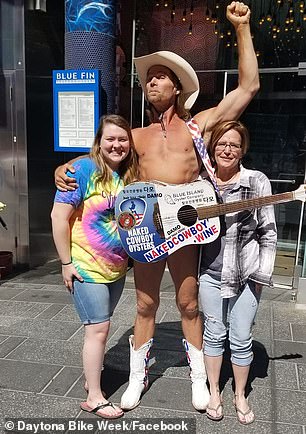 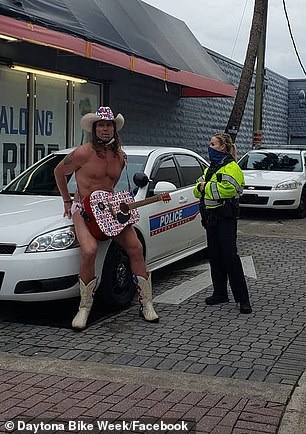 Burck says he has traveled to Daytona Beach for Bike Week for the last 21 years. Video posted to social media (right) showed him sitting on the hood of a police car with his hands cuffed behind his back 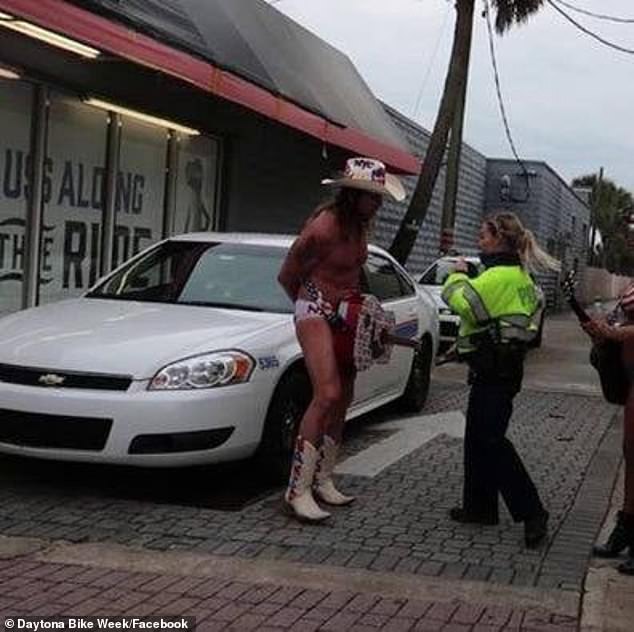 The circumstances leading up to his arrest are not immediately clear.

Video posted on the official ‘Naked Cowboy’ Facebook pages shows Burck playing his guitar as he walks down a busy street in Daytona.

The 50-year-old Times Square staple is seen shaking his backside and flexing his muscles as several bystanders stop to take photos.

Burck made an appearance before a Volusia County Judge on Sunday.

During the proceedings, he spoke to tell the judge what he’s known for.

‘I sing and play guitar in my underwear,’ Burck said. ‘I’m the Naked Cowboy from New York City. I’ve been coming down here 21 years in a row.’

Burck said he was arrested while he was playing guitar on the street, FOX35 reported.

Of the panhandling charges, he added: ‘I’m not asking for money. I just play the guitar and people take pictures and sometimes they put money in.’ 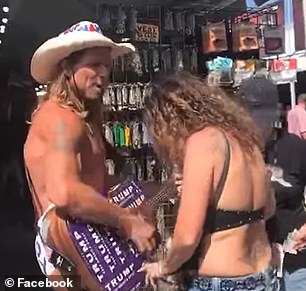 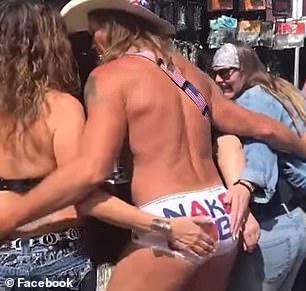 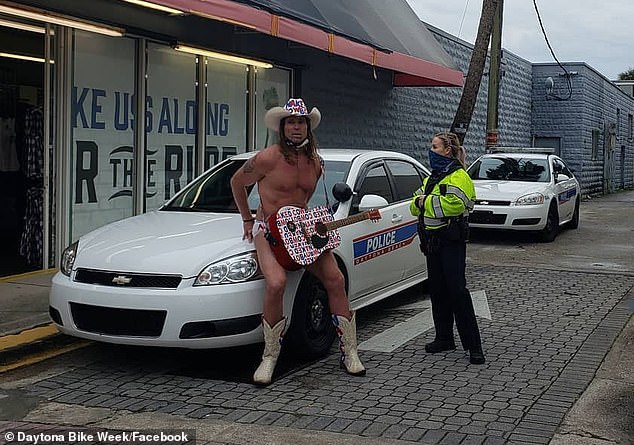 In the video, a small crowd gathered nearby can be heard booing the police, with one person calling out, ‘Free the cowboy!’ as Burck is taken into custody

However, Burck said he was willing to accept responsibility for the charges, telling the judge. ‘It was a pretty big ordeal. I was just mad. I wasn’t mad at anybody in particular.’

After conferring with the public defender, Burck said he wanted to settle his case there and then.

The judge dismissed the panhandling charge and Burck pleaded ‘no contest’ to the resisting arrest charge.

‘I find that your plea is knowing, voluntary and intelligent… supported by a factual basis with a full understanding of the consequences. I’ll accept your no contest plea,’ the judge said.

Burck was then sentenced to time served and ordered to pay $223 in court costs. 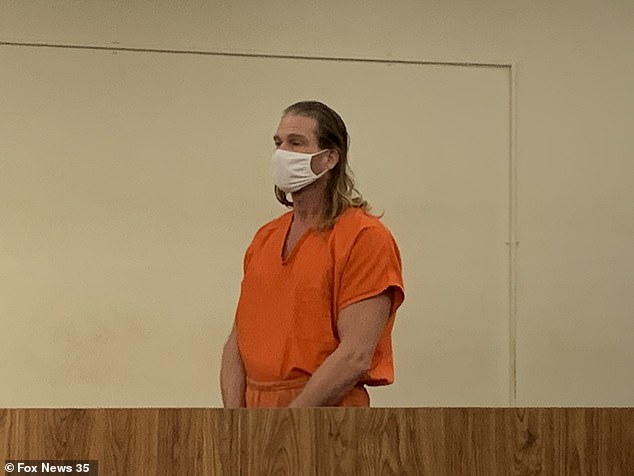 ‘I sing and play guitar in my underwear,’ Burck told a judge on Sunday. ‘I’m the Naked Cowboy from New York City. I’ve been coming down here 21 years in a row’ 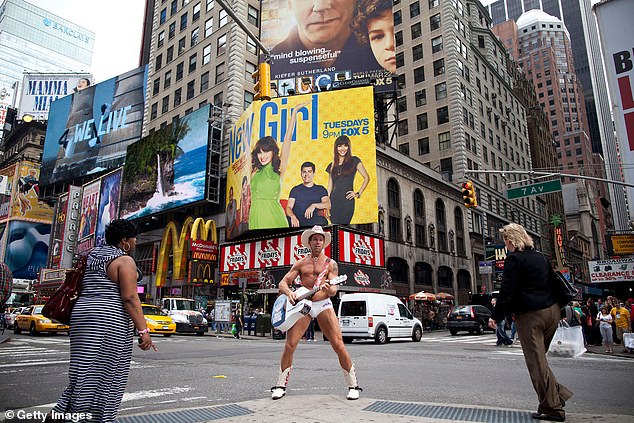 Burck is renowed for his Naked Cowboy act in New York City’s Times Square, where he performs in only white briefs, boots and a cowboy hat

Daytona’s annual Bike Week event starting on Friday and brought tens of thousands of motorcyclists to the city across the weekend.

The Daytona Regional Chamber of Commerce, which organizes the event, estimates 300,000 to 400,000 motorcyclists will attend. It typically draws 500,000.

‘We know it’s likely to be less just because of COVID concerns, as well as many still struggling to make ends meet due to loss of income from COVID,’ said Janet Kersey, the chamber’s executive vice president and chief operating officer.

In anticipation of the event, the city made a bargain with its bars – 60 per cent capacity indoors in return for the permits necessary for temporary outdoor sales and entertainment. 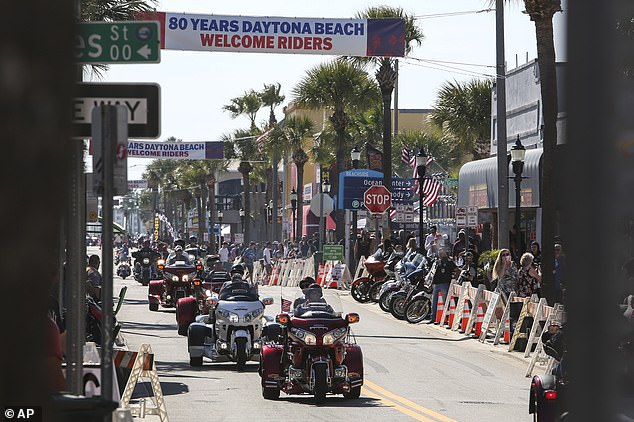 Despite the coronavirus pandemic, Daytona Beach’s annual Bike Week (pictured) brought tens of thousands of motorcyclists to the city over the weekend 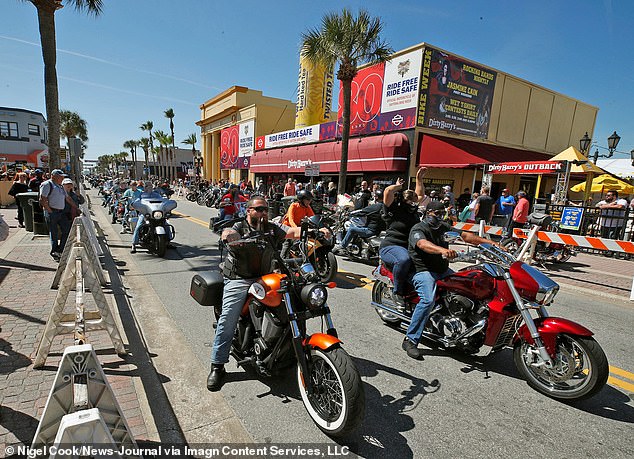 Daytona Beach is trying to avoid what happened at the Sturgis, South Dakota, motorcycle rally in August.

The Sturgis event led to a disputed number of infections around the country, ranging from several hundred to tens or hundreds of thousands.

As of Sunday, Volusia County has reported 35,159 cases of COVID-19 since the pandemic began, and 677 people have died.

The state of Florida, meanwhile, has reported 1.94 million confirmed cases and and more than 31,500 deaths. 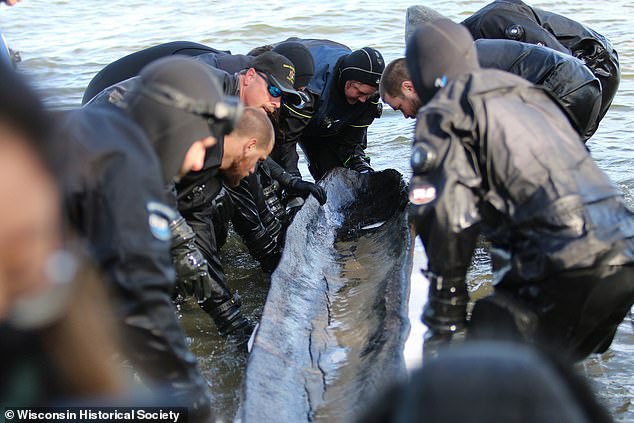