New York City is approaching a dramatic slowdown in its vaccination rollout with just 1,000 doses on hand after snowstorms moving across the country caused shipments of vaccine to be delayed.

‘Delayed shipments have put our entire vaccination effort at a standstill. As of this morning, New York City has fewer than 1,000 first doses remaining on-hand,’ Avery Cohen, a spokeswoman for Mayor Bill de Blasio, wrote on Twitter.

The harsh winter weather across the country is believed to have created a backlog of six million doses. 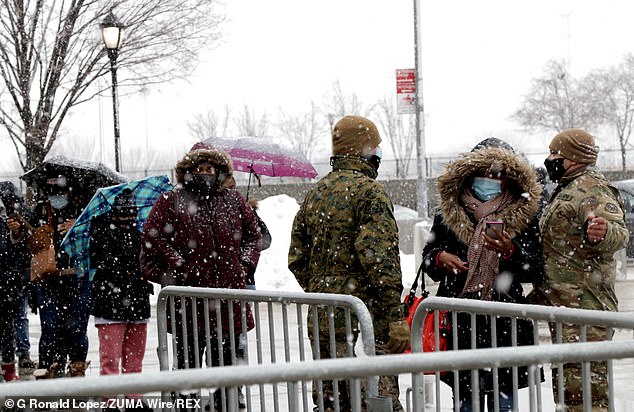 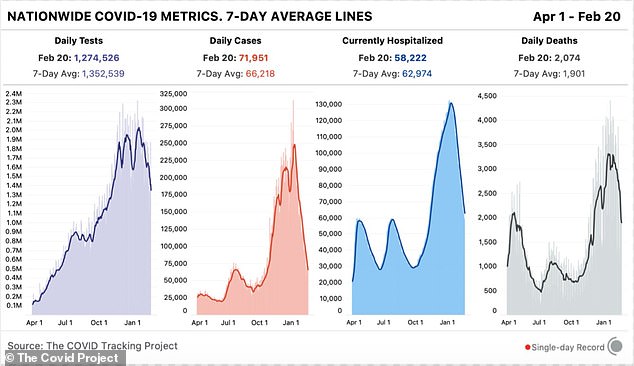 Saturday’s figures show there are currently 58,222 people in hospital with virus. Another 2,074 deaths reported on Saturday bringing total to 497,439 lives lost

It has led to local officials pleading with vaccination sites to extend their operating hours and cram in additional appointments.

The sudden halt to the vaccination drive comes as daily figures for Saturday show the number of people in hospital with the coronavirus continuing to fall with 58,000 recorded. It is the lowest number in more than three-and-a-half months.

There were 2,074 daily deaths recorded in the last 24 hours. The levels are now similar to those that were seen before the virus surges of last spring and summer.

When it comes to the vaccine effort, on Friday, New York City mayor Bill De Blasio explained that New York City had to delay the scheduling of up to 35,000 appointments for people’s first dose because of the shortage.

Those whose appointments were not cancelled over the weekend have still been able to receive their shots.

New York State is also scheduling appointments for new mass vaccination sites that opened in Brooklyn and Queens on Wednesday in a partnership with FEMA according to the New York Times. 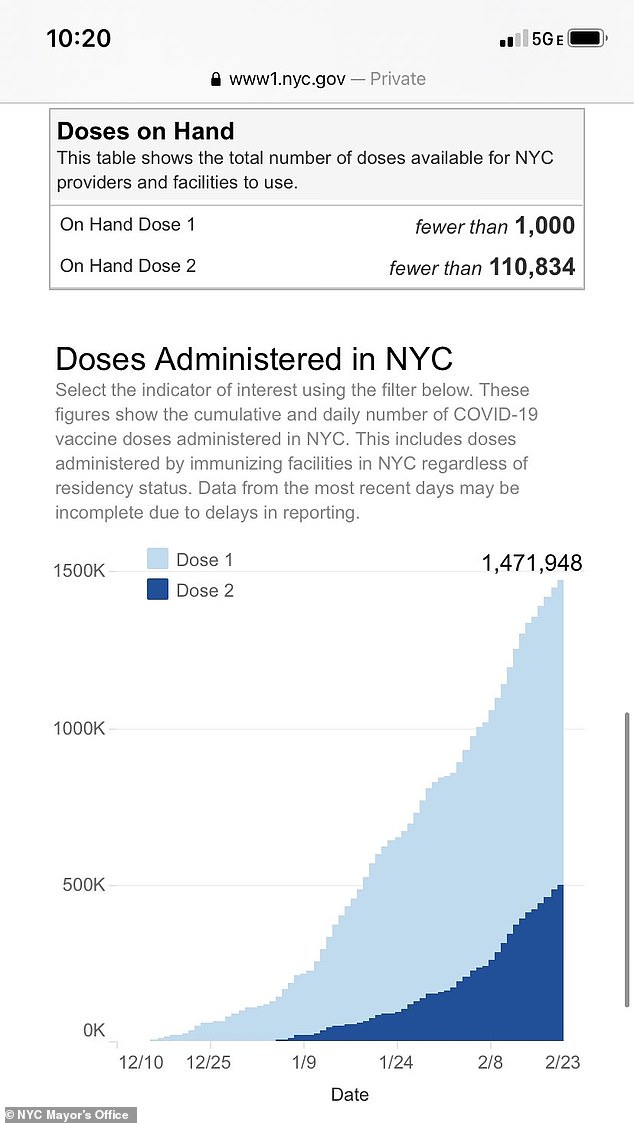 New York City is now down to fewer than 1,000 vaccine doses due to shipment delays 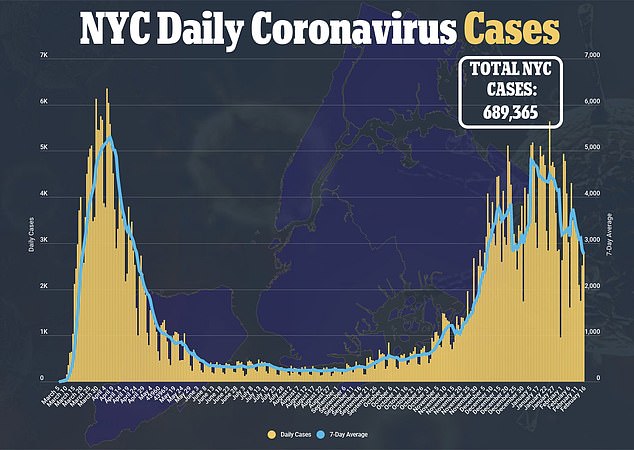 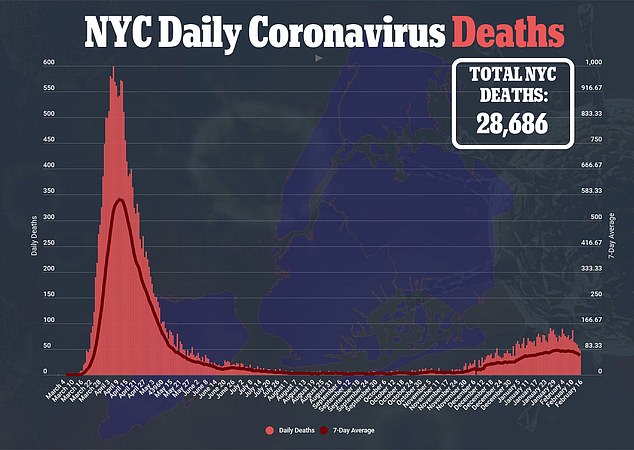 State officials said that they had received 40 percent of their vaccine allocation for the week, and that they expected the remainder would be distributed on Sunday.

The main reason for the slowdown came after the bad weather halted two key vaccine shipping hubs: the FedEx center in Memphis and a similar site ran by UPS in Louisville, Kentucky through which the batches pass through.

The Federal Emergency Management Agency noted that 2,000 other vaccine sites have been in areas that have suffered power outages.

In Texas, health officials said that more than 100,000 first doses and 300,000 second doses that were supposed to be delivered this week were still waiting to be shipped to Texas.

The missed doses are expected to arrive during the first half of next week.

In Houston, some vaccination sites reopened at the end of this week.

A new mass FEMA vaccination site at NRG Park in the city promises to vaccinate 42,000 people a week. 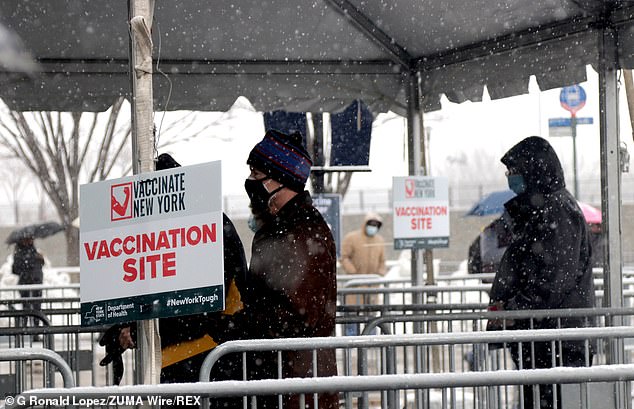 For those that have been fully vaccinated, the advice is not to shed masks and get back to normal activities right away. Such advice will be a disappointment, if not a shock, to many people.

In Miami, 81-year-old Noemi Caraballo got her second dose on Tuesday and is looking forward to seeing friends, resuming fitness classes and running errands after nearly a year of being extremely cautious, even ordering groceries online.

‘Her line is, ‘I’m tired of talking to the cats and the parrots,’ said her daughter Susan Caraballo. ‘She wants to do things and talk to people.’

But the Centers for Disease Control and Prevention hasn’t yet changed its guidelines: At least for now, people should follow the same rules as everybody else about wearing a mask, keeping a 6-foot distance and avoiding crowds — even after they’ve gotten their second vaccine dose.

Vaccines in use so far require two doses, and experts say especially don’t let your guard down after the first dose. 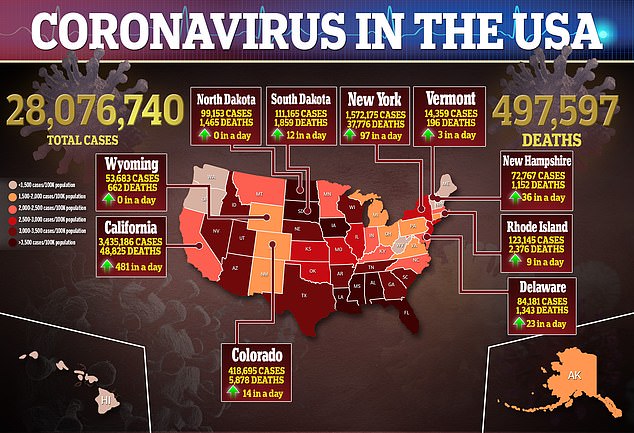 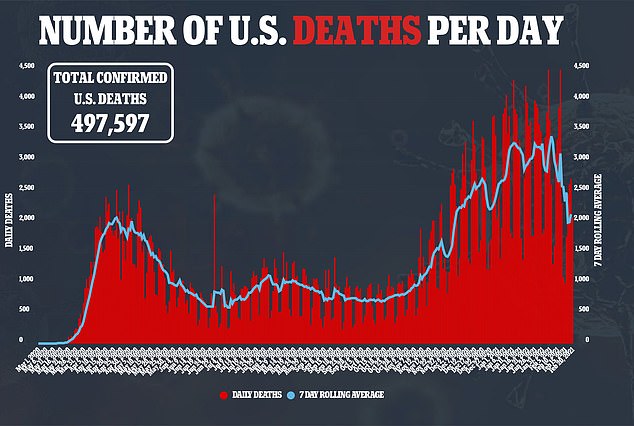 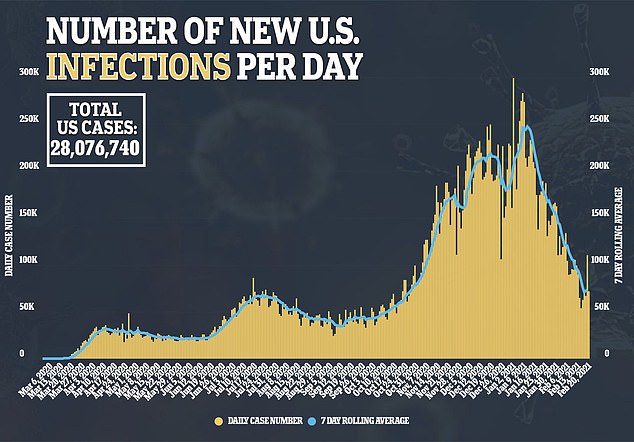 In that webcast exchange, Fauci only could point to the CDC’s recommendations, which so far are mum about exceptions for vaccinated people getting together. ‘Hang on,’ he told the woman, saying he expected updates to the guidelines as more people get the coveted shots.

What experts also need to learn: The vaccines are highly effective at preventing symptomatic COVID-19, especially severe illness and death — but no one yet knows how well they block spread of the coronavirus.

It’s great if the vaccine means someone who otherwise would have been hospitalized instead just has the sniffles, or even no symptoms. But ‘the looming question,’ Fauci said during a White House coronavirus response briefing last week, is whether a person infected despite vaccination can still, unwittingly, infect someone else.

Studies are underway to find out, and hints are starting to emerge. Fauci pointed to recent research from Spain showing the more coronavirus an infected person harbors — what’s called the viral load — the more infectious they are. That’s not surprising, as it’s true with other illnesses.

Some preliminary findings from Israel have suggested people infected after the first vaccine dose, when they’re only partially protected, had smaller viral loads than unvaccinated people who got infected. The findings are encouraging if they hold up.

Israel has vaccinated a large fraction of its population and scientists worldwide are watching how the outbreak responds as those inoculations increase.

Also critical is tracking whether the vaccines protect against new, mutated versions of the virus that are spreading rapidly in some countries, added Dr. Walter Orenstein, an infectious disease expert at Emory University. He’s been vaccinated and is scrupulously following the CDC guidelines.

There are practical reasons. ‘It’s hard to tell who got vaccinated and who didn’t if you’re just walking around the grocery store,’ noted University of Pennsylvania immunologist E. John Wherry.

And experts like Wherry get asked, repeatedly: Yes, there are rules for being in public, but what’s safe for Grandma to do at home, with family or close friends, after she’s vaccinated?

Not everyone’s immune system is boosted equally from vaccines — so someone with cancer or the frail elderly may not get as much protection as a robust 70-something.

But most people should feel ‘more confident about going shopping, for example, or going to see your grandkids, or giving your daughter a hug,’ Wherry said. 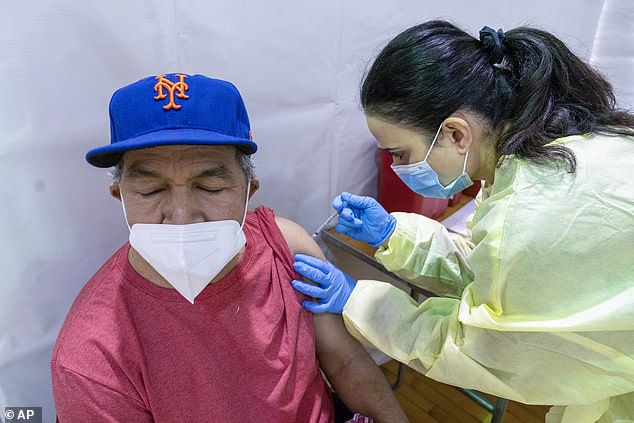 The Federal Emergency Management Agency noted that 2,000 other vaccine sites have been in areas that have suffered power outages

That’s because the chances of a fully vaccinated person getting seriously ill, while not zero, are low.

‘Friends coming over for dinner, we should still try to follow the guidelines,’ Wherry added. ‘You never know who is compromised, where the vaccine may not work as well.’

What if the fully vaccinated are exposed to someone who’s infected? The CDC did recently ease those rules: No quarantine as long as the vaccinated person shows no symptoms and it’s been at least two weeks but not longer than three months since their second dose.

Getting on an airplane? Vaccinated or not, the CDC still urges essential travel only.

International travel is an even tougher prospect. Expect countries that already have different quarantine and test requirements to come up with varying post-vaccination guidelines — especially since multiple types of vaccines, some better proven than others, are used around the world. There’s also the concern about carrying those worrisome mutations from one country to another.

Stay tuned for updates to the advice as more people get vaccinated. Meanwhile, don’t underestimate how important it is for the vaccinated to feel less anxiety as they run errands or go to work while still following the public health measures, said Dr. Luciana Borio, a former Food and Drug Administration scientist.

Even with a trip to the grocery store, ‘there was always this anxiety about, ‘Was that the contact that’s going to make me infected?’ Borio said. ‘That is a very powerful change in one’s living situation.’

H.E.R. rocks a velour blazer with barely-there plaid pants at the BET Awards in Los Angeles 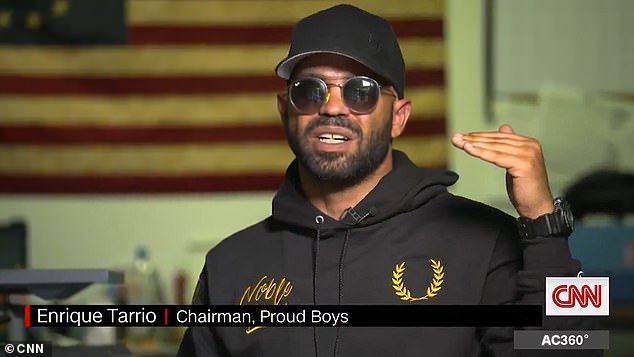 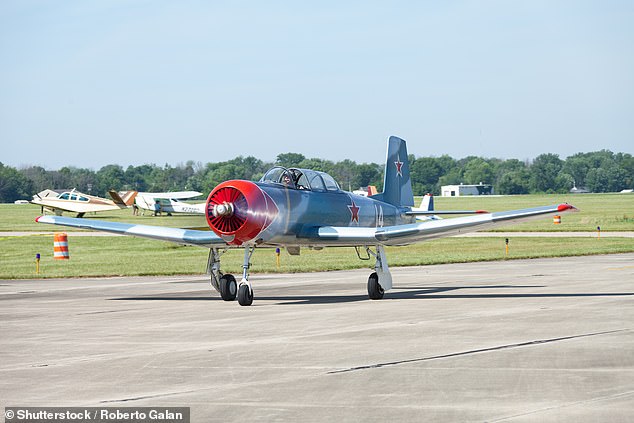 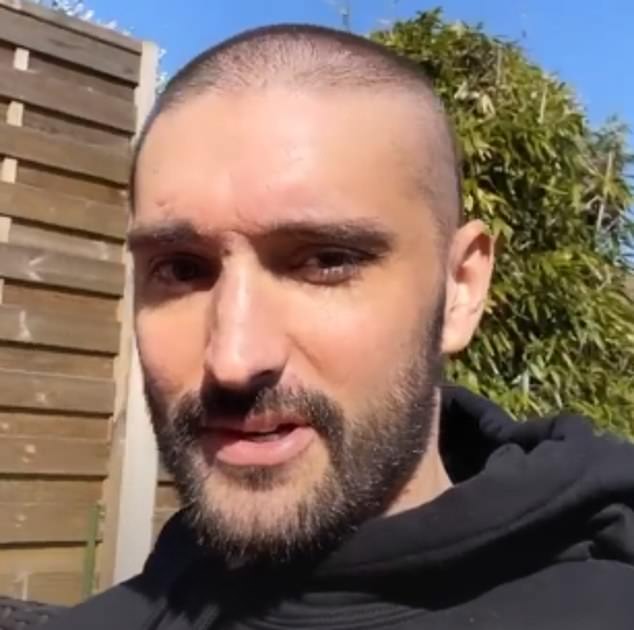