Two more lawmakers announced on Tuesday they tested positive for COVID – despite being vaccinated – as Washington D.C. supassed all other states in the nation in its coronavirus infection rate.

‘This week, I received a breakthrough positive COVID-19 test result. Fortunately, I have only mild cold-like symptoms. I know it could have been much worse had I not been vaccinated and boosted,’ Lee said in a statement.

‘After experiencing mild symptoms and a slight fever, Congresswoman Malliotakis, who is vaccinated, tested positive for COVID-19 yesterday. She is quarantining at home and is feeling well,’ her office announced.

The announcements come as Washington D.C.’s COVID infection rate hit a whopping 369%, the highest in the nation, as the Omicron variant spreads like wildfire across the nation. 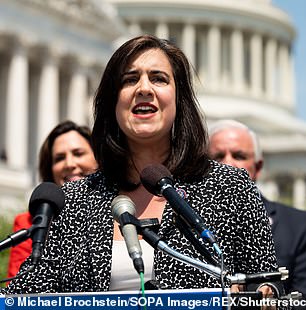 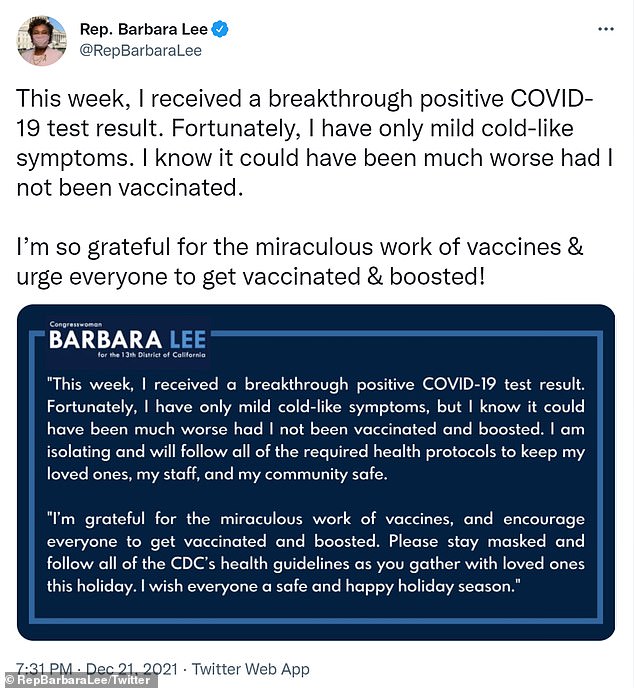 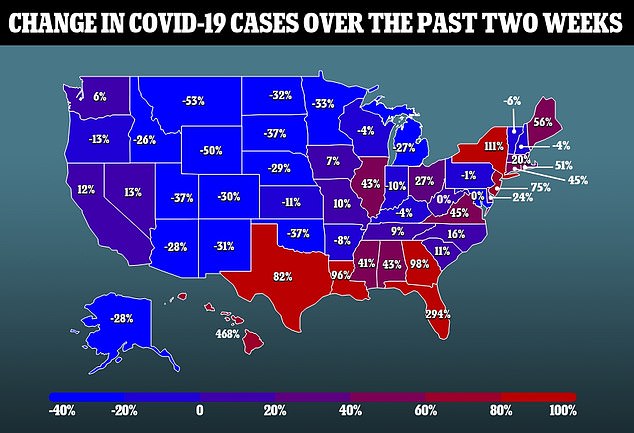 Earlier Tuesday, Democratic Rep. Matt Cartwright of Pennsylvania, announced that he, too, tested positive for COVID.

‘He tested positive on Saturday,’ his Communications Director Colleen Eagen Gerrity told Times News Online. She said Cartwright, who represents an area that includes Scranton, had received two vaccine shots. It was not known if he had received a booster shot.

He is quarantining at home after experiencing flu-like symptoms.

The number of members of Congress who have tested positive for the virus since the start of the outbreak in 2020 has now surpassed 100, according to a list kept by PBS News Hour.

The Senate and House have each gone home for its holiday recess, avoiding the chance of more transmission between lawmakers themselves, although many lawmakers hold events with constituents while away from Washington. 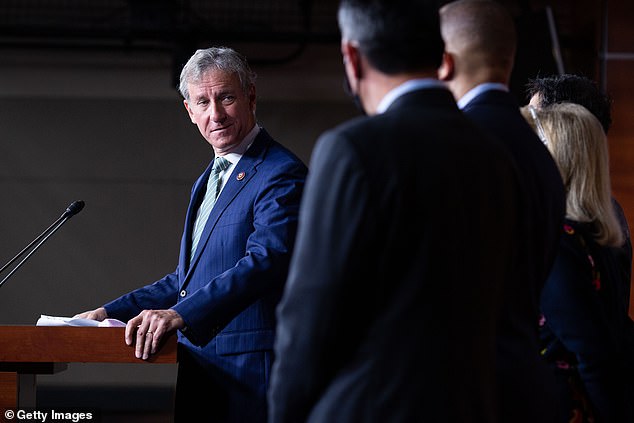 Democratic Rep. Matt Cartwright of Pennsylvania is isolating at home after testing positive for the coronavirus. He is one of four lawmakers to test positive in recent days. He received two vaccine shots, according to an aide 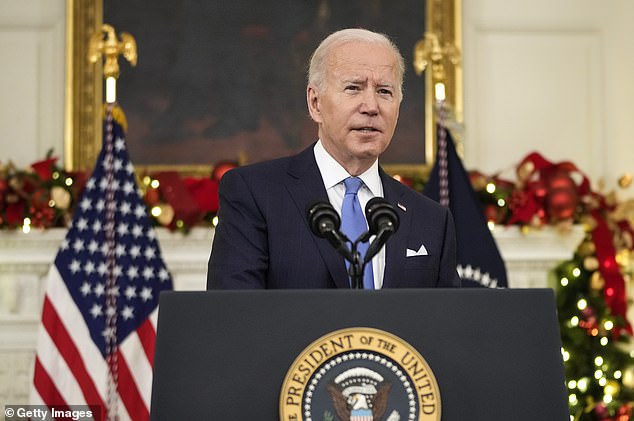 The spate of new infections among Democratic lawmakers is further fueling fears that the Omicron variant causing chaos around the globe has worked its way inside the United States Capitol.

The Centers for Disease Control announced Monday that it now accounted for 73 per cent of new U.S. infections.

The agency also revised last week’s data, increasing the share of the variant from 2.9 percent to 12.6 percent. This means the prevalence of the variant jumped six fold week-over-week. It has overtaken the Delta variant, which had been the nation’s dominant strain since July.

In New York and New Jersey, the Midwest, the Southeast, the Gulf Coast, and the Northwest, the Omicron variant now account for more than 90 percent of new cases.

While other regions currently have lower Omicron prevalence, the variant is spreading fast enough that officials expect it will be dominant throughout the country within weeks.

America also reported its first confirmed death from the variant on Monday night, when an unvaccinated Texas man between ages 50 and 60 succumbed to the variant.

President Biden, meanwhile on Tuesday, tried to calm American fears about a pandemic surge just in time for Christmas.

‘This is not March 2020,’ he said, citing the fact that 61.5% of Americans are vaccinated and the country is better prepared.

He once again pleaded with the unvaccinated to get their shots and he announced 500 million at-home COVID tests would be sent to Americans in the new year. Throughout the country the demand for tests surged and lines stretched around blocks as people sought to be tested before the holidays.

Biden also acknowledged it can be hard to get an appointment for covid testing – coughing into his hand as he made the point, as well as at another point during his remarks.

He spoke to Americans’ frustration with yet another surge. ‘We’ll get through this,’ he said from the State Dining Room of the White House.

He began his remarks by acknowledging ‘how tired, worried and frustrated I know you are. I know how you’re feeling. For many of you, this will be the first or even the second Christmas where you look across the table being an empty kitchen chair there. Tens of millions have gotten sick, all experienced upheaval in our lives.’

But he said the nation was ‘tougher’ than covid, ‘because we have the power of science and vaccines to prevent illness and save lives.’

It’s not just lawmakers. Maryland Governor Larry Hogan announced on Monday that he also tested positive for the virus.

‘This morning, as part of my regular testing routine, I received a positive rapid test for COVID-19. I have been vaccinated and boosted, and I am feeling fine at the moment,’ the Republican elected official wrote on Twitter.

‘As the Omicron variant becomes dominant, I want to urge you to get vaccinated or get your booster shot as soon as possible.’

Crow, who recently returned from a Congressional trip to Ukraine, revealed his diagnosis just after 9 p.m. Sunday night. 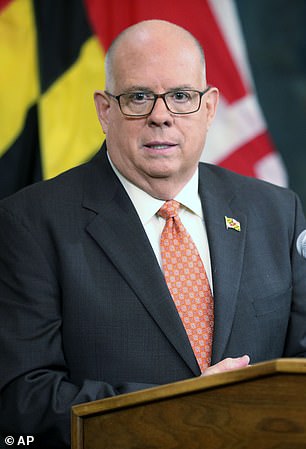 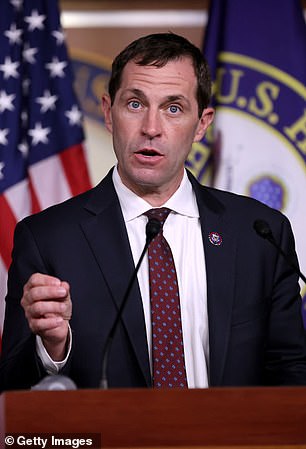 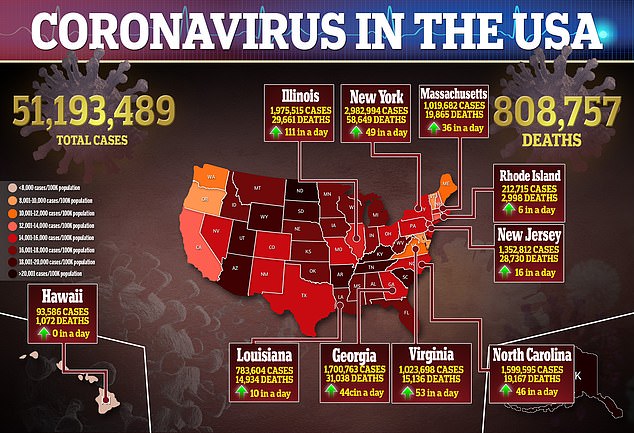 The military veteran said his symptoms were mild and credited the efficacy of his initial vaccines and booster shot for keeping him safe.

Like Warren and Booker did during their announcements, Crow used his illness as an opportunity to urge unvaccinated or un-boosted Americans to get their shots.

‘I just returned from an official congressional delegation visit to Ukraine and tested positive for a breakthrough COVID infection,’ Crow wrote.

‘I’m thankful to be fully vaccinated and boosted and experiencing only mild symptoms (the vaccine is safe and effective).’

In a follow-up post he continued, ‘Everyone eligible should get vaccinated and boosted to help prevent major illness and protect our community. I’ll continue to push for affordable access to rapid, reliable testing for all Americans.’

Crow is now isolating at home. 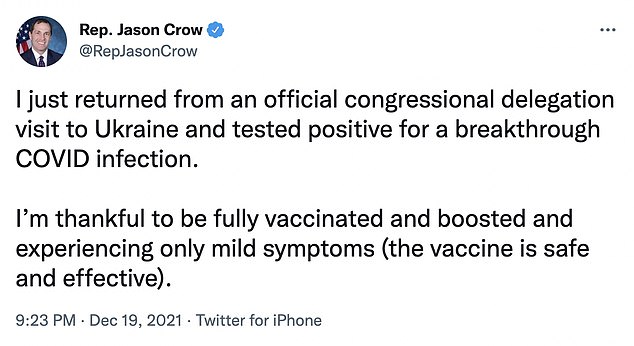 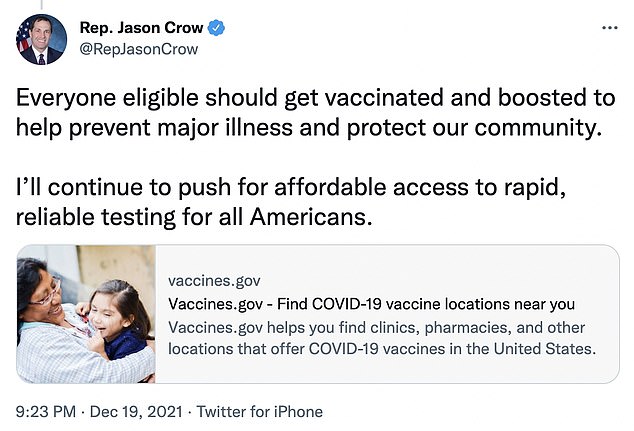 It’s not immediately clear who else was in the delegation to Ukraine. DailyMail.com has reached out to Crow’s office.

The number of Omicron cases in the US nearly doubled overnight from Friday to Saturday and has been detected in at least 44 states. As of Saturday morning, there were 830 cases of the new strain confirmed by DNA sequencing across the country, a 97 percent spike from Friday morning – but the number is likely much higher.

It’s not known if Crow, Warren and Booker are suffering from the Omicron variant or the still-more prevalent Delta strain.

Lawmakers who normally would be back home for the legislative holiday have remained in Washington, DC in a long shot bid to score a win for President Joe Biden’s agenda before the new year.

Warren, 72, was the first to announce her diagnosis and said her infection was mild and that she had both vaccine doses as well as her booster shot. 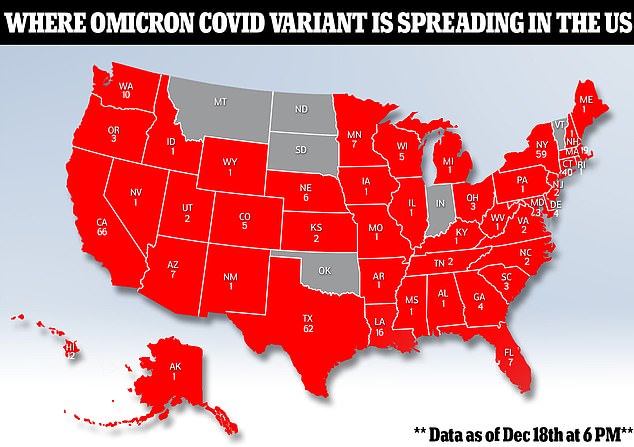 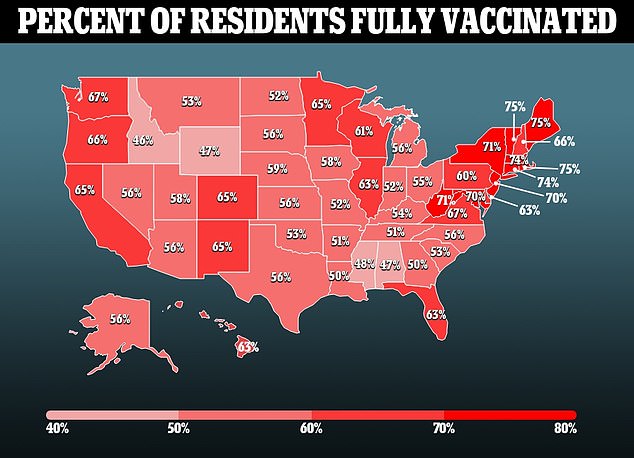 ‘I regularly test for COVID & while I tested negative earlier this week, today I tested positive with a breakthrough case,’ the progressive Democrat wrote.

‘Thankfully, I am only experiencing mild symptoms & am grateful for the protection provided against serious illness that comes from being vaccinated & boosted.’

She used her Sunday announcement to make a public plea for people who haven’t yet been inoculated to get it done.

‘As cases increase across the country, I urge everyone who has not already done so to get the vaccine and the booster as soon as possible – together, we can save lives,’ Warren wrote.

Booker, 52, also made the public announcement only a few hours after Warren had confirmed her own diagnosis. 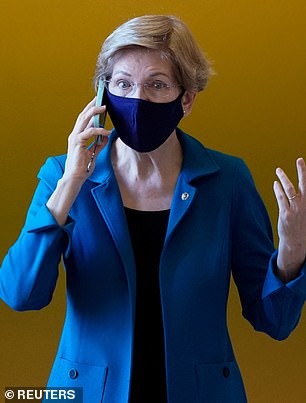 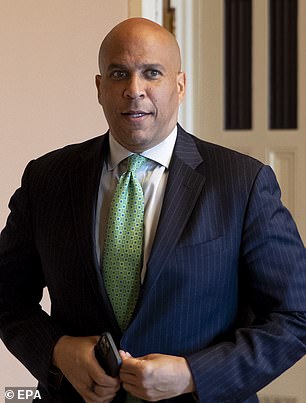 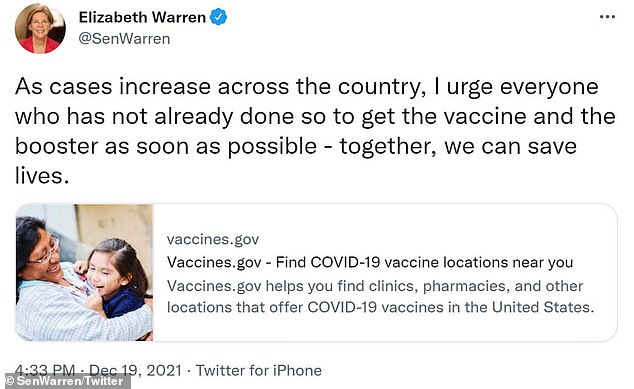 ‘I learned today that I tested positive for COVID-19 after first feeling symptoms on Saturday,’ he said on Twitter.

‘My symptoms are relatively mild. I’m beyond grateful to have received two doses of vaccine and, more recently, a booster – I’m certain that without them I would be doing much worse.’

The lawmakers’ positive diagnosis comes as the newly discovered Omicron variant wreaks havoc across the world just as people ready to gather for the Christmas holiday.

Warren became the ninety-second member of Congress to test positive for coronavirus since the pandemic began, making Booker the ninety-third and Crow the ninety-fourth.

One lawmaker, GOP Rep. Ron Wright of Texas, died after a battle with COVID in February 2021. Representative-elect Luke Letlow died of the virus a week before he was due to take office. 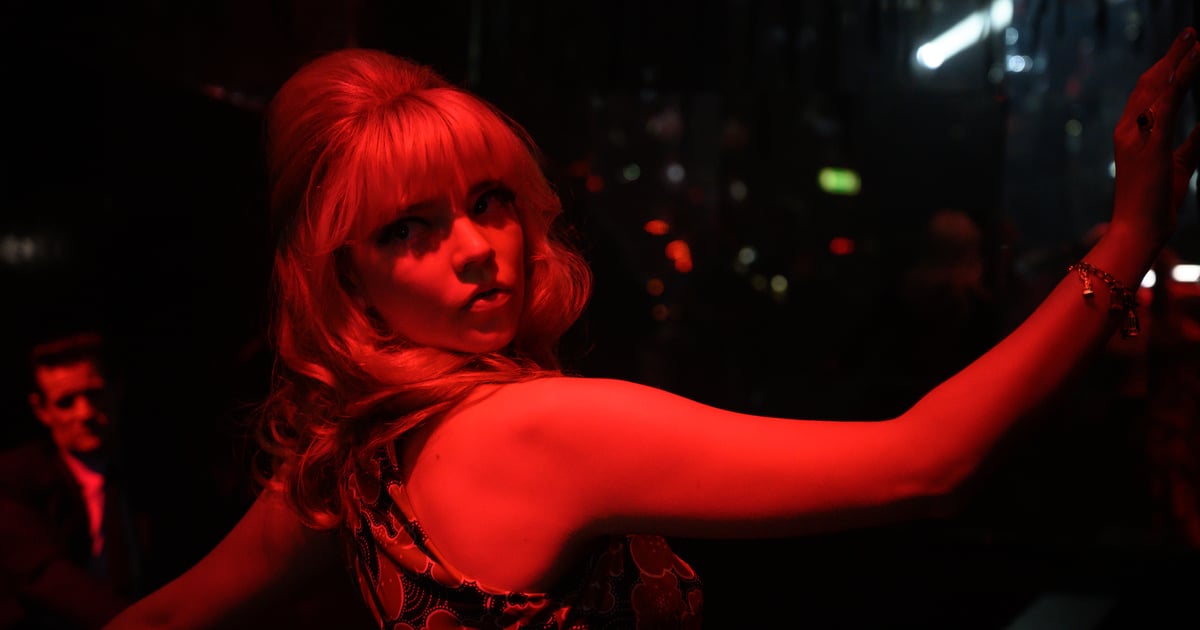 Anya Taylor-Joy Sings in Last Night in Soho — Is There Anything She Can’t Do? 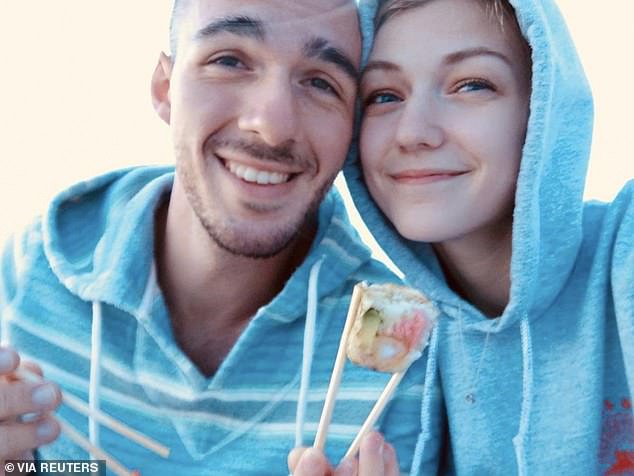 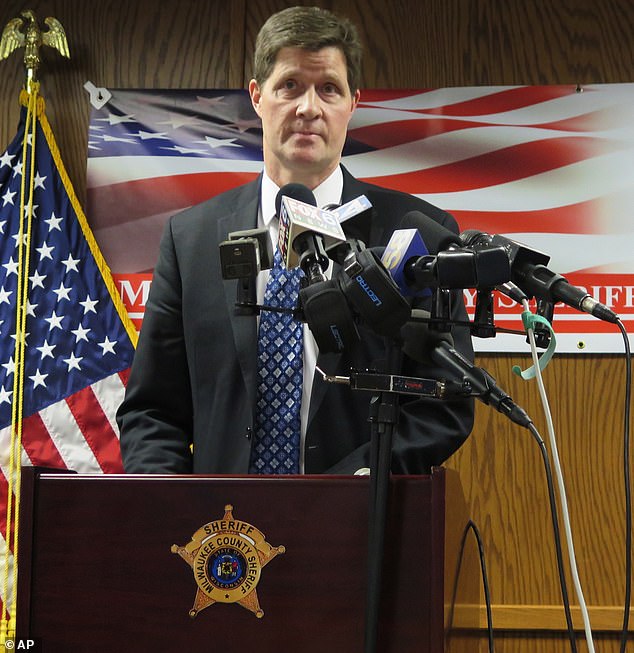 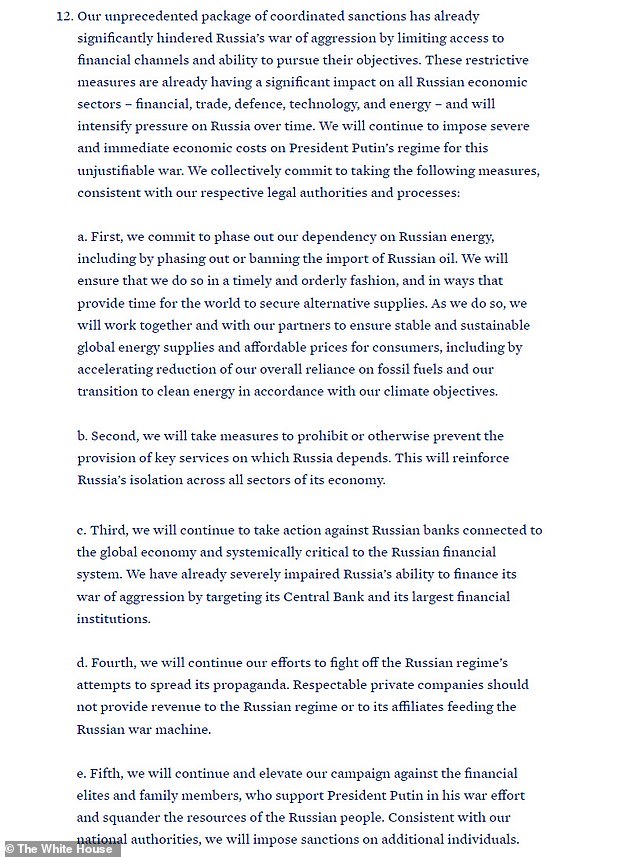 More tax for billionaires and quadrupled levy on corporate stock buyback: What Biden’s SOTU will say
18 mins ago