Travelers were trapped on a train from New York to New Jersey in the dark without bathrooms or electricity for ten hours after tracks were flooded by Storm Ida.

NJ Transit’s Train 3881 left New York’s Penn Station at 7:43 p.m. on Wednesday and was bound for Trenton when it became disabled east of Newark International Airport around 8:30 p.m., a spokesperson for the transportation agency told CNN.

Passengers crammed into cars at one end of the train after three cars at the other end took on a few inches of water, according to NJ Transit. Just a few hours into being marooned, the train’s air-conditioning and ventilation went with the electricity.

The roughly 200 passengers on board received some relief when cops arrived and opened the doors around 4 a.m. to give them water – but they remained stranded until a rescue train was able to tow them to the Newark Airport station.

From there, the passengers were able to get on other trains – with several recounting to CNN that they didn’t make it to their destinations until well after 7 a.m.

Ilia Rivera wrote in a post to social media that she had been stuck on the train since 7:43 p.m. 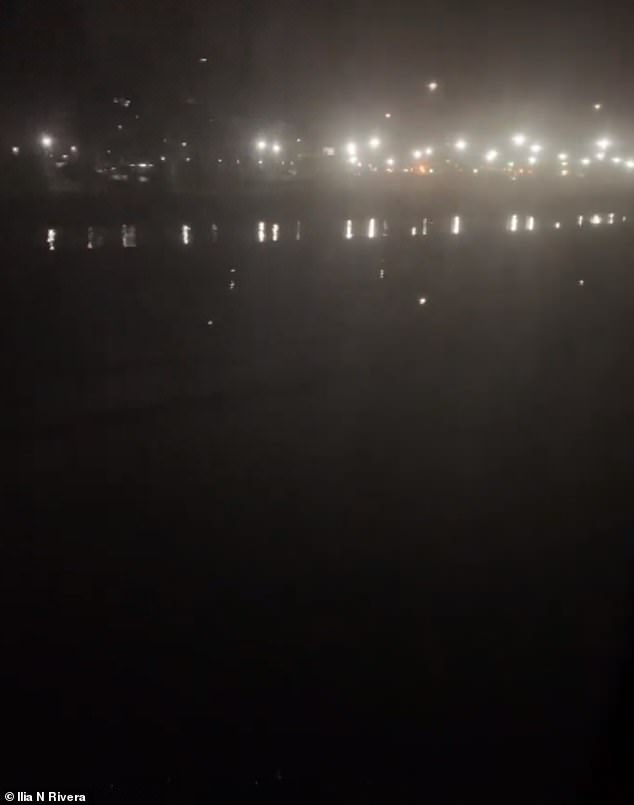 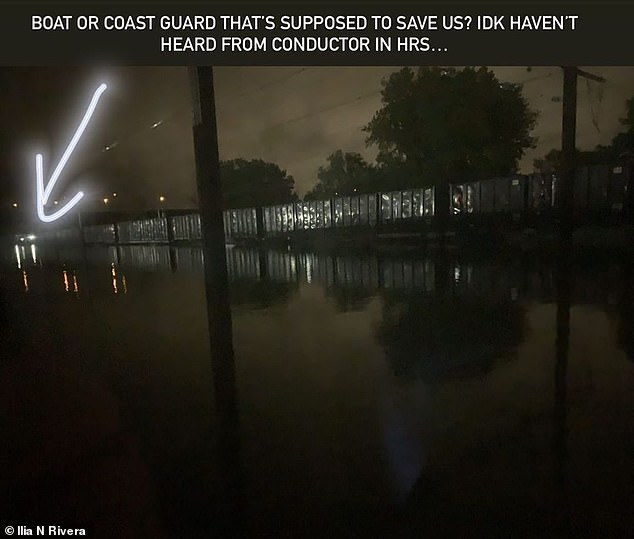 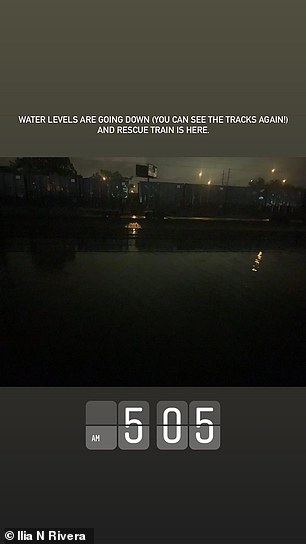 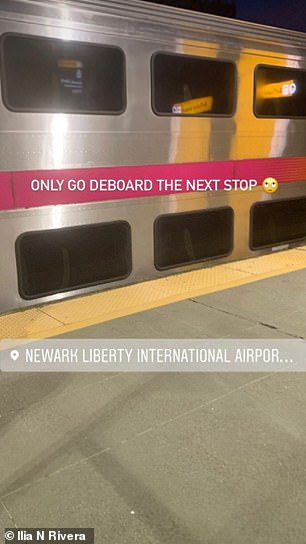 Rivera noted that a rescue train had finally arrived around 5:05 a.m., left, before she had to de-board at Newark International Airport 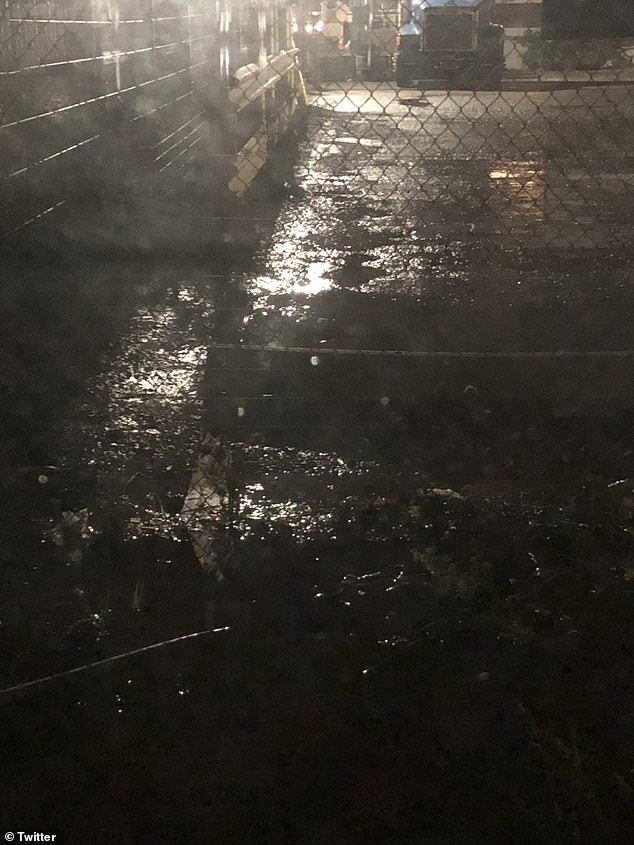 Twitter user Hue Hardon was also apparently on the train and wrote: ‘ The water is soooo high. Look at the picture. I can see ground to walk off the train but no word from the crew. No plan. No option to get out and walk home. On a train with no ventilation no lights.’

Camilla Akbari, 24, told the outlet she left the Big Apple to visit her mother in Princeton, New Jersey.

She said that, after she was trapped on the train, it took her another four hours to reach her mother’s house – two spent on another train to Trenton and two in the car after her mom picked her up as they drove on flooded streets to Princeton.

On a normal day, the trip from Penn Station to Princeton takes just over an hour.

‘We were literally and figuratively in the dark for hours,’ Akbari told CNN, claiming that officials had given them false promises throughout the night.

She said agitated passengers started to smoke cigarettes and marijuana as others were on the brink of having panic attacks.

Akbari said she also started to panic and was shaking by the time the doors were opened around 4 a.m., adding that it has become easier to look back on now that she no longer remains stranded.

‘I could tell I was shaking a little bit, there were tears in my eyes, just because I was so overwhelmed by the situation. So it was definitely frightening,’ she said.

She added: ‘It definitely was an adventure.’ 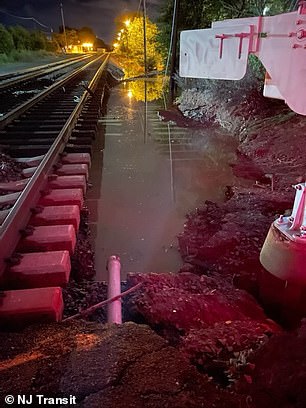 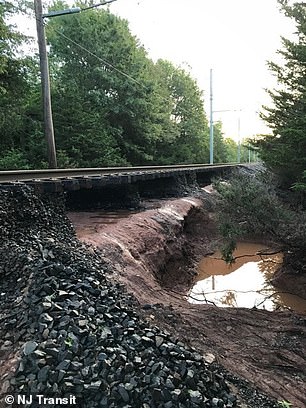 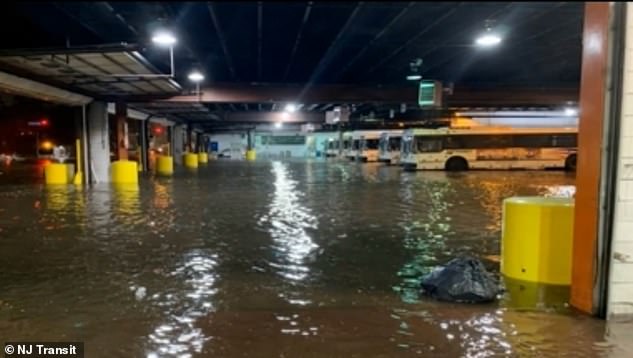 DailyMail.com has reached out to Akbari and other passengers for more information and additional comment.

Akbari and other passengers recounted how they were told that the train had suffered a mechanical issue and they would need to wait for a rescue train that took hours to reach them.

Alexandra Patino, 30, was traveling from Queens to see her boyfriend in Edison, New Jersey – where she arrived around 7 a.m.

‘The updates were just so terrible, and no one was really letting us know what was happening,’ she said.

Ilia Rivera, 30, jumped on another train to Elizabeth, New Jersey and made it to her destination around 7 a.m. She told CNN that flood waters had risen almost as high as the train’s windows.

‘I’m sitting literally right next to the window, and I see the water at my level almost,’ she said. ‘I’m like, ‘Am I going to have to swim out of here?” 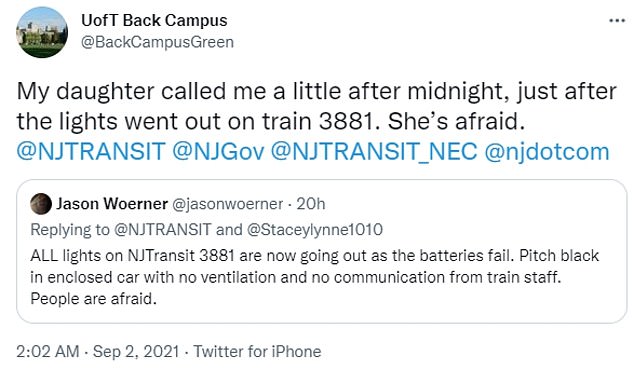 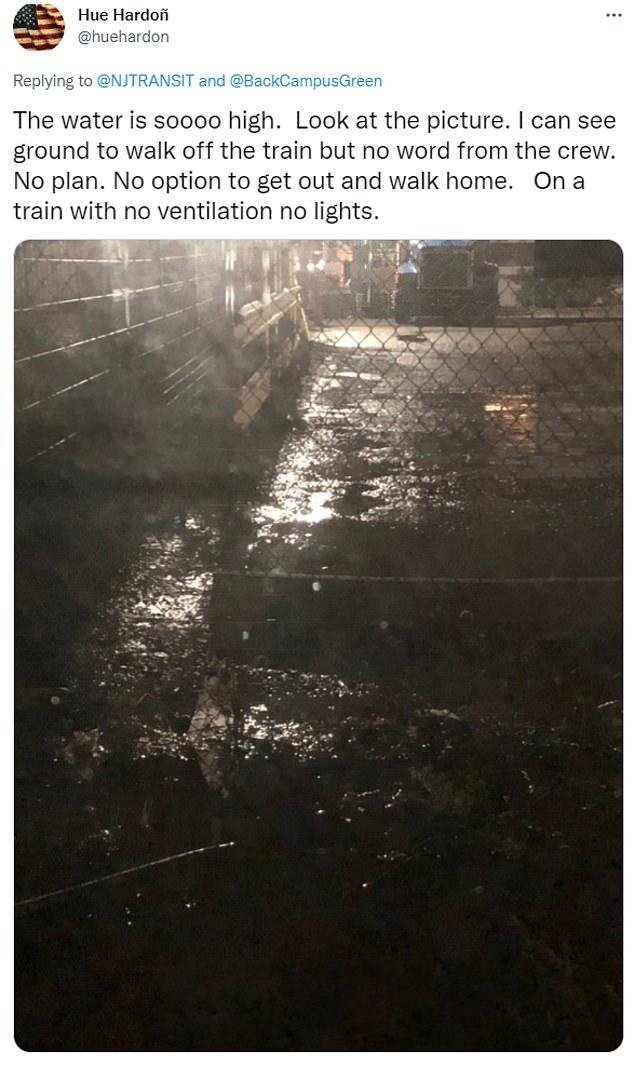 Rivera noted that rescue crews had arrived hours before the rescue train had finally arrived but hadn’t done anything to get the passengers off the train.

In a tweet around 3 a.m., NJ Transit said crews with the transportation agency and the Newark Fire Department were on scene and ‘have been desperately trying to get the rescue vehicles to the train.’

‘However, the water around the train is simply too high for a safe evacuation. The train is safest right now while first responders examine other options,’ NJ Transit tweeted.

A spokesperson for NJ Transit told CNN: ‘The decision to keep the customers on the train was the safest choice as the train cars were sufficiently elevated above the flood waters.’

Ian Wolsten, 27, was returning home to East Brunswick, New Jersey from work and finally made it home around 6:45 a.m. after getting on another train to its Metro Park stop, he told CNN.

‘Once the power was cut off from the trains, it was absolutely helpless,’ Wolsten said.

‘It’s one thing for it to be pitch black in there, because we’re sleeping anyway, but there was no air conditioning and no ventilation, so you think with COVID, it’s like, ‘What the hell is going to happen if the air is not going anywhere?’

Twitter user Hue Hardon was also apparently on the train and wrote, sarcastically: ‘The water is soooo high. Look at the picture. I can see ground to walk off the train but no word from the crew. No plan.’

‘No option to get out and walk home. On a train with no ventilation no lights,’ Hardon tweeted.

Many others also took to Twitter to plea for help from NJ Transit as they were stuck on Train 3881.

NJ Transit had suspended all train services on Wednesday except for its Atlantic City Rail Line – though most train service has since resumed with significant delays.

‘NJ TRANSIT service will continue to be subject to significant delays, cancellations and detours as storm damage is assessed and necessary inspections are made.’

The subway system had flooded in 46 locations, leaving 15 to 20 subway trains stranded, said Janno Lieber – the acting chair of the MTA. Two of the MTA’s Metro North commuter trains were also stranded.

Frank Dwyer, spokesman for the Fire Department of the City of New York (FDNY), told CNN that firefighters had to save hundreds of people from subway stations.

Beverly Pryce, a nurse, took an Uber from her home in the Queens borough of New York City to a bus station to try to get to work – but no buses were running.

She said she was stuck at the station until she made it onto a 7 train that took her to Times Square, where she arrived around 11:30 p.m. and had to stick out the night.

‘I’ve never seen nothing like this,’ she said. ‘I didn’t expect it to be this severe. I would not leave my house.’

Robert Hedglin left work in Manhattan around 9 p.m. and finally made it to his home in Queens early Thursday morning.

He told CNN that his train was stuck underground between two train stations for more than an hour where he was forced to get off.

‘I’m exhausted, frustrated, but at least I got home safe. Some others were not as lucky,’ Hedglin said. 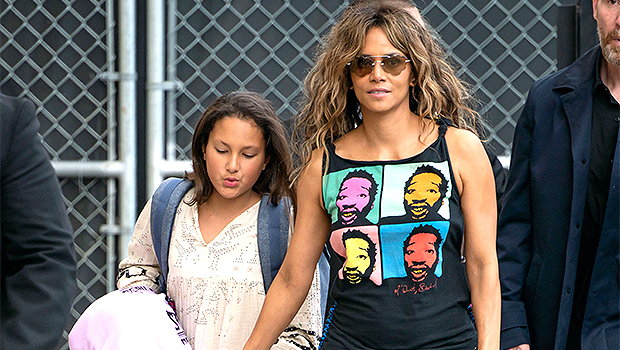 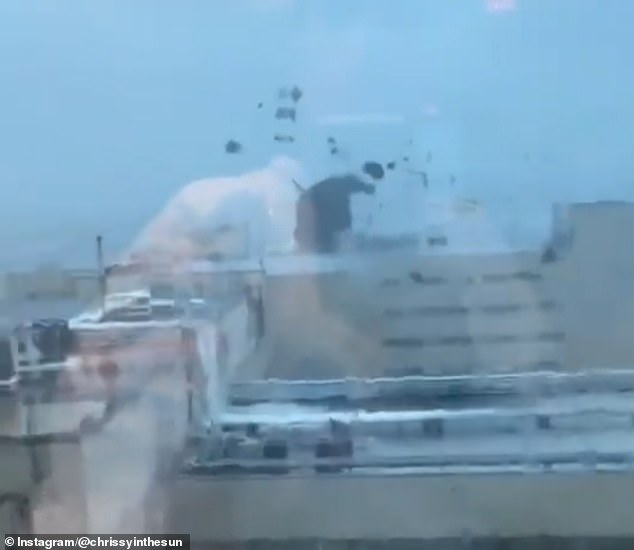 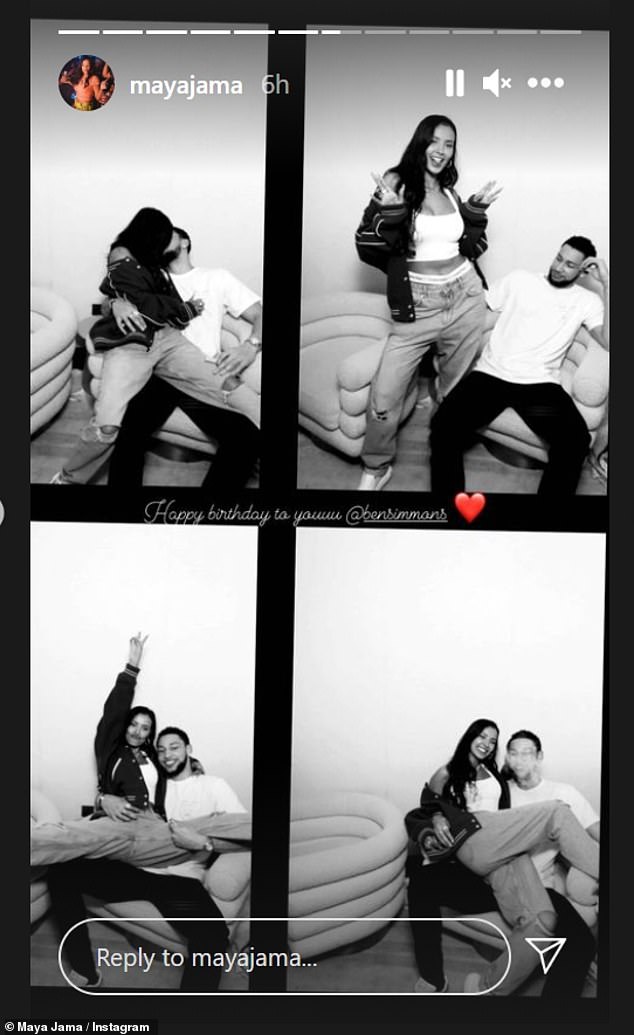 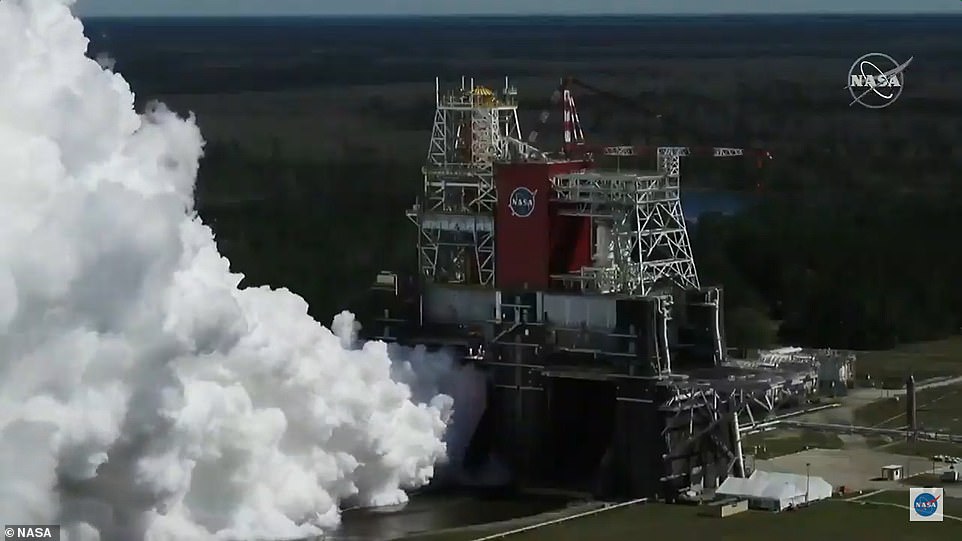