The New York Times has abandoned a popular Facebook cooking group with 77,000 members after it reportedly ‘lost control’ and didn’t want to carry on paying staff to moderate the comments.

The Cooking Community Facebook group was founded in 2019 by the media giant and was known as a ‘happy corner of the internet’ with around 8,000 members where people showed off their latest creations and crowd-sourced advice on technical recipes.

But after membership swelled to the size of the city of Scranton, Pennsylvania, a tumultuous few months during the outbreak of the pandemic and the run-up to the presidential election in 2020, as well as several accusations of racist comments, moderators have grown tired of monitoring the cat fights and decided to give up.

In a message posted to members on Tuesday The New York Times wrote that they would be handing the group over to the members to moderate themselves and removing all Times branding.

In the message The Times wrote: ‘It is time to hand this group over to you, its members.’

They added that they were looking for a group of ten to 20 moderators to step forward, after which the Times would remove all branding.

In a surprise message posted on Tuesday The New York Times announced it would not longer run its popular Community Cooking Facebook group which has 77,000 members 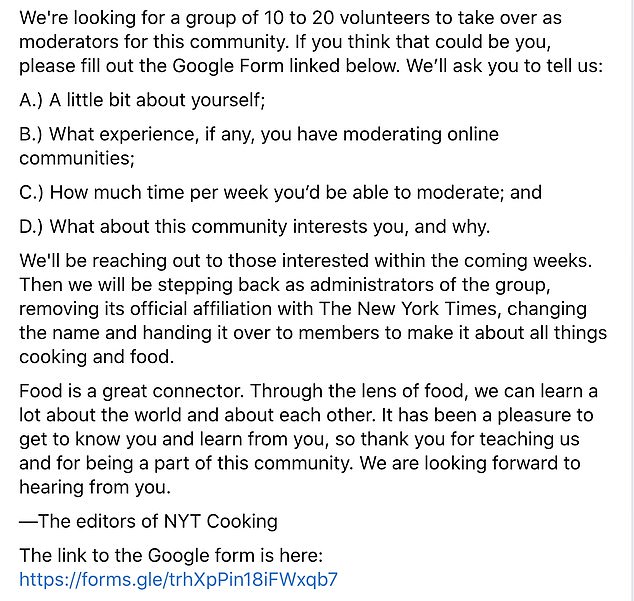 Times media columnist Ben Smith tweeted (pictured) cooking editor Sam Sifton who told him that the decision was made because of the time needed for staff to moderate the thousands of comments on Facebook, rather than work for the media company 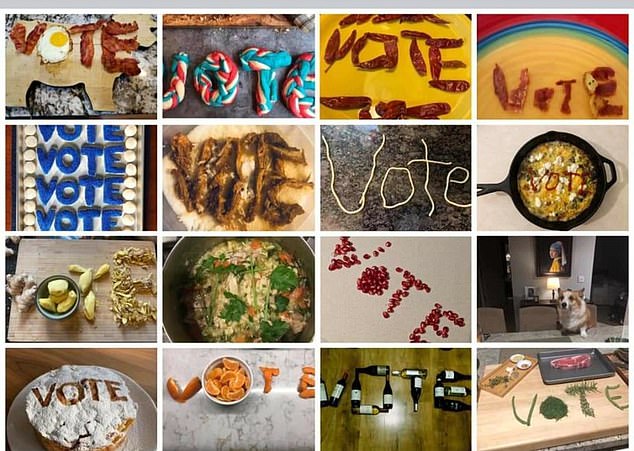 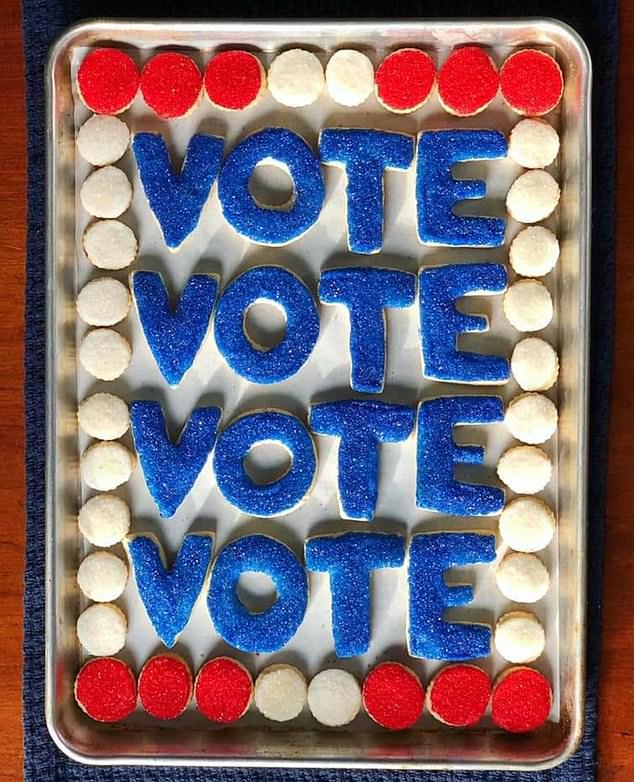 The Times wrote to members at the time and said that the group was ‘not for politics’ and urged them to remain politically neutral with their photos of food, after several members got into fights over which candidate to vote for 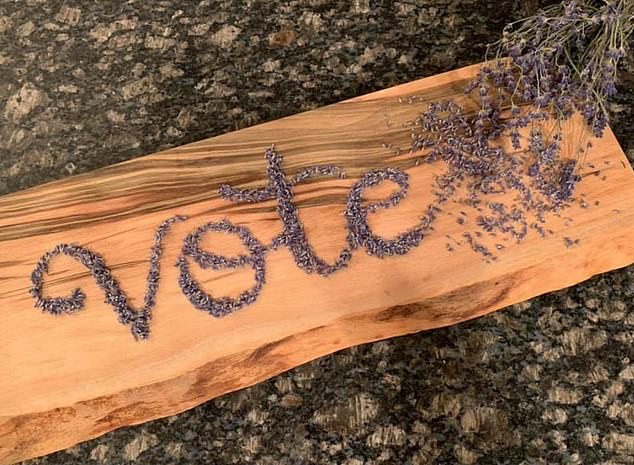 The New York Times said it would not remove the ‘vote’ pictures, created using food, as long as they did not discuss candidates 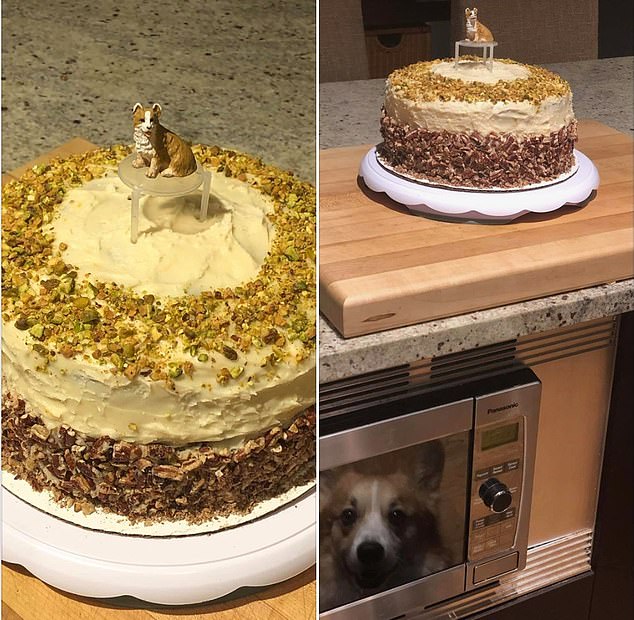 The Facebook group also became a popular place for people to post photos of their pets (pictured), rather than just recipes, which was one of the reasons behind the Times letting it go, the cooking editor Sam Sifton said

Sam Sifton, food editor at The New York Times, told the paper’s media editor Ben Smith that there was no single ‘crisis’ but that the group had morphed into a place where ‘a lot of people…want to post pictures of their dogs next to their soufflé’ and ‘not a place where we were going to March people toward NYT Cooking.’

NYT Cooking is a subscription based service costing $40 a year, and is an increasingly large revenue driver, growing 59.4% in 2020, to $54million.

Sifton added that given the change in the group’s nature, it had become a drain on Times resources.

He said: ‘[That’s] a Times employee moderating comments for fb rather than working for the Times.’

Writer Erin Baba tweeted: ‘The NYTimes has lost all control over the Cooking Community Facebook group they created and so instead of moderating it they’ve decided to completely abandon the 77,000 member group to its own recognizance and take their name off of it. Which is somehow absolutely hilarious to me.’

Member Marwa Ali Alta’ee, who lives in Baghdad, told The Nieman Lab that the Times walking away felt like ‘I was going to get fired from my job and won’t be able to be with my friends again.’

She added: ‘I love the group. I love its members. I became friends with many of them. I learned so much from everyone. Learned about their traditions, celebrations, dishes…and I feel I managed to shed the light on my country, Iraq. So many people thought of Iraq as a war zone! I showed them the opposite!’ 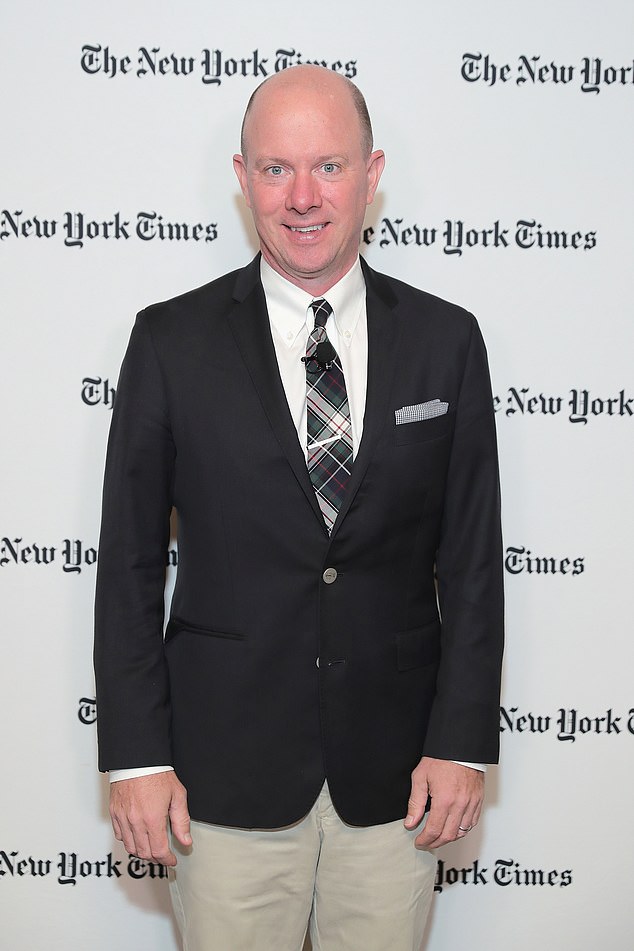 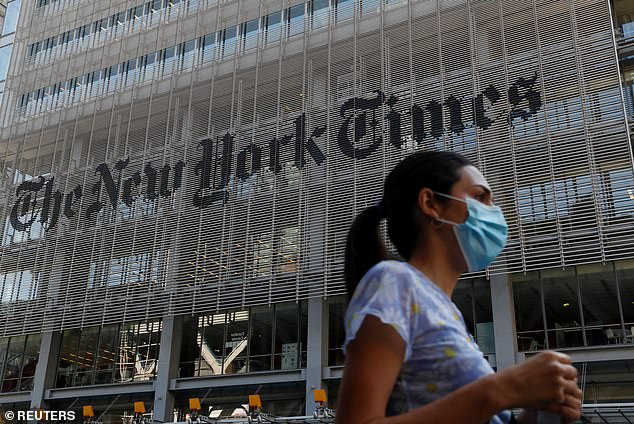 The New York Times made $54million in 2020 from its subscription based cooking section. But it decided to no longer moderate the community Facebook group, due to it being a drain on resources 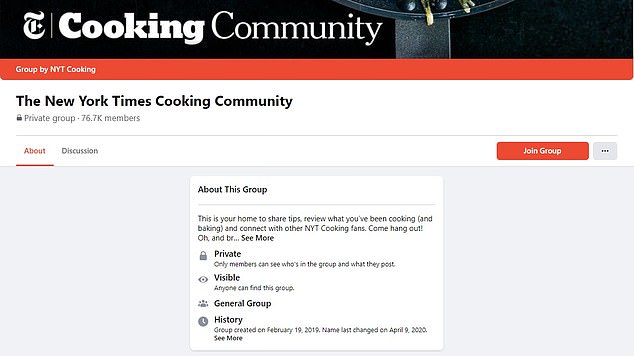 The Cooking Community Facebook group was founded by The New York Times in 2019 as a place to share recipes, but moderators allegedly ‘lost control’ when membership grew to 77,000

Although the group was initially founded in 2019 as a way for people to share recipes from The New York Times, it quickly evolved into much more, with members using it as a way to talk about food and post pictures of their dinners and pets.

It drew comparisons with The Great British Baking Show as a ‘happy corner of the internet’.

After the start of the pandemic in spring last year fights began to break out when members would post photos of tables set for larger than just their immediate family or in places not wearing masks or asking for recipes for ‘large groups’.

In October last year Buzzfeed reported that the group had fallen into disarray over politics in the run up to the election.

It reportedly began to spin out of the control of the New York Times moderators when one member wrote a post that favored a candidate and had his post deleted.

People took to social media to discuss the news, with writer Erina Baba saying that the Times had ‘lost all control’ of the group

In October a moderator wrote to members and warned them: ‘There are many places to express your political views; this is not one of them.’

Over the last two years there have also been reported instances of ‘racist behavior’ in the group, including one post about the flavor enhancing seasoning, MSG, which is used in many Asian cuisines, as well as cultural appropriation of recipes.

There were also complaints from members that the group would often be shut down without notice if the moderator took a holiday.

In January one member wrote: ‘Dear admins. What the actual hell happened over the holidays? Next year, recruit some other folks to cover whilst you read and relax or run off in the middle of June when no one will miss you. That was bad.’

Frances Caslin Rothstein, a group member from Jacksonville, told The Nieman Lab that the reason the New York Times dropped the group was not because of subscription reasons, but something else: ‘Some claim it is [money], that NYT didn’t get enough new subscriptions, but I believe moderators got exhausted and disgusted.’

She added: ‘The last thing I expected was the destruction of a great group.’

Victoria Hall, a group member in Portland, Oregon, said: ‘I joined for the elevated cooking and stayed for the family. It would be my hope that the group carries on in the same fashion, with great recipes, advice, and the occasional #fridgedoorchallenge.’ 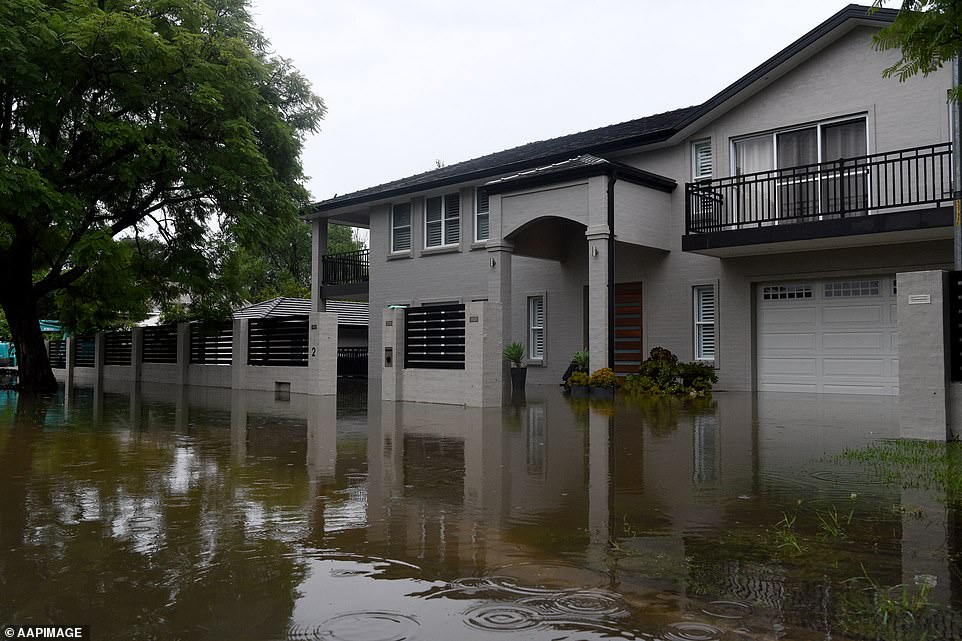 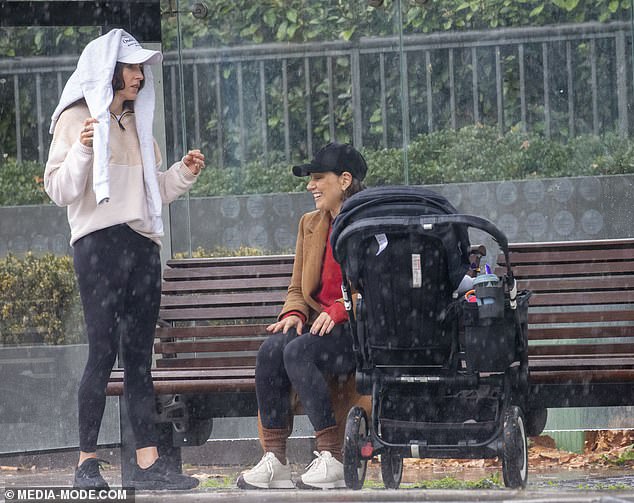