Five cases of the COVID-19 Omicron variant have been confirmed in New York state, officials confirmed on Thursday.

‘New York State has confirmed five cases of the omicron variant,’ Governor Kathy Hochul said in a statement. ‘Let me be clear: This is not cause for alarm. We knew this variant was coming and we have the tools to stop the spread.’

The development comes after it was revealed that a recent visitor to the state tested positive for the Omicron variant.

The state recorded 11,300 new cases on Thursday, the highest single-day total since January, when the nation was in the midst of the devastating third wave.

It comes hours after a Minnesota man who had attended the Anime NYC convention last month in Manhattan was found to have been infected with the Omicron variant.

While no cases of the variant have been detected in the state yet, New York City Mayor Bill de Blasio said Thursday that it is likely others in the city have been infected as well.

New York state recorded 11,300 new COVID-19 cases on Wednesday, the highest total since a massive winter surge in January 2021. The increase comes after a case of the Omicron variant in Minnesota was tied to an anime convention held in New York City last month 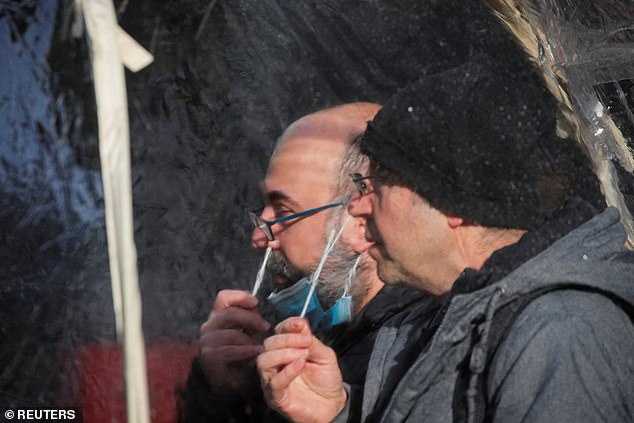 Less than 4% of positive COVID-19 tests in New York are sequenced to find what variant they are of, meaning it is possible that existing Omicron cases have so far gone undetected. Pictured: Two men in New York City, New York, take COVID-19 tests on December 1

The variant was discovered by South African health officials last week, and while not much is known about it yet, it is was recently found to be 2.4 times more infectious than previous variant.

Due to its high number of mutations, it’s also believed to be vaccine evasive, though cases have mostly been very mild.

January 31 was the last time New York recorded more than 11,200 cases in a single day, as a disastrous early 2021 Covid surge begin to wind to an end.

While the state did experience an uptick of cases during the summer Delta wave, the early autumn season has already topped the high of around 6,000 cases per day over the summer.

Currently, New York sequences under four percent of positive Covid tests, meaning that any Omicron cases among the 96 percent that are not sequenced would not be detected.

The state, and specifically New York City, is on high alert now after news of a man who recently traveled to the city having the variant.

Minnesota health officials revealed on Thursday that a man from Hennepin County, which includes Minneapolis, was discovered to have the second case of Omicron found in the U.S.

The man attended Anime NYC last week, a three day event that ran from November 19 to 21 at the Javits Center in Lower Manhattan – along with around 53,000 attendees from around the nation.

He returned to Minnesota, and began feeling symptoms of Covid on November 22.

Two days later, on November 24, he tested positive for Covid. 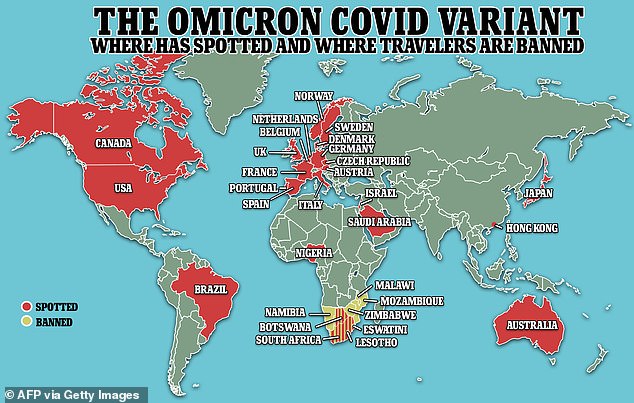 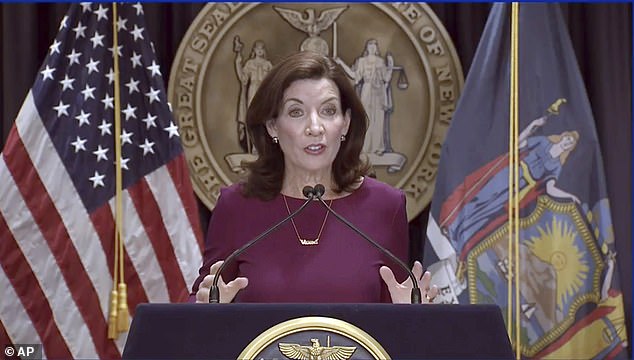 Officials report that his symptoms were mild and have already resolved, he also abided by public health protocols after he tested positive.

He had no recent history of international travel, making it clear that he contracted the virus inside of U.S. borders – meaning the variant has already been circulating within the country for at least ten days.

The man is fully vaccinated as well.

‘We are aware of a case of the Omicron variant identified in Minnesota that is associated with travel to a conference in New York City, and we should assume there is community spread of the variant in our city,’ de Blasio said in a statement.

‘We are working closely with the State and the CDC, as well as the Javits Center’s event organizers, and our Test and Trace Corps will be contacting conference attendees. This conference required masks and complied with our Key2NYC requirement to mandate vaccination.’

He also urged any Anime NYC attendees to get tested as soon as possible. 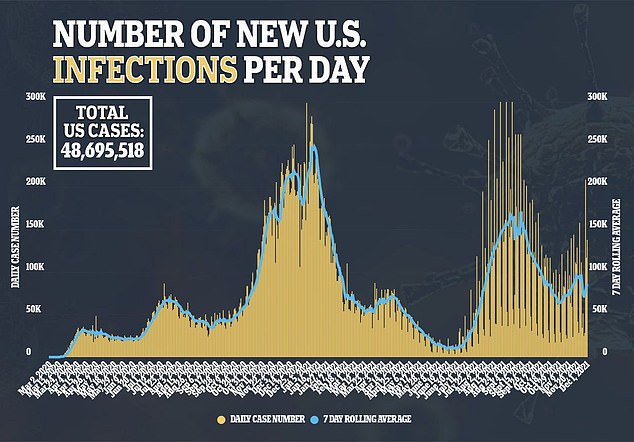 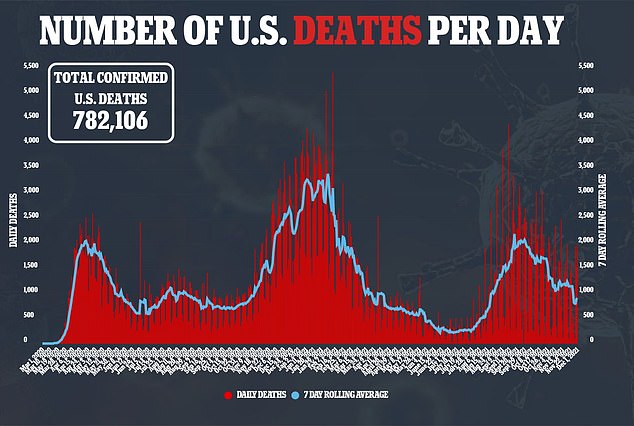 ‘We’re not defenseless against this variant,’ Gov Kathy Hochul said at a news conference on Thursday, encouraging New Yorkers to get vaccinated and wear masks in public places to protect themselves.

‘In addition to vaccination and boosters, we can slow the spread of this variant and all COVID-19 variants by using the tried-and-true prevention methods of wearing masks, staying home when sick, and getting tested when appropriate.’

‘I don’t want anyone to panic over this,’ Hochul said.

She also said that this time the state would not be caught off guard like it was in March 2020, when New York City suffered a massive surge right at the start of the pandemic.

As of Thursday afternoon, three cases of the variant have been sequenced in the U.S., including the Minnesota man.

The first case was found on Wednesday, when a person from San Francisco, California, who had recently traveled to South Africa was discovered to be carrying the variant.

A woman in Colorado who had recently travelled to a southern African nation and later tested positive for Covid was also found to have the variant.

Both of those people were also fully vaccinated. 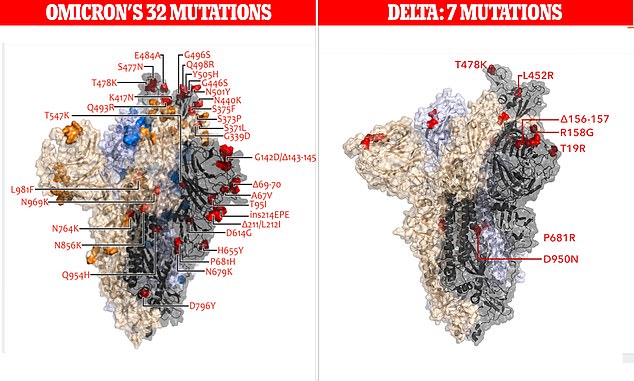 The variant was first detected in South Africa last week, but is believed to have originated in either Botswana or in a European country.

South African health officials are reporting that cases of the variant they have seen so far have been more mild than those of other variants.

It has 50 mutations, including more than 30 on the spike protein that the COVID-19 vaccines target to prevent infection.

For comparison, the Delta variant – which was responsible for a massive surge of cases in the U.S. over summer – only had seven mutations of the spike protein.

The Covid Genomics UK Consortium released imaging on Thursday showing just how drastic the differences between the Delta and Omicron variant are.

Because of these many infections, vaccine experts fear the shots could be rendered ineffective against the new variant.

A South African expert also reports that the variant could bypass natural immunity provided by previous infection, and it re-infecting Covid survivors at a rate three times that of other variants.

Early reports from the nation suggest that infection’s from Omicron are relatively mild when compared to other strains of the virus, though. 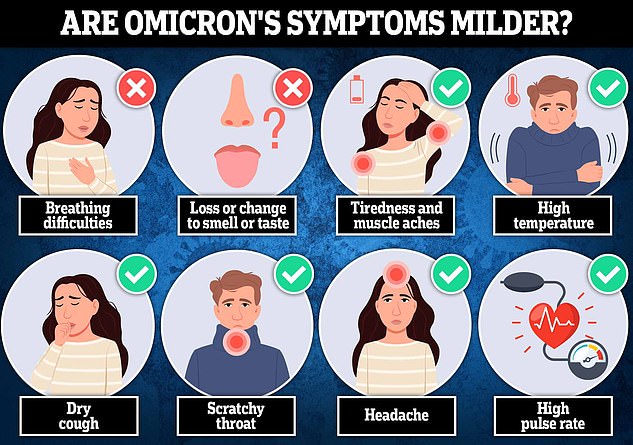 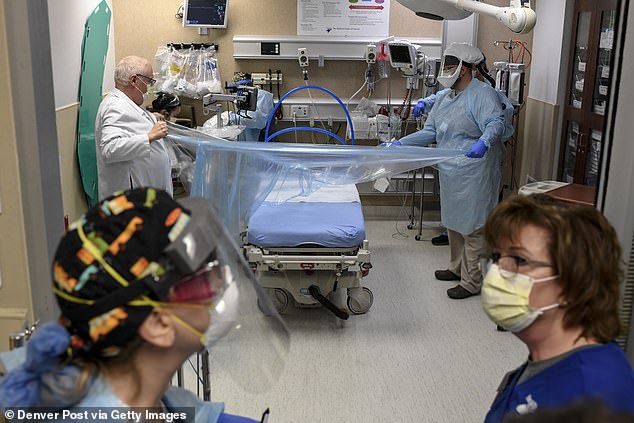 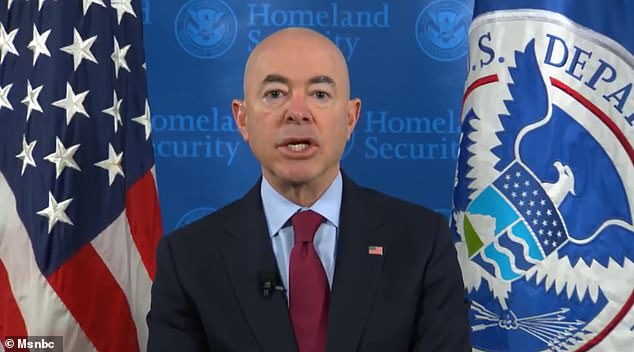 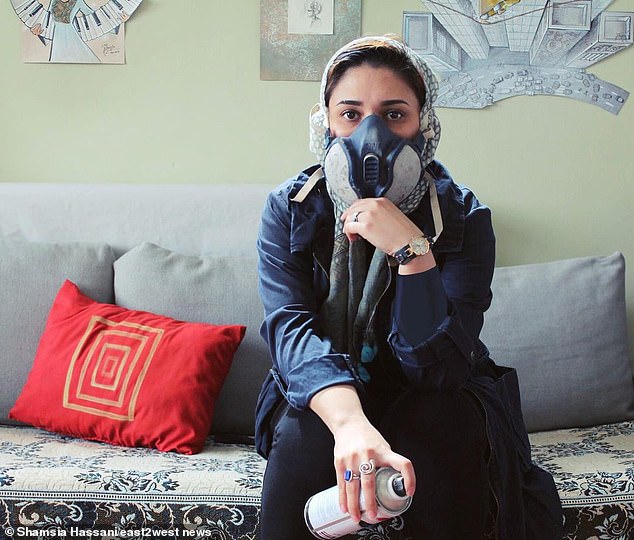 Fears grow for the ‘Afghan Banksy’: Female graffiti artist, 33, has not been in touch with friends