A judge in New Jersey has ruled that a ‘friend with benefits’ has the same rights inside their partner’s home as a boyfriend or girlfriend – to not be searched without a warrant.

Judge Susan D. Wigenton made her ruling on May 13, in the case of a man charged with dealing heroin and weapons charges, who was arrested at the home of his ‘friend with benefits’ – who he had only slept with once before.

Lawyers for Najee Brantley, now 28, had questioned the legality of his July 2018 arrest, when a Gucci fanny pack containing 109 vials of heroin and a semi-automatic handgun were seized.

Paterson police had a warrant for Brantley’s arrest, but not a warrant to search his home.

Prosecutors had argued that because Brantley was at the home of a ‘friend with benefits’, Bahjane Reels, he was not entitled to Fourth Amendment protections – which guard against searches of personal goods inside a person’s home without a warrant.

But Wigenton ruled that Brantley’s lawyers did indeed have grounds to challenge the seizure, if the warrant was not broad enough.

Susan D. Wigenton ruled May 13 that being ‘friends with benefits’ did provide legal protection

Wigenton’s ruling was noticed and tweeted by Orin Kerr, a Berkeley law professor 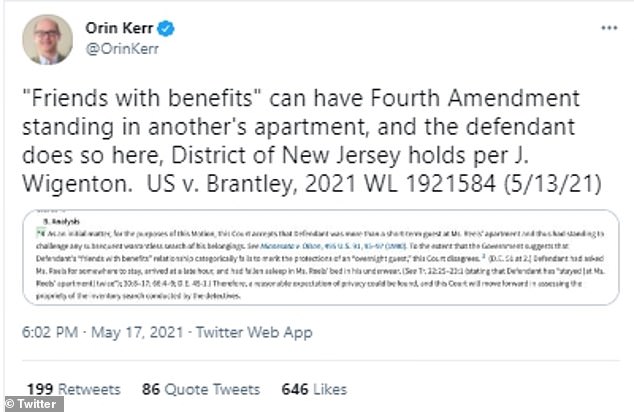 ‘This court accepts that the defendant was more than a short-term guest at Ms Reel’s apartment and thus had standing to challenge any subsequent warrantless search of his belongings,’ Wigenton said.

‘To the extent that the Government suggests that the defendant’s ‘friends with benefits’ relationship categorically fails to merit the protection of an ‘overnight guest’, this court disagrees.’

He was charged with narcotics and firearms offenses, for which he had several outstanding warrants. He had previously been arrested for selling heroin near a school, in 2015, and had felony convictions.

She was arrested on ‘hindering apprehension charges’.

Both Brantley and Reels told investigators that their relationship was casual.

He said it was the second time he had stayed over, and she was not his girlfriend.

She said, according to court transcripts obtained by DailyMail.com: ‘Me and him haven’t been talking and he hit me up saying that, um, he needed somewhere to stay.

‘And me being the person that I am, I told him come on.’

Brantley arrived at around 4-5am on that July 2018 morning, the court heard on April 13.

Reels’ home is in a district of Paterson long troubled by drug dealing and gang violence.

In November 2017, the New Jersey Attorney General’s Office had said that the intersection of Rosa Parks Boulevard and Putnam Street – four blocks from her home – was one of four where the Korner Boyz, or 4KBloods, ran a major heroin operation.

Two girls, aged 12 and 14, died after they were caught in gangland crossfire that summer and fall.

At the time, authorities announced almost 50 arrests and the seizure of about $90,000 in drugs, $20,000 in cash and three guns, NorthJersey.com reported.

When police arrived at Reels’ apartment at about 10am, 10-15 minutes after they received an anonymous tip-off that Brantley was there, she opened the door to the officers and then went into the bedroom.

Brantley was later found hiding under the bed, wearing just his boxer shorts.

Police handcuffed him and asked him if he had clothes to put on.

When he gestured to his black sweatpants and t-shirt in a corner, an officer lifted them up and found the Gucci fanny pack containing the drugs and the gun.

Brantley has been in jail ever since.

His trial was set for April 2020 but was delayed by the pandemic. 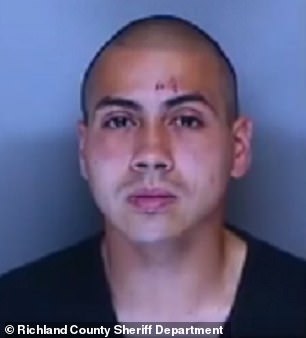 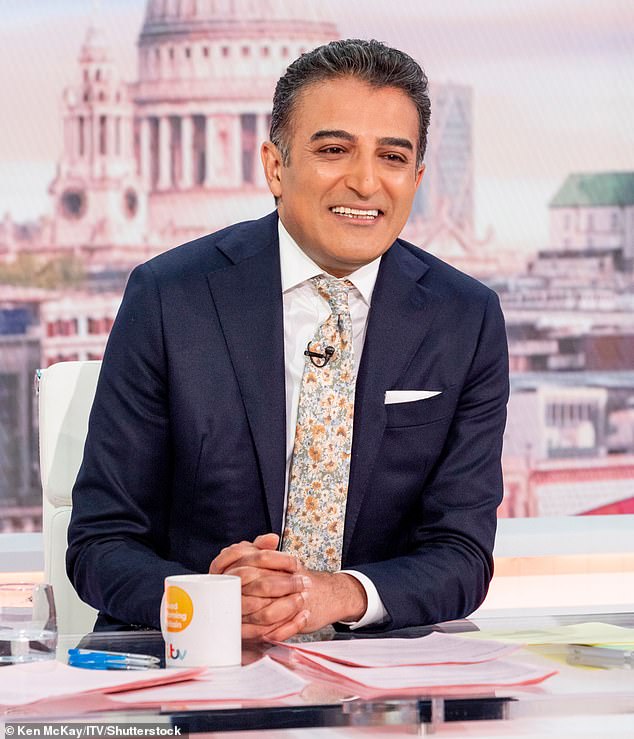 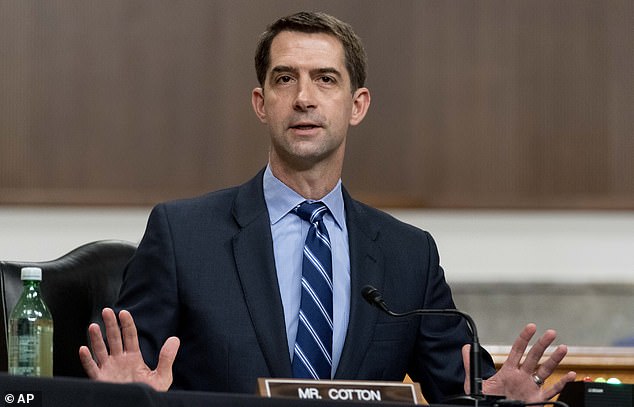