The daughter of a British aid worker killed by the ‘Islamic State Beatles’ says she felt ‘nothing but disgust’ when she came face-to-face with one of the men accused of conspiring to murder her father.

Bethany Haines, 24, whose father David was taken hostage and killed in Syria in 2014, told an ITV News documentary of how she stared down the terror suspect at a courtroom in Virginia, US.

While attending the court hearing of El Shafee Elsheikh, who is due to stand trial in January next year, the young mother recalled how he chillingly stared ‘right into my eyes’.

In the documentary The ISIS ‘Beatles’: Blood On Their Hands, she said: ‘He was masked. And so I couldn’t really tell what his facial expression was.

‘You know, I’ve nothing to be ashamed of. He’s the one who’s got to be intimidated or embarrassed.’

While attending the court hearing of El Shafee Elsheikh, who is due to stand trial in January next year, Bethany Haines (pictured) recalled how he chillingly stared ‘right into my eyes’ 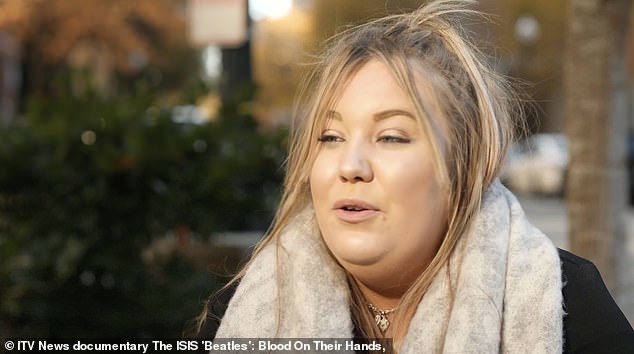 David Haines, James Foley and Kayla Mueller had all travelled to Syria before they were captured by the terror group, known as the Islamic State Beatles because of their British accents (Pictured: David’s daughter Bethany) 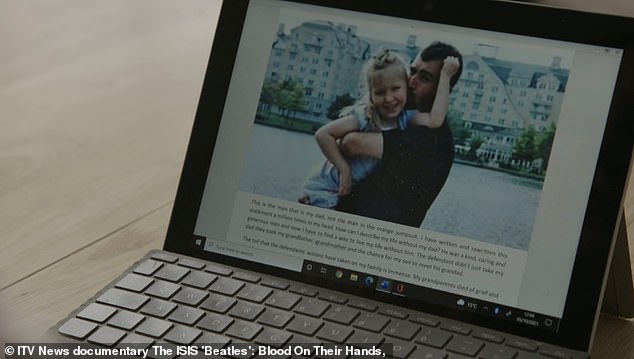 Elsheikh is accused of being involved in the murder of a number of British and American hostages in Syria between 2014 and 2015.

Bethany said the face-to-face meeting with the Elsheikh was about ‘standing up for’ and ‘representing my dad’ and ‘giving him the voice he doesn’t have’.

She added: ‘I actually thought I would be really angry and struggle with keeping a cool head, but I actually felt nothing but disgust.’

The hearings, taking place ahead of a trial penned for January next year, have brought together families of three of those victims.

Reading an impact statement she planned to read out to Elsheikh from her laptop, Bethany says in the documentary that her ‘whole life has been turned upside down’ by her father’s murder, and that she ‘wakes up everyday thinking about him’.

She adds: ‘The prophet Muhammad said the worst person before Allah would the one who killed those who did not fight him.

‘No matter what you say, this was not about religion, you brutally murdered good and innocent people, and now you have to live with that for the rest of your life.

‘The only thing you could do to help the victims would be to give up the locations of the remains of our loved ones.

‘Don’t do it for me, do it for my son, who can finally say goodbye to his grandad.’

Alongside Haines in court were Americans Diane Foley and Marsha Mueller.

They are the relatives of James Foley and Kayla Mueller, who had travelled to Syria with David before they were all captured by the terror group, known as the Islamic State Beatles because of their British accents. 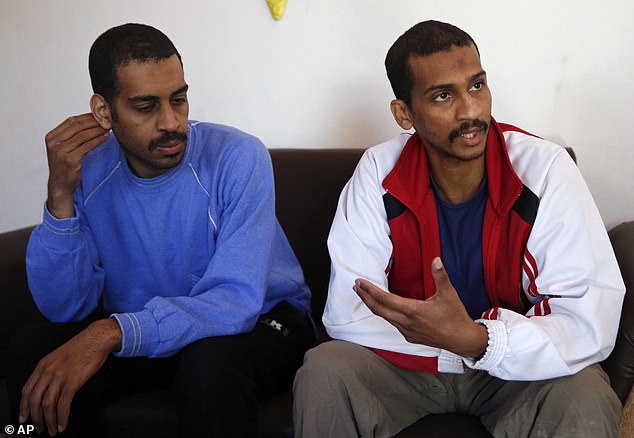 Alexanda Amon Kotey, left, and El Shafee Elsheikh, who were allegedly among four British jihadis who made up a brutal Islamic State cell dubbed ‘The Beatles’. (Pictured during an interview with at a security center in Kobani, Syria)

Despite the families being united by their ordeal for nearly ten years, this week was the first time they had all met in person.

In September, Alexanda Kotey pleaded guilty to multiple charges relating to the kidnapping, torture and murders of four Americans – including James Foley and Kayla Mueller.

As part of his plea deal Kotey has agreed to meet each of the victims families and in return, he will be allowed to return back to the UK after 15 years and serve out the rest of his sentence.

The trial will now only include Elsheikh who still maintains his innocence.

Bethany Haines was just 17 when her father David was killed, since his death she has travelled to Syria to learn of his final days before he was murdered by ISIS. 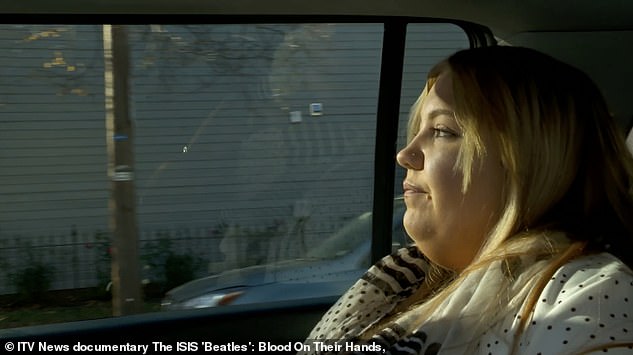 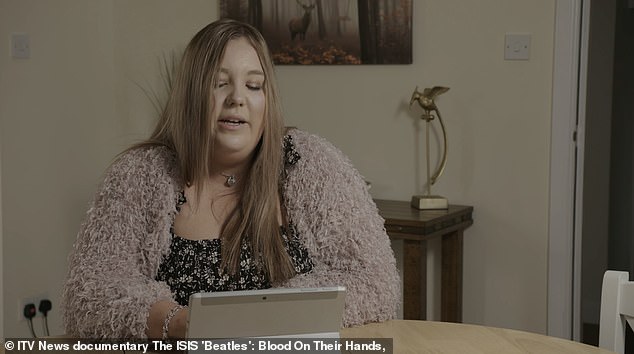 On the way to the hearing, Bethany (pictured) said this moment was about ‘representing her dad’

She had been adamant that she would travel to the US so she can look the man charged with conspiring to murder her father in the eye when he faces trial.

Last week Bethany was able to do just that and look her father’s alleged killer Elsheikh in the eye. After that moment she said that she thought he was ‘scum’.

Speaking about the impact being in court had on her Bethany said; ‘Even hearing my dad’s name in court, I got emotional and had to step out for a moment.’

Bethany Haines said she ‘wouldn’t be intimidated’ by Elsheikh

The ITV News documentary follows the events that brought Bethany into the same courtroom this week, to sit yards from a man from London accused of being an ISIS executioner. 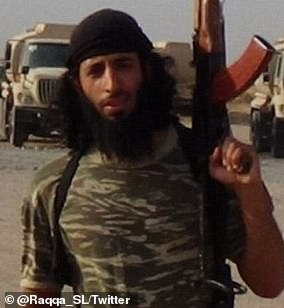 Emwazi was one of the most prominent members of the so-called ISIS Beatles and was regularly seen carrying out executions in their horrific beheading videos.

He took part in the barbaric beheadings of British aid workers David Haines and Alan Henning and US journalists James Foley and Steven Sotloff and US humanitarian worker Peter Kassig.

The terrorist, who was born in Kuwait and grew up in Queen’s Park, West London, was charged with 27 counts of murder and five counts of hostage taking in November 2014.

He was killed in a Hellfire missile drone strike in Syria in 2015. 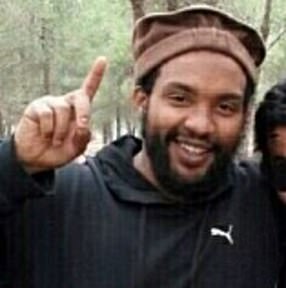 Davis was born Aine Leslie Junior Davis in 1984 to Fay Rodriquez, and is believed to have spent the early years of his childhood in Hammersmith where his mother lived.

He was one of 13 children his father had by four different women.

The former tube driver, who has drug-dealing and firearms convictions to his name, converted to Islam while in prison.

In 2014 his wife, Amal el-Wahabi, was convicted of funding terrorism after she persuaded a friend to try and smuggle £16,000 in cash in her underwear to him.

Davis was captured by Turkish security officials in 2015 and was later found guilty of being a senior member of a terrorist organization and was sentenced to seven and a half years in prison. 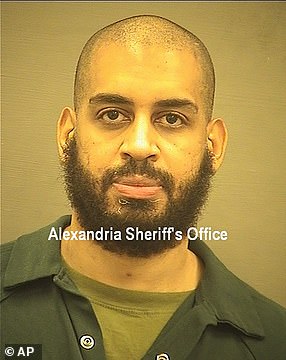 Kotey, 36, was born to a Ghanaian father and a Greek Cypriot mother and grew up in Shepherd’s Bush, London.

Before his radicalization, he is thought to have worked as a drug dealer before converting to Islam in his early 20s.

In 2012, he left for Syria where the US claims he was involved in beheadings and known for administering ‘exceptionally cruel torture methods’, including electronic shocks.

He is also accused of acting as an ISIS recruiter who convinced a number of other British extremists to join the terror group.

Kotey was captured in Syria while trying to escape to Turkey in 2018 and was held in a US military center in Iraq.

The British Government wanted him tried in the US, where officials believe there is a more realistic chance of prosecution than in the UK.

He was extradited last year and was charged with a number of terror offences. 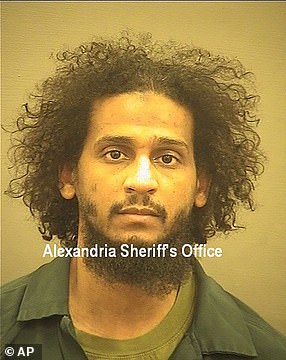 Born in Sudan, Elsheikh, 32, grew up in West London and is the final member of the four British terrorists who fled to join ISIS.

He has been linked to the killings of a number of hostages after heading to Syria to join the extremist group.

He was captured along with Kotey when they tried to flee to Turkey in 2018 and has since been transported to the US where he now faces charges relating to terrorism and beheading Western hostages. 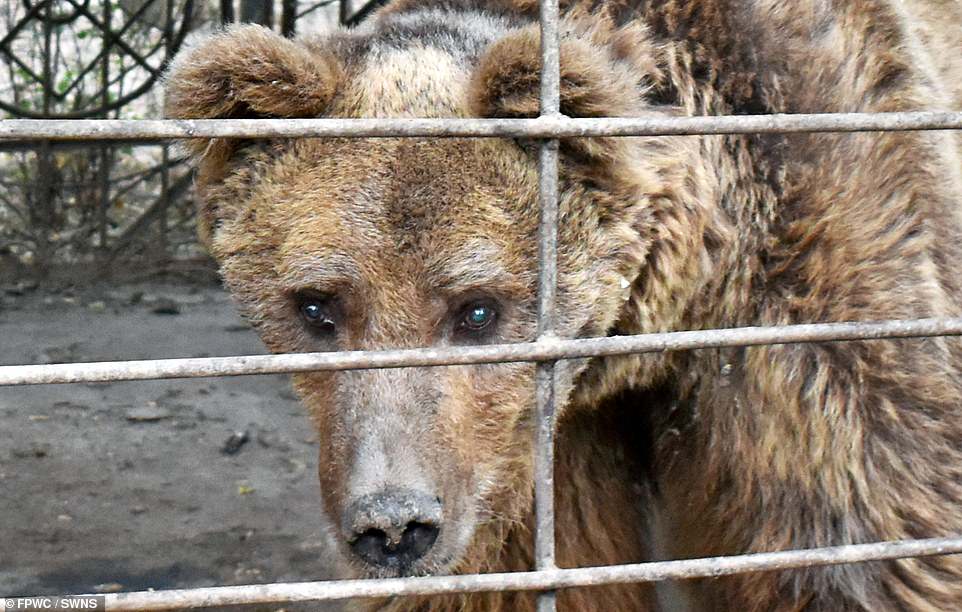 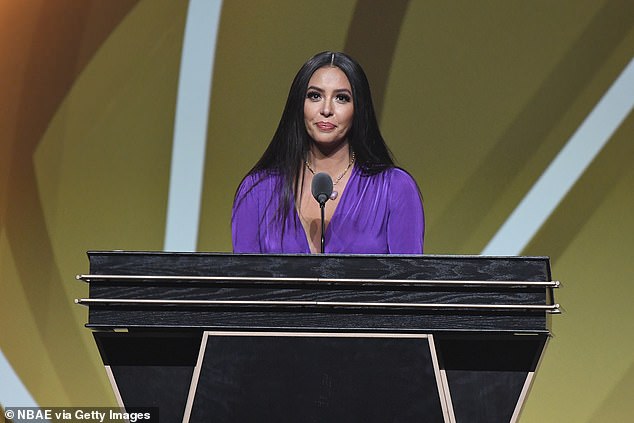 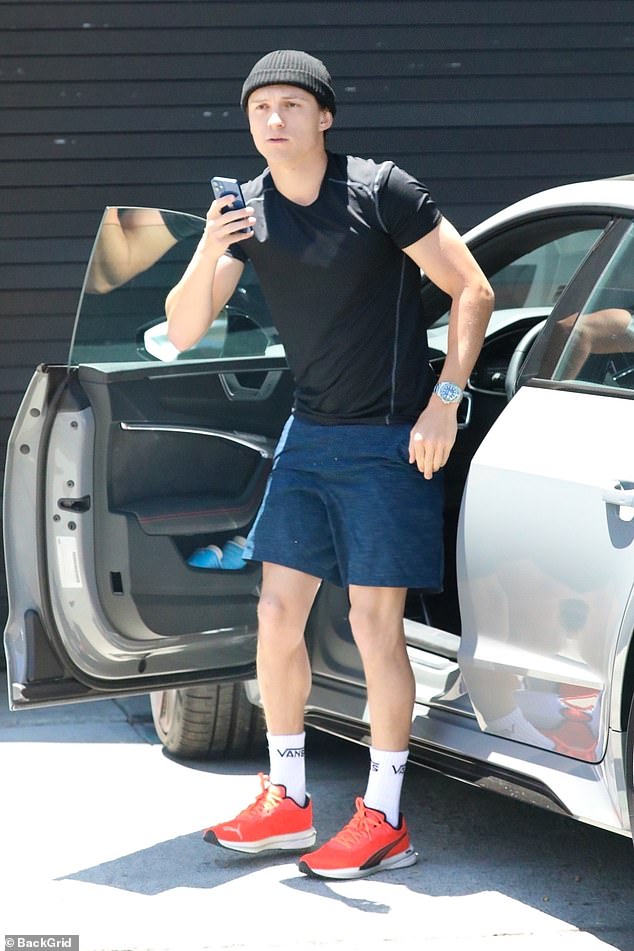 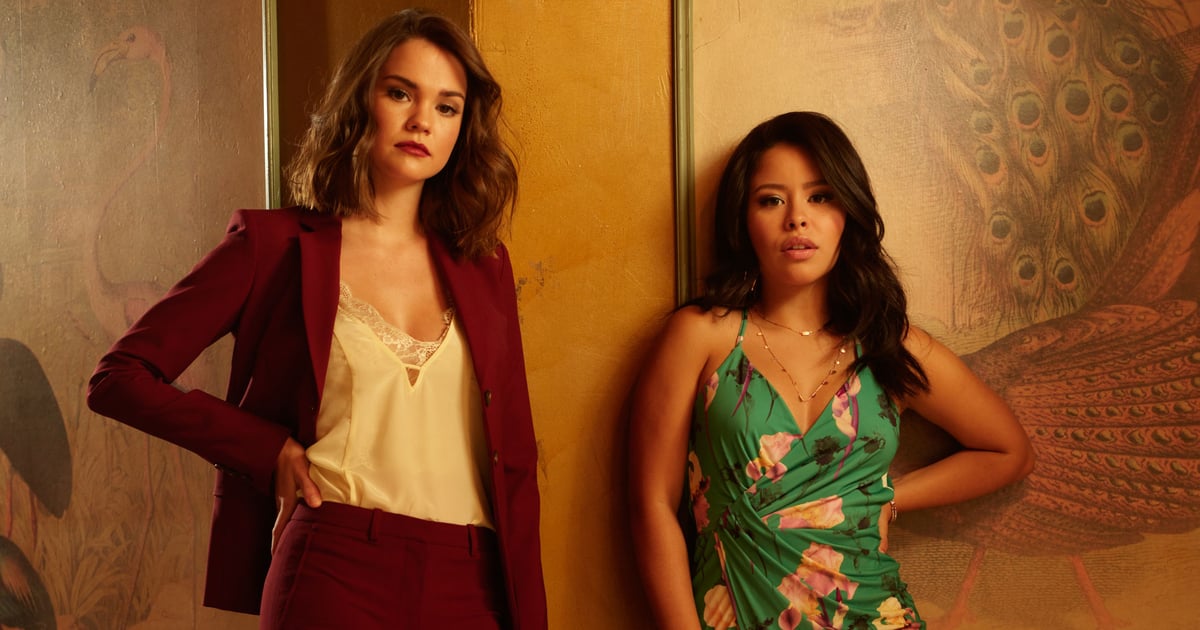