A mentally unstable Maryland man shot dead his brother and sister-in-law because he was convinced his sibling – a pharmacist – was ‘killing people with the Covid-19 vaccine,’ according to court documents revealed Wednesday.

Jeffrey Burnham, 46, of Cumberland, began his murderous spree by first stabbing to death his mother’s childhood friend and stealing her car so he could drive to his brother’s house, cops said.

‘[Burnham] stated to Evelyn that he wanted to confront Brian about the government poisoning people with COVID vaccines and that he repeatedly stated, ‘Brian knows something,'” read charging documents filed in a Howard County court.

Burnham was arrested on Oct. 1 at The Billy Motel & Bar in Davis, West Virginia, after an 18-hour manhunt that ended when he confessed to a firefighter that he ‘had been forced to kill three people,’ the Baltimore Sun reported.

Jeffrey Burnham murdered his pharmacist brother and two others because his brother was ‘killing people with the Covid-19 vaccine,’ court papers state

Two days before, Burnham, who lived with his mother Evelyn and was her caretaker, broke into Rebecca Reynolds’s home and stabbed her to death, cops said.

Reynolds, 83, lived across the street and had a Lincoln that Burnham stole and drove to his brother’s residence in Ellicott City, police said.

Once there, he broke into his brother Brian Robinette’s home and shot to death the 58-year-old pharmacist and his wife, Kelly Sue Robinette, 57, according to police.

Evelyn called Cumberland police twice the week before the killings because she was worried about her son’s ‘mental stability,’ the paper reported.

She told police that Burnham kept claiming that the FBI was after them. 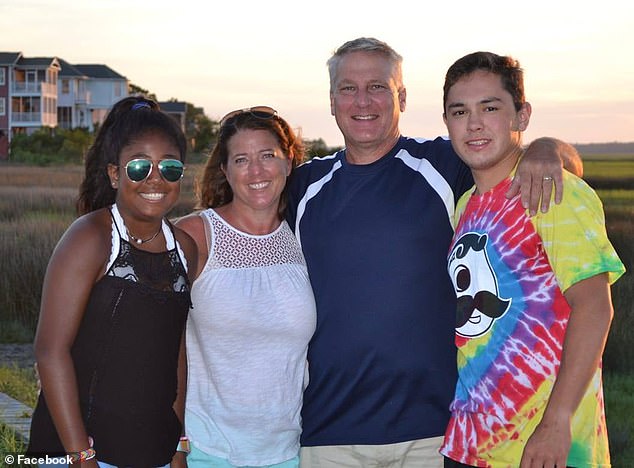 Burnham, of Cumberland, 46, allegedly shot dead his brother and sister-in-law, Brian Robinette (second from right), 58, and his wife Kelly Sue (second from left), 57. The couple is pictured above with their children Jenna (left) and Griffin 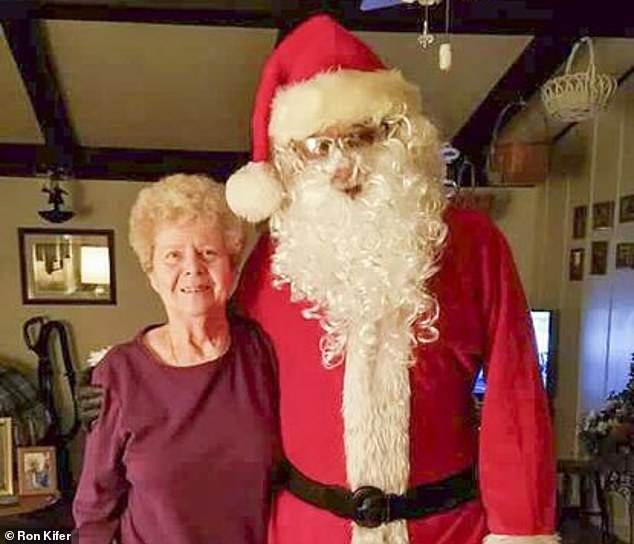 Burnham also stabbed to death Rebecca Reynolds (left), 83, so he could steal her car and drive it to his brother’s home, police said. She is pictured above with her neighbor Ron Kifer, 69, who found her body in her home after he noticed her car was missing

The day Reynolds was killed, Ron Kifer, 69, her neighbor and close friend, told the Baltimore Sun that he saw the gates to her house open and her car missing from the driveway. Her backdoor was unlocked, so he went in to check on her and found her on the couch in a nightgown and covered by a blanket.

Kifer thought she had a heart attack, so he called 911. But when police arrived and took off the blanket, they revealed a deep cut along her neck. Court documents state that there were also signs of a struggle and Reynolds was found beside a broken vase, cordless phone and cane strewn on the floor.

‘She didn’t deserve this,’ Kifer told the Baltimore Sun.

The Robinettes were shot multiple times with a .40-caliber handgun and police found multiple .40-caliber shell casings throughout their home, cops said.

Police also found an empty box for a .40-caliber Smith and Wesson handgun in Burnham’s residence, the documents reveal.

Reynolds’ vehicle was seen parked less than half a mile from the home, while the Robinettes’ Corvette was missing. 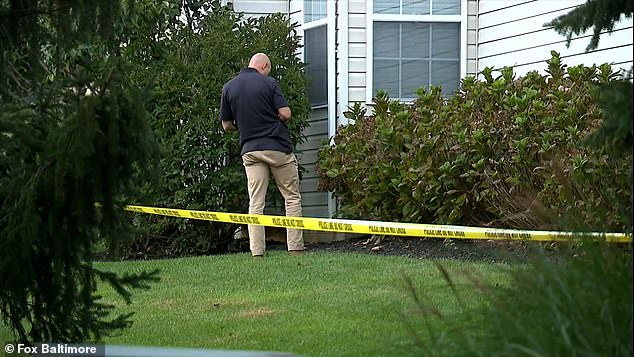 Reynolds, 83, a friend of Evelyn’s since childhood, lived across the street and had a Lincoln that Burnham stole and drove to Ellicott City overnight. 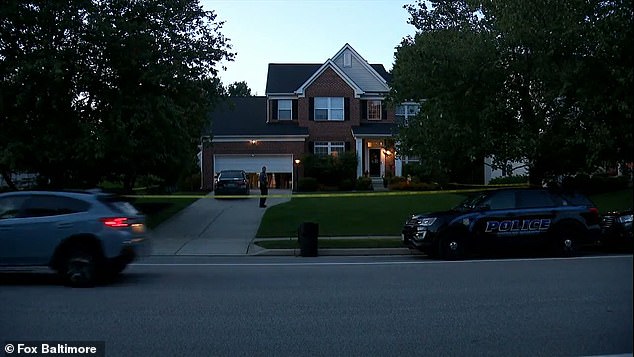 Once there, he broke into his brother Brian Robinette’s home and shot to death the 58-year-old pharmacist and his wife Kelly Sue Robinette, 57

Police found Brian Robinette’s cell phone off an exit ramp down the road and an E-ZPass connected to the Corvette revealed that the car entered the toll plaza at the Baltimore Harbor Tunnel at about 8.30am on Sept. 30, the charging documents said.

Later that day, Burnham stopped at an unnamed person’s home, where he asked for gas and said ‘he would see him on TV,’ court records show.

After learning of the manhunt for Burnham the ‘tipster’ called Maryland State Police to tell them that he stopped there and kept talking about his brother giving people the Covid-19 shot, which he said was ‘killing people.’

After his arrest in West Virginia, Burnham was extradited back to Maryland and is being held without bail at the Allegany County jail. He faces first- and second-degree murder charges.

His next court date is November 5.

Asked for comment from the Baltimore Sun, Evelyn said through tears, ‘I’m sorry. I’m so, so sorry. I lost two boys and a friend and a daughter-in-law. I just hope they find out what went wrong in his head.’

Burnham’s neighbors Gary Mustin, 79, and Vesta DeMoss , 74, told the Baltimore Sun that the community is in shock, but described Burnham as deteriorating from ‘one of the nicest kids’ to a ‘loner’ who stopped acknowledging anybody around town.

Shortly before the murders, they recalled seeing him scream and curse at a group of children playing outside his home.

Meanwhile, friends of the Robinettes set up a GoFundMe to help financially assist their two children, Jenna and Griffin.

The page, which has since raised $92,299 of its $100,000 goal, reads, ‘Kelly’s infectious laugh and Brian’s dry sense of humor brightened our lives. They raised two amazing children in Howard county, and left their mark on our schools, teachers, fellow parents and now a new generation of young adults.’

‘Kelly and Brian’s friends and family have set up this GoFundMe to give their children the funds and resources they need as they transition into young adulthood. The funds will help them manage costs associated with the unexpected loss of their parents. Please join us in honoring Kelly and Brian’s legacy and supporting their family.’ 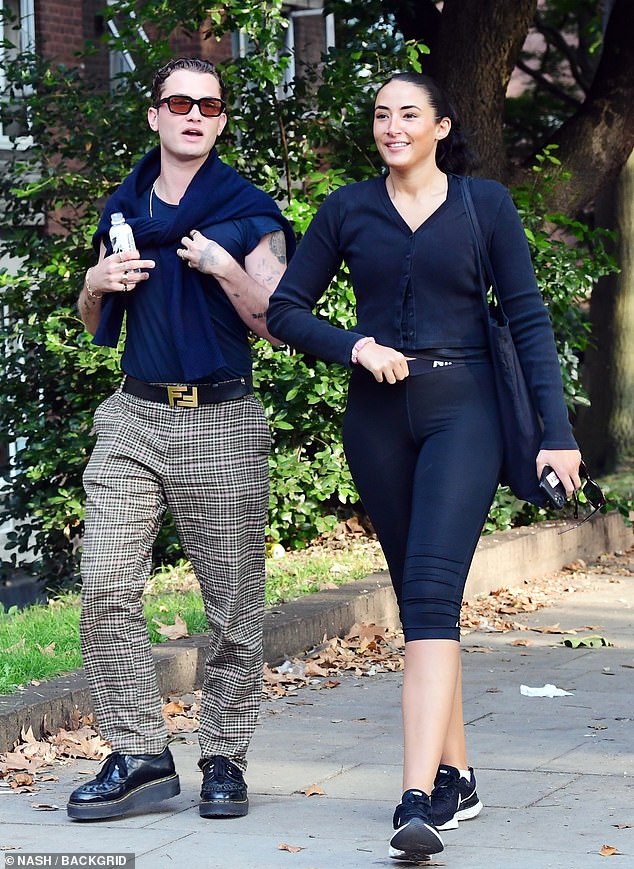 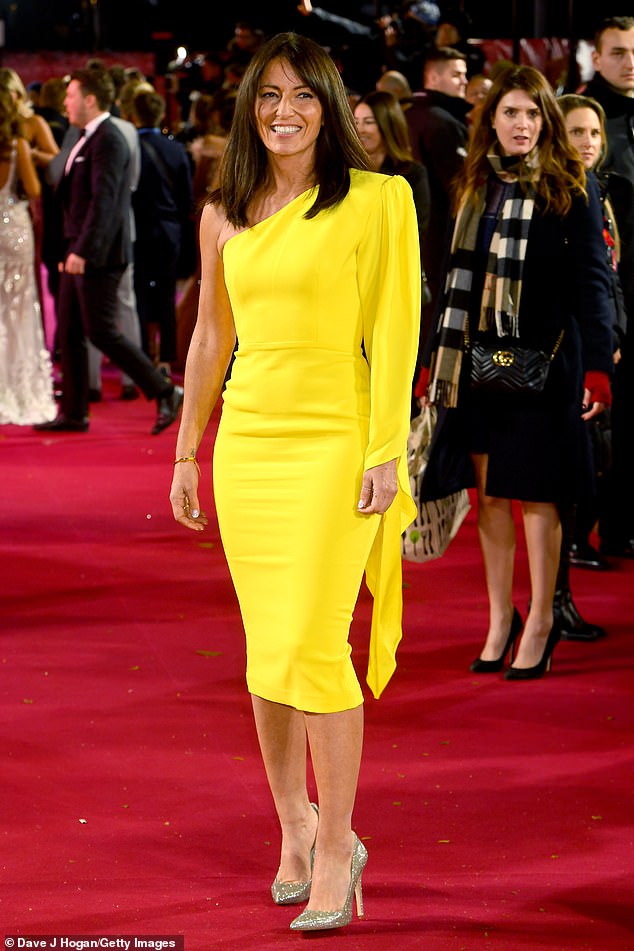 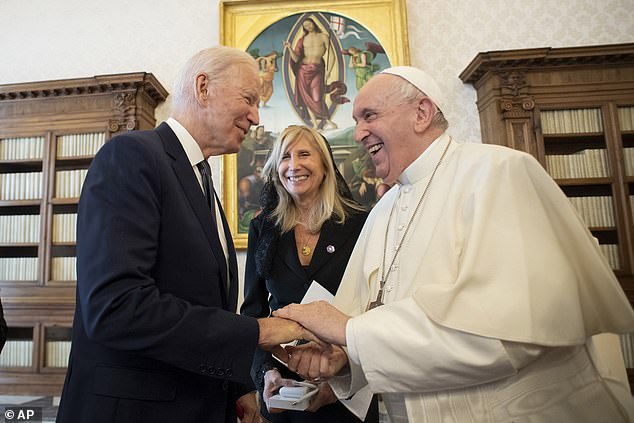 Is Diddy Trying to Send Ex Jennifer Lopez a Message With This Throwback Photo?

May 27, 2021
Check Also
Close
Recent Stories
Featured Posts
Sweden’s gambling industry is on the rebound with online sales leading the way
15 mins ago