‘You are so adored!’ Martine McCutcheon showers Tom Parker with affection and shares gushing tribute after his Inside My Head charity gig


He performed with his band The Wanted for the first time in seven years for his In My head charity concert at the Royal Albert Hall on Monday.

And on Tuesday, Martine McCutcheon, 45, showered Tom Parker, 33, with affection and shared a gushing tribute as she reflected on the show, which he organised following an inoperable stage 4 glioblastoma (brain tumour) diagnosis in October.

The actress took to Instagram where she shared a heartfelt post showing herself kissing and hugging the pop star, telling him: ‘You are so adored,’ within a lengthy caption.

You are so adored! On Tuesday, Martine McCutcheon, 45, showered Tom Parker, 33, with affection and shared a gushing tribute as she reflected on his In My head charity concert

Martine wrote: ‘About Last Night… WOW. I’ve seen many concerts in my lifetime but last nights performance from @thewantedmusic at the @royalalberthall affected me like NOTHING else I’ve ever seen.

‘The Night was for the Inside My Head charity set up by Tom after he was diagnosed with a brain tumour. My husband @jackmcmanus1 had written some songs with the band and we adore them as friends too.

‘The emotion in the room was palpable… I’ve never seen so many people laughing, crying, showing kindness, strength and dancing their hearts out in one place before.

‘I walked away feeling blown away and inspired by the guts, determination, friendship and undeniable talent the boys still have oozing from their every pore. Last nights show will stay with me forever. 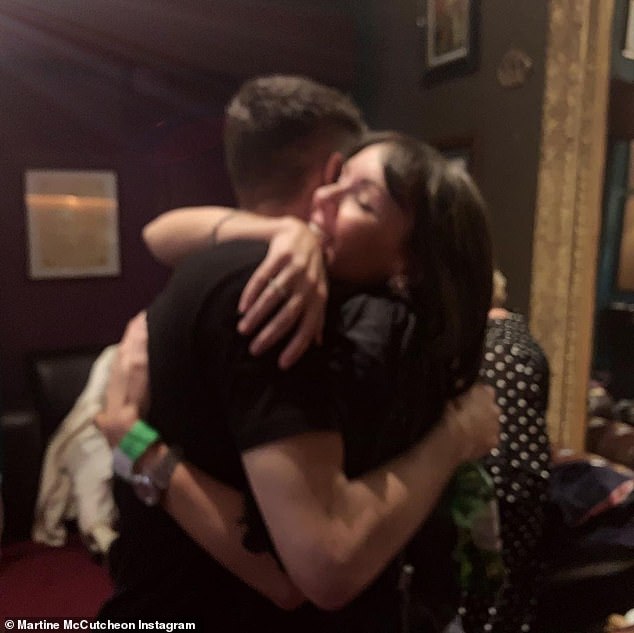 Loved: The actress took to Instagram where she shared a heartfelt post showing herself kissing and hugging the pop star 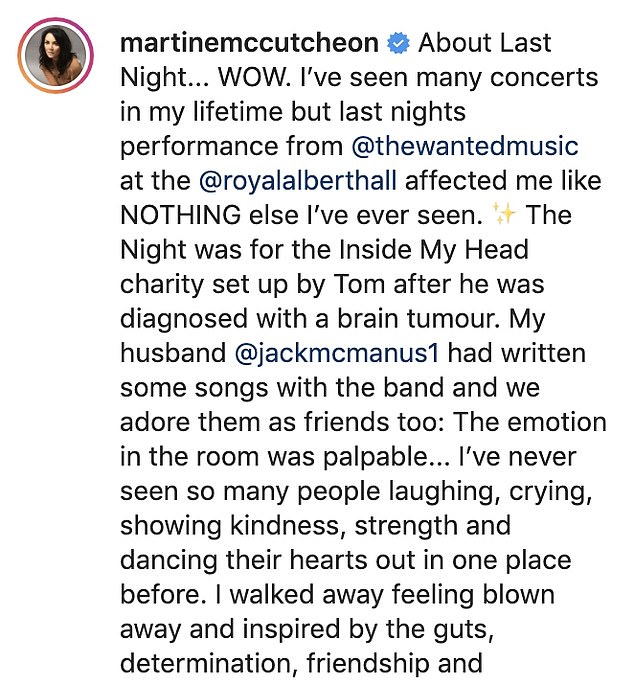 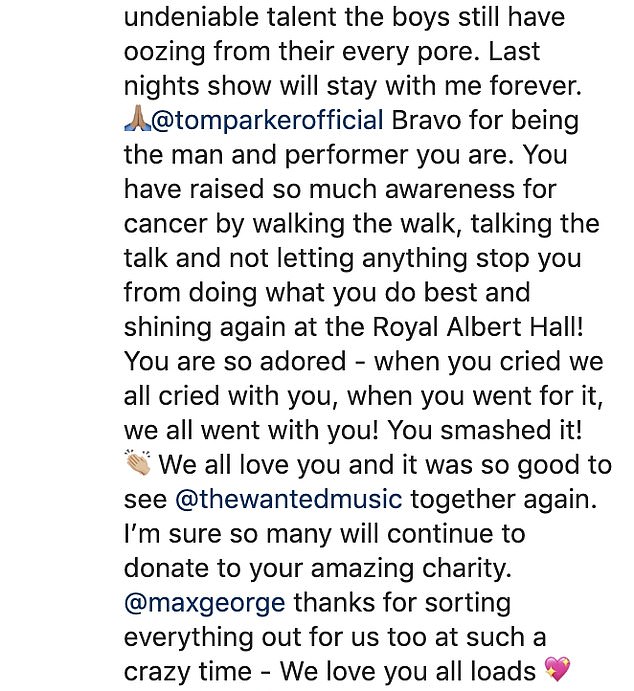 Overwhelmed: Martine told Tom: ‘You are so adored,’ within a lengthy caption

‘@tomparkerofficial Bravo for being the man and performer you are. You have raised so much awareness for cancer by walking the walk, talking the talk and not letting anything stop you from doing what you do best and shining again at the Royal Albert Hall!

‘You are so adored – when you cried we all cried with you, when you went for it, we all went with you! You smashed it! We all love you and it was so good to see @thewantedmusic together again.

‘I’m sure so many will continue to donate to your amazing charity. @maxgeorge thanks for sorting everything out for us too at such a crazy time – We love you all loads.’ 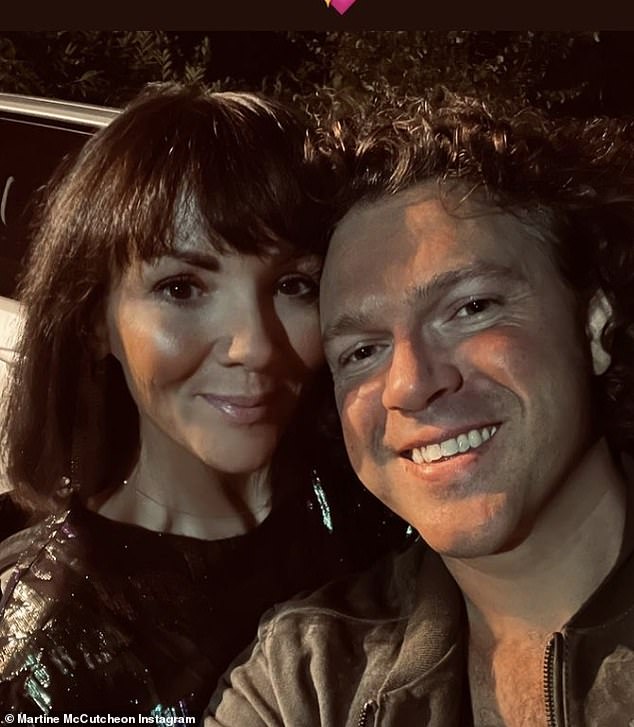 Close friends: Martine shared that her husband Jack McManus had written some songs with The Wanted and that they were also friends with the band 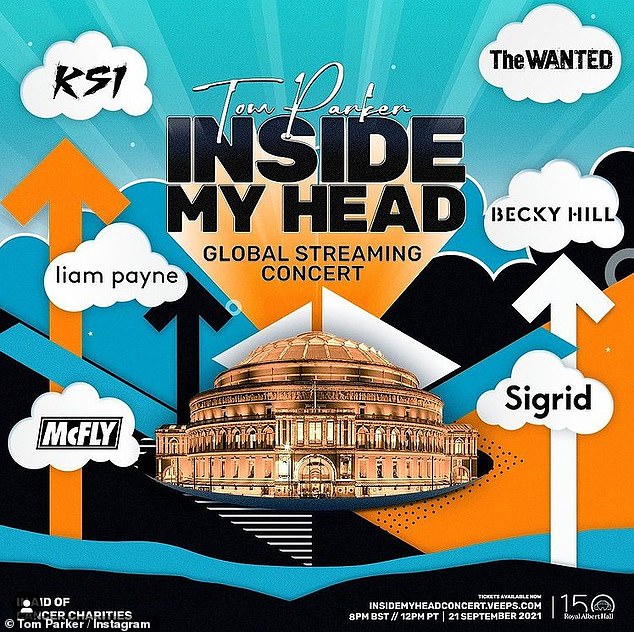 Exciting: Hosted by Roman Kemp & Sonny Jay from Capital FM’s breakfast show, all proceeds from the Royal Albert Hall event will be shared between cancer charities

Tom got emotional on stage as his bandmates wrapped him in a group hug during the show and bandmate Max George gave him a kiss on the cheek.

Tom spoke of his Covid fears following his sell out reunion gig and admitted he was ‘absolutely overwhelmed’ at the response in a video at 1:50 am following the gig and was ‘looking forward to watching the livestream’.

He also told of his sadness at not being able to go out and greet his fans at the gigs due to his health fears.

As a crowd gathered outside the venue to chant ‘We Love Tom’ in the hope of meeting him he said: ‘Wow, what a night, thank you all from the bottom of my heart sorry I couldn’t come out and see you all. Covid Covid but thank you all for the support. It means so much xx’. 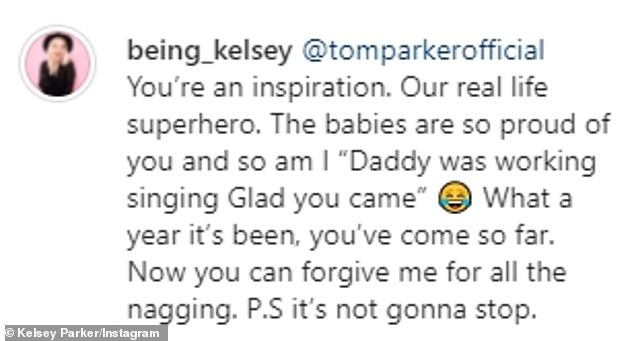 Partner: Tom’s wife Kelsey took to Instagram and branded her husband as an ‘inspiration’ and said she and their children Aurelia, two, and Bodhi, 11 months, are so proud of him

Tom’s wife Kelsey took to Instagram on Tuesday and hailed her husband as an ‘inspiration’ and said she and their children Aurelia, two, and Bodhi, 11 months, are so proud of him.

She wrote: ‘@tomparkerofficial You’re an inspiration. Our real life superhero. The babies are so proud of you and so am I “Daddy was working singing Glad you came”.

‘What a year it’s been, you’ve come so far. Now you can forgive me for all the nagging. P.S it’s not gonna stop.’

Glioblastoma is an aggressive type of cancer that can occur in the brain or spinal cord.

It forms from cells called astrocytes that support nerve cells.

Glioblastoma can occur at any age, but tends to occur more often in older adults.

It can cause worsening headaches, nausea, vomiting and seizures.

Glioblastoma, also known as glioblastoma multiforme, can be very difficult to treat and a cure is often not possible.

Treatments may slow progression of the cancer and reduce signs and symptoms. 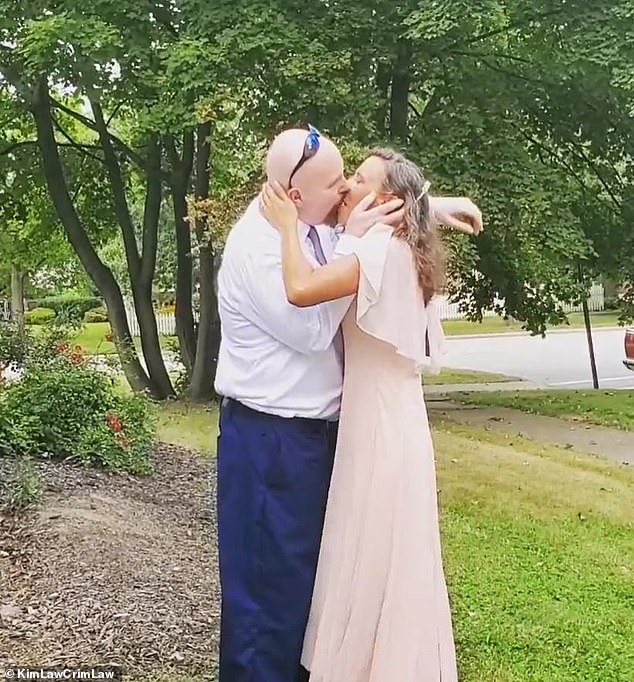 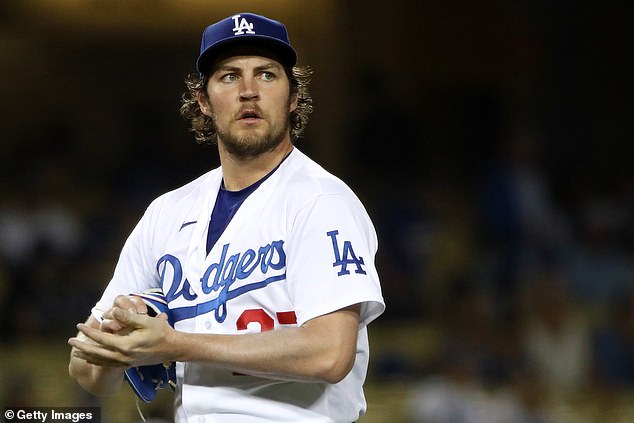