They are known to be extremely social creatures that thrive in the freezing waters of the Artic.

So the discovery of a lone beluga whale off the coast of Seattle — almost 1,500 miles from its nearest population in Alaska — has left scientists baffled.

The wayward creature’s ‘very rare’ appearance is the first documented sighting of a beluga whale in the inlet of Puget Sound in more than 80 years.

The closest beluga whale population is in Cook Inlet, Alaska, about 1,450 miles away.

Mystery: The discovery of a lone beluga whale off the coast of Seattle — almost 1,500 miles from its nearest population in Alaska — has left scientists baffled (stock image) 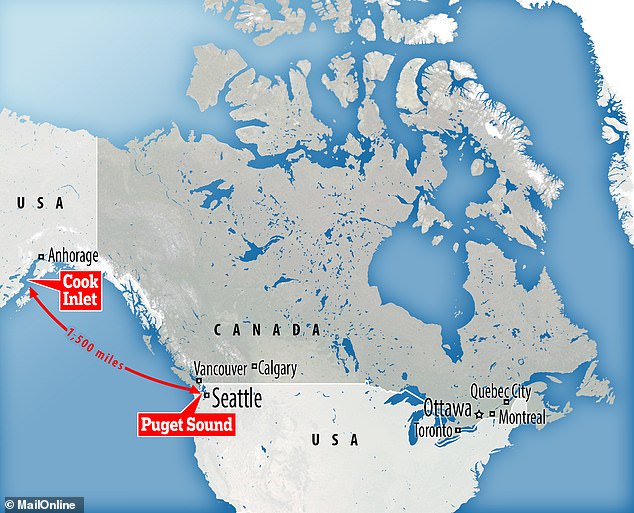 The closest beluga population is in Cook Inlet, Alaska, about 1,450 miles away from Seattle

Belugas, also known as white whales, are known for having rounded foreheads and no dorsal fin.

The marine mammals feed feed on fish, crustaceans, and worms.

Ranging from 13ft to 20ft in length, the whales are common in the Arctic Ocean’s coastal waters.

But they migrate southwards in large herds when the sea freezes over.

The whales, whose scientific name is Delphinapterus leucas, have an average life span in the wild is 35 to 50 yaers, and weigh around a tonne.

Experts are stumped as to how and why it ended up near Seattle but the fact it has been swimming close to three different shipyards has thrown up one theory.

‘I don’t understand the attraction of a shipyard to a beluga,’ said Howard Garrett, co-founder of Orca Network, a non-profit organisation that raises awareness about whales in Puget Sound.

He told Live Science: ‘I don’t know if that’s a clue, if that means it had been held captive at a shipyard somewhere at a busy port, but we have no documents, no idea of where that would be, certainly in North America.’

Two years ago another beluga whale hit the headlines when it appeared off Norway’s coast sporting a Russian harness and camera attachment, prompting speculation it may have been acting as a spy for Moscow.

It was spotted by fishermen in April 2019 and again puzzled experts because belugas are so rarely seen that far south of the high Arctic.

An investigation was launched by Norway’s domestic intelligence agency, which deemed that the whale was ‘likely to have been part of a Russian research programme’.

There is no suggestion the Seattle beluga is anything to do with the Kremlin, however. 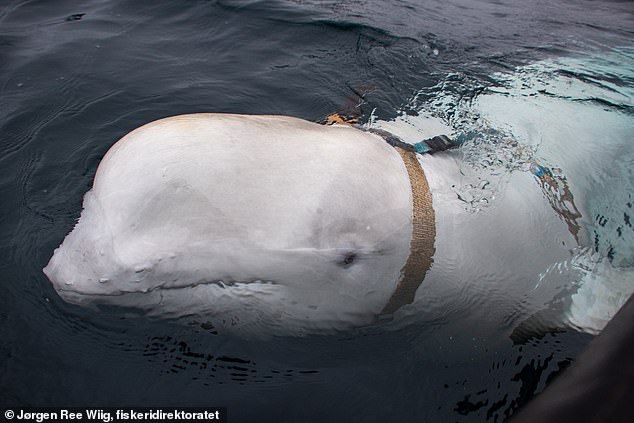 Secret agent? Two years ago another beluga whale hit the headlines when it appeared off Norway’s coast sporting a Russian harness and camera attachment (pictured), prompting speculation it may have been acting as a spy for Moscow

Garrett’s other thought is that it may just be a keen globetrotter.

‘Until we have some indication, my default theory is that this whale just decided to go out walking, go explore,’ he said.

‘It wanted to travel. It’s highly unusual, but every now and then it happens with different [beluga] populations. So, it’s not totally unprecedented, but definitely very rare.’

The last recorded sighting of a beluga whale in Puget Sound was in 1940, he added.

There was also a report of a beluga in the sound in 2010, but only one person said they had seen it and they weren’t able to get photographic evidence.

One of the first reported sightings of this new beluga was on October 3, when it was seen swimming in Commencement Bay near Tacoma, about 30 miles (50 km) south of Seattle. 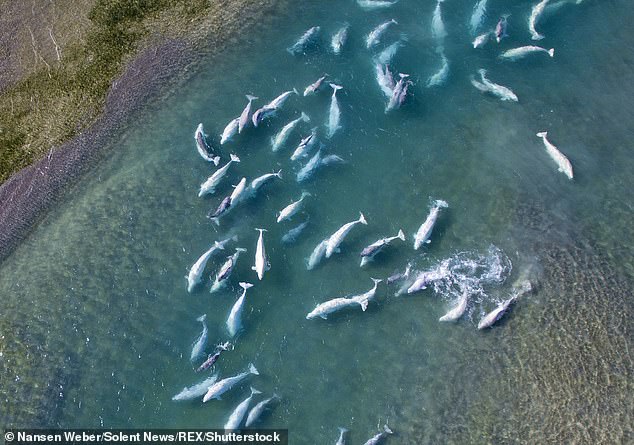 Beluga whales are extremely sociable and live, hunt and migrate together in pods, ranging from a few individuals to hundreds of whales (stock image)

Experts believe it is in good health and say the fact that in Puget Sound there are plenty of squid, crabs and small fish, all part of a beluga’s staple diet, is a good sign.

The area is also home to other whales, including humpback and minke species, so the beluga is not alone in that sense.

Belugas are white because it helps them to stay camouflaged amongst the sea and ice of the Arctic, as is the case with other animals native to the polar region.

They are extremely sociable and live, hunt and migrate together in pods, ranging from a few individuals to hundreds of whales. Their bulbous forehead, called a ‘melon’, is capable of changing shape and is used for communication and echolocation.

Scientists are now hoping to get more images of the beluga in Seattle to compare it with other known whales nearby in an effort to identify where it came from.

The local branch of the National Oceanic and Atmospheric Administration is leading this analysis, while other whale and animal groups are also monitoring the beluga’s movements.

In the UK, a beluga whale was seen living in the River Thames for several months between September and December 2018.

Nicknamed, ‘Benny the beluga’, he drew crowds of people to the river bank hoping to catch a glimpse of him, and regularly fed along the Kent stretch of the Thames.

WHY DO SOME SPECIES GO THROUGH MENOPAUSE?

Few animals are known to experience menopause, with most species reproducing until they die.

Typically, menopause is triggered when animals undergo hormonal changes that cause them to stop being able to reproduce.

Researchers suggest this biological ‘off-switch’ is useful in species who spend most of their lives looking after their descendants.

In killer whales, for example, both male and female offspring stay with their mothers for life, as well as grandchildren.

The mother is responsible for finding food, and if she kept having offspring her direct descendants would have to compete for resources.

Terrifying video shows unwitting girl, 16, being STRANGLED from behind by a homeless woman 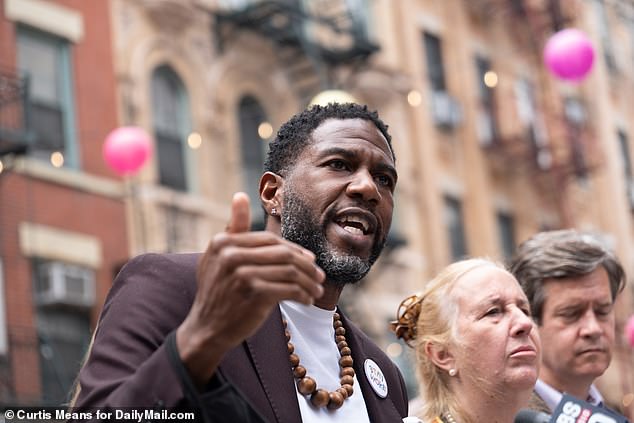 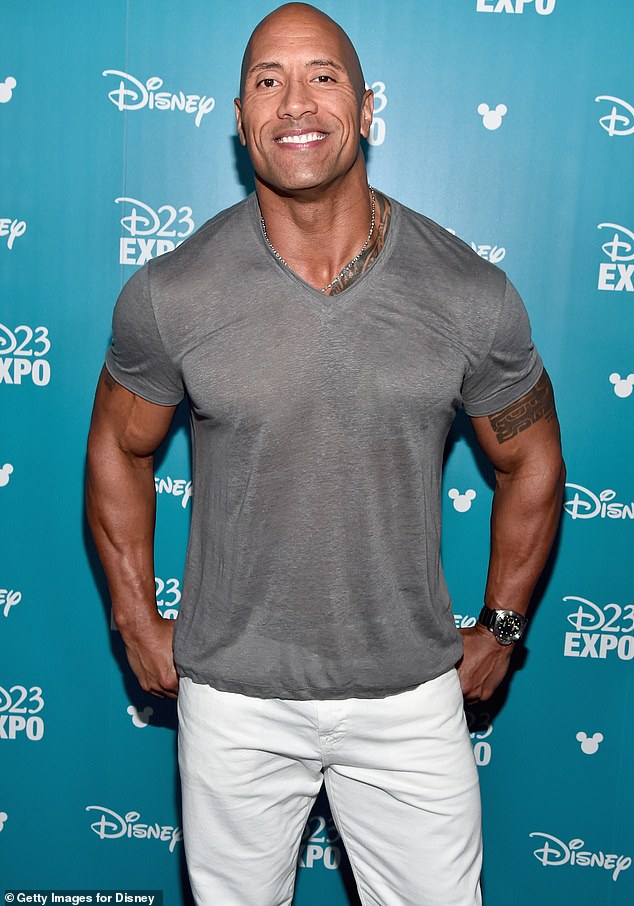 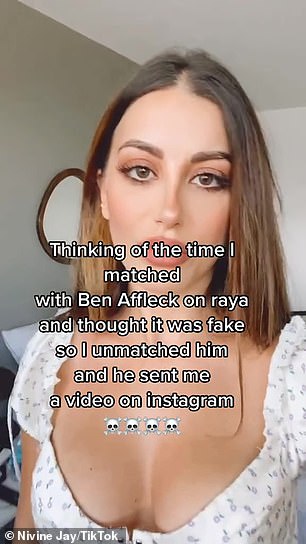 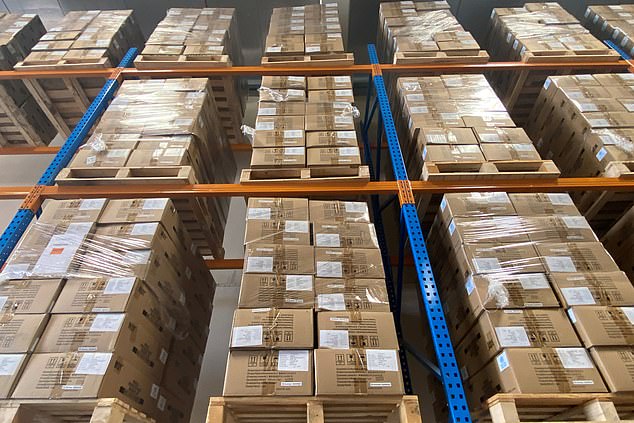 Dubai’s Emirates airline will ship aid to India for free