President Joe Biden and First Lady Jill Biden participated in their first National Christmas Tree lighting ceremony while in office Thursday night – that was far more star-studded than those of the Trump era.

The National Christmas Tree sits in President’s Park in the Ellipse to the south of the White House, and Biden marked the 99th year for the lighting ceremony.

Emcee, rapper and actor LL Cool J, had to announce the president and first lady’s arrival twice – as the tree lighting is a pre-taped event to be aired on television later, so there are generally some kinks with cues. 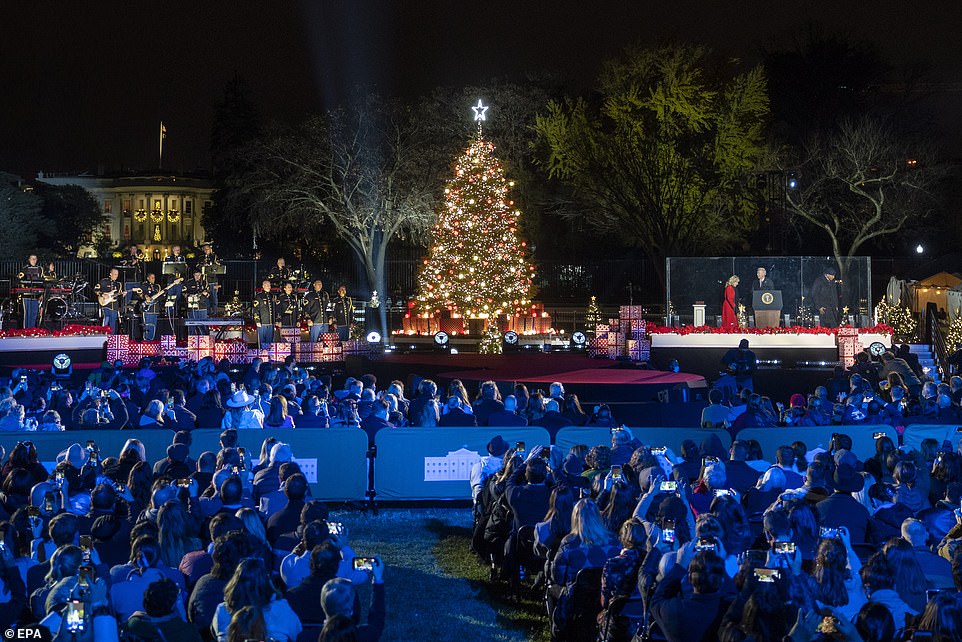 President Joe Biden and First Lady Joe Biden (right) are seen lighting up the National Christmas Tree at an event Thursday night, which will later be televised. The White House can be seen in the background 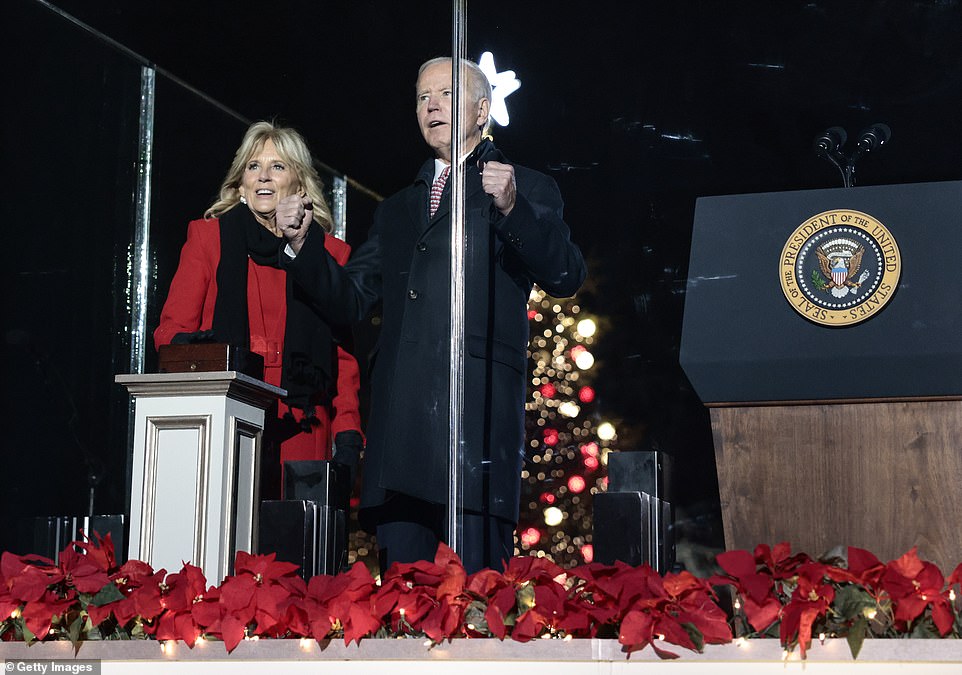 President Joe Biden (right) and First Lady Jill Biden (left) appeared behind glass at the National Christmas Tree, which is a pre-taped to be aired on television at a later date 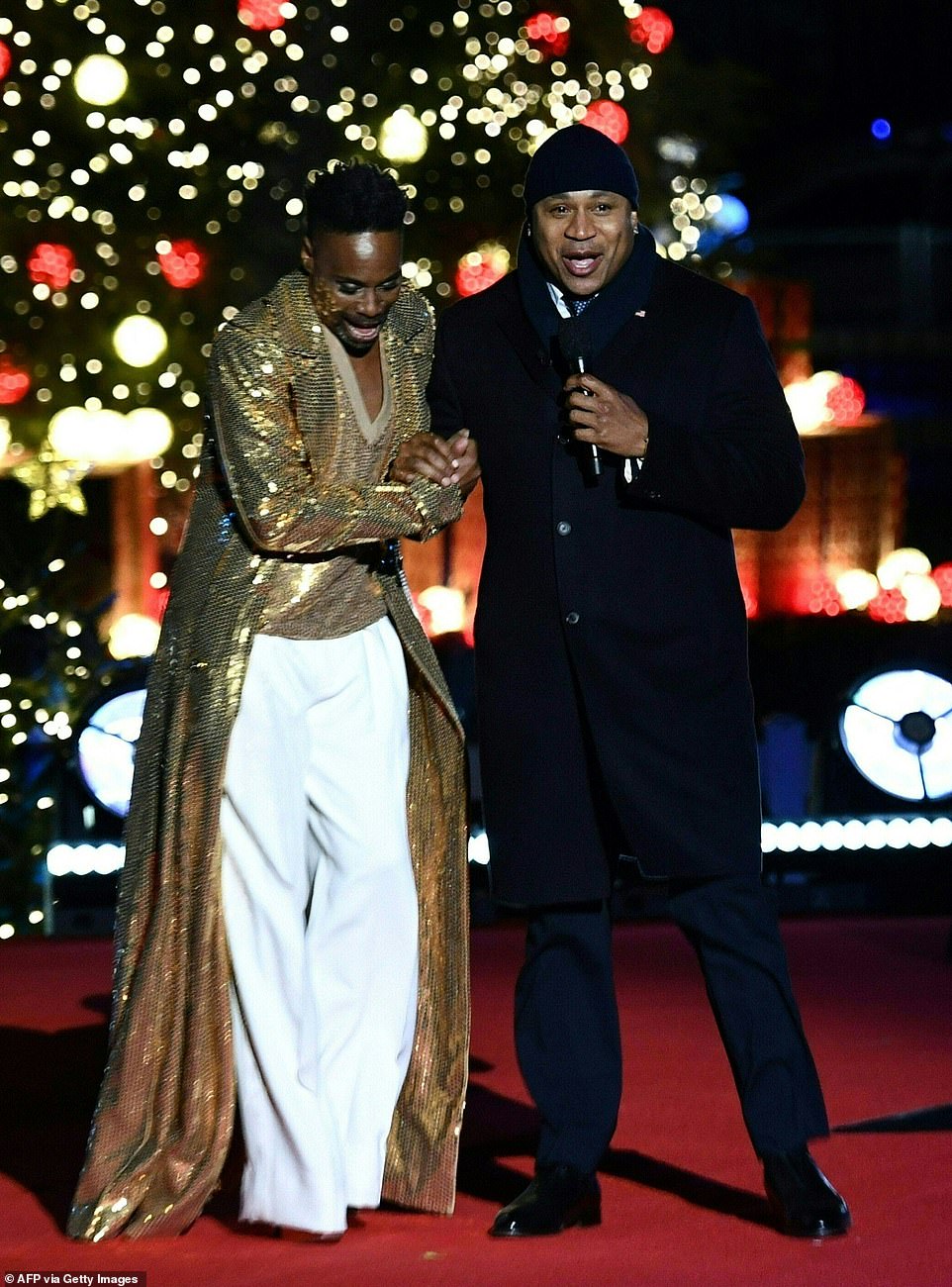 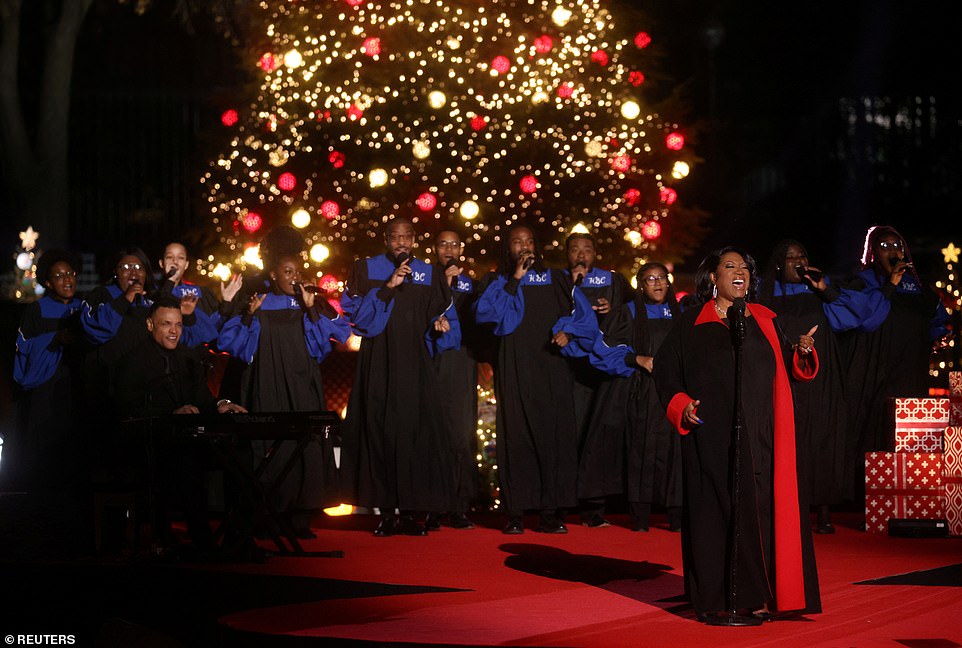 When the president got onstage, he pointed to the podium with the presidential seal and asked, ‘do I speak from here?’

‘Is everybody having a good time so far? Let’s kick off the evening by lighting up the star of the show, the National Christmas Tree. Everybody ready? Let’s count down,’ Biden said.

Biden counted down from five, as the 27-foot white fir from Pennsylvania, planted several weeks before, lit up in red and white behind him.

Dr. Biden did the honors and pushed the button to turn the tree’s lights on. 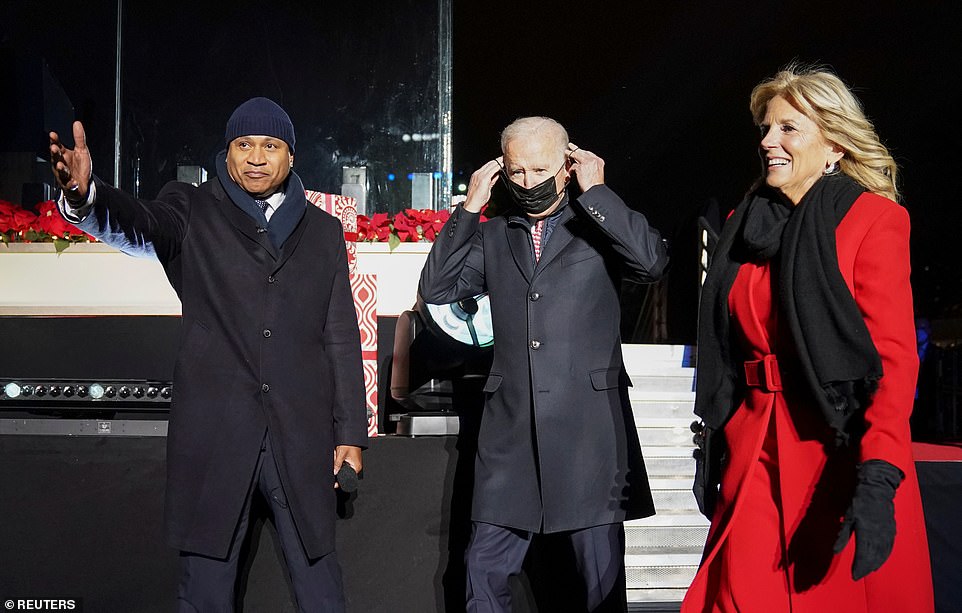 President Joe Biden (center) tried to compliment LL Cool J’s (left) physique: ‘He looks like he can still play and I’m not talking about instruments, I’m talking about football or something’ 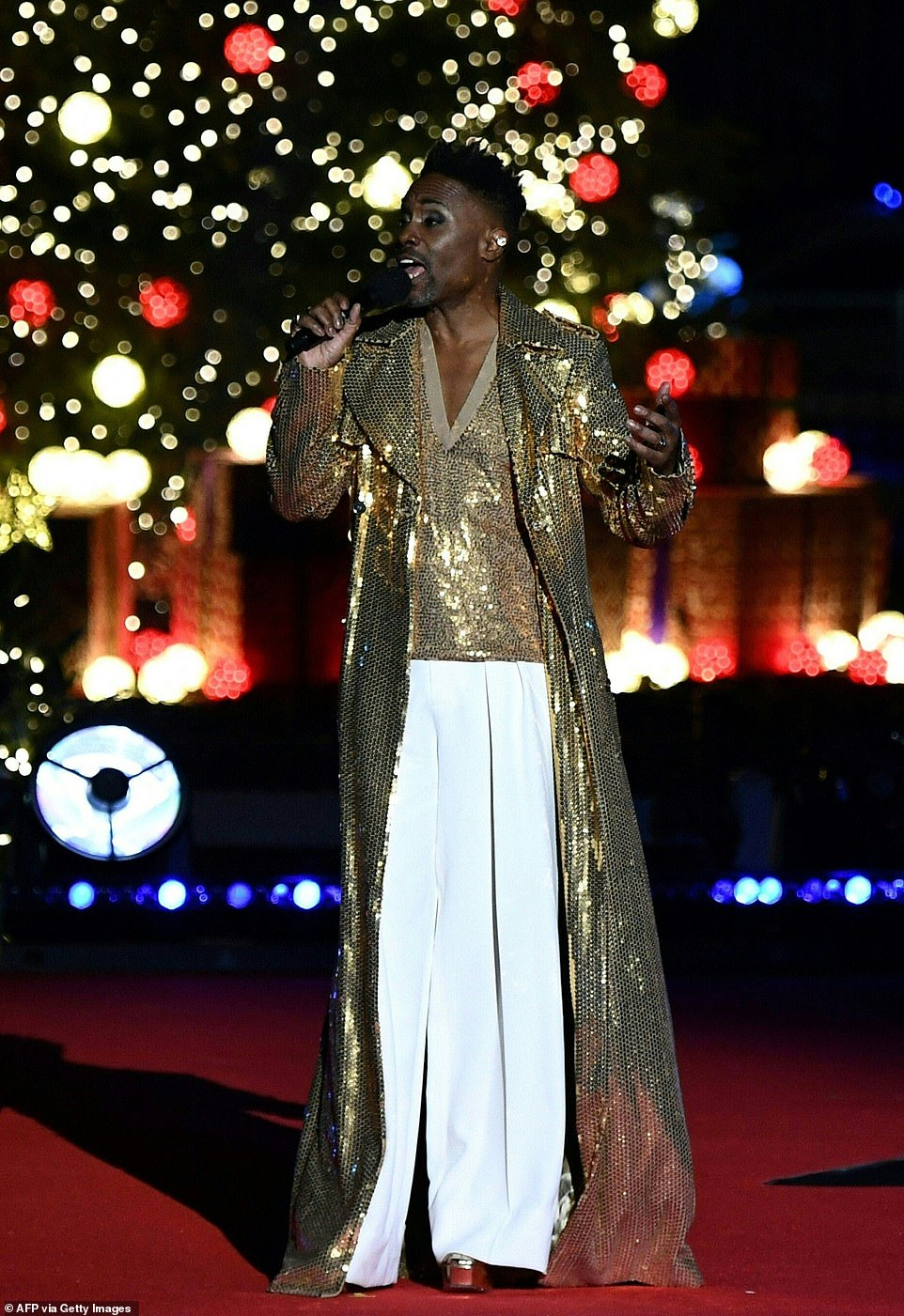 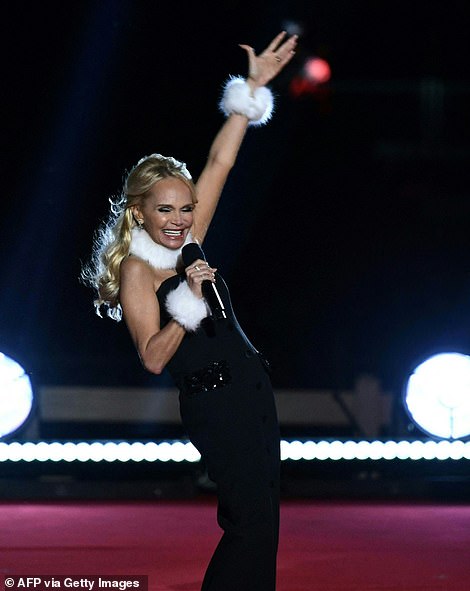 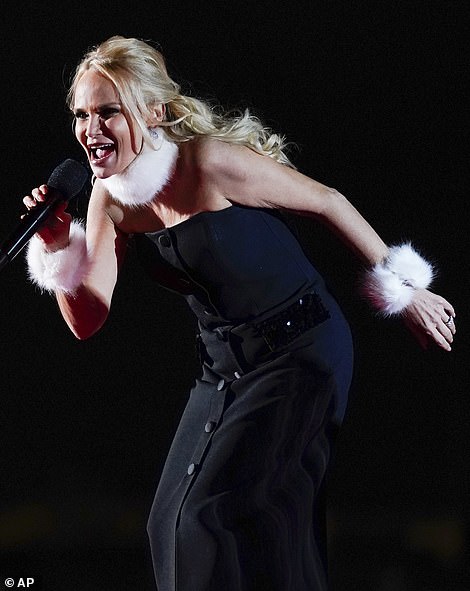 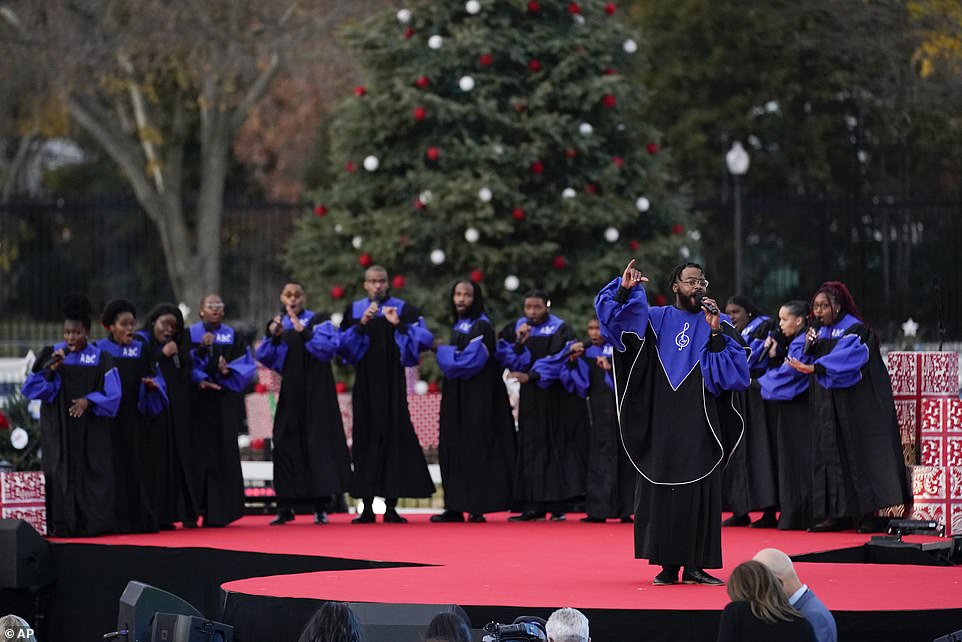 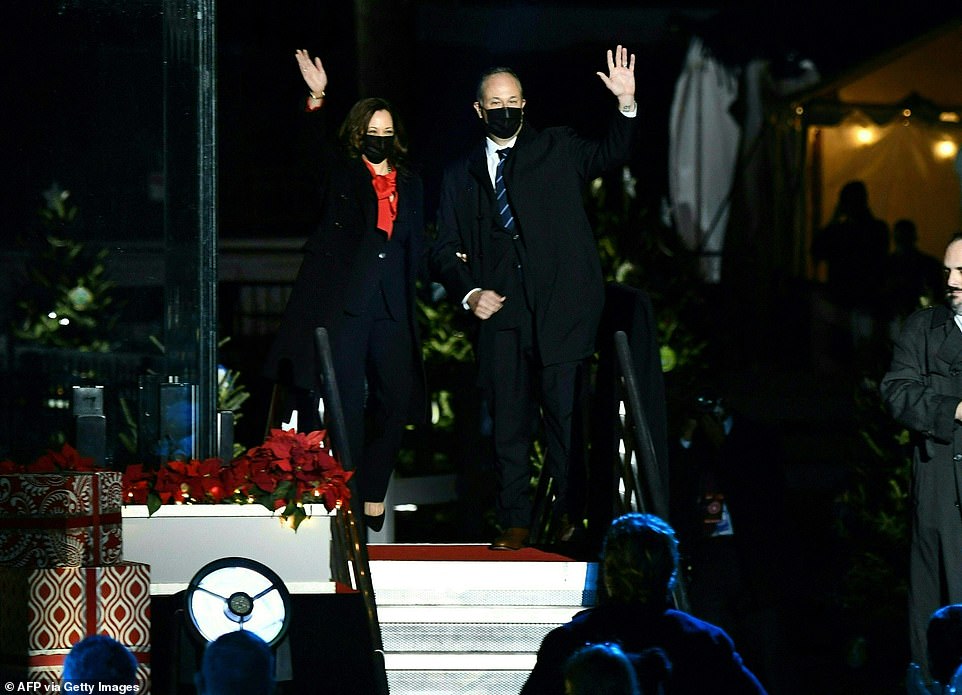 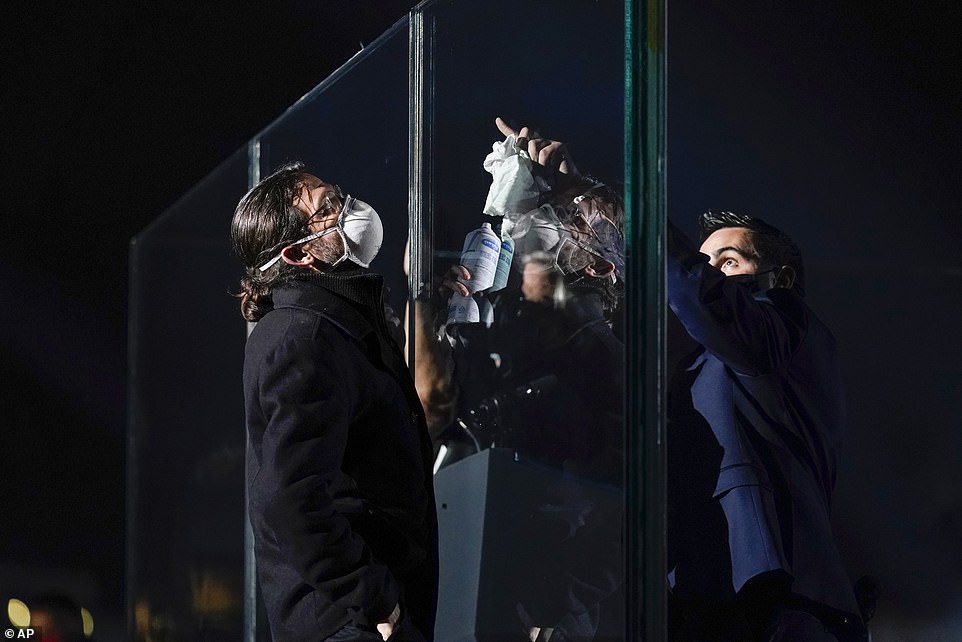 LL Cool J stayed several feet away from the president and first lady, who were kept behind glass.

‘For our safety, I am going to stand over here and social distance. I don’t want to cough on you or anything like that,’ the host said.

Later, when Biden gave a longer address to the audience, he tried to compliment LL Cool J’s physique.

‘He looks like he can still play and I’m not talking about instruments, I’m talking about football or something, man,’ Biden said.

Biden then talked about how wonderful it was to see the performers live.

‘Over the course of the past 99 years, presidents have continued this great American tradition of lighting the National Christmas Tree, through war and peace, struggle and progress,’ he said.

‘You know, for the evergreen tree reminds us that even in the coldest, darkest days of winter that life and abundance will return,’ the president continued. ‘It’s a bright beacon of hope that reminds us of the promise we find in scripture of finding light in darkness, which is also a very American thing to do – perhaps the most American of things, to find light.’

‘And it’s important to continue traditions like this one to remember that simple truth today,’ he added.

He turned to the COVID-19 pandemic.

‘For all those lost during the pandemic, we have also seen how much that there is to gain, the appreciation and gratitude of the gift of time and the light of goodwill that we share as we look out for one another,’ the president said.

‘We also have to keep in our hearts those who lost loved ones because of this virus, or any other cruel twist of fate or accident,’ the president said.

His first wife and baby daughter were killed in a car accident while out shopping for Christmas presents in December 1972.

‘We are a great nation because of you, the American people, you are good people, because of you we will never be more optimistic about the future,’ Biden said.

‘You’ve made me so optimistic,’ he continued. ‘We have so much ahead of us.’

The president quoted a Catholic prayer before signing off.

‘So Merry Christmas, America. May God bless you all and may God protect our troops.’

Before the Bidens’ arrival, singer and actress Chenoweth performed ‘The Man With The Bag.’

Porter performed directly after, singing ‘Have Yourself a Merry Little Christmas.’

Vice President Kamala Harris and Second Gentleman Doug Emhoff sat in the front row of the audience and were greeted by the Bidens after they lit up the tree.

The National Tree Lighting ceremony will air on CBS on December 5 at 8:30 p.m. EST.

You'll Want to Get Familiar With Philemon Chambers, aka Nick in Netflix's Single All the Way 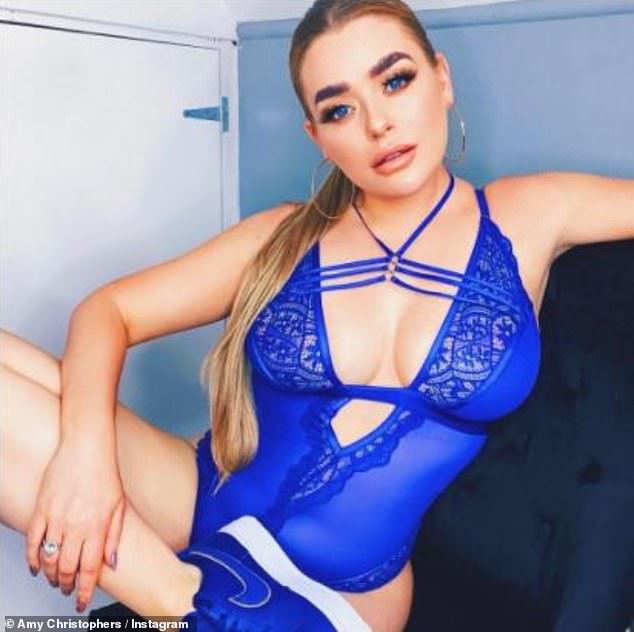 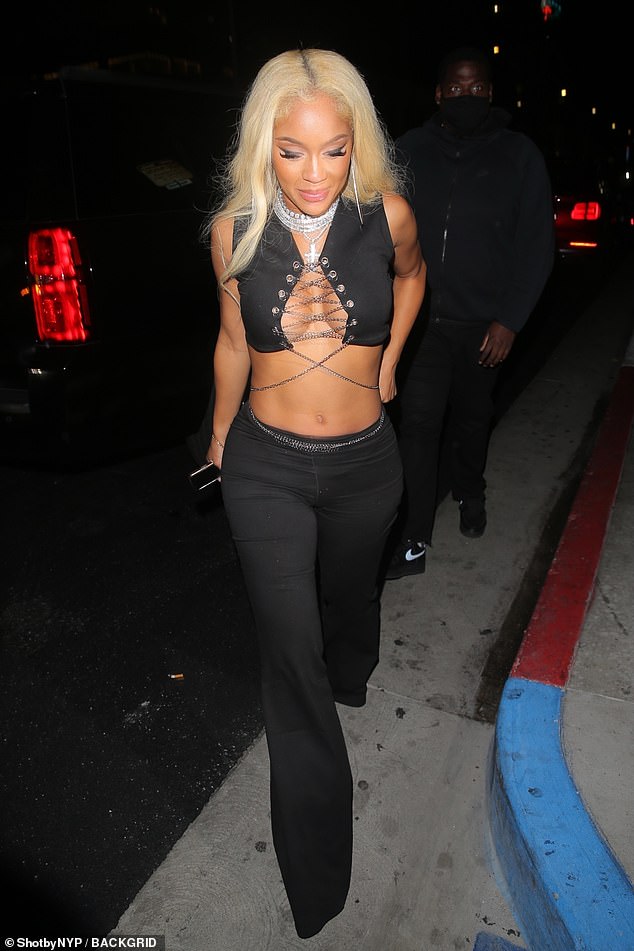 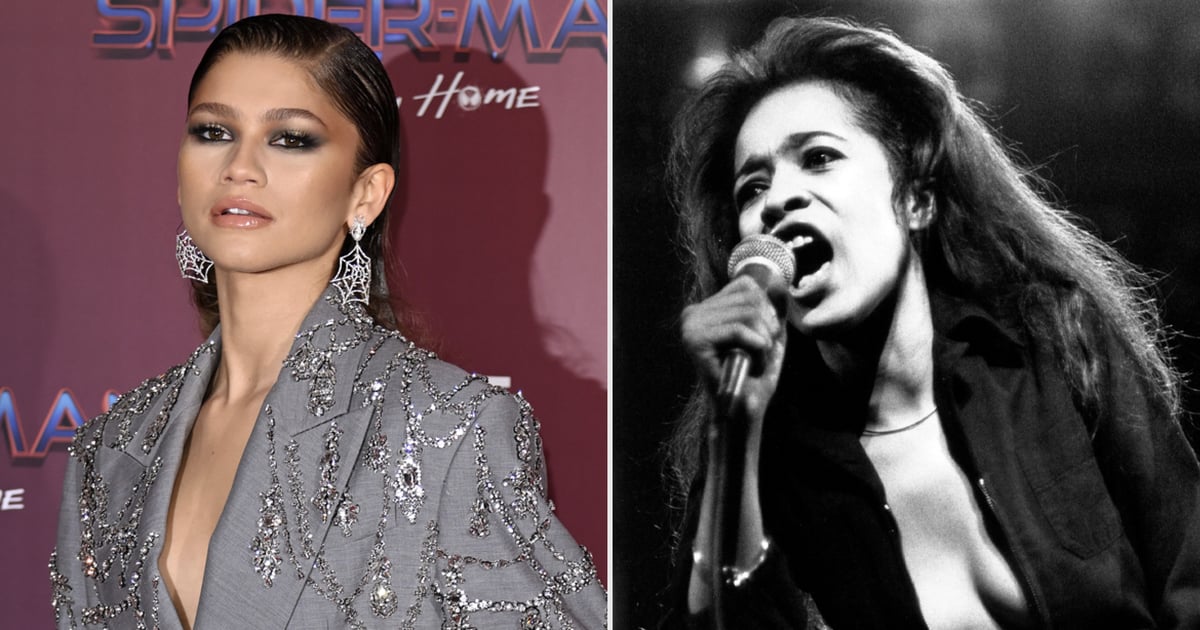 Zendaya Mourns Ronnie Spector Ahead of Biopic Portrayal: “I Hope to Make You Proud”